Driving past Loch Glascarnorch on the A835 the distinct angular shape of Cona'Mheall inspired us to research the possibility of climbing it via the enticing looking south ridge rather than the usual approach from Gleann na Sguaib. It certainly looked a feasible route from the map and the guide books confirmed that would involve nothing harder than some grade one scrambling.
Parking at Loch Droma it was a beautiful July morning as we followed the footpath from Lochdrum where the croft appeared abandoned and there were no sign of the unusual highland sheep we had preciously seen grazing in the enclosures. We stayed on the path until we reached the bealach between Meall Feith Dhiongaig and Meallan Mhurchaidh.

and then cut down the hillside to the Allt a Gharbhrain. There was a heatwave and drought across much of Scotland. The ground was dry and it was strange to see bog plants like cotton grass, growing out of parched earth. There was still an adundance of wild flowers but the orchids in particular were looking decidedly tatty. I was so busy looking at the flora I managed to fall face first into a peat hag, ar least there was no risk of drowning! Despite the drought the Alt A Gharbhrain was flowing well and we had to seek out a spot to boulder hop across. The mighty Allt A Gharbhrain

On the far side of the the river was a maze of deep and extensive peat hags, which despite their dehydrated condition still proved a navigational challenge. Beyond the peak hags there was easy walking past the long thin Loch nan Eileen with its mutiple islands bound on one side by crags of Beinn Dearg. Ahead we could was Cona'Mheall, the rocky sides of its south ridge dropping down into Choire Ghranda First view of the ridge as we pass Loch nan Eileen

The route up to the ridge is near the mouth of the coire, where a steep strip of heather runs between the crags. The edge of the crags to the right of the heather is a grade one scramble but I can't say what it was like because we climbed the heather which I swear was vertical and deserved a climbing grade of hard very heathery. Looking at the route up to the ridge It was a great relief to reach the top of the heather and find a broken path leading up to the ridge. Above the heather a path led up on to the ridge

A small knoll at the end if the ridge was an ideal point to stop and admire the views south across the fannichs and beyond. 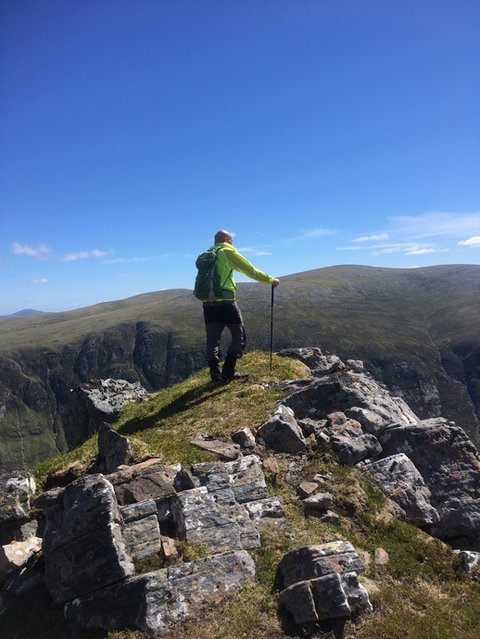 The Knoll, A Fine View Point The View Across The Fannichs

Stretching out before us, the was the grassy narrow crest, with steep drops either side and Choire Ghranda far below The South Ridge Stretching out before us. It was mostly easy walking but there was one steep dip, which we avoided via an eroded and exposed bypass path, with a bit of nervous shuffling along the narrowest section. 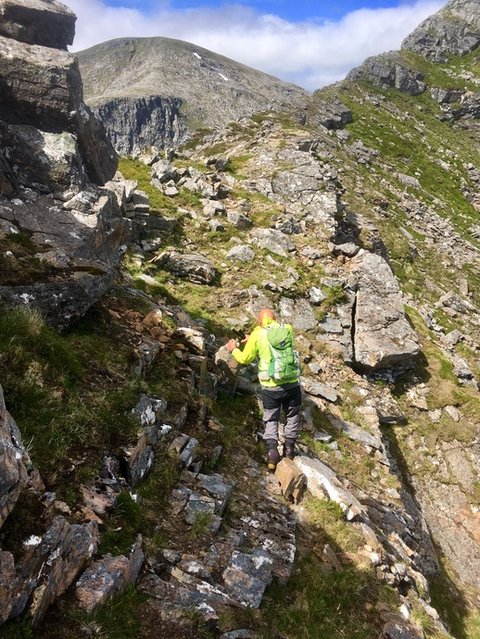 After the dip the crest was sharper with more rock and less grass, and some short sections of blocky easy scrambling. before the a grassy incline leading to the summit. Final Walk to the Summit The summit slopes of Cona'Mheall seemed perfectly designed for basking in the sunshine and enjoying the view. Fortunately they were rocky enough to allow us to brew up without the risk of starting a fire as Jeremy Jetboil came out to enjoy the views. Jeremy Enjoying the View While He Works 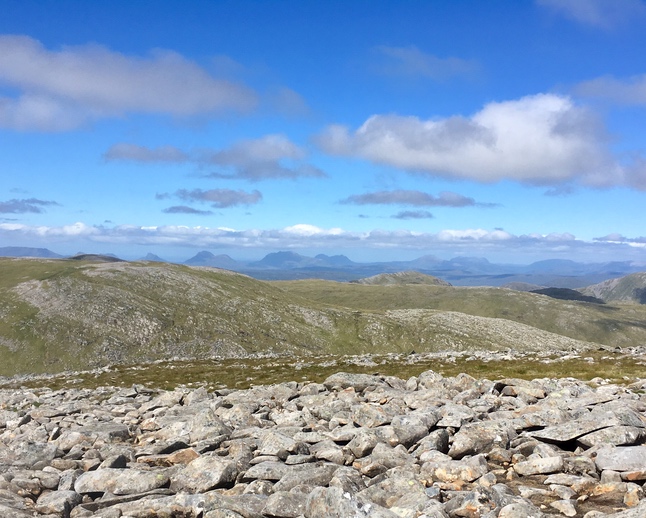 Looking Across To Assynt

Suitabley refreshed we were ready for the next stage of our adventure, the descent into Choire a Ghranda. We wanted to explore the coire but the descent appeared very steep on the map and we had a back up plan of returning via Beinn Dearg if it proved unmanagable.
The ground was very dry, making it easier than we had anticipated to work our way down on steep grass and loose rock, although had it been wet and slippery it may have felt very treacherous. The Descent to Choire a Ghranda Firm in the Dry

Choire a Ghranda apparently tranlates as the ugly Coire which is a grossly unfair! The grand corrie is a far more apt descritption with crags reaching up towards the magnificent munro's of Beinn Dearg and Cona'Mheall and the steely blue waters of the Loch filling the baisin. Although the Loch waters must have been lower than normal it did not appear parched. Walking Around The Choire

The way back was the least succesful part of the day. We somehow followed the wrong stream and were well on our way to Coire Lair before the penny dropped and we had to back track. Plus I had slipped on our steep descent and slightly twisted my knee, the further I walked the more painful it became making it a slow limp back to Loch Droma. It seemed a crime to have such a shambling finish what had been a fantastic day, but luckily the knee soon healed and when all was said and done it was a thoroughly worthwhile route.