West Drumochter 4.gpx Open full screen  NB: Walkhighlands is not responsible for the accuracy of gpx files in users posts

The forecast DEMANDED a day out on the hills, so for my first Munros of the year I chose the West Drumochter hills...looked like a relatively straightforward outing. My thinking was to bag Geal-charn and A' Mharconaich and then see how I felt with the possibility of nabbing the other two if possible.

There's a big car park just off the A9 at Balsporran Cottages. I was dressed for what was promised as the hottest day of the year so far, so it was a bit of a shock getting out of the car at 8.30 to be met by a cold, biting wind. Luckily I had a jacket in the boot, so that went straight on, and didn't come off until well into the walk! From the car park, you cross the railway line and head up a track. After a few hundred metres a track branches off to the right...ignore this unless you want to take the long route up to Geal-charn. The more direct route involves staying on the main track for a bit longer until you cross a stream...shortly after crossing the direct path appears on the right. 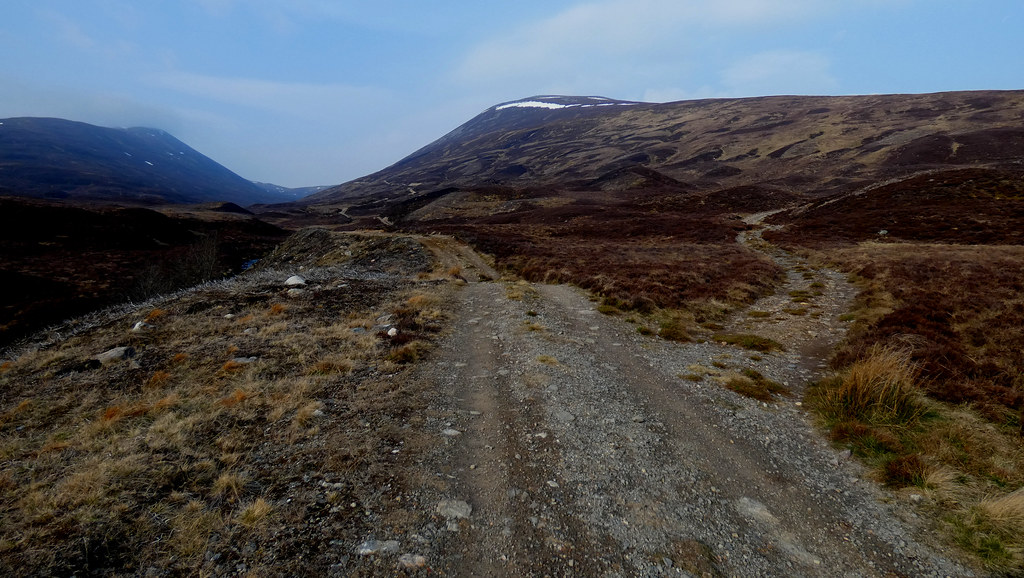 Path to Geal-charn on right

Once on the direct path - still a substantial 4x4 track - it's just a matter of getting the head down and plodding on up hill. The track comes to a sudden halt around the 600m mark and beyond that the path kind of comes and goes as it heads for the summit, but on a clear day the way ahead is obvious enough, with some cairns to help/deceive you as you approach the summit. 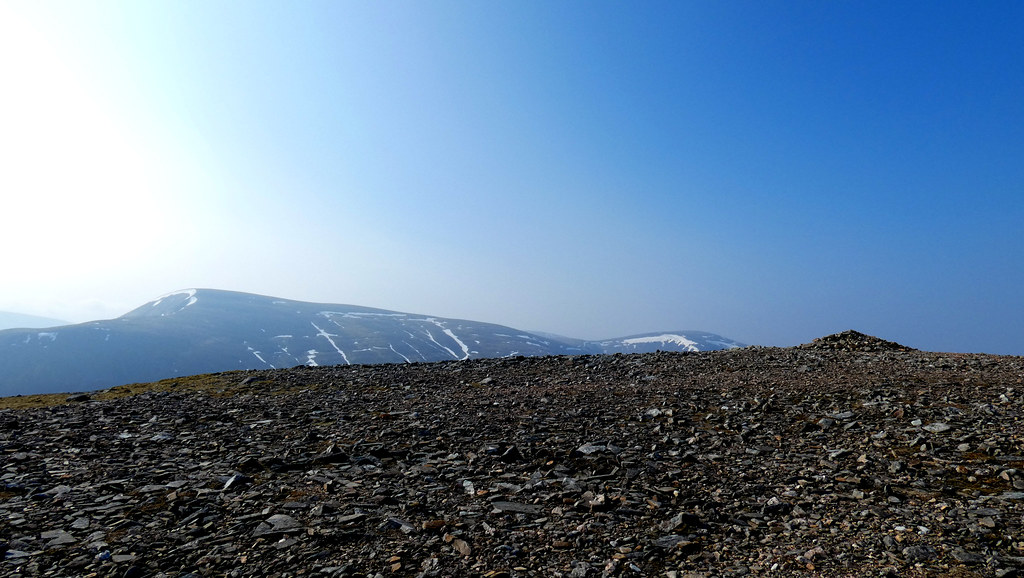 Approaching the summit plateau of Geal-charn 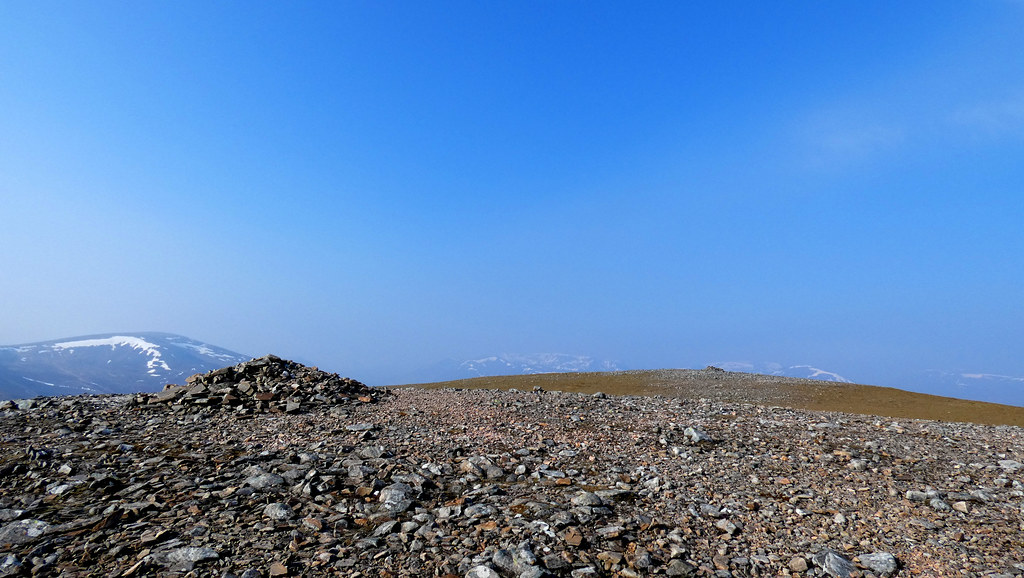 Summit plateau of Geal-charn with Beinn Udlamain behind

The summit cairn of Geal-charn is in the form of a shelter against the prevailing south winds...and luckily those were the winds we were getting today. It was a relief to be able to take a break from the relentless wind by this point, as on these rounded lumps of hills there is precious little other shelter to be found. 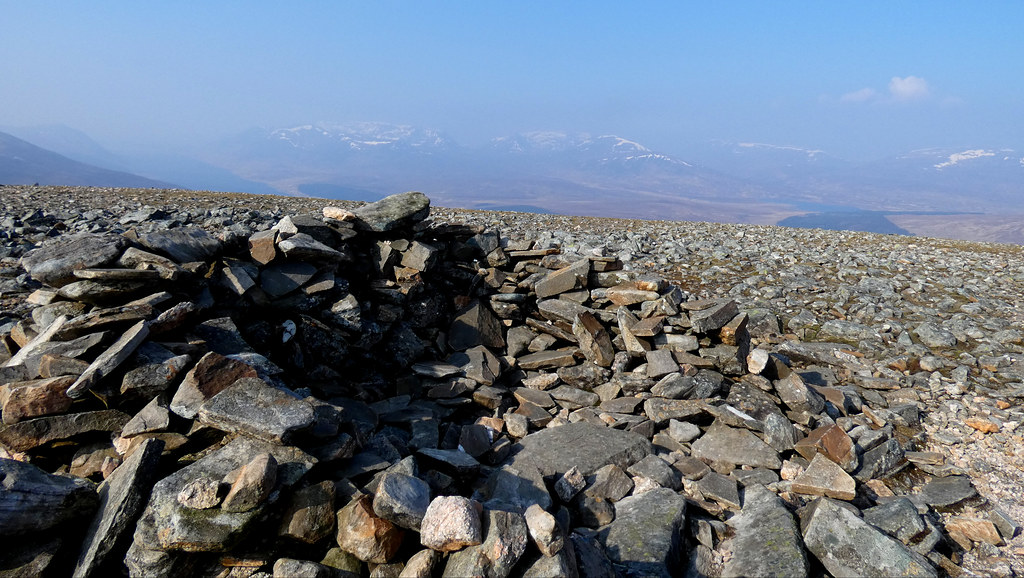 After some respite it was back into the teeth of the wind for the easy descent towards A' Mharconaich. It is a bit bouldery, but there is a clear path leading south that eventually meets up with the main track that was left earlier - I guess this would be another alternative route up. After joining up with the main track, keep following it until just before it starts to climb again at the 739m spot...there is a path that branches off to the left that will take you easily up onto A' Mharconaich. A small cairn marks the end of this path at which point turn left and head for the summit. 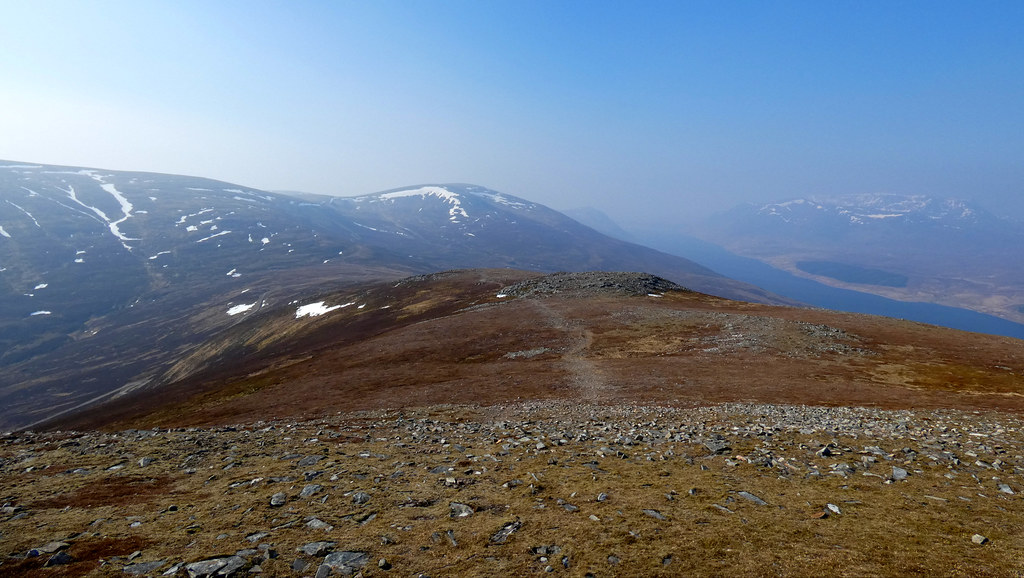 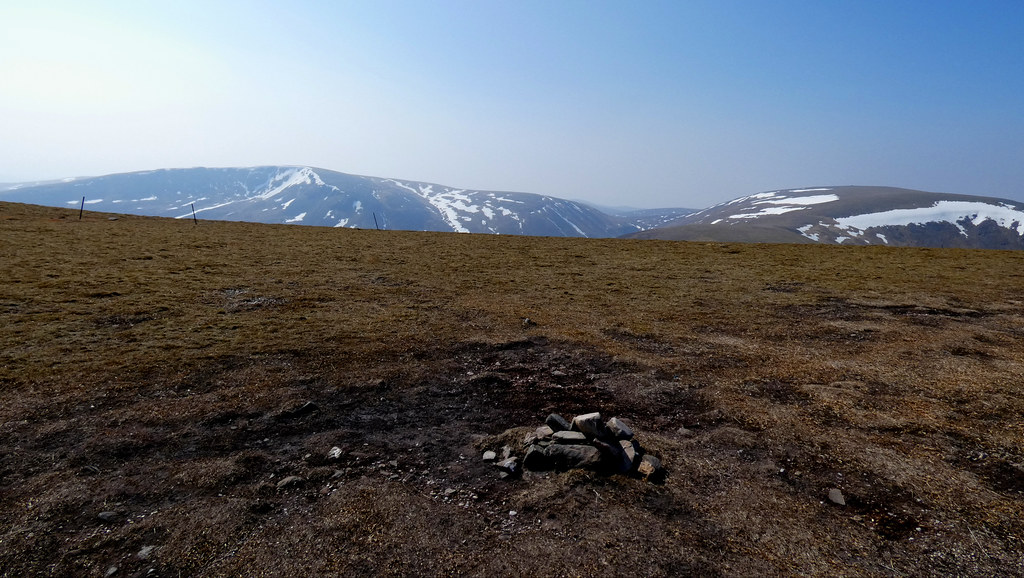 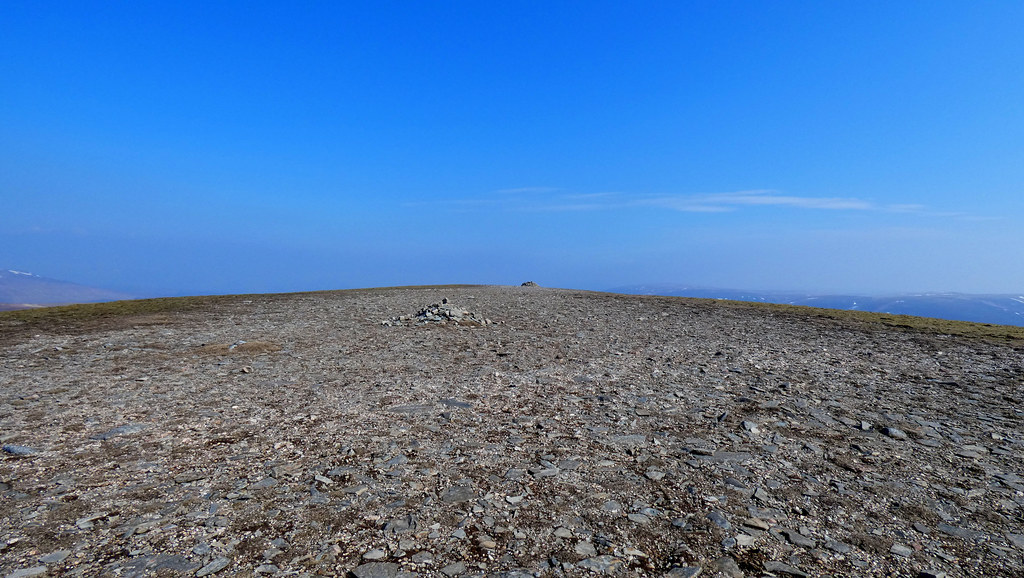 Approaching summit of A' Mharconaich

Like Geal-charn, this summit is a bit of a featureless rounded lump with a cairn in the form of a shelter at the summit. Again the shelter was very welcome as the wind was still whipping across the summits. 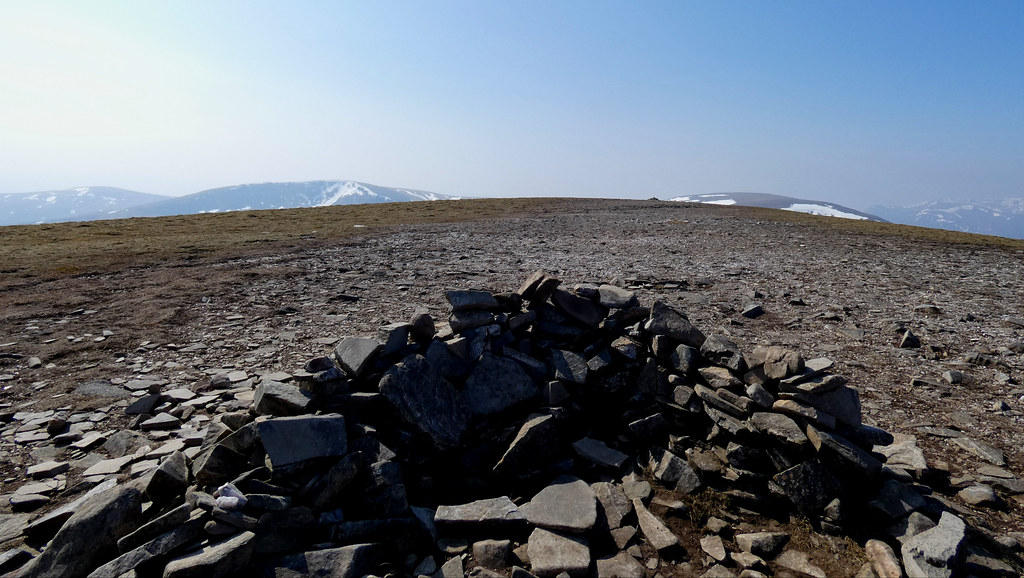 At this point it was time to make a decision about the other two Munros round these parts. I'd made good time up to this point, and looking at the map it seemed that extending the walk to take in Beinn Udlamain and Sgairneach Mhor made sense...it didn't seem to involve a lot of descending/re-ascending or any huge distances. So I decided to press on, which meant initially retracing my steps back to the wee cairn and then continuing on towards Beinn Udlamain. This basically involves following a line of old iron fence posts, so you can't really go wrong. It's another rounded lump, so easy enough going. 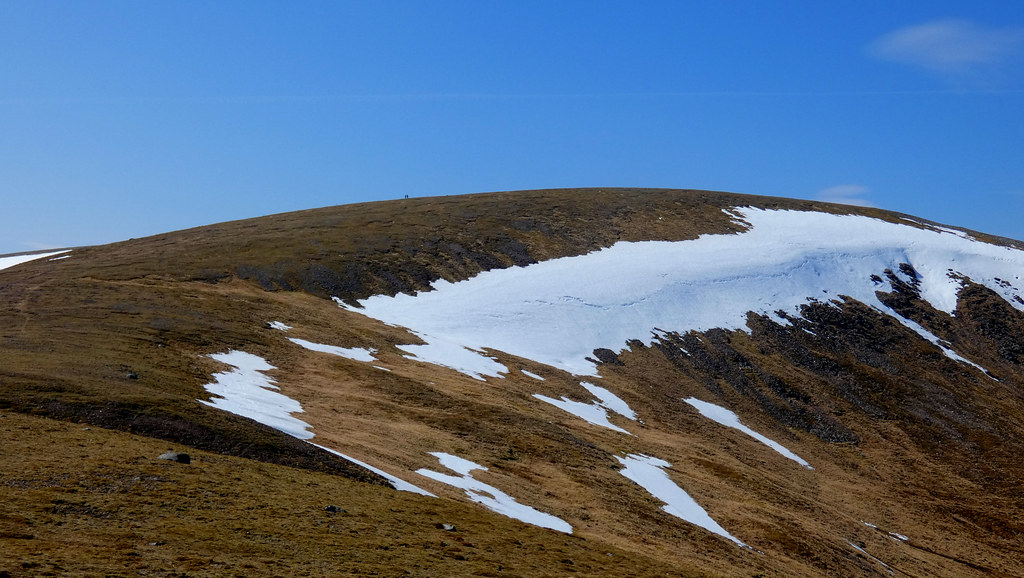 The summit cairn on Beinn Udlamain is a bit more intricate than the others in this area. It is in the form of four separate cubby-holes, offering protection from the wind whichever direction it's coming from. This seemed like a good spot for lunch, so that's what happened. There are great views of Loch Ericht and Ben Alder to be had while enjoying your picnic. 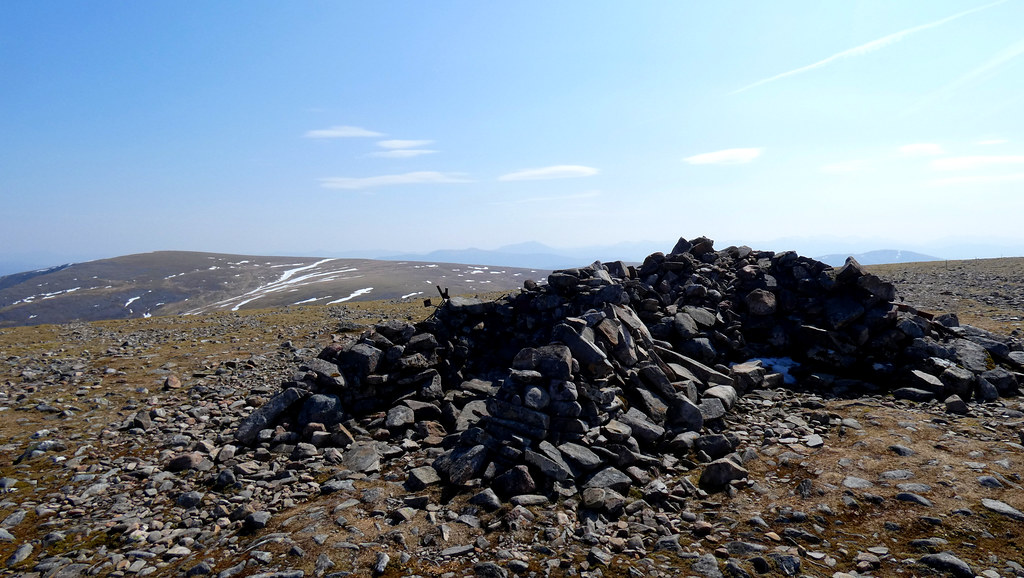 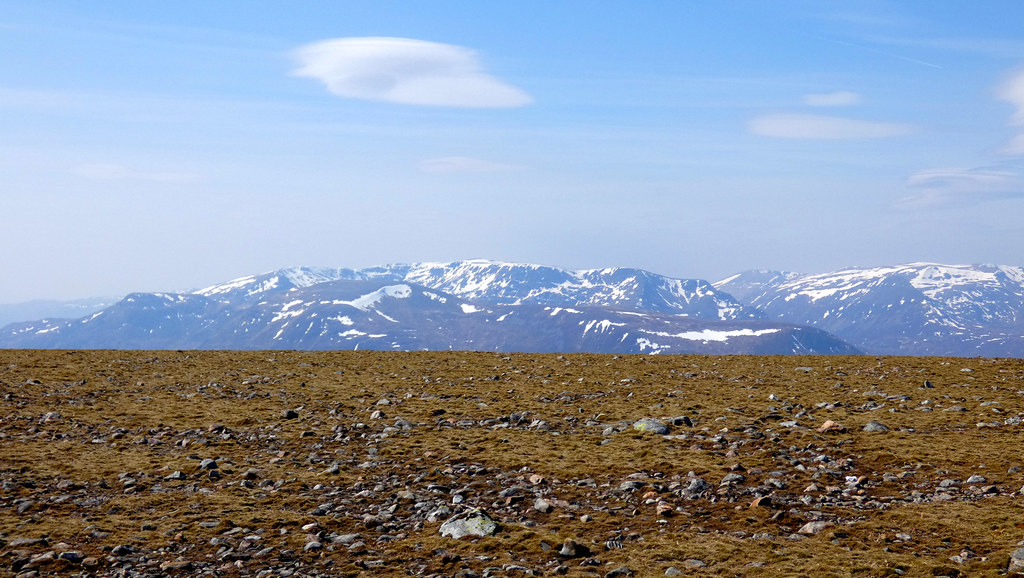 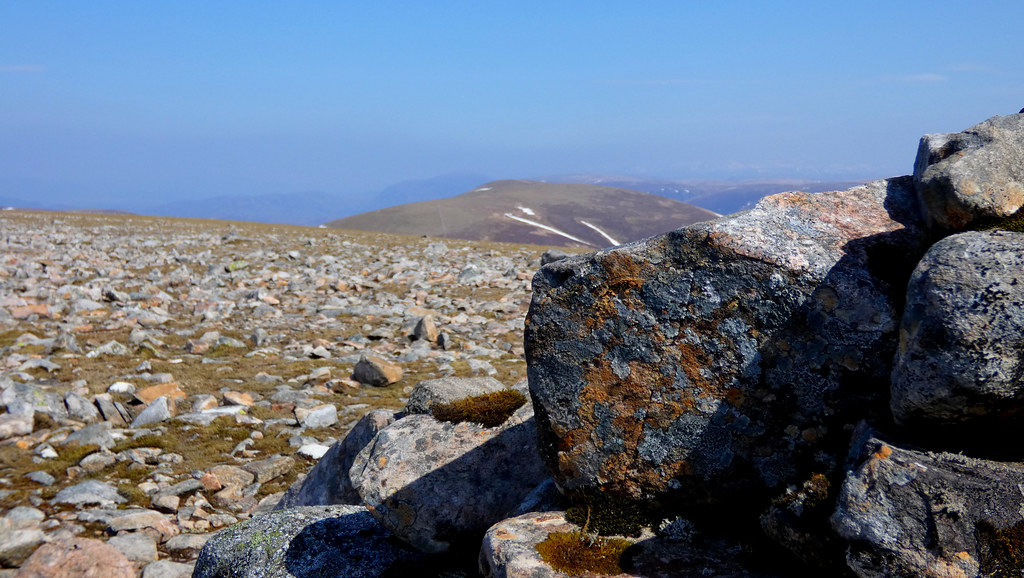 Looking across to Sgairneach Mhor - final target of the day 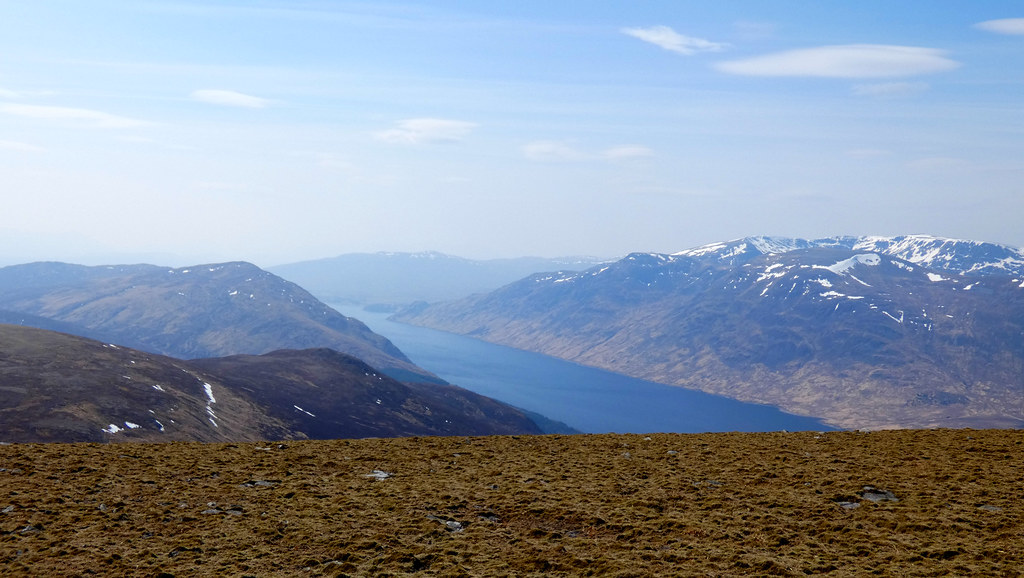 Lunch consumed, it was time to head for the final Munro of the day - Sgairneach Mhor. This is definitely the trickiest part of this walk...there isn't really much of a path, the going is the most bouldery it's been all day and it's not at all obvious where one should leave the line of fence posts and strike off to the left towards Sgairneach Mhor. I think I ended up going a bit too far and found myself ploughing through pathless, peaty broken ground before starting to climb again. Once on the summit plateau though it is very easy going on lovely, springy moss. 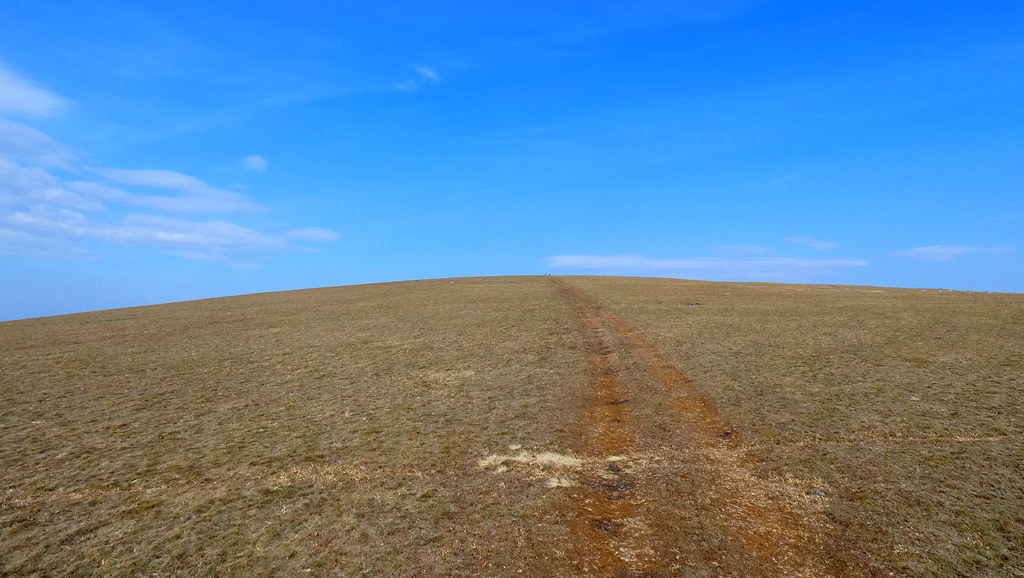 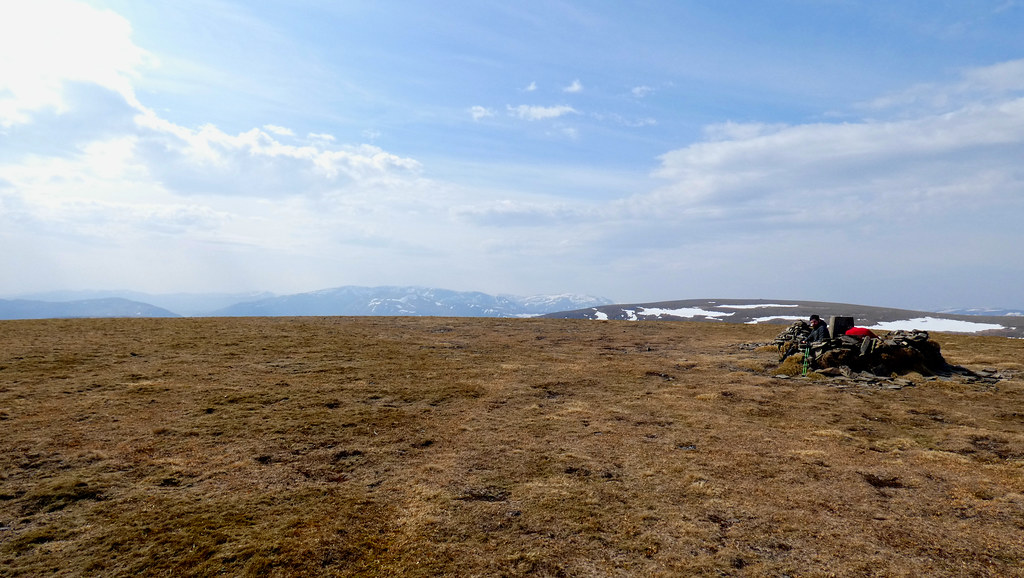 I didn't hang around on this summit, but headed down the ridge marked "Coire Creagach". There is a clear path that hugs the crags on your left and gives some of the best views of the day. Looking down to your left into Coire Dhomhain it's easy to see the track that your aiming for to take you back to the A9. 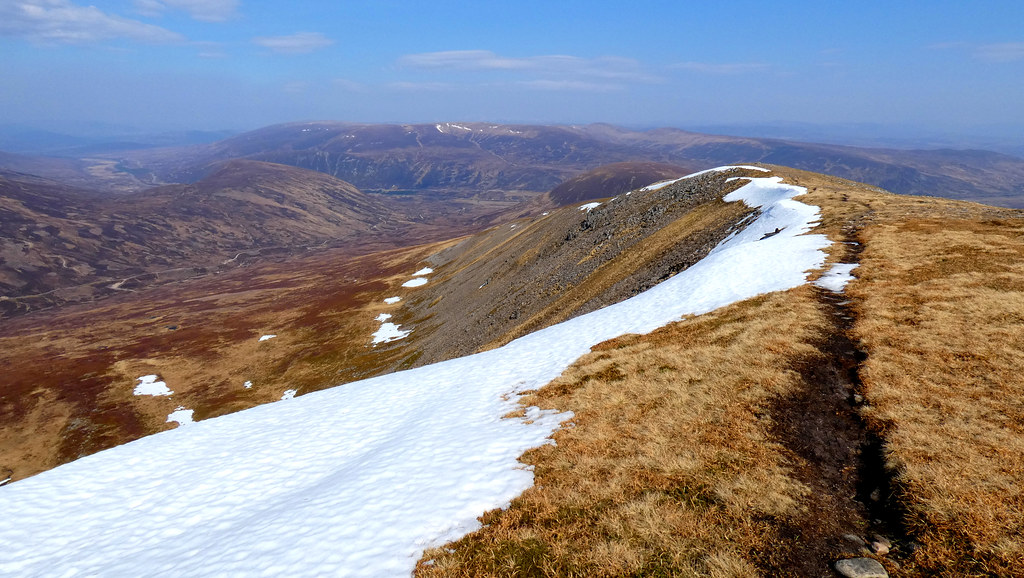 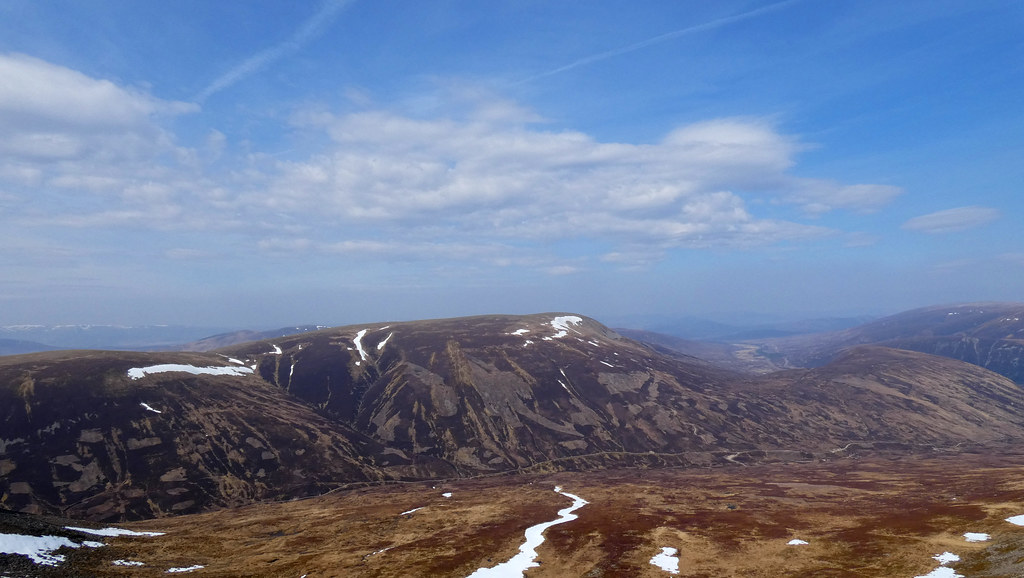 Looking down into Coire Dhomhain

After following the main path for a while I saw a fainter path heading off to the left, so decided to follow that. I'm not sure if this was wise, as it soon disappeared, but I just carried on heading down hill towards the Allt Coire Dhomhain. It was a fairly straightforward descent, helped by eventually picking up a path that ran alongside a small burn that was heading down the hill. Crossing the Allt Coire Dhomhain was not easy though. I had to scramble along the bank for quite a while before eventually losing patience and taking on a "take a jump and hope for the best" crossing that luckily just about paid off. Of course once I'd done this and gained the main track I discovered a footbridge a few hundred metres further downstream!

The trudge back to the A9 wasn't too bad, but of course there was still the small matter of getting back to the car park about 4km up the road. The first annoyance is having to walk in the opposite direction you want to in order to pass under the railway line. Once on the other side the cycle path that runs alongside the A9 is good enough, but the traffic roaring past is quite annoying, and the litter that befouls every step of the way is really, really disgusting. Anyone who chucks their crap out of the car window is a thoughtless moron - how hard is it to take your shite home with you and put it in the bin?

So to sum up...a long day on some quite boring hills and a thoroughly depressing hour-long trudge along the A9 at the end, but an enjoyable day out none the less.