We were hoping, as anybody does when we venture into the hills, that we'd get at least two decent weather days strung together, if we did then I could realise my ambition the get to my 200th Munro, on Good Friday, getting to the top of
Meall Buidhe, left me with three to get me there, I'd looked at the routes around Roybridge that had three M's included on them and it turned out to be a toss-up between the Loch Arkaig 3 or the Loch Laggan 3, the Loch Arkaig route was probably not the best one to go for considering my lack of hill fitness so we decided on the three near Loch Laggan, this too is a long day but a bit less rugged, most of the reports I'd read seem to recommend the use of a bike to get to little Lochan na h- Earba, we didn't have ours so it was going to be walking all the way, at least we'd get the legs warmed up so we decided to give it a go

I'd hoped that I would get some nice views from the top of my 200th, we've had so many days without in the past, it would be nice to get the views today

The sun was shining when we set off from the layby on the A86, it was 8.30am, there was a bit of mist hanging about but it was the type that would burn off once it got warmer 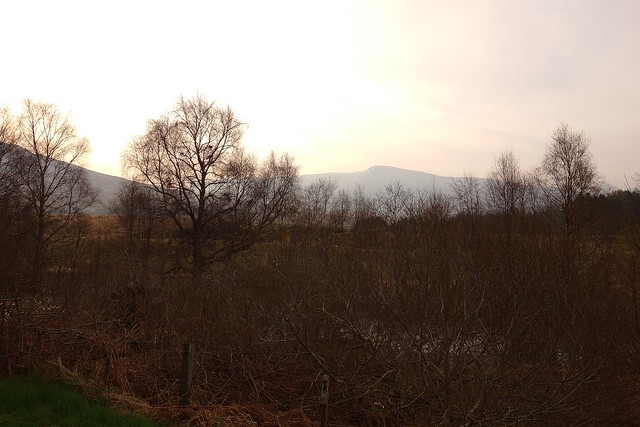 We set off over the bridge and along the track, route description in hand just to make sure we didn't go wrong, went through the gate after the first bend and started on the long walk to Lochan na h-Earba.

The track is excellent all the way to the lochan, it took us about an hour to cover the distance, less than I thought it would,
we spotted the little cairn at the start of the little short cut and we were off on our mountain adventure

Looking back to the lochan 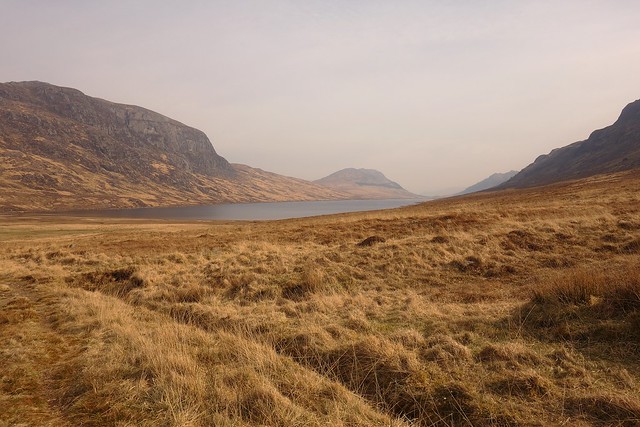 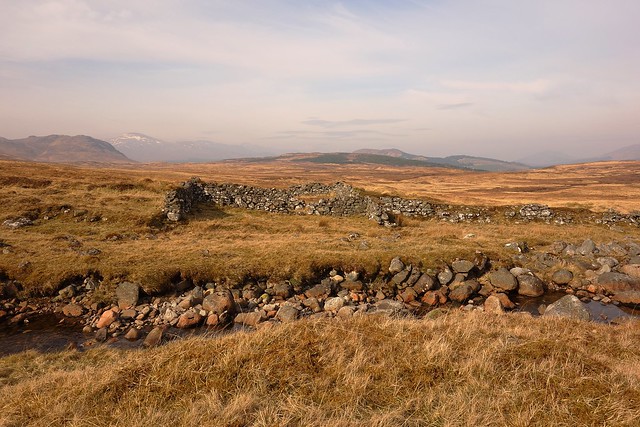 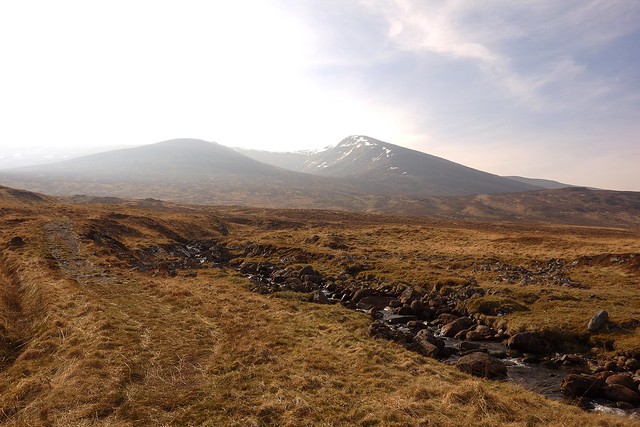 About 1.5km past the ruined shielings and further on from the ford marked on the map, there's a cairn marking the spot where you leave the track, there's a path to begin with but that soon disappears and you're left to make your own way up
Beinn a'Chlachair.

Creag Pidridh and Geal Charn from the ascent. 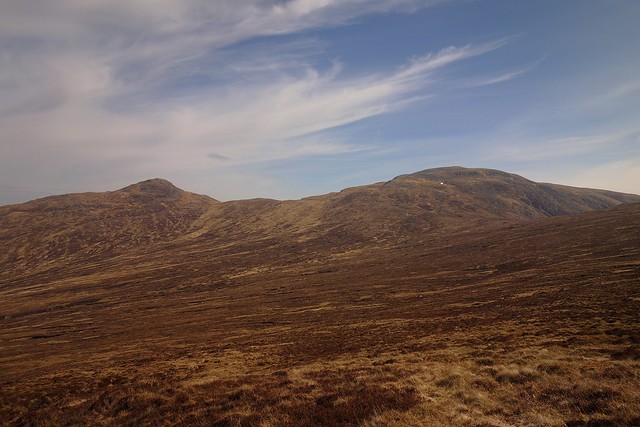 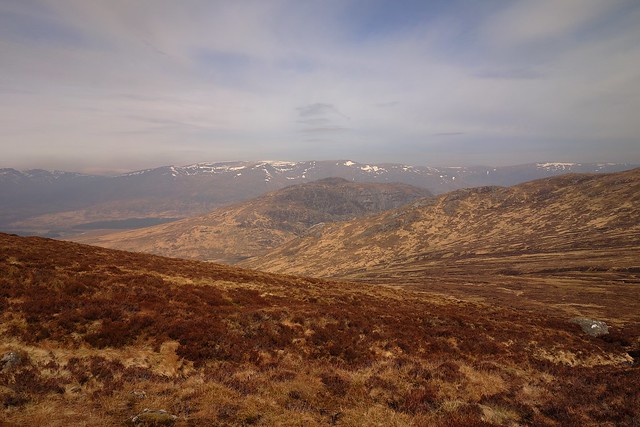 We followed the W.H route as close as possible but decided to follow the burn on its left bank and crossed it near it's source and traversed across to the rim of Coire Mor a'Chlachair, it was hard work over the tussocks but a little less steep, once on the rim we followed it round, went to the right of the "wart" and carried on to the summit.

Creag Pitridh and Geal Charn from just above the "wart" 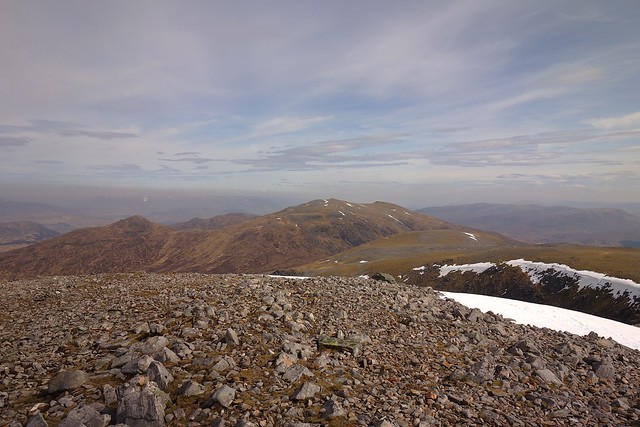 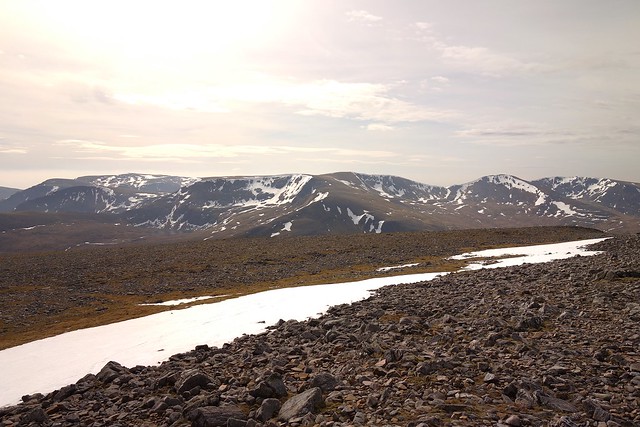 The approach to the summit is rocky so we took our time, once there the views are superb, we were so thankful to have a day like today 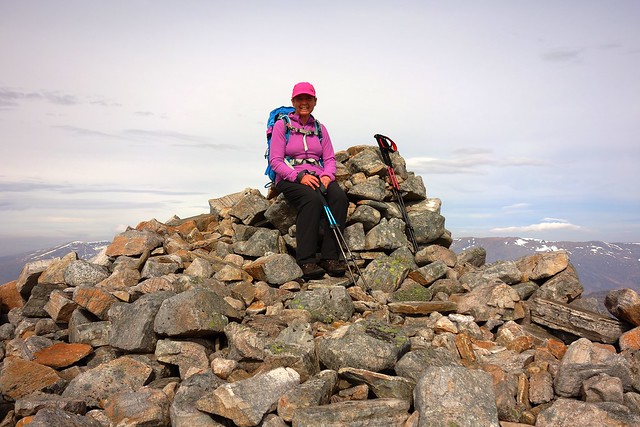 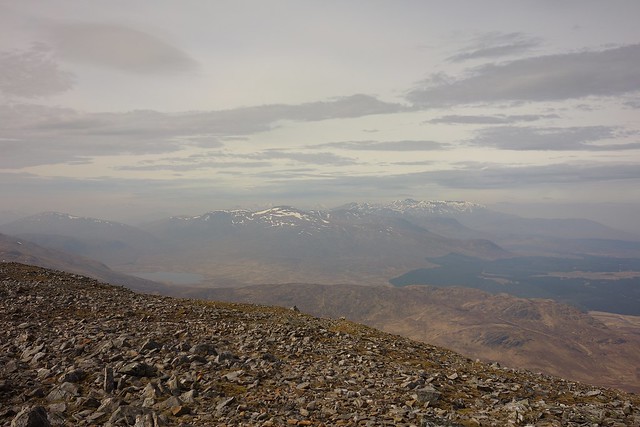 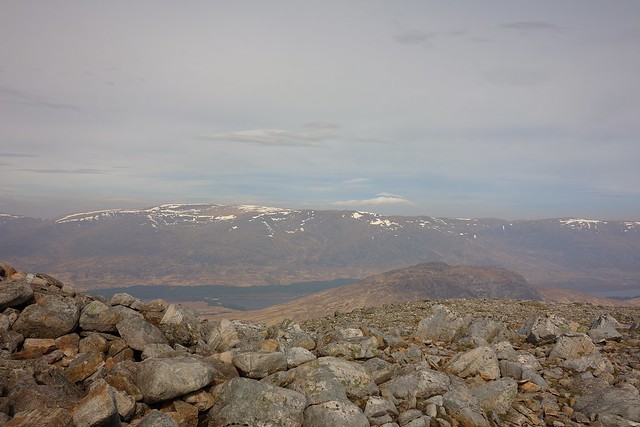 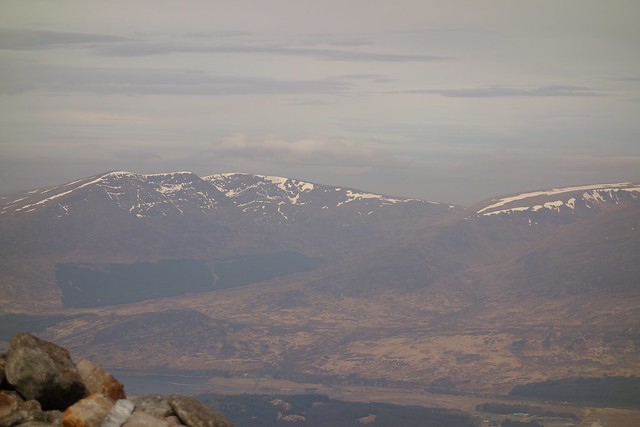 We could see Geal Charn and Creag Pitridh away in the distance, the latter was to be my 200th but, crikey, it looked an awful long way off

I had my doubts to be honest, we sat down for a quick munch then set off for Bealach Leamhain.

The initial bit from the summit was over the rocks again so easy does it, there after its a nice walk over easy terrain, once at the steep section above the Bealach the route down is very steep and care is needed to make sure you don't slip or find yourself above a craggy bit, nice and steady, no rushing, is the theme, you can see the way ahead up Geal Charn.

Once in the Bealach we followed the stalkers path to around NN490804 and left it there travelling NE ish initially, once above the steep section we could see the distinct summit cairn in the distance, adjusted our direction slightly and headed more or less directly towards it. I was finding this a bit tiring, the doubt set in again, oh no! 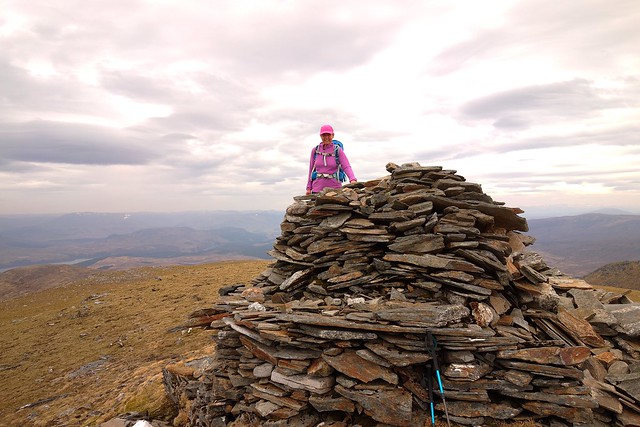 That's what we did, the views from the summit of Geal Charn are superb, the Cairngorms, the Alder group, the Aonachs, Creag Meagaidh etc all a bit hazy but highlighted with the remaining snow. 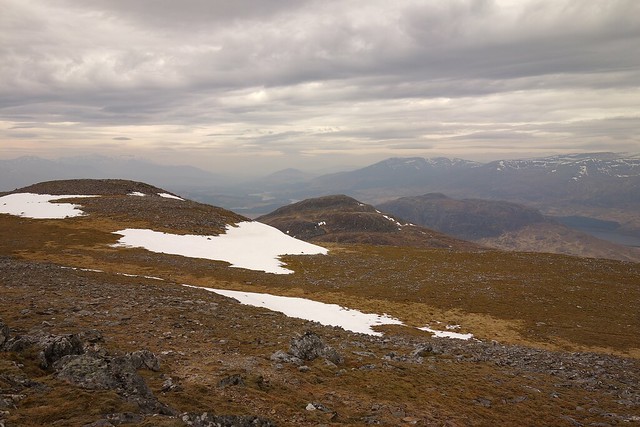 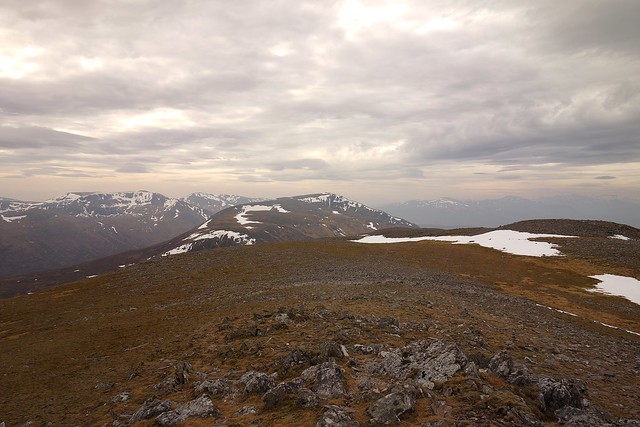 hard to believe we've just come from there. 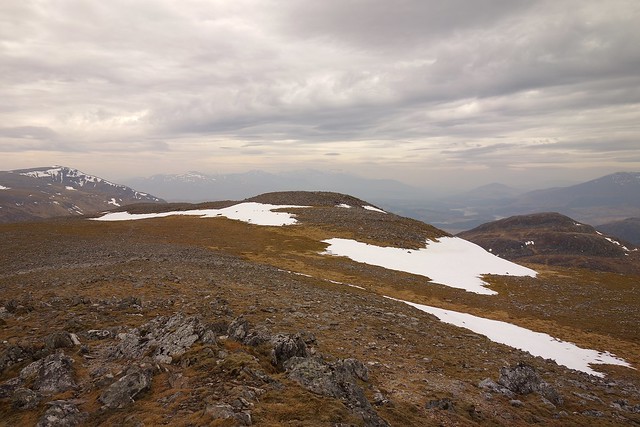 The walk down to the bealach between the mountains was straight forward even though, in my wisdom, I decided to leave the ridge sooner than we should and found ourselves in boggier rockier terrain lower down

one day I'll learn to stay on route

In the bealach there's an obvious path leading up Creag Pitridh, from here it looks a difficult climb, it isn't, its great and soon the summit is reached, Munro number 200 for me, ye haw! and the views were pretty good too 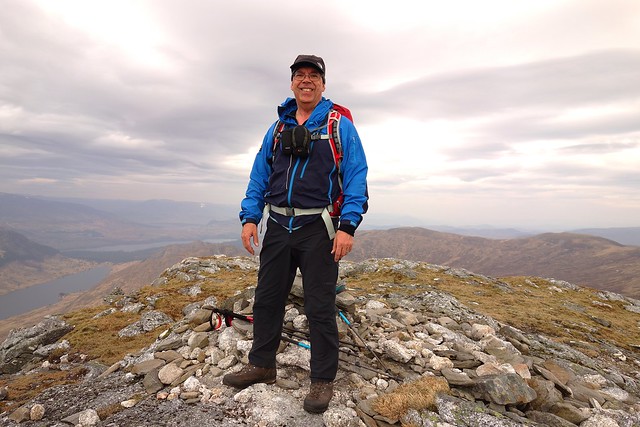 I returned the compliment. 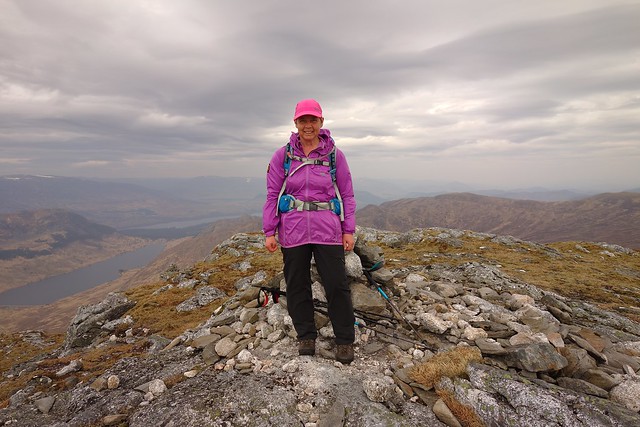 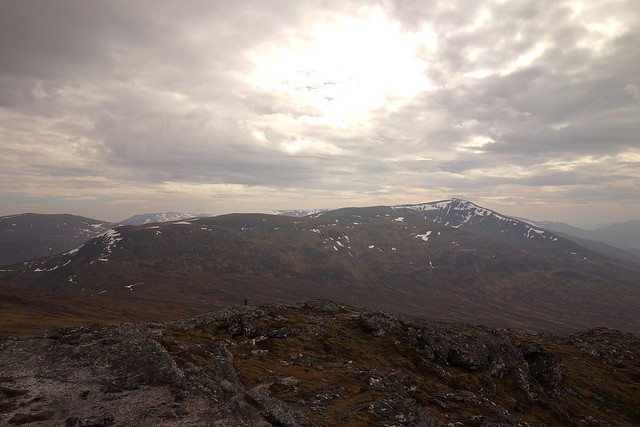 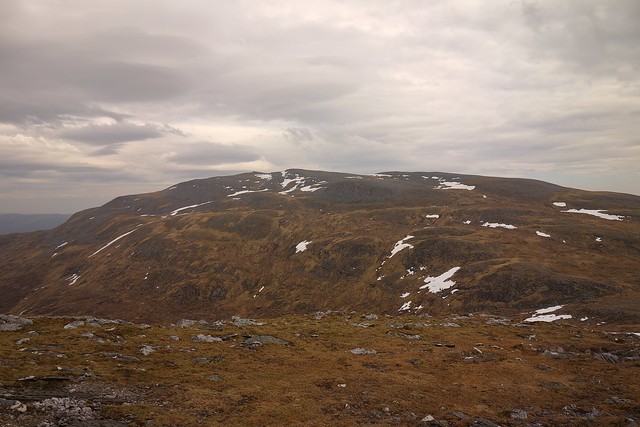 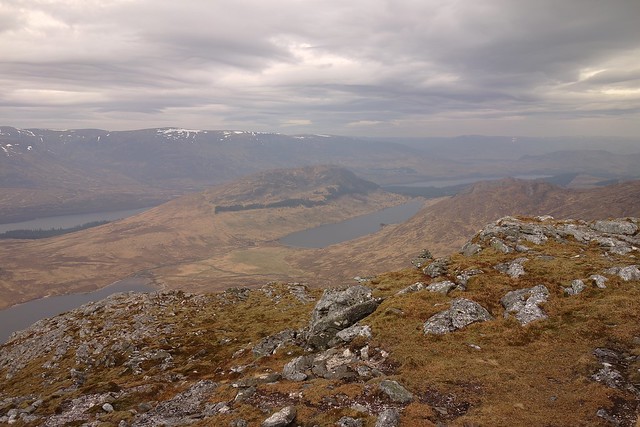 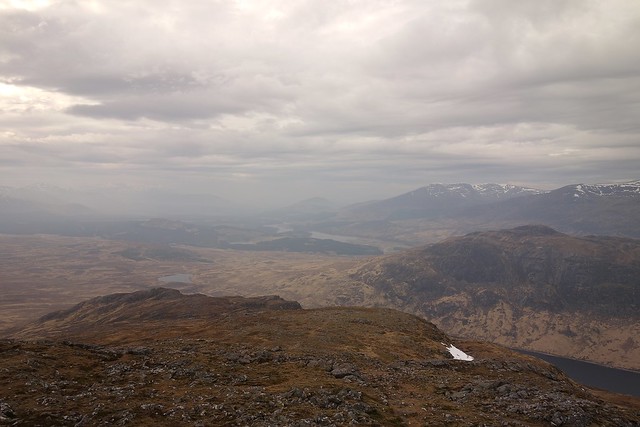 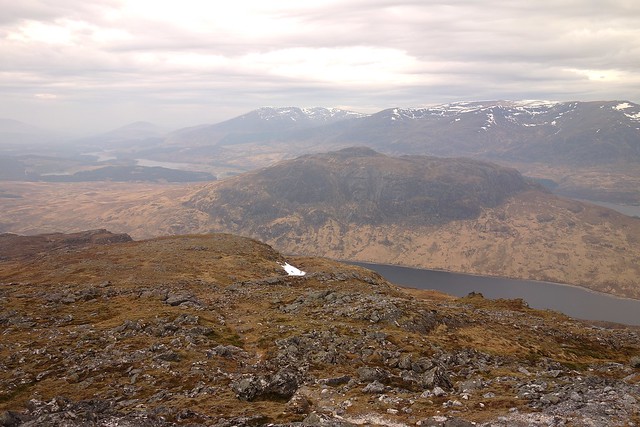 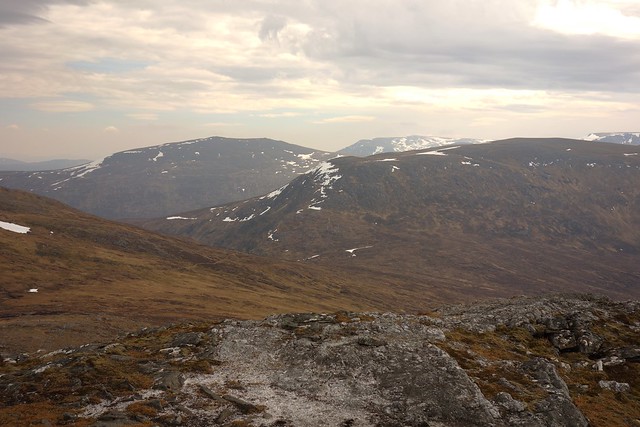 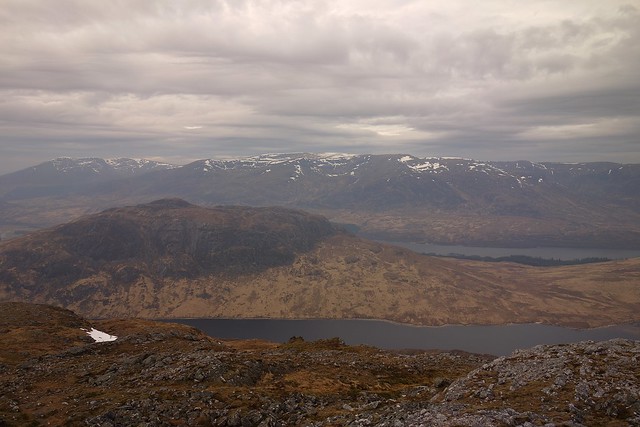 I should have had a tot of malt with me to celebrate but forgot, maybe in hindsight it was better without, especially on tired legs, even a small amount of the good stuff has an effect on me

All that was to do now was the getting down, the walk description says the descent from Creag Pitridh is on a rocky path initially then down grassy slopes, that's exactly what it is, its a bit tussocky lower down so care is needed not to turn an ankle.

The outward path is soon reached and it was a case of getting back to Lochan na h-Earba for a break for us.
At the Lochan we sat on some rocks by the "beach" (great spot

) and had a munch 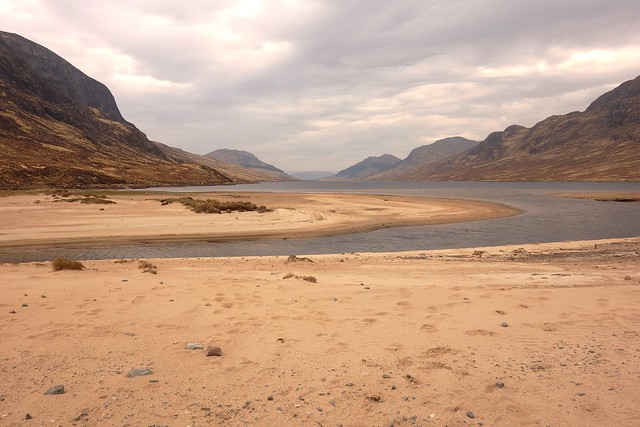 Just as we were getting comfortable it began to rain, blummin' 'ummers! up again, jackets on and off we went to get back to the car

The rain didn't last long enough to dampen the spirits but it did speed up the journey back to the car, we were almost running

Congratulations on the double century - a real big milestone on the way to the magical 282. I can vouch for the ruined shielings in your third picture as a good camping spot having pitched there back in October while out with a DofE group.

Well done Marts, that’s a great milestone especially when you consider the distance you have to travel

Of course you’ll get to the end

Graeme D wrote:Congratulations on the double century - a real big milestone on the way to the magical 282. I can vouch for the ruined shielings in your third picture as a good camping spot having pitched there back in October while out with a DofE group.

Hi Graeme
I'm happy to get to 200, at last, considering I did my first munro in 1974, I must be a good contender for the slowest round ever

The shielings were a planned spot for stashing the bikes if we used them, no need, we found out, there were bikes in plain sight all over the place

Beaner001 wrote:Well done Marts, that’s a great milestone especially when you consider the distance you have to travel

Of course you’ll get to the end

Hi Matt,
Good to hear from you, yes, we're still plugging away at them, slowly but surely

We're coming up to Roybridge again on the 18th May for a week, if you fancy getting together to have a go at some new 'uns I'm toying with the idea of a bike n hike up the four munros above Culra bothy if you fancy it?

Sorry Marts just picked up your response, yeah sure get in touch nearer the time as it be good to catch up for a hill or two. I’ve still got the same number
Matt

Congratulations on your #200 - a nice way to do it too. Thanks

Beaner001 wrote:Sorry Marts just picked up your response, yeah sure get in touch nearer the time as it be good to catch up for a hill or two. I’ve still got the same number
Matt

Cheers Matt, will do.

rockhopper wrote:Congratulations on your #200 - a nice way to do it too. Thanks

Thanks rockhopper,
We're up again later this month, hoping to get Denise to her 200