After taking the 10.30 ferry from Mallaig we set out along the road SW from Inverie then took the track signed for Lochan Dubh-Lochan. After 3km pass the prominent monument then take the smaller track right after about 200 metres. Follow to cross the Inverie River and continue E along track to footbridge below Druim Righheanaich. Here we started to climb N/NE up a steep grassy incline aiming for the ridge line. It was midday at this time and extremely hot, so the hard climb with an overnight pack meant a lot of sweating, which I never really replenished the rest of the day as there was no water once we started to climb. Once on the ridge we followed this to the summit of Meall Buidhe and stopped for lunch and a photo. 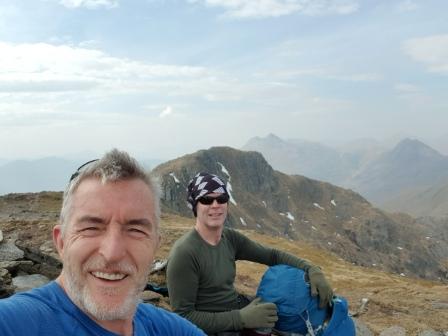 The next leg of the trip was a descent of the NE shoulder to the Bealach lle Choire then following roughly the same line of undulating terrain until we reached the Bealach a' Choire Odhair.
Then came the second real climb of the day up the SE shoulder of Luinne Bheinn, and whilst only a couple of hundred metres I found it a real struggle.
At the summit we paused briefly for a photo, as we wanted to press on to our overnight objective and the weather had started to cloud over. 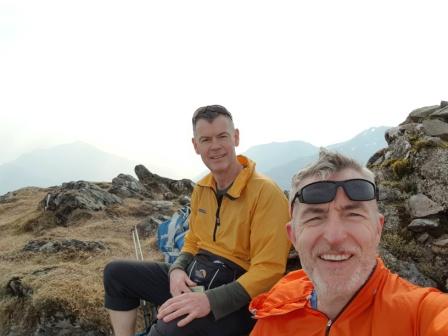 A long descent followed NW to Mam Barrisdale where we picked up the path that continued to descend NE towards Barrisdale Bay and the bothy at just after 6pm.