A wee walk on the night of my 37th birthday. Headed off to Ben Donich after finishing work in paisley @ 5pm and raced off to the Arrochar Alps. As we got to the car park at the top of the rest and be thankfull roadworkers were preparing for works to begin at 9pm meaning that if we were late we were in for a very big detour. I was joined By Jim O, Tam mac, Tommy S and Jim`s mate Stuart for his very first hillwalk. With Jim setting the pace we virtually raced up the mountain hoping to get high enough for some decent views before he had to get back down again. Summiting this hill wasn`t guaranteed but as I tried to keep Jim in sight i kept pushing myself on rather than just enjoying the walk. Only the 3 of us made it to the top and after a quick couple of photos we headed back and with Jim and Tommy in training for their half marathons the bolted off back down the hill leaving me trailing behind

At one point i actually thought i had gone the wrong way because i didn`t recognise anything because of our mad dash up the hill, never will i do that again, i vowed. Eventually made it down in time for the work hungry yellow jackets to slam the road closed signs down behind us a s we sped off home.

i will return to this mountain and take my time to enjoy it. 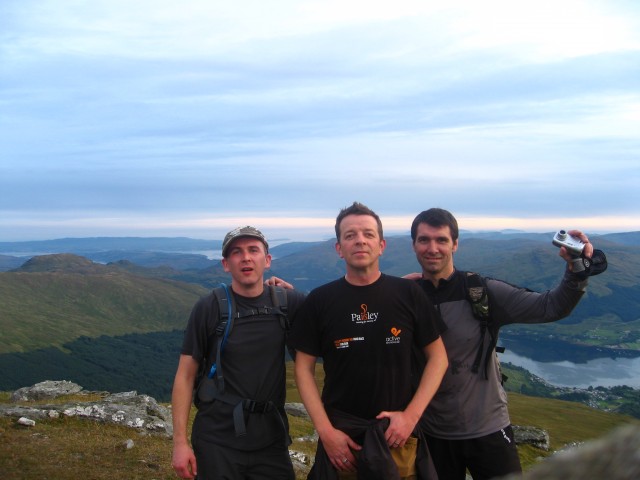 A fine way to spend a birthday tomyboy!

It's a hill I've long had my eagle eye on, along with the Brack, but never gotten around to it yet.