Having done the short walk to Auchterhouse Hill on a pack walk with Moss, I decided to return for the full circuit with Coinneach who isn't well behaved yet enough to go on a pack walk! 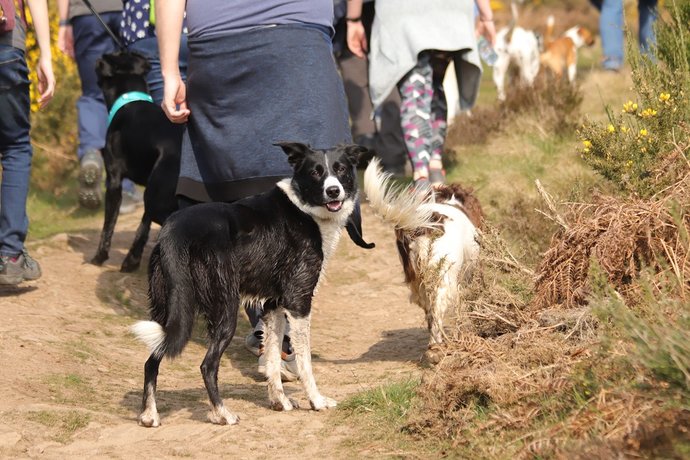 Moss on the pack walk

We parked up in the car park and set off following the path through the trees and along to a gate (the first time I did this walk it was a stile over a wall so this has changed making it much easier). Following the grassy track to a wider track that led up across the hillside with yellow gorse on either side. 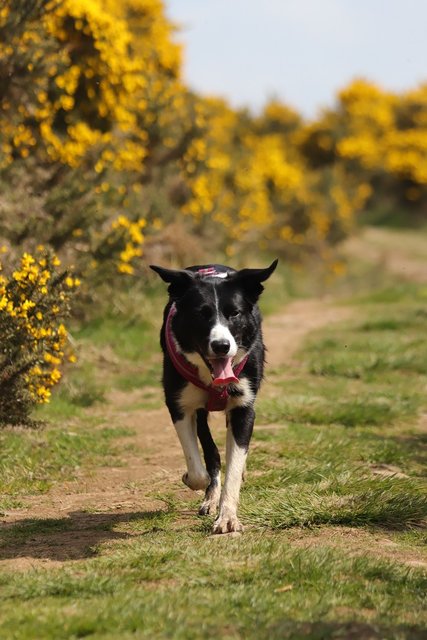 Through another gate onwards and upwards towards the summit of Auchterhouse Hill. I love the trees up here! 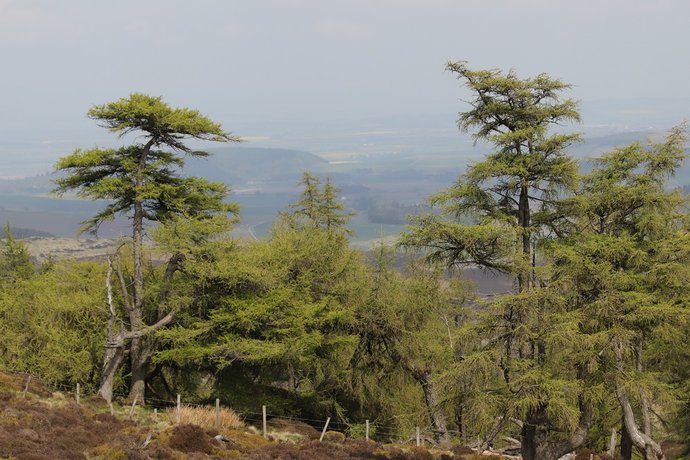 There was once an Iron Age fort at the summit but there isn't much to give away it's previous route. Across we could see Kipurney Monument but the haze prevented any long distance views. Still, the dogs don't care Moss decided to celebrate by having a good roll! 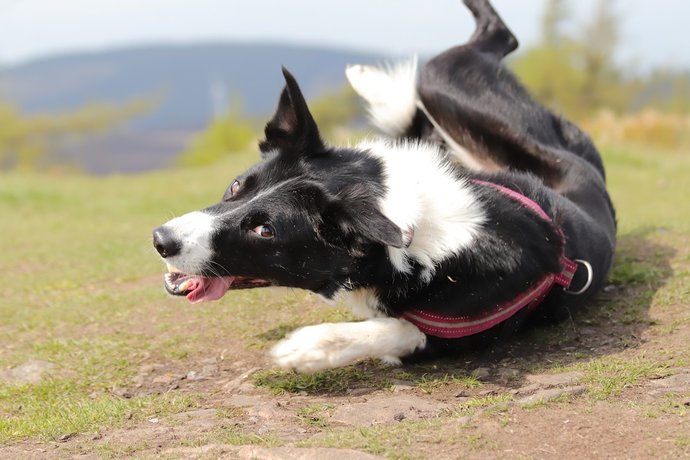 We took a different track down circling round to rejoin the ascent track following it down towards a fork - diverting briefly as the dogs found a nice muddy ditch to roll around and cool off in. 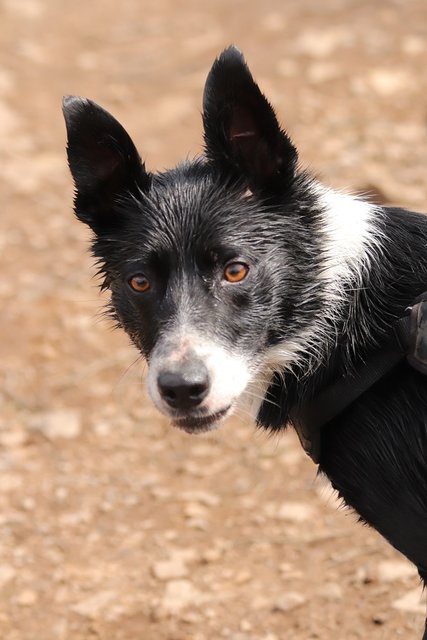 Taking the fork, we continued to descent towards a gate the path up the Balluderon Hill very obvious to see. It is a bit rocky and stony in parts but we reached the summit, didn't hang around though there were a couple of other people there with a dog so we just continued on leaving the main track for a narrower path through the heather that follows the fence-line down to a dip before the path starts to ascent the final - and the highest - summit of Craigowl. 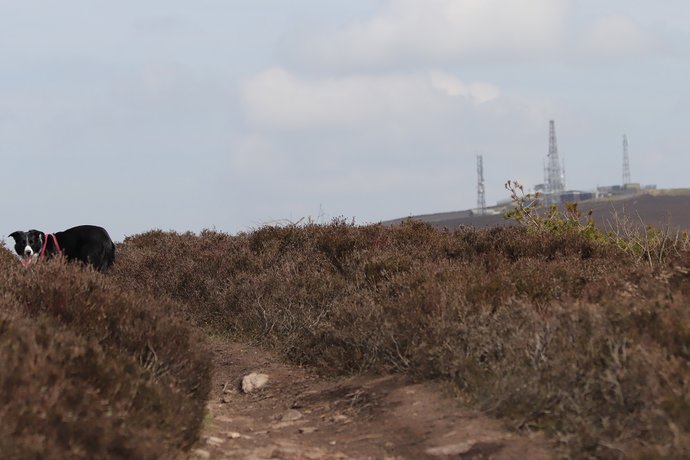 Hard to miss this one, it is topped by transmitter masts and though it may be the summit Coinneach can tick off on his list (which he doesn't have, he is a dog and doesn't care) it isn't the most attractive. But first we had a fence to deal with. BE WARNED THE STILES OVER THE FENCE ARE VERY WOBBLY! One has been completely destroyed so two need to be crossed to go over the fence, or the much easier option is to just go between the wire. 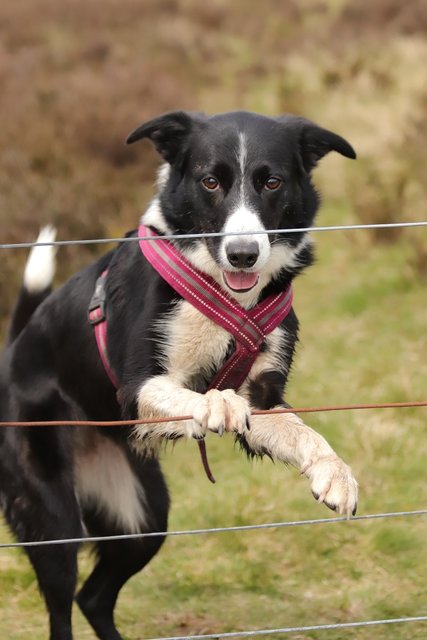 To reach the trig point another wire fence needs to be crossed, again it is a case of clambering between the wire. The trig point is surrounded by the transmitter masts and all the associated buildings. Not the best of views. 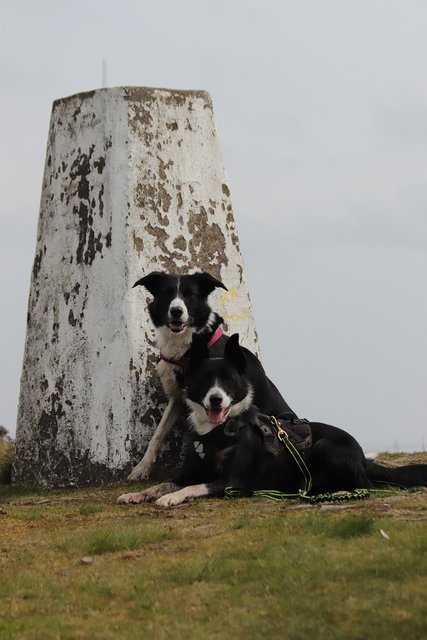 We retraced our steps back down to the damaged stile fence and took the grassy track to the left following it down the side of the hill. There are signs of both sheep and cattle around, though none were out today it is something to be aware of especially if walking with a dog. 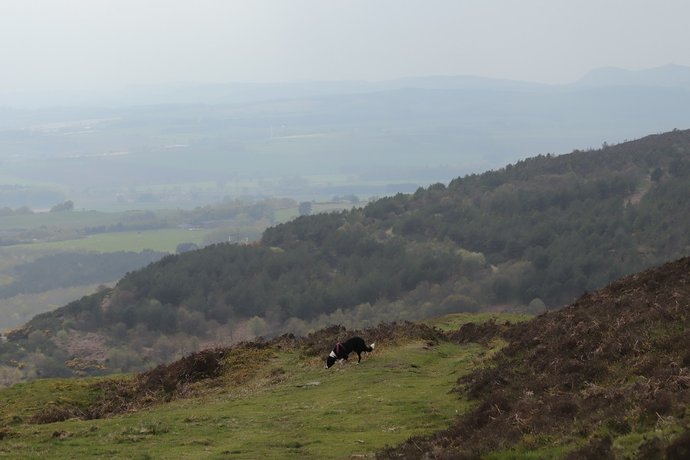 At one point there is a steep section heading down, but it is easier to continue on the faint grassy track above that loops round to join what is obviously sometimes a very muddy farm track! Today though there were only a few small muddy patches. 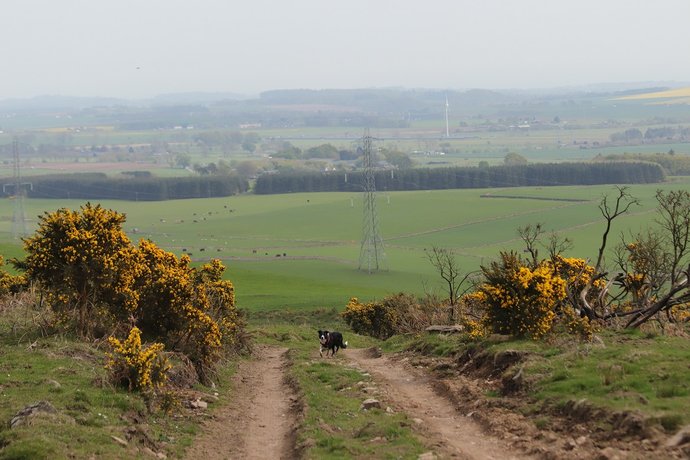 The track leads down curving round and at one point curves close to a fence with a gate, this gate leads to one of the tracks around Balkello and from there it is a case of following the track (which does have handy signposts) through the woodland down to the car park. 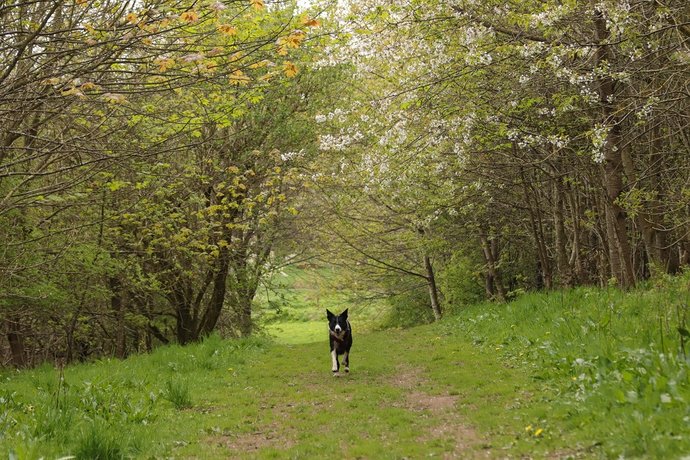 nigheandonn wrote:I love the picture of Moss with her paw on the wire

She was trying to find a way through after I crossed on the very wobbly stile, the wire is wide enough for her to get through.

A very special place for me. Nice to see pictures again, especially with the dogs!