The full round of 5 Corbetts on the eastern side of Glen Orchy is only for the strongest walkers. We decided to divide them in two groups as WH instruction suggests. I guess, on a long summer day, we could attempt them in one go, but I'd rather save my knees for the remaining 34 Munros (most of them are long, remote walks!). Besides, if doing a day trip, we have to add 5 hours in the car just to get there and back. So splitting the five in half was the reasonable thing to do.

WH route begins in Tyndrum, but we preferred to start from the car park in Dalrigh (also the starting point for Glen Cononish approach to Ben Lui). We walked on WHW for a short distance, left it just past Tyndrum to climb Beinn Odhar first, traversing to Beinn Chaorach and eventually to Cam Chreag, with return via Gleann a' Chlachain. Even just the three Corbetts add up to nearly 1400m of ascent, a lot of it steep. My knees were howling mad afterwards

Track_BEINN ODHAR3 11-04-19.gpx Open full screen  NB: Walkhighlands is not responsible for the accuracy of gpx files in users posts
It was a sunny, warm morning and West Highland Way was busy with walkers. The hill looming behind me is our first target, Beinn Odhar. Beinn Dorain more distant to the left: 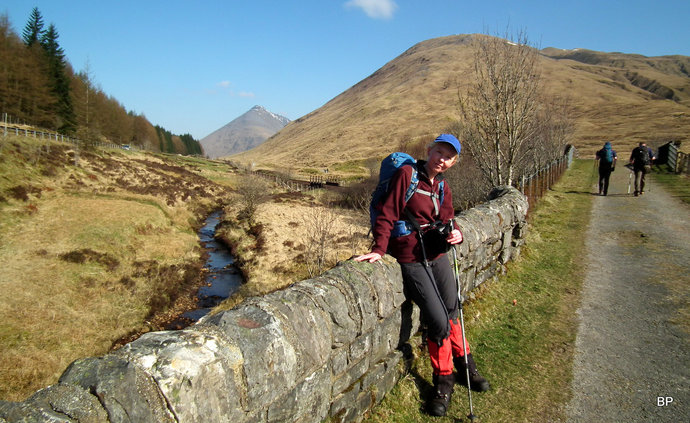 There is a faint, grassy track ascending the southern side of Beinn Odhar. Looks piece of cake from below but I can't deny it's a nearly 600m push, not painfully steep but relentless. 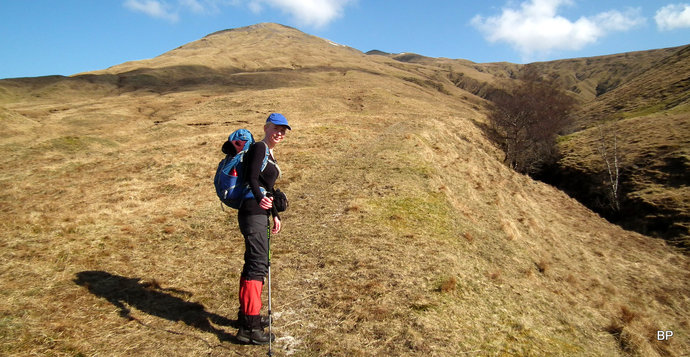 View down into Glen Orchy and to Tyndrum, with ben Lui & co. on the horozon:

It took us some time to eventually haul ourselves up that slope. I had to stop a few times to re-apply sunscreen, the sun wasn't joking. Views were getting more interesting with every step, Ben Challum popping up on the skyline:

About 100m below the summit we took a 5 min breather for water and photos. The final ascent didn't seem too bad:

That view to the south is something special. I know that this area lacks the charm of the far west (Knoydart, Torridon, ect.) but it is still stunningly beautiful if viewed from certain angles 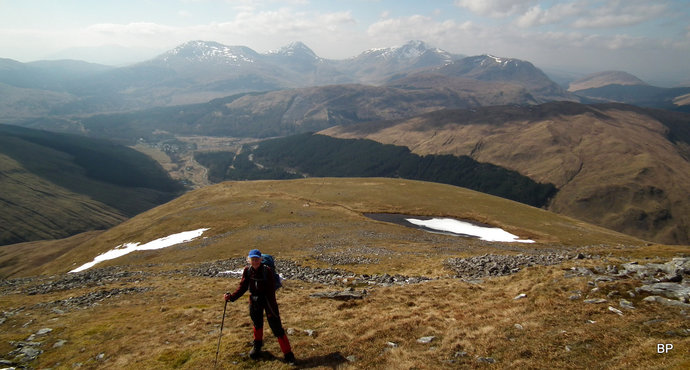 At least there was a cool breeze on the summit of Beinn Odhar and we were not baking alive any more, quite the opposite: it felt cold! At the moment, I was in a happy mood, thinking that we have probably done the worst of the ascent. It can't be that bad, now it's just traversing from hill to hill! Oh, how little did I know...
The meowing one celebrating her 152nd Corbett:

View north: Beinn Dorain to the right, Glen Orchy and the more distant hills of central Scotland on the horizon. The day was quite hazy so the distant mountains looked a bit blurred.

Cam Chreag (the last of the 3) and the Lochay Munos behind:

The SE pano including Ben Challum and less obvious Beinn More-Stob Binnein ridge to the right:

After 15 minutes of recuperation on the summit of Beinn Odhar, we moved on to traverse to Corbett no. 2. Initially, the descent was easy on short dry grass, but later the ground started to get boggier and steeper with every step we took. Plus I had to admit, the slope opposite wasn't very inviting... We worked out that the easiest way of tackling this would be to follow a boundary marked on the map. Theoretically, there should be a fence. But as we were soon to discover, all that's left from the former fence are sawn-off stumps of the wooden posts. So in practice, it's just 350m of steep, knee-hurting slog up featureless terrain. The col is at 444m, so we dropped 450m from the summit of Bein Odhar, to regain most of that height in a quick push. Well, would be a quick push for someone with healthy knees. Mine started to send me first signs of protest about half way up the steep slog and I simply had to slow down.
View into Gleann Cumhang from the descent slope, Beinn a'Chasteill to the left: View back at the descent route from Beinn Odhar: About 100m below the summit, I was in agony. I can't blame my knees for hurting. They are simply getting old and the two injuries (the right one damaged while scrambling on Creag Dubh in 2011, the left one split famously in a silly accident on The Storr in 2016) didn't help. I have recently restricted my jogging, just not to overload them. Generally, even when they hurt, I can still walk even very long routes, just not as fast as before. But why am I moaning like a man with man-flu. That's Kevin's specialty 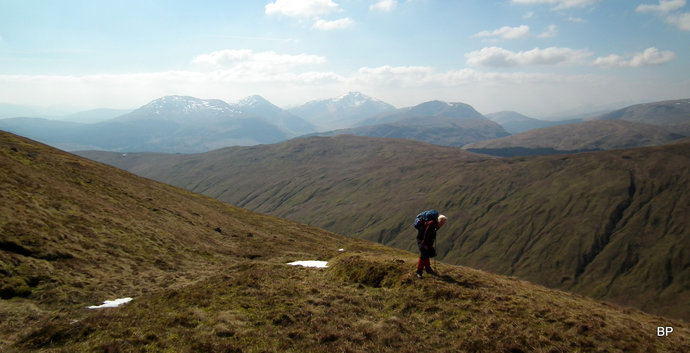 I felt much better when I sniffed the summit

And here we are, Beinn Chaorach, Corbett no. 153 (91 for wee Lucy). Nothing special about this particular hill but a sense of achievement nevertheless:

Kevin posing with Lucy by the trig point:

We didn't stay on the summit for long, decided to descend to the col joining this one to Cam Chreag and have a lunch break on the bealach, off the wind. But first, time for photos.
Beinn Odhar and Beinn Dorain pano:

South to Ben More, Stob Binnein and Cruach Ardrain, all rather hazy today:

The connection between Beinn Chaorach and Cam Chreag is, thankfully, much gentler and with only 200m of drop-reascent. We found a good rock to sit on on the way down and spent another 10 minutes resting and enjoying our tea and views. It was quite warm when off wind, unusual for April. Kevin kept moaning about the haze in the air and how 20 years ago such haze in spring was unthinkable.

Finally, the third Corbett of the day came under siege:

Beinn a'Chasteill from the ascent to Cam Chreag. We still followed the sad remnants of boundary fence:

My knees appreciated the gentle slopes of Cam Chreag and carried me all the way up tot he summit of our third Corbett of the day, our 154th overall: It was 4pm when we finally ticked off the last summit and we didn't plan to linger for long, especially that we still had a long walk back and then, even longer drive back to Inverness. But it would be a sin not to record some views, as Cam Chreag is, I think, the most interesting of the trio. Shame we didn't have time and energy to explore the whole ridge. Maybe we'll come back here one day for some kind of combination of this hill and Ben Challum, who knows.
Views from Cam Chreag, panorama north to Dorain ridge:

Creag Mhor and Stob nan Clach to the east:

We had a good look at the ridge of Beinn a'Chaisteil and Beinn nam Fuaran. It looked interesting enough and we agreed to come back as soon as opportunity arises, to finish the business here:

Beinn Chaorach and Beinn Odhar, with Ben Lui group behind:

The descent to Gleann a' Chlachain was easy initially: Thankfully, after the initial bog-hopping the track ascends a bit and becomes nice, dry and grassy, contouring around the eastern and southern side of Beinn Chaorach: The return walk was long but pleasant, later on we had lots of sheep and little lambs for company (maybe they came to greet Lucy?) and eventually, tired but grinning happily, we reached the car park in Dalrigh. 3 times lucky! 3 new Corbetts in the bag

Honestly, I don't think my knees would survive marching up two more mountains in a single trip! So I'm leaving 1500+m routes to young, healthy and brave souls, myself content with less epic, but still very interesting manage a'trois. Highly recommended, but better kept for dry times. Gleann a' Chlachain after heavy rain would be something "special" indeed

Another good day out!

Kevin is right about the haze, it was a bit disappointing to have hazy views during our canoeing week in Assynt/Inverpolly over Easter, but that's being picky when you consider what the weather could have been like!

Kevin is right about the haze, it was a bit disappointing to have hazy views during our canoeing week in Assynt/Inverpolly over Easter, but that's being picky when you consider what the weather could have been like!

The haze was sooo annoying all week, but you're right, better that than wind, rain and low cloud... or millions of midges!

We tried to take full advantage of the time off in April, spent the whole Easter holidays bagging Corbetts & Grahams... It will take me ages to catch up with reports. I'm doing my best at the moment