I'd never ventured far into the eastern Ochils until the opportunity came along recently to accompany Jaywizz around some of her local peaks. Many of the hills and the country between them appeared on the 1:25,000 OS map to present the challenge of navigating through dense continuous forest. Before venturing there, a study of on-line aerial photographs seemed wise and showed that there were gaps in the cover. Some area had not been planted, some areas had been felled, and there were more open rides through it than shown on the OS map. This time Google Maps had a more recent view than did Bing which helped a lot, especially on the way to Innerdouny Hill.

At a right-angle corner in the road just south of Stronachie a couple of tracks lead into the forest with plenty of parking space. A short distance SE along the road we turned left to walk beside the forest capping the Tump (Thirty Metre Prominence) of Knock Wood (367m). A combination of forest rides seen on the OS 1:25,000 map and Google's aerial view took us close to the OS spot height position. Our Garmins with OS 1:50,000 OS mapping took us there. It might even be the highest point, though with all the surrounding trees it is impossible to tell. From there it was NE and over a fence into the open fields where several sets of bootprints in the snow proved we were not alone on the hill. Next objective after threading our way through the fields was another Tump - Dochrie Hill (366m), its cairn conquered after 40m of ascent. The watershed then led us east along to where we met a combination of two fences - one low, one high - barring the way. Crossing the low one we walked between them for a time until breaking out onto a track. Jaywizz in the corridor between the fences

The deer fence continued between the wood SW of Tillyrie Hill and the summit without any gate or stile in it. That gave us no choice but to climb it at a corner to enter the new plantation and reach the trig point. Afterwards we cut through the wood on our way down to Tillyrie where I;d left my car. Stsrting from the same parking spot, this time we headed NW along one of the forest roads to follow it past a reservoir and up to the top of Slungie Hill(413m). The first section was obviously well used by dog walkers judging from the deposits on the track. Again a combination of map, aerial views and our Garmins took us to Slungie's spot height location in the forest. Jaywizz checking she is at Slungie Hill's spot height location

Back on the 'main' path we carried on west to Heads Hill where the same technique took us over it and to the spot height on top of North Hill. This time we had to zigzag past fallen trees and at one point change our route on spotting a large pile of them apparently blocking the way ahead. 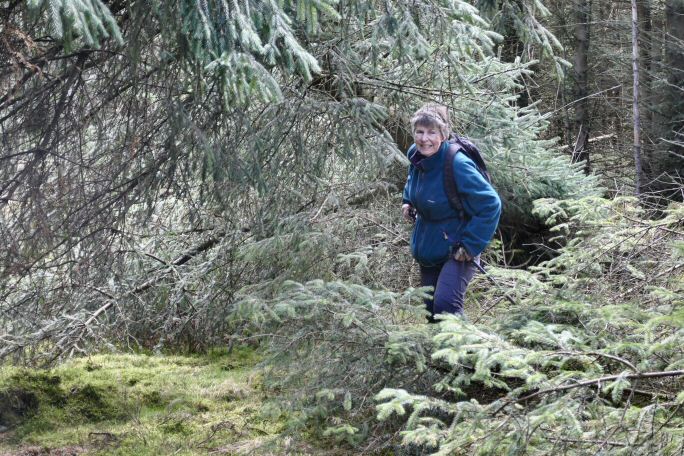 Walk Highland's 1:25,000 OS map with far more forest shown than is there now

Jaywizz and I both drove with bikes in cars to the forest track about 0.5km north of Stronachie and proved that there was enough space to park four cars there. A 3.6km combination of cycling and walking the steeper sections arrived at the end of the track and an indistinct path (on the ground though more distinct in the aerial view) led across a felled area to a hop over a fence and up to the cairn on the very minor top of Coalcraigy Hill (450m). Jaywizz leaving the bikes at the end of the forest road. Easy paths then led us to the trig point on top of Innerdouny Hill (497m) - a fine viewpoint on a sunny day. Needless to say the freewheeling descent of the track back to the cars was considerably faster than the ascent.