A nice dry crisp morning greeted us so we headed for our planned route to finish off the Arrochar Munros.
Lots of cars in the car park in Arrochar but most of the people I guess were heading for the Cobbler. We set out up what seemed like the M8, a very well worn track to the Cobbler but soon turned right and then left up a much less troden track to climb up towards Cruch am Miseag and views of the Cobbler.

Is it me? I just cant see a shoe there anywhere! 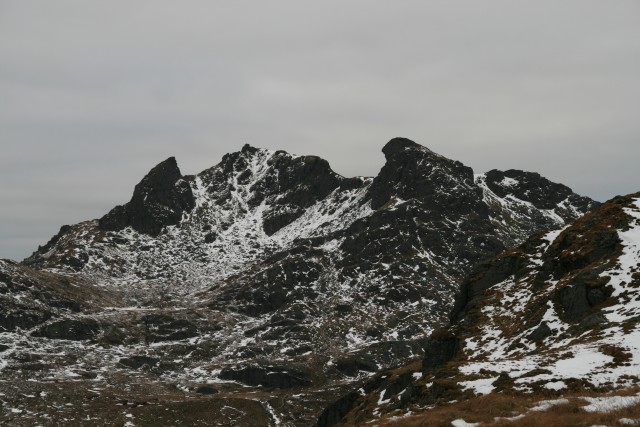 From here it was a nice walk to the base of the scramble up to the Spearhead on Narnain and the summit. The snow was frozen hard and there was plenty of ice around so time to put on the crampons and attack the scramble. We went to the right of the main buttress and up a small snow filled gully before turning to the left and summiting. A quick sandwich and time to head off for Beinn Ime, crampons stayed on for the decsent of Narnain and all the way up Ime where we were met with wonderfull views all round. It was clear enough to see all the way down to Ailsa Craig. Ailsa Craig in the distance Another sandwich and then time to return down Bein Ime and join up with the wide track leading back from the Cobbler which we followed all the way back to the car park with head torches for the last half hour trying to pick out the sections of ice. Another fine day.

Leg1.gpx Open full screen  NB: Walkhighlands is not responsible for the accuracy of gpx files in users posts

Good report - I imagine the Arrochar Alps could be quite testing in winter conditions.

. Not sure I'd bother going on to Beinn Ime - but I have been up there before

Good report Dalmallywalker, with nice set of pictures.
Completed this walk a few months ago, although lots of clag, couldn't even see the spearhead when we were right beside it. Nice to get a clear day.

Nice hill is Narnain, did it last xmas morning and had great views.

Nice hill is Narnain, did it last xmas morning and had great views.

Thanks dooterbang. But what is TR?

Lovely stuff dalmallywalker and you got some nice clear views.

Some call them WRs, ie walk reports, some TRs which I think is trip report.

Completed Narnain today, sun was out all day it was great

This looks like the best bet this week for Munros with little or no snow. My friend and I are hoping to do these 2 plus the Cobbler. We don't have crampons though and we'd like to know if this route requires them. Thanks