(Camera batteries flat again so these were taken on my phone)

I've been interested in doing Carn Gorm-loch for some time now. A few meters higher and it would probably be a Munro. If the col between it and Am Faochagach was a couple of meters lower it would be a Corbett. As it is, it sits off the beaten track in list obscurity (It would be a HuMP or a Corbett top to a Munro, I'd imagine) and sees few visitors.

Having failed to get out on the hills while in Wales or Dundee over christmas (despite many plans), I was itching to hit the hills again. This route seemed like a good option, being close to home, not too long, and giving me another Munro for my second round (I'm not really doing a second round of Munros, hence why it has taken me almost 2 1/2 years to do the most recent 10!)

I set out rather late, leaving the house after 10. No worries, I thought, as I had the bike to speed me up Strath Vaich and save over 8km of walking. The clouds were clear of the summits as promised, but things were very grey.

I set off up the road to Strathvaich Lodge at 10.50, taking about 25 minutes to reach the dam at Loch Vaich. Easy going as the road is tarmac and reasonably flat the whole way. I couldn't see much evidence of my descent track coming down behind the lodge, so decided that I would start and finish the walk at the dam.

Looking up Loch Vaich across the hydro intake: 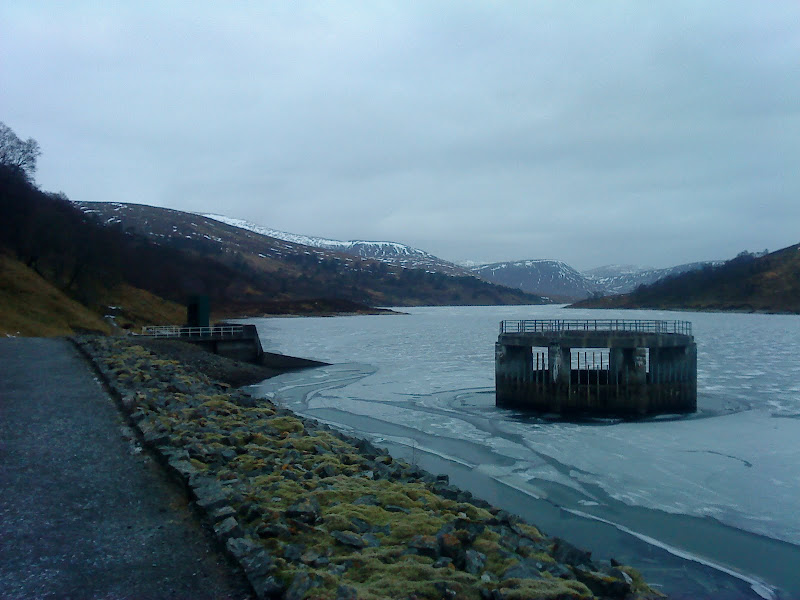 Across Loch Vaich to Beinn a Chaisteil and Meall a' Ghrianain: 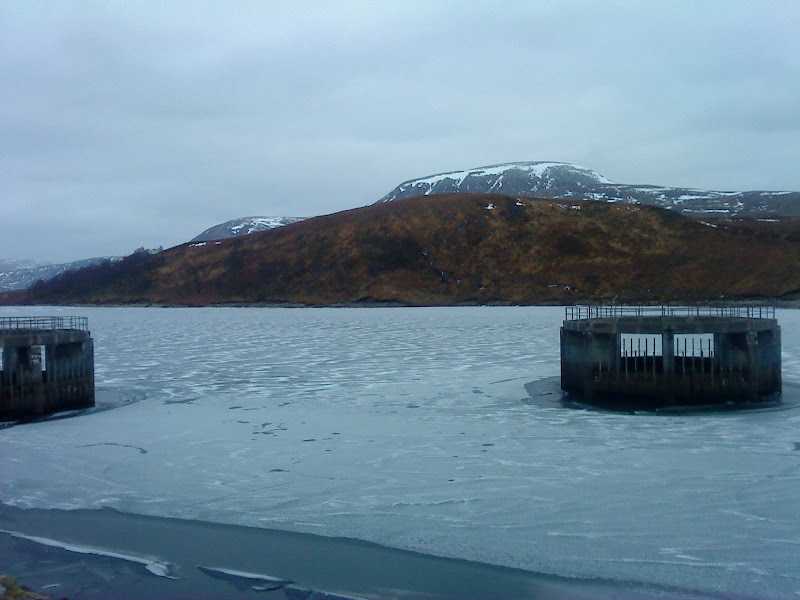 The first section of the west shore of Loch Vaich has a decent path. This makes a pleasant change for this area, winding pleasantly through scattered trees and heather. For all the ease of access to the Fannaichs and Beinn Dearg from the A835, they have rather bleak, windswept starting points. 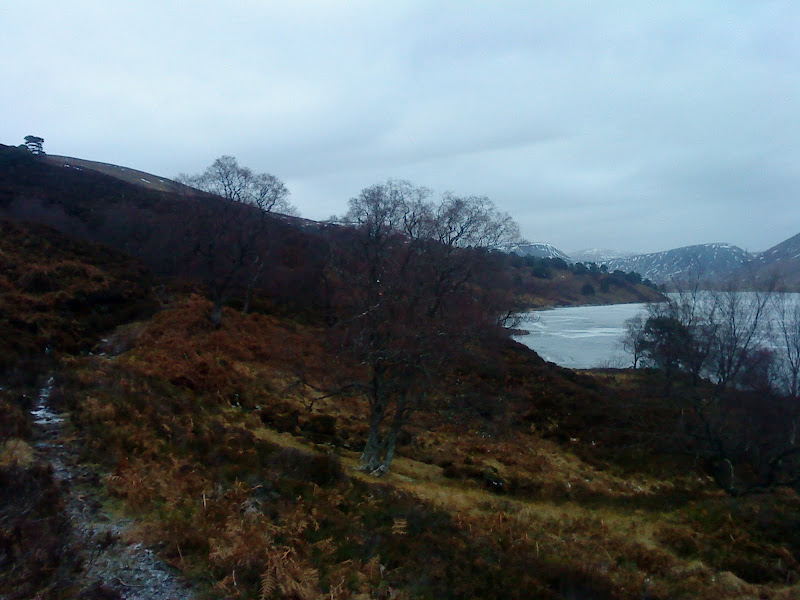 Sadly the made path ends shortly before the pretty waterfall on Allt Glas Toll Mor, and the going from here is more like other favourite lochside walks like Loch Mullardoch and Loch Quoich. Fortunately the scenery is still pleasant, and there are intermittent deer tracks. There is a fairly new looking cairn along here, although no indication what it signifies. 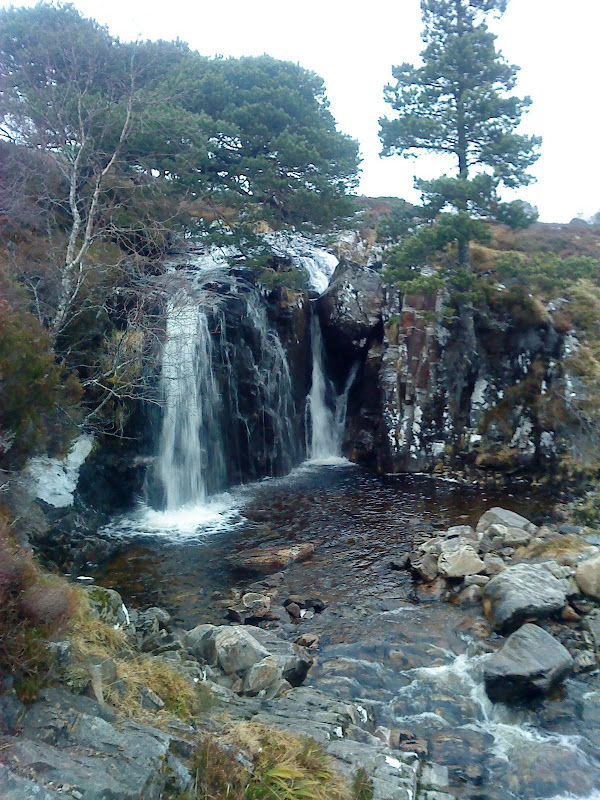 Pathless section along W side of Loch Vaich: 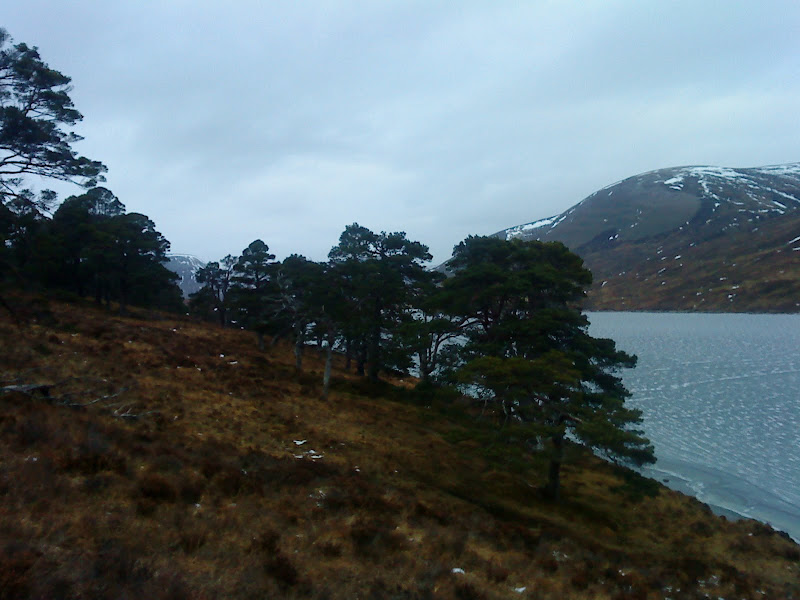 Well constructed cairn - no plaque, with Carn Gorm-loch behind: 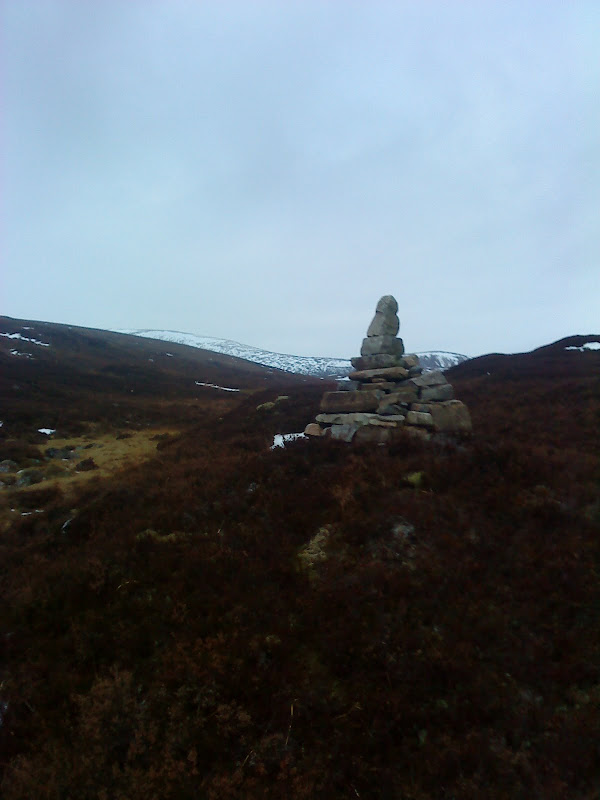 A stretch of more open ground leads to the Allt Glas Toll Beag, on the other side of which a very good stalker's path comes up from the loch side. This is not shown on the 1:50,000 map, but can be seen on the 1:25,000. I had noticed it when on Beinn a Chaistiel some time ago, snaking up onto the shoulder of Carn Gorm-loch, and had wanted to explore it ever since. Evidently it was reached from Lubachlaggan on the other side of Loch Vaich before the water was raised. In fact when the loch is low, you could still probably wade across if you fancied a dunking!

Looking back to Loch Vaich with Ben Wyvis and Little Wyvis on the left: The path splits once up a hundred meters or so, and I took the branch which led towards Gorm Loch, chasing the odd deer on the way. Gorm Loch lies in an attractive corrie with some fairly large slabs at the back. Nothing like as impressive as Coire Ghranda on Beinn Dearg, but worth a look. The stalker's path zigzags up the east side of the corrie, ending at the top of the steep section. 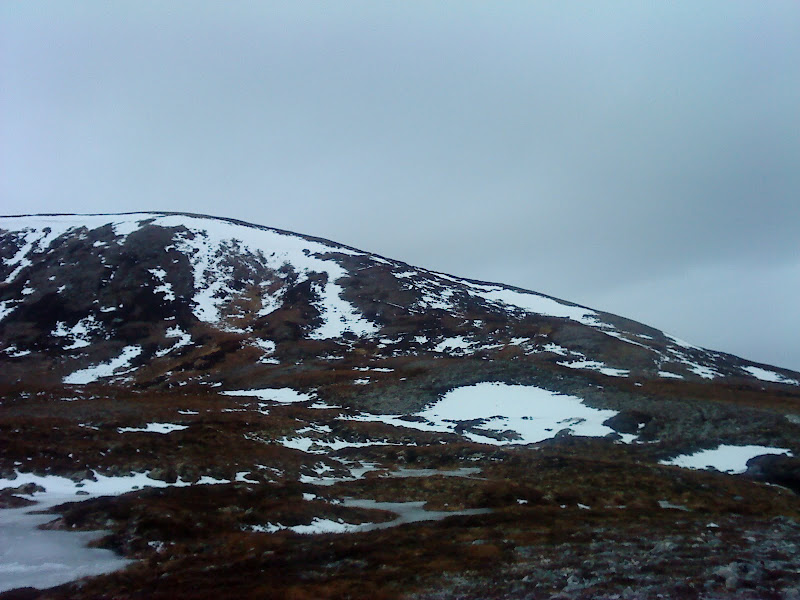 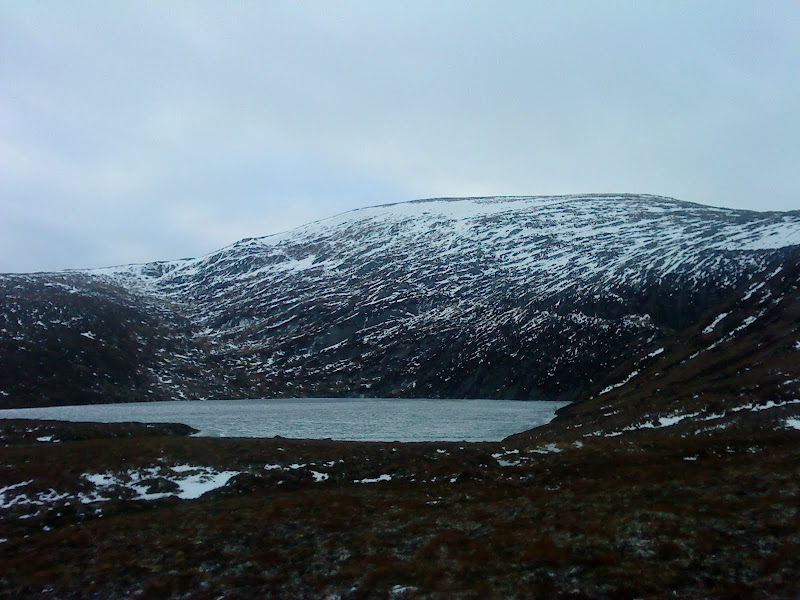 Across Gorm Loch to a shoulder of Am Faochagach: 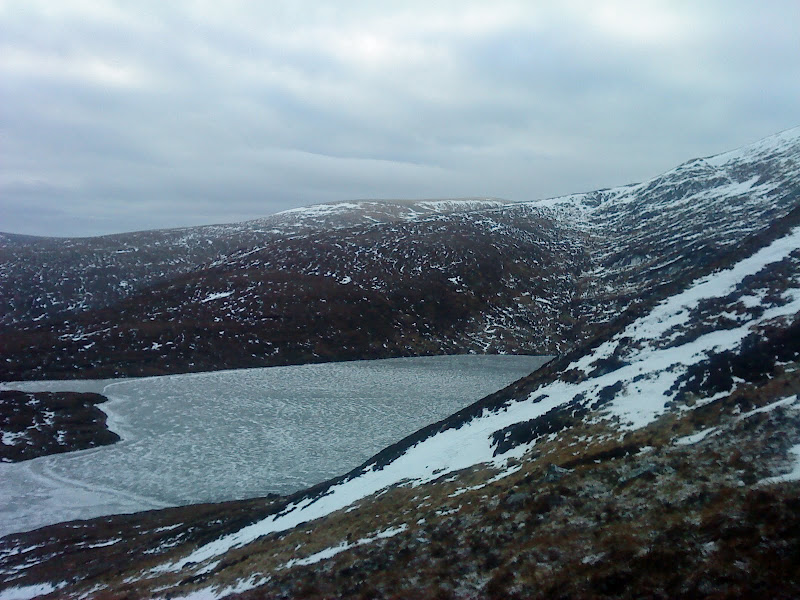 The views were opening out as I gained height, along with an occasional spot of sunshine. The best views were back across Loch Vaich, north to Carn Ban and NW to Seana Bhraigh. 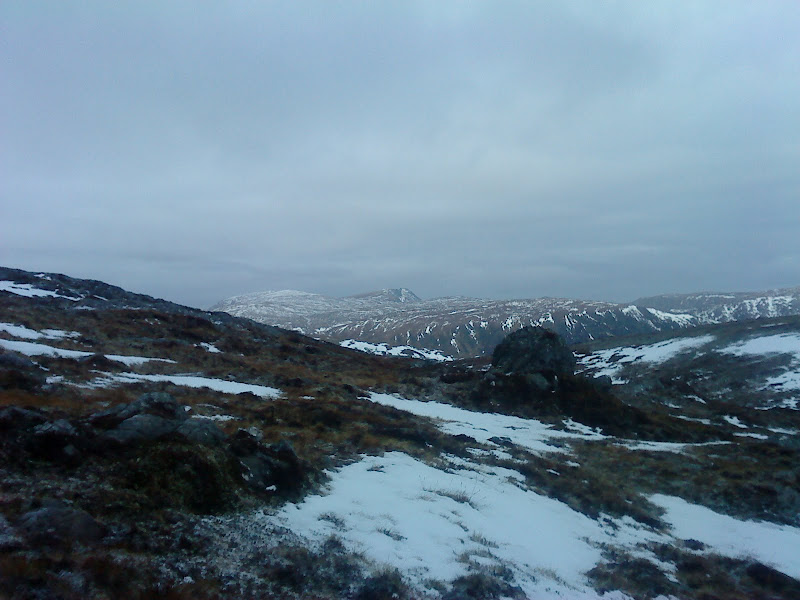 Back across Loch Vaich to Beinn a Chaisteil: 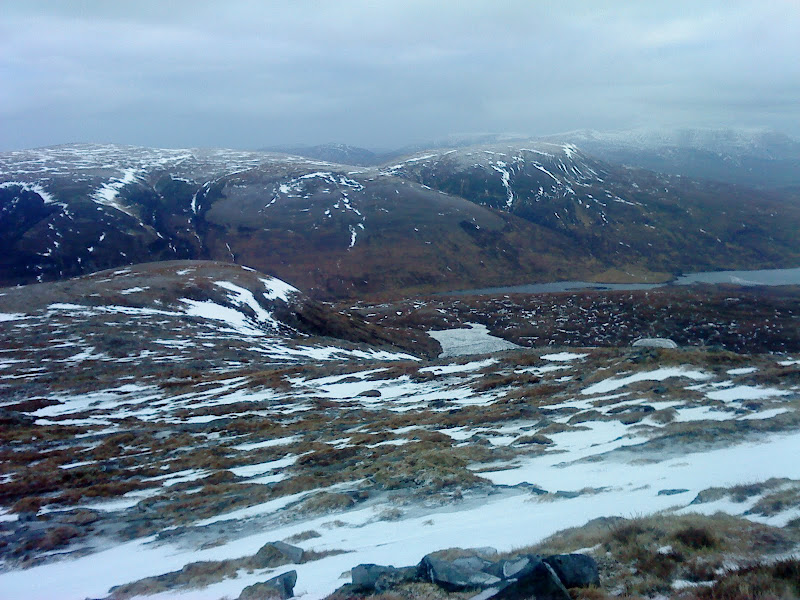 Up to now the walking had been straightforward, but the ice began to make things awkward. This side of the hill appeared to have a mixture of bare rock and bog, and it was all iced solid. Even some of the sections which looked like snow were solid ice, impossible to kick steps in. I decided not to bother with crampons, and did lots of weaving about to avoid the worst. Two hours after leaving the dam, I was on the summit. The views weren't bad, with Beinn Dearg an Cona Mheall more visible than I had expected from this angle, and Am Faochagach looked more interesting than from any other angle. I stopped for a coffee and some food, but felt cold really quickly.

Once on the summit of Carn Gorm-loch, Beinn Dearg and Cona Mheall come into view: The better side of Am Faochagach: 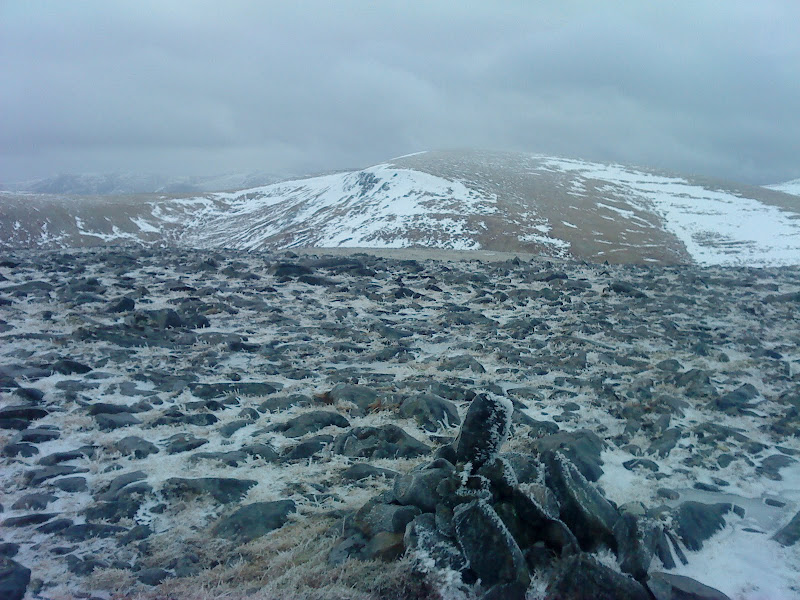 I decided to put on my crampons to speed things up, but typically the going from here onwards was not as bad as the ascent. I ended up taking them off again on the ascent of Am Faochagach. The time saved by using them was probably equal to the time spent putting them on 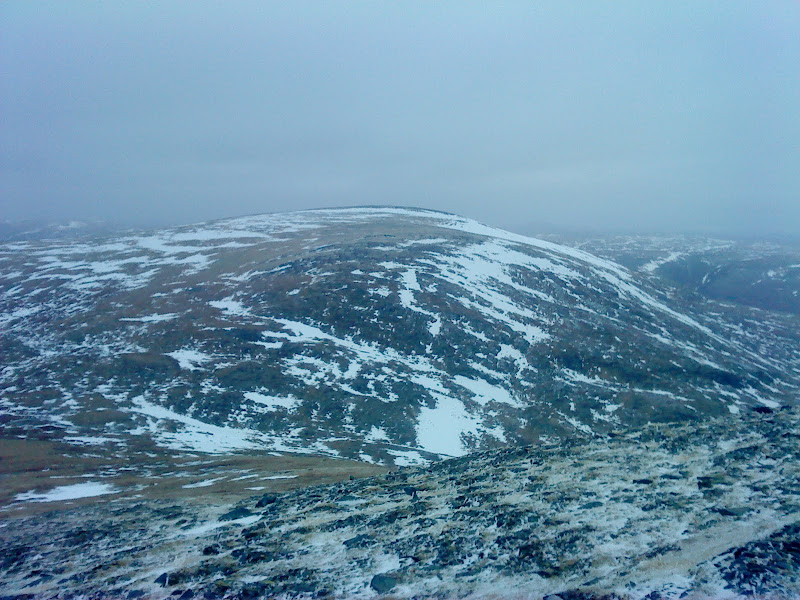 By the time I had got to the summit of Am Faochagach, I was in the cloud. Nothing much to hang around for, so I got moving south. Ice slowed me down again, but I couldn't be bothered with the crampons again. Below the cloud again, I got my much anticipated view into Coire Ghranda. Sadly it wasn't quite what I was hoping for due to the poor light and cloud, but nice to see nonetheless.

Oh no! Not more misty summit cairns! Summit of Am Faochagach: 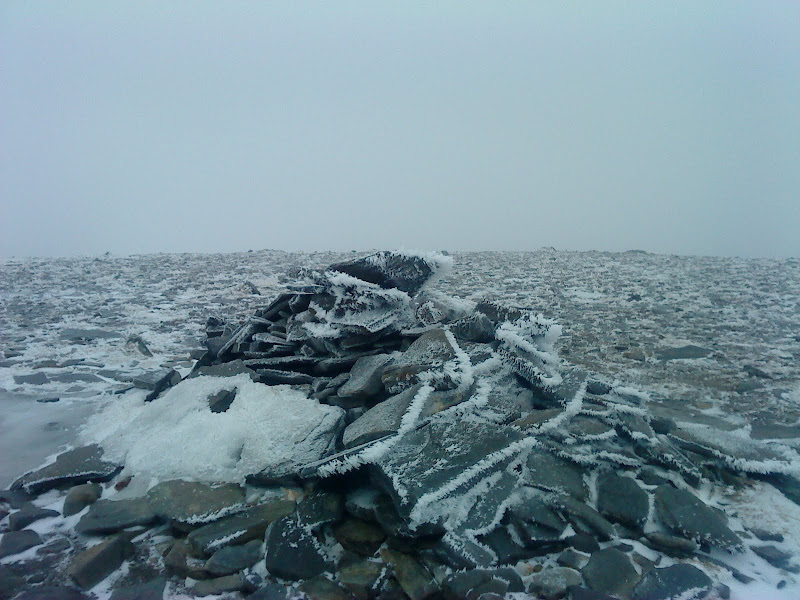 Not the best shot of Coire Ghranda and Beinn Dearg: 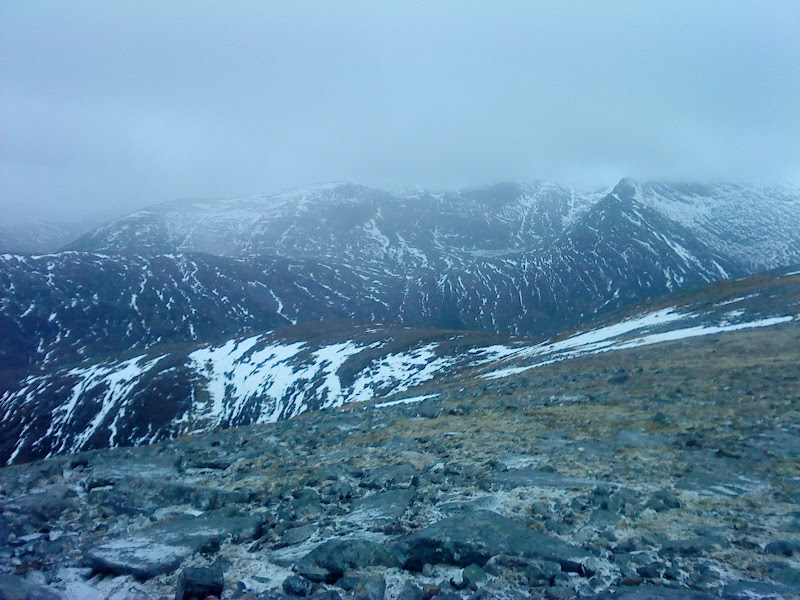 The walking back to Strath Vaich over Sron Liath, Tom Ban Mor and Meall Coire nan Laogh was uneventful, with few views. The ground was really easy underfoot though, and this part of the walk would make a grade A evening stroll with some sunshine. Fortunately I took a bearing from Tom Ban Mor, otherwise I would have found myself on the shores of Loch Glascarnoch (this appeared out of the mist, and I assumed it was Loch Vaich before checking my compass and going the other way!)

On Meall Coire nan Laogh, I was clear of the mist again, and the gathering gloom was very atmospheric, with the air completely still and no sounds whatsoever. The track shown on the map was virtually non-existant - more a couple of boggy ruts in the heather than anything constructed. I moved away from it and took a line towards Loch Vaich dam, passing through some lovely mixed woodland just as the last light left me completely. 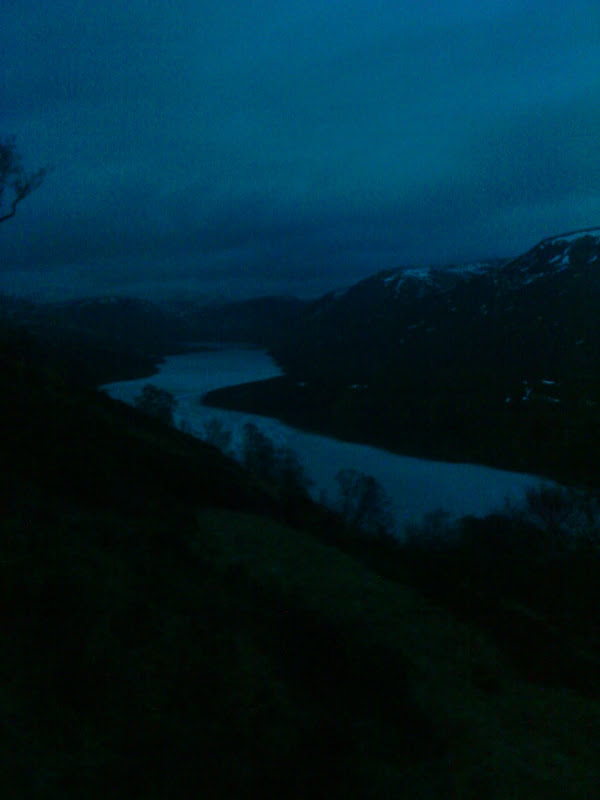 I now had a 20 minute cycle in the dark, but I wasn't bothered as I had remembered my bike lights for a change

The walk took me longer than expected, mainly due to the ice, but despite the greyness it was an enjoyable start to the year's walking.

That bike ride at the finish would be fab on a tarmac road, and with lights

Bet your feeling soooo much better for getting out, them withdrawel symptoms must have been torture

That's a long trip for this time of year - even with a bike!

The ridge from Loch Vaich to Am Faochagach looked like a good high level day when I was up last year but I don't think I'd consider a trip like this at this time of year. Good effort

Good detailed report. Nice to blow away the cobwebs with a day on the hills.
My bike will be left in the cupboard until any sign of ice is gone.
Good effort!

kinley wrote::lol: Another close one Malky - we were considering Am Faochagach from this direction today - but plonked for Strathconon instead (still grey

Interesting - had vague ideas of doing the two Strathconon Corbetts instead as they make a good short day, but decided I would like views from them next time

. Looked greyer over that way than where I was, but I'm guessing it was pretty similar. What did you go up?

Paul/Leithy/Dooterbang: It took me longer than I expected - thought it would be an easy day due to the relatively moderate amount of ascent. I got away with leaving as late as I did as it it takes less than 40 minutes to drive there. Pretty handy area this (Strath Vaich, Fannaichs, Beinn Dearg)

Great stuff Malky. Really enjoyed perusing this one. It's an area I really don't know at all. Must rectify this sorry state of affairs soon!

Users browsing this forum: No registered users and 117 guests