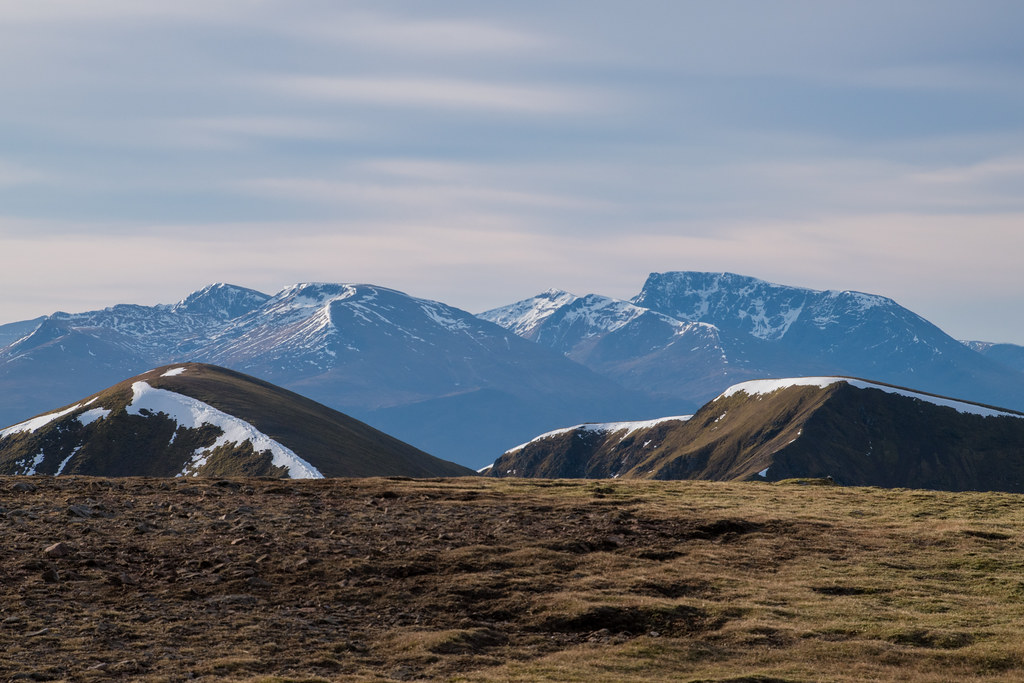 Eager to get the earliest start possible to avoid driving back in the dark, I set off from Aberdeen long before 5am and headed towards Loch Lochy. It was a long drive alone in the dark, made worse by hitting an already dead dear at approximately 70mph whilst overtaking two lorries on the A9. After pulling out to overtake I was stuck between the lorry and the central barrier and must only have had 1-2 seconds to react. It was a case of gripping the steering wheel and bracing for the opposite of a giant pot hole. Very fortunately I managed to avoid any temptation to swerve! Remarkably the car didn’t take any noticeable damage and gave the birds when I parked up a bit of a feast… Gross I know, but no risk of falling asleep after that, adrenaline was well and truly flowing.

As expected I was the first car at Kilfinnan and it looked to be shaping up for a good day. Although overcast it was promised that high pressure would keep all the cloud well above Munro height and I would be accompanied by a gentle breeze which was due to increase to rather miserable by the early afternoon.

The walk alongside Loch Lochy is straightforward but in truth a bit boring so I was happy to reach the fork in the path to begin gaining some height, and hopefully views. 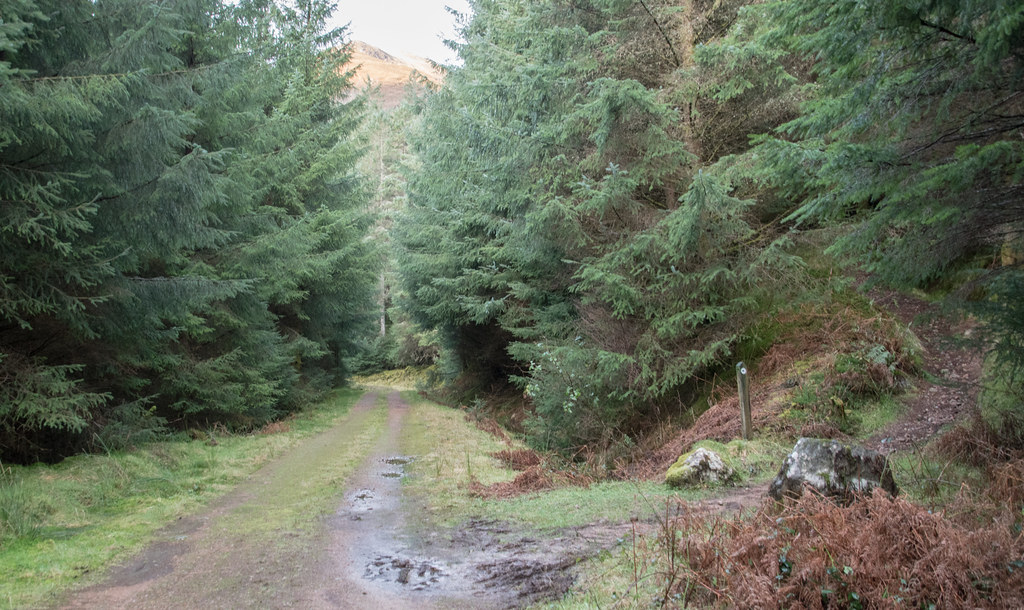 Stream in the dense Kilfinnan woods 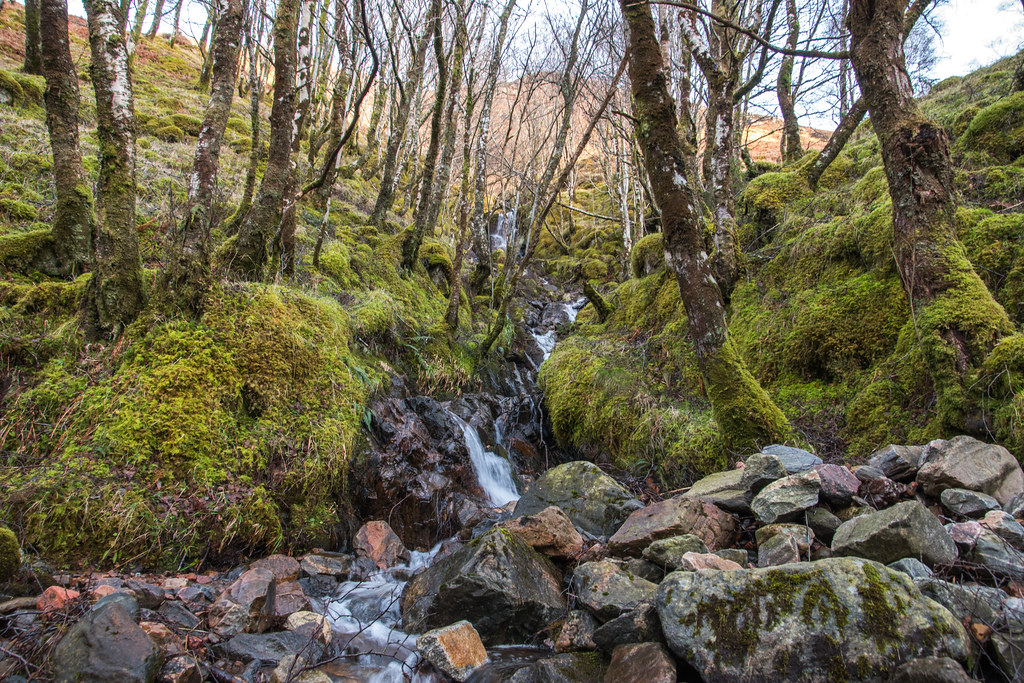 As mentioned in the route description the initial climb through the woods is steep and rather overgrown, I imagine it would be a worse in the summer, or maybe the increased footfall from the summer-only walkers would remove some of the branches?

Once above the tree line the sun began to rise over the surrounding hills and gave some good views down to Loch Lochy, which was eerily silent, with the exception of the early morning sports car / motorbikes zipping alongside the A82.

Love the early mornings in the hills 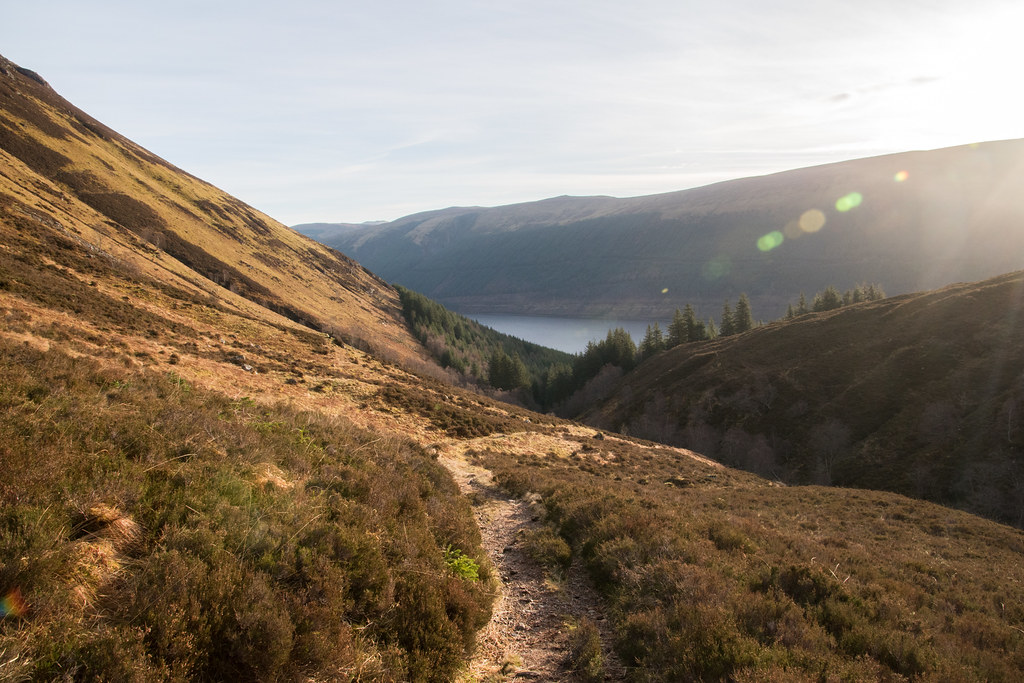 With the recent dry weather the sections heading towards the bealach were good to firm and before long at all I had reached the bealach between the two Munros Sron a’ Choire Ghairbh on my right and Meall na Teanga on the left. I hadn’t fully decided which direction I would head up first so decided to head right and follow the well-defined zig-zag scar up to Sron a’ Choire Ghairbh. 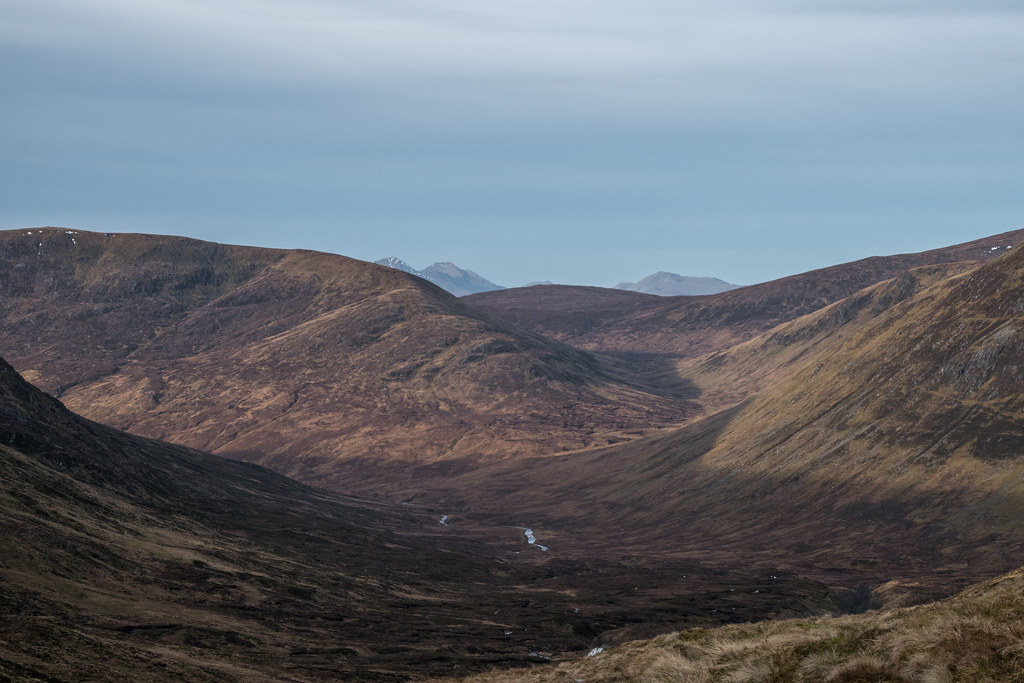 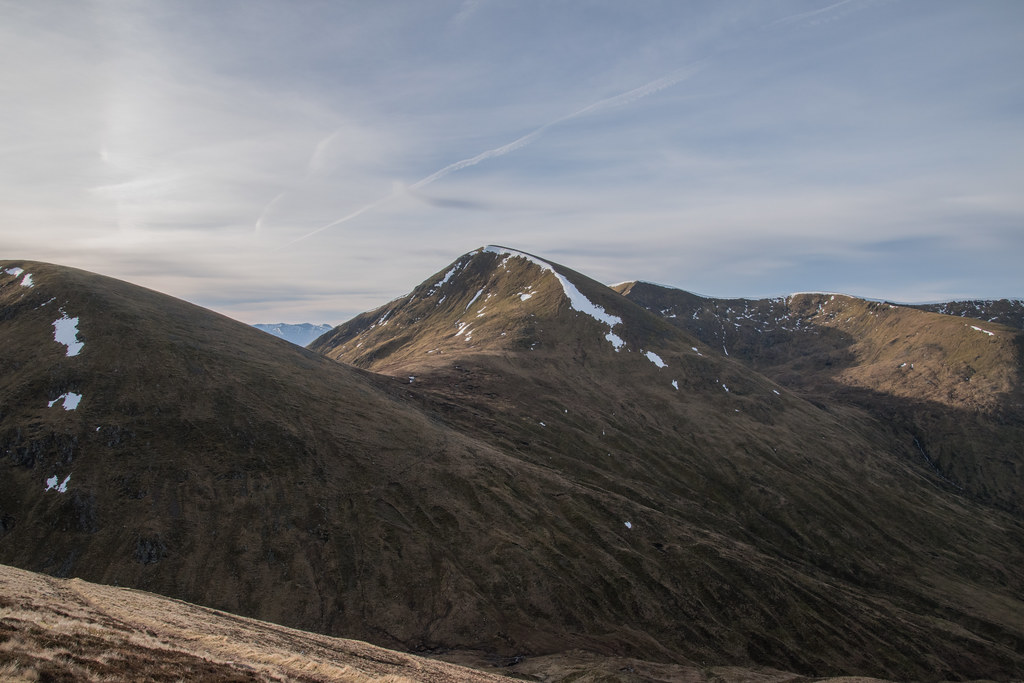 I was at the summit of Sron a’ Choire Ghairbh by just after 11:00, and was already feeling tired after the early start and very long drive, but I wouldn’t rather be anywhere else, and I vividly remember thinking this as I was beginning to get hit by the cold wind. I hadn’t seen anyone else and the signs of civilisation were few and far between looking in most directions. That is until you see what I think is the Beinneun Wind Farm, which is extensive… 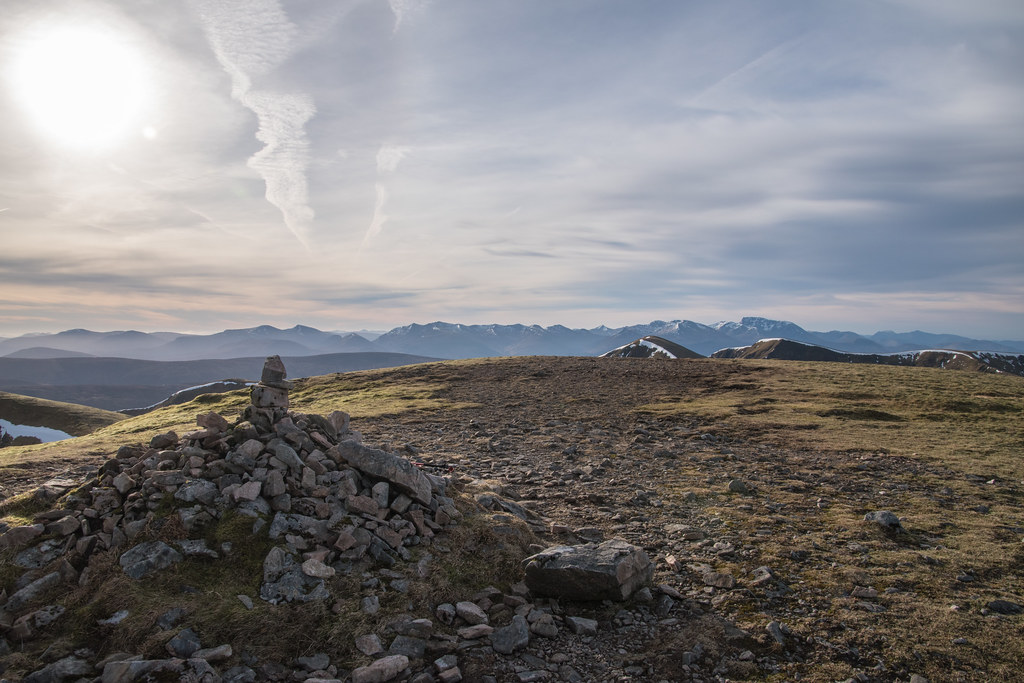 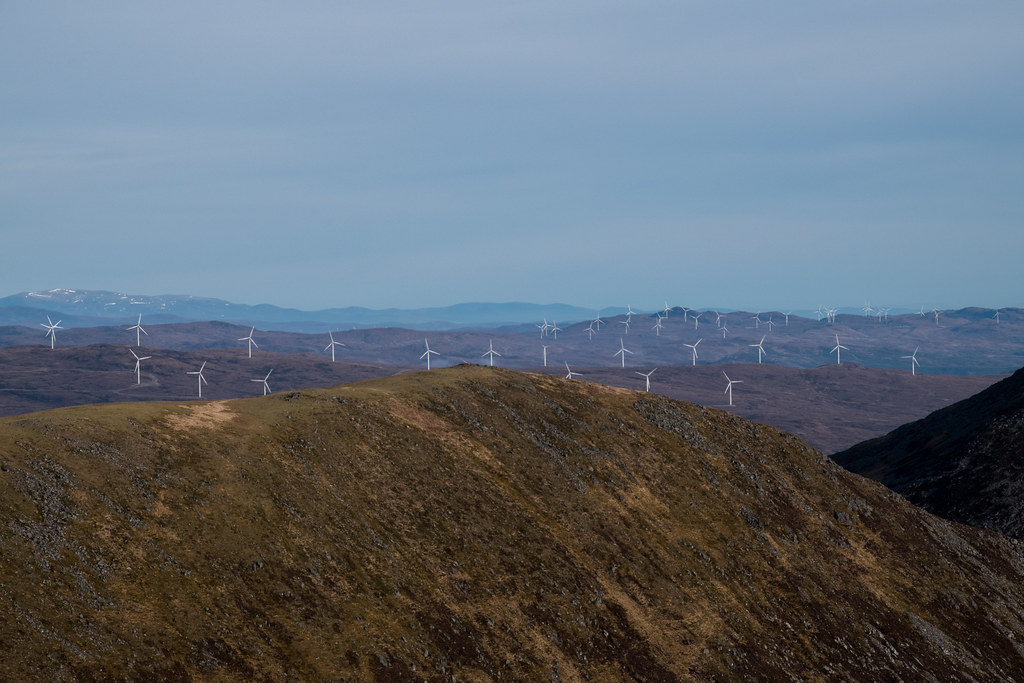 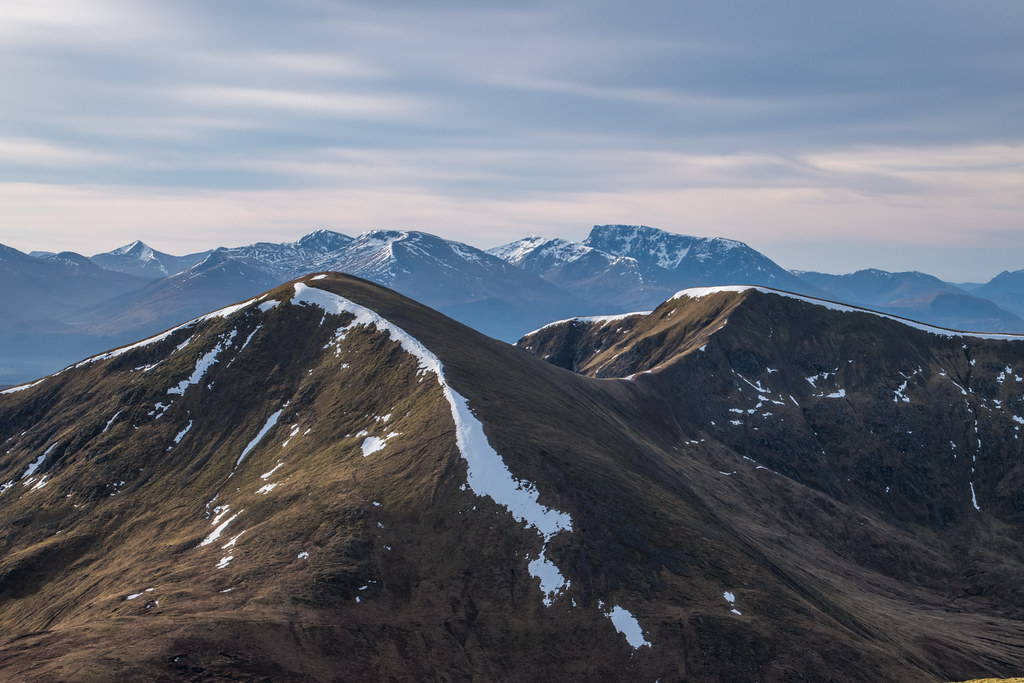 By the time I had retraced my zig-zagged steps down to the bealach I met my first couple of people for the day. One kindly informed me that it looked as if I had hit something considering the remains were attached to the front of my car… “thanks I hadn’t noticed”, I thought. I stopped and had a break from the wind that was bitterly cold heading up Sron a’ Choire Ghairbh before making my way up Meall na Teanga.

The route up Meall na Teanga was extremely boggy to begin with but always relatively straight forward to avoid. There was one annoying patch of solid snow/ice to cross (clear in above photo) that was extremely well consolidated. Thankfully it was only 5m wide but unavoidable and proved very difficult to kick any form of meaningful steps. I hadn’t taken my crampons so took it very slow and steady. 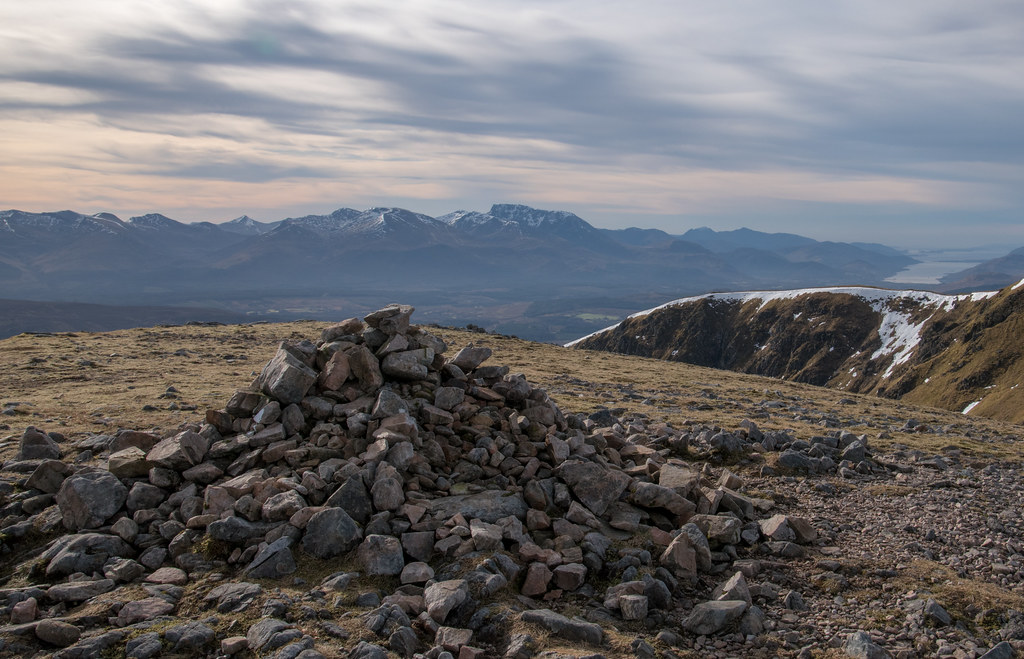 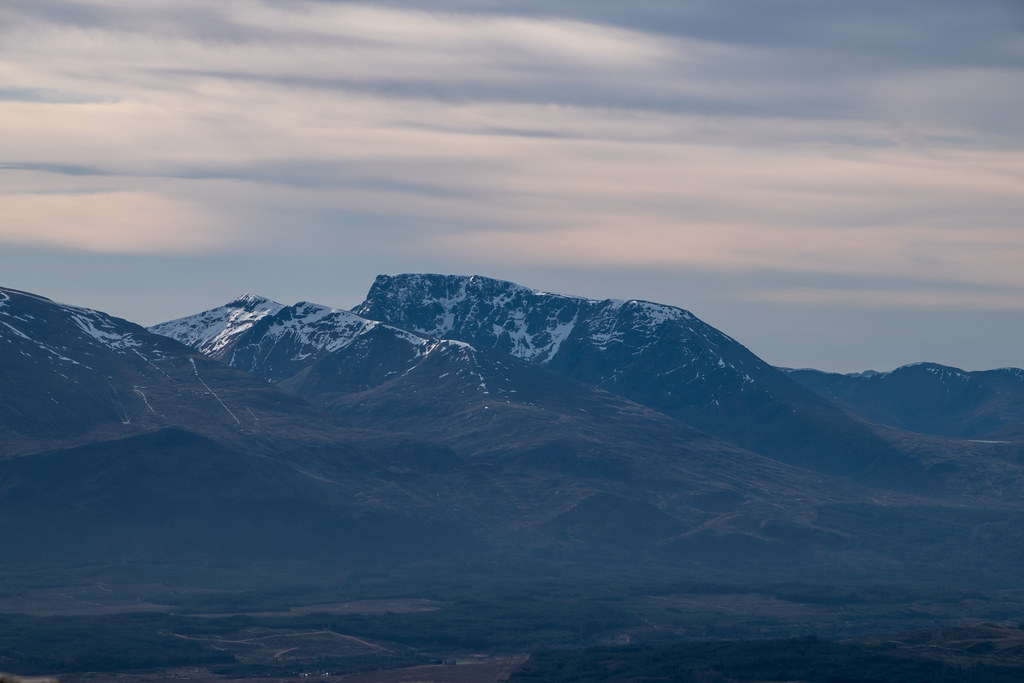 Sense of the zig-zag 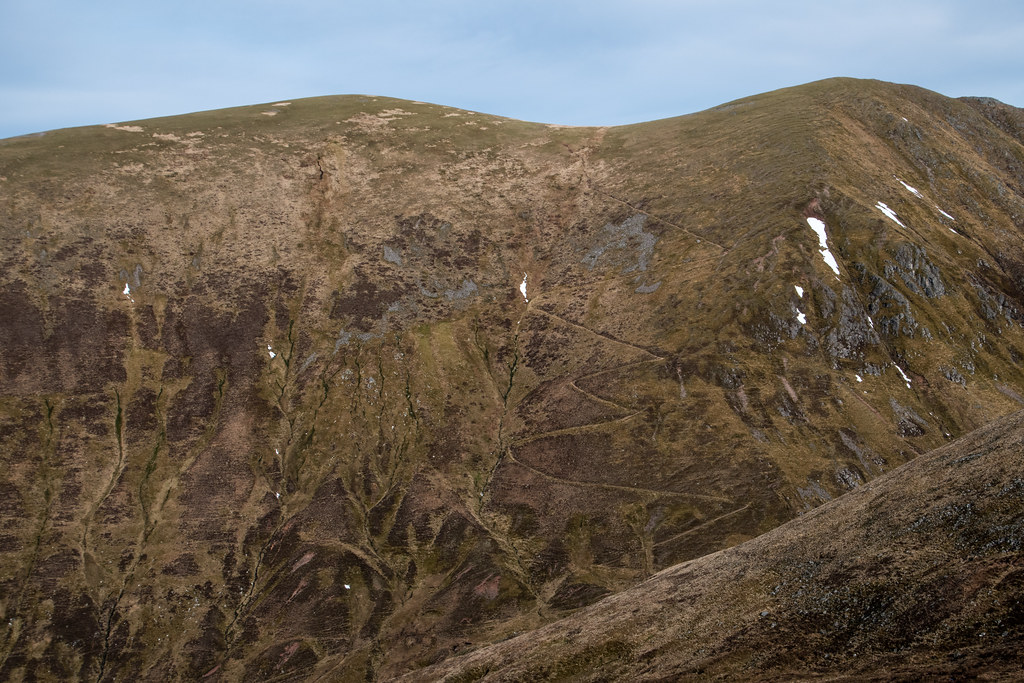 By the time I was back at the bealach it was getting increasingly busy. I was glad to be getting off the hill at an early time as the wind was noticeably picking up as expected.

I passed a few groups of walkers heading up as I was heading back to the car, often looking puzzled as to why I was heading home so early, probably thinking I was looking at them in a puzzled fashion as to why they were starting so late.

The route back along Loch Lochy, although slightly downhill was worse than I remembered from earlier – it seemed to take an entirety. I even got the map back out just to check I hadn’t missed a turn or something! I was back at the car in a good time and meant I would get most of the drive back to Aberdeen in daylight which is always a bonus. Miraculously the birds had scavenged nearly all of the remains from the front of my car and I was ready to head back to Aberdeen.

In truth these two hills won’t be the most memorable, but the adventure of getting there probably will!

Until next time, thanks for reading.