Munros included on this walk: A' Mhaighdean


Glorious warm morning setting off from Poolewe. Good estate road up to Kernsary forest and once through that nice singletrack. Took 75 minutes to bike into the causeway at Dubh Loch. Beinn Airigh Carr looked very imposing to the side most of the way but the track is quite rough and needs a lot of concentration to avoid boulders and to stop often for the drainage ditches which often are lined with very sharp edges and very easily cause pinch punctures. Got one when i had got fed up getting off my bike to cross each one. Top of A'Mhaighdean seen from the path and i think looks falsely close from here. As i planned to ascend via the NW ridge wasnt sure if i could cross the stream lower down so climbed not much short of a switchback before easily crossing. Looking back west to start Looking up the ridge 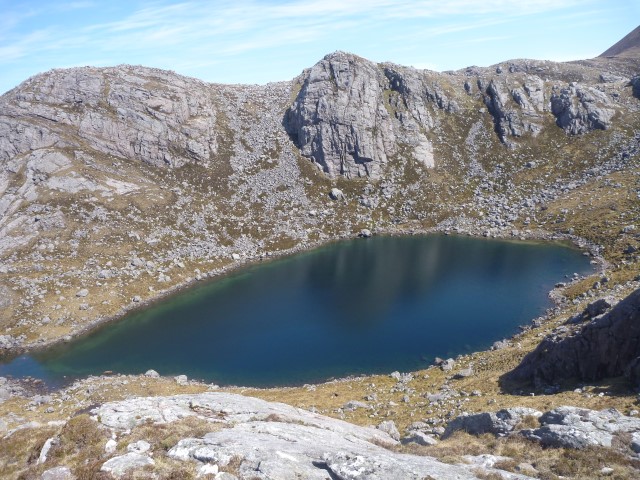 Although i had read that there was a very steep drop along this ridge it still came as a surprise. Fuar Loch Mor is just seen in the upper left of photo. right at the edge looking down

Below is the view looking back from the same spot. Walking back about ten paces and gullies go down both sides. Take the one facing An Teallach [north east]. Below is a picture taken another ten paces back showing the gully and the tiny gap that is squeezed through is right in the middle of the shot in the foreground. The large rock tower ahead is bypassed on the right. Looking down to the bypassed tower

Then easy sweep round to the summit. 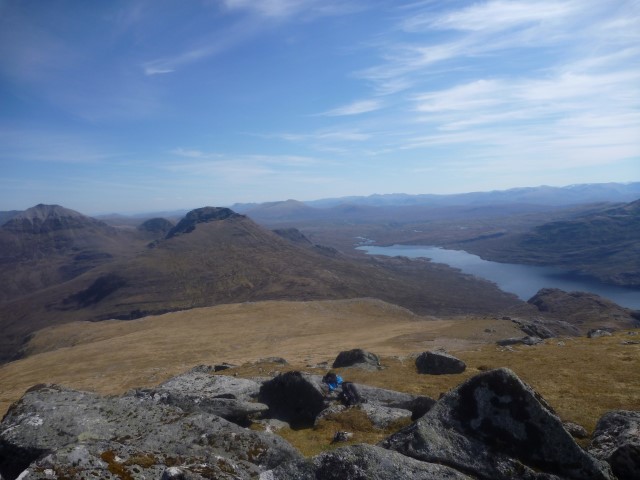 An Teallach in the ditance

Then headed towards Ruadh stac Mor and joined the good path heading northwest the top of Allt Bruthac an Easain then down to Carnmore where i was greatly relieved to find that my replaced inner tube was still inflated. The light wind had changed 180 degree so again cycled into a headwind an was glad of the ebike. Took a few minutes longer to bike back than on the way out. Slighter tougher biking on return though only had to dismount once on a short steep rough rise.
I have often used a standard bike to approach the hills but this was the first time i have used an ebike and it was very well suited to the terrain.