With a forecast of unbroken sunshine, zero probability of rain and gentle winds, Monday was definitely a day for the hills. I decided on visiting one or two Galloway Marilyns that had been on my wish list for some time.
Craignell - 7.7km, 360m, 2.9 hrs

An early start from home saw me parked on the single track road to the west of Clatteringshaws Loch just before the bridge over the Puiran Burn. I started walking at 10:30 and immediately turned left onto the track to the quarry below Craignell where I saw a digger working away. Another left turn there took me to a padlocked gate across the track just where WH's on-line OS 1:25,000 map suggested another track headed uphill to the right. Instead there was now a grassy footpath. So I took it. It did a zigzag just as shown on the map. I stopped to take a photo of what I planned for later that day. Clatteringshaws Loch with Cairnsmore - Black Craig of Dee - beyond.

As the path was about to descend I left it to climb up to the summit of Low Craignell where the rest of the ridge spread before me. A path or series of paths led me along the ridge to the summit. It either faded away a few times or I kept losing and regaining it. The highest point is just after a final dip in the ridge and about 60m before reaching the cairn. At the cairn and obviously lower than the previous section of ridge. Cairnsmore again in the distance

After a leisurely stop in the sun I reversed my tracks then took an easy descending route down to where I saw a path leading back through the woods to the forest track. Heading downhill and aiming for the path through the forest Looking back at my descent route

I was soon on it and back at the quarry where I had a long chat with the only person I met all day. A local resident, she was nearing the end of her cycle ride circumnavigating Clatteringshaws Loch - about ten miles I think. Back at my car I decided there was still plenty of time for a second shorter walk.

I'd read Walk Highland reports on climbing Cairnsmore (Black Craig of Dee) from the west. It appeared to me that a more direct and shorter route would be from the north especially now that Google Maps showed some of the forest there had been felled and there was parking marked on the A712. It was only a couple of kilometres from there to the summit so couldn't take long - or so I thought. I might also extend my route to investigate the Rocking Stone marked to the east of Cairnsmore and possibly the nearby Diamond Stone as well. That all seemed a fine walk to complete a great day - little did I know! I already had experience of on-line aerial images being out of date. That lesson was quickly reinforced. Parked in the A712 layby with Cairnsmore in the distance

The felled area I'd seen on-line had been replanted quite a few years ago judging from the height of the trees. I started by crossing the Knocknairling Burn and walking next to the now replanted forest to find the gap in the trees shown on the OS map. It was still there. I followed it until I appeared to be nearing the forest road and headed up to push through a final line of conifers to find ... a large stack of logs extending in both directions hard up against the trees. The forest road and the log pile I encountered from behind.

A short climb later I dropped down the other side onto the track. Beyond it a clear-felled area led for a few hundred metres to where the virgin Cairnsmore hillside began. I tried walking up the tussocked forest ride opposite, and comparing it with the debris and stump-adorned ex-forest area, but was uncertain which was the less difficult to cross. It was, however, all very dry apart from the deeper pool-floored holes hidden between the tussocks. Once past the felled area I decided that more forest might have been preferable. It was definitely the worst hillside I'd encountered for a long time. It was tussocks almost all the way to the top with a layer of dead grass hiding what lay between. It was dry and spongy underfoot with every footfall an adventure. Only a few discovered anything solid to bear my weight. Most found ground that compressed underfoot so for every step up I sank back most of the way back, and some found voids up to and a few times beyond knee deep. Though heather-clad areas and the occasional rib of rock gave more assured footing, the challenging terrain continued most of the way to the summit. And I never found a path to follow either there or back. It was a relief to collapse in the shelter of the summit cairn having felt I'd climbed over 600m instead of the actual 330, and I'd taken twice as long doing so as I'd expected. The view ENE over the small lochans on the summit

My contemplated diversion to the Rocking Stone was abandoned when I saw my route to it looked as though it had been prepared for forestry and I saw a digger busy adding more ditches to it, 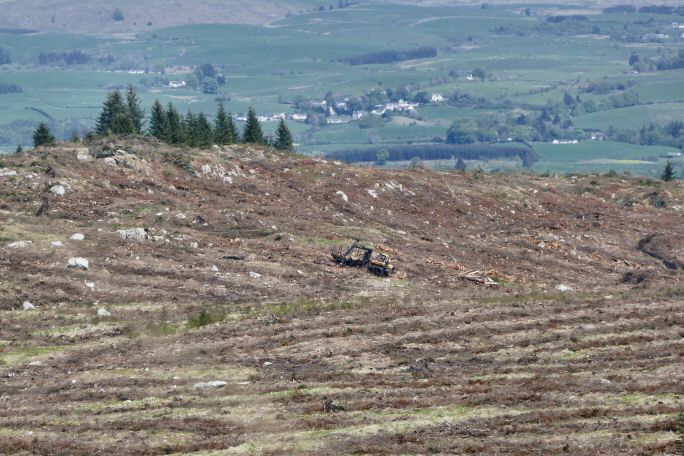 That only promised to make that area even more difficult to cross so I chose to give it a miss. Instead I took a more direct and steeper route down to the forest track hoping it might be easier. My descent route aiming for the gap in the trees

It wasn't. It was the same tough terrain as on the way up with the same uncertainty of just what that next step might bring, and not one to rush. I aimed for a gap through the trees and once back on the track climbed back over the log file and headed down to finish my walk along the A712.
It had been a successful day, but with a definite sting in the tail with what I thought would have been the easier walk by far the tougher. A reminder never to underestimate the fearsome Galloway tussocks! At least they had been dry.

Interesting read. Like you, I'd considered tackling Cairnsmore (BCoD) from the north but ended up climbing it from the west. I know folk say there's no such thing as a 'bad hill'. That's probably true. On the other hand, I sometimes wonder if there are evil ones? Like Cairnsmore. Horrible tussocky, wet, ground that felt like walking on a badly sprung trampoline. When I'd finished, my first thought was the north had to be the better approach; if only because it couldn't be any worse. Grateful to you for clarifying I wasn't missing much from that side

That's an excellent description (except it was mostly bone dry), and I wish I'd thought of it. It certainly sums up the experience!

Agreed. If I return to one of those two hills then Craignell would be my choice.

Both your hill reports were excellent as always.
I romped up Craignell at lunch time today, although the descent was a little bit trickier than I was expecting - the direct route isn't always the easiest.
As that didn't take as long I thought why not squeeze in Cairnsmore as I am passing it on the A712. I had a route plotted on my phone and as it was only 4km there and back it shouldn't be a problem - WRONG. I parked in a layby almost due north and then entered the forest, I like to think I am getting used to the Galloway forests but I am obviously not. The ground was very damp, spongy and tussocky as you described. I managed about 400m after battling with all sorts of trees, undergrowth and getting scratched to bits. So I abandoned that idea and went back to the car. Cairnsmore will have to wait for another day and be tackled from a different direction.