A grade 3 scramble on a very craggy little hill. Eight weeks, since we have climbed a hill, domestic crisis and health problems all getting in the way so a gentle but exciting start on this gem near Poolewe hopefully heralds better times ahead.
We left home at 8am and 10:30 we were starting out from the carpark near Tollie Farm. A short walk to the start of the route

Across the style and a short walk to join the path by the stream.
Fortunately the scrambling guide gave a map reference and a previous reccy meant we easily identified the start of the north west rib to the right of the steep orange chimney. 11:20 and we were geared up and ready to scramble.
Getting established on the edge of the buttress was, however, harder than it looked and after a short debate decided to use a rope and take the harder line rather than retreating to eaiser broken ground further to our right. Despite numerous cracks in the rock very few were suitable for placing proctection so this first crag was the only occasion on which the rope proved useful and even here it only protected the leader for the first few metres. The rope showing our line up the initial buttress

Above this first buttress were some easier slabs and then our instructions advised us to venture left to the rib. We ventured right and attempted to climb some steep heather,

one of our specialities 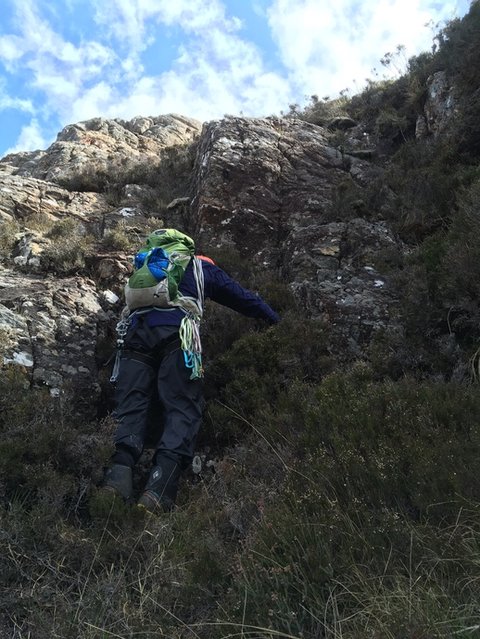 before retreating and traversing left.
The route now bore more resemblance to guide and some enjoyable scrambling ensued starting with a rocky traverse . All was going well until we tried to identfy an undercut groove with loose slabs which we needed to avoid on the left. We never did find it! We attempted to climb the edge of of a gully on the left instead and then abandoned this idea as we found it too steep to solo and lacking in protection. Abandoning attempt to climb this gully

Instead we headed right to a strip of steep heather. We are still not sure if the route instructions meant go right and not left or whether we were way of course! But we were soon able to scramble back onto the next section of rock! Heading back to the ridge from the heather 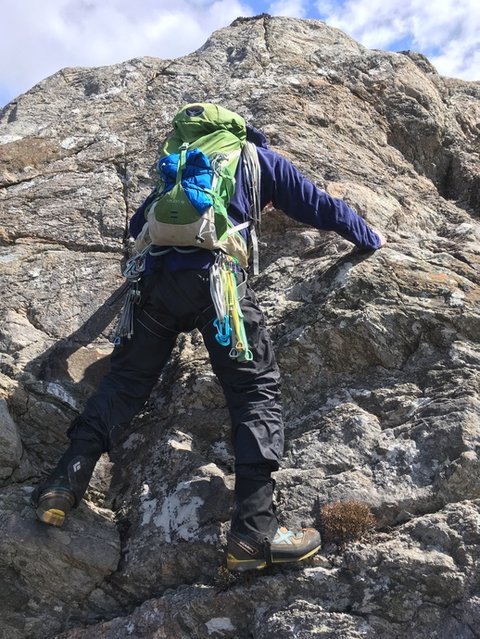 Restablished and On route (I think)

Above this were some easily identified slabs with a prominent brown band. The ascent up the middle of them was very exposed, my OH briefly ventured towards the centre and then returned to the side. I took the corner as far as I could, higher up it became more exposed, but much eaiser climbing. On the nice slabs with the brown band Nearing the top of the slabs

The slabs were the last of sustained scrambling so wepacked away the rope and at this point, checked with the GPS we were in the right place and headed for the North top. Lunch is well over due

Lunch is well over due An undulating walk to the true summit Hard to believe it is only 343m It may not be very high but Creag Mhor Thollaidh is an extremely craggy hill and the descent is not at all obvious. In poor weather good navigation skills would be required to negotiate the humps and bumps. Heading south, we followed along the edge of the crags for about 700m before making our way down the side of a gully towards a lochan on Allt an Leth-chreige. The walking across the top of Creag Mhor Thollaidh 16:16 Making our way down the side of the gully

.
Once we reached the Lochan we were able to follow the path back, admiring the crags all the way. 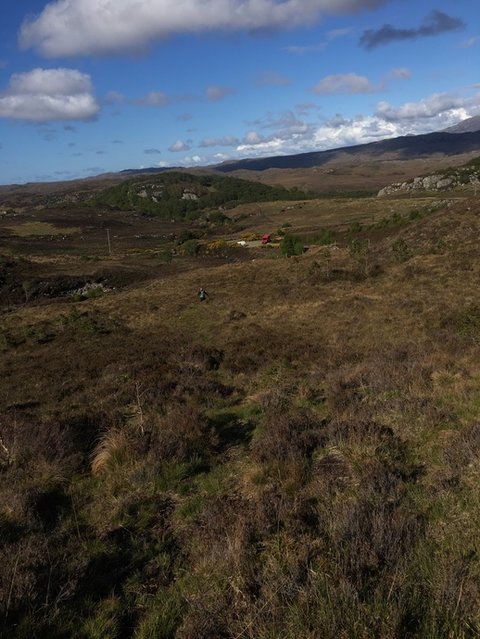 The scramble was short but sustained and despite being such a short walk eight weeks of inactivity and infection and we were both tired and achy, worrying that we never manage another graham let alone a munro!