I was away from WH for a week, traveling all over Scotland and ticking off new Munros, wild camping and long bike & hike included. Weather was great (at least till Saturday) and as a result, I have even more TR's to write now, so patience please, I'll need time to deliver it all!

Today's story will take us back to the unusually warm Easter break. On Saturday, we had a great day in Glen Etive and for Monday, we planned a good bike & hike trip to climb a remote Corbett. So on Sunday, we opted for an easier, shorter walk up Binnein Shuas, an entertaining Graham above Loch Laggan.
We had already done this hill, in combination with its twin, Binnein Shios, traversing both mountains and returning along Lochan na h-Earba. A superb expedition, which I can wholeheartedly recommend for a dry, sunny day. Views are unforgettable! But today, we took it easy, at slower pace, strolling up the western side of Binnein Shuas and descending north towards the shore of Loch Laggan, where a good track can be followed back to Moy.

Track_BINNEIN SHUAS 21-04-19.gpx Open full screen  NB: Walkhighlands is not responsible for the accuracy of gpx files in users posts
The day was hazy and we didn't expect good conditions for photos, but it turned out all right in the end

Our target hill from the bridge over River Spean:

We parked in the large layby just east of Moy (the usual approach for Beinn a'Chlachair & co) and walked on a good track towards Lochan na h-Earba, but just before the junction we left the beaten road for the pathless slopes of Binnein Shuas.
Looks easy by my standards!

The morning was partially cloudy, the tops of higher mountains still hidden in clag, but we hoped that it would all burn off:

Beinn a'Chlachair (left) and the small reservoir W of Lochan na h-Earba. The track to Lubvan can be seen to the right of the loch. We used this route to climb Aonach Beag and Beinn Eibhinn. There is a new, improved path (cyclable!) all the way to the crossing of Allt Cam.

Because on its own Binnein Shuas is only a half-day hill, we saw no need to rush it and strolled up at snails pace, chatting and joking, no pressure at all today, just us and this lovely wee mountain...
Panther lagging behind: After the initial 200m of ascent on grass and moss, we entered the rock zone

At some point, I stopped, astonished. I spotted UFO hovering over Geal Charn! Higher up, we found the rocky slopes a good playground. You can make the ascent of this Graham as easy or as difficult as you want About 100m below the summit, we entered a rocky "sanctuary". Of course, all scrambling is easily avoidable...

...but we couldn't resist having a closer look! Views still quite hazy, but on a good day, this hill is an excellent viewpoint, from the distant Ben Nevis to the west, to equally distant Cairngorms to the east. Today, a view of Panther on the ridge has to suffice Loch Laggan and Creag Meagadaidh behind: It was quite windy now and the wind had a chilly edge, after all it was only half April... An extra layer of windproofs and I was eager to claim the summit: The cairn is perched on a large rock. It was so windy now, we struggled to keep cameras steady for good photos! At least we had a wide choice of rocks to hide behind for our lunch break... Lucy celebrated her 83rd Graham We wanted to return along Loch Laggan, but the slopes to the north are to steep and craggy to try finding a route, so the only option is to continue east and drop to the col between Shios and Shuas. The traverse is full of steep sections and in misty conditions, careful navigation is needed to find a wide grassy gully, giving access to the easier slopes below.
Looking for the right route: With so many rocks around, the terrain is confusing. The arrow marks the upper end of the descent gully:

View back at the summit crags:

Amongst the chaos of multiple crags, I wasn't sure where the descent route was, thankfully Kevin had our old GPS track from previous visit to this hill, which made navigation so much easier.
Here it is!

The upper end of the gully is easy enough (a faint path can be followed)... ...but later on it steepens significantly and I'd advise care here, especially in wet conditions. Views to the neighbouring Binnein Shios, framed by the two lochs on both sides, are unforgettable though: No amount of rocky cliffs can wipe the smile of Kevin's face, he found his favourite hiding spot Despite being steep and overgrown with heather, this slope is negotiable: 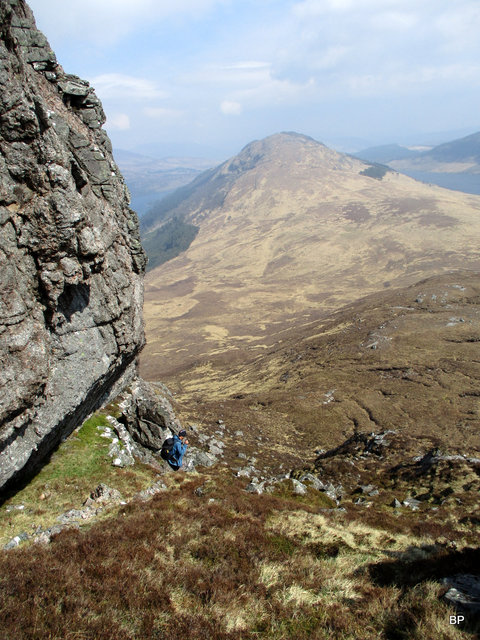 ..and looking back from below, I didn't understand what the whole fuss was about Once below the crags, the descent is now easy on grass and heather, some boggy sections, but after a long period of dry weather even the wettest bogs shrunk to puddles and were easy to jump over.
Simply amazing:

We turned left (north) over grassy ground and headed for Loch Laggan. This pano shows the fantastic view due north, with the loch framed by Creag Meagadaidh massif:

A man in his element: We headed for the edge of the forest. I was a bit worried about the fence, as I couldn't see a gate or a stile, but a nice surprise, the fence consisted of horizontal wires only. We took our rucksacks off and sneaked through without problems.
No fence will stop us! Kevin checking our position on the map: The forest wasn't dense and we easily found our way through the trees to the forest track along the side of Loch Laggan. The wind was off now we were protected by the woodland and we took a short break by the loch, admiring the stunning views across the water.
On the shore of Loch Laggan: Finally, it was time to follow the track back to Moy: a lovely stroll along the loch.

Looking back at "our" hill:

One could say that there are better, more interesting hills in this area, and maybe so, but Binnein Shuas is a worthy winner in the category of "small yet very entertaining"

We were back in the car in 5 hours, but we didn't rush it, so if doing Shuas only, one could do the circular route in 4 hrs if necessary. Not that I'd recommend a quick up and down in this case. This is a hill to enjoy rather than hurry.
...................
On the next day, the Easter Monday, we ticked off a new Corbett by means of our good, old bikes. TR to come soon

Re: Panther lagging behind

Always thought this looked like a good part of the world to explore, as always, your report has proved it is!