Dollar to Dumyat over the Ochils

Dollar to Dumyat over the Ochils

I had nothing planned for Saturday, but Jackie was working in Stirling for the morning. Seemed like a good chance to hitch a ride and do a traverse of the Ochils - long intended, but something I never get around to. Sadly the weather didn't look like it would play ball, but it didn't look horrific either.


Map.gpx Open full screen  NB: Walkhighlands is not responsible for the accuracy of gpx files in users posts
Having taken a bus through to Dollar from Stirling, I was on my way up Dollar Glen by 9:45am. The weather looked gloomy but at least it was barely raining at that point. I followed the footpath up through the glen past bluebells and interesting gorges, eventually emerging next to Castle Campbell. 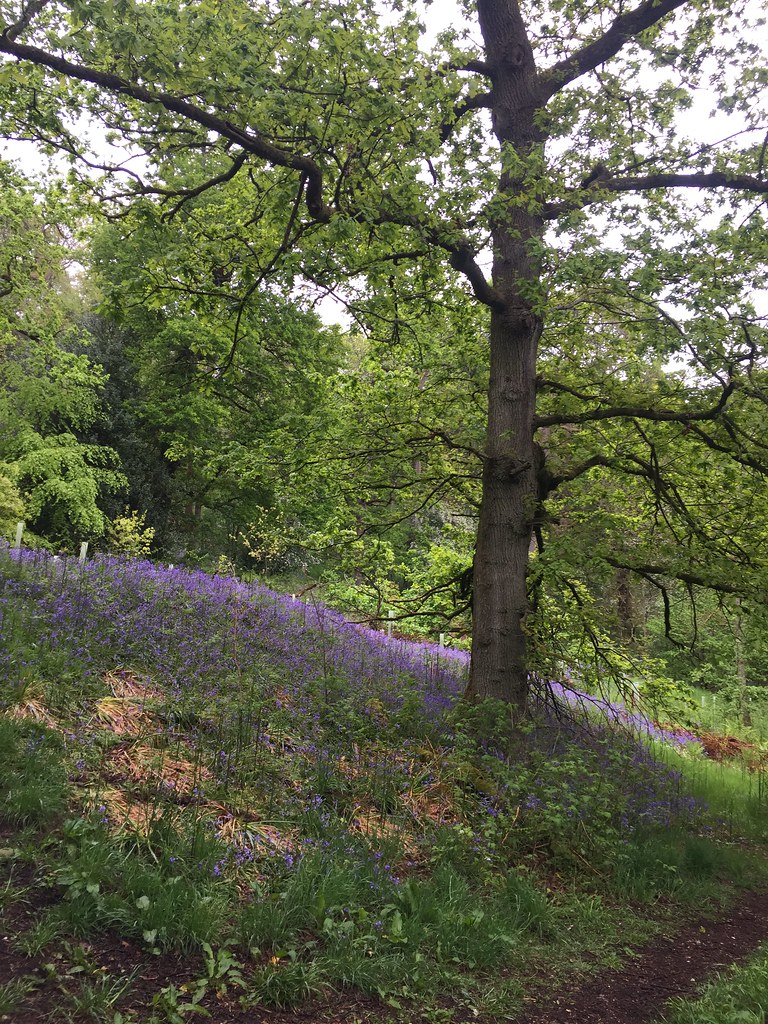 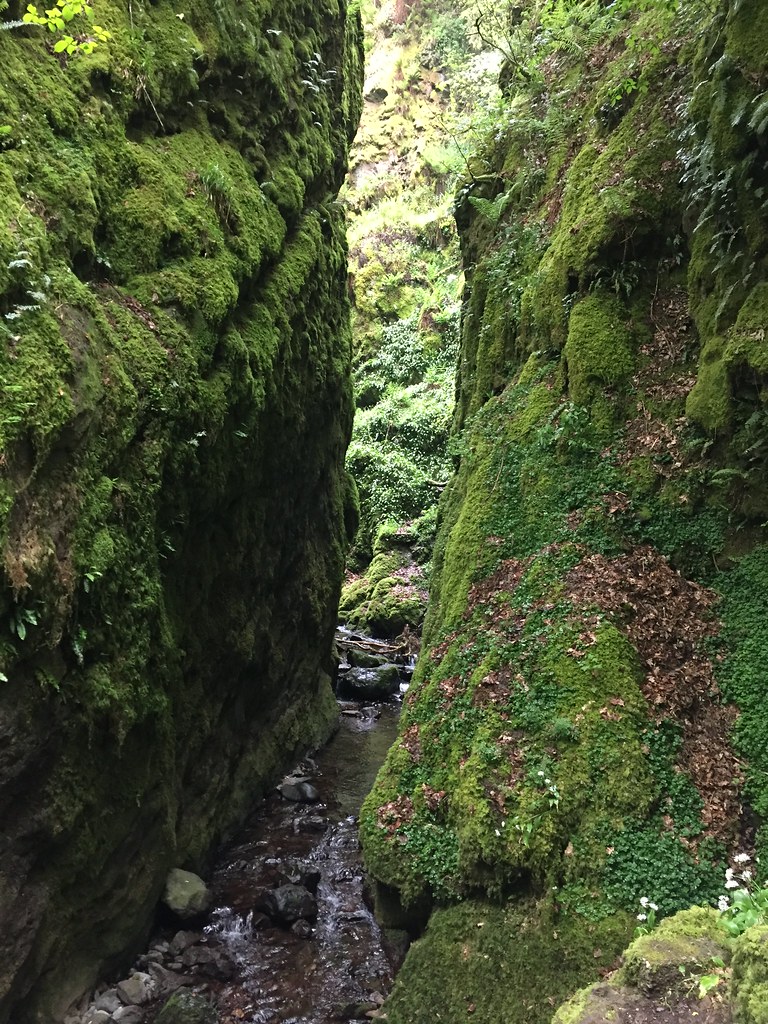 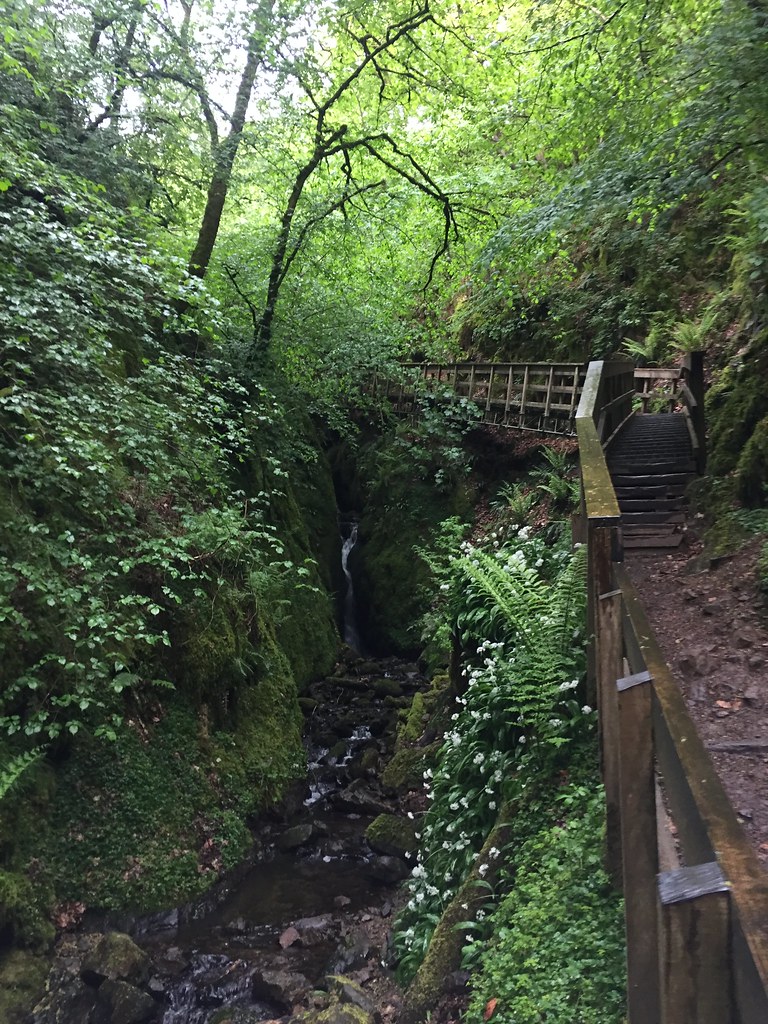 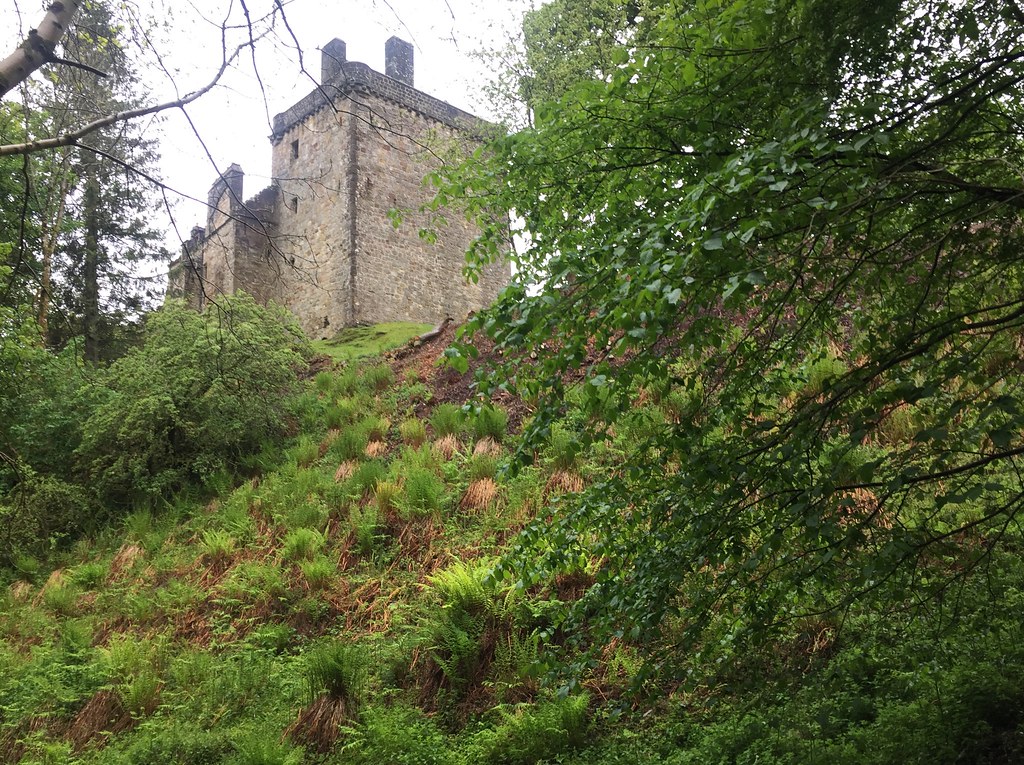 From here I followed the good footpath through towards Glendevon, taking a brief shortcut to reach a forestry track shown on more recent maps which led almost to the summit of Innerdownie. There wasn't really much of a track or forest here - the newly planted trees looked like a mixture, but not the usual conifer plantation, which was nice. The ground underfoot was dry, but due to wearing my old boots, swishing through wet grass got my feet wet in no time at all 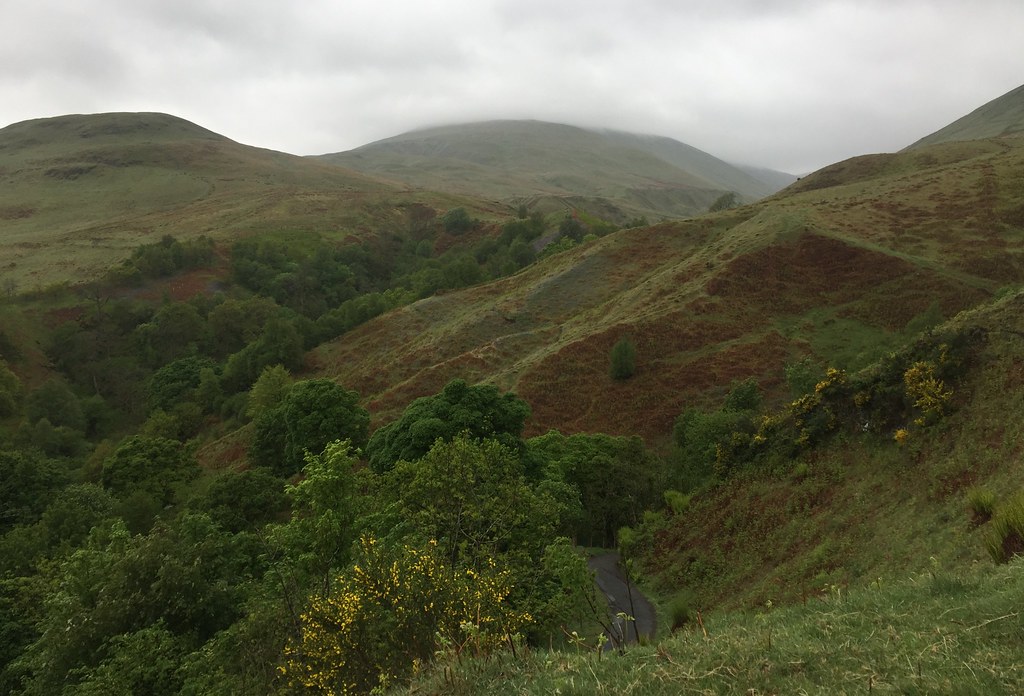 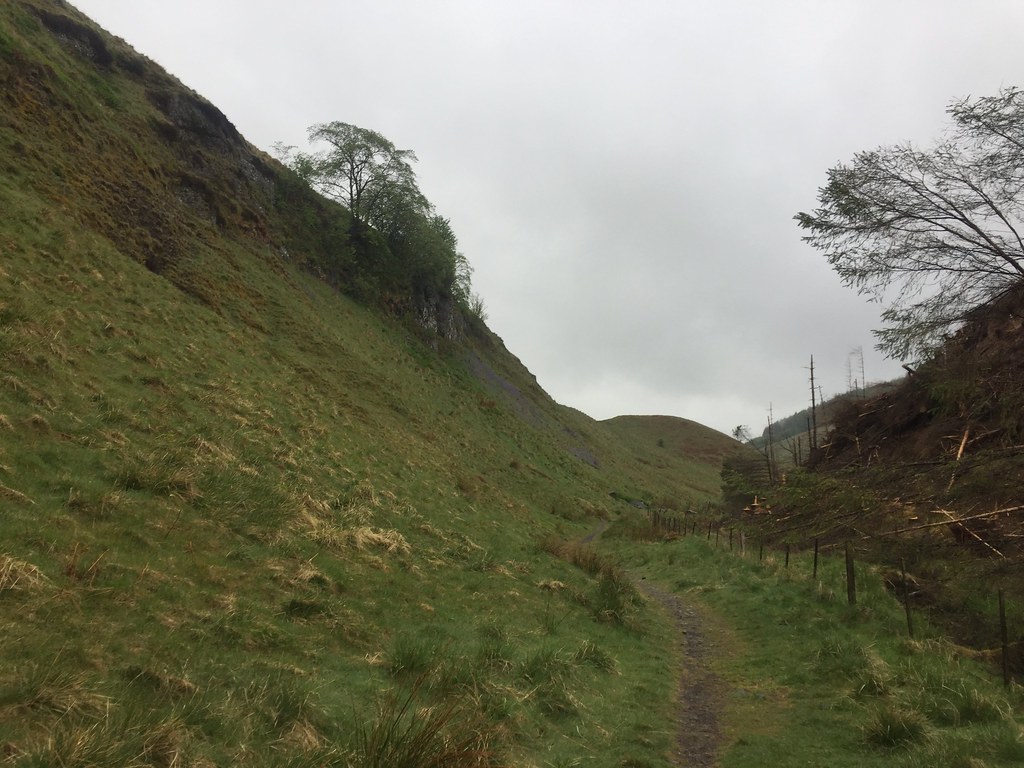 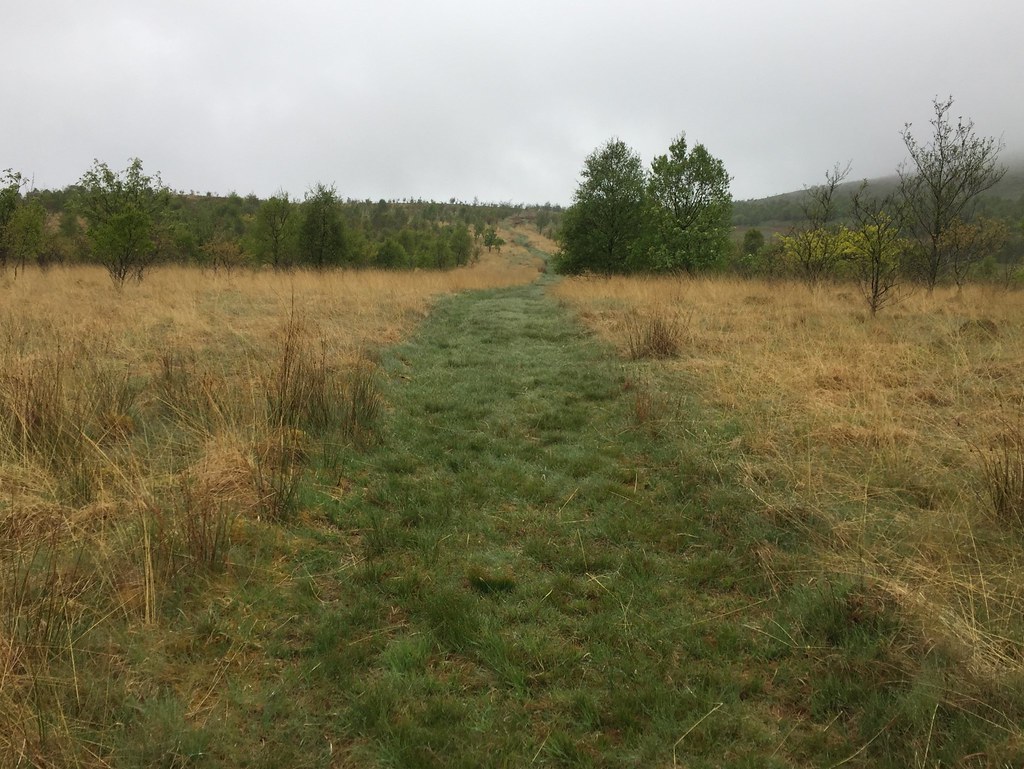 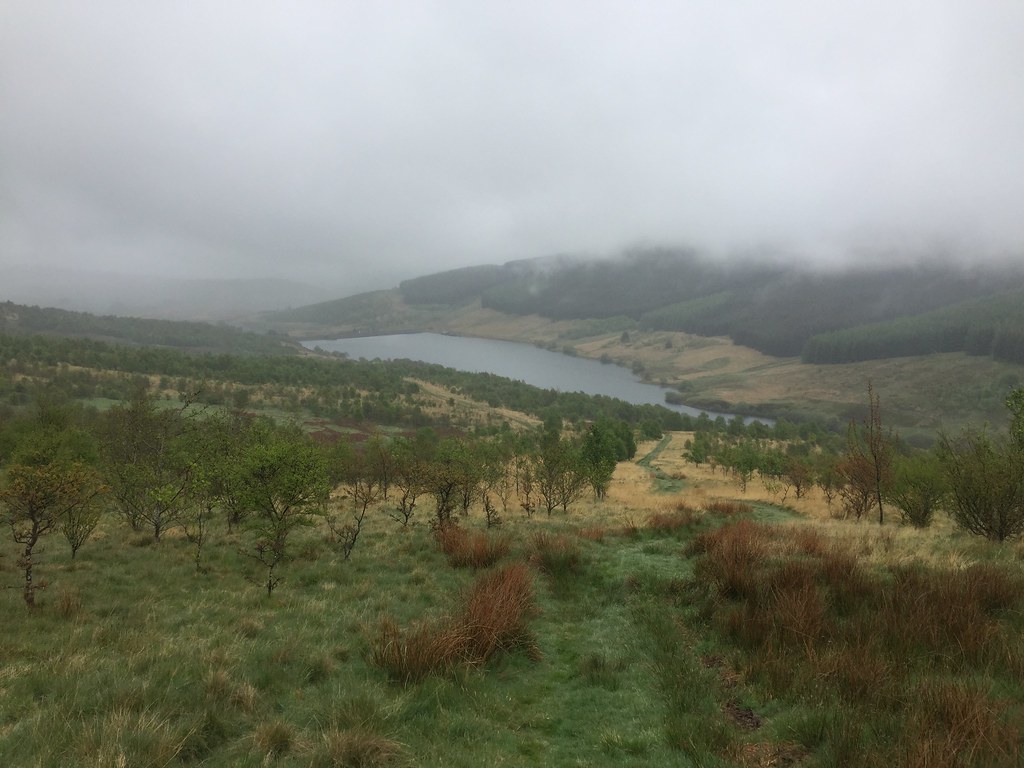 Once on Innedownie, the going was easy across Whitewisp and Tarmagie, passing a couple of large groups (one DofE, the other a women's walking group). 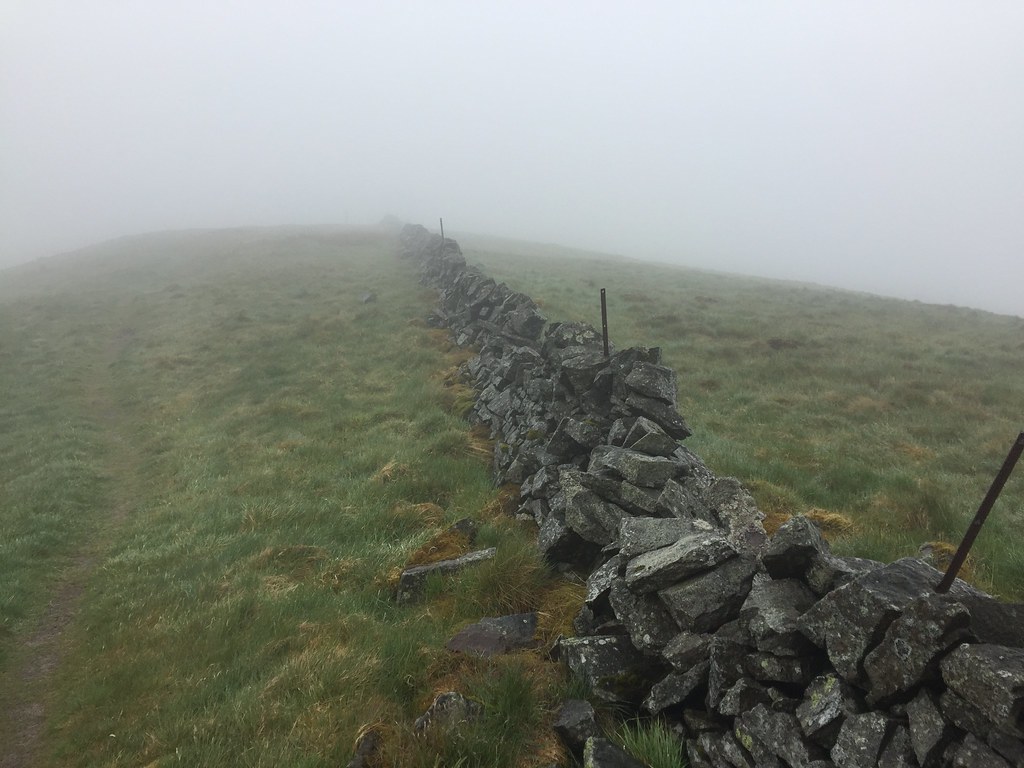 I decided to skip out Kings Seat Hill as I had been up there before, it was out of the way, and there would be no views today. The going was a little pathless over Cairnmorris and Skythorn Hills, but I was soon on an obvious route again on the back of Andrew Gannel Hill. The cloud looked to be lifting for a short time here, but by the time I reached the summit there was nothing to see. Oh well, on to Ben Cleuch then! 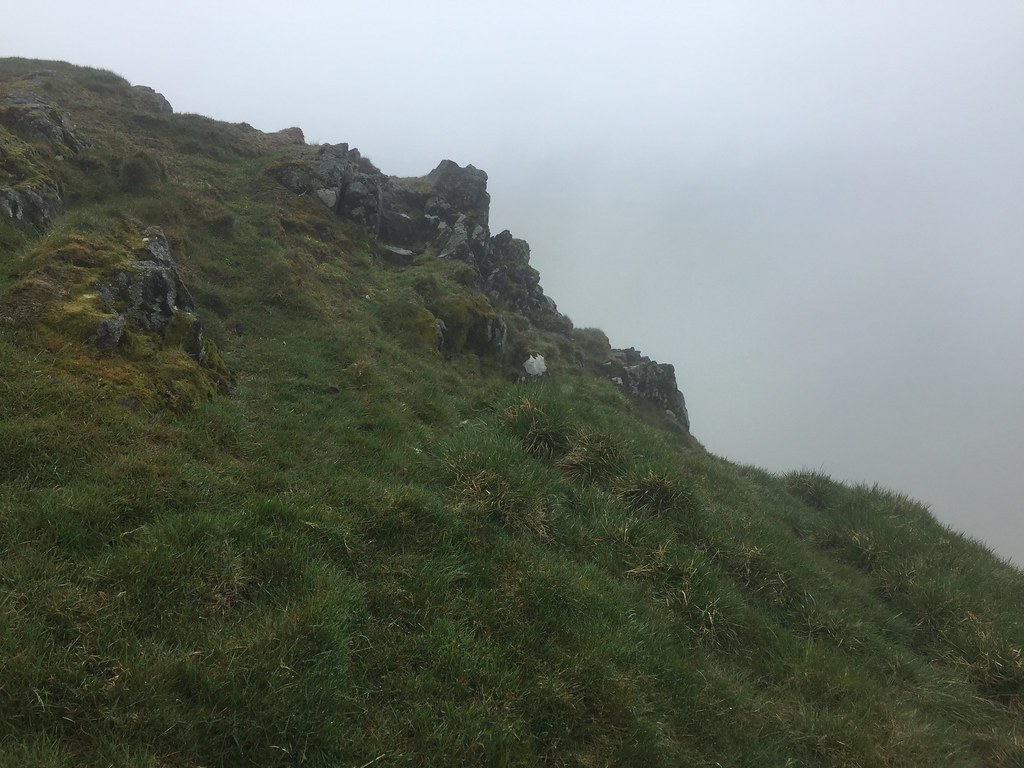 The rain didn't really amount to much over the day, but it was at its heaviest (with the most wind) on Ben Cleuch. Nevertheless I managed to dive behind the summit shelter for a few minutes to eat lunch. I was grateful for the descent down to Ben Ever to escape the worst of the wind though! Fortunately it was an easterly, meaning it was broadly behind me all day. 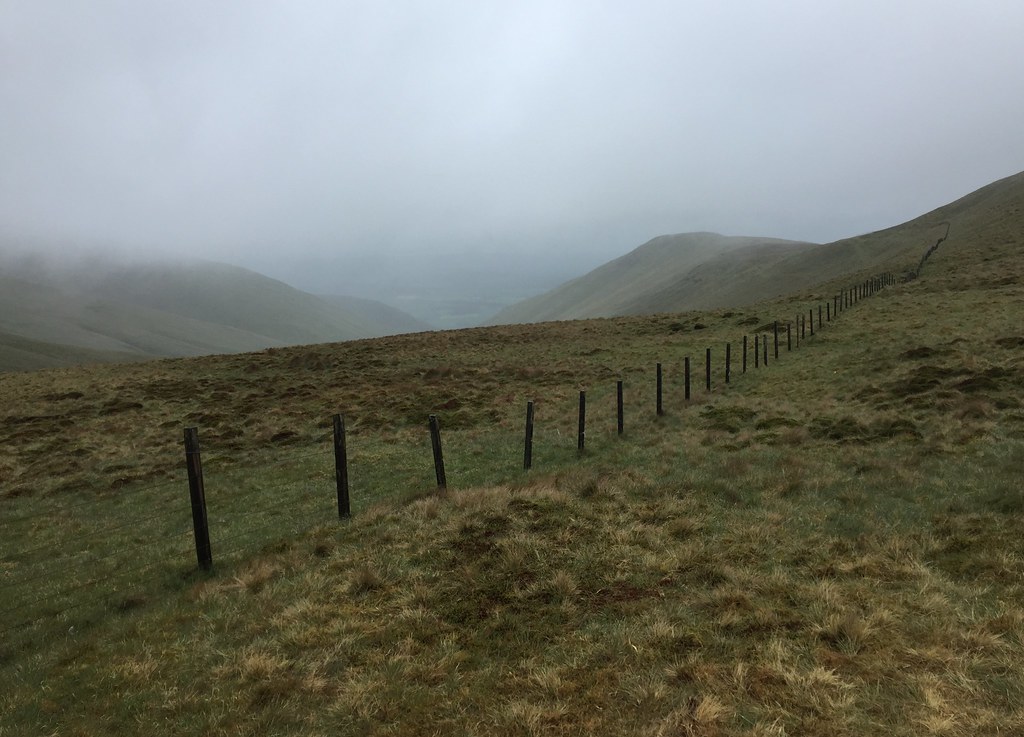 Descent to Ben Ever

There were some views available around Ben Ever and the traverse back towards Blairdenon Hill, but little of photographic interest. The hills to the west appeared to get less defined and more haggy than what had come before. I was passed by a fellrunner on Ben Ever, but ended up catching him up again on Blairdenon Hill, probably due to him going a bit off course in the intricate terrain. I have to admit I went for a 'hit and hope' style of navigation here, but it seemed to work.

West of Blairdenon, things became haggier and more tussocky still, and I lost the path for a bit. Originally I had planned to drop down over Big Hunt Hill and Loss Hill, but by this point I couldn't wait to get out of the clag, so aimed for the shortest route towards my next stop, Dumyat. 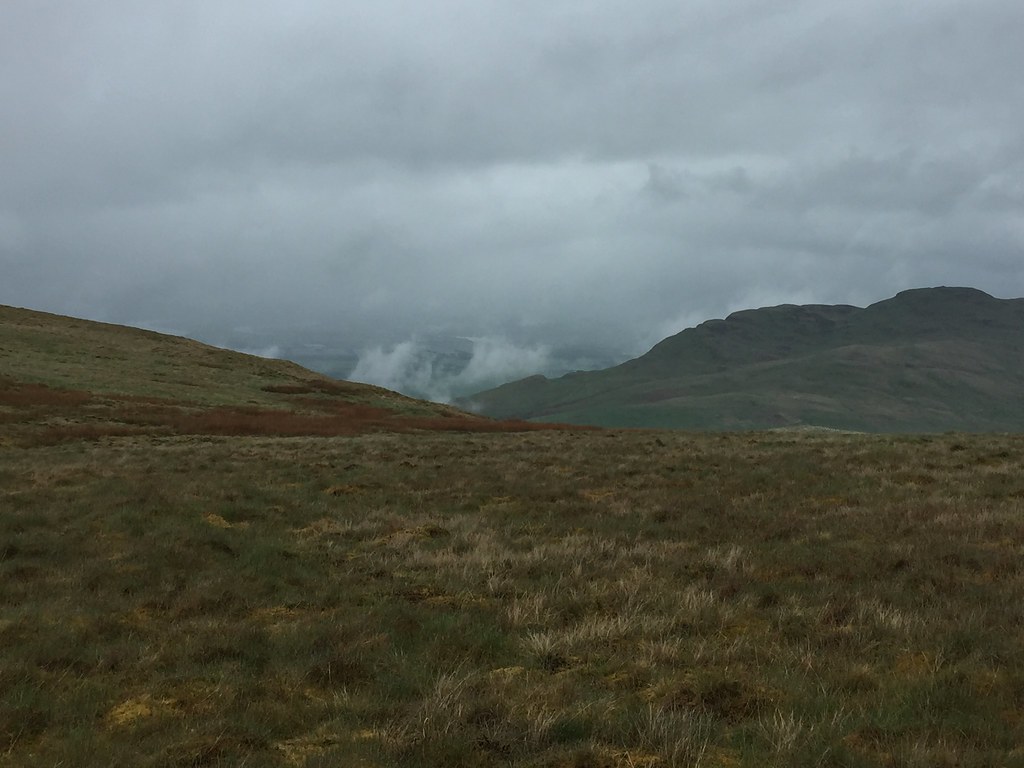 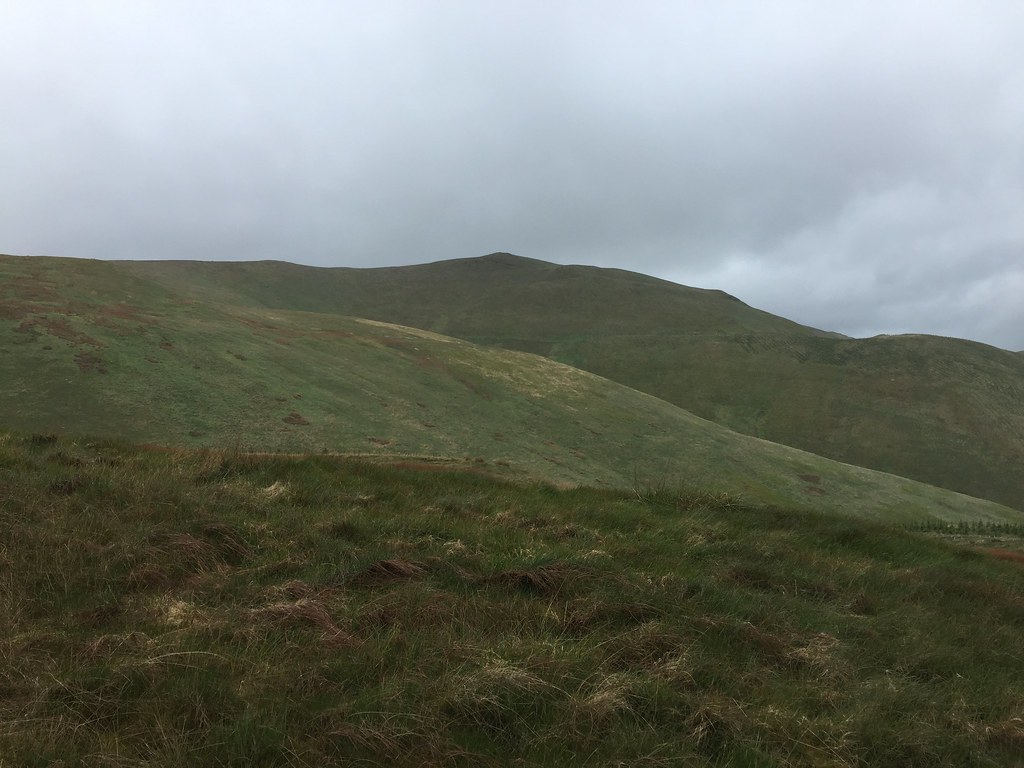 I ended up dropping down between the Second and Third Inchna Burns, which had newly been planted with rows of conifers - a rather depressing effort compared to what had been done on Innerdownie. Lower down I picked up a track and path which led me more pleasantly towards the Lossburn Reservoir. 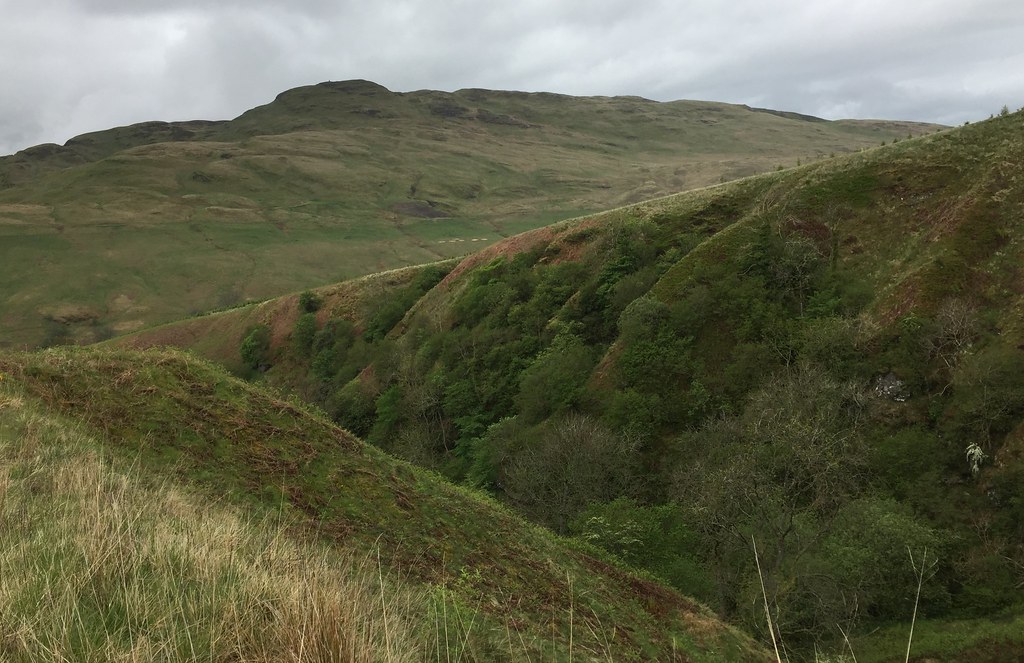 Dumyat from the Third Inchna Burn 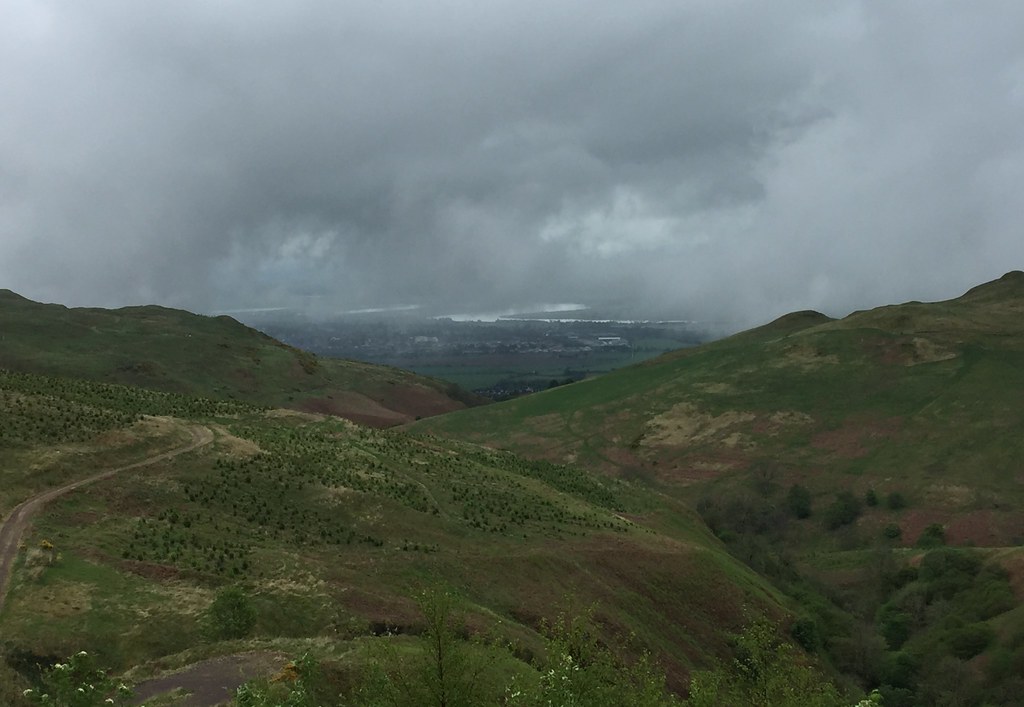 Glimpse of the Forth 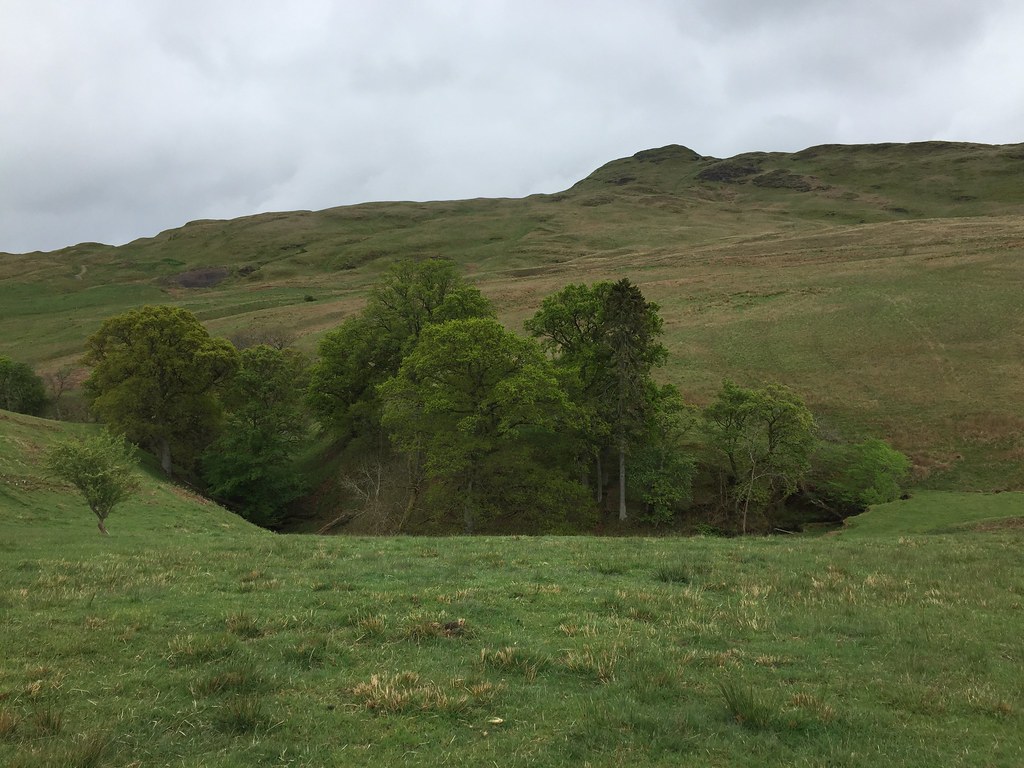 On the other side of the reservoir there was an obvious path towards Dumyat, and the weather began to look up, with some impressive cloud formations back over the higher Ochils. 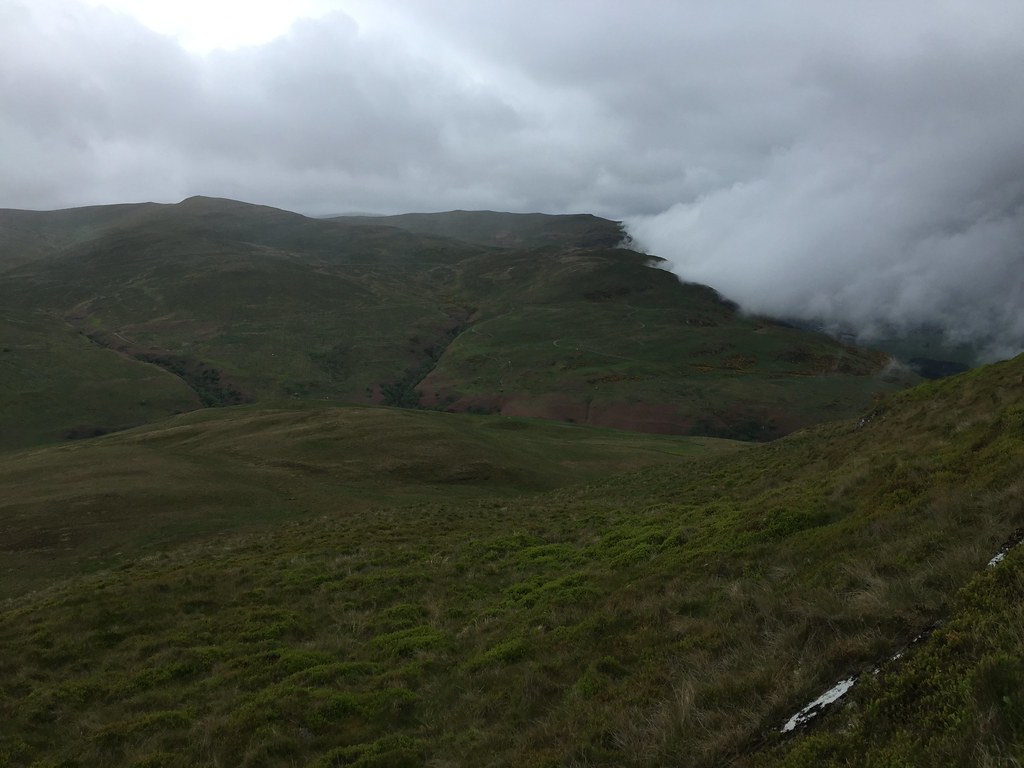 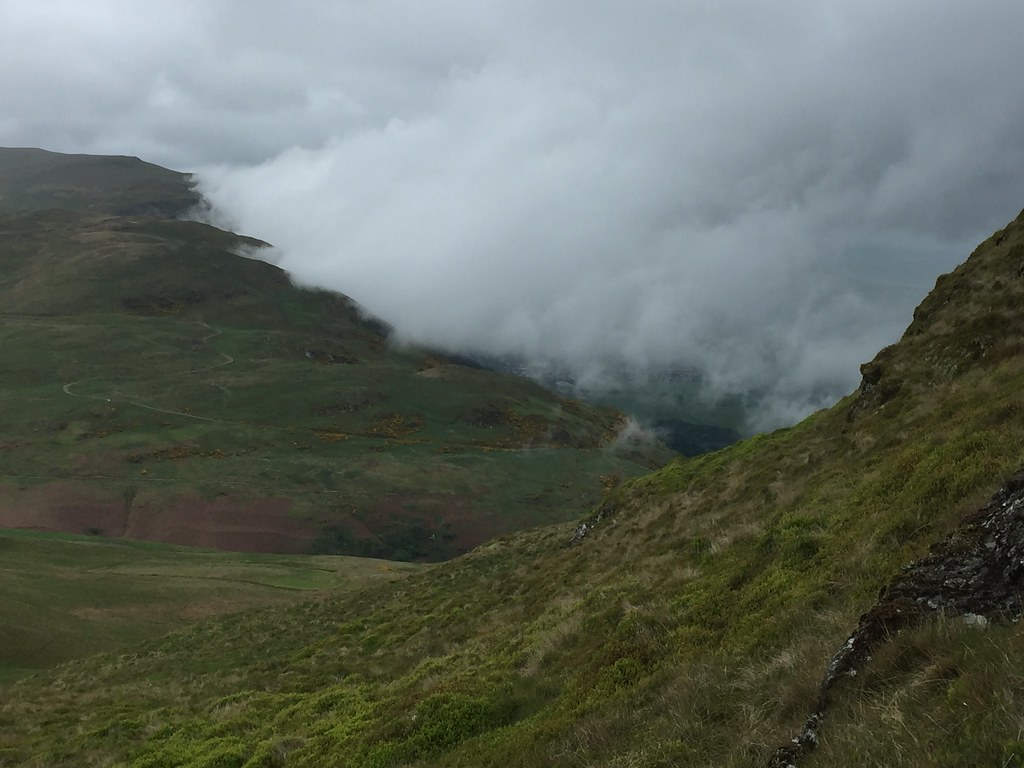 I burst onto the summit just after joining the main path and suddenly all was busy. Great summit though - one I had been looking forward to for some time. Spectacular holes were breaking through the clouds over Stirling. 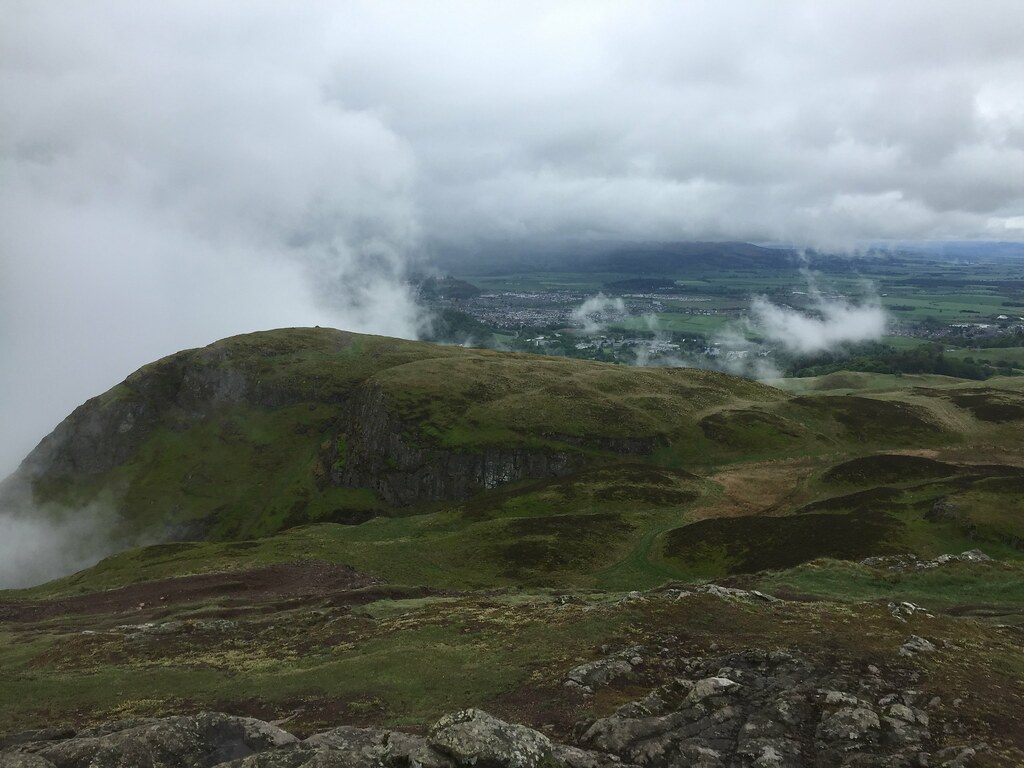 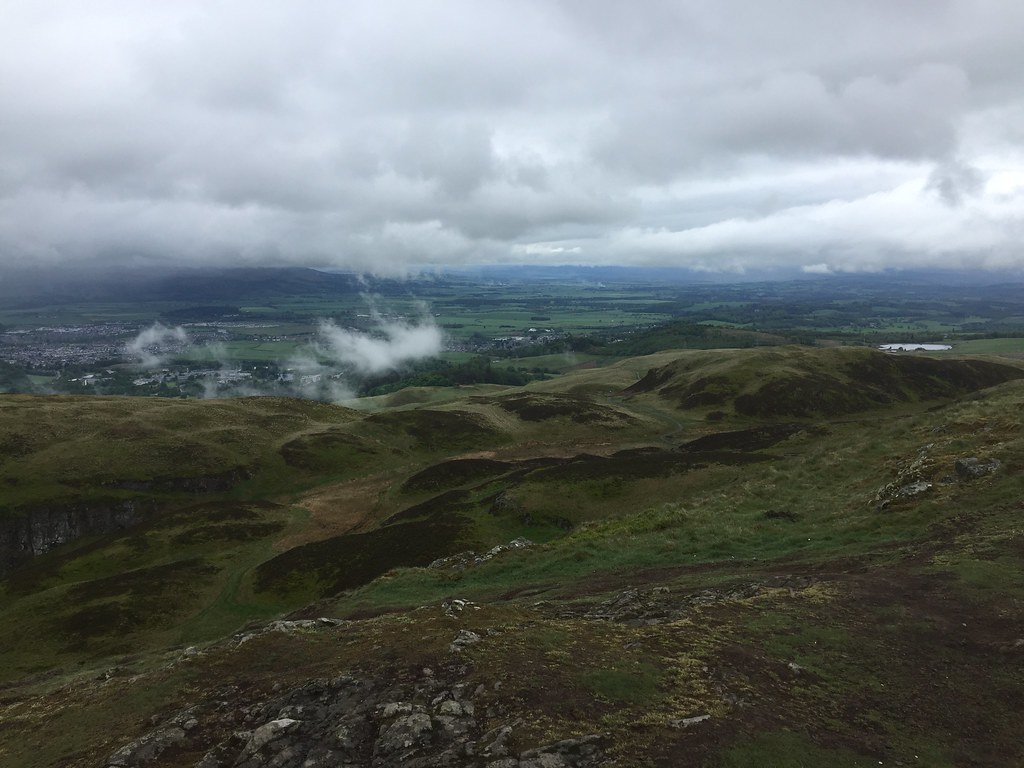 I left the hoards behind and dropped down to Castle Law on a much less obvious path off the southern nose. A quick wander over Castle Law then it was down towards Sheriffmuir on a combination of the new and old path. 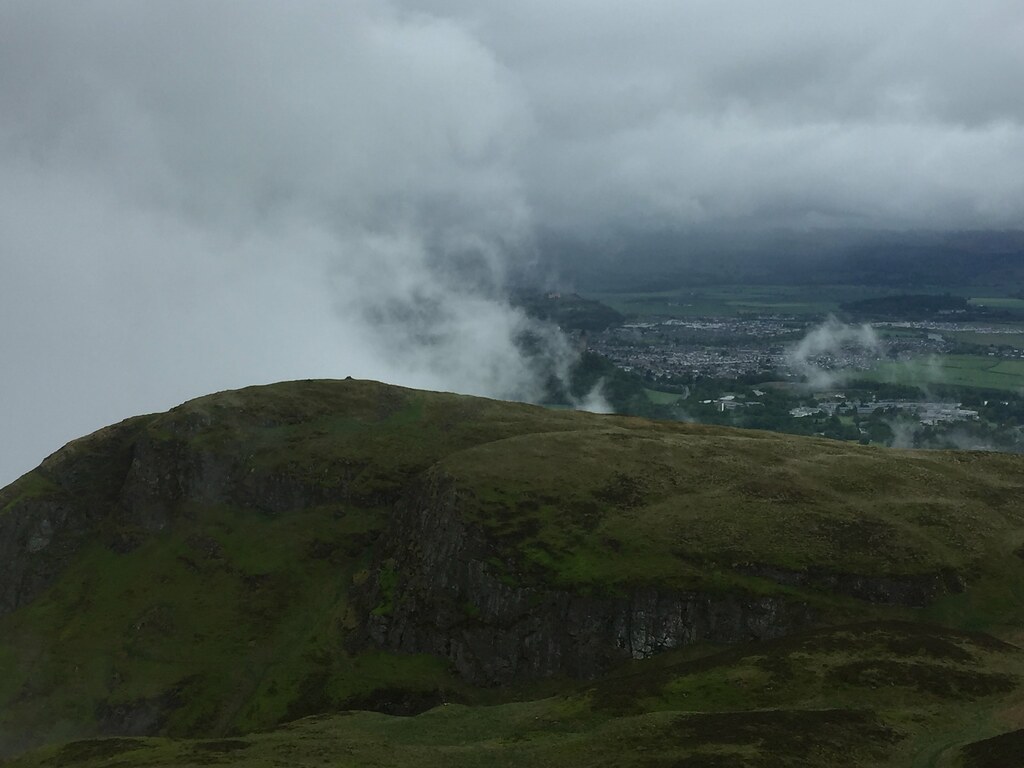 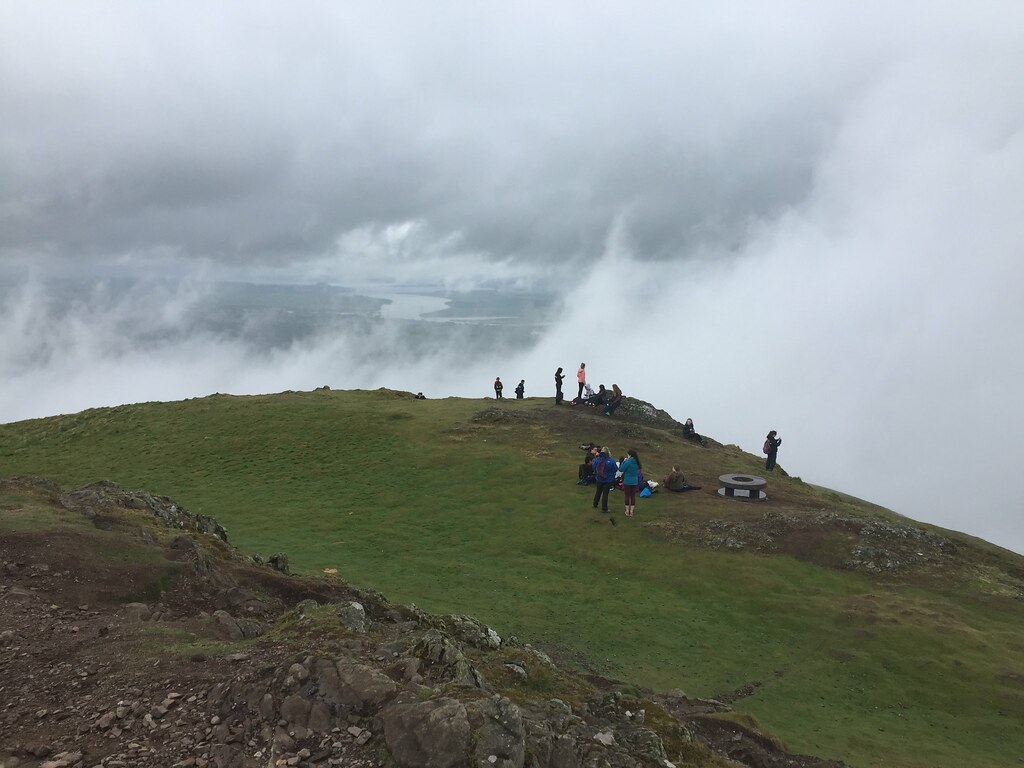 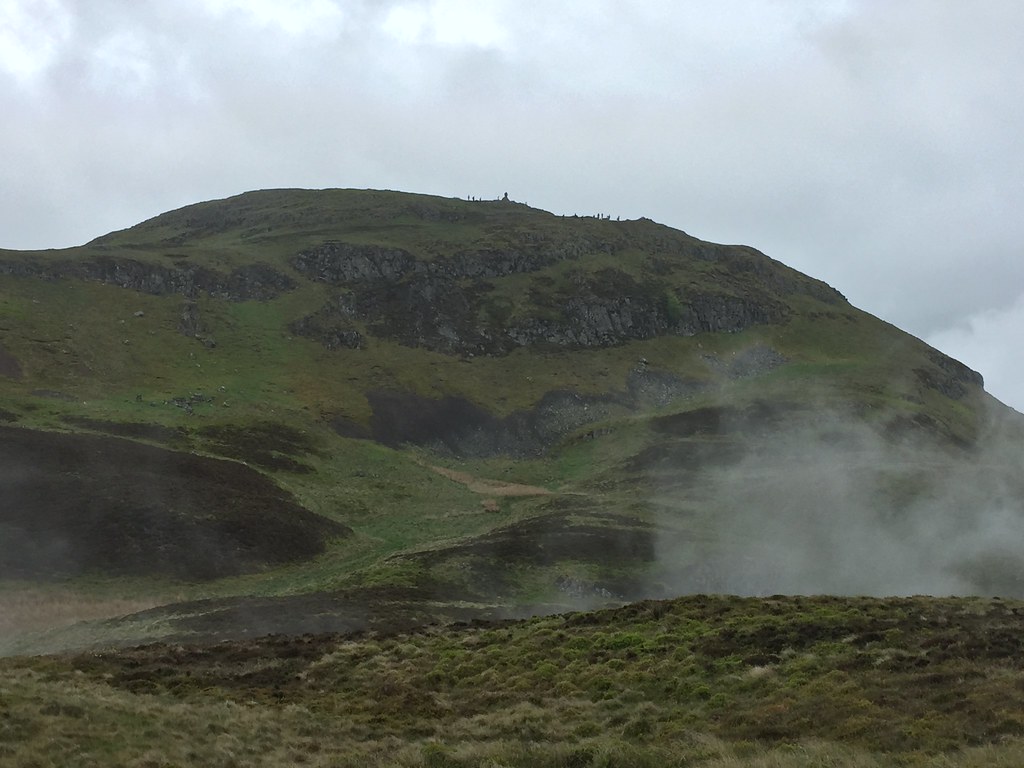 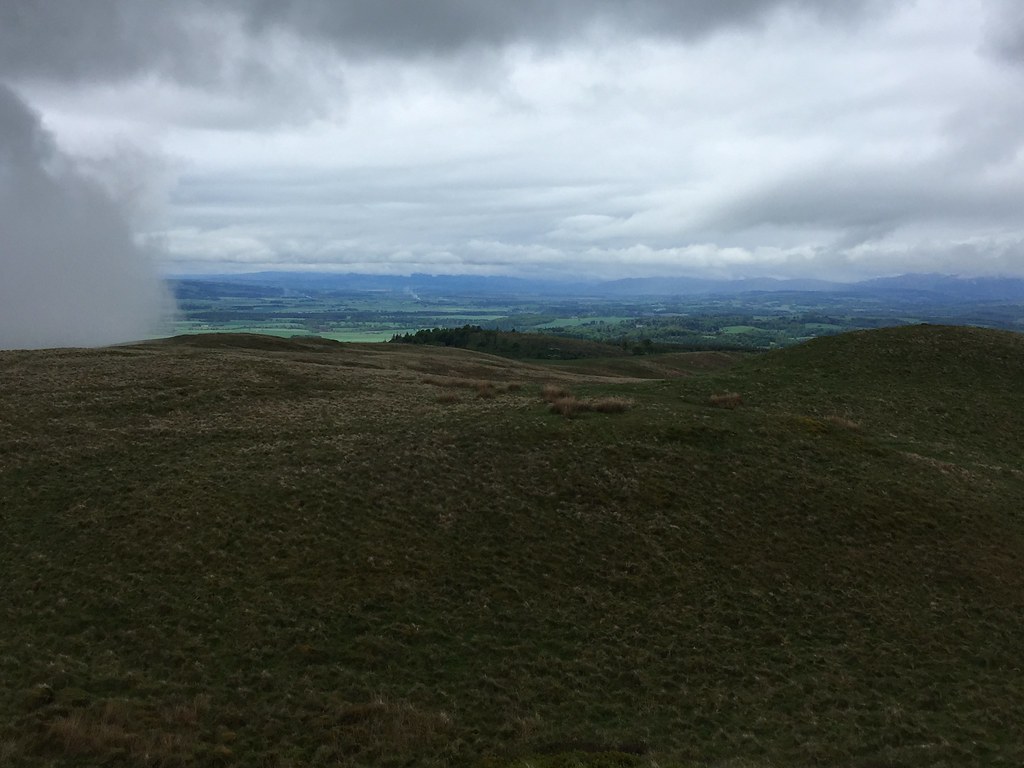 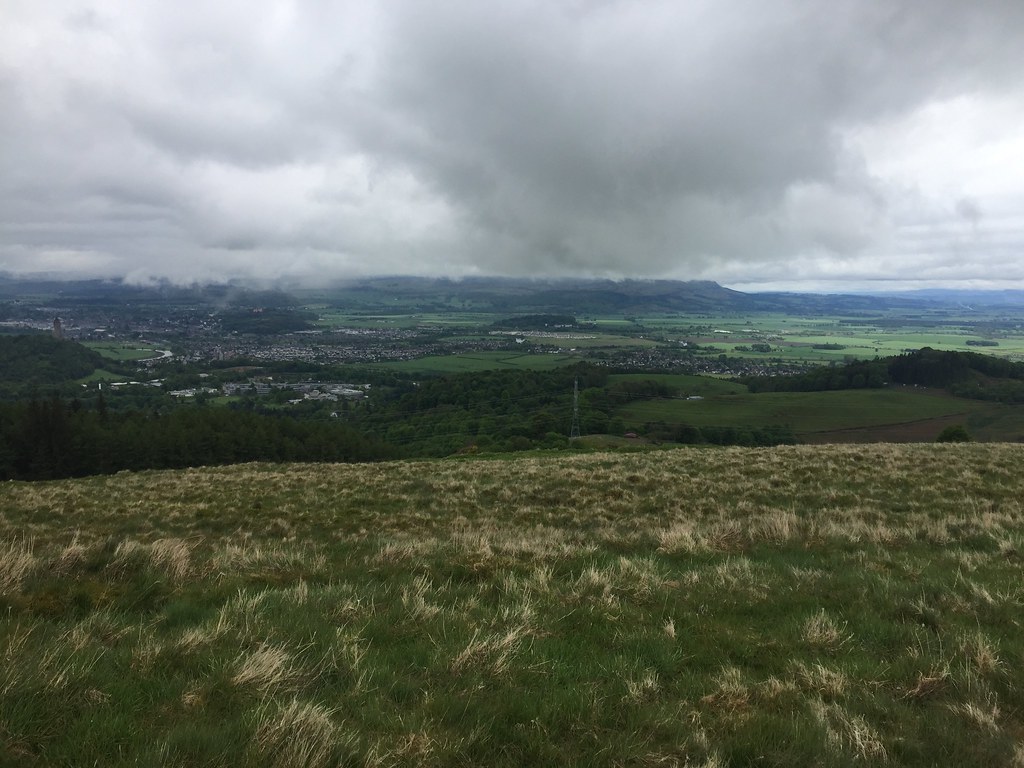 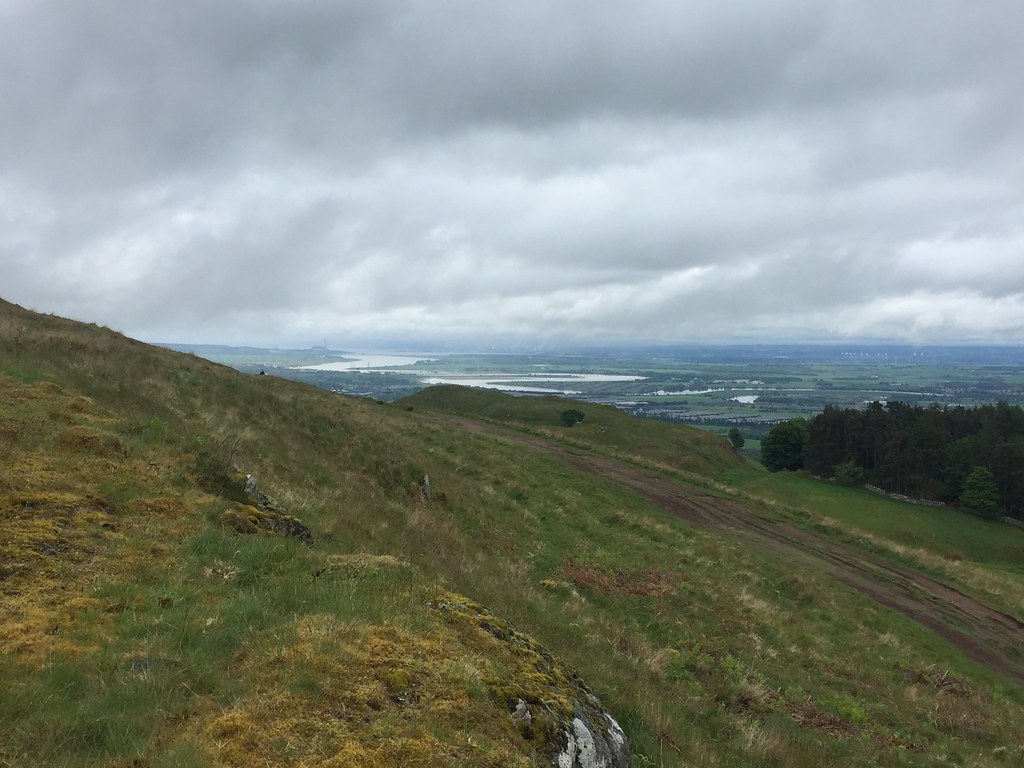 Great timing - Jackie had finished for the day and arrived at the carpark about 5 minutes before me for the journey back to Glasgow. She would probably have rather been out on the hills, but didn't really miss much weather-wise!

Shame about the weather but at least you didn’t have to work!

Nice work on getting Dumyat included - I was shattered by that point on my round, although did have King's Seat to contend with! Definitely a moody day for it but adds to the experience! (Small note on those conifers to the west: Jerah will be one of the largest private forestry plantations in Scotland once it's fully grown; although a decent smattering of it is broadleaf, I doubt it'll compare to the Innerdownie side as you say!)

I've done variants of this in the opposite direction, largely due to the superior ale availability when you end in Dollar. Wandering the ridges to Ben Cleuch from the west has a fascinating indeterminacy as you suggest.

Incidentally I felt I was stalking you in winter as I saw that in quick succession I'd done Vorlich and the Drumochters the day after you. I saw what must have been your footprints on Sgairneach Mor but felt I took a better line!