A senior moment on Stob Ban.

A senior moment on Stob Ban.


When we did the Grey Corries last June we didn't include Stob Ban, we weren't too bothered at the time and promised ourselves we'd travel the bumpy approach track again and do Stob Ban as a single, the only negative that I could see was the four mile walk to and from the Lairig Leacach bothy.

I managed to get the car up to the place walkhighlands suggests is a good place to leave it, the track is every bit as tricky to drive on as is mentioned in other walk reports

but you can weave your way around the pot holes without scraping the bottom of the car, it just takes a bit of time

After making sure there was room for at least another car we got the boots on and off we went. 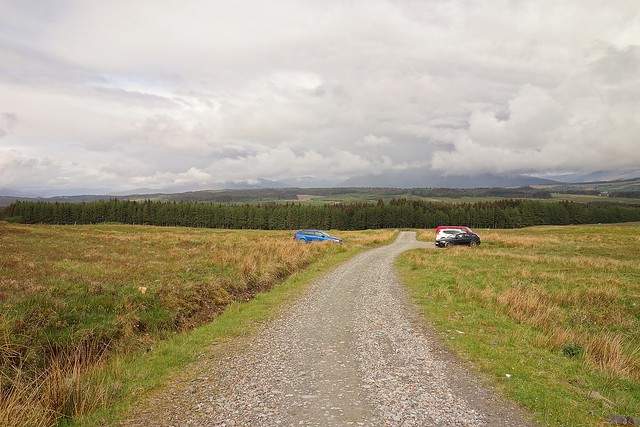 And the way forward 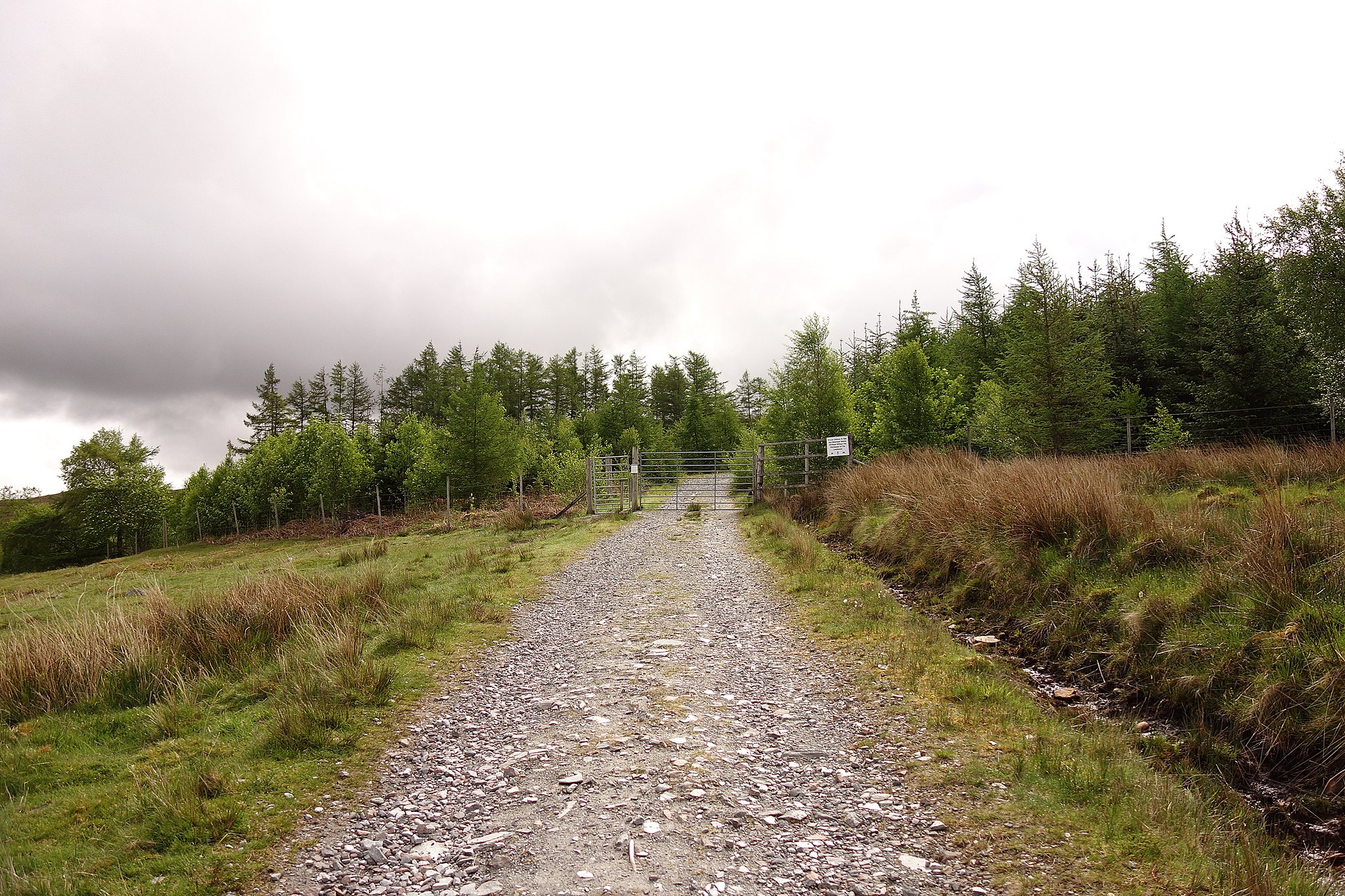 The first stop was to say hello to the Wee Minister, a pat on his head and a photo we hoped for good weather, then we were off on the trudge to the bothy. 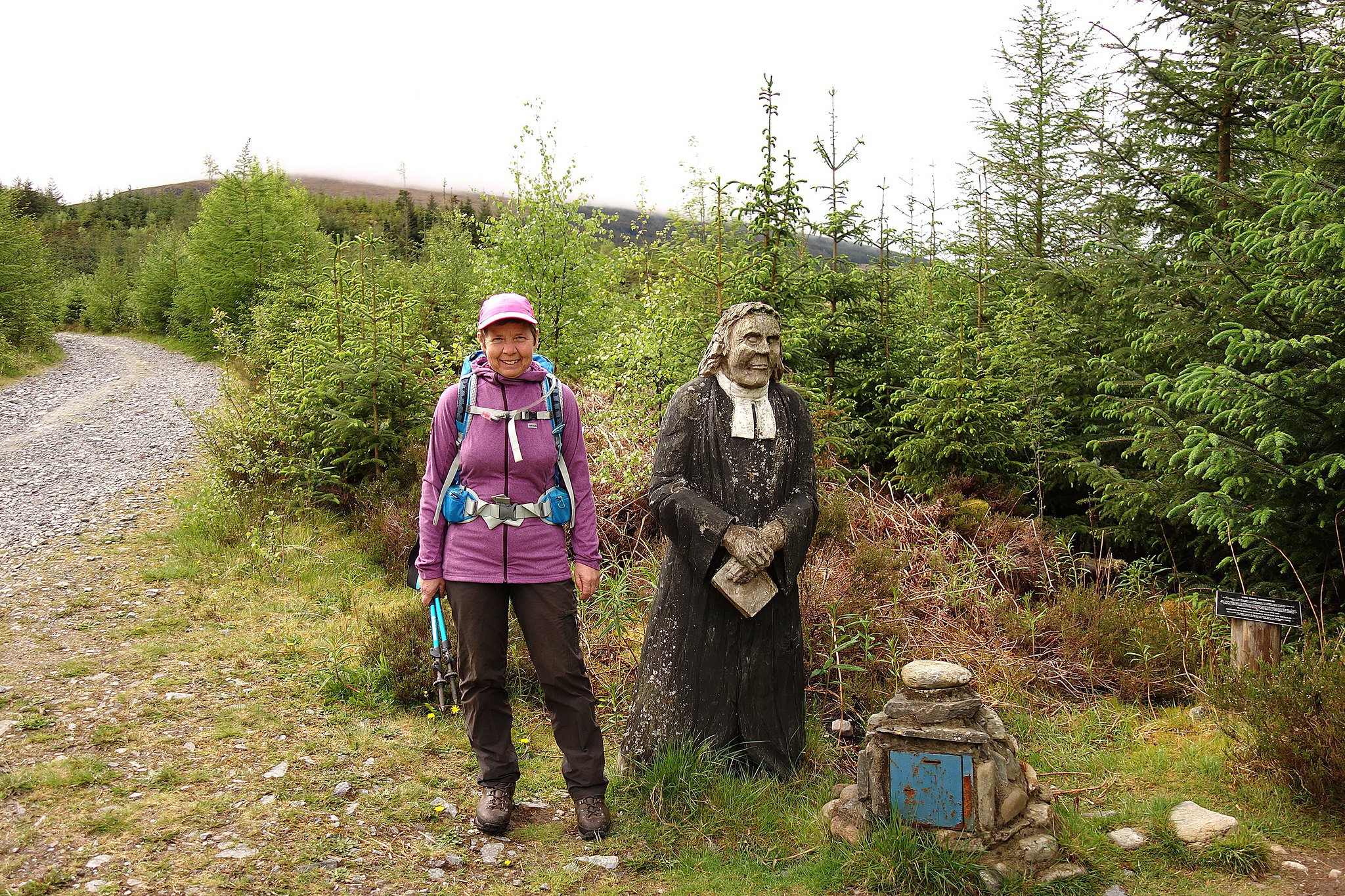 The track is well made all the way, if we were experts on a mountain bike we'd have cycled this bit, It took the best part of an hour and a half to walk it, as progress is made the steep sides of Cruach Innce and Sgurr Innce are on the left and were free of cloud, on our right we had Stob Coire Gaibhre and then Stob Coire na Ceannain, their slopes disappearing in the low cloud, we didn't get to see their heights until we were on our way back.

As we got closer to the bothy Stob Ban presented itself 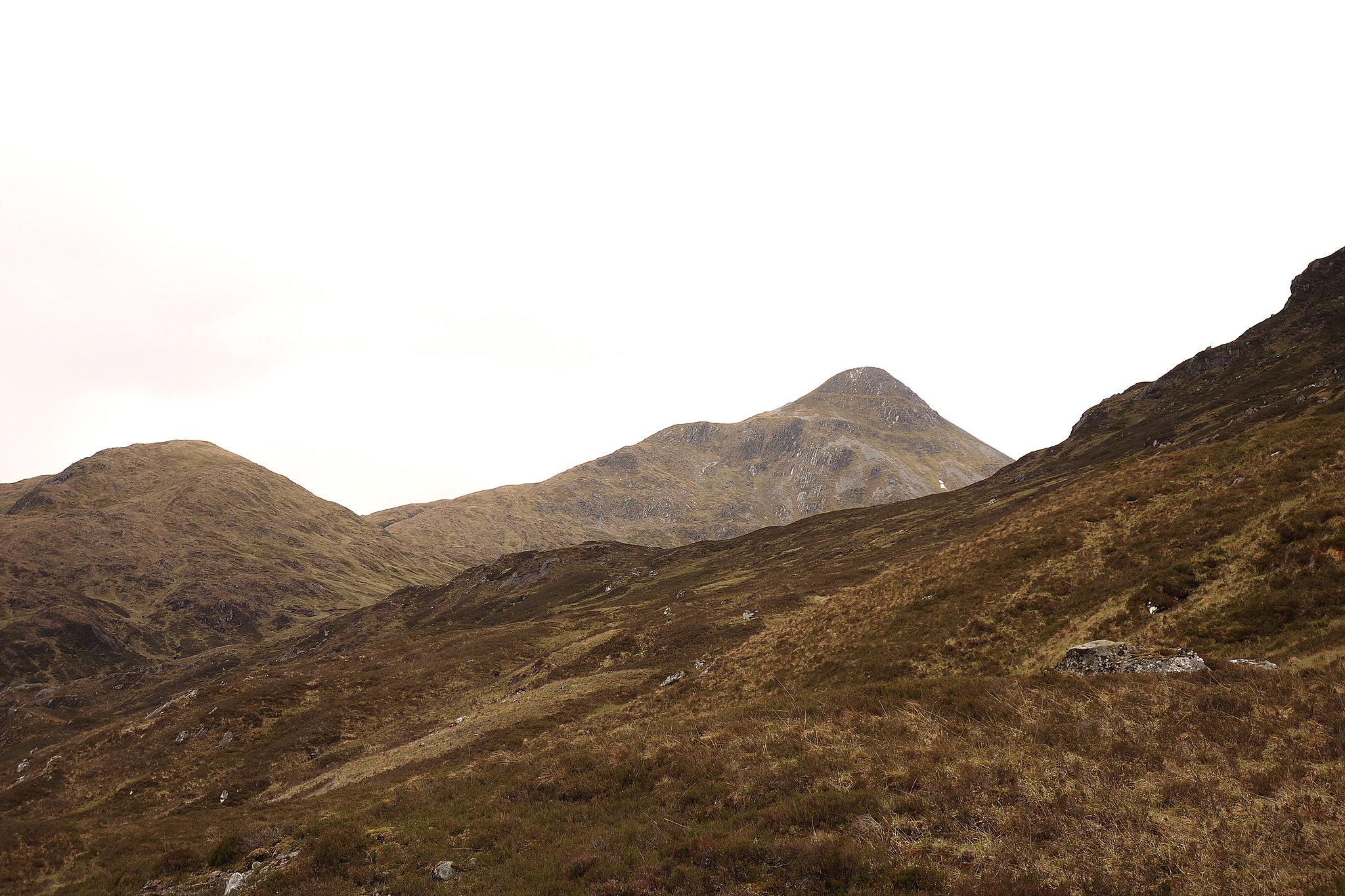 When we arrived at the bothy we had a quick bite to eat, I saw a path at the back of the bothy leading up the right hand side of the Allt a' Chuil Choirean and decided that was the way to go so that's the way we went. The higher we got the steeper the sides of the burn got,
Denise said,
"Are we right here, it's going to be difficult to get across to the other side by the looks of it?".

"I think we're ok, it says the track fords the Allt a'Chuill Choirean which could be difficult in spate so cross it on an old bridge a bit higher up, I'm looking for the bridge"

"Why, the burn isn't in spate"

"Yeah, I know, I just wanted to be different, the bridge must be higher up than I thought"

Denise has a quick look around,

"Do you think it might mean that bridge away down there?"

"Err, ooo, I missed that, it makes sense now, I never thought to check sooner"

Off we went, aiming for the bridge and the right path

We re-traced our steps and went across the bridge, it is a bit delapidated but it's good enough to support anybody who ventures across it.

Now on the right path we gained height quickly. On the ridge the path is good, there are one or two soggy bits nothing that a well placed boot couldn't avoid. 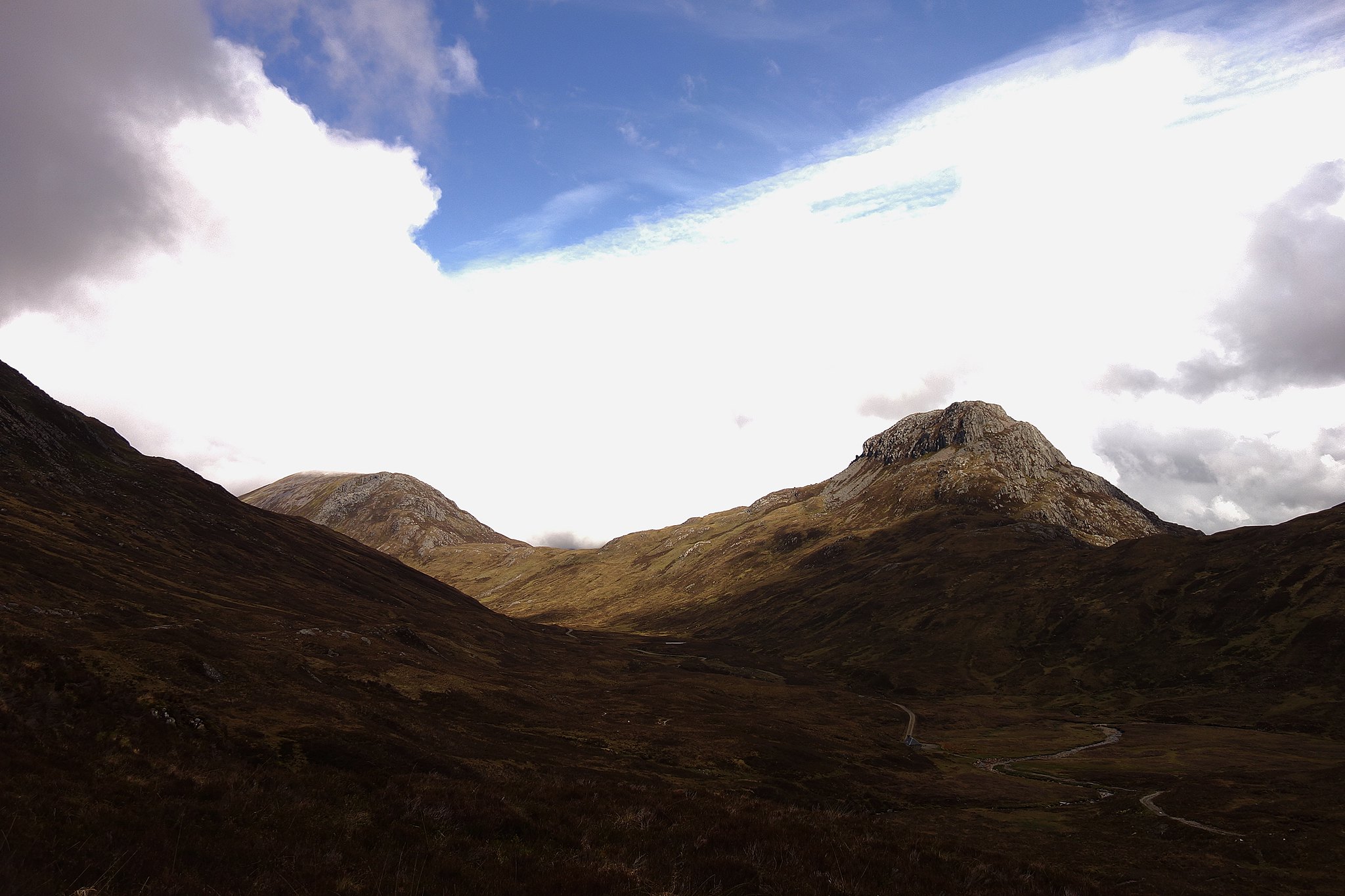 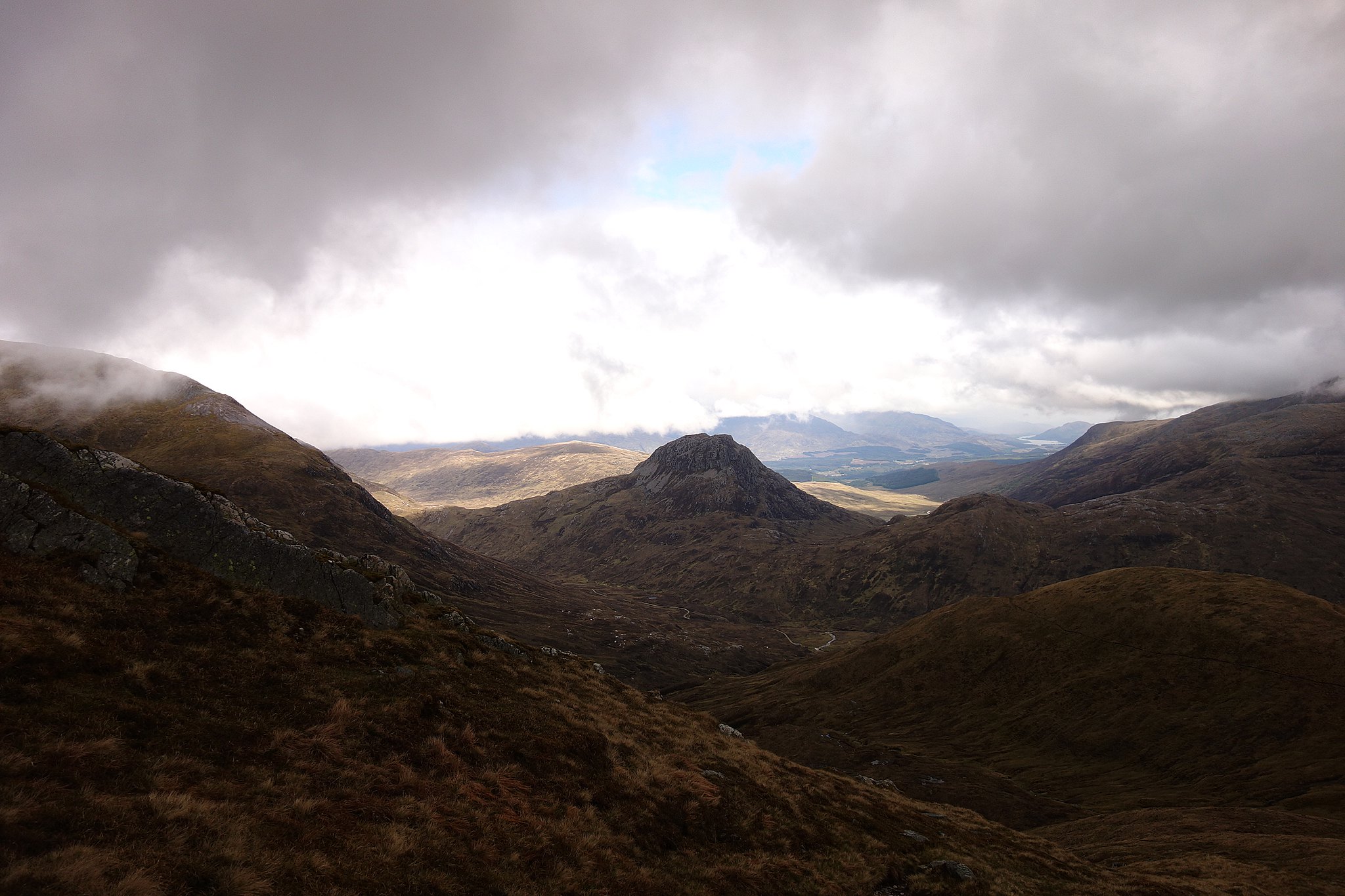 One day we'll visit those two they look pretty interesting.

The path traverses the lower slopes of the 769m bump and is good all the way to the top of Stob Ban, its last few metres becoming steep and loose, the clouds were covering the higher mountains, Stob Ban was clear so, once on the summit we did get a few hints of the bigger things around us but none were clear of cloud which was a pity. 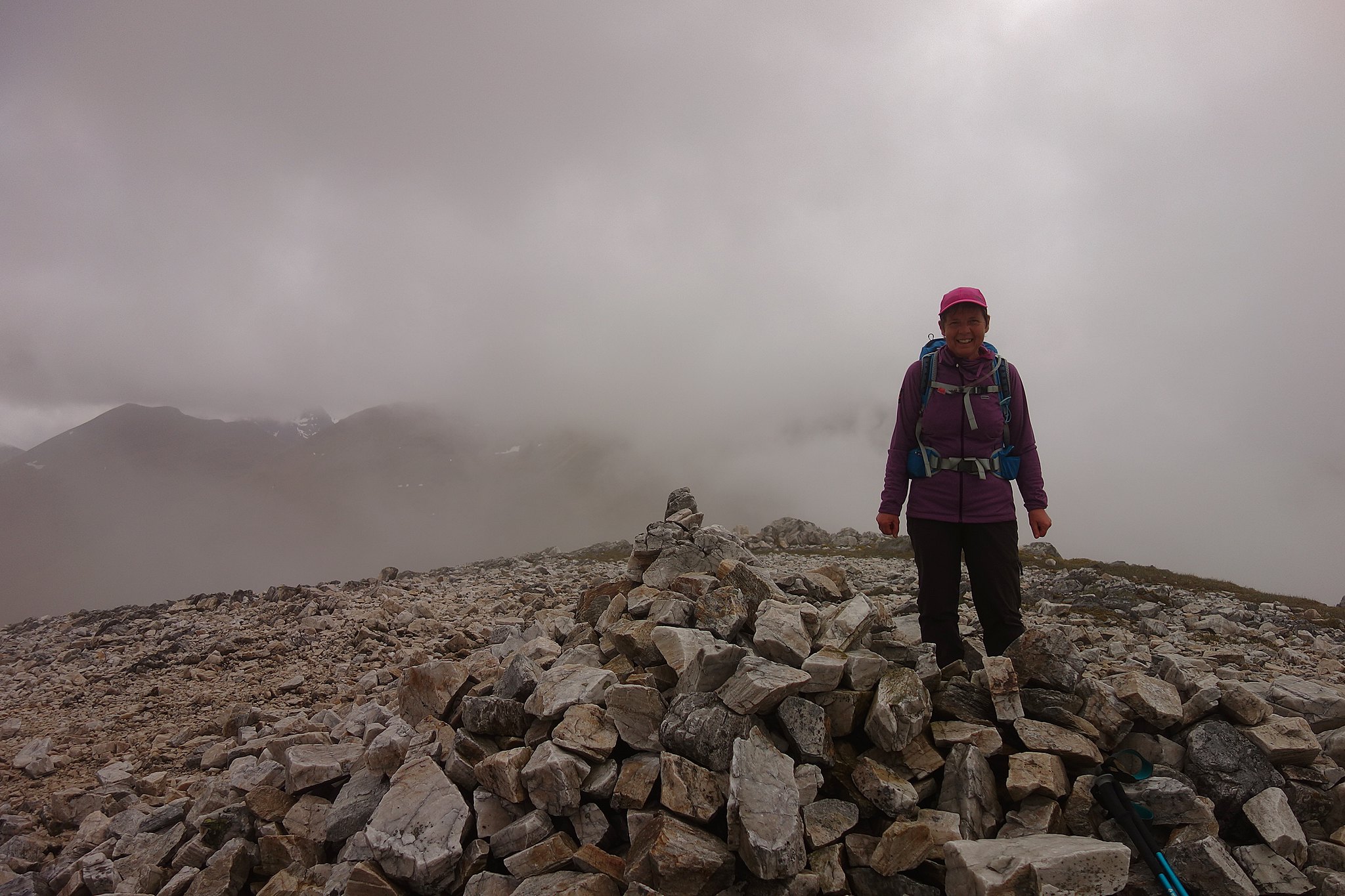 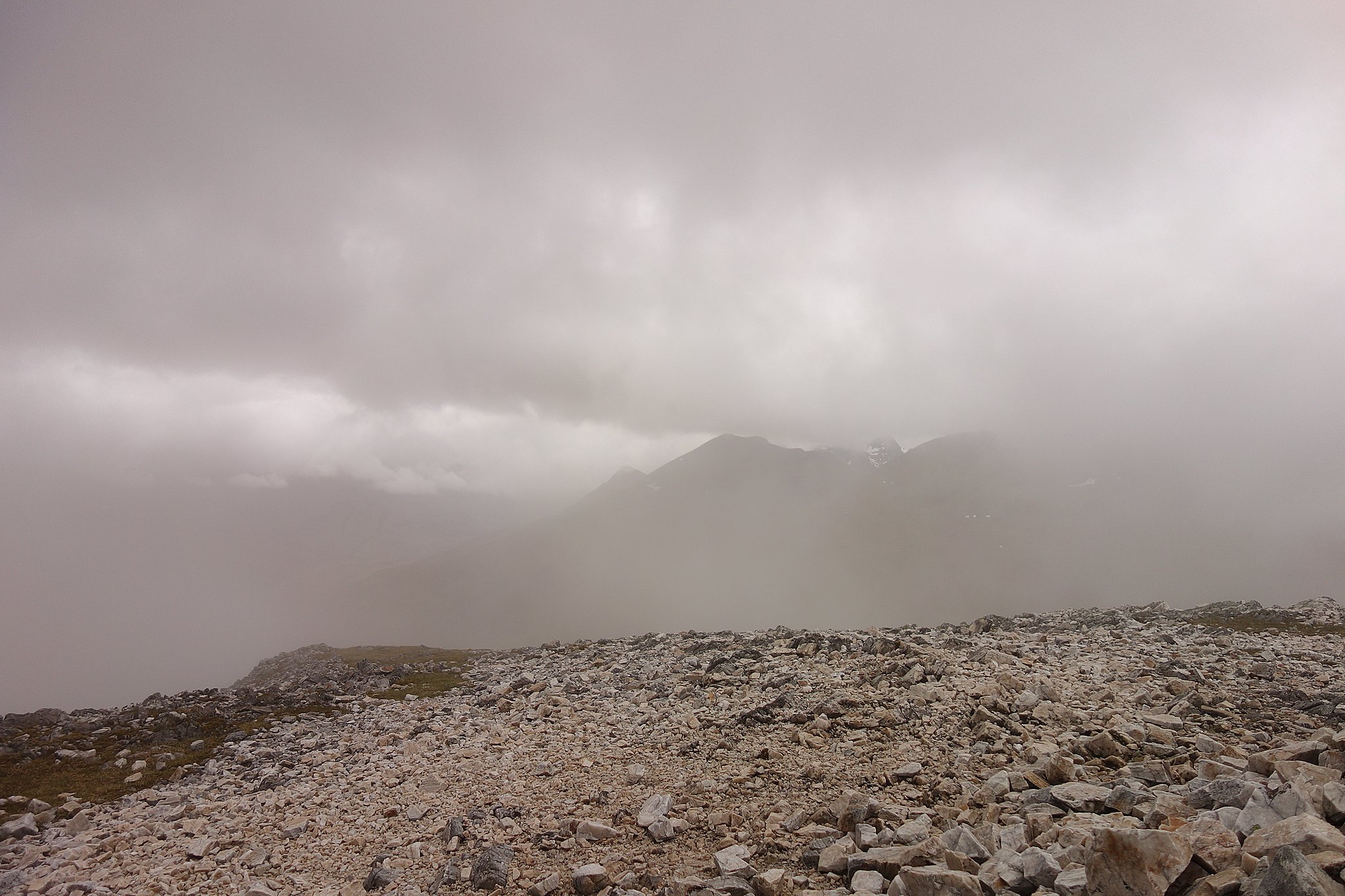 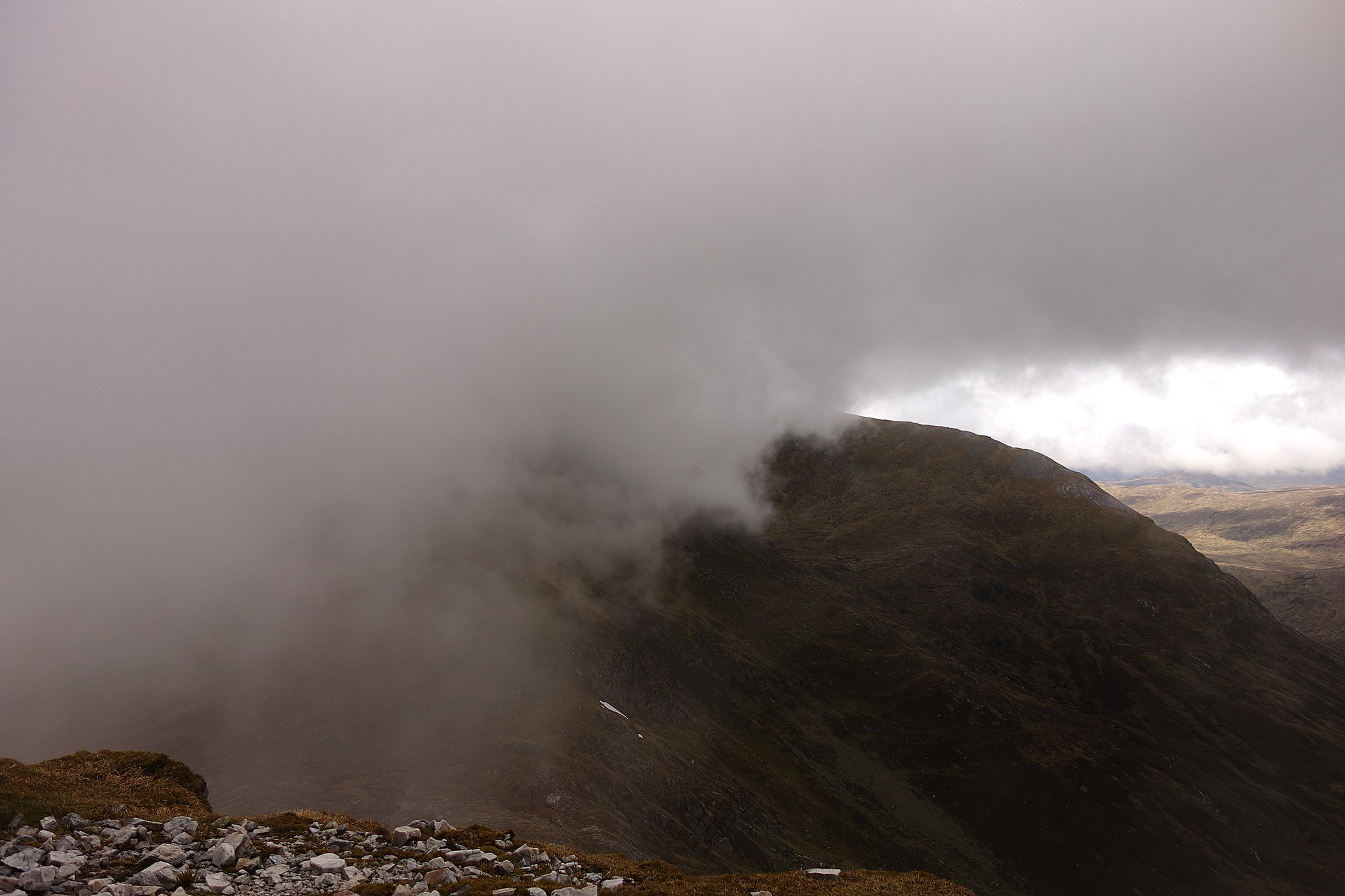 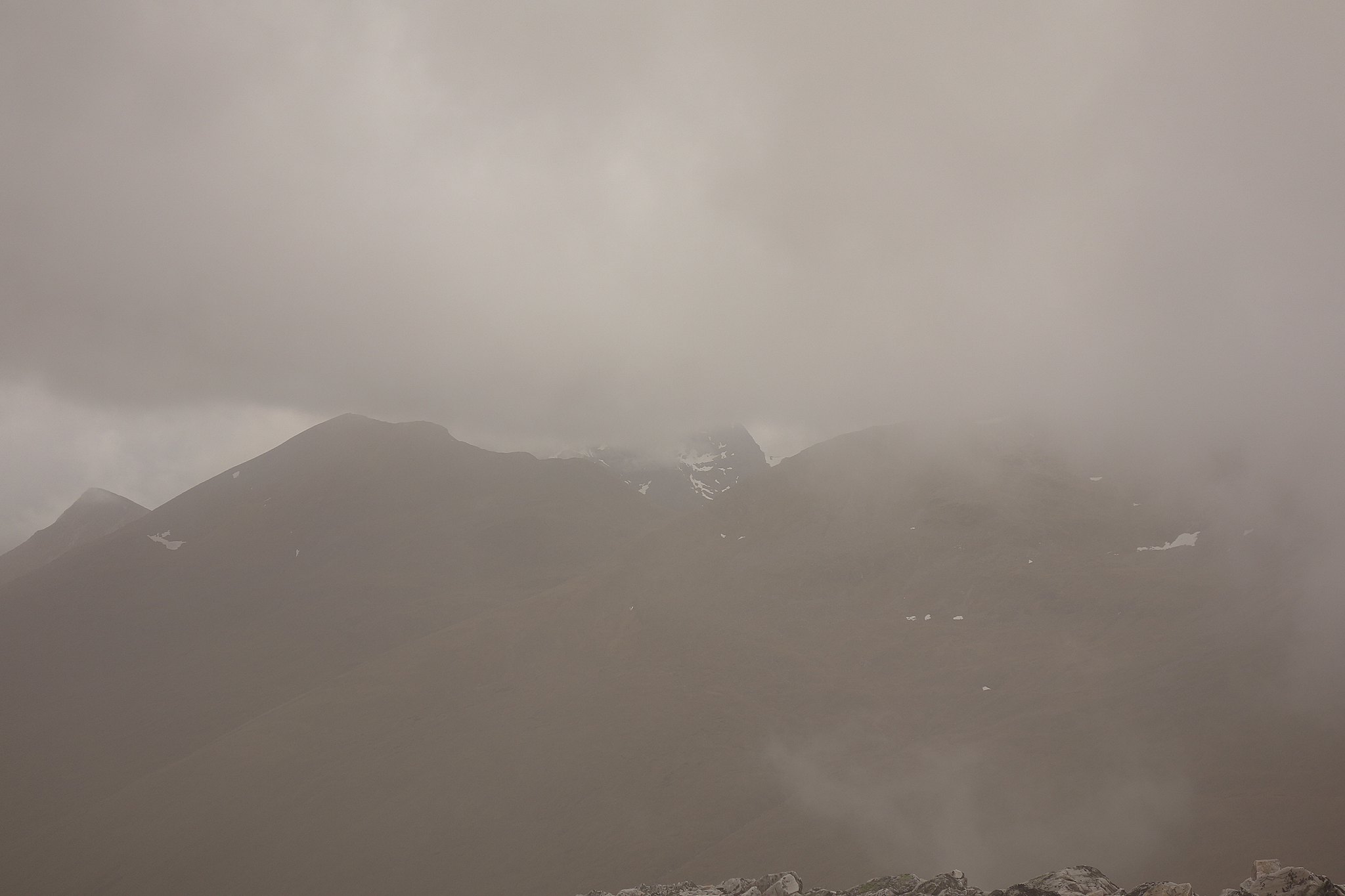 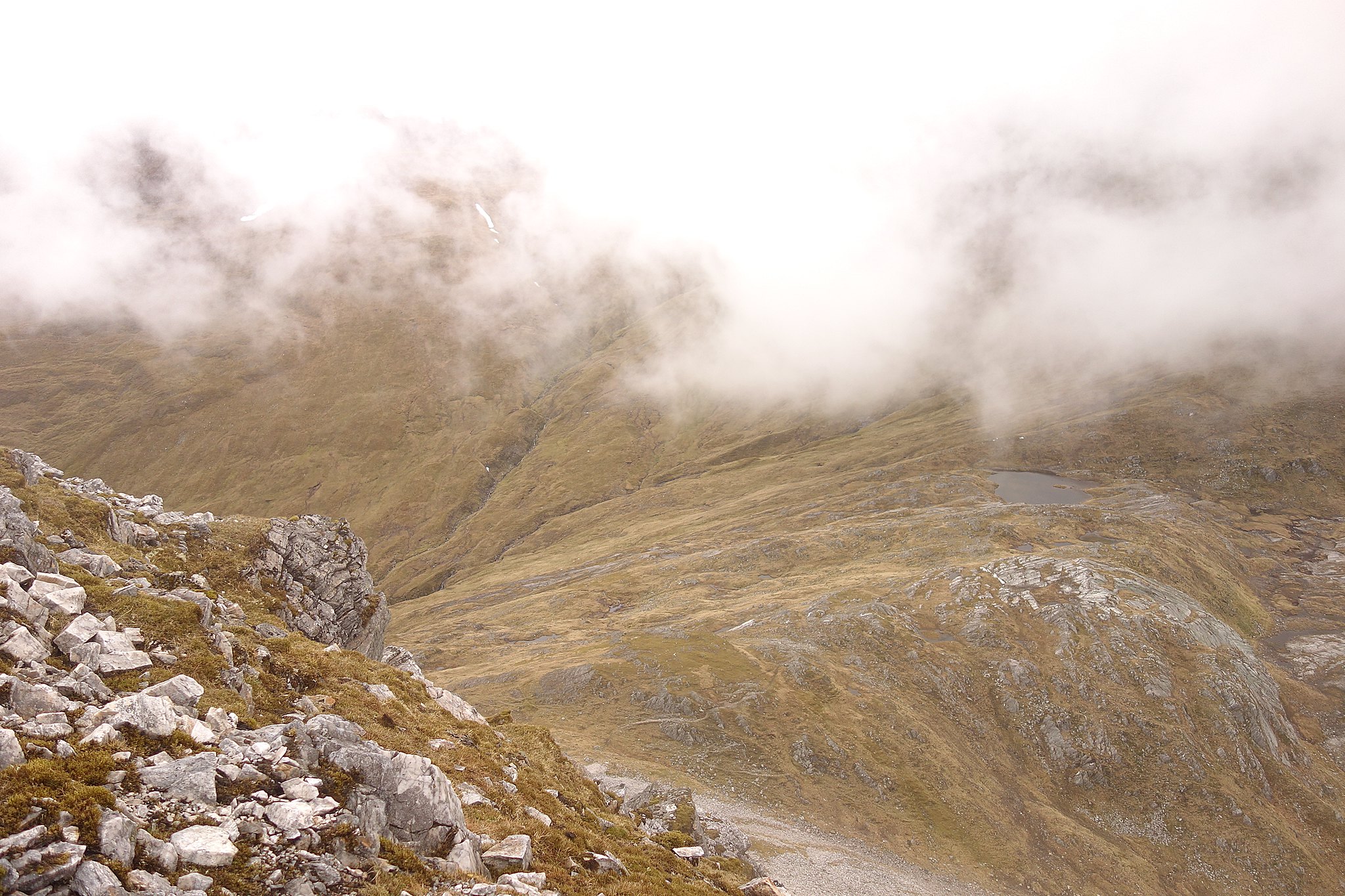 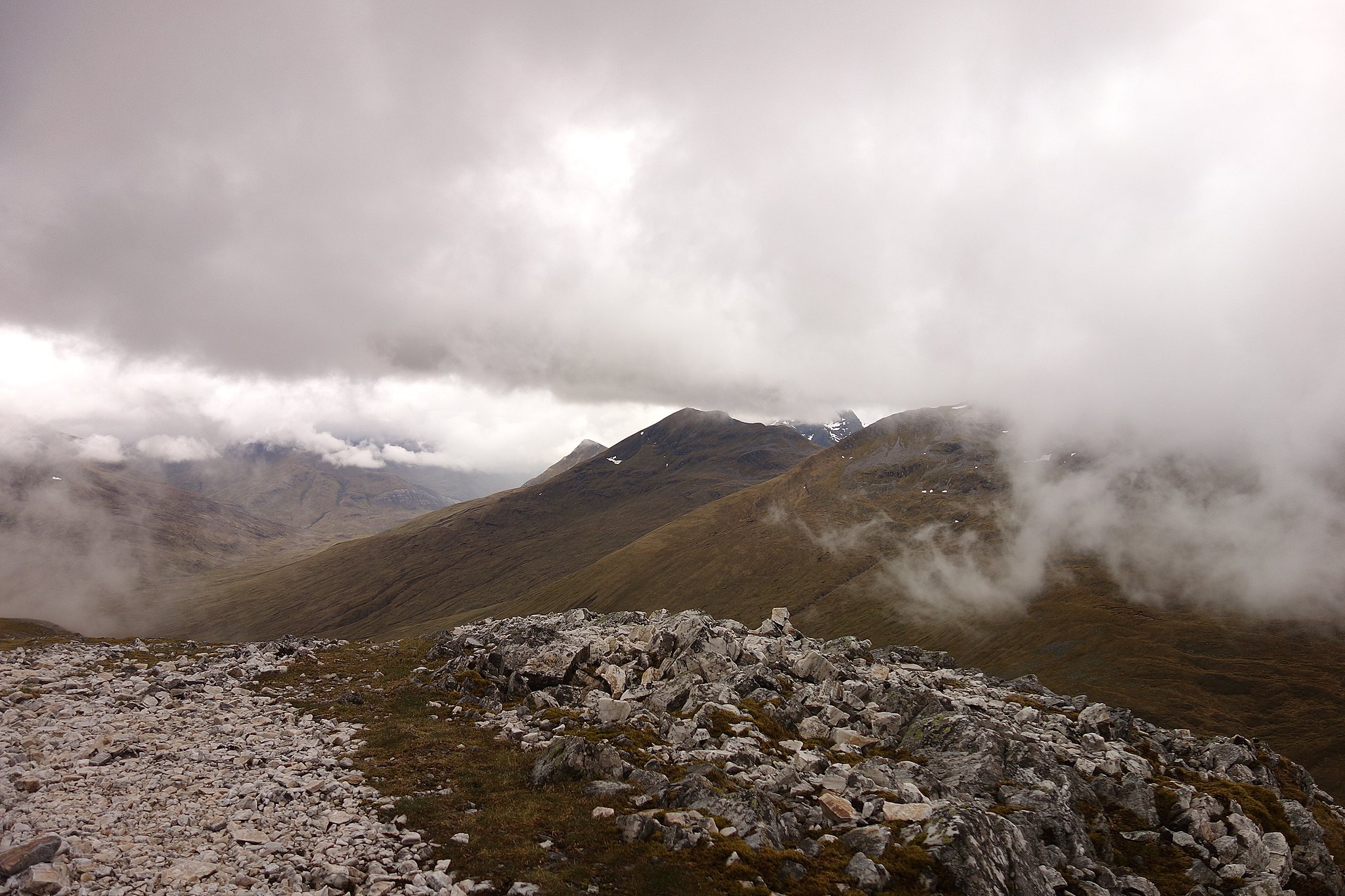 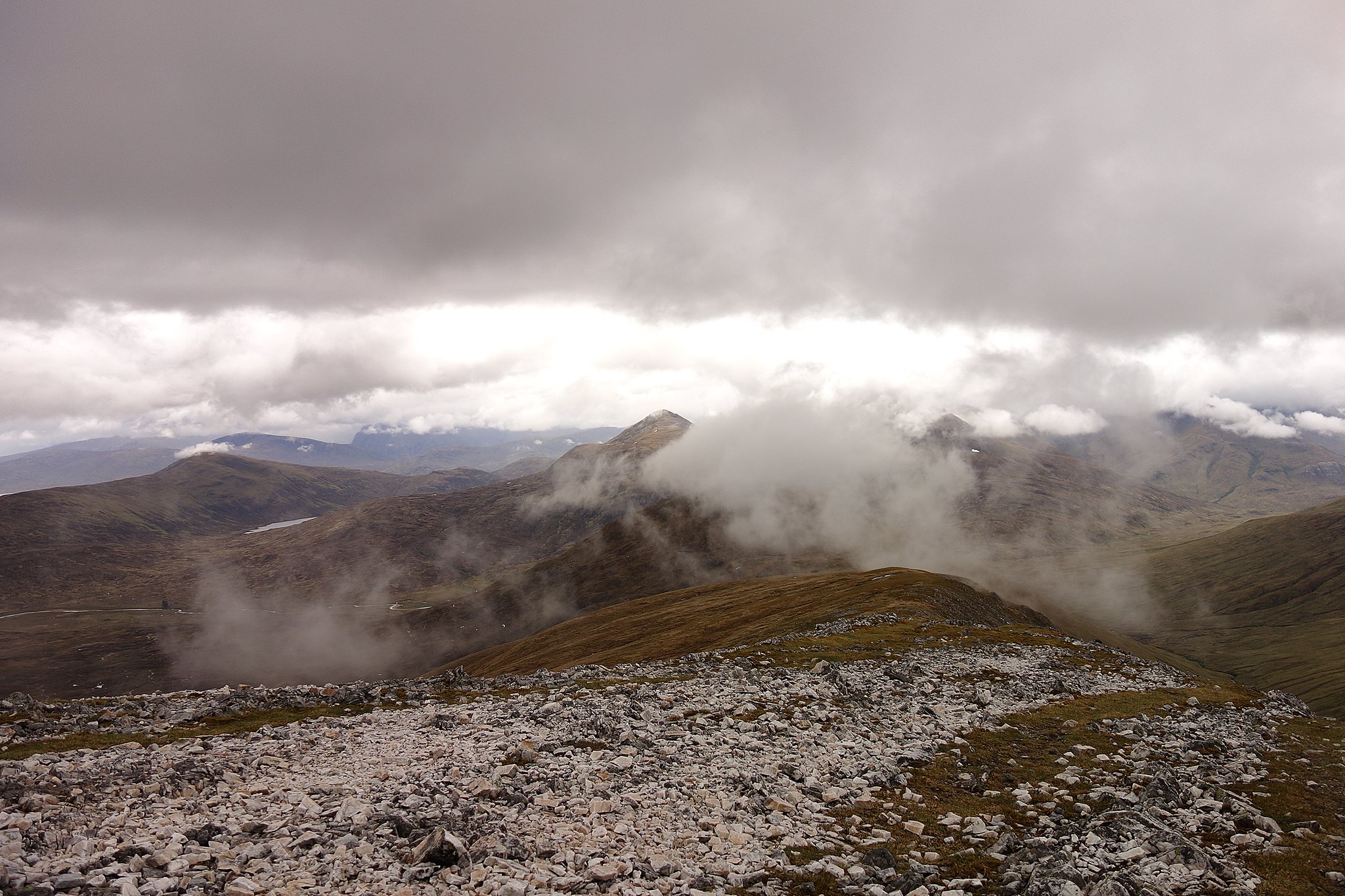 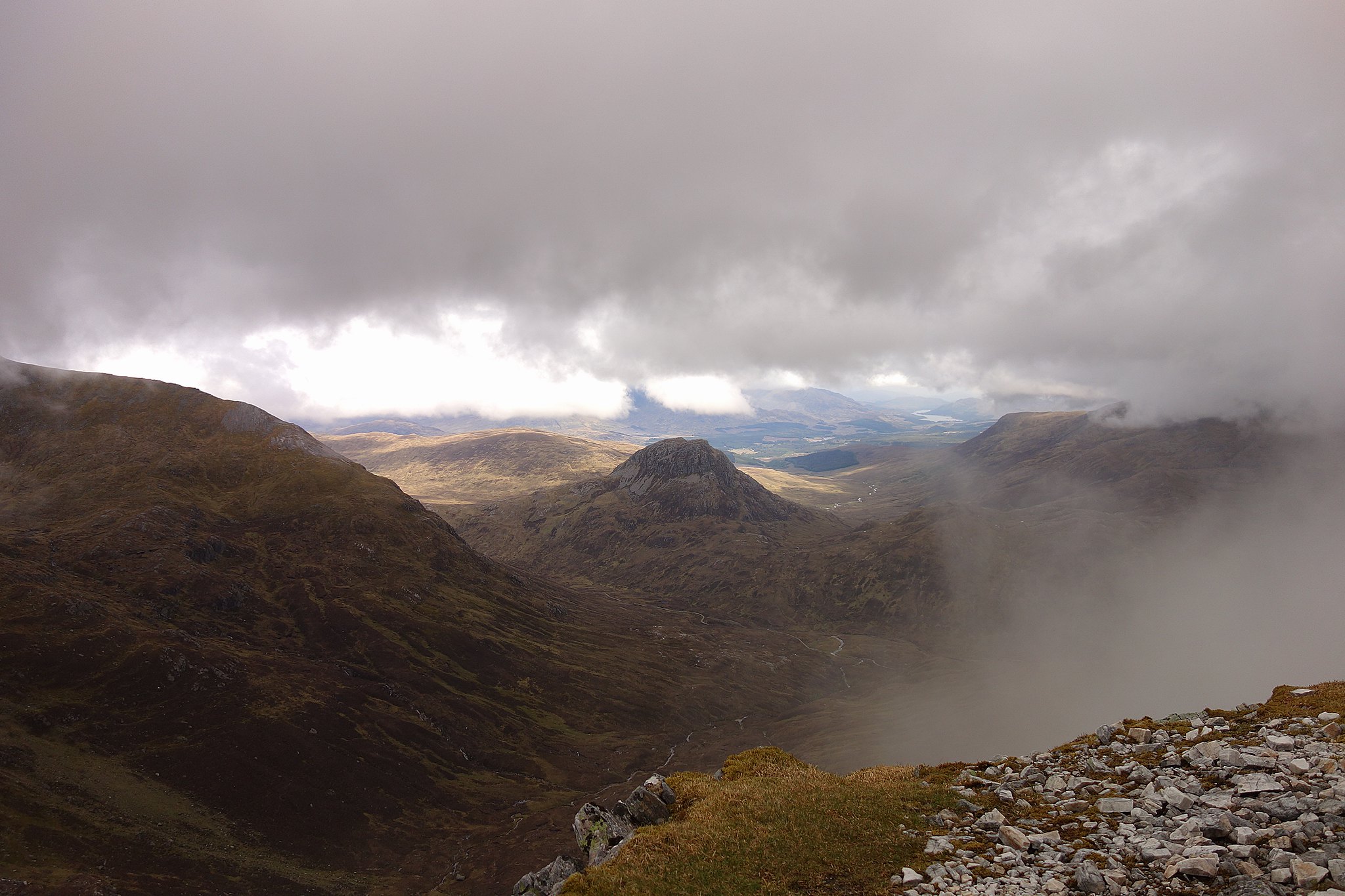 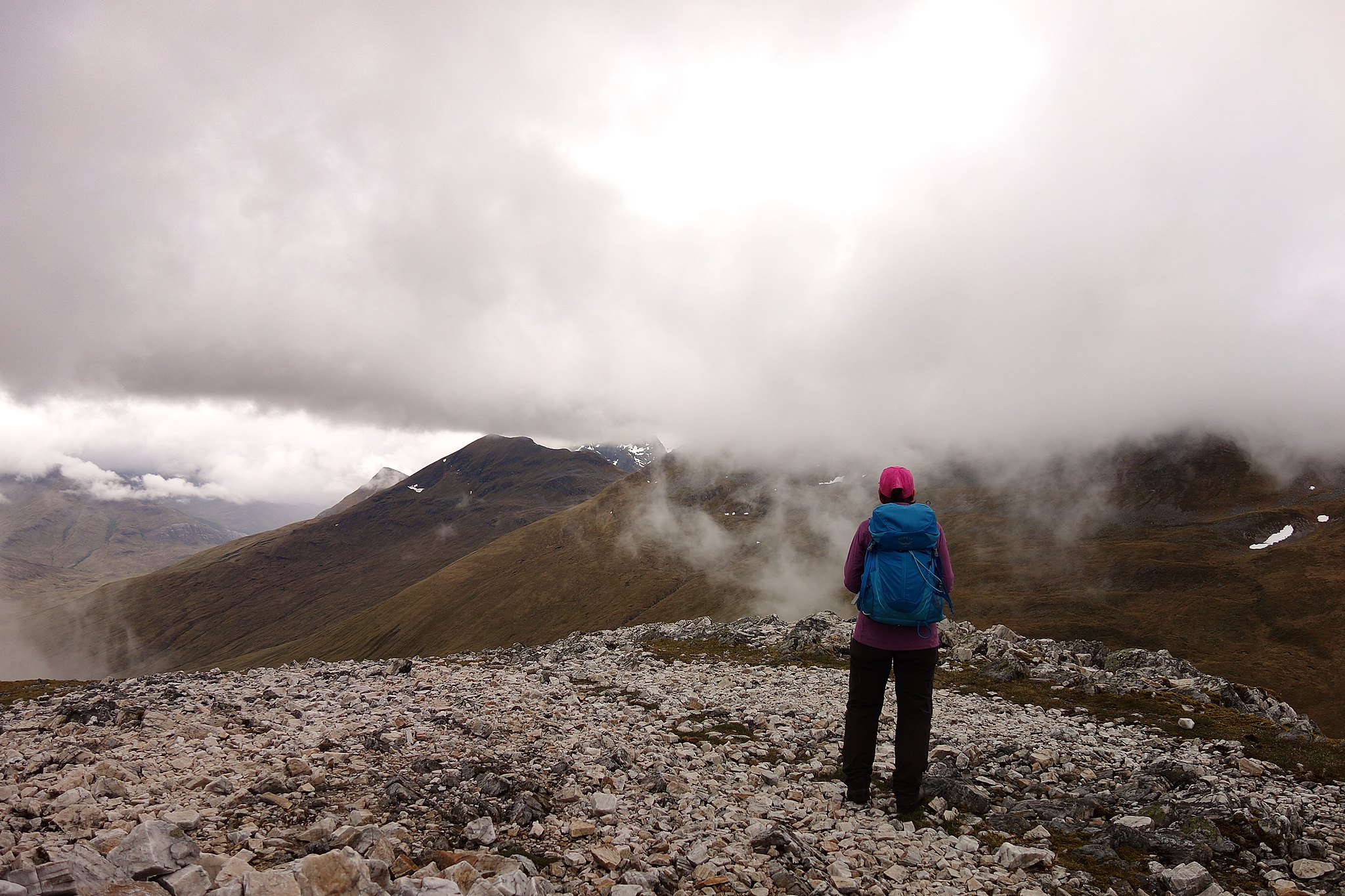 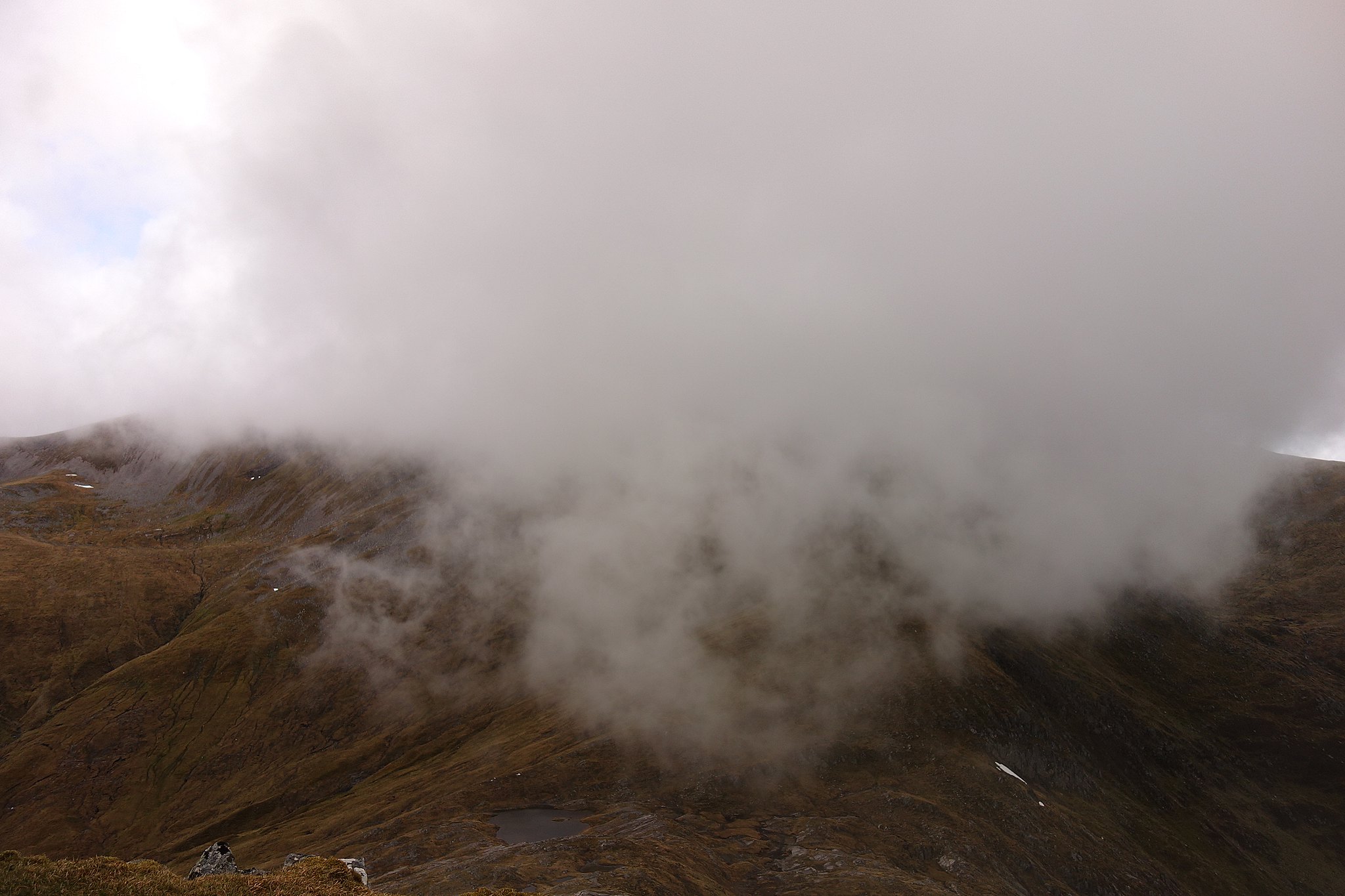 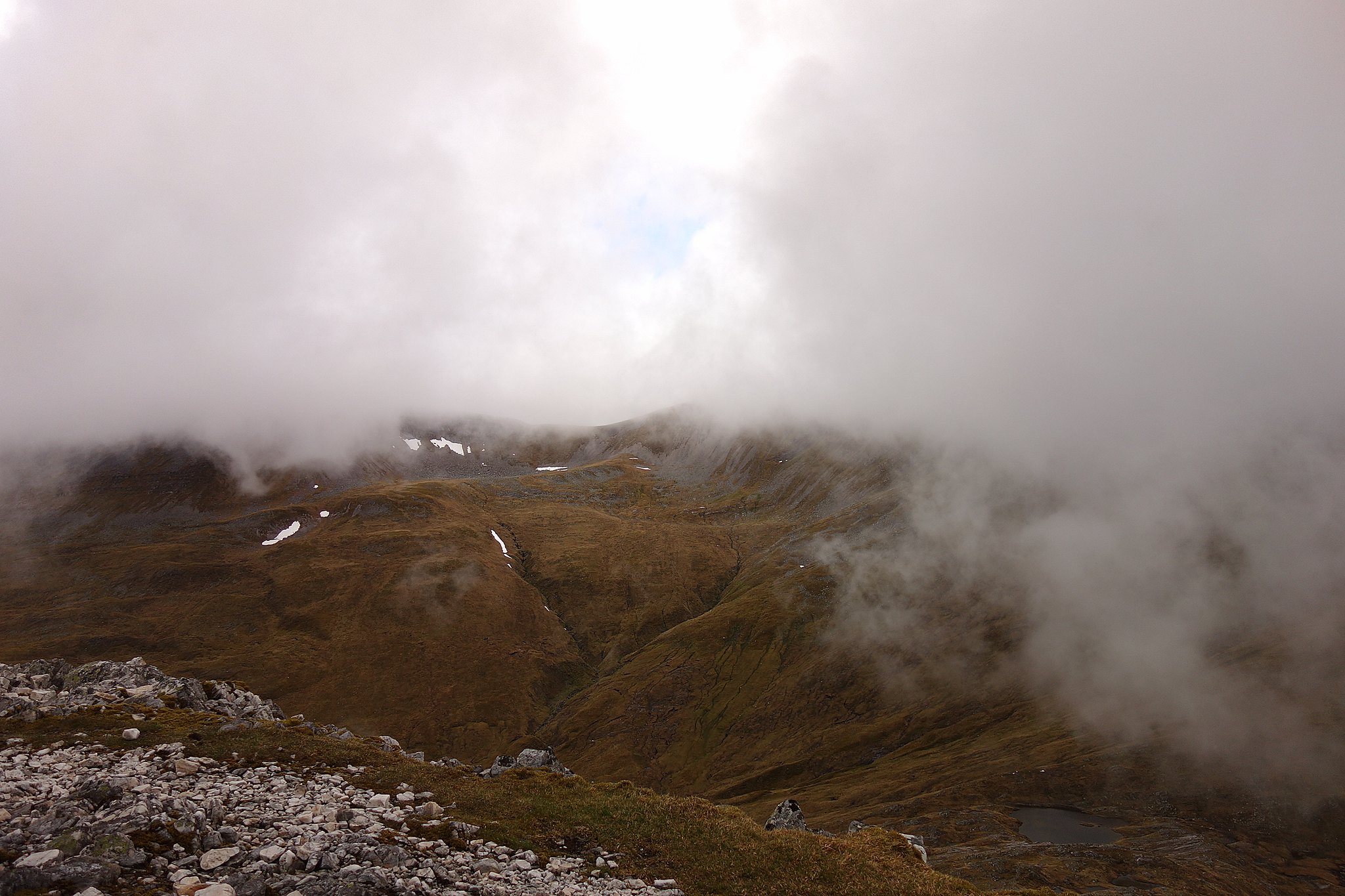 We had our lunch on the top waiting to see if the cloud would clear enough for some decent shots of our surroundings, but no, the cloud was stubborn and didn't shift, so we decided to set off down the way we'd come. 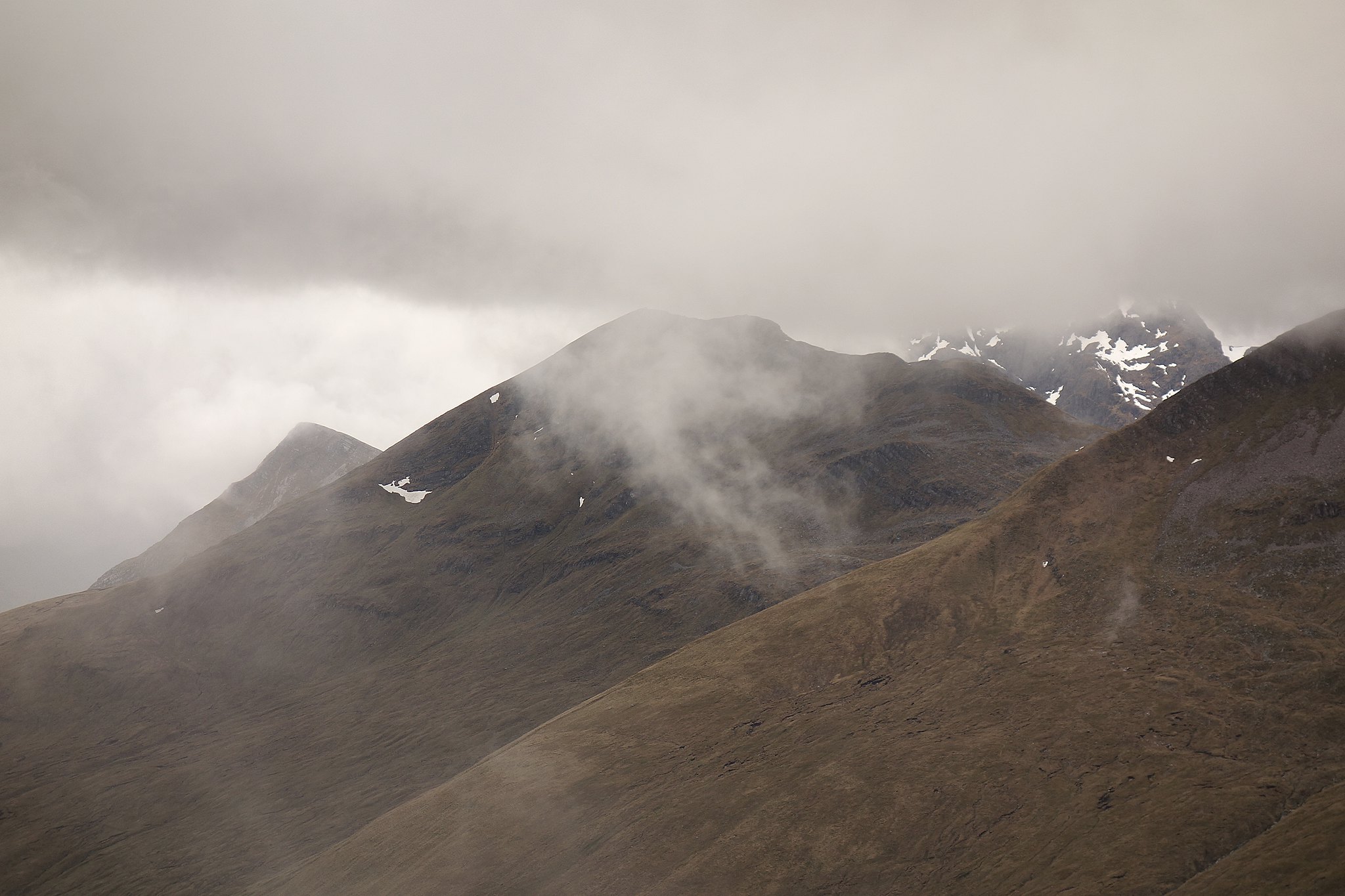 Lower down I could see the path we were on earlier zig zagging its way to the bealach between Stob Ban and Stob Choire Claurigh so my senior moment would have got us to the top just not the planned way. 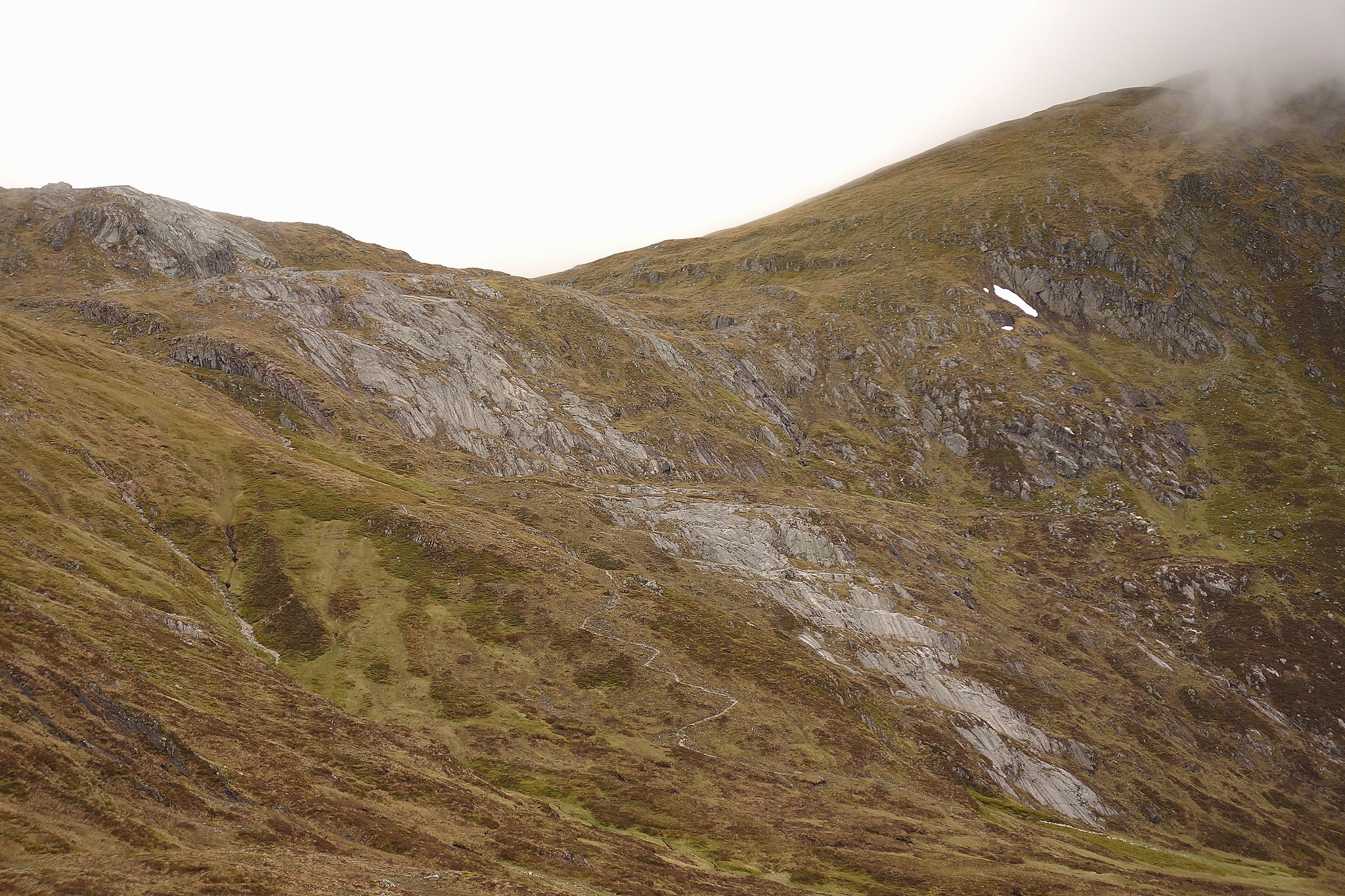 .We could make out the bothy 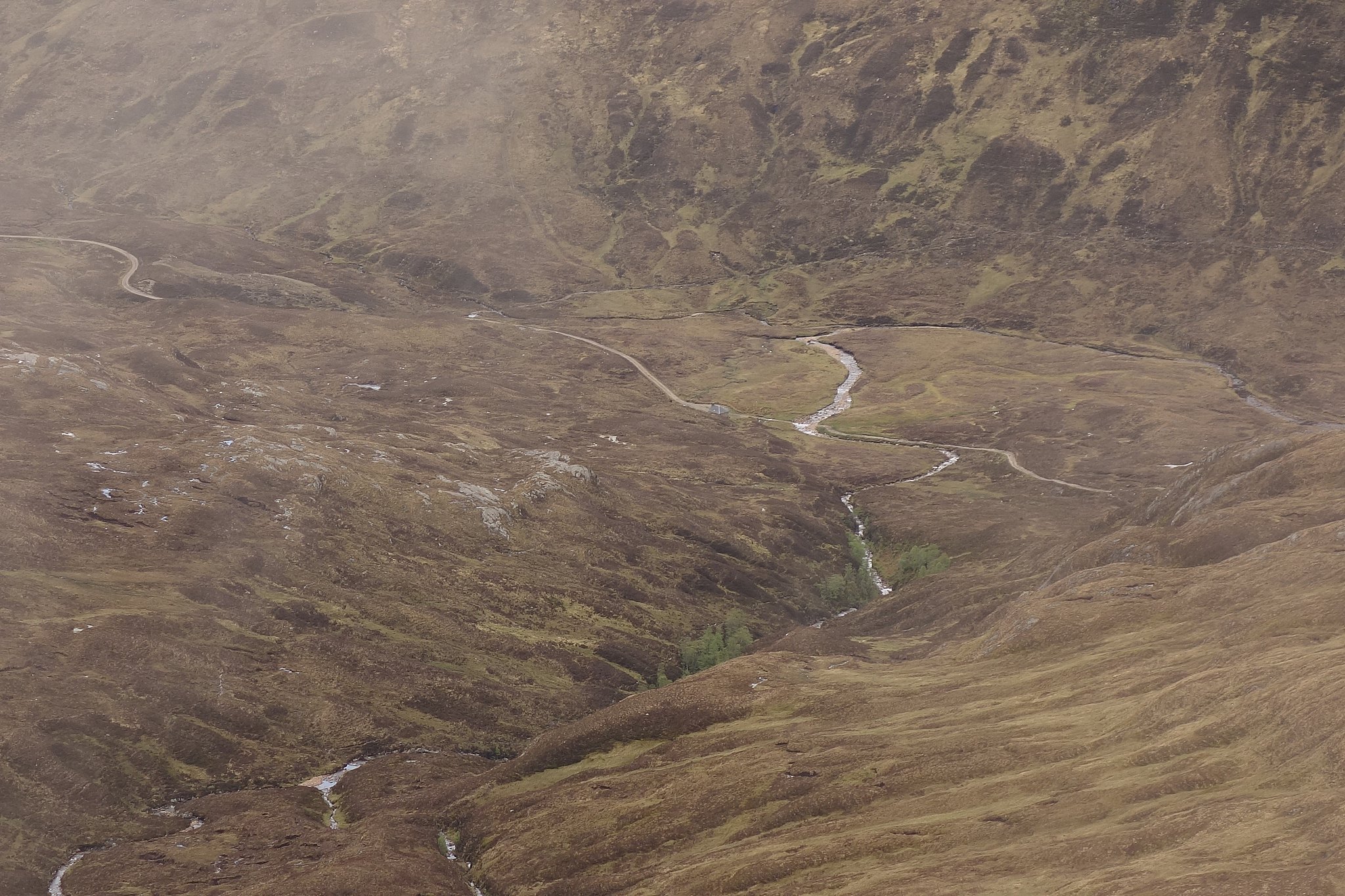 .
When we got to the bothy again I was surprised to see that we'd only taken three hours (including senior moment

) to get up and down, if it wasn't for the walk to and from the bothy this would be a short day out, I can see why people include Stob Ban to make it a four munro day, we'd like to come back and do that one day but it'll have to be a good one so we can see the mountains around us

Back at the bothy we sat down and had an extended re-fuel stop, we had a look inside the bothy, I reckon this one can get snug and atmospheric on a wild winters night, we've never been in the position to need one but, one day, we'll have a bothy night, maybe when we get to do the Fisherfields 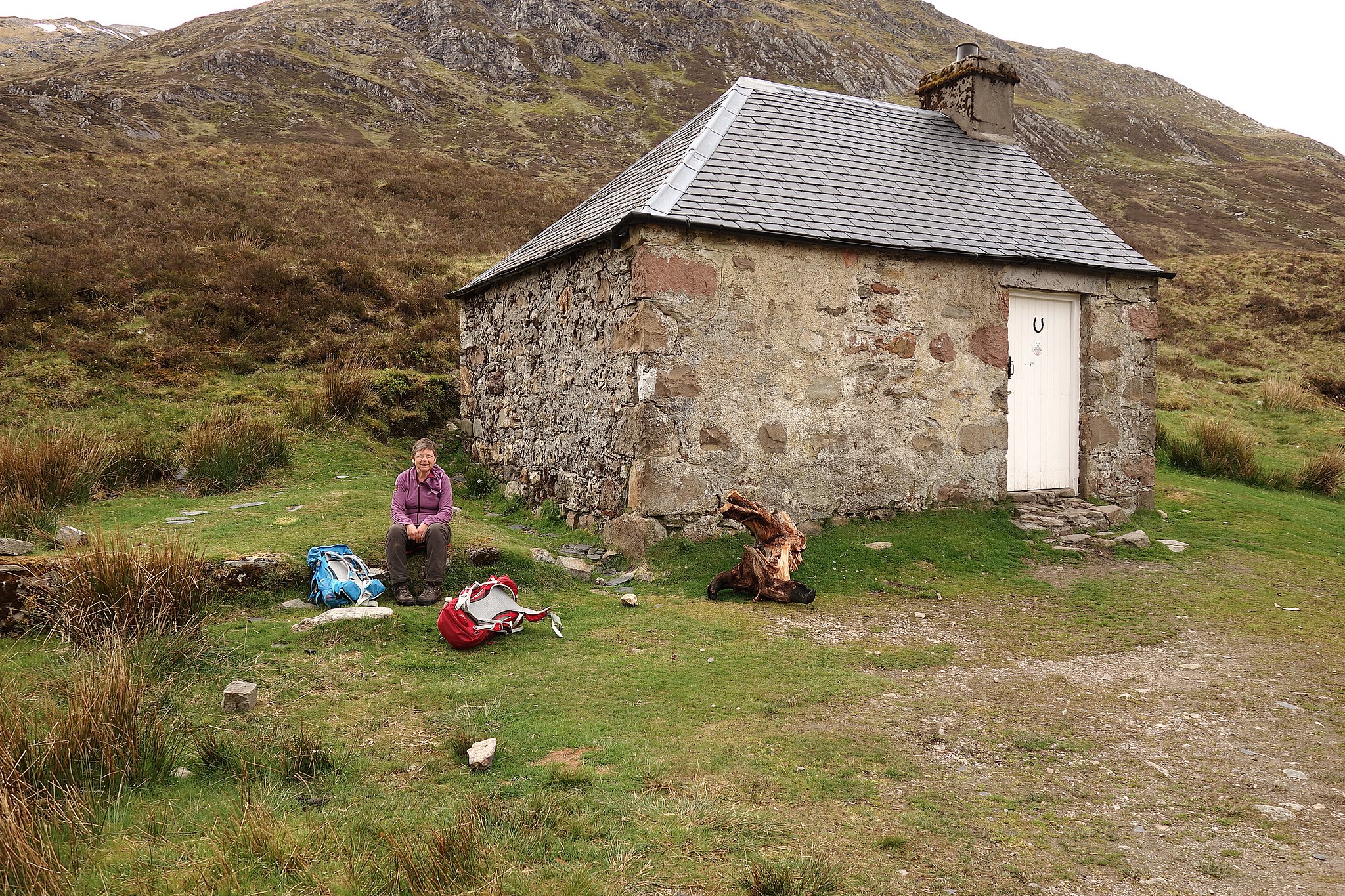 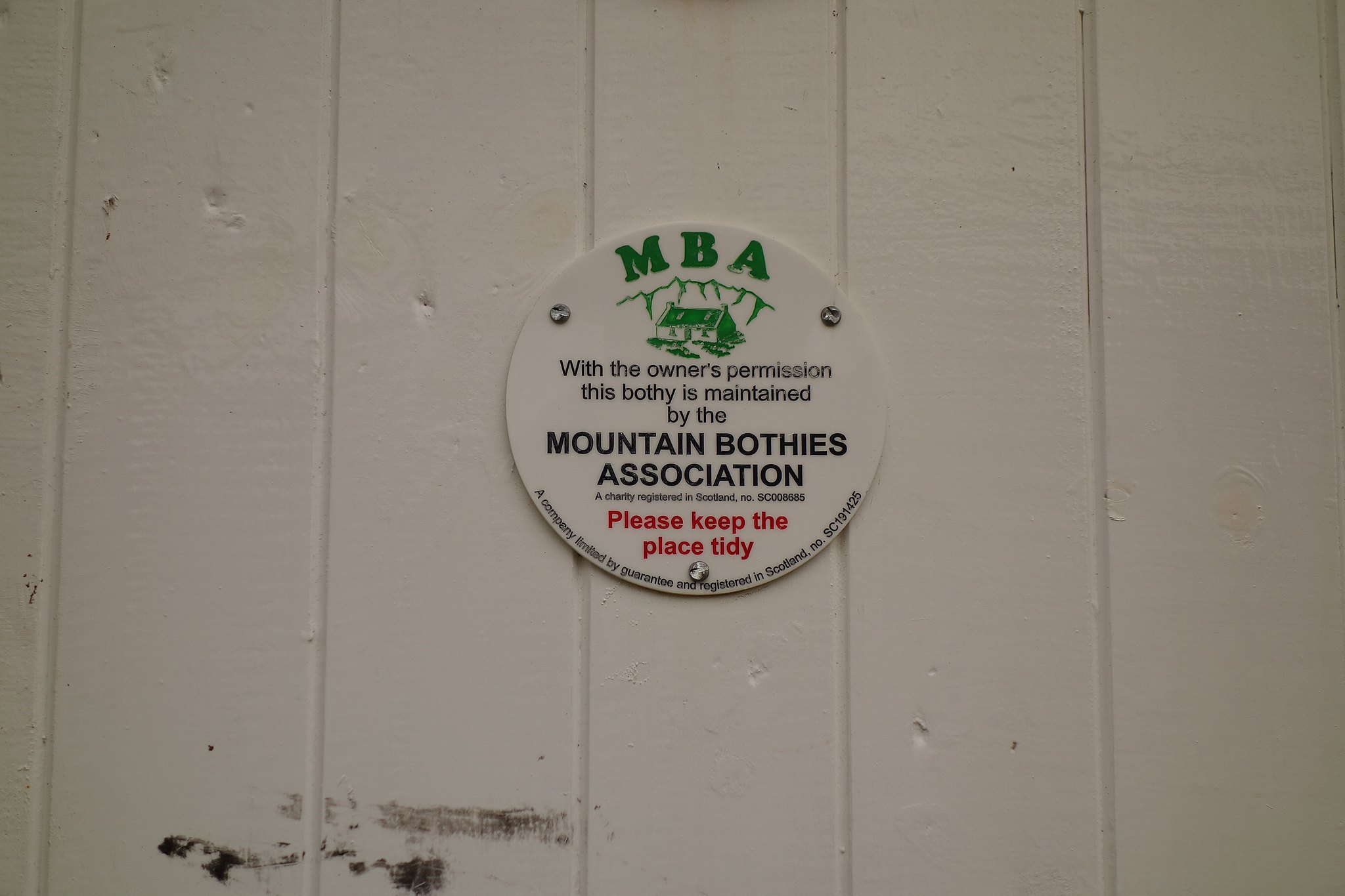 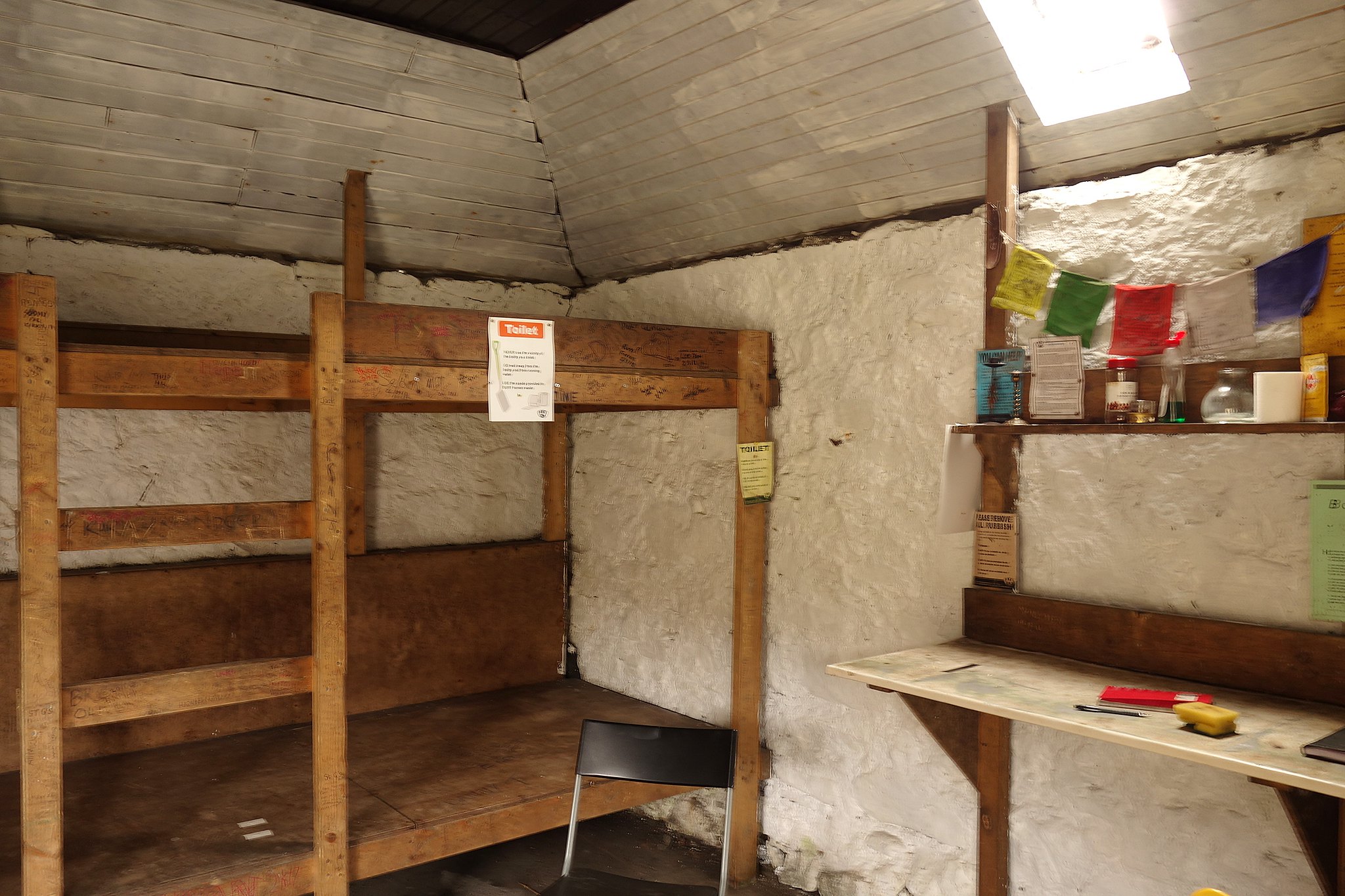 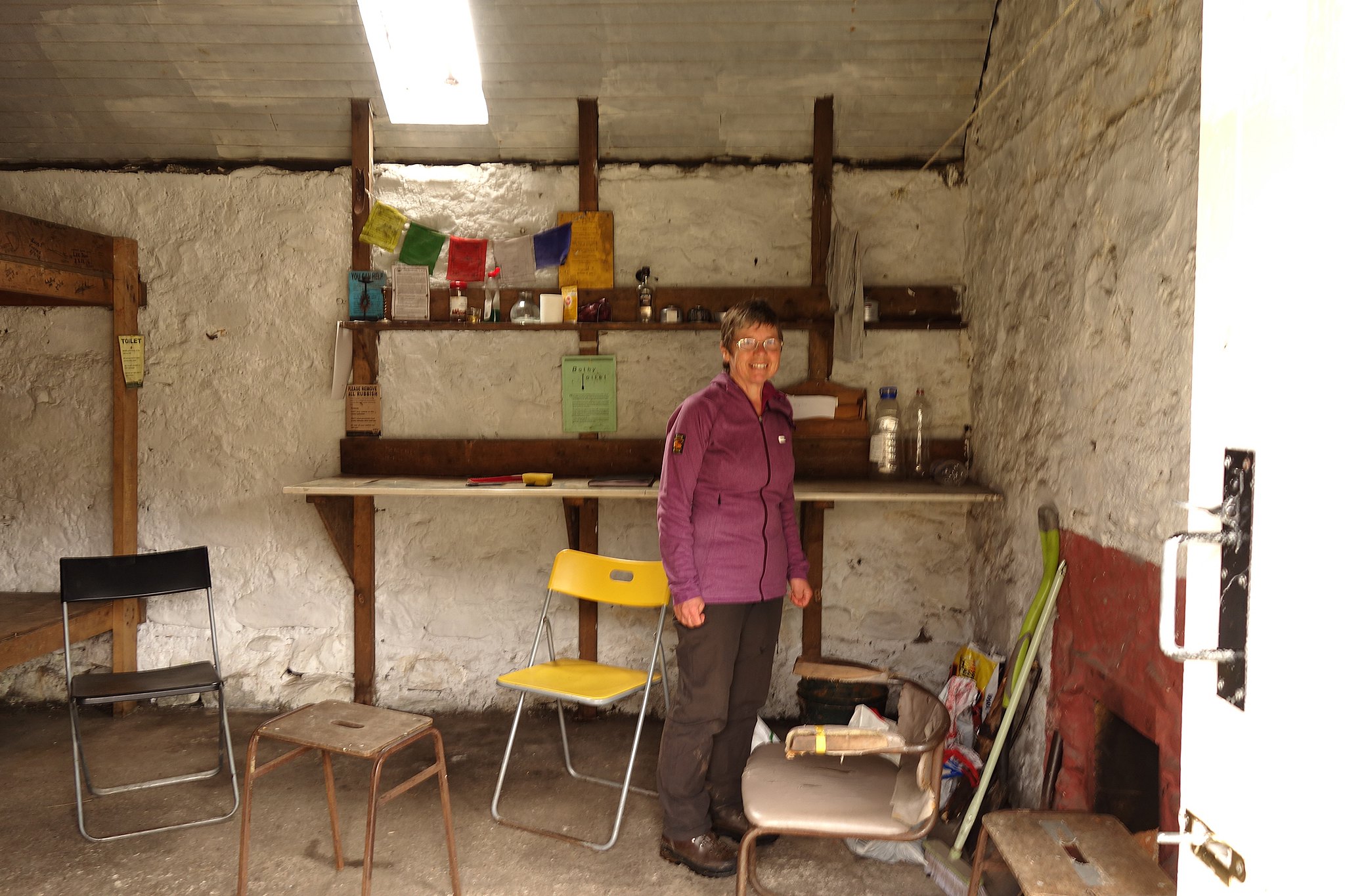 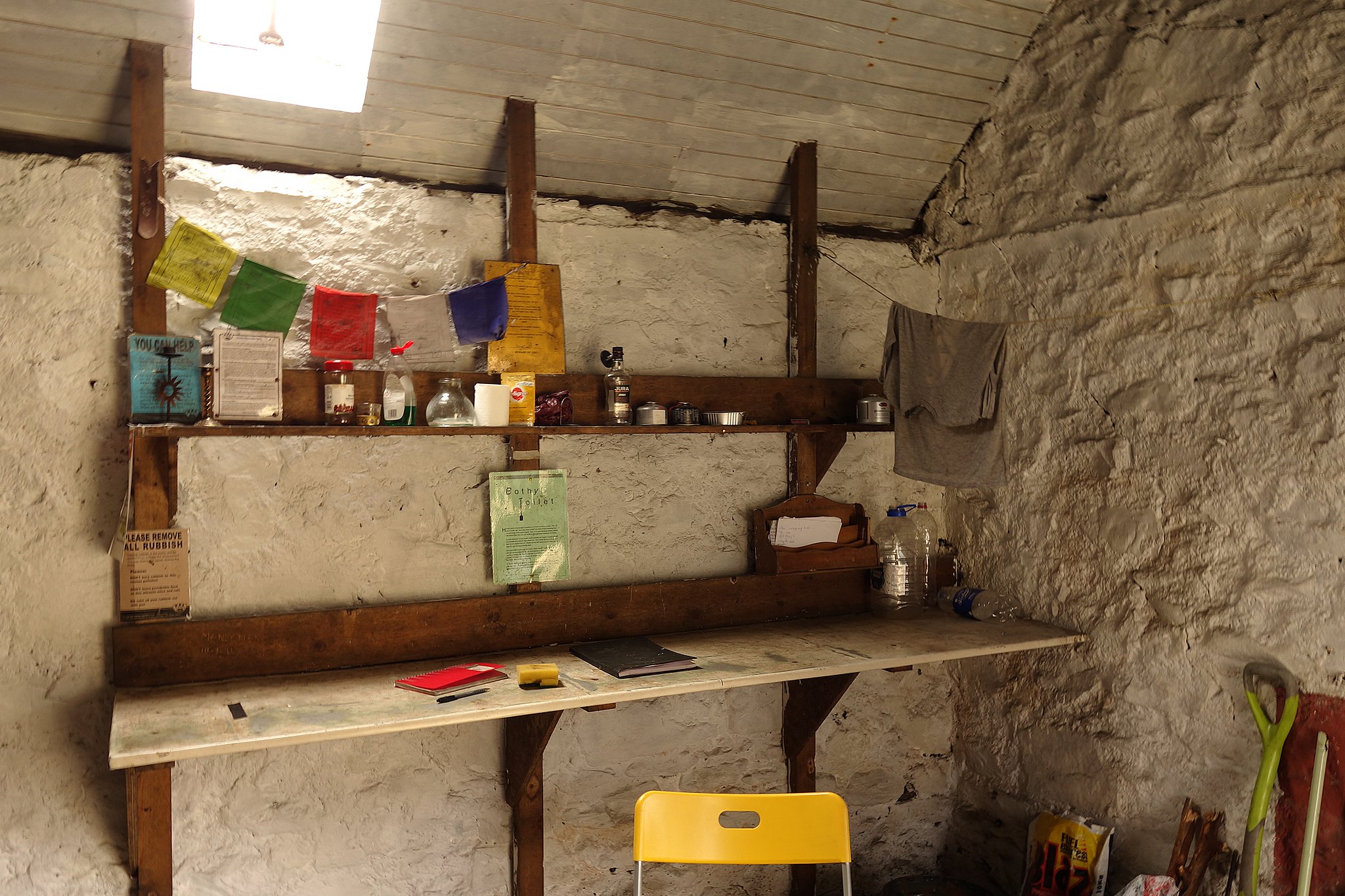 We set off on the long walk out.

On Sgurr Innce we could see two small white specs on the crags, they looked like sheep from a distance so it was the subject of conversation for a while, how had they got there? will they get back again? will they fall? as we got further on we noticed they hadn't moved, why? poor things, they must be stuck, it wasn't until we'd got back and downloaded the photo's that we realised the "sheep" were Quartzite deposits in the rocks 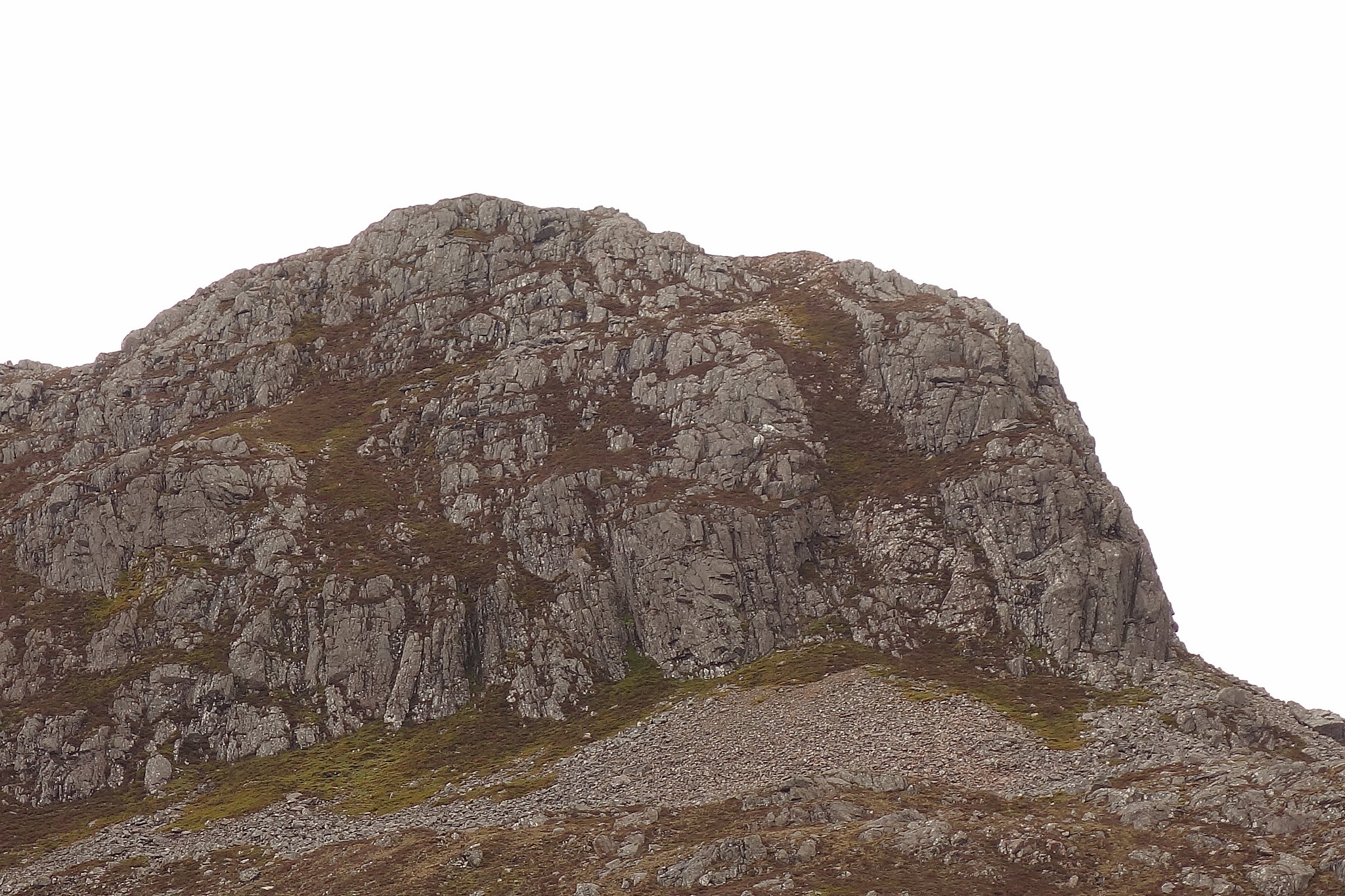 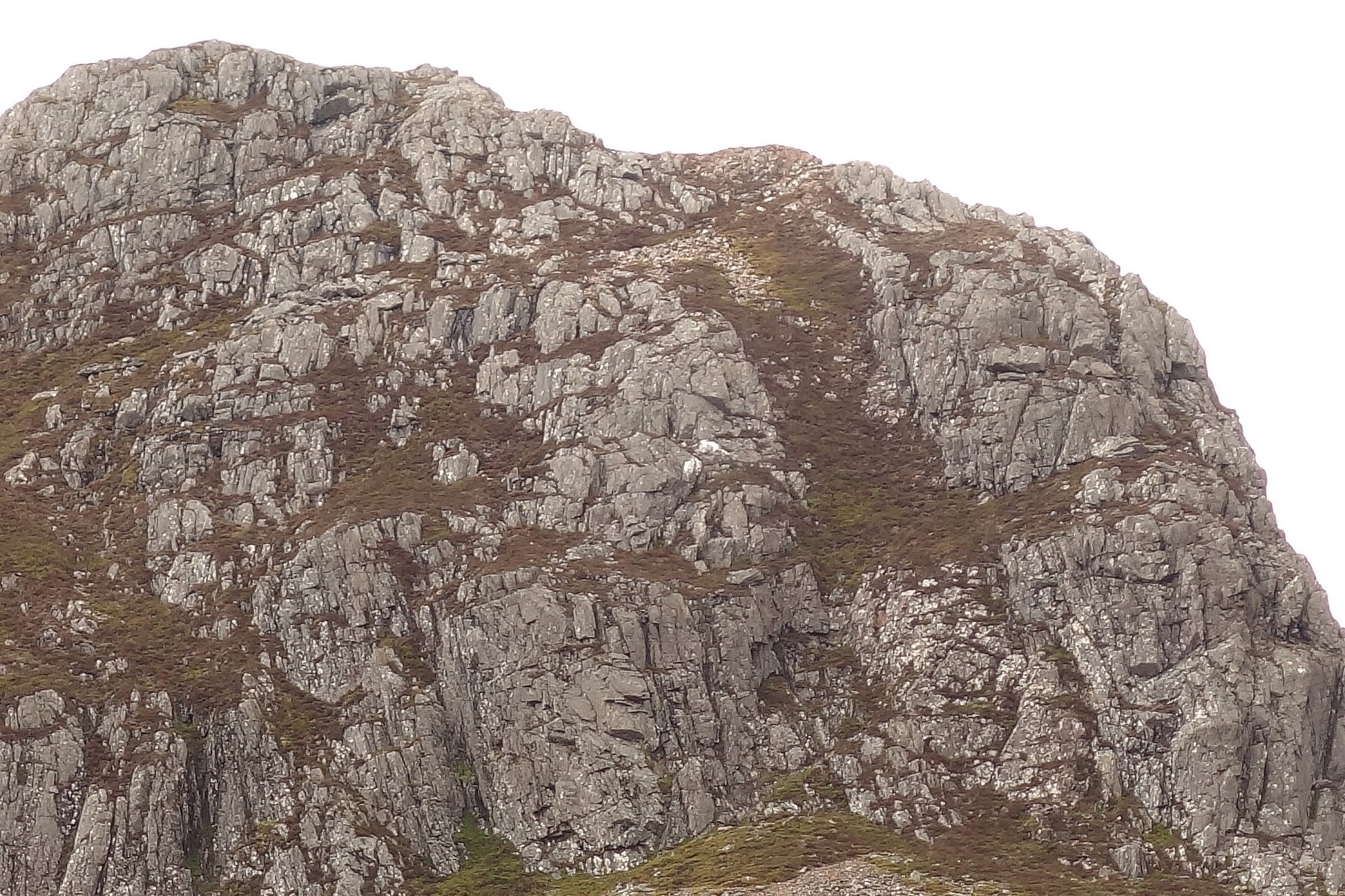 We visited the minister again to thank him for keeping us dry and arrived back at the car exactly 6 hrs after leaving it. 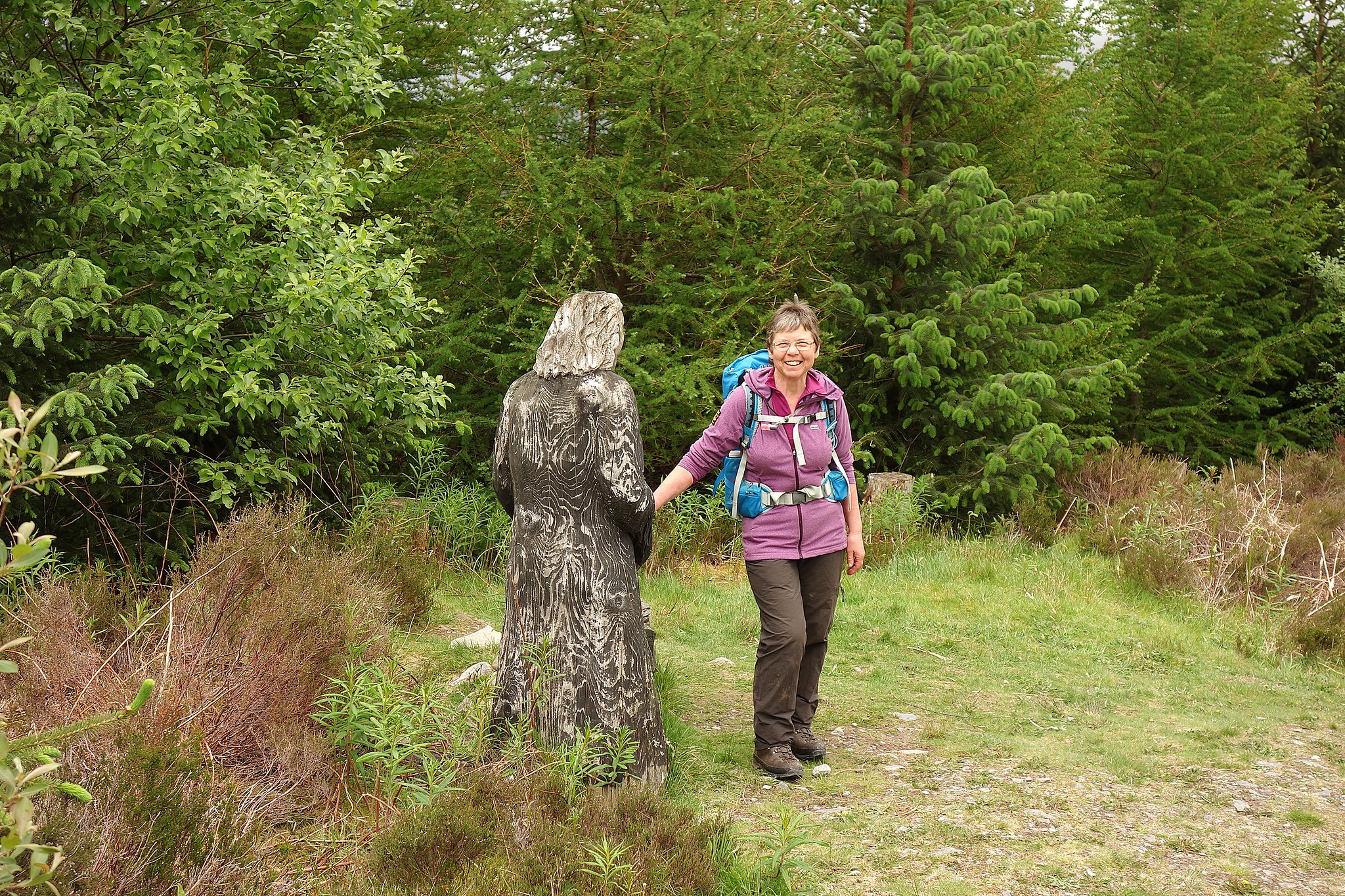 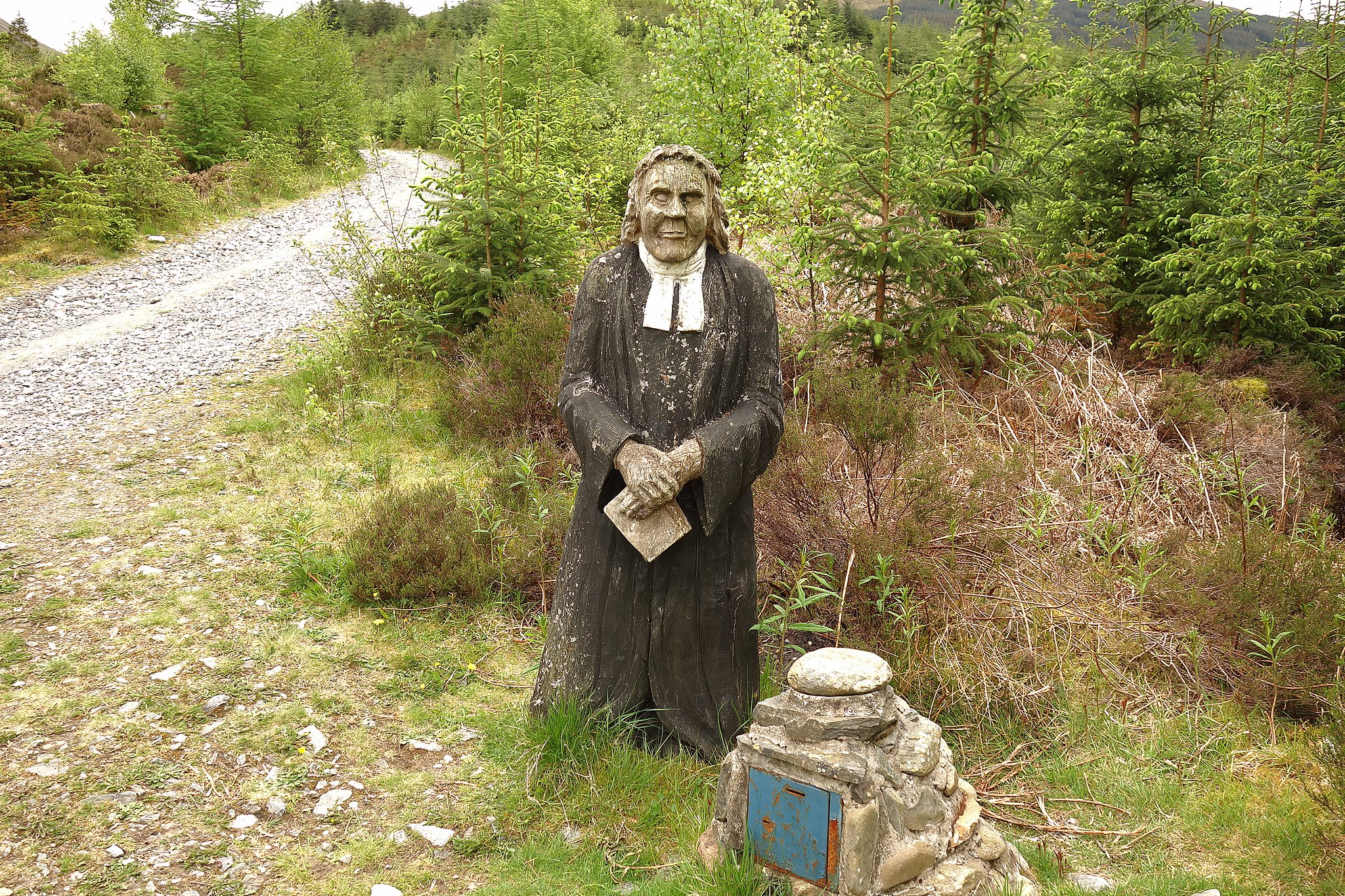 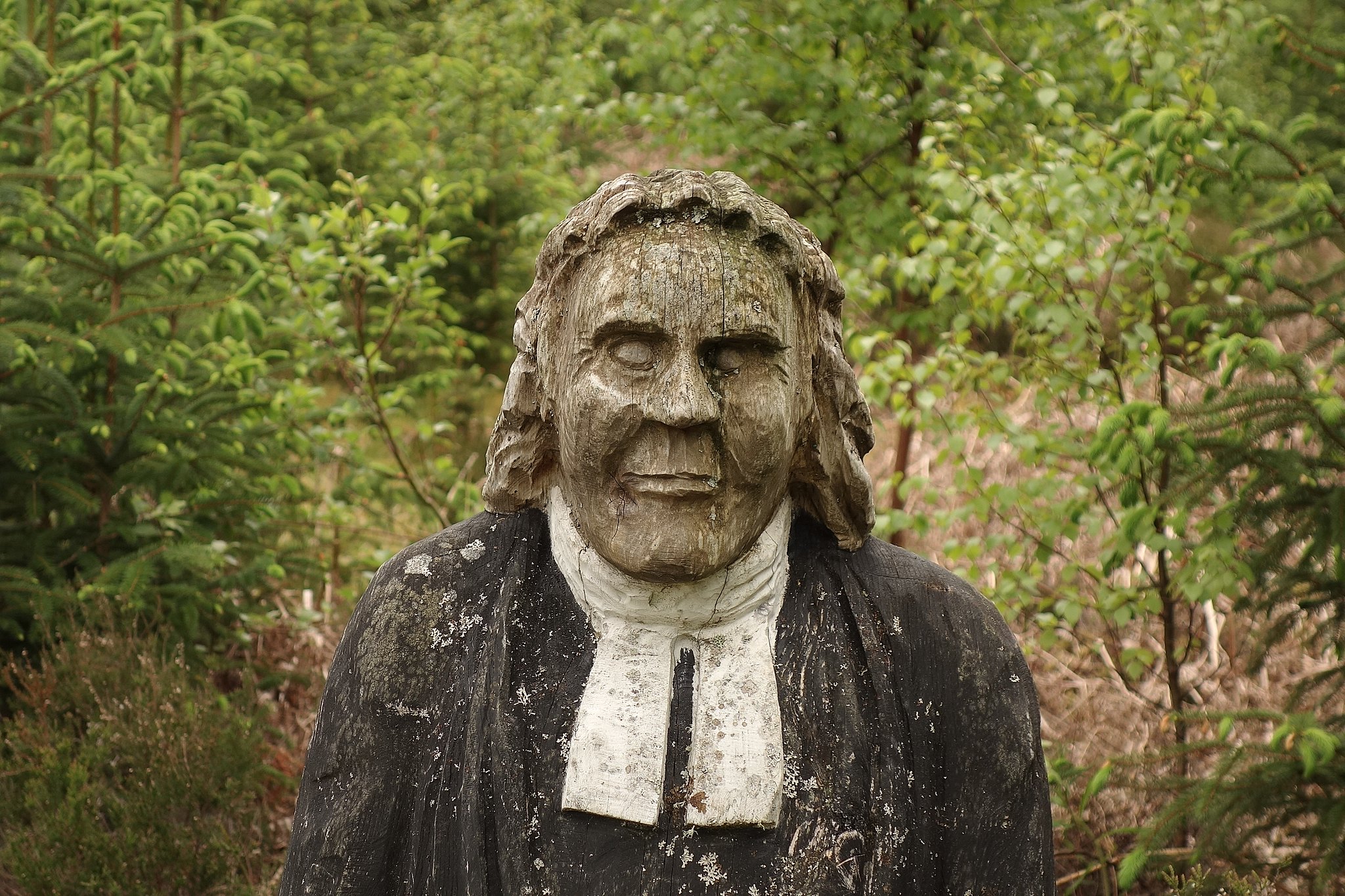 This was a very enjoyable day out and now we've got all the Grey Corries ticked off, we'll come back to do 'em again, on a warm and clear summers day, We really want to see them in all their glory