Breezy Day with The Brothers!

Breezy Day with The Brothers!


Woke at Ratagan, with the wind whistling in the window. Sounded ominous for prospects of doing The Brothers today. Was windy enough yesterday, on Beinn Fhada. Forecasts were showing gusts upwards of 50 mph plus. Errrmh, what to do? Looked pretty much the same most ranges, near or, far. Would be a shame to go home after an idle day. Thought it might be worth trying the ridge, from East to West, thus keeping the wind at my tail. The main worry would be Sgurr a Bhealaich Dheirg? Anyway, decided to go for it and give it a try. Drove to the car park, which is often the start point and awaited the bus. While twiddling my thumbs, thought why not use them to try get a lift to the Cluanie Inn, which would be my start. Hardly took a minute till I got a lift off a few lads. Was bright and breezy, as I struck out from the constructor's caravans, working at the Inn, soon to open, hopefully. Enjoyed a pint, or two here before Looking back down to the Cluanie Inn. Impossible to imagine the strength of the wind.

Wasn't long till the wind was soon whipping at my clothes, even at this low altitude, sometimes knocking me off course, having to angle into the wind, to protect myself. Thought about retreating several times, on the way up to Sgurr an Fhuarail. Quite steep slopes off to left, I thought

For a wee while, the wind abated a little and the sun came out. Seeing the first Munro, Aonach Meadhoin, I was encouraged to keep going, especially as it would notch up 200 for me! Onwards! Looking forward to ridge over to Aonach Meadhoin, from Sgurr an Fhuarail. Quite tiring ups and downs, but finally made it to the top. Hurray!

Looking westwards, Sgurr a'Bhealaich Dheirg didn't seem too far off. Nothing too technical on way over. Wind still strong, but perhaps less than 40mph, I thought. Looked at the ridge out to the finely made cairn and thought it looked well within my reach, as things stood. Enjoyed the wee scramble, out to the finely constructed cairn. Look back to Aonach Meadhoin. Ahead to the Five Sisters, Saileag off to the left.

Bit of snow on the ridge, as I set off for Saileag, but again, nothing to worry about as visibility was fine. Didn't seem to take too long to get round there, enjoying views toward the Five Sisters, SGR and over to Beinn Fhada, scene of yesterday's blow -dry Pano to the west. Saileag, along the ridge. Five Sisters, await for another day. 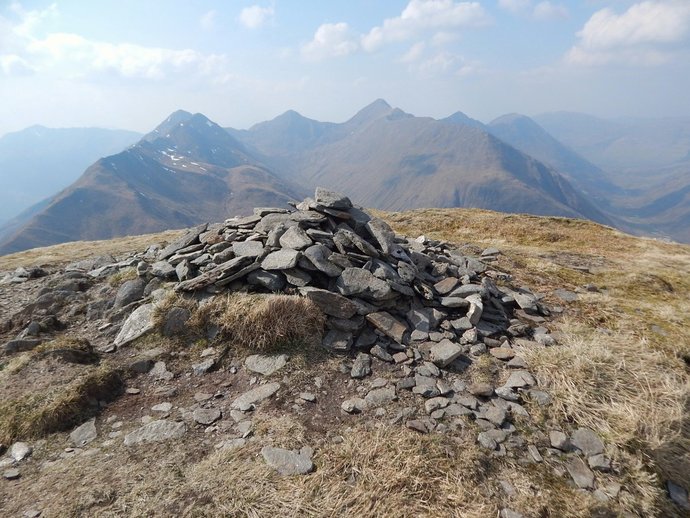 The grey hair, well parted by the wind :)

It doesn't take too long descending from here, though it sure is steep from the bealach. In fact, I do recall a wee trip onto the bum

The path is badly eroded here and there, so I meandered back and forth which eased the strain on the thighs somewhat. Also, a bit boggy lower down. I thought, am pretty glad I did the route east to west, not only because of the wind, too! Looking down on western end/start point. Steep whichever way one is going and plenty boggy from tree line down.

Back to the car after five and a quarter hours. wind must have been pushing me on right enough. Wish it could help with the drive home, too A sort of symmetry :) Re: Breezy Day with The Brothers!

SO that is what these hills look like! Thanks posting the photos, myself and friends were up there on Saturday and couldn't see a thing, took a right soaking as well. I think you must have wrong day on walk report

Re: Breezy Day with The Brothers!

audreywaugh wrote:SO that is what these hills look like! Thanks posting the photos, myself and friends were up there on Saturday and couldn't see a thing, took a right soaking as well. I think you must have wrong day on walk report

Awww, sorry to hear you had such a lousy day, Audrey. Mine was almost written off by the wind, but at least vis wasn't too bad ...... and yes, you are correct, date I had put was one month out

The weather is so changeable - like my memory/computer skills