Jaywizz phoned on the Friday with a plan to climb Mellock Hill the next day. This is another Ochil neither of us had visited before. It's 'only' a 477m Tump, all of 20m lower than Innerdouny Hill 1.5km to the NW. Some pre-walk research found reports on it mentioning some extra challenges not on the OS map; new forestry covering most of its northern and western slopes and surrounded by fences. This led to a close examination of the aerial view in Google Maps. Extensive ditching and planting was confirmed plus two parallel fences running most of the way round the north and east of the area. I promptly forgot about any approach from the west or south and decided the best route to the summit would be along the forestry track from Littlerig on the B934. We could then cross some felled forest, jump the South Quelch stream and follow the new forestry fences all the way to the summit which, fortunately, is outside the enclosure. What wasn't apparent was exactly where to leave the forestry track and how closely to follow the fences. That we were to discover from experience.

We started walking in overcast conditions with little wind, though both were to change later. As we walked along the track no obvious route down to and across the South Quench appeared. About 450m from the start the distance to the stream started to increase, but the ground had become worse. Two hundred metres later the route through the replanted area looked marginally better so we struggled over the humps, stumps, bumps and brashings down to the stream. Walking alongside the old dry stane dyke was easier, then we saw a faint path heading across the stream and up the far bank to the parallel forest fences. Between them we saw a narrow trampled path through the vegetation. Thanks to Jaywizz we had a length of pipe insulation with us to pretect clothes and skin from the barbed wire as we climbed over the nearer and and lower fence by a turning post. Jaywizz scaling the barbed wire fence with the aid of pipe insulation. The path between the fences.

It was much easy walking between the fences for the next kilometre until the fences turned SSW and we could climb over a metal gate or non-barded fence and head up to the summit. There was more sun and also breeze when we stopped on the rounded unmarked summit (NO 02359 06064) for photos. Innerdouny Hill from the summit. Looking NW down our ascent (and descent) route

On the way down we retraced our steps between the fences, but continued further to find a gateway through the fence (at NO 01681 07081), an easy crossing of the South Quaich and a comparatively simple climb up to the forest track. 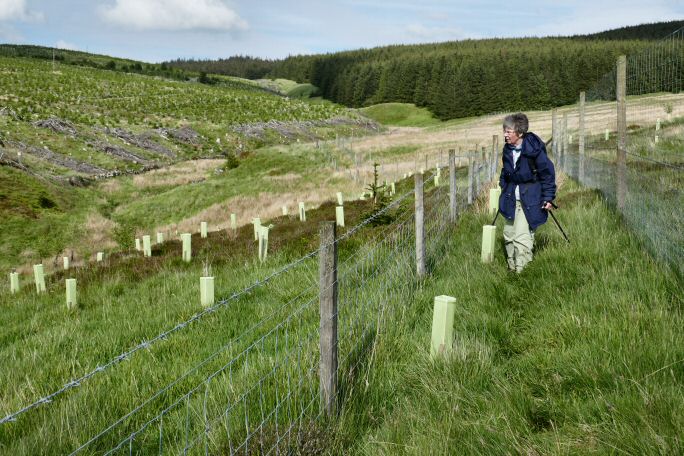 Continuing further between the fences. 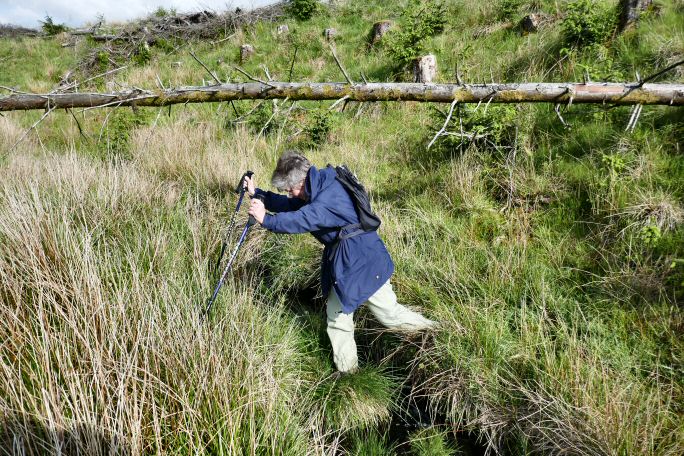 Crossing the South Quelch. Jaywizz didn't fancy using the tree to cross - neither did I! 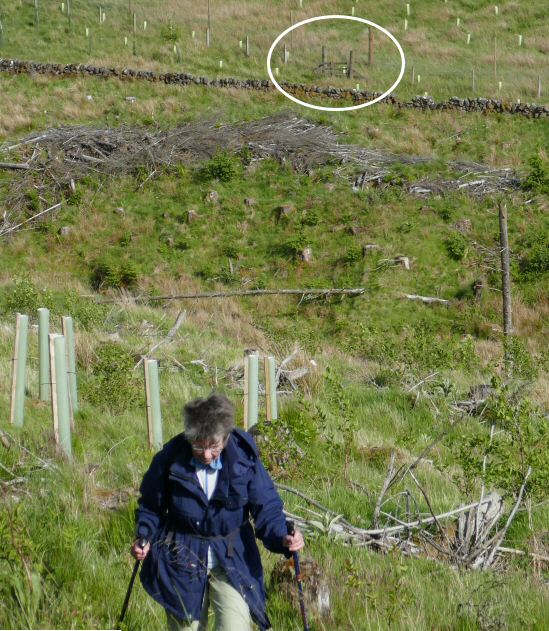 Very much better than the way we'd used earlier and recommended to anyone else wanting to visit this Tump, though most visitors seem to collect this from the south as one of the six Tumps north of Carnbo.