Monday, 27th. May, 2019:
Steve Chalk, Chris Powell, my son Tommy and I had walked in to the Glenbeg Bothy (at the head of Gleann Beag) over Am Faochaigach in rubbish conditions on the previous afternoon so, as we were cold and dripping wet, the bothy had been a real sanctuary. We'd been relieved not to have had to put up our tents in the rain and, with a supply of dry bog wood and peat in the adjacent shelter, we'd even had a fire to accompany our dehydrated food. A drop of whisky completed the day and made crashing out on the bothy floor an easy task; luxury! 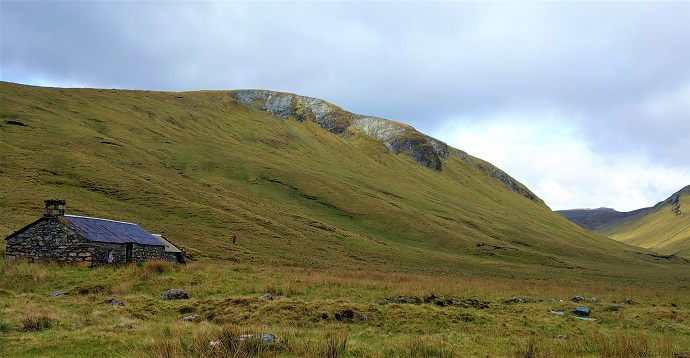 Glenbeg Bothy in the morning

No surprise, though, that we were a bit reluctant to get going in the morning but brightening skies saw Steve, Chris and me away at around 10.00.am., heading for the five Munros that circle the head of this remote glen. (Tommy decided to stay and enjoy the remote location of the bothy, reading in the sun and cutting more bog wood and peat for future residents,) More usually climbed from Inverlael Bridge, these Munros define much of the watershed at the eastern end of Gleann Beag and the bothy here provides a relatively unfrequented but logical stepping off point for traversing these hills in the heart of some wonderfully remote country. The early walking was straightforward and we crossed the main river (the Abhainn a Ghlinne Bhig) easily after the previous day's spate conditions had subsided overnight. We then plodded steadily up the steep slopes of Meall Feith na Slataich in the morning sunshine and, as mist blew in from time to time, we gained the extensive plateau-ridge above. The mist, however, parted regularly to let the increasingly hot sun make the ground steam and we reached the top of Seana Bhraigh in good order. 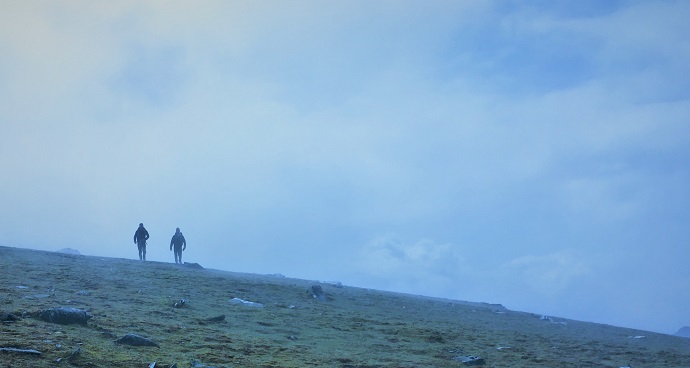 Chris and Steve descending from Point 906m on Seanna Bhraigh 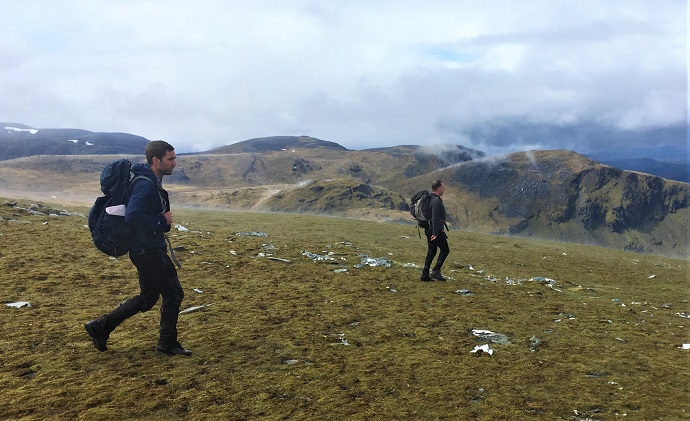 
our_route.gpx Open full screen  NB: Walkhighlands is not responsible for the accuracy of gpx files in users posts
From the summit, it was an intricate but delightful wander around the spectacular head of Cadhar Dearg (across the wild recesses of the Gate of Ca'-derg) and then up through complex ground and fleeting mists to the summit of Eididh nan Clach Geala. It felt grand to be out in a really remote landscape. Chris and Steve by a cairn on Eididh nan Clash Geala

From here, the Munros started to come thick and fast and we gained the subsidiary top and then the summit of Meall nan Ceapraichean after an engaging ascent which skirted a couple of big surviving snow drifts. A lone walker encountered on the top spoke of snow flurries on the still cloud-capped Beinn Dearg, further south. Leaving the cairn on Meall nan Ceapraichean gave an easy descent to Lochan Uaine on the watershed between Gleann na Sguaib and the upper reaches of Gleann Beag - the stepping stone to a steep climb alongside the "destitution wall" of the 1840s and the summit of Beinn Dearg. The wall is in remarkable shape given its age and (politics alert!) it's a stark reminder of the limits of philanthropy in the unregulated capitalist economy of the Victorian era. That said, a quick descent alongside the wall and an equally quick contouring traverse brought the slopes of Cona' Mheall underfoot and, failing to appreciate from the west just what a terrific mountain this is, we arrived on its summit pretty quickly. A direct way off to the north and to Coire Loch Tuath wasn't on the agenda but we found our way down the steep slopes below the col to the west and were soon battling through the trackless ablation moraine deposits to the west of Loch Tuath. This was followed by some awkward contouring along the northern shores of both Loch Tuath and Loch Prille before we were able to turn north east and head over the low watershed which separated us from the slopes above the bothy. We arrived back at around 7.30.pm. to find Tommy (who had seen no-one all day) labouring across the Allt a'Chuaille with bags of bog wood and freshly cut peat - but there was nothing dry enough to burn in the hearth on our second night in the bothy.
Postcript:
We had intended to head out early the next morning to liaise with Alex (a former student) and climb An Teallach but a growing consciousness of the miles back to the car triggered a lethargic attitude and our progress back to Torrandhu Bridge was relatively slow. A trudge back to the watershed saw us take the left bank of the Allt Lair past the spectacular outflow from Loch Prille, past Loch na Still and past Loch Coire Lair to a much easier crossing of the Abhain Coire Lair than we had had on our outward journey. All in all, it was little more than a gentle stroll in the sunshine but, needless to say, we didn't link up with Alex until later that evening in an Ullapool pub. It had, however, been a good three days on the hill and, having climbed my first Munro back in 1975, I was finally down to my last hundred! Will I finish?

our_route.gpx Open full screen  NB: Walkhighlands is not responsible for the accuracy of gpx files in users posts
Next Report: https://www.walkhighlands.co.uk/Forum/viewtopic.php?f=9&t=89833