Munros included on this walk: Am Faochagach, Ben Wyvis


Sunday, 26th. May:
Steve Chalk, Chris Powell, my son Tommy and I had driven up from the south of England through worsening weather on the Saturday to camp in persistent drizzle by the Black Water in Contin. The weather was sufficiently bad that we took refuge in the bar of Contin's only pub, the Coul House Hotel - too posh for us, really, but it was dry and warm!
The next morning, we'd pencilled in Ben Wyvis for a warm up so we were away in reasonable time and, leaving Chalky to guard the car and dream about walking up this hill on a sunny day with his dog, we lurched upwards in a steady drizzle and swirling mists. I reckoned that I identified the location where Martin Moran had experienced a cornice collapse and avalanche on his winter traverse of the Munros back in 1984-85 (an observation given particular poignancy by the tragic news from Nanda Devi a few days ago) but that was, really, the sole point of interest. It was three and a half hours of straightforward, viewless effort on an engineered path which, at least, made us realise that we weren't quite as fit as we'd have liked to have been and that the rivers were very much in spate.

our_route.gpx Open full screen  NB: Walkhighlands is not responsible for the accuracy of gpx files in users posts
The spate conditions became a bit more of an issue when we moved up the Ullapool road, parked at Torrandhu Bridge and set our sights on Am Faochagach across the Dirrie Moor and the Abhainn a' Gharbhrain - a tough call! 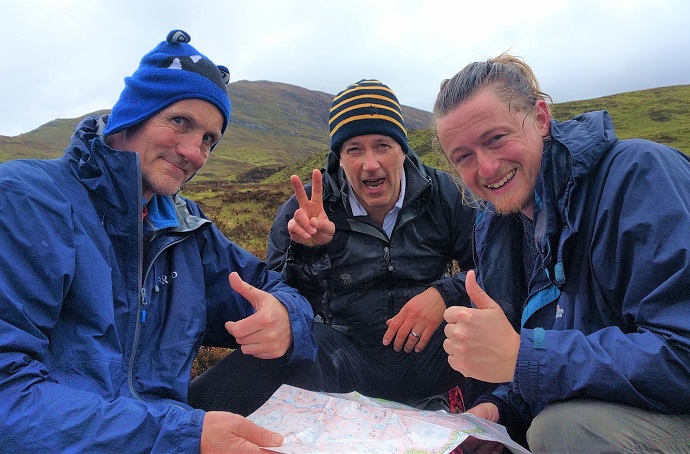 Me, Steve and Tommy psyching up to an attempt at crossing the Abhainn a' Gharbhrain

Chalky and I made the first effort, loosening off our rucksack straps and, braced against each other, we waded into the torrent. We gave up just before the deepest, fastest section of the channel as the water reached (and chilled) our testicles and we retreated to consider our options. Reason suggested that the burn might spread out as it entered Loch Glascarnoch so, after a quick discussion, we headed downstream for nearly 2km (to a location which the map suggested was well under the level of the loch) and managed to cross with the water rising to only a little over knee height. Easy, really, and nobody had drowned... 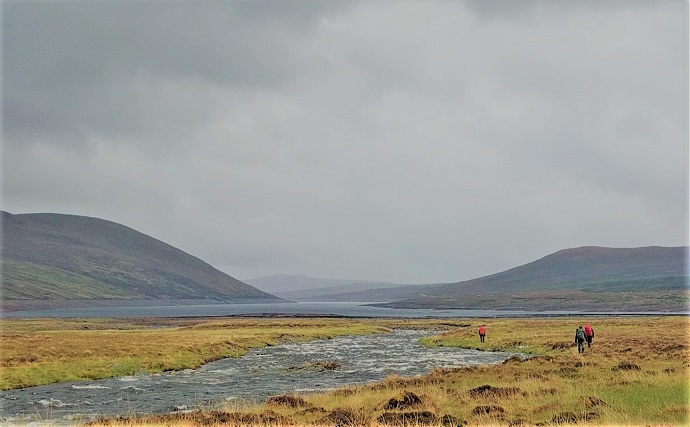 After that, it was back to slogging up into the mist - although, this time, our rucksacks contained food, fuel, sleeping bags, stoves, tents, etc. for two nights as our intention was to traverse the hill and descend to Glenbeg Bothy in the upper reaches of Gleann Beag. This we duly did... but, although it was bracing, it wasn't especially pleasant and seeing the bothy eventually come into view below us wasn't too upsetting. 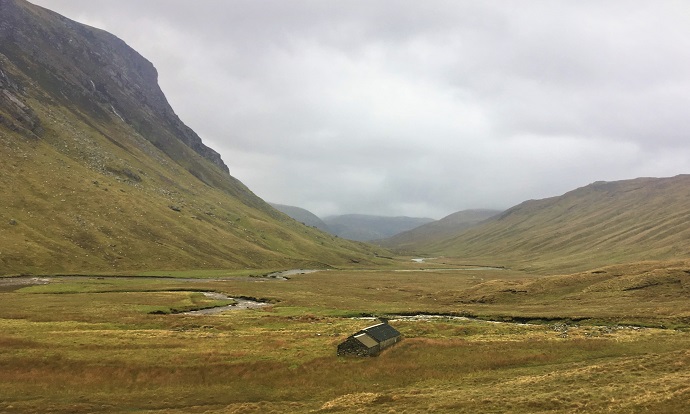 Once inside, of course, it was brilliant; we were the tenth visitors of 2019 in the bothy book and some good souls had even left enough dried bog wood and peat for us to have a fire alongside the evening dram. Excellent!

our_route.gpx Open full screen  NB: Walkhighlands is not responsible for the accuracy of gpx files in users posts
Tomorrow, we'd be heading for the ring of Munros at the head of the glen.