Off bus too soon but great walk by loch and canal

Off bus too soon but great walk by loch and canal


On Saturday 25th May Moira and I broke the journey home from Arrochar to walk the part of the WHW we had missed when the driver put us off the bus at North Laggan instead of South Laggan. I don't think it was because we were misbehaving but that he misunderstood where we wanted off and once we realised it was wrong he had gone. We briefly discussed walking to South Laggan and back but that would have made things tight for later so we left it to be finished at another time.

The 25th May was cloudy and wet - unlike the blue sky day we had on 25th April when we did the main part of the route. We met a few cyclists on the route but hardly any walkers and those we did see we felt sorry for doing this lovely stretch of the GGW on such a grey day. But grey day or not the bright yellow broom was doing its best to cheer us up. I prefer broom to gorse - maybe because it reminds me of the time my second son was born when all the country roads were ablaze with yellow broom. On reaching the A82 we turned round and retraced our steps back to the car at Laggan Locks. Recalling a meal at the Great Glen Water Park during a boat trip to celebrate my dad's 80th back in 2002, we detoured in to see if we could buy a coffee and use the loo, but were given short shrift by a woman who said the place wasn't open. Well we didn't know that. Who knew there was a station at Invergarry? There are seemingly plans to revamp the station - with maybe a station tea room for GGW users who are not welcome at the Water Park?

There follows several miles of pleasant walking along the east side of Loch Oich, through native woodland of the Letterfeirn Nature Reserve. Near an abandoned cottage there is a composting toilet and a grassy clearing ideal for a picnic. This seems to be a popular spot for canoeists and has good views across the loch to the ruins of Invergarry Castle and Glengarry Castle Hotel.. The Way follows the line of the old railway which ran from Spean Bridge to Fort Augustus, built between 1896 and 1903. The idea was it would eventually reach Inverness, but that never happened. It closed to passengers in 1933 and was last used during WW2, before being dismantled.

Old railway tunnel with bat boxes at each end Towpath view back to Loch Oich When we reached the Aberchalder swing bridge we were on to part of the GGW which was one of our first walks together, when it rained so much Moira's phone never recovered from the soaking it got. Around Kytra Lock a cyclist we had met earlier beside Loch Oich caught up with us and decided to walk the rest of the way to Fort Augustus. She came originally from Orkney but lived for much of her life in Dundee and it was remarkable how many people we knew in common. 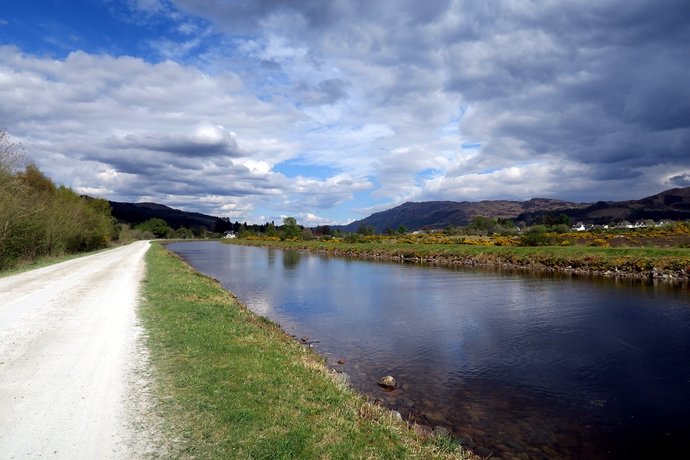 The locks at Fort Augustus As we reached Fort Augustus the sky darkened and we commented on how often we've been fortunate and the rain has only started once we're back in the car. It made a pleasant change from the day of the mobile phone drowning!

Interesting write up of this part of the Great Glen Way. Wouldn't mind doing it sometime.

shredder wrote:Interesting write up of this part of the Great Glen Way. Wouldn't mind doing it sometime.

rockhopper wrote:Tend to drive past or through this area so good to see what's in and around it - thanks

Me too - until I got the urge to walk it.