We were keen to climb Bla Bheinn as a round walk, approaching the main summit first and descending via the south ridge but were unsure whether to start from the north and walk back down the road or to start from the south with a more cross country route. It is hard to be enthusiastic about ending a day with a long walk down the road but what finally made up our mind up was passing cattle on the road. Previous bad experiences mean we will do almost anything to avoid encountering cattle. It is not often I feel grateful to cows but this occasion they mooed us to make the right decision and avoid a tarmac trudge. But back to the beginning, it was just after 08:00 when we set out along the path leading to Camasunary. There were fluffy white clouds in the blue sky, the black Cuillin Ridge was clearly visable in the distance and a handsome hairy fox moth caterpillar was enjoying a munch on the heather. About 2km along the path, just opposite An Mam, we turned right to make our way up Beinn Slat. We followed the left hand edge, enjoying the views of Bla Bheinn South Ridge. There was no obvious path but being mainly grass underfoot the going was not rough, although the undulating ground meant you were constantly wondering if you were picking the best route. At one point we came across a large number of Mountain Ringlet butterflies settled in the longer grass and woodruff. On Slat Bheinn with South Ridge Bla Bheinn Behind 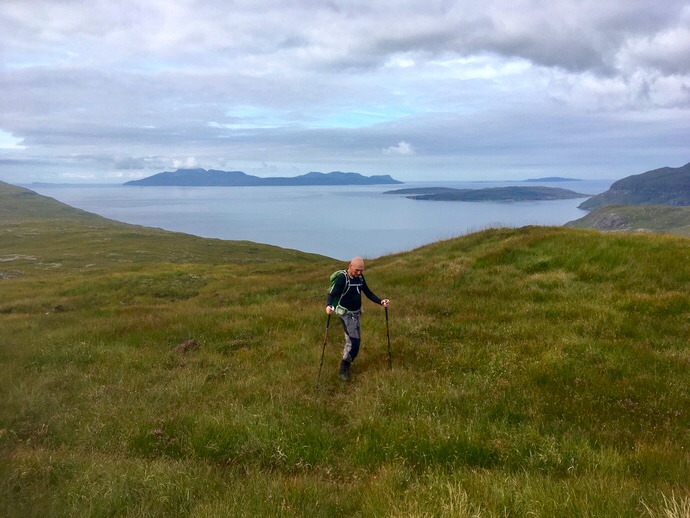 The top of Bheinn Slatt was a useful vantage point for identifying a way down to Coire Uaigneich. Top of Slat Bheinn beneath South Top of Bla Bheinn

This was the one section of the route we thought could give problems and had anticipated scrabbling down loose steep ground or navigating between craglets.
We were in fact able to descend a steep grassy hillside and by weaving around was we managed to avoid most of the scree. 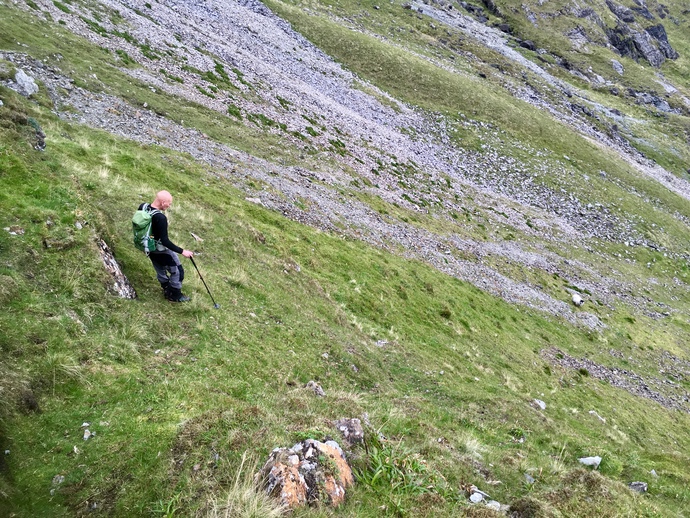 Coire Uaigneich was a beautiful spot and as it was 11:30 we felt we deserved a brew and an early lunch before crossing the stream and joining the regular path to Bla Bheinn Summit. The scree path leading up Bla Bheinn was not too gruelling, and at the top of the path was some magnificent rock scenery. The Top is Site

Followed by easy scrambling up to Bla Bheinn summit 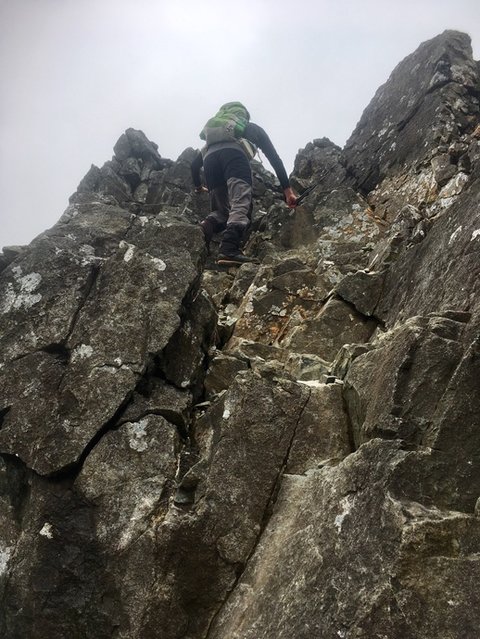 Scrambling to the Summit to enjoy some of the most magnificent views in Scotland (allegedly)
Oh well you can't win them all and we did have magnificent views on the way up.
We both enjoy scrambling, and were looking forward to the bad step before the south summit. However, sometimes we can be quite brave and other times somewhat timid, the grade of the scramble often seems to bear little relation to how difficult or exposed it feels is, so we always carry a rope and scrambling rack, just in case and today we were grateful for it.
As we arrived in the col there were two walkers, with large back packs coming down from the south top by traversing an exposed narrow eroded edge (path would be to polite a word). They definitely did not look like they were enjoying themselves and confirmed this when they reached the bottom. Despite being rock climbers they had found the descent nerve racking and were feeling quite disgruntled that a route guide had suggested they include this on a back packing tour with no real indication of what was involved.
We decided to give the edge a miss, but to rope up and ascend the steeper rock on the middle on col. A much pleasanter way to go, but there were just a couple of moves that felt precarious and we were grateful for the protection. View from the cul between summits Looking back at Bla Bheinn

The scramble brought us out on the south top and weather gods rewarded our efforts, the clouds had lifted so a summit break and refueling was in order. Jeremy on the South Top

The south ridge was an ideal descent route, mainly walking with some delightfully narrow sections and easy scrambling to add interest and views of The Cuillins and Loch Scavaig all the way. Whilst route finding down the ridge was relatively straight forward in good visability there were quite a few gullies, spurs and craglets to find your way through so it could be quite tricky in the clag or the dark. The South Ridge and Loch Scavaig A Rockier Section of the Ridge Parallel to The Cuillin Ridge Looking Back at Bla Bheinn from the South

Sometimes the descent is a necessary evil to get you of the hill but this was a descent to be enjoyed and savoured. At the end of the ridge the path leading down is initially very eroded but it soon improves.
We were back to the van for 18:00, grateful that we did not have a walk down the road and relieved that there was not an unfenced cow or calf is in sight.

Wow. This is a fab report.

Thanks very much! Glad you enjoyed it, we had a great day and a good way to include the South Ridge of Bla Bheinn.

Thanks John! Clach Glas, a route to dream about!

Had the same non views as you from the summit but it's still up there as one of my favourite hill days.

dogplodder wrote:Had the same non views as you from the summit but it's still up there as one of my favourite hill days.

Always a good excuse to go back, I think it will stay near the top of my favourites list too!