Winter on the Ben Lui Two

Winter on the Ben Lui Two


Winter on the Ben Lui Two 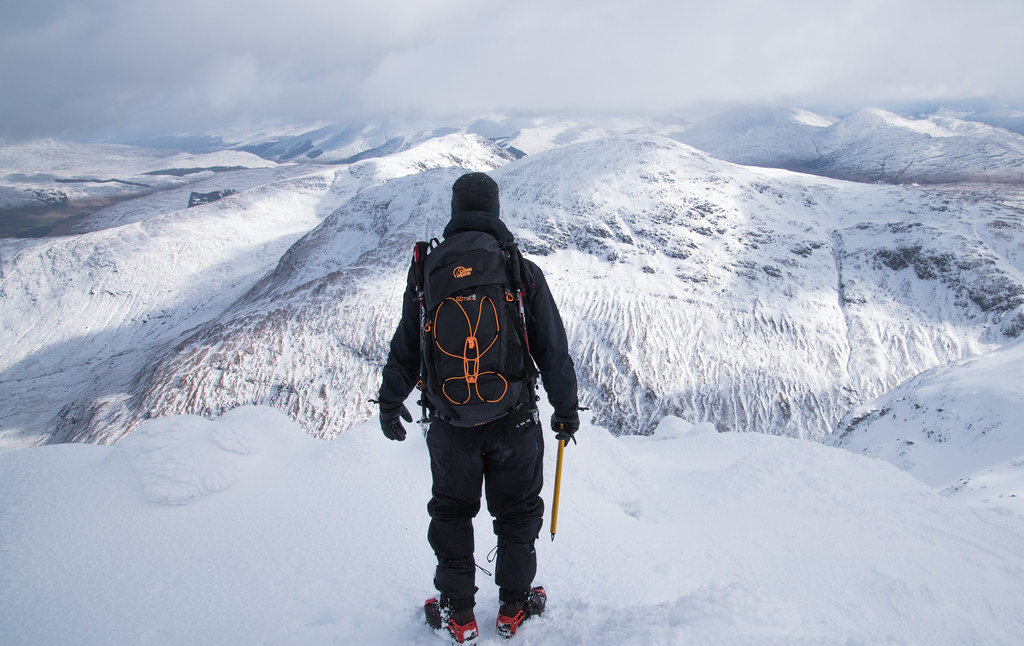 There is no hiding from the fact that I’d prefer every outing into the Munros to be an epic overnighter, but the reality is that’s unfortunately not always possible. This was “just” a day walk, but with the winter conditions in mid-March 2019, the Ben Lui two made for great and memorable day.

Having previously done a winter camp on Beinn Dubhchraig with the genuine intention to do all four, but having to bail out due to tiredness, a lack of motivation and an idiot (me) forgetting the car key… it seemed like a good idea to get back for Ben Lui two sooner rather than later. I know this would leave Ben Oss all by itself – a great excuse to come back.

Andrew and I set off from Aberdeen early doors and were ready to get walking by 09:30. I had the luxury of being a passenger which most definitely gives you more energy for when you arrive.

The weather was always going to be a mixed bag, but we decided to edge on the glass half full optimism scale, which I must admit shrunk drastically to a glass half empty as we got closer and closer to Glen Lochy as the rain and snow started.

I had been unsure about the river crossing and given it had been slightly wet over the previous couple of days our back-up option was to just do Ben Oss and avoid the River Lochy wade. 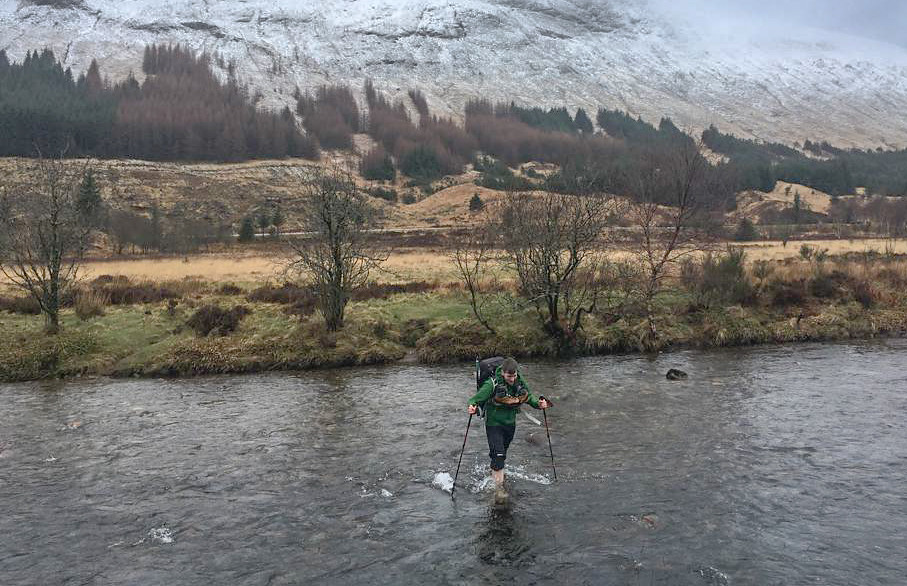 Looking back towards car – adrenaline flowing 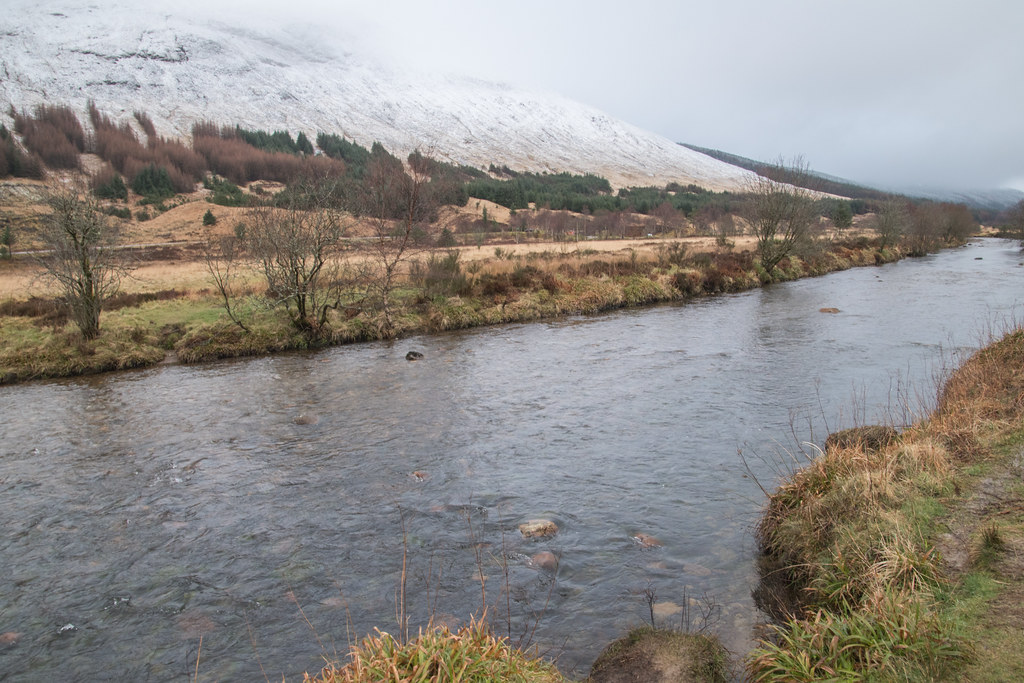 I remember genuinely believing the crossing alone was worth the numerous hours driving, daft really considering I could have just plunged my feet into some ice water in the bath.

After the high of the river crossing, the boggy trek through the trees was much less enjoyable, made even worse by the remaining poor visibility (which showed no sign of improvement) and the constant gentle snow fall. 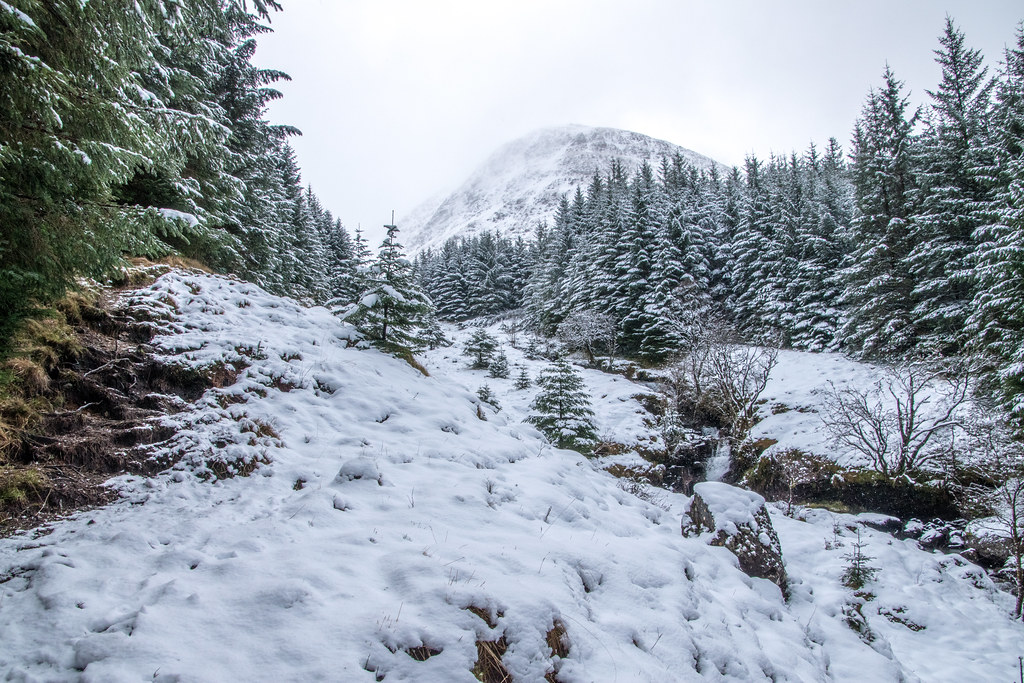 Once we reached the fence at 500m it was eerily silent, and visibility was utter pants. We made the decision to head almost straight south east towards the lowest point between Ben Lui on the left and Beinn a’ Chleibh on the right, instead of attacking Ben Lui from the West shoulder.

As we gained some height, we got some very brief glimpses toward Stob Garbh of Beinn a’ Chleibh and it looked insanely menacing. I really don’t think looking back the photos do it any justice, but then again they never really do, do they? 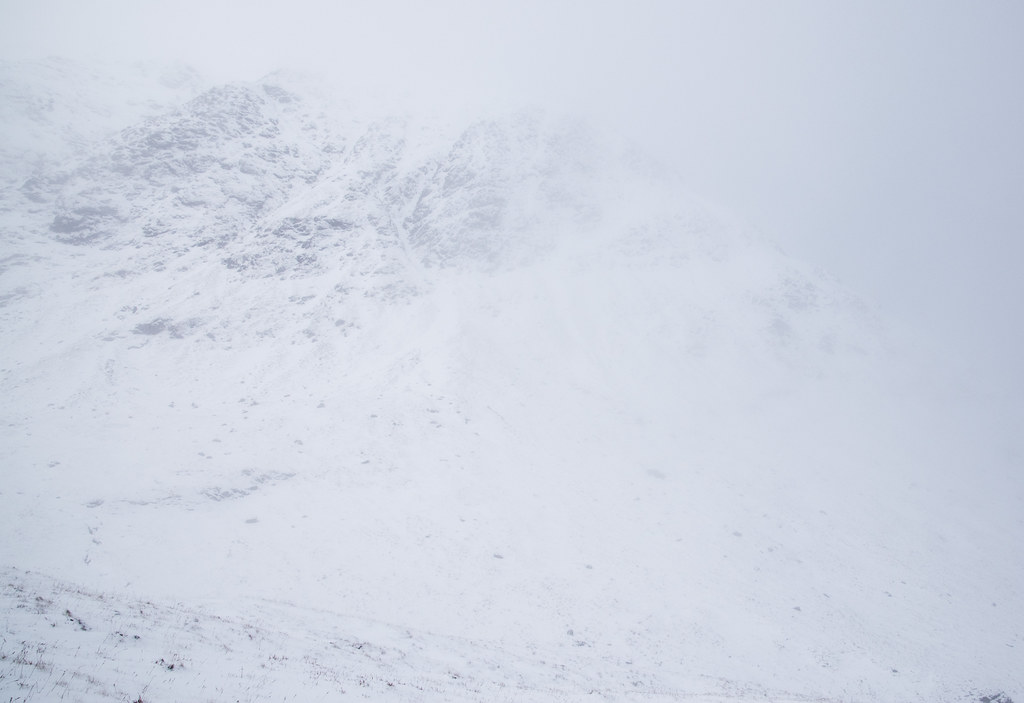 When heading up Beinn a’ Chleibh it was a real test of navigation and just on time the wind picked up to make any map handling or speaking to each other a right challenge. 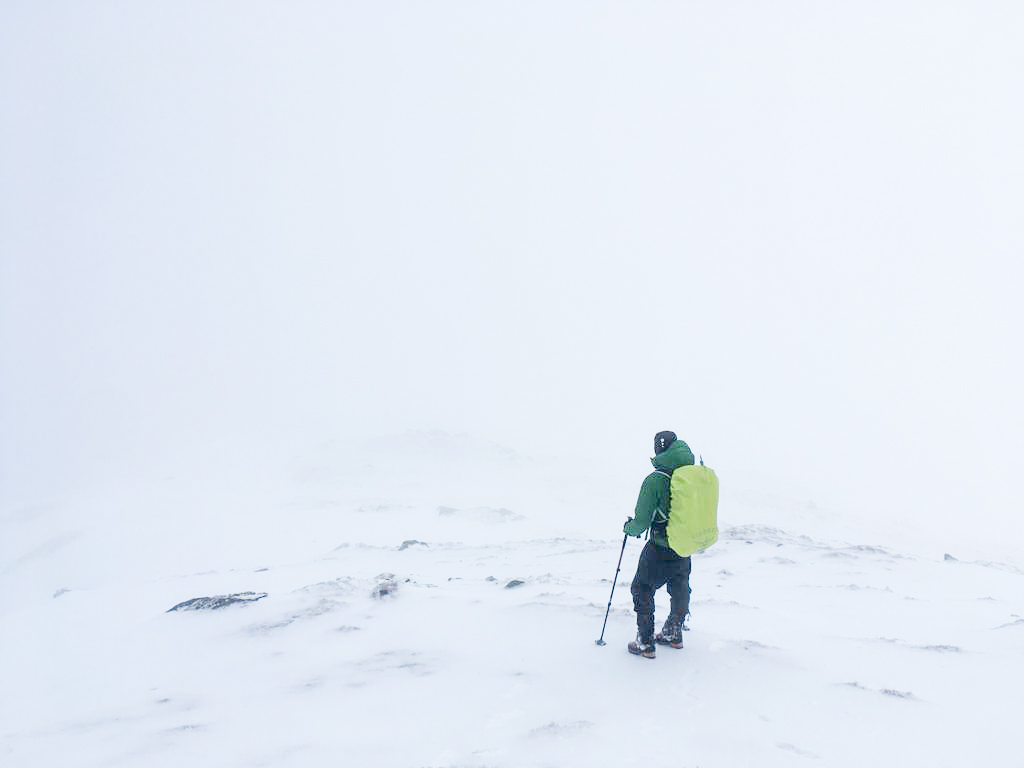 As is typical in the Scottish hills, by the time we had retraced our steps the summit opened up from the clouds and looked far less challenging than it had felt on the way up. 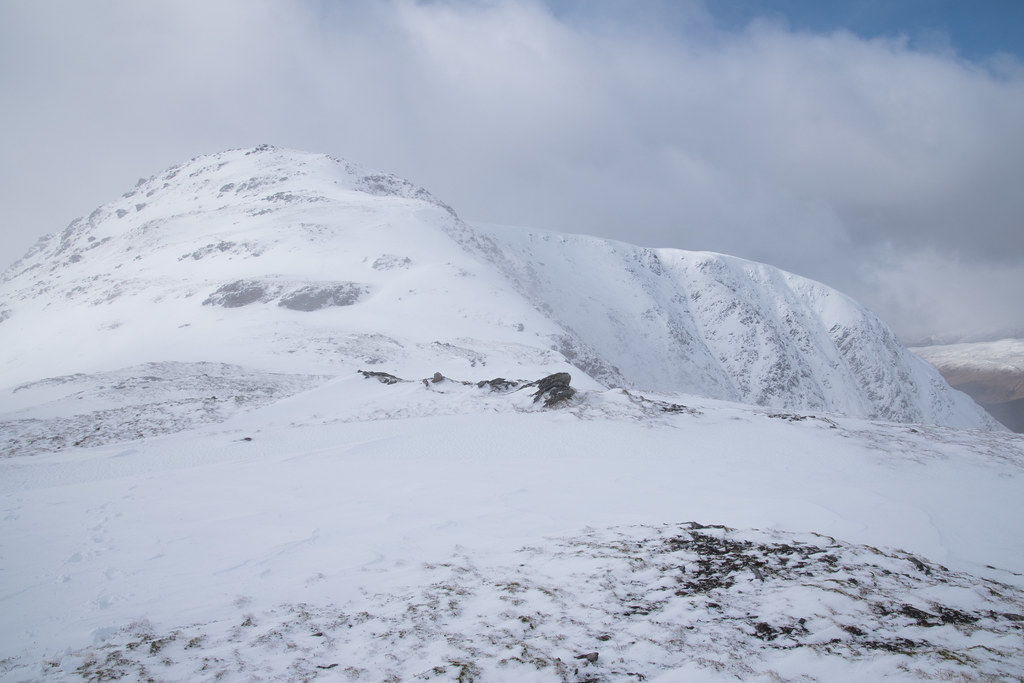 Heading up Ben Lui we took a more direct route instead of heading north east on what I assume is an easy path in the summer. The steeper terrain required crampons and was all going well until Andrew dropped his ice axe. With the icy snow it quickly slid down a good hundred meters (at least) and thankfully stopped on a large boulder – I did have visions of it going all the way to the lowest point between the two hills.

We stopped and had a quick chat about the best way forward; possibly we could wait to get it on the way back down, but in all likelihood, we would never had come across it, and it wouldn’t have been great to take a slip without the axe! We took the sensible option, I made myself a nice seat and dug my crampons in whilst Andrew used my axe so he could down step to reunite himself with the axe. 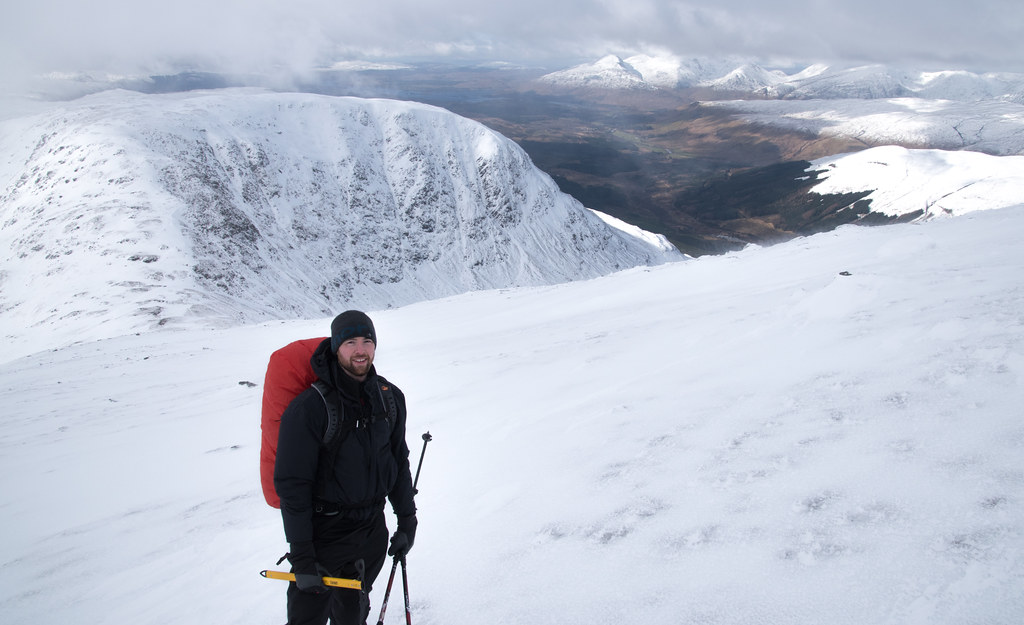 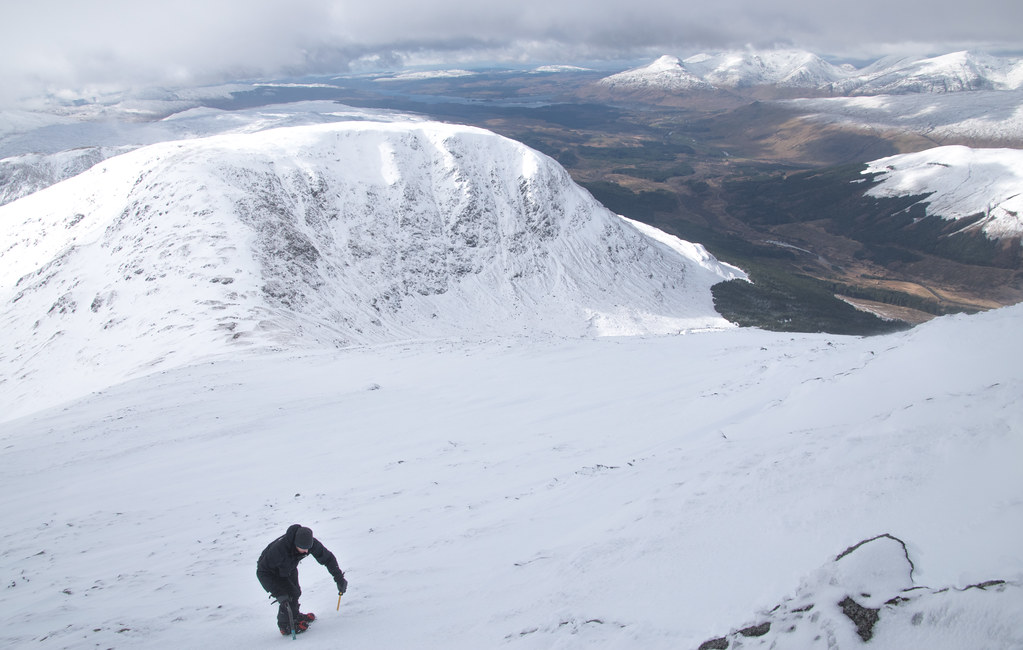 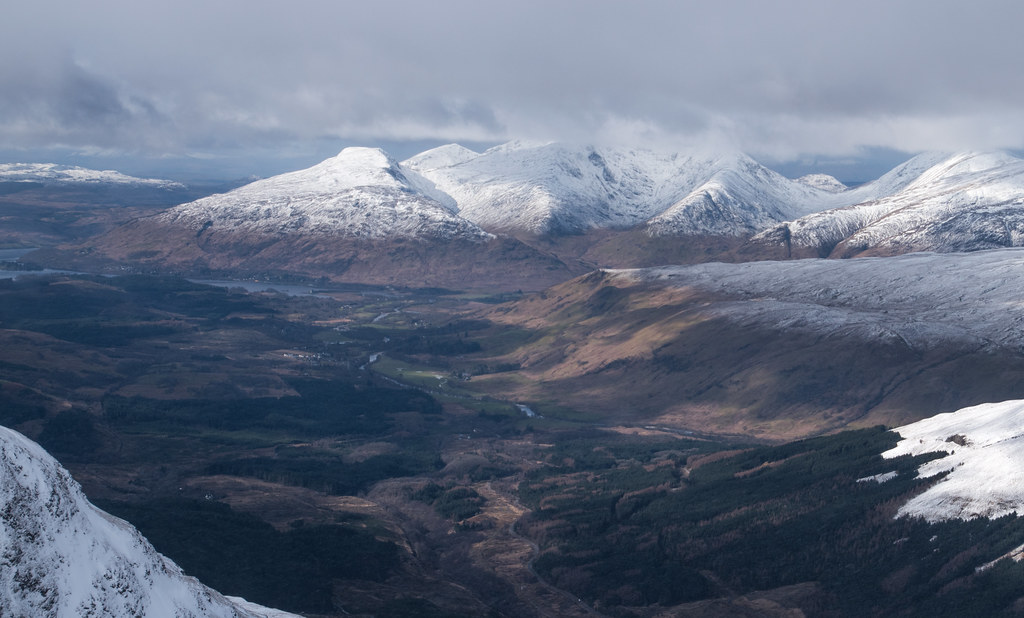 The final short push to the summit of Ben Lui was uneventful and with every meter gained the weather seemed to be slowly improving – it was turning into a great winters day, and the wind had nearly completely died down.

It was a relief knowing that we could see where we were going as I was well aware I didn’t want to overshoot the summit and end up falling through a cornice deep down into Ben Lui's Central Gully. 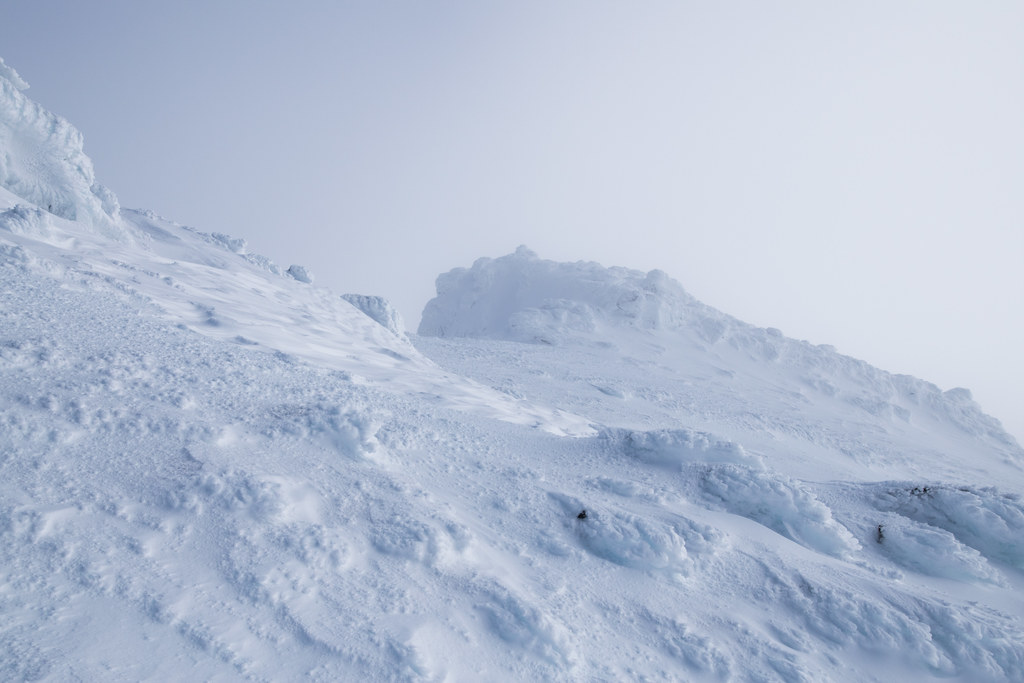 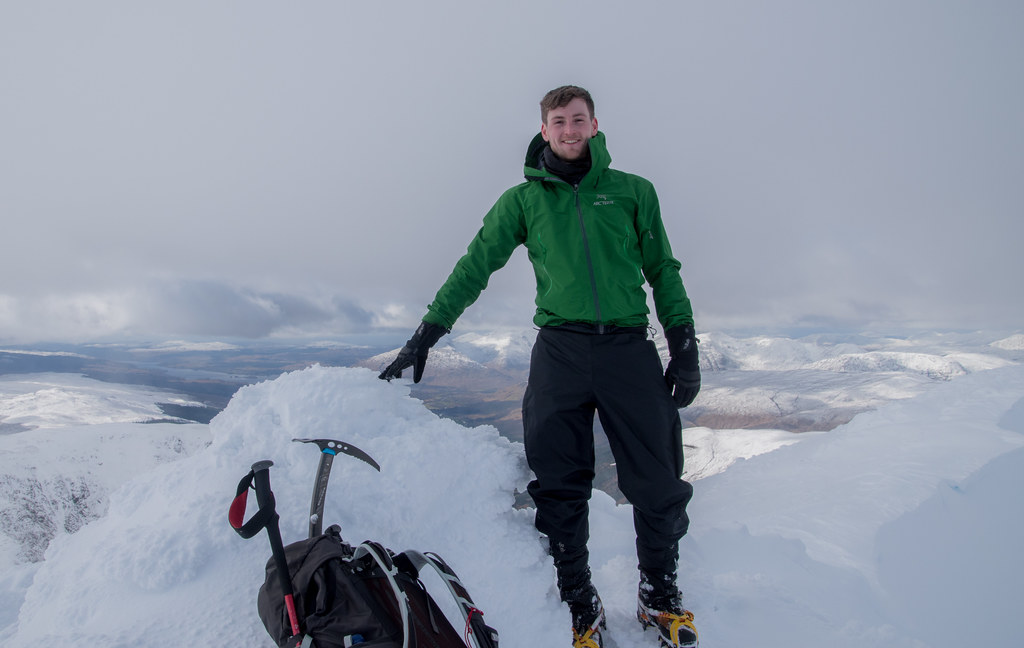 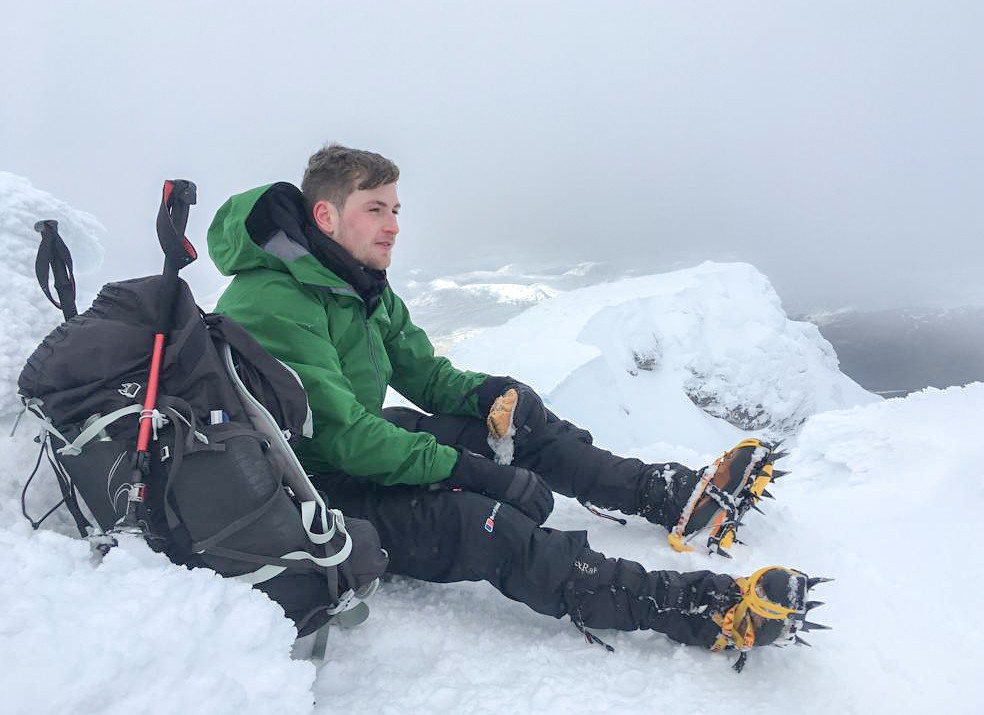 The snowy landscape at the summit was pretty special. The cornices were amazing, although very difficult to get a good photograph.

We stopped and spent a good fifteen minutes taking in the views and very briefly discussing if we would have time to include Ben Oss. Truthfully we probably would have had time, but we had so far had a good day and I remember saying, “let’s not ruin a good day but dying” – very much an exaggeration but we were at the summit for 14:30 and adding any extra distance really wouldn’t give us much light to play with if something went wrong. E.g. a minor drop of an axe could turn from a funny mishap to a massive problem. 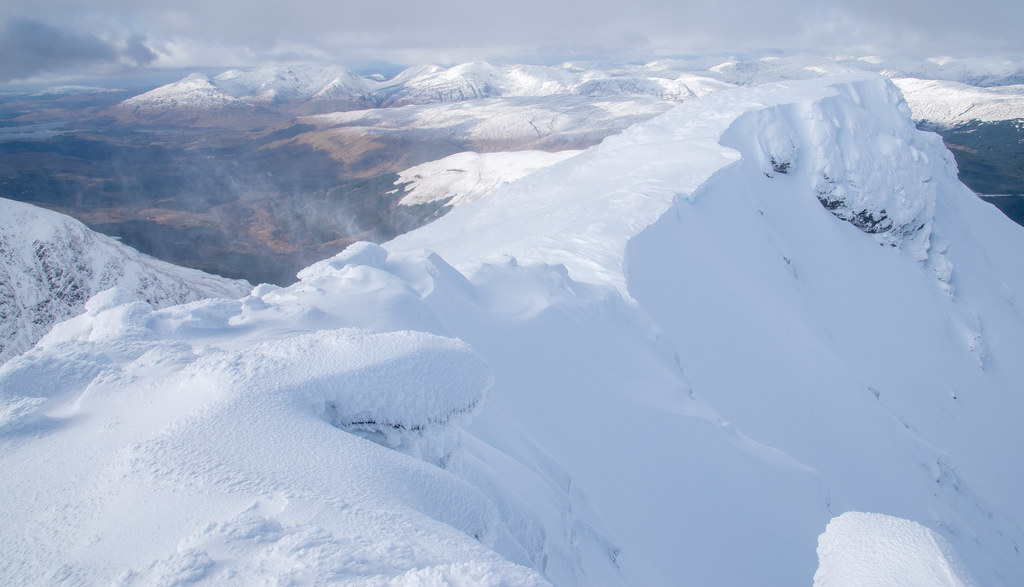 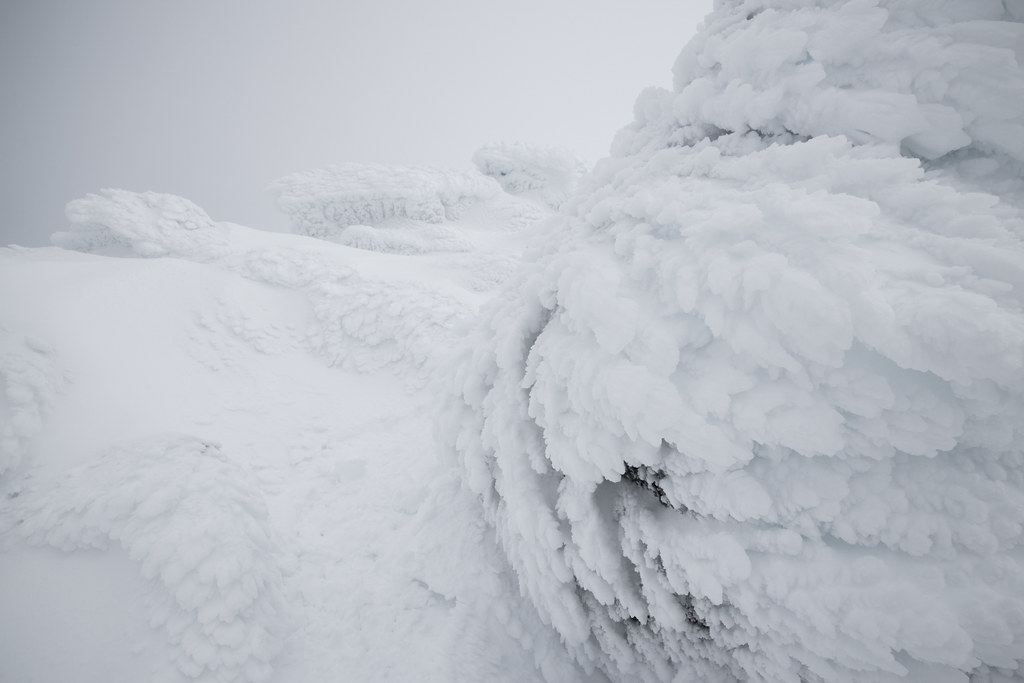 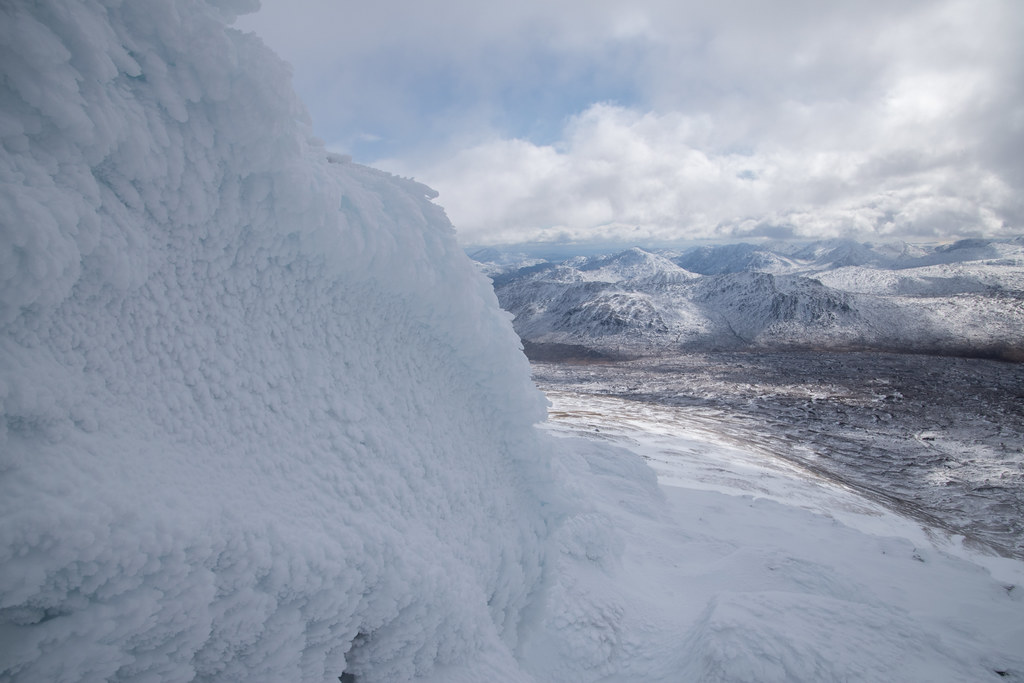 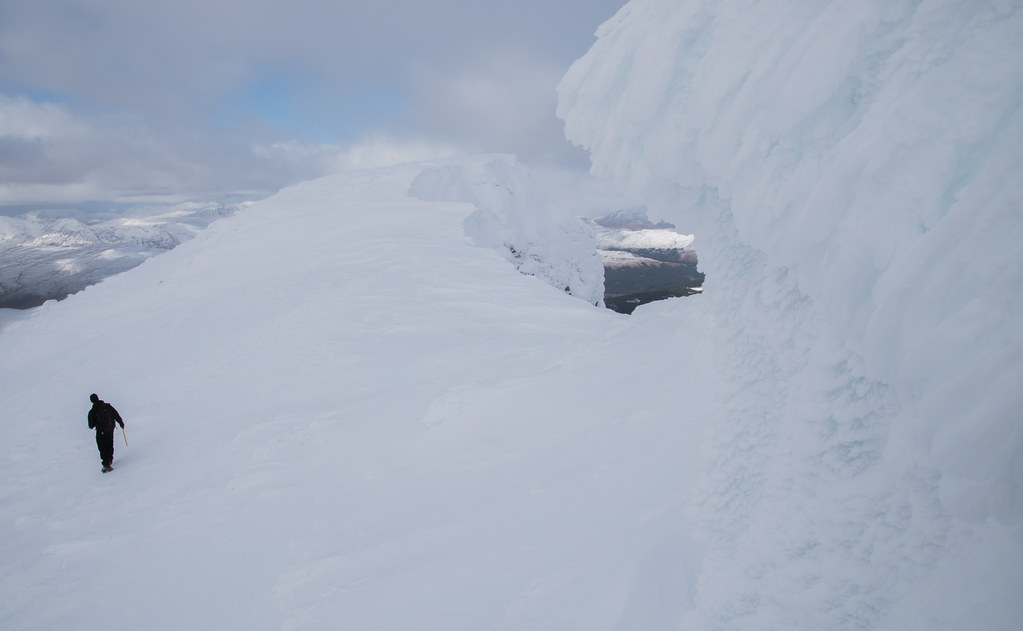 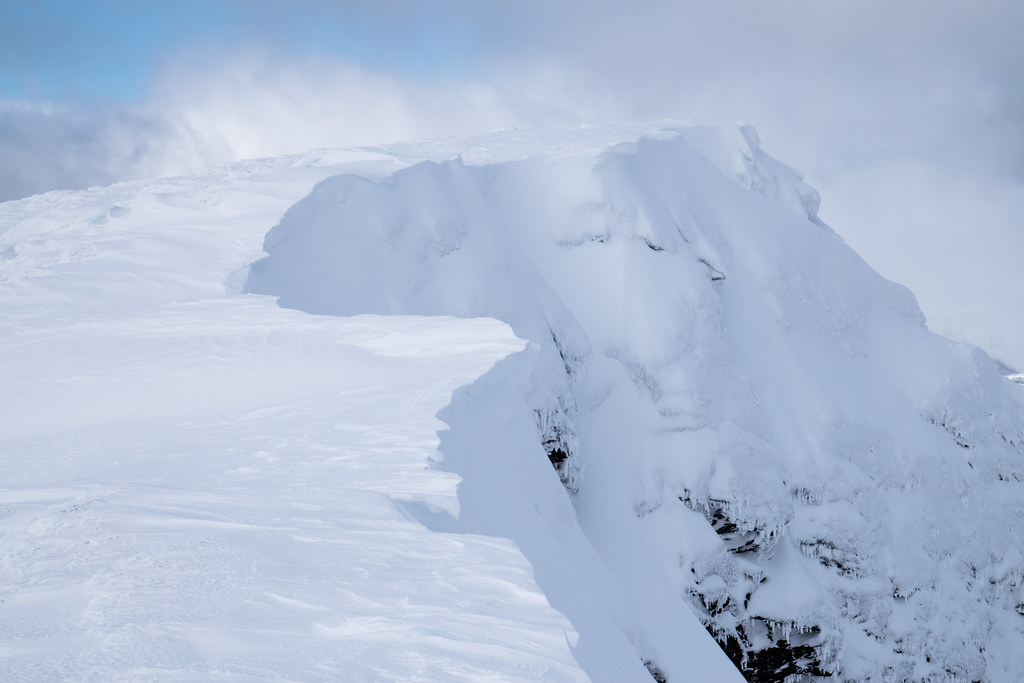 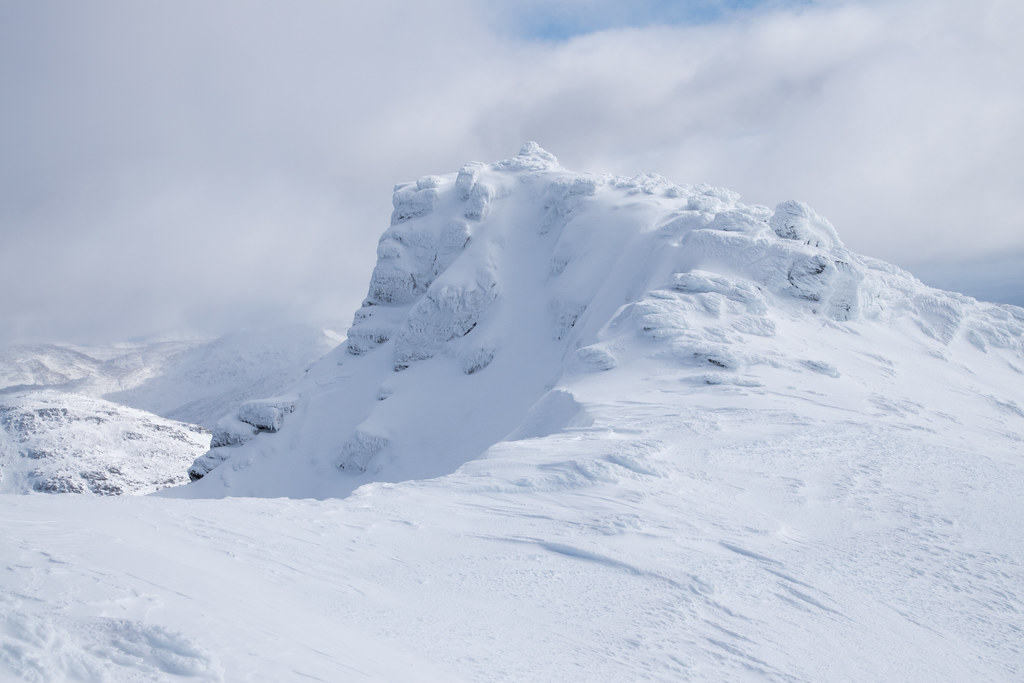 All that remained was to retrace our steps back to the car. We did consider going off the NNW shoulder of Ben Lui but we knew the route down was in good enough condition, and the NNW shoulder wasn’t visible when we came up, or from the summit so we took no risks.

The route down was good to start with but the gradual heat of the day had begun to melt some of the previously icy snow and made some steps incredibly slippery. After a few falls and slides, good self-arrest practice, we were out of the worst of it and heading back down to the woods.

Before the slips and falls – even greater views now 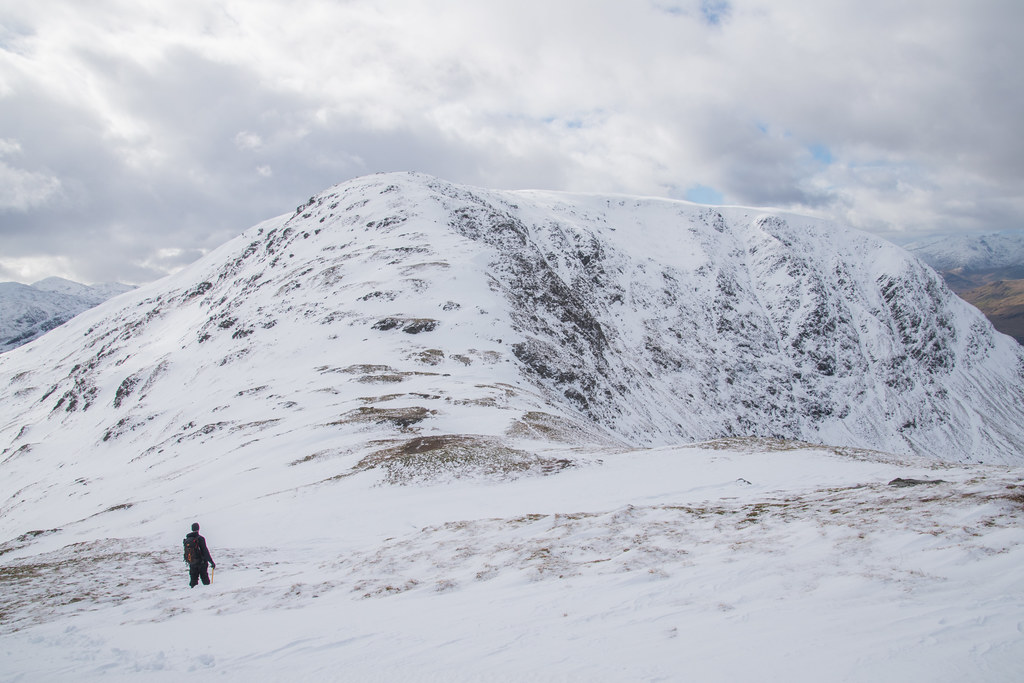 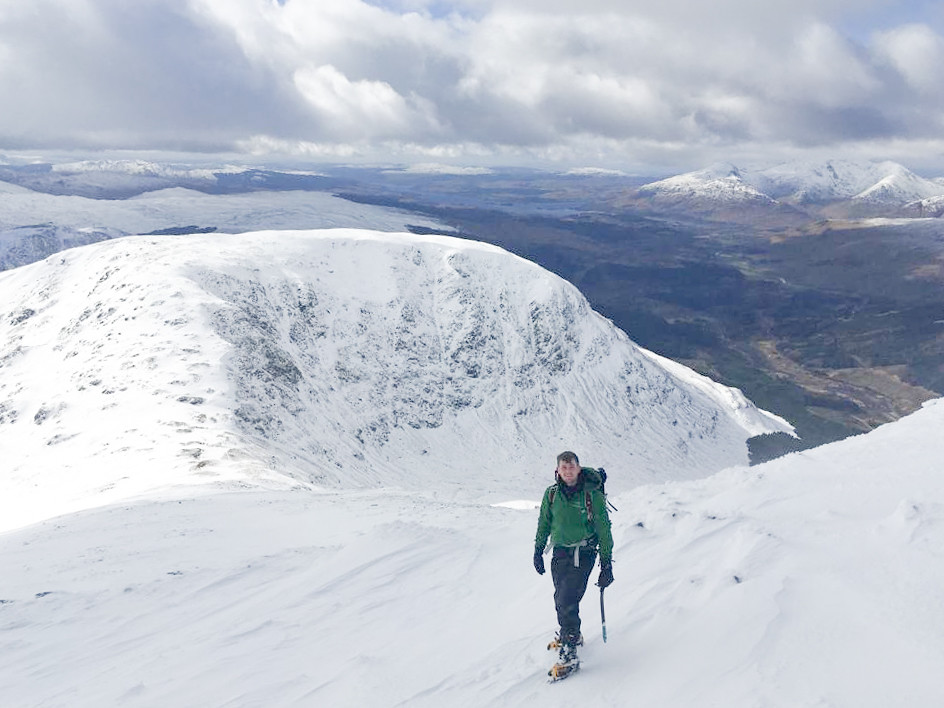 Once we got to the woods it was horrendously muddy and boggy – all previously hard ground was now a giant bowl of bog soup, this made it very hard going particularly with tired / tiring legs, I was waiting for one of us to deck it into the “soup”.

Quite remarkably we both made it down the muddy section without any slips, although I had a few near misses.

After quite enjoying the first river crossing, I was looking forward to the return crossing far less – it was safe to say the novelty / excitement had worn off. Andrew again went for the shoes off method, but I opted to give my boots a quick clean, and just ran across as swiftly as possible.

I had now over the winter months of 2018/2019 done 3 of the 4 Ben Lui Munros, leaving Ben Oss rather isolated. I am not sure how best to approach this, but maybe tackling from the South would be a nice, less trodden alternative. We shall see.

Re: Winter on the Ben Lui Two

Great report and pics! Love these hills, made 100x better by the winter coat. Good effort