Nearly forty years ago, I invited a group of skiing friends up to the Lake District and dragged them round a number of walks. This was repeated twice a year for a considerable time. I found however, that the "whinge factor" was greatly reduced when a lunchtime pub was included on the walk

The group eventually christened itself The Reluctant Ramblers" and owing to a business connection of mine we acquired a "logo" drawn by a well known cartoonist. The Reluctant Rambler
At the end of May this year two of the surviving members Boo and Bill came up to Scotland for ten days walking. The weather in the last few weeks has been pretty dire, but we managed to make the most of it and kept mainly dry. The question "where are we having lunch?" - a meal I have long given up - was however persistent, and today when the weather was set to improve in the late afternoon, we headed for the newly refurbished Kingshouse hotel, with Beinn a' Chrulaiste planned for later Kingshouse hotel - I thought the refurbishment had been done very tastefully and we had nice panninis in the bar.


our_route.gpx Open full screen  NB: Walkhighlands is not responsible for the accuracy of gpx files in users posts
The tromp across the exceedingly wet bog is best forgotten, but once on the SE ridge both the weather and the going improved and we made good progress. Closer view from a bit higher 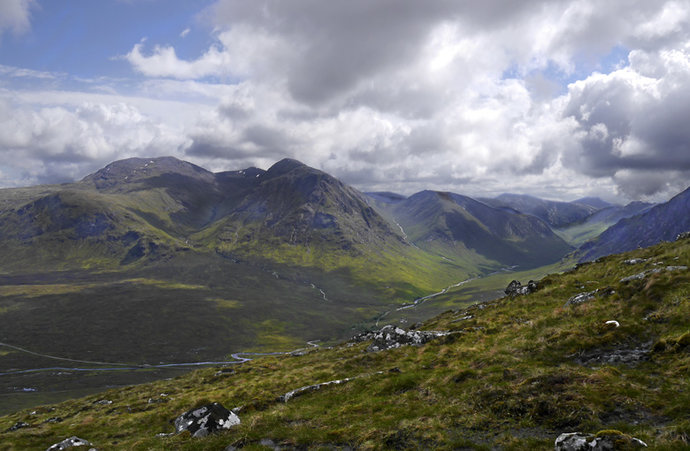 We climbed the steep part of the ridge quite quickly, but there are a lot of false tops before the cairn is finally reached Summit pic - cloud over the Mamores behind Down the Blackwater reservoir Stob na Cruaiche with Schiehallion on the horizon To the West the Buchaille dominates South East again to Achaladair etc.
The original plan was to traverse the two subsidiary tops of Meall Bhalach, but that meant returning over the awful bog

so we headed down towards Altnafeadh planning to return along the WHW - dull but dry. On the descent: Glen Coe looking a bit brighter: Bidean and Stob Coire nan Lochan out of the cloud Looking down to Stob a'Chrulaiste; We hoped to head down to the L from here, but the steep slopes are convex at the top, it was difficult to see the best line and we decided against it and followed the standard route We stopped for a rest - face to face with the Buchaille And straight through the Lairig Clouds to the N finally clear We pushed on down the rather muddy track to reach the WHW: near the bottom The 4.4km walk back along the Way took nearly an hour: view from the hotel in the evening sun

Superb, I really enjoyed that and you got some cracking photos!

Chris Mac wrote:Superb, I really enjoyed that and you got some cracking photos!

Yes - Some of course were more "reluctant" than others

. However they come out and visit us in Switzerland periodically - It's probably nearer

Excellent, and some lovely photos. Climbed this with "The Blether Girls" (self explanatory) a group I had "met" online. I came equipped with excuses for a quick exit if they had turned out to be other than advertised, but they all looked exactly as they did on-line, and were much better bletherers than me....as well as having a 20 year better claim to be "girls".