Hill of the bald, red head. In effect, me. Initially, I had considered a much bigger day - the Achnashellach 3 or 5, with Bearnais bothy thrown in but the logistics of slogging a heavy pack over 3 Munros sounded unpleasant. I also wanted to try and run something. What I decided was to hike in to Coulags bothy, dump my large pack and run light up on to this Munro, with adjoining An Ruadh-Stac. If I felt fit enough, I could get back to the bothy, have some lunch and then try for Sgurr Ruadh and Fuar Tholl. In the end, I picked sensibly.

I hadn't been to Coulags or this glen before so virgin territory is always taken in with utmost attention. The bothy was a quick 40 minute pad and was impeccably clean throughout. A definite overnighter would be had here. I packed my light gear and sped off along the stalker's path up the glen and past the infamous dog-tethering stone, a portent of things to come. It was cloudy but mild and I sensed an improving day. I rapidly made ascent up the path and passed a lady with her 5 spaniels! She too was going for the Munro and we would bump into each other several times over the course of the day. I reached the bealach in good time and then began the yomp up the scree paths to the bald, red head. I had whacked on the Factor Duffelcoat just in case. It was quite a tough ascent, especially the boulders before the summit cairn. From there, I had some liquid and food and watched as the cloud rolled away to reveal Torridon. It felt a little anti-climactic after having been blown away by the views to An Ruadh-Stac and beyond.

I looked back to Fuar Tholl and Sgurr Dearg and thought that combining those with the Munro I was on PLUS the Corbett would be a very tough day. I therefore decided to just relax and take my time, which was essential getting back to the scree slopes to the bealach. From here, I nipped down to the large lochain and refreshed my water bottle before getting ready for the 360m ascent of the Corbett. What a stunning place to be, with views back through the gap to a Corbett I'd done a few years ago, Beinn Damh. The climb up the slabs and awkward path was arduous and I began to feel my lack of hill fitness kicking in. I was elated to reach the top and touched the eventual summit. I sat down and texted my wife to say all was ok and that I'd be lunching at the bothy before a walk back out and finding a hotel. As it was 1345, I had plenty of time ahead of me. The descent demanded absolute attention and I was grateful to get back down to safe ground. All that remained was to run down the fabulous stalker's path to the bothy, where I cooked up a fab veggie bean chilli. I even had it with a can of beer, which was sublime. An easy wander back to the car and it was another fab hill day. This combination offers one of the best hill-walking experiences in Scotland, in my opinion. 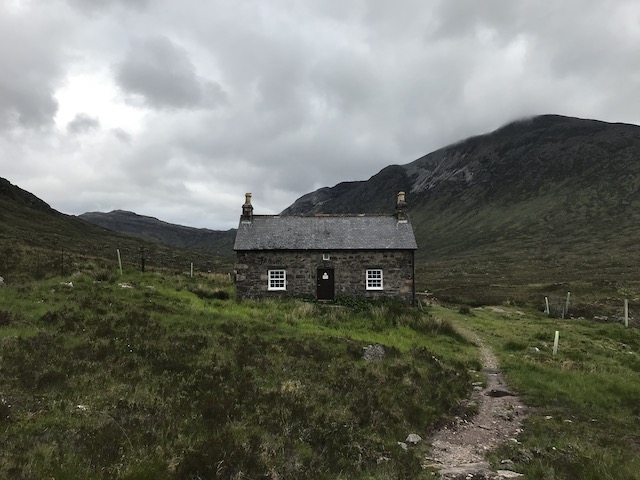 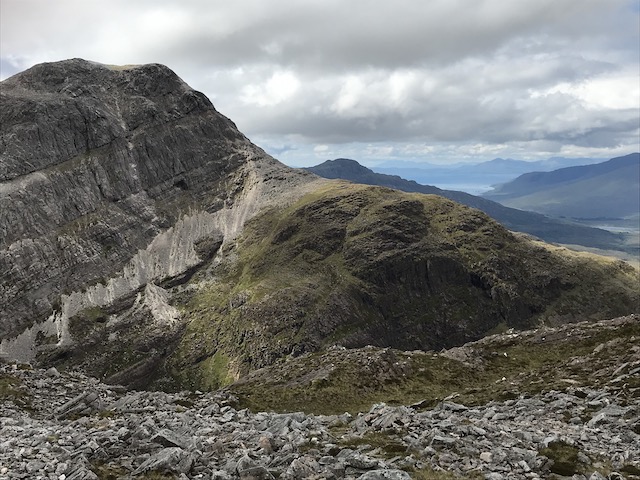 Majestic An Ruadh-Stac with sea beyond Beinn Damh across one of the many lochains in this area Looking down from An Ruadh-Stac 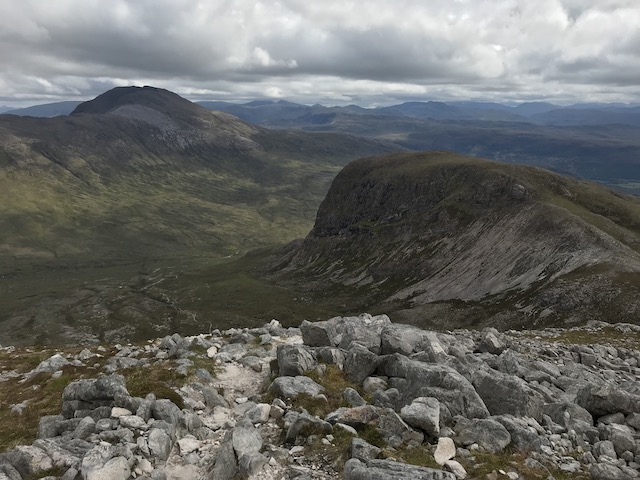 Re: Bald, red head and going grey - 2 hills describing me

Its a pretty good description of me too...

A fabulous area this, and the wee lochan, surrounded by the wild bare rocks below An Ruadh-Stac, is a truly special place. Thanks for reminding me of it.