Another cunning plan comes to fruition ... well, almost. Gammy was supposed to be joining Bod, Valerie, Quincy (Heather) and myself in the far north to tackle the Beinn Dearg circuit. Sadly, he was unable to make it for personal reasons, so we had to just push on regardless. It was to be a particularly special day for one member of the party, and just very special for the rest of us. Oh, and we were joined by my nine-year old Border Terrier Maisie for what was to be the biggest walk of her life! (Still not speaking to me)

On the previous evening we had been fortified with fish and chips and beers at the Seaforth, strictly for carb loading purposes you understand, and were rewarded with a rather fine sunset:

Girding loins and stuff at the start: 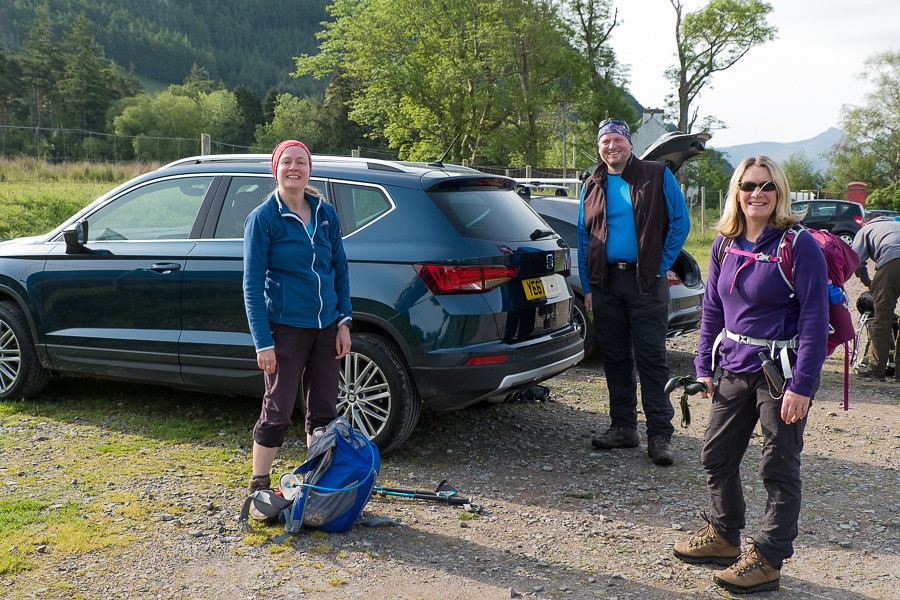 We set off for the long, long walk in through the forest and then up the excellent stalkers' path to the distant Bealach an Lochan Uaine. During the week the forecast had had a distinct whiff of "iffiness" about it, but we were blessed with dry weather - at least to start with.
Heather was amused by the amendment to the sign at the start of the forest, but did promise to buy us all a beer if the pub was open on top of Beinn Dearg ... 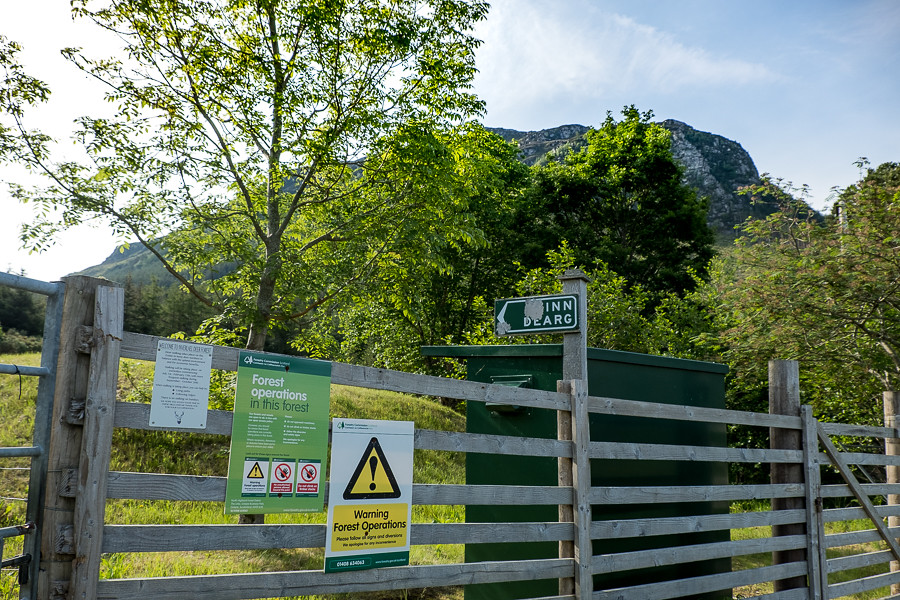 First view of the hills: 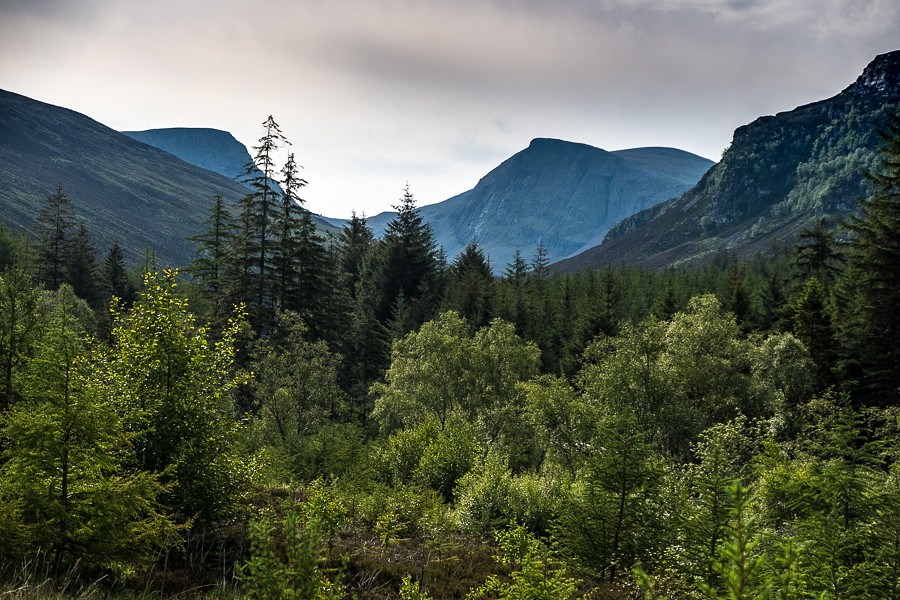 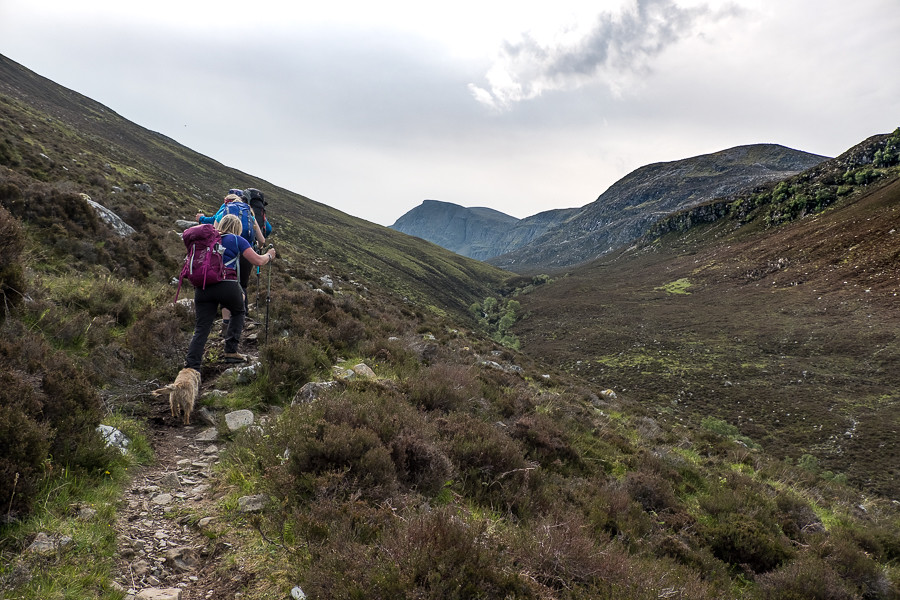 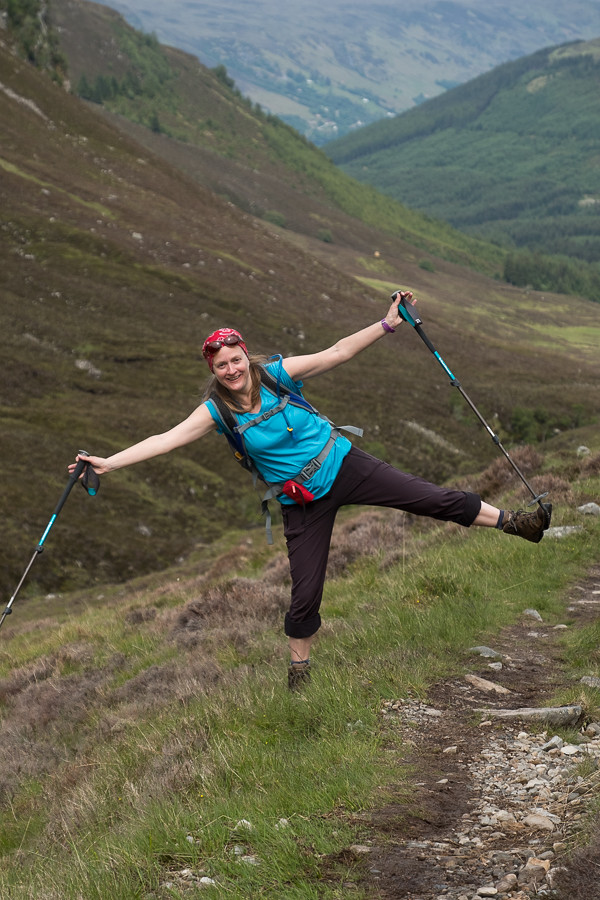 A small burn to ford: 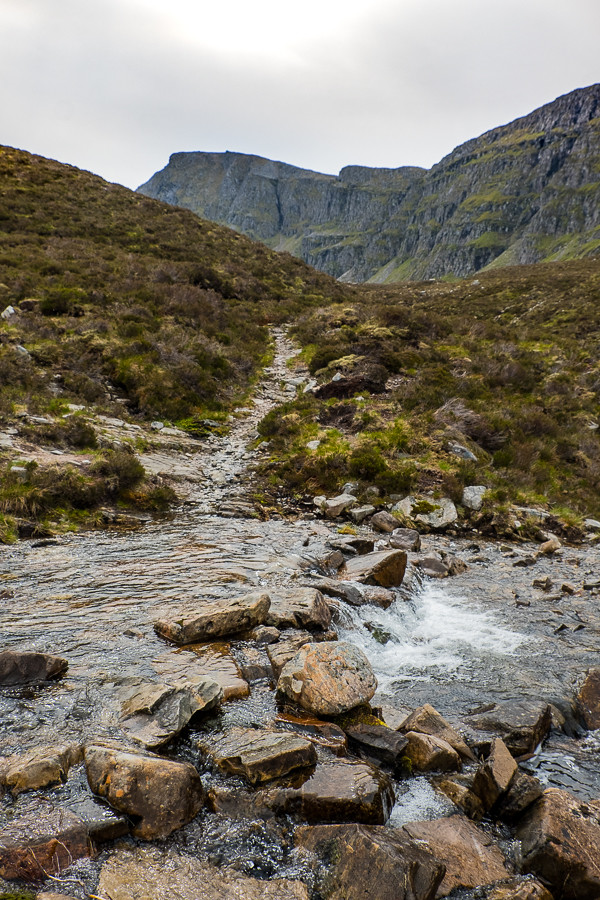 Maisie shows how it's done: 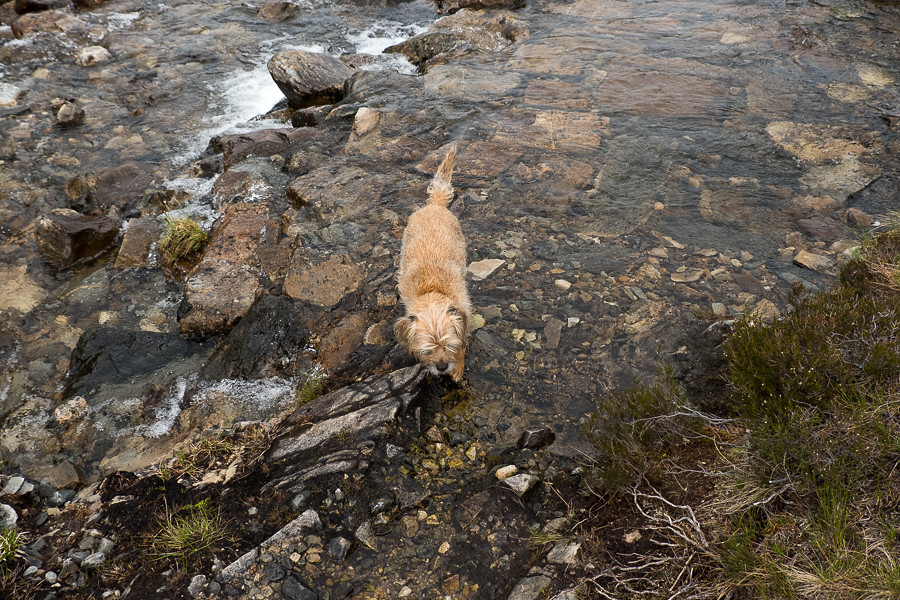 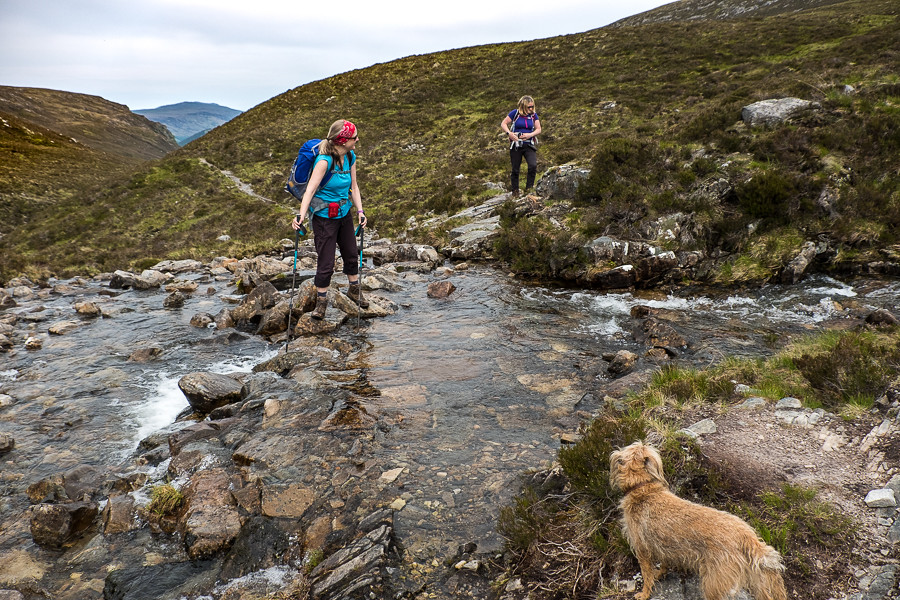 Lochan Lathail, on the way up to the bealach, the path zig-zags the slopes beyond: 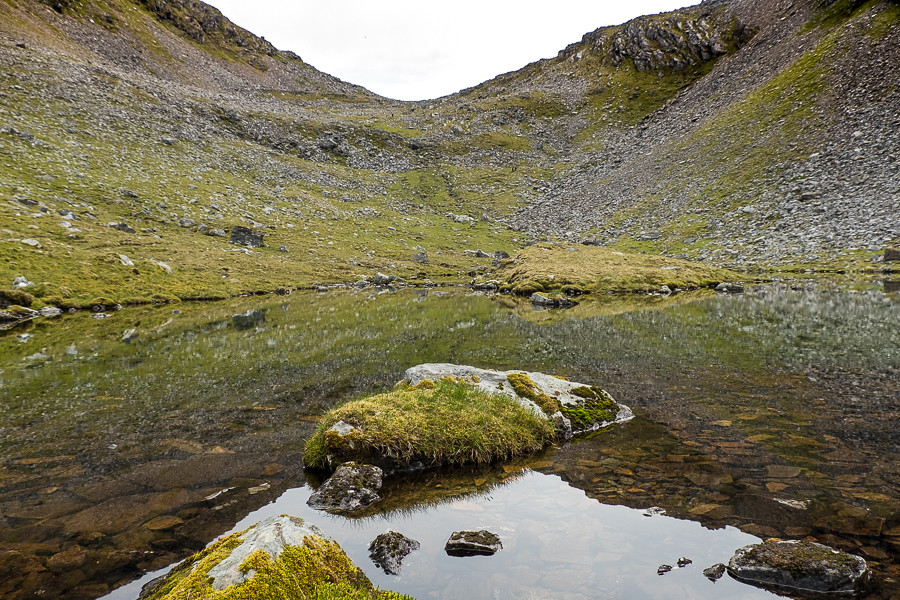 Heather upsetting the dog by pointing out we still had a way to go. You can just see the destitution wall at the top of the slope. 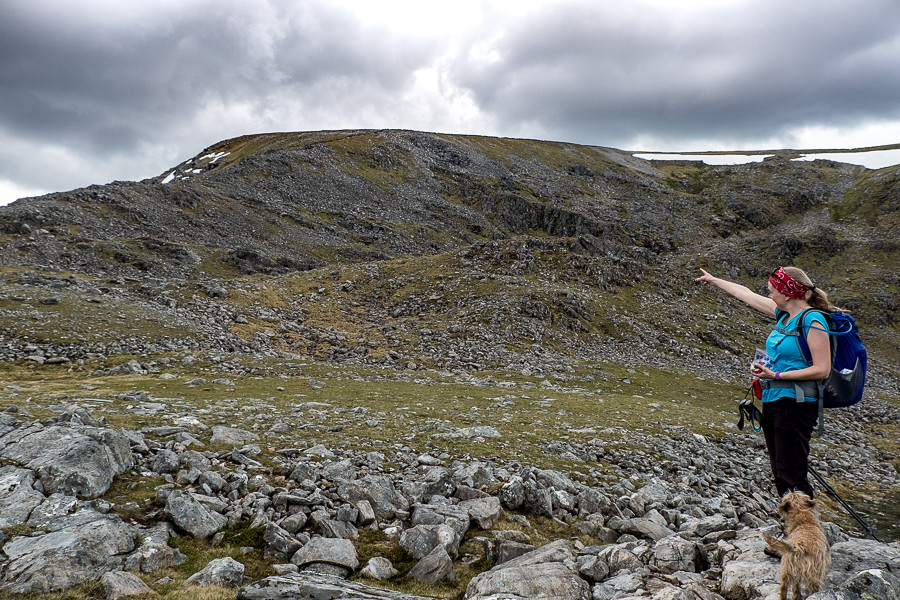 Nearing the top of Beinn Dearg now, following the wall. 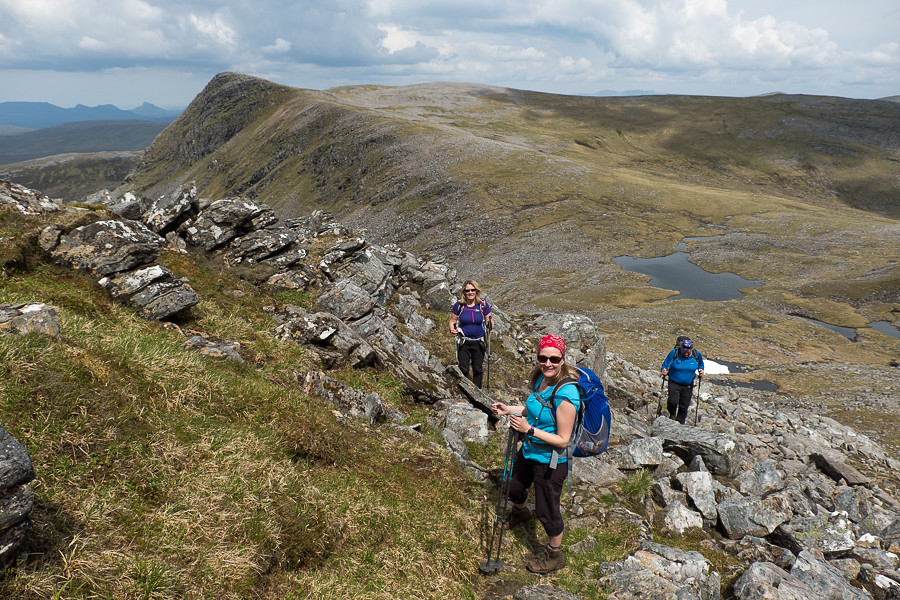 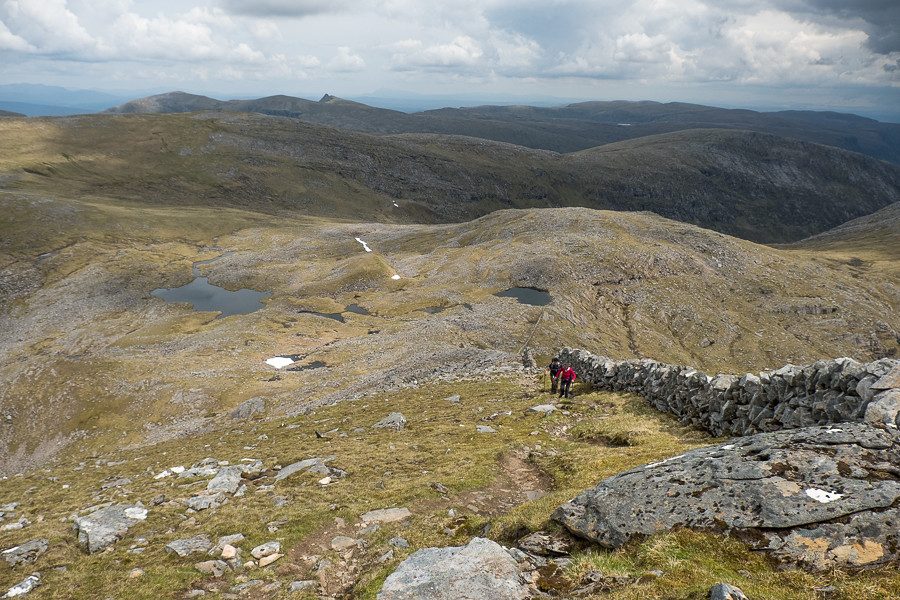 Seanna Braigh in the distance (according to Bod), with Ben Klibreck in the very far distance: 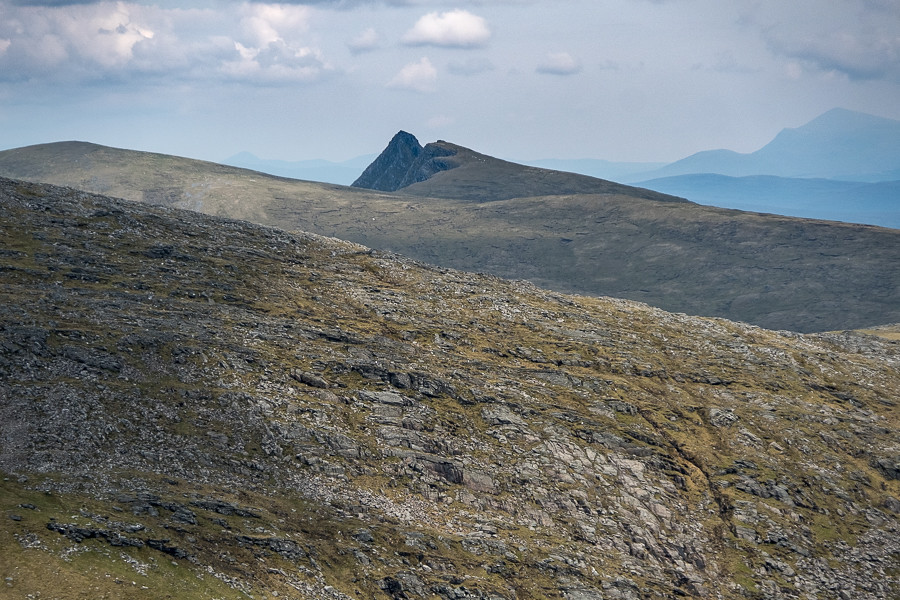 One man and his dog on the summit of Beinn Dearg: 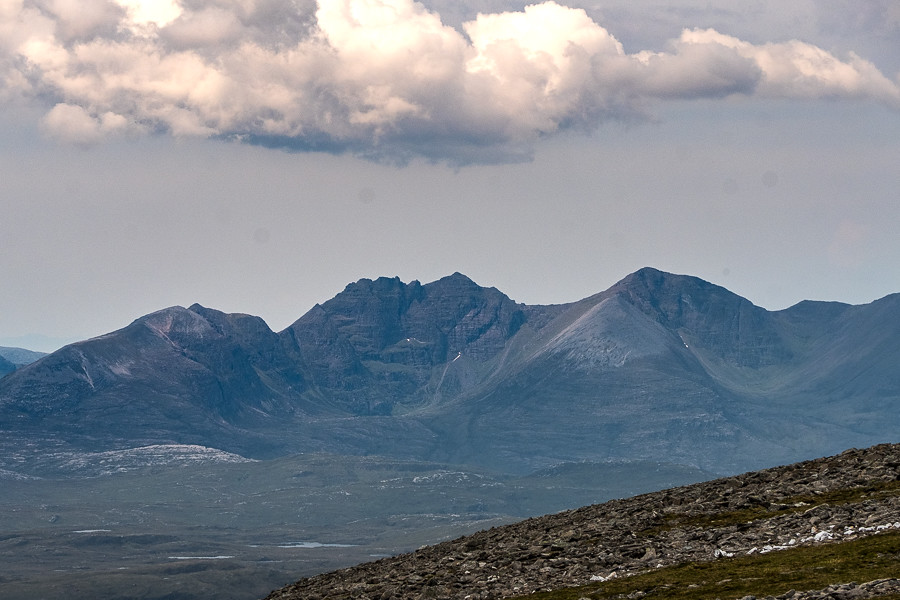 After hanging about on the first Munro, it was time to head off to the second one, Cona Mheall, for a very important event.
Cona Mheall from the slopes of Beinn Dearg, there is a sort of path which heads to the right to avoid the worst of the boulder fields, before turning up the summit ridge: 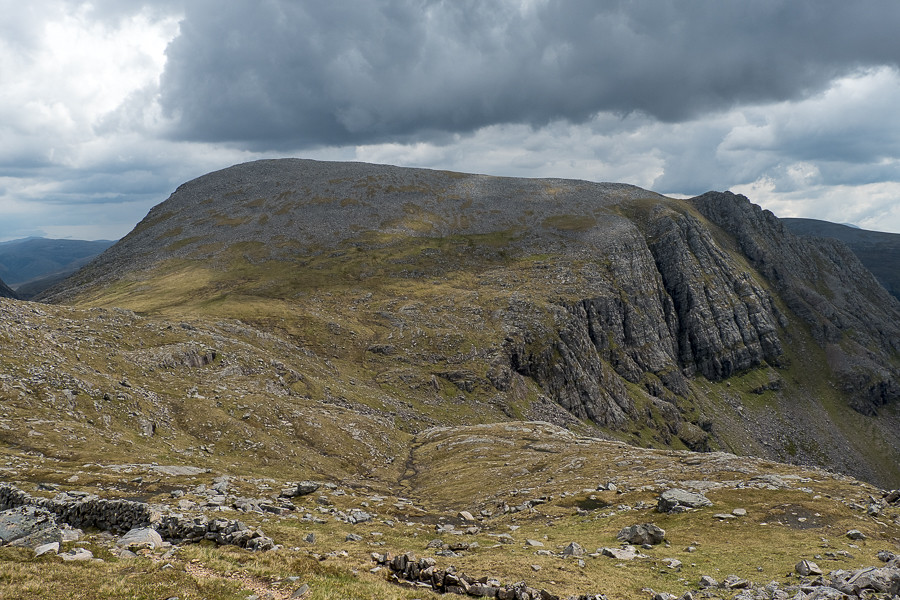 Between the first two Munros you get this wonderful view down into Choire Ghranda, with it's loch:

And then when you get to the summit of Con Mheall you get this view popping up in front of you, so many congratulations to Quincy/Heather on her 100.

Heather tells me that her ambition was just to do 100 Munros; I have a sneaking suspicion her next ambition is just to do another 182 ... 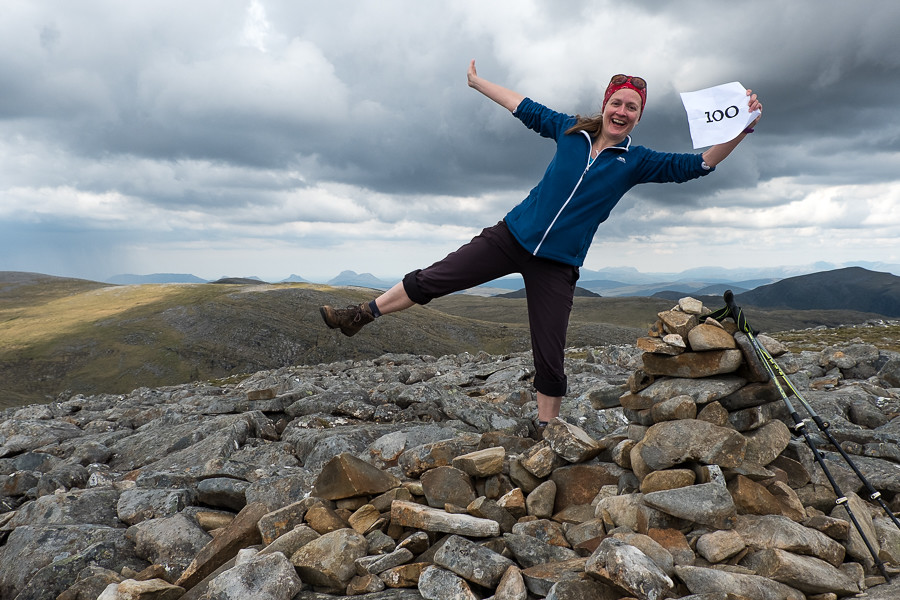 Valerie and Bod enjoying the moment. 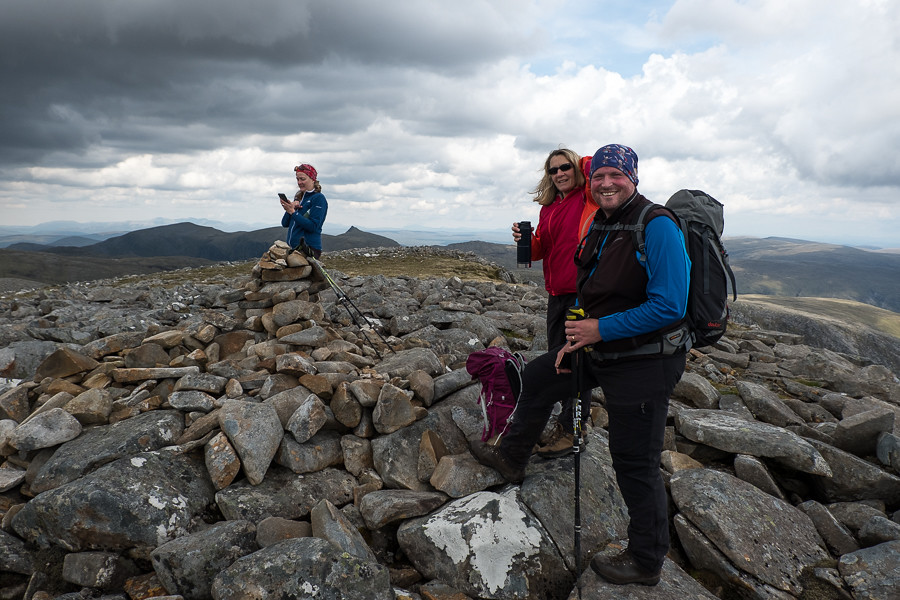 The dog was suitably indifferent: 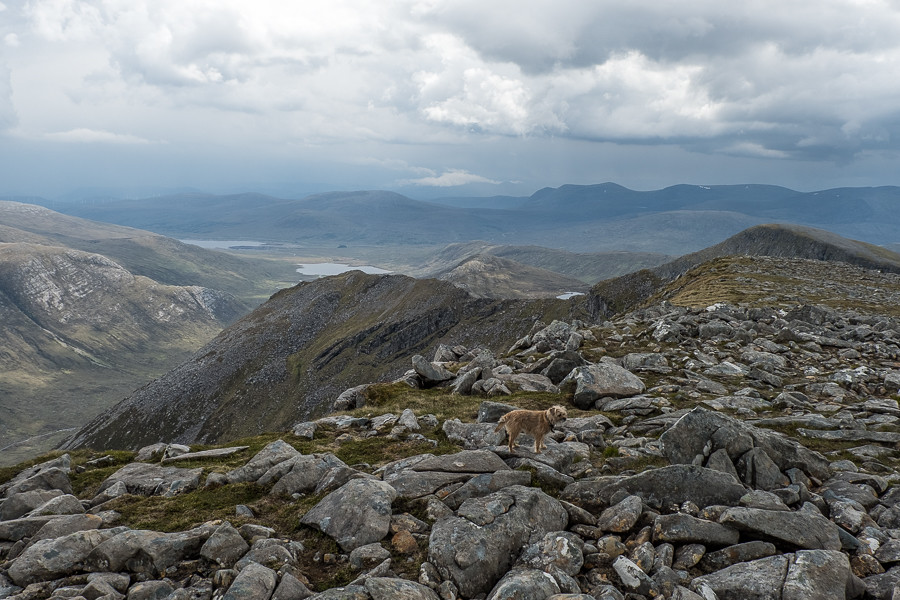 At this point the skies to the north and west were darkening and we heard distant thunder. As we got back to the Bealach for the third time, the heavens opened with rain and hail, waterproofs were donned and we climbed easy slopes to the summit of the third Munro, Meall nan Ceapraichean: 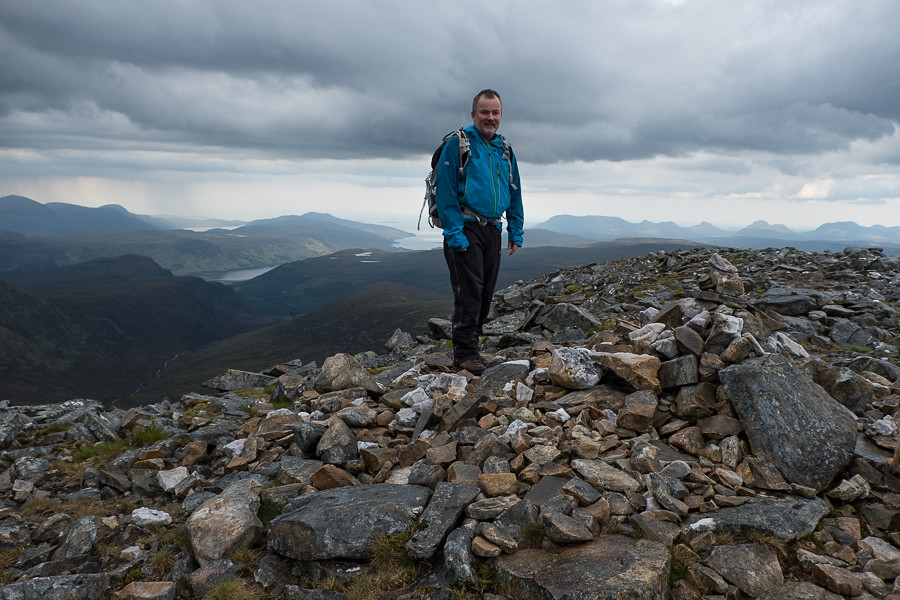 Rain sweeping in from the sea:

As quickly as it came, it went again after about half an hour, leaving us with clear views to Ullapool, and out to sea to the distant Hebrides: 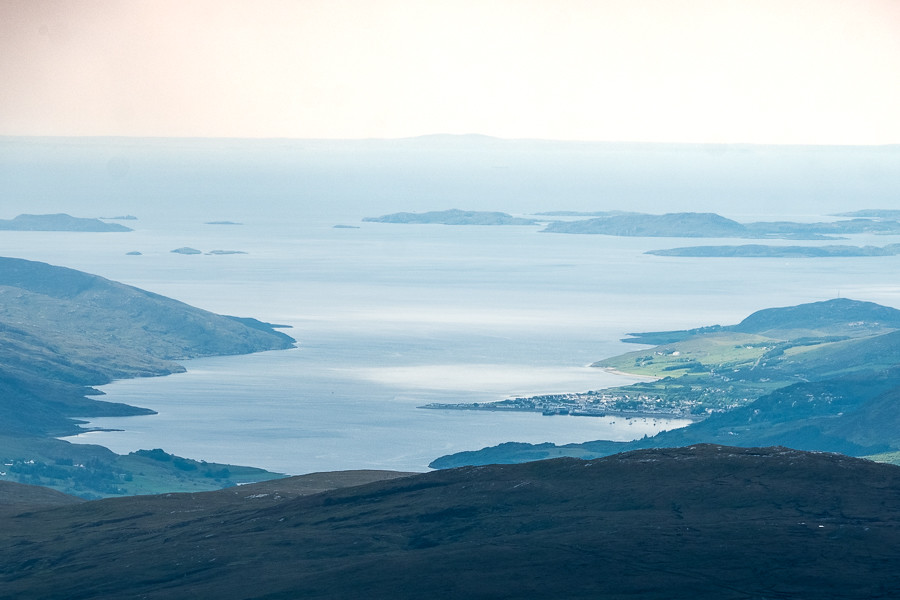 Ahead to the fourth Munro, Eididh nan Clach Geala, with the bump of Ceann Garbh (a Brian), to get over first before the descent to the bealach. 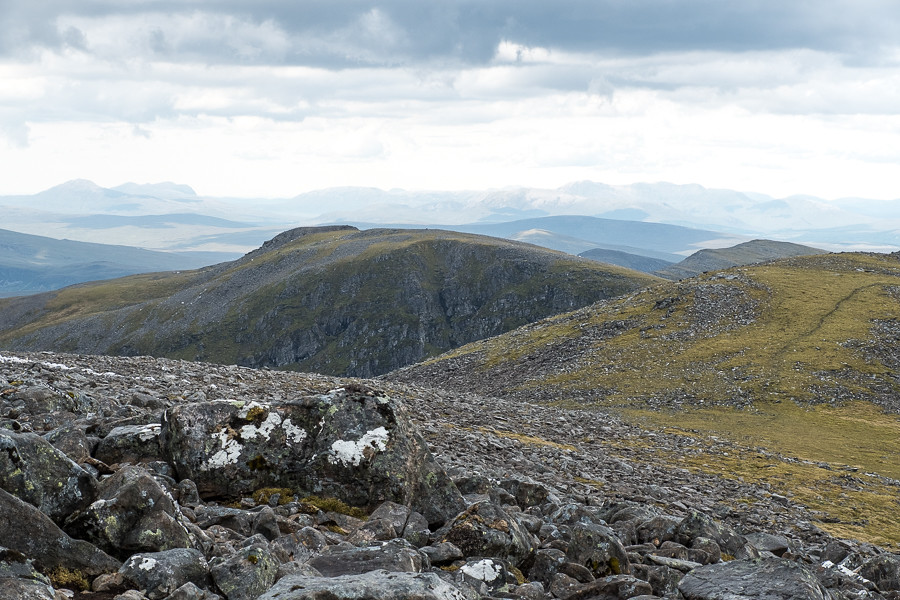 The view of the long walk out didn't fill us with the same initial enthusiasm we'd felt earlier in the day .... 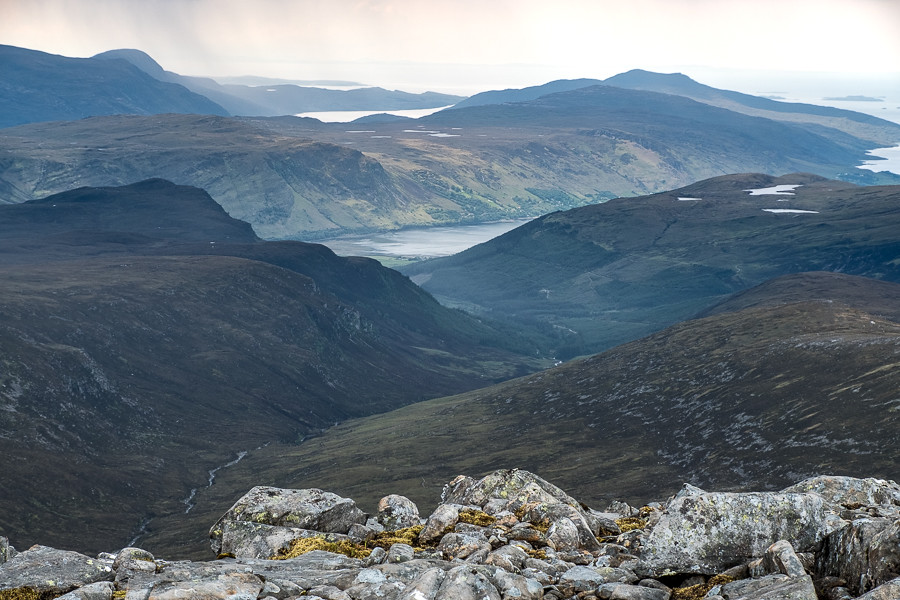 The Paramo Kids moseying off the third Munro ... 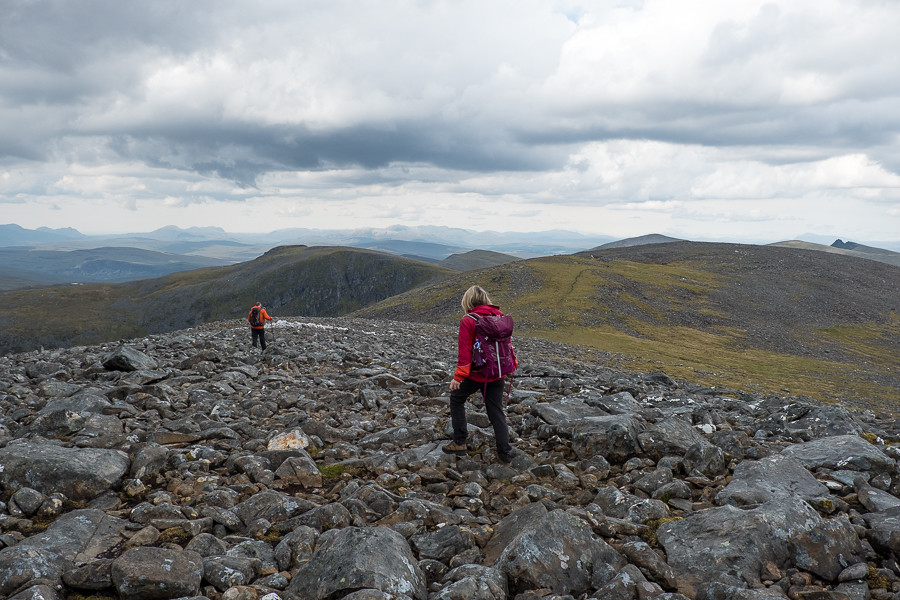 A last view back to the first two Munros of the day: 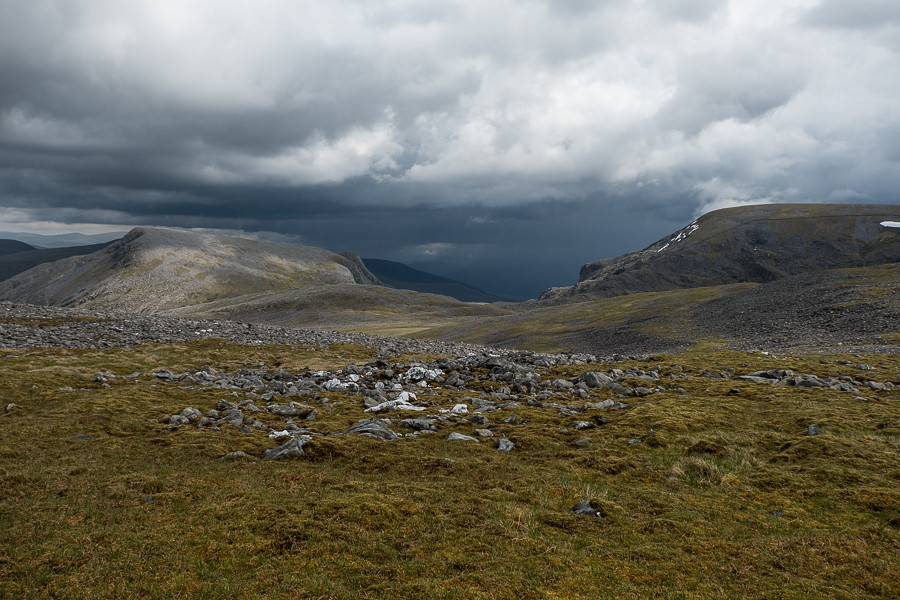 Paramo Kids making their way down to the bealach, filled with lochans: 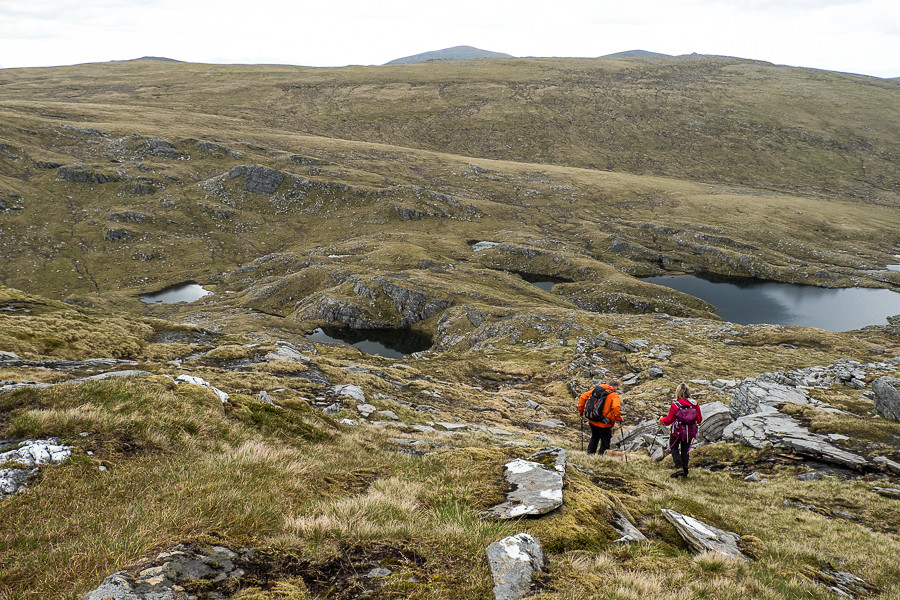 An Teallach in silhouette from the bealach: 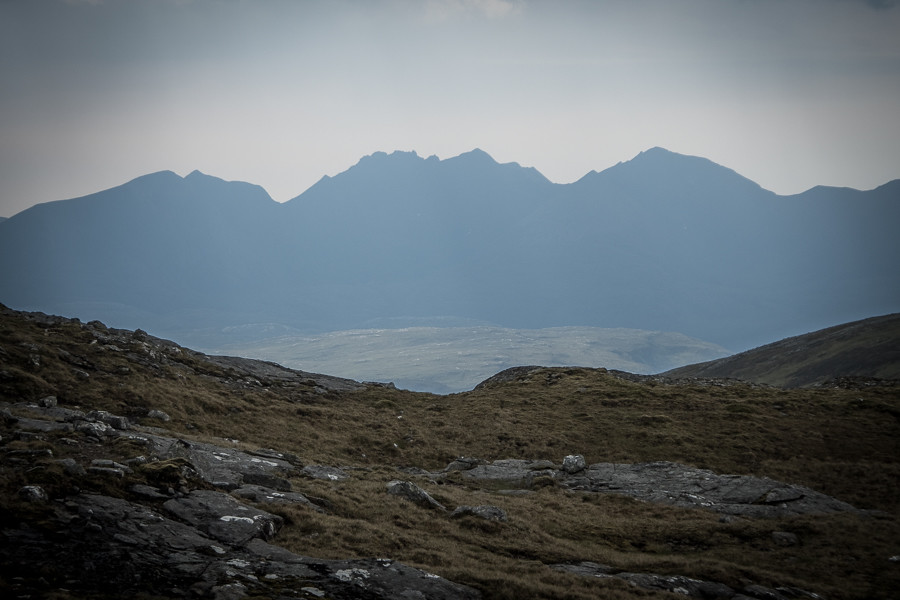 A range of emotions on reaching the summit of the fourth Munro, Heather looking tired and emotional (she had done three Munros the previous day to be fair), Bod looking forward to a pint, and Valerie looking like she could do it all again ... 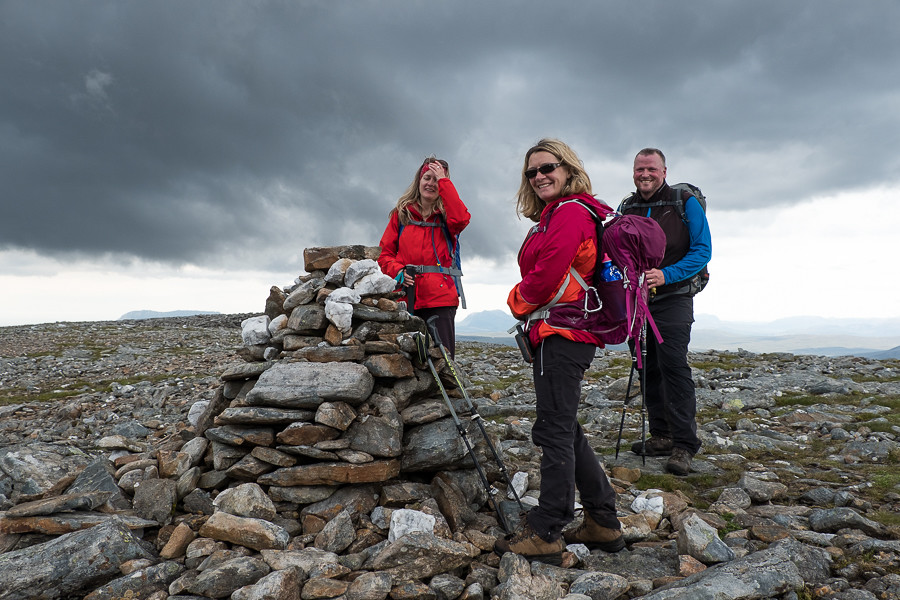 Hometime, the bar was calling. So we walked off with glorious views of the Assynt hills in front of us: 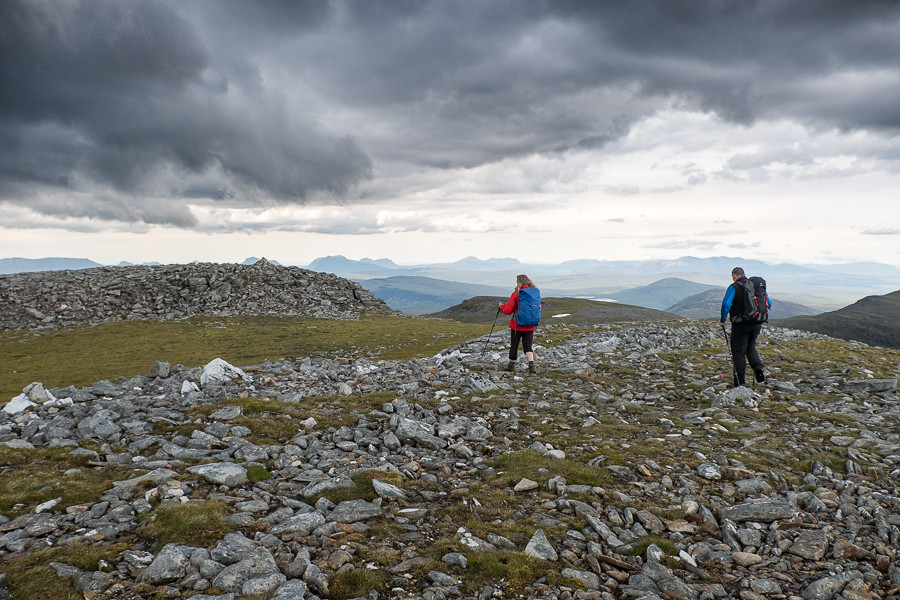 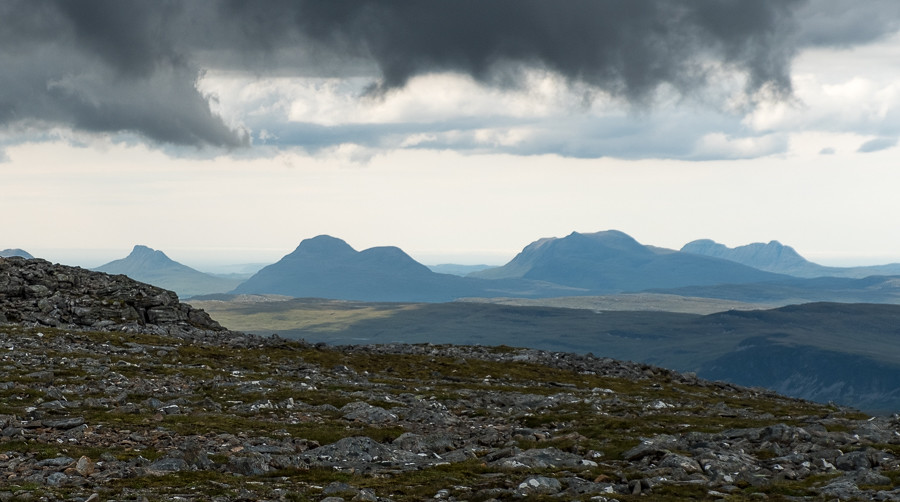 It was a long walk out. We descended by the WH route and quickly picked up the stalkers paths, but someone had been along in the day and stuck an extra couple of kilometres on them.
All in all a wonderful hill day with the very best of company, pottering along, talking nonsense and adding hours of blether time onto the total.
But we made it to the pub.
And toasted Heather's milestone.
THE END.

A wonderful day, one that we'll always remember with great fondness. Great conditions and special company sharing the joys of mountains

Great report and photos. It was so lovely to have you all to share my 100 even wee Maisie.

Looks like I missed out on a grand day, hopefully I manage next time

"All in all a wonderful hill day with the very best of company, pottering along, talking nonsense and adding hours of blether time onto the total."

That's just what I was thinking as I approached the end of the report.

Did these 4 on a very wet day on way to the infamous Inchnadamph meet, did not see a single thing all day. Some great views missed going by your photos

As someone said to me a while back
"Hail Centurion

and many congratulations to Heather

Coop wrote:As someone said to me a while back
"Hail Centurion

Here's one of the comments from my #100 report