Following a great day out on Beinn a’Ghlo (and a good bank holiday Sunday evening watching the darts in the pub in Blair Atholl), we were trying to think of what may be possible in winter on our drive to Ballater where we would be staying from Monday night. Having done three repeats on Sunday I was keen to get a new munro to take me nearer to the finishing line but knew that most of my remaining hills were quite serious undertakings at this time of year.

After spending many hours at home the week before deciding that Carn Bhac and Beinn Iutharn Mhor would be too far at this time of year together, I looked at the possibility of pairing Beinn Iutharn Mhor with Carn an Righ. As we would be driving round via Spittal of Glenshee anyway it seemed to make sense to go for it. We left the Spittal at 8.30am in reasonable weather despite a varying cloud base and headed along the track towards the Dalmunzie Hotel. I can't say I was feeling confident of success and had decided that if Beinn Iutharn Mhor was too far at least I could repeat Glas Tulaichean and Dan would get a new one. The track was frozen solid which made walking at times quite frustrating as normally we would 'bomb it' up a track. But once we found our groove and shook off the slight fatigue from the previous days endeavours we started to motor. At the hotel we turned off up the track alongside the Allt Glinn Thaitneich along which a good old sing song was required. This consisted of various Leeds United and Aston Villa chants, and more randomly things including various 'darts anthems' which are used for player walk ons. Our favourite seemed to be 'na na na na Vincent van der Voort'

As this provided quite good entertainment for a while the lower slopes of Beinn Iutharn Mhor soon came into view. Despite it looking like quite a long way we decided we were going quite well after checking the time. Soon we reached the Allt Easgaidh and headed West for a short while up quite steep slopes after strapping on the spikes. This was fairly easy going on the crunchy snow.

The mist was at about 600m and the wind was blowing quite hard. After a very short discussion about what to do we decided we were going after Beinn Iutharn Mhor and maybe even might think about getting Glas Tulaichean as well as Carn an Righ. Mam nan Carn provided a bit of a challenge as the old pink map we were using was soggy and falling apart and holding it together in the wind was making life virtually impossible for our bearings in the mist. As darts seemed to be a key theme for the day I decided to do my Raymond van Barneveld impression on the top of Mam nan Carn. I would have stuffed my jumper up my jacket to make it more realistic had it not been for the fact I would have frozen. 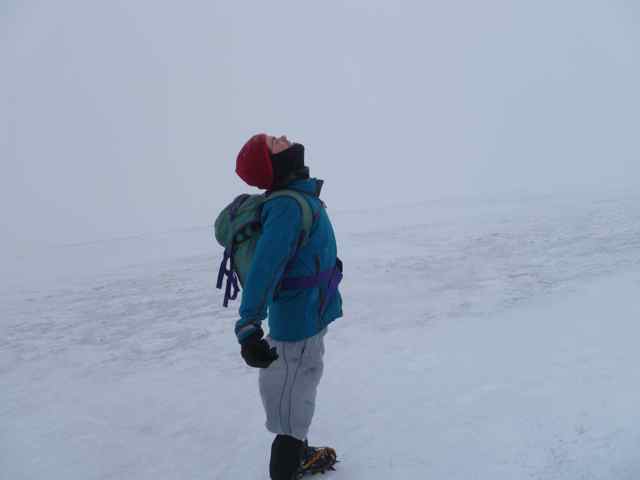 The walk to the summit seemed to be a bit of a slog which we weren’t expecting but the feeling to reach the summit of Beinn Iutharn Mhor, three and a half hours after leaving the car, was wonderful.

I had by now decided I was going for Carn an Righ no matter what the time was. I knew we had the headtorches in the bag so we couldn’t get in to too much trouble. We headed quickly down South before heading West to the lower slopes of Carn an Righ. After a quick refuel and a photo with the Morrisons value bitter which we bought and have kept for two years (a lucky charm which goes up every munro nowadays), we headed straight up the steep slopes above us. The 350m climb up the steep East face seemed to be never ending, especially as we couldn’t see anything but eventually we got there and I had decided my work for the day was done. Unfortunately for me, Dan ‘the machine’ Jones (‘machine refers to his extreme speed uphill) had other ideas and had his mind on doing Glas Tulaichean as well. As it was only two o’clock I agreed to it. Navigation at this point seemed difficult as when we descended quickly out of the cloud everything seemed to look the same. Struggling to find exactly where we were on the ruined mush of a map, I was incredibly annoyed with myself for ending back down where we had ascended Carn an Righ.

By now time was starting to run out for the attempt of Glas Tulaichean. We had agreed earlier in the day that if we were at the bottom of it by 3pm we would ascend. As it was pushing 2.30pm by now and I had slowed as a result out of frustration at my compass bearing, our chances of success weren’t looking great. But as it would soon be getting dark and we had a long way to go anyway we decided to pick up the pace and march around the side of the arm of Mam nan Carn into Gleann Mor. Surprisingly this took fifteen minutes and as it was only 2.45, the conference into what we should do didn’t take very long. Looking at the map I decided it was probably quicker to return over the top of Glas Tulaichean anyway.

Temporarily re-energized by a few frozen Jelly Babies, we seemed to make good progress up the North slopes. As we approached the higher slopes however we both seemed to suddenly hit a brick wall. Dan was on his knees for the first time ever and my head was dropping as the light dimmed. I was sure I could see never-ending hillside rising into the mist above us but literally as I said in an exasperated tone to Dan, ‘look how far it is up there’, we found the trig point about 5 yards ahead. To say we were broken men would be an understatement. But the feeling was mixed with an unbelievable sense of what we had managed in a few hours at this time of year. 'The machine' was now Dan 'Broken Man' Jones. 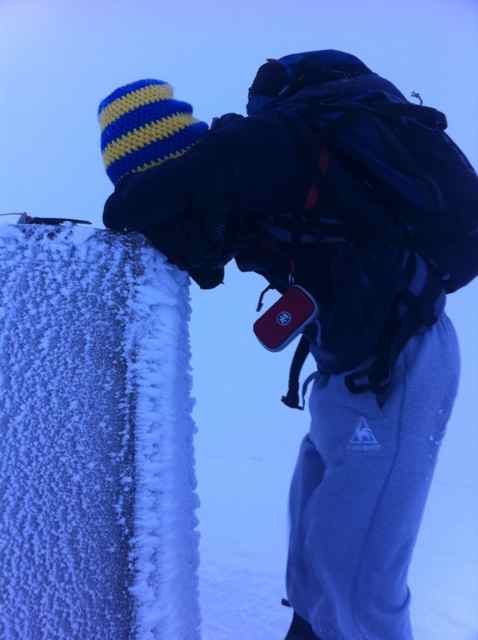 After pulling ourselves together I took our bearing and we headed for Glenlochsie Lodge. After my earlier disaster with the compass I was nervy all the way down as it was now 3.30pm and the mist was getting darker. I wanted to be on the track by dark. Despite not looking very far on the map the Glen Lochsie Burn seemed to go on forever before reaching the lodge. Maybe it was my state of mind. I finally relaxed when we reached the derelict lodge where it was now time to get the torches out and head back to the car along the frozen track past the hotel. The track seemed to go on forever and I kept saying to Dan that there were no lights so we couldn’t possibly be anywhere near the car.

After an hour or so we finally saw life at the Spittal. At 5.35pm we were finally able to get the gear off and jump in the car to Ballater. Despite not seeing anything all day and being very tired and broken, it was one of the most wonderful days in the hills I have ever had.

Having had a memorable experience doing these hills myself (albeit in very different conditions and from the other side), reports on them will always grab my attention and make me sit up and take notice. Wouldn't normally expect to see a Darts clip in them mind you! Interesting twist....

When I noticed the date, I saw it was the same day that CurlyWurly and myself were up on nearby Carn Bhac. I did kind of think I could hear some muffled terracing chants coming from the general direction of Beinn Iutharn Mhor.

. Sounds like you both had a great time as well

Great report Ketzter,
Love the photos. Quite a contrast to the hot blazing sun I had in the summer when i done a very similar round (the reverse of yours almost). No wonder you were knackered. I remember going down Glas Tulaichean 's north west slope and thinking it was quite steep at the time.

Well done in the conditions.

I've also done the reverse of this in the summer, and although it was a bit wet, navigation was easy at least!

Don't blame you for being worried about descending the wrong way off Glas Tulaichean. I did this on another occasion as I hadn't bothered to take a bearing. We ended up going down the SW ridge and having to walk the entire length of the Lochsie Burn - very wet, boggy and tedious if you didn't plan it. Possibly one of my worst days out on the hills

Thanks for posting your link Monty to your report. It's nice to actually be able to see what our route looks like!