An attempt at Ben Lomond via public transport

An attempt at Ben Lomond via public transport


After a foiled first attempt at Ben Lomond several years ago, I really wanted to try it again on my most recent trip. Alas, I had no car, and also no particular desire to walk to Rowardennan from either Balmaha or Inversnaid. However, a careful look at the train timetable from Glasgow, as well as the Loch Lomond Cruises schedule, suggested it was possible without a car. However, I would have only seven hours to get up and back down the hill. Challenge accepted!

I got up very early in the morning on 8 May to catch the 5:20am train from Glasgow Queen Street to Arrochar & Tarbet. Then I loitered near the Tarbet pier for two hours until it was time for the boat across the loch to Rowardennan. It was so early in the morning that nothing was open for business yet, so I explored the area right around the pier. I'm unsure if the camping management zone encompasses the western shore of Loch Lomond, but I did see evidence of no fewer than three campfires, one of which appeared to have been lit in a hollow tree. I drifted back to the pier and paced to try and keep warm - it was a cold morning, made even colder by a bracing wind coming off the loch. Every now and then I gazed across the loch at Ben Lomond with some trepidation. 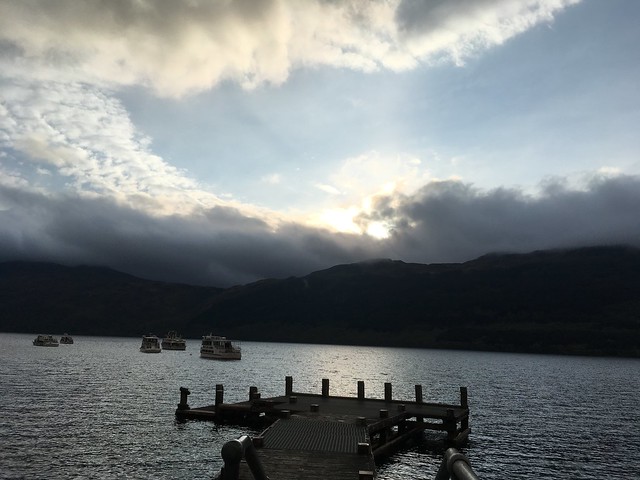 At last it was 8:45 and time for the boat. Ten or so of us boarded. Almost everyone was dressed for hillwalking, so it seemed we all had the same idea: Climb Ben Lomond and be back down in time for the return journey to Tarbet. We landed at Rowardennan and everyone took off - some toward Ptarmigan Ridge, some (including me) toward the tourist path. On the lower slopes of Ben Lomond, the wind was calmer and I made good progress. The path up was mostly as I remembered it from my first attempt: rough underfoot in places but manageable, with gentler sections interspersing the steeper sections at convenient intervals. 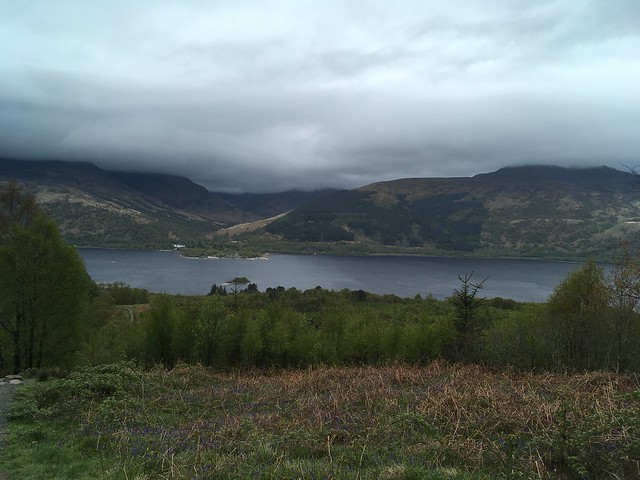 Mindful that I needed to be back at the SYHA hostel pier by 4:45pm and that it would almost certainly take me longer to come down than to go up, I decided to climb for three hours and then assess where I was and how much further I had to go. 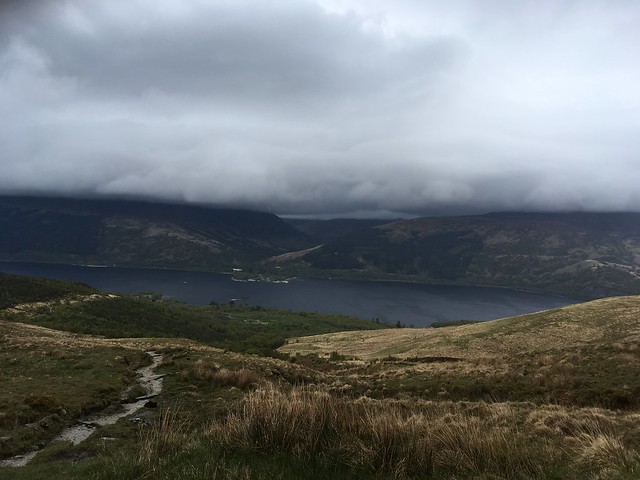 The problem with this plan became obvious when I reached cloud level. Once I was up in the clouds, I could no longer see further than about 10 meters ahead of me, and I couldn't see above me at all. Lacking a GPS, I had no way to judge how far I was from the top. Additionally, as I gained elevation, the temperature dropped and the wind strengthened. Eventually I was struggling through gale-force winds.

Then I reached snow level, which came as a surprise - the upper reaches of the hill had been out of view due to the clag, so I had no idea there was snow at the top until I actually got there. It was only in small patches on the grass beside the trail, but I had no winter equipment with me, and its mere presence meant that the temperature was now below freezing. I tried to push on for a few more minutes, but the snow on the ground was becoming more and more present, the wind was getting even stronger, and my hands - gloveless, and exposed to grip my poles - were really beginning to suffer.

Then I met a guy coming down from the top, who told me I probably had about 40 minutes of climbing left. I looked at my watch - it was not quite noon, and I wanted to have a full four hours to get back down. 40 minutes would be cutting it too close for my comfort in these conditions, and the wind and cold were likely to get worse the higher I got. So I turned around.

I inched my way downward through the wind and cloud. My hands were absolutely red and burning, but I took comfort in the knowledge that the fact that they were red and burning meant they still had bloodflow. As I lost elevation, it got gradually warmer and less windy and normal feeling returned to my hands. It had evidently been raining below cloud level and the rocks I had climbed earlier were now wet, but I successfully negotiated them with only a little bum-slithering.
I reached the bottom a little after 3pm. If I had tried for the summit I would've had to run for the boat. As it was, I had time to shuffle into the Clansman for a baked potato and a pot of tea.

We were a cold, wet, and tired group at the hostel jetty. Some people who had been on the boat that morning made it to the top, others, like me, didn't. A Canadian woman who'd made it up showed me her photos of the summit, and it was under at least six inches of snow, with horizontal icicles clinging cartoonishly to the trig point. I was now secure in the knowledge that I'd done the right thing by turning around.

Eventually the time came to trudge back up the road to Arrochar & Tarbet station for the 8:06pm train. When I got there I still had about 20 minutes before the train was due, so I settled under the platform shelter to wait. And I realized that for the first time all day, the wind was gone. The evening was still. Birds chirped in the trees, settling in for the night. I could smell woodsmoke from a neighboring house. What had been a cold and endurance-testing day was turning into that peculiarly Scottish late-spring evening that is full of promise, as if the world is taking deep, centering breaths in preparation for something unknown and exciting.

In conclusion, I am now 0 for 2 on Ben Lomond attempts.

If I ever make a third attempt, I think the thing to do is remove the time pressure by booking a night or two in Rowardennan. And also invest in some winter gloves.

Although part of me is wondering whether this is a sign that I need to stick to long-distance paths and leave the hill-climbing to other people?

Re: An attempt at Ben Lomond via public transport

LaurenAlexandraAgain wrote:Although part of me is wondering whether this is a sign that I need to stick to long-distance paths and leave the hill-climbing to other people?

I think of long-distance routes as harder than most hills - longer distances per day and a bigger pack.

My one attempt at a long distance walk (Dales Way) ended ignominiously after Day 1 due to blisters, which I have never had on the hills!

So you are clearly fit enough to do the hills - but a combination of bad weather, bad luck and most of all a lack of gloves was the problem.

There are many Munros that can be reached by public transport (especially round Crianlarich/Tyndrum) but the best advantage of hiring a car is the freedom. You can look at the weather and decide where to go - in my experience it is often rain in the west, sunshine in the east - but quite often too it is the other way around!