Corbetts included on this walk: Corserine, Merrick, Shalloch on Minnoch


First off, I am delighted to have a reason to be able to write a blog again, it’s been a long time since ive been able to achieve something that merits it in my own mind. I wrote this blog out fully on friday then had a systems crash and lost it all, I was very happy with it then and hopefully i can do it the same justice again now.
I decided just a month or so beforehand by looking at my annual leave, the time of year for daylight hours, the type of challenge it was and the area where the challenge would be made it perfect to try. The galloway forest ring of fire, a circular peak bagging route of 30 peaks, around 44 miles with 14,000ft +/- on it and to complete within 24hrs would give me something to get my teeth stuck into. I’ve always loved the Galloway Forest and rant about it a lot, it’s a major unappreciated part of the country and often overlooked for the much more popular locations such as up north in scotland or down south in the lake district etc. It keeps the galloway forest quiet and adds to its remote and wild nature though which I should be thankful for, it’s the best. The 30 peaks on the challenge, 3 are corbett height (above 2,500ft) 21 are donalds (above 2,000ft) and the rest are below 2,000ft but all above 1,500ft. What this route lacks on the perceived big hills making many overlook them particularly your average munro bagger, it more than makes up for with its often pathless, overgrown, boggy, treacherous terrain….its a real beast and not for the faint hearted. I’ve not been running a lot recently compared to my norm, due to lingering injuries that I don’t know if il ever properly get over, its breaking my heart more often that not these days the old running. Although since the start of the year ive been doing alot of hill walking, my fitness is good for the hills just now and ive had a few big days out, muscle memory for the hills definitely returning. I knew this challenge was achievable if everything went right on the day and my head stayed strong for the inevitable tough times. I couldn’t wait to get started. I should note that this is a relative local area for me, i live in ayrshire and most of the route is in dumfries and galloway with some areas in north sections in ayrshire, the starting point of the route is an hour away and from my flat on a good day i get an awesome view of the ‘awful hand range’ the last ridge line id be on during this challenge and with 3 out of 4 of the biggest peaks on it of shalloch on minnoch (highest in ayrshire), Kirriereoch and the mighty Merrick.

Tuesday the 18th on June 2019 was the day, I had a couple of dates to play with but this looked potentially the best weather wise. I had been up the corserine on the monday which is the 13th peak on the route to stash 4.5L of fluids and munchies to replenish my supplies on the trip and the weather was brutal…could it be such a big turn around today? I woke up at 0820 which was my long lie, must be a mixure of fecked up routein through shift work and getting old but I’m rarely in bed these days on days off after 0700. I had everything packed into my chest rig and drybags the night before and ready to go so it made for a chilled morning, I aimed to be starting sometime around 1100-1200. I had my porridge and watched some stuff on youtube, Rocky 4 training footage, you better believe it!! I pictured shouting DRAGO!!!! At the top of the merrick sometime the next day. I was in good spirits, I was about to tackle something big, the sun was shining, I felt jovial and I felt the excitement, something similar to the run up to my first west highland way race i would say, i’ve missed this dearly. The drive to bruce’s stone at the base of the merrick takes me around an hour from my flat, i was ready to go around 0930.

I arrived at bruce’s stone car park around 1040, the sun was shining with a nice breeze which was more than welcome to keep the midge at bay, perfect!! The midge are legendary in the galloway forest usually and in particular around this area so close to the mighty loch trool. I was ready to go, a few cars in the car park most presumably there to climb the merrick, the highest peak in the area and southern uplands in general, it is a relatively popular peak. It keeps most off the other peaks around the area, just what i was after today. Just before I started at bruce stone i managed to get a couple who were about to start the merrick to take a quick snap of me for the collection, for a good before and after photo! I had my GPX file uploaded, I hit the start button at 1055 and locked it so it couldn’t be touched again until I made it back to bruce’s stone the following day and set off. 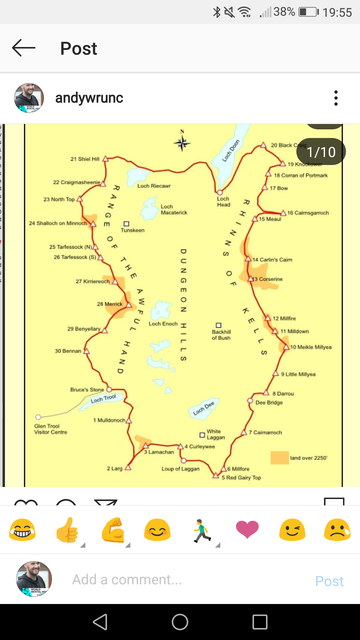 An absolute monster of a walk, congratulations.

Speaking as a major fan of the Southern Uplands including Galloway that round was awesome....well done !

Wow Andy that was unbelievable. Best report I've read in a good few months. I've done these three ridges in the past two years and the thought of combining them all is truly terrifying - I could really feel your pain about the rough terrain; some GFP spots are truly unbearable but the fact that you can get the whole ridge to yourself makes up for it. Curleywee is still probably my hardest Donald so far as I went up the 'bad' way so I can relate there, but I am most impressed on how calm you were when in the middle of dense conifers in the pitch black, I would be so scared if I had been there myself. Hopefully this round can catch on as its length, ascent and peak numbers all link up really well, although even at 23 I can't imagine attempting it - what an achievement!

Wow! What an epic trip and a great report.
Most of my walking is done in the Galloway hills and I love that I can be out all day and not see anyone. I'm used to the pathless wet terrain, tussocks and bogs but I wouldn't be brave enough to tackle some of the terrain you fought your way through!
Well done, great achievement!

Amazing achievement. The distance and ascent alone are impressive enough, but the rough, boggy and often pathless terrain make this something else. I can totally understand your tears of elation at completing it in a single day. Great that you did it just for it's own sake too. An inspiring report

An amazing walk and well done, but can I gently point out that the Black Craig that you climbed ( north of Coran of Portmark and overlooking Loch Doon) at 528m, is neither a Donald or a Graham. The Donald /Graham of Black Craig is off Glen Afton and not far from New Cumnock - if you had included that in your walk it really would have been superhuman!.

Thanks for the kind comments people, this is me just reading them. it was a great experience and highly recommended for a top challenge, the galloways are special in how remote they are, a true sense of wilderness! haha @tinto63 I did notice this after I wrote the report and tagged the hills, that blackcraig would have taken me a little off track

Outstanding Andy.
A lot of pathless wet terrain down there to contend with
Never had a Mexican stand off with a couple of horses before

cracking effort i really like the look of this for the summer of next year, you don't happen to have a gpx file of the route?