Not the Lochaber Traverse Mk2, Laggan 3

Not the Lochaber Traverse Mk2, Laggan 3


Here we are with a fortnight's holiday from work (hurrah). We spent the past several weeks packing up the house and putting most of our household goods into storage so that the place can be rewired while we are away. This was as you might imagine quite stressful and we were looking forward to a beautiful high level ridge with wall to wall sunshine and a couple of high camps to get away from it all. But of course the weather had other plans and before we left it was clear we were going to have a week of mixed weather and low cloud. It was nowhere near as bad as in 2017 when we had shelved plans for the Lochaber Traverse in favour of bog-trotting in the Monadhliath. We had a date on Saturday morning at Glasgow airport to pick up my childhood friend from Germany for a week in Islay with my mum. So we planned a nice gentle itinerary not too far north.
We set off from Yorkshire on Monday to stay at my sister's house in the borders. She was away but my niece was house sitting with her 12 week old baby (what a cutie) so I was able to be helpful floor-walking so mummy could get a bath.
Anyway, I digress, on with the TR.
We parked at Laggan Bridge about 5.30pm after the obligatory Real Food café tea, and walked along the track to Lochan na h-Earba where we planned to camp. This is a good track and an easy walk with only 100m of climb on 5.5km of track, with extensive views over open country. We couldn't see any tops, but it was a grand way to spend an evening. Looking up Glen Spean from the track 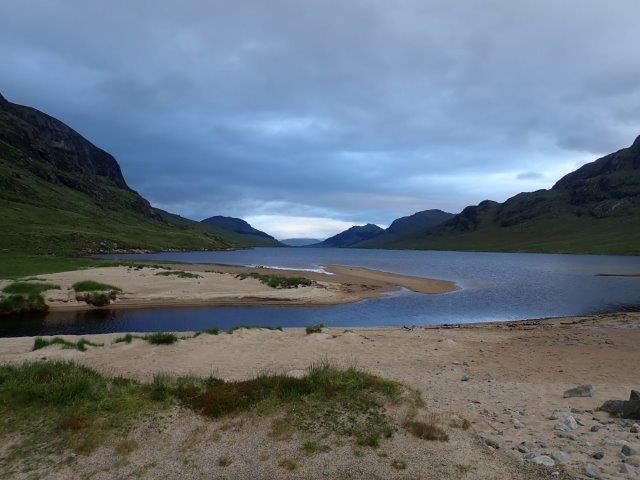 When we reached our intended camp spot we found there were already 8 tents there and we thought they might belong to a band of cadets or similar. We could hear and see them up the crags on Sgurr an t-Saighdeir. We went on past a bit and came to an old ruin at about the 360 contour mark just on the other side of the burn Allt Coire Pitridh (where I got wet feet getting across

Here there was a perfectly flat area where we pitched the tent inside the old walls. A brew and a caramel wafer later, it was time for bed. As we were messing around sorting our camp out a group of the young folks went past back to camp; some of them said hello but their adult leader at the back did not seem to notice us at all; maybe he was worrying about how much sleep he was going to get!! View from camp towards lochans. Showing off my new hat. In the morning the tops were clear of cloud but unfortunately not for long. We more or less followed the WH route tackling Beinn a'Chlachair first. There was plenty of weather, including heavy rain and cold, but fortunately no wind. Most of the route is pathless but pretty reasonable going underfoot, though with some bouldery bits at the top of Beinn a'Chlachair. Looking down Glen Spean from the track up the hill

The summit of B a'C was in clag and we didn't linger. Top of Beinn a'Chlachair with me on it Rudolph polished his pacing timing and compass skills walking eastwards along the ridge - I was far too lazy and just followed him. After doing more than 200 munros as a team, (as well as all the rest) we do work quite well together! We came out of the clag to see we had taken a nice route and were at the right point to come off the ridge on steep grass but with no real difficulty. We could see the stalkers path which comesup from Coire Pitridh and crosses the cliff on a sort of shelf above the Loch a'Bhealaich Leamhain. Crossing this path, we found a lovely sheltered spot to have a brew and some lunch. It was clearing up and the views were extensive although the clag was still covering the higher summits. Just at the edge of where we drop off the ridge, in the background Creag Pitridh and Geal Charn 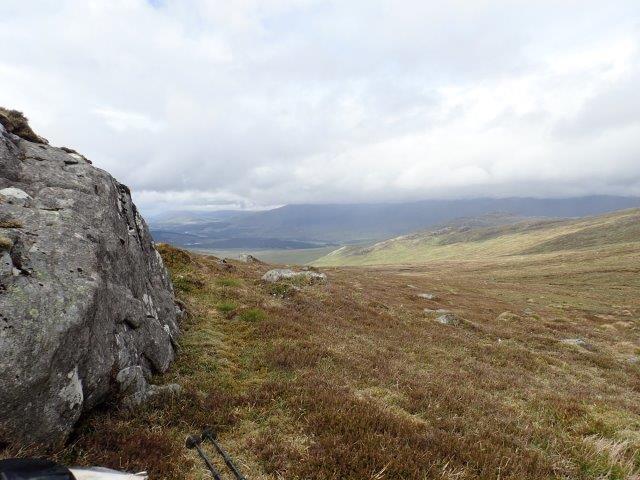 cloud still pretty low on Creag Meagaidh and her neighbours

It's a steady but straightforward climb from the bealach starting on a stalkers path and then straight up the hill to the top of Geal Charn where there is a massive cairn and a normal sized trig pillar. We took this as a cloud free summit as we could almost see the view of surrounding areas. 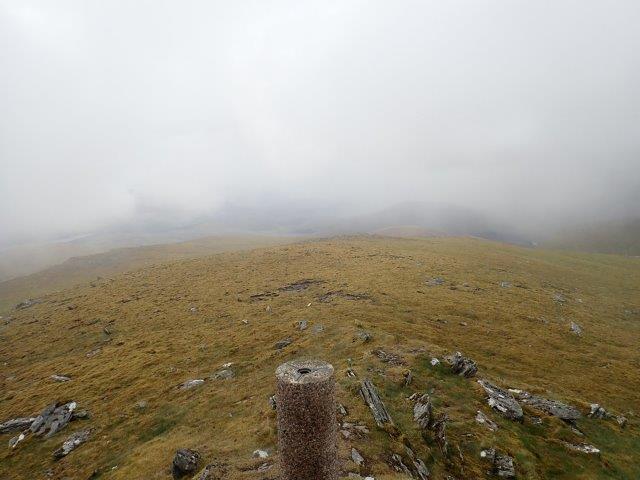 I'll take this as a clag-free summit thank you

From here we could pretty much see where we were going for the rest of the day. Looking back, the summit of Geal Charn was clear and we could see a man standing by the cairn. Only he didn't move at all and we realised it was actually the trig pillar! Looking towards Fersit hills and Grey Corries still in cloud. Looking back to Geal Charn from halfway up Creag Pitridh

The last Munro of the day was at the end of a short sharp climb of less than 100m and was easily reached. By this time it was turning into a lovely evening and the views were much clearer and more extensive, with even the summit of Creag Meagaidh becoming visible. Turning into a pleasant evening Rudolph, with the upper part of Glen Spean in the background 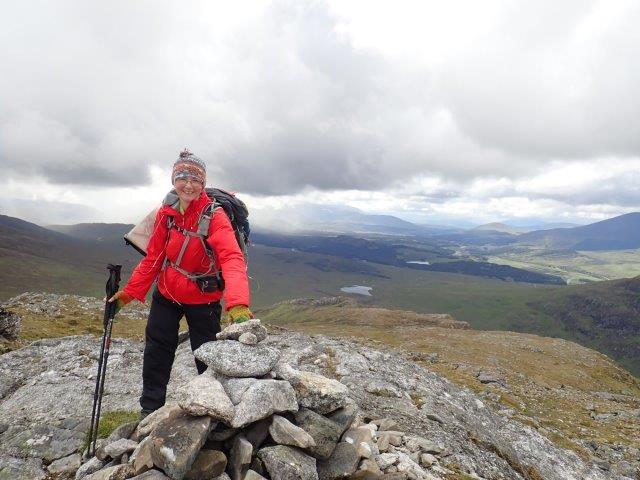 Me, and the lower part of glen Spean behind

Straight downhill down grassy slopes to the tent we took a break for a cuppa, packed up the tent and walked back to the car feeling pleased at a day which was better than we had expected. 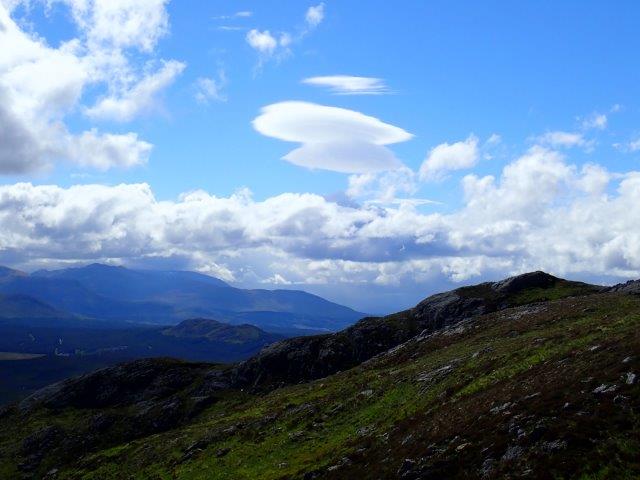 Looking back up to Creag Pitridh Back at the tent 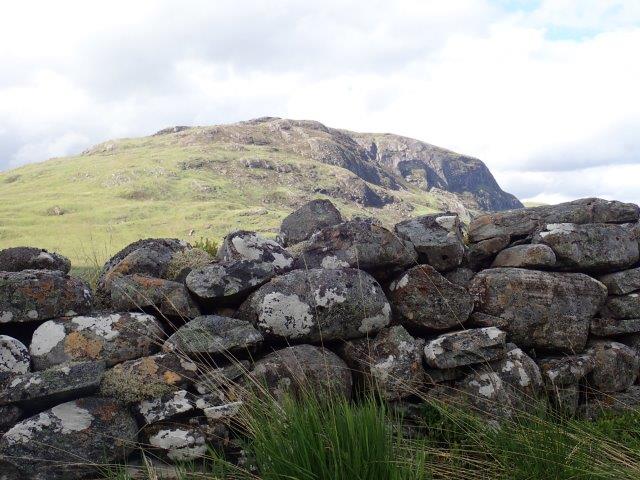