Grahams included on this walk: Beinn a'Mhanaich, Cruach an t-Sidhein


These two hills seem better done from Luss, but I got seduced by the shorter cycle from Helensburgh. It's amazing the swift contrast between suburban Helensburgh and a mile later highland Glen Fruin. Also it was odd cycling up the quiet road that was the main road up the glen when I was last on it 50 years ago. OK, you spot the path, then!

There's a path marked up to the Luss Glen from the reservoir and also on some maps, but not the OS, which in this case is right. I found myself stumbling through rough tussocks and marshy bits, doing 3 kph where I'd counted on 5. The warm sunshine was not helping either and at the watershed I abandoned thoughts of adding Doune Hill. In fact when I traversed on to the shoulder of Beinn a'Mhanaich, I looked at the descent and reascent to Cruach an-t Sidhein and thought in terms of a one hill day. It took all the force of the money I'd shelled out on a train ticket from Edinburgh to keep me going.

Cruach an-t Sidhein's a nice summit but you despair of your ability to guess Gaelic pronounciation when you press the Walkhighlands button! The camp in the foreground of the picture doesn't appear on my 2003 OS sheet - it was still a military secret then. It was turning into a beautiful warm day, not at all what I wanted for the return to Beinn a'Mhanaich. 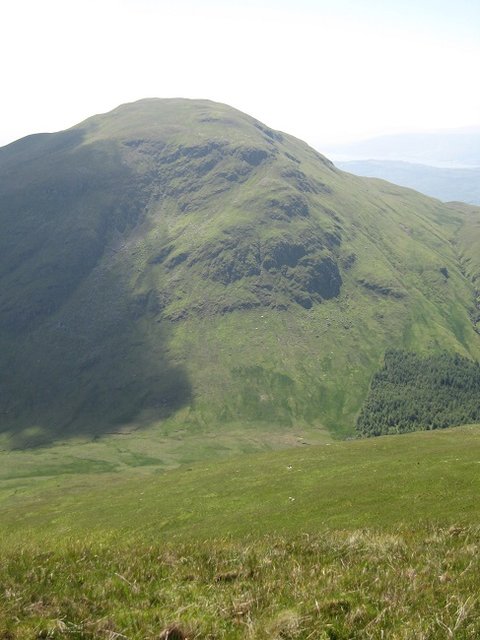 Near, but somehow far!

I went up a steepish gully then traversed on to the ridge. I made the summit an inch or two ahead of heart failure. It looked like no distance to the reservoir and my bike. In fact for the first time that day, I was on good paths and easy slopes. It's definitely a good idea in the Luss Hills to get on a ridge as soon as you can. This ridge is covered with military warning signs but I didn't care. I got back to my bike, saw a flat tyre and burst into tears. More in hope than anything else I inflated it. It stayed up! That got me five miles and one more inflation got me to the station. Couldn't be bothered with a pint in Helensburgh, I reckoned the sun would still be on the steps when I got home.