Beinn a Bheithir via the north ridge.

Beinn a Bheithir via the north ridge.

our route.gpx Open full screen  NB: Walkhighlands is not responsible for the accuracy of gpx files in users posts

I have been thinking about doing Beinn a Bheithir for quite sometime now. Two Munros separated by a col, this looked like a fairly easy day out on a cracking ridge.

Every time I looked at the route I was put off with at vast forest area that circled car park. For some reason I thought this could cause major problems in reaching the hills and bigger problems at the days end when trying to get back to the car park.

I have never came across a report of attacking Beinn a Bheithir from its north ridge. Looking at the os map, this looked like the best way to go. Gain height quickly, should get nice views of the NE ridge, Views to Sgorr Dhonuill and the snow on the ridge should be well frosted in area’s to allow good progress.

Leaving the car park we headed up the track south, crossed a small bridge then followed the track north to NN 050 586, then after turning round the bend in the track we made our way up to the North ridge. Was a bit of a struggle getting through the young forest and all the snow covered tree stumps that was left from past felling. After some time the going got much easier and the ridge was reached. 2.5 km south was Sgorr Dhearg, between Sgorr Dhearg and us was the ridge that we were going to savour and enjoy.

Sadly once on the ridge the clouds came down and the views for a while were rather poor. But when we reached about 800m you could see the sun trying its best to burn through and burn through it did. This was what we were hoping for. Never got a chance to see Sgorr Bhan 904m top as the cloud never shifted from that side, but the surrounding views over to Sgorr Dhonuill and beyond were fine to say the least. 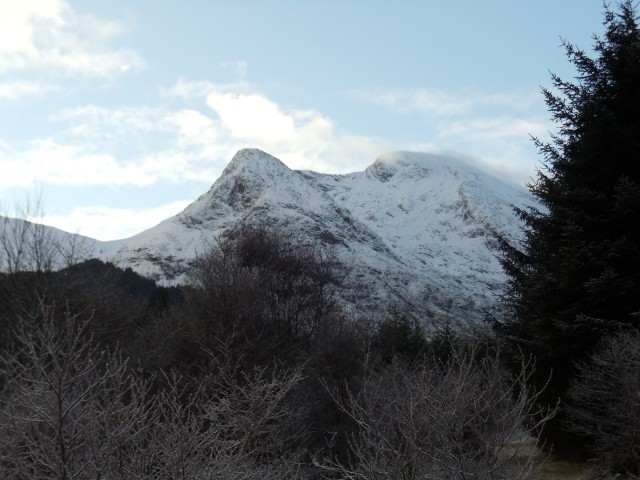 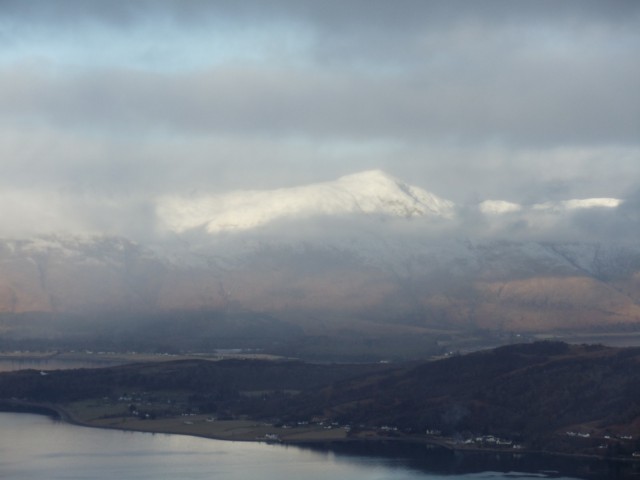 The pap of glencoe Wilson on the north ridge The north ridge we ascended

Very soon after the sun burned through we were summating Sgorr Dhearg. Although it was very cold, with a chilli wind the conditions were superb.

We decided to have some hot soup at the col, no shelter was to be found, but once we had dropped in height down to the col we managed to re-fuel up in relative comfort. 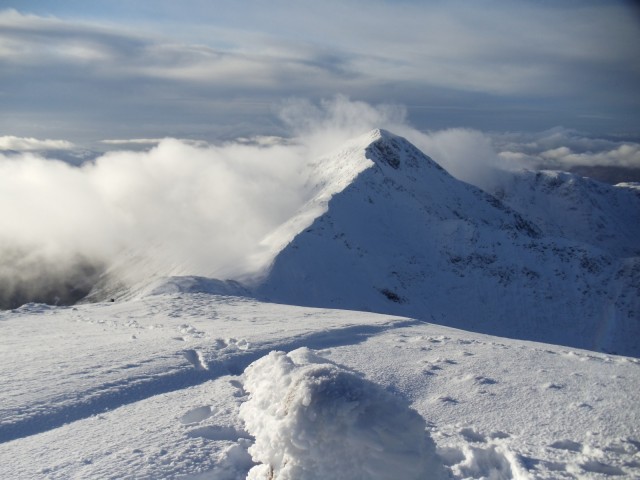 We decided to fit our crampons at the col prior to the ascent of Sgorr Dhonuill. This was a must on the steeper ground, there had been a fresh 1” 2” dump of snow recently on top of the compact snow underneath. The crampons coped admirably and we ascended the corniced ridge with no problems.


There was a real narrow part nearing the summit with steep areas throwing in just to make it that bit more interesting. Extra care was taken around this area. We just concentrated on our foot placement and tried to remember ourselves that we were wearing crampons. A slip here could easily have turned into a fall with devastating results.

I summated first with Wilson and Julie just moments behind. I think we were both on a high after that last part. We were probably slightly drained mentally with the extra concentration. Julie climbing from the col Sgorr Dhearg behind. 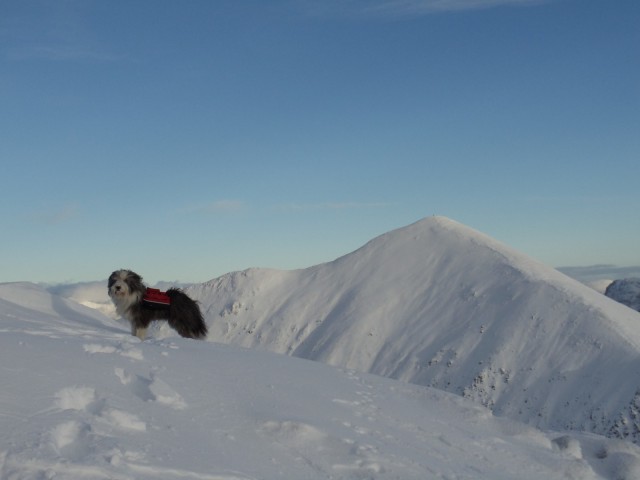 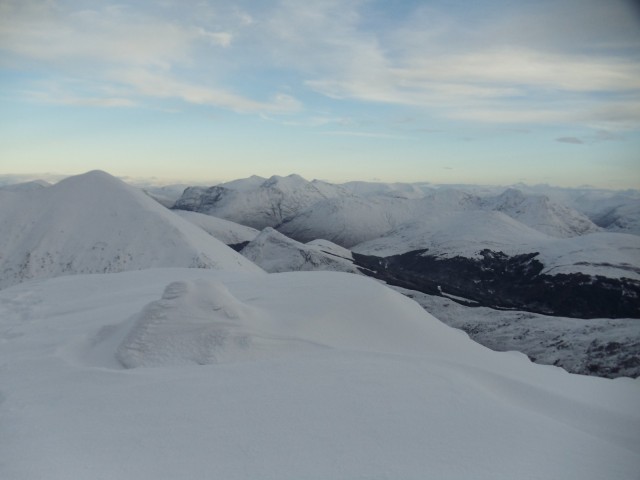 Looking to Sgorr Dhearg. Bidean nam Bian and co behind 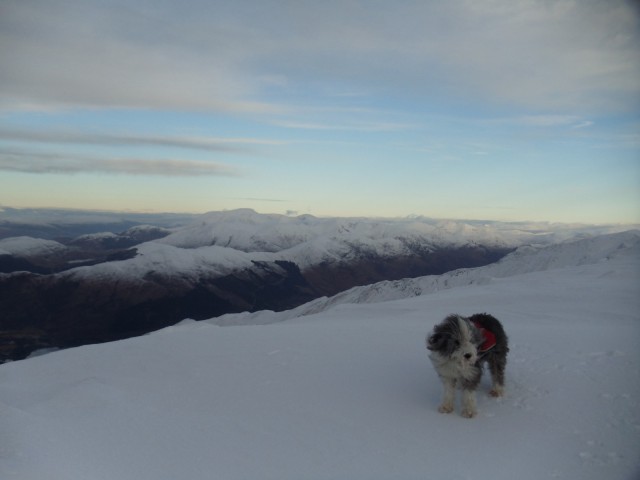 
This was a step up for us in the winter walking stakes, there were times when heading up the north ridge we thought this is the real deal, this is for real, this is our kind of winter walking. And when we started ascending Sgorr Dhonuill the excitement just got greater. That ridge in winter conditions was truly amazing.

We descended back to the col with extra care. We then dropped down to the north heading for the woods. We ( I ) did get lost ever so slightly in the woods. It was a right fight trying to battle our way out but we did and soon we reached the track that would lead us back the car.

PS…. Give the north ridge ago, it will be well worth it.

Excellent report and couldn't have been posted at a better time, as they are hopefully my next two Munros in the next couple of weeks - the conditions look superb.....cheers

wilson seems to be enjoying himself as usual

I'm planning on doing the North Ridge sometime as I haven't yet done Sgurr Ban and would like to. It looks okay from your photos - presumably there are no difficulties on it?

Cracking report once again Dave.. great shots of the swirling mist on the ridge.

Did wilson put his crampons on

Never thought of doing this from the North (did it the normal route), looks a fab challenge.

Glad you all got home safely.

ps how many Munros has Wilson done? Perhaps he should have his own logon so we can track how he's doing

Hi Davetherave,
Great report. Lovely pictures. Does wilson seem a bit bored in the last picture. I think he is saying "can we get a move on"

We done this at the Glencoe meet following the walkhighlands route. I remember a huge drop into Coire Sgreamhach on the descent from Sgorr Dhonuill so I imagine that would be more treacherous in the snow.

I am not keen on forests either so thats an interesting route you choose. well done

Cracking stuff Dave - one of my favourite hills

We used the N ridge for a descent on our last trip. It's an excellent ridge

yorkie bagger wrote:I'm planning on doing the North Ridge sometime as I haven't yet done Sgurr Ban and would like to. It looks okay from your photos - presumably there are no difficulties on it?

Its a bit of a pain getting out of the cropped woods on the west side, but certainly avoid the woods above the Old Rectory. They are awful!

To avoid tree stumps and ditches, park up by the school and pick up a path through a field up to Bheinn Bhan, up to Sgorr Bhan and then do the munros. Slightly more exhilarating is to walk up the glen from the school and ascend the west spur, but the path would be tricky in the snow.