Just Avoiding Wrath in the north

Just Avoiding Wrath in the north


“Oh good!” said R when I reported that a new Marilyn had emerged, remembering the pleasant day we had spent ambling over to do Sron Smeur when it was discovered to be a Marilyn
“It’s not ‘Oh good’ " I said, “Look where it is.”
Right up north on the Cape Wrath peninsula Beinn Dearg posed a problem. We had been before to climb Fashven, and had only just made it back between the first and last tourist buses to Cape Wrath lighthouse. Beinn Dearg was almost 4 kilometres beyond Fashven, as the eagle flies, not as the pedestrian squelches.
After looking at the approach from Sandwood Bay and realising that our bikes no longer fitted on the car as we no longer had a tow bar, we decided that we would pull our camping packs from the back of the cupboard, roll off the first bus, and prepare to catch the first one back the next morning. The only problem being that the ferry or bus man might not want to do it next morning. Of course they would, they work seven days a week in the summer, that is how they make a living.
We booked a B & B with the same couple that had been so helpful the previous time. Tony used to be the warden on Cape Wrath and told us that the fence we hoped to follow on the Explorer map was no longer there, as he had spent a month or more taking it out.

The forecast had looked fair until the very day we drove up. Then it ceased to look fair. Sunday 23rd June, the day we intended going in was fine, but Monday was forecast to have heavy rain and thunderstorms. Even if we were prepared to camp on Cape Wrath in a thunderstorm, paying passengers would be most unlikely to materialise for the next day, so we might be there until Tuesday. We decided to catch the ferry, taking only day packs, and see if we could make it in the time. A rather tenuous reason why this time might be better, was that R's consultant had pulled out a huge needle and jabbed him in the knee,which no longer hurt all the time, so he might be speedier. 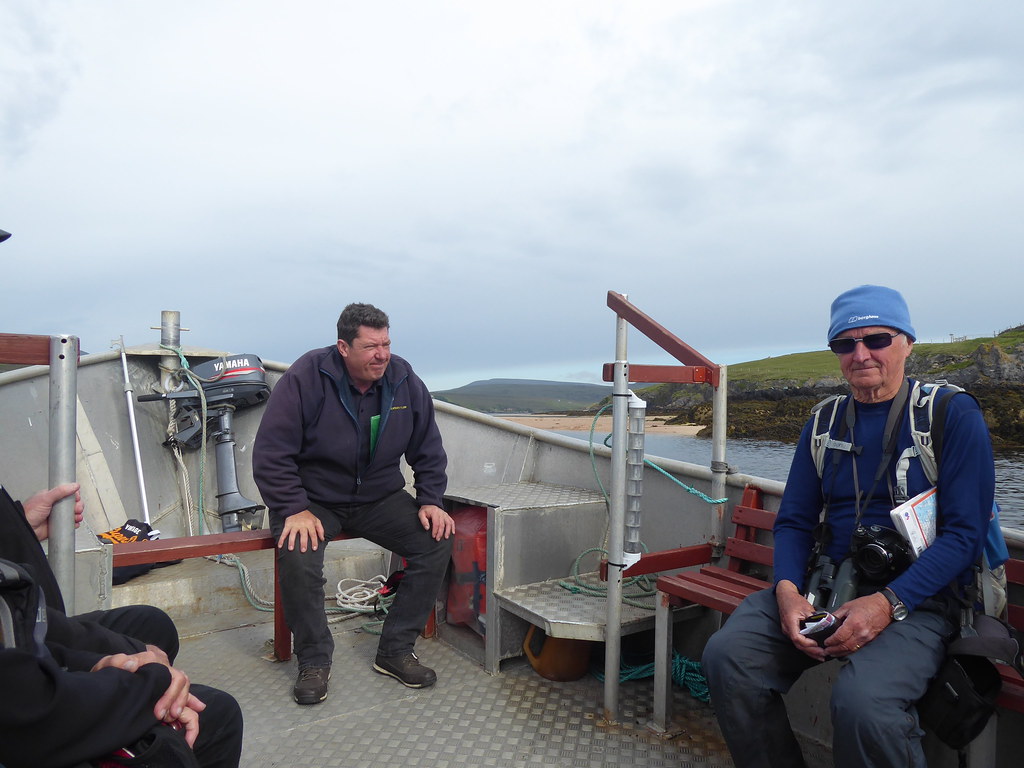 We arrived the other side, and waved goodbye to the ferry 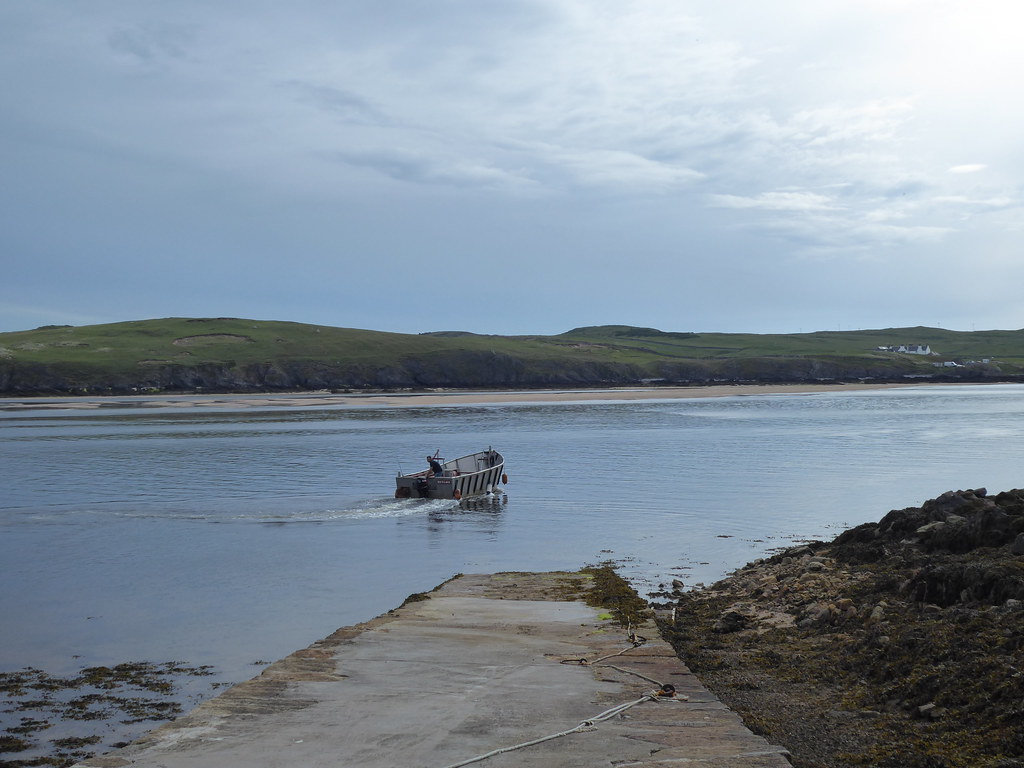 Stuart, our bus driver had taken us across previously, so we knew all his jokes, but so did a bloke who had lost an expensive trekking pole and was returning to see if he could find it who was ready with counter jokes and punch lines, until Stuart said “Hey, I’m the one paid to make the jokes around here.”
The road had deteriorated considerably since I cycled it in 1981, but didn’t seem all that much worse than a couple of years back. It has, however, been declassified.

Stuart dropped us off just before Inshore 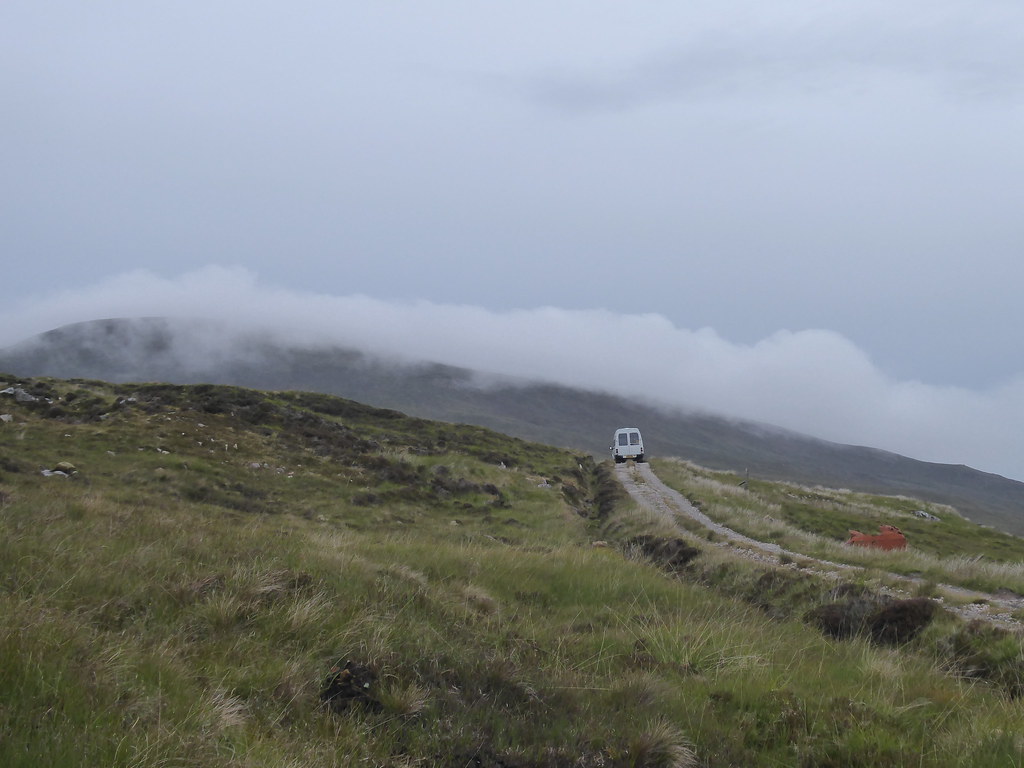 We set out on the squelchy ATV track across the moor. 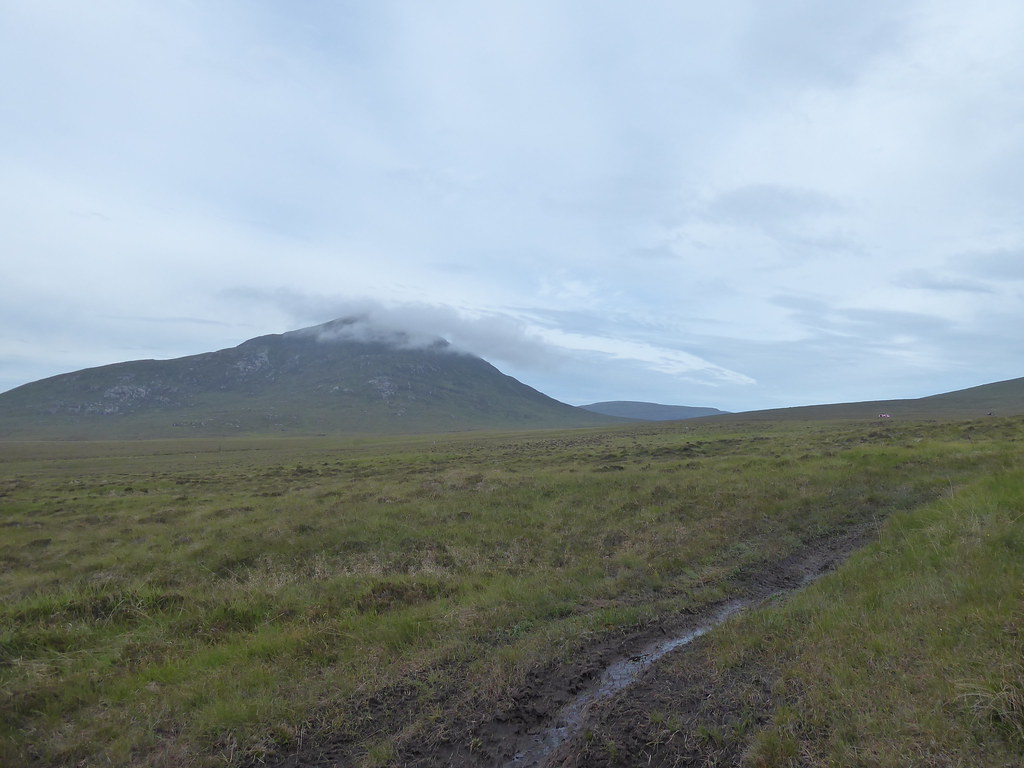 It veered towards Moavally, probably to avoid even worse bog, passing the vehicles that are used for target practice. 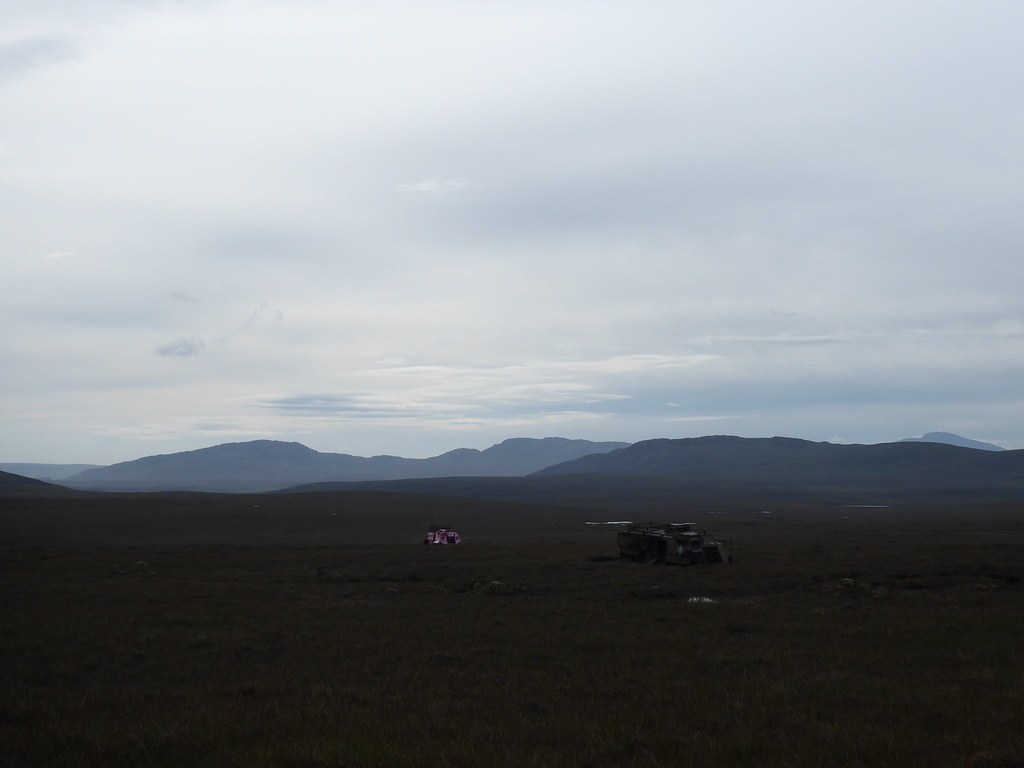 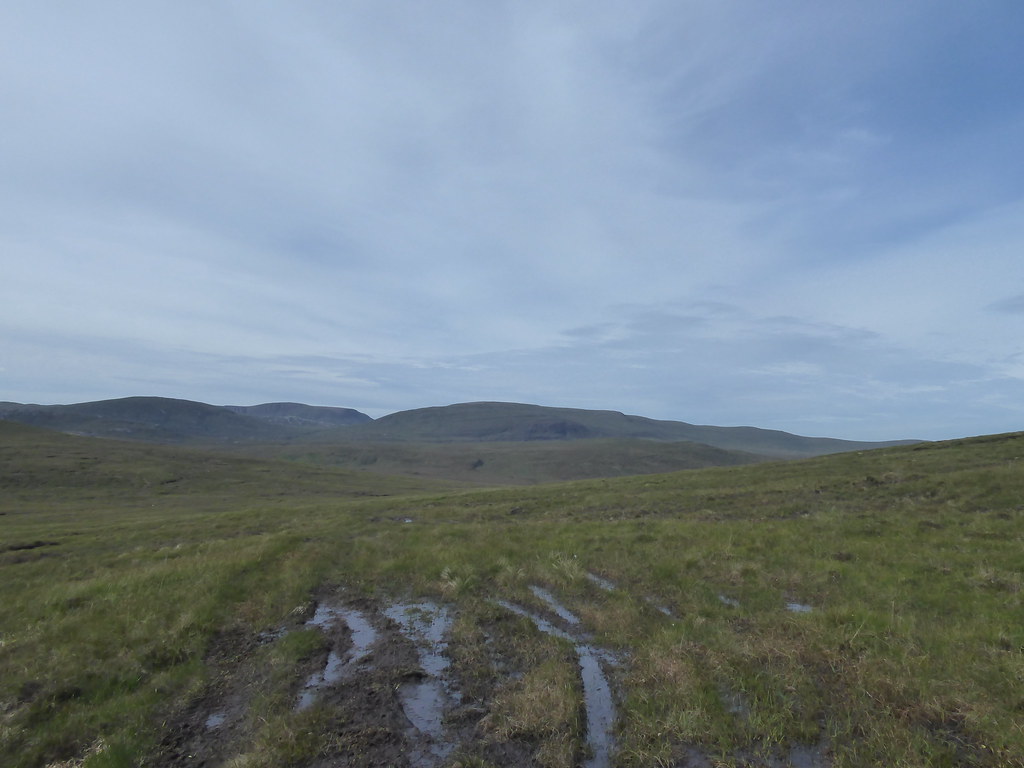 Our target comes into view 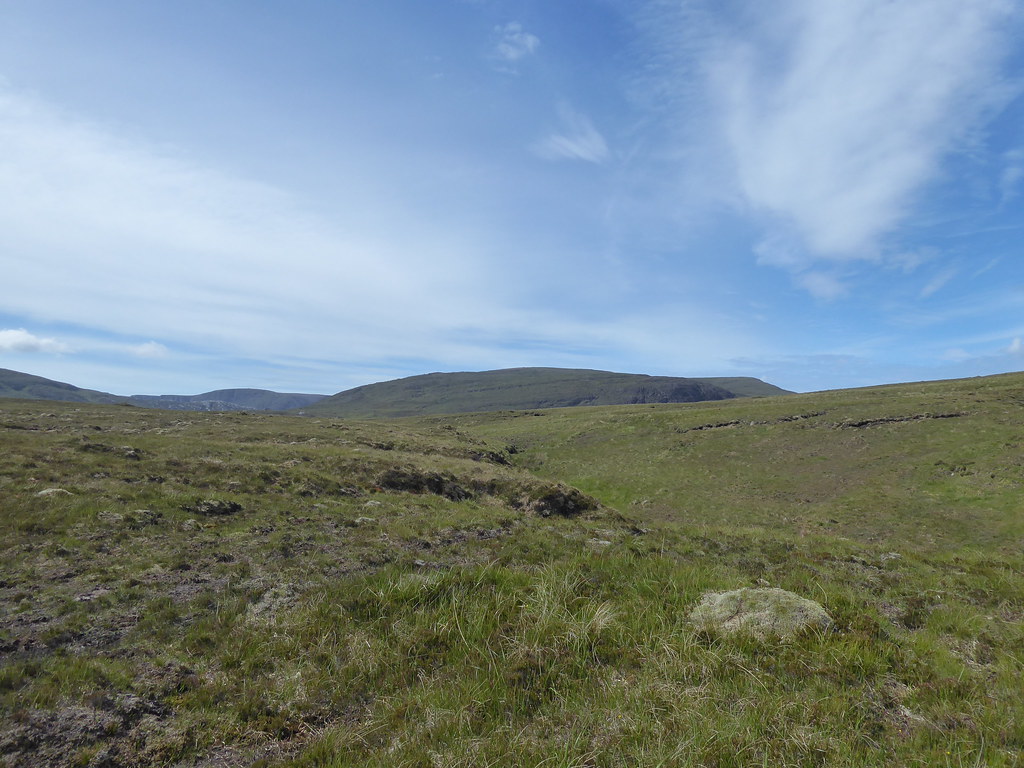 Eventually we reached the bealach between Fashven and Moavally and started going downhill towards a burn, which we managed after some faffing around to find the best place. Next came a fence with a barbed wire top. Although we found a place we could just stride across on the way back, outwards it was waist high, so we had to take our time to avoid damage.
We wove our way through various water features on the moor beyond, 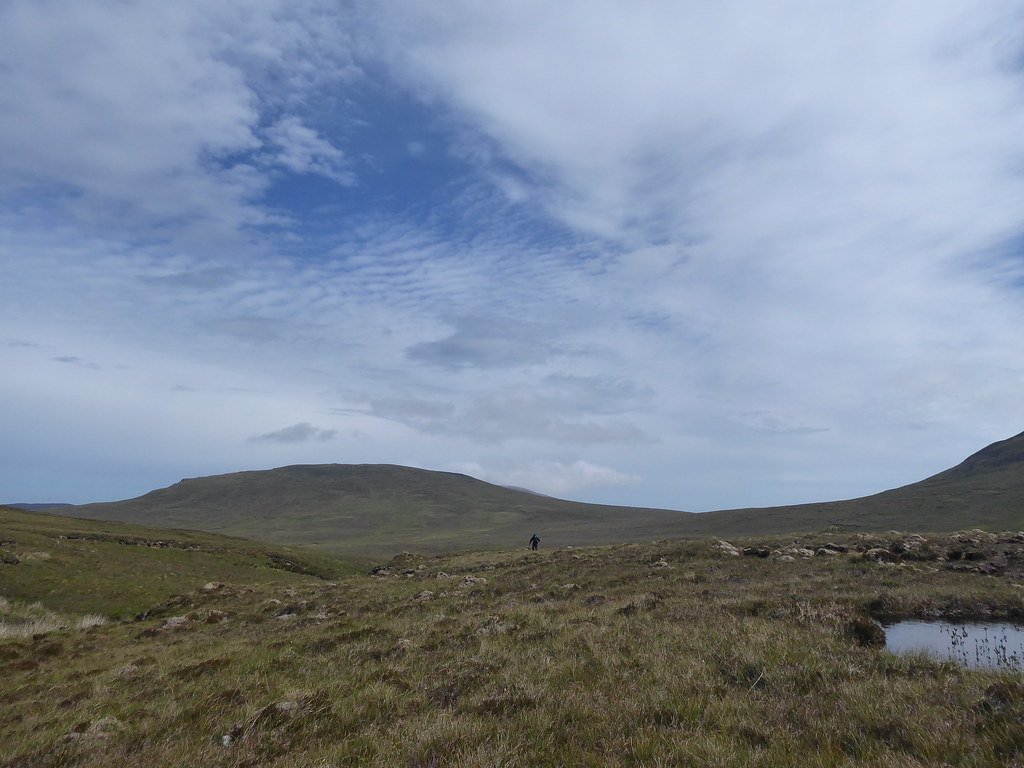 We got to the lochan at around NC291666 where we realised we now had approximately half an hour to get to the summit and back. 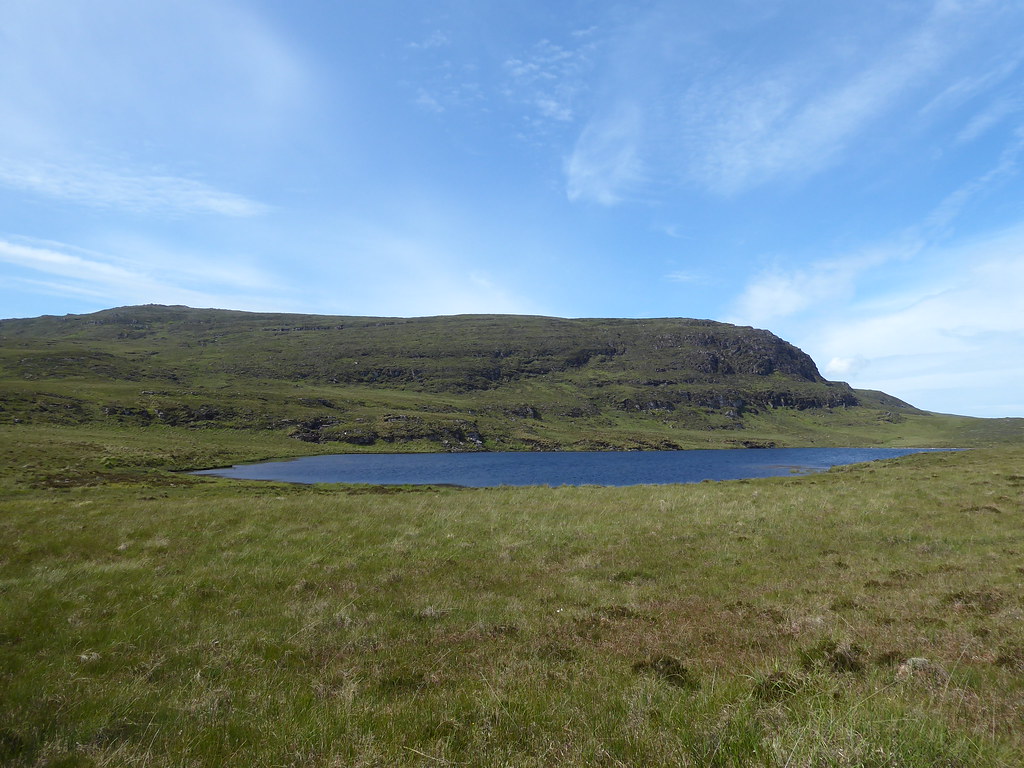 We stashed our rucksacks by a rock. I was giving it my best when I realised that having said we would be back at 3 p.m. we should now turn around. R was way behind, and I belted down the hill to say we must give up, but he refused to do so. I could hardly leave him in the middle of nowhere, so we struggled on. 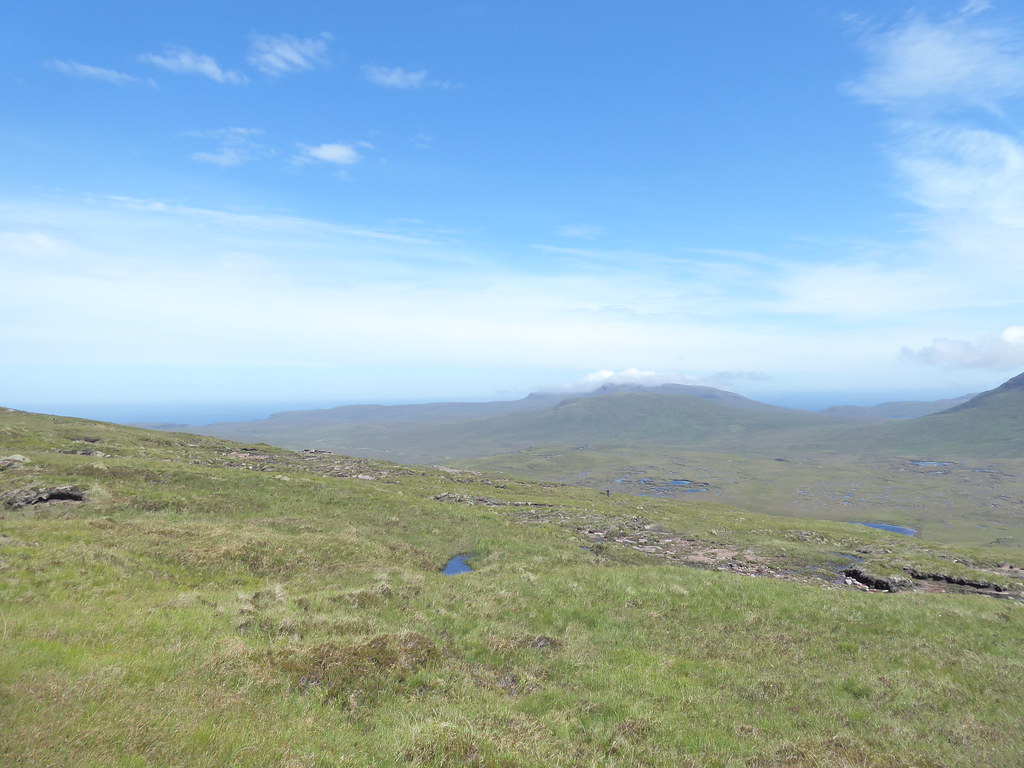 As soon as we had both touched the cairn, with only a minute for photos, we set off back down. 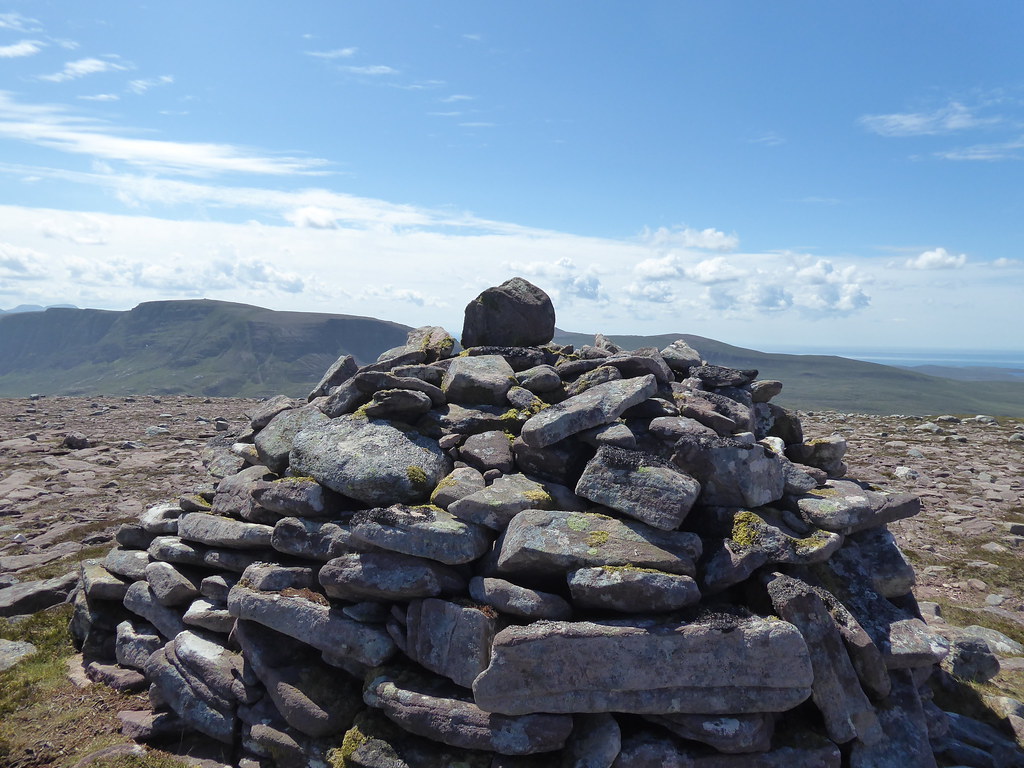 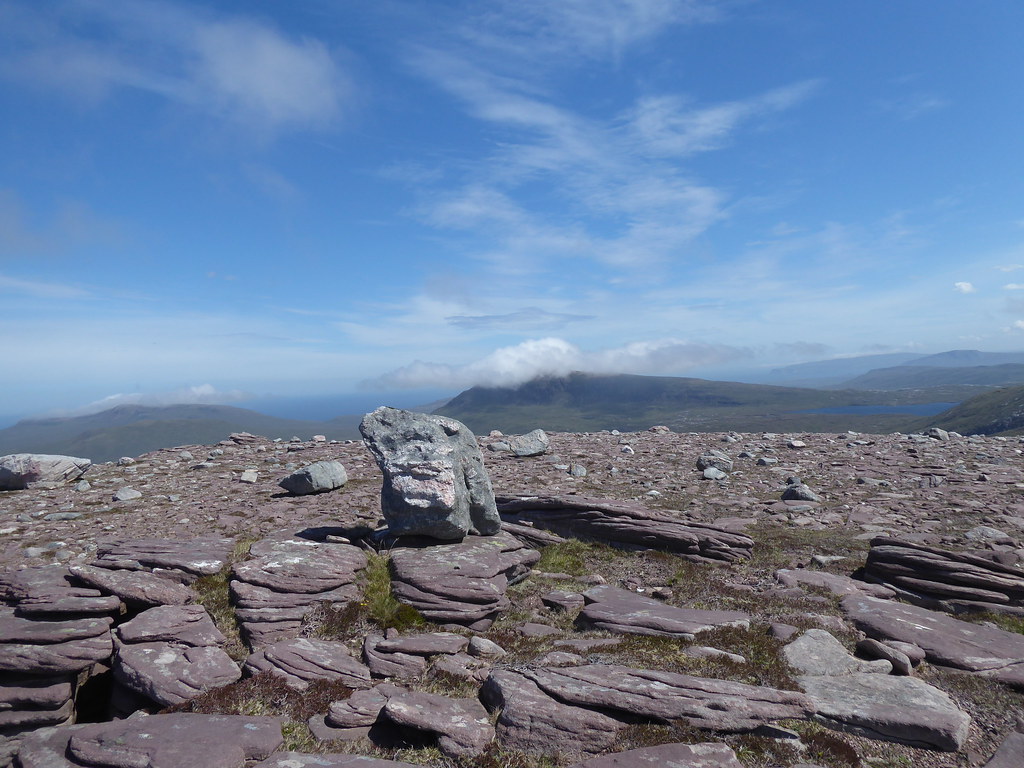 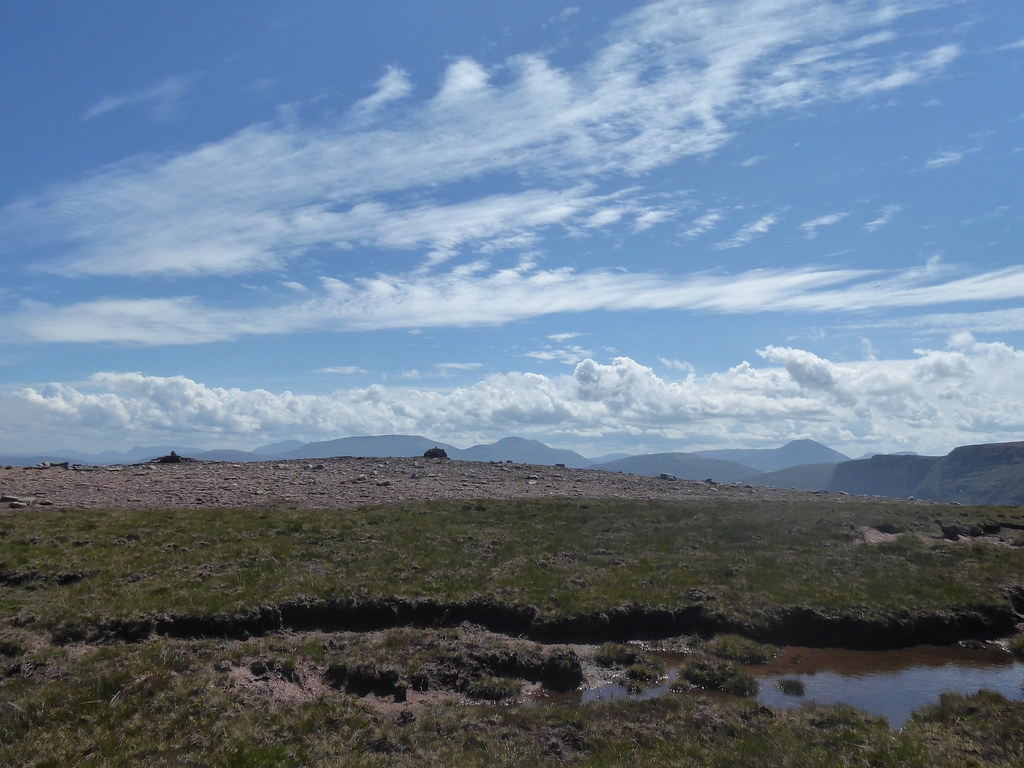 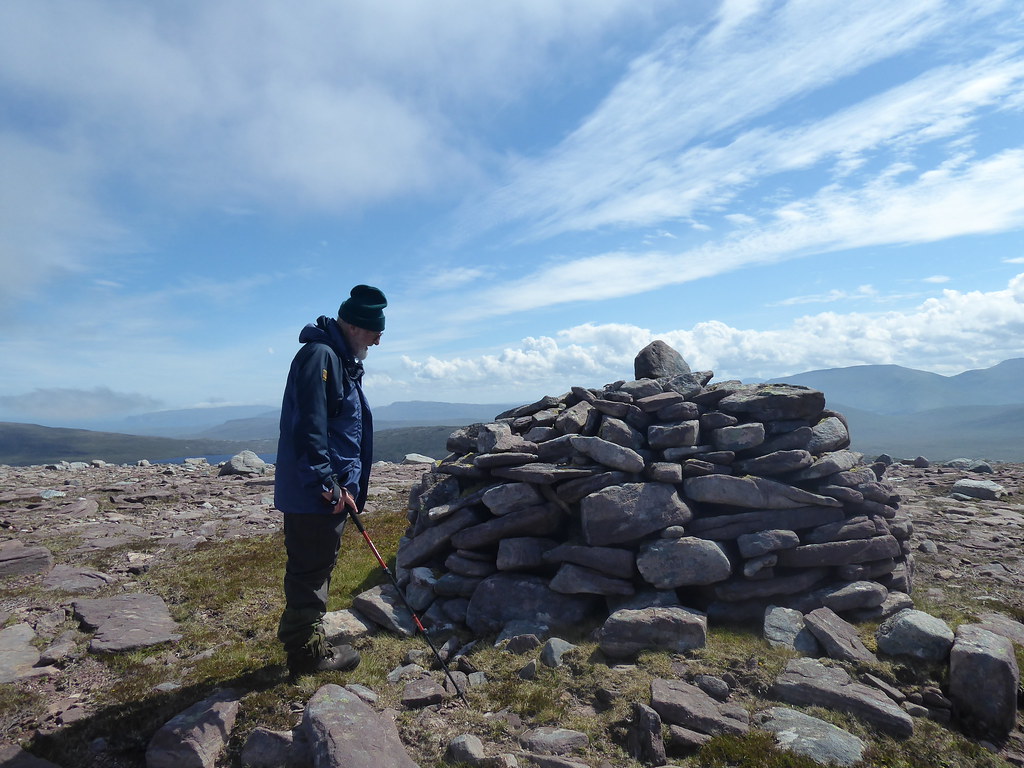 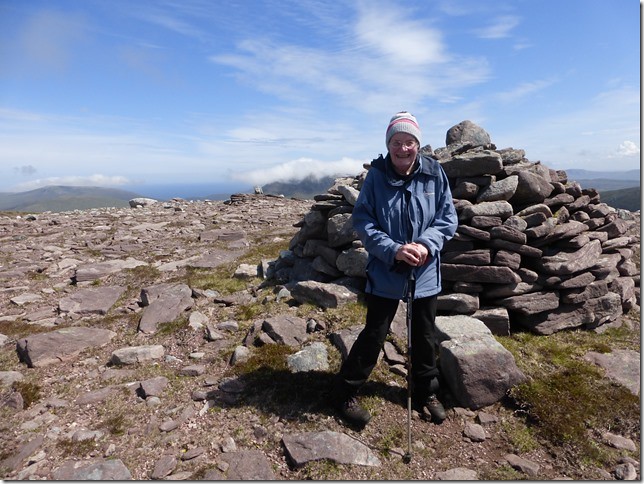 Below, possibly the sea stack at Sandwood Bay 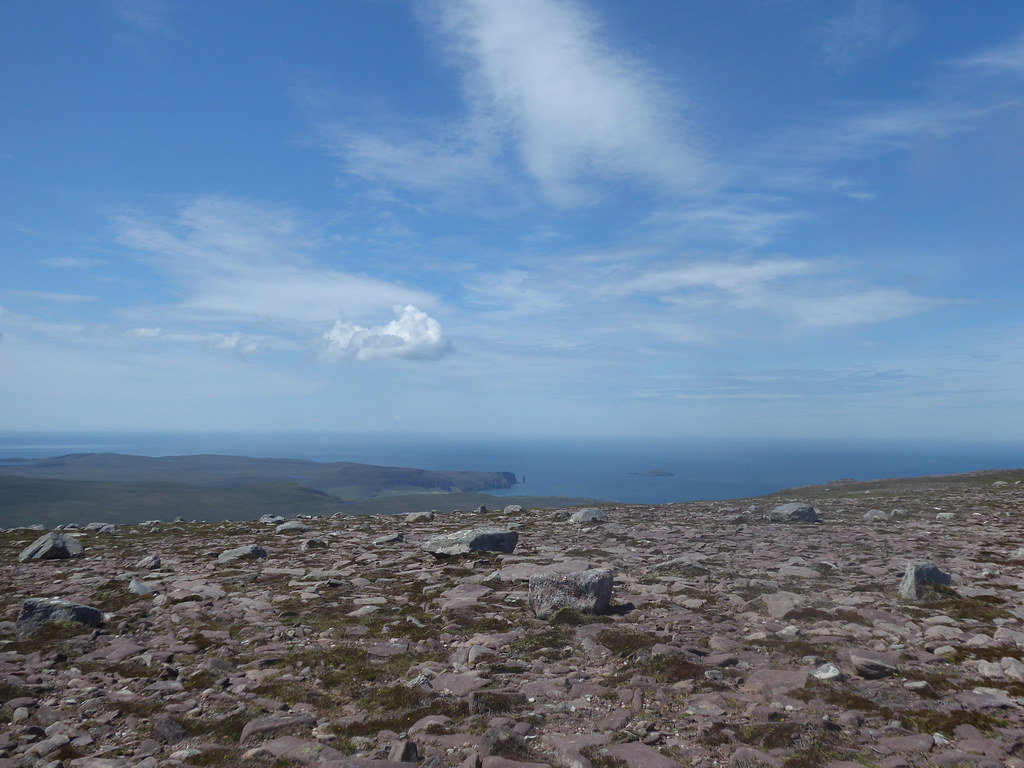 There were very many deer on this hill, but these were the only ones who hung around. 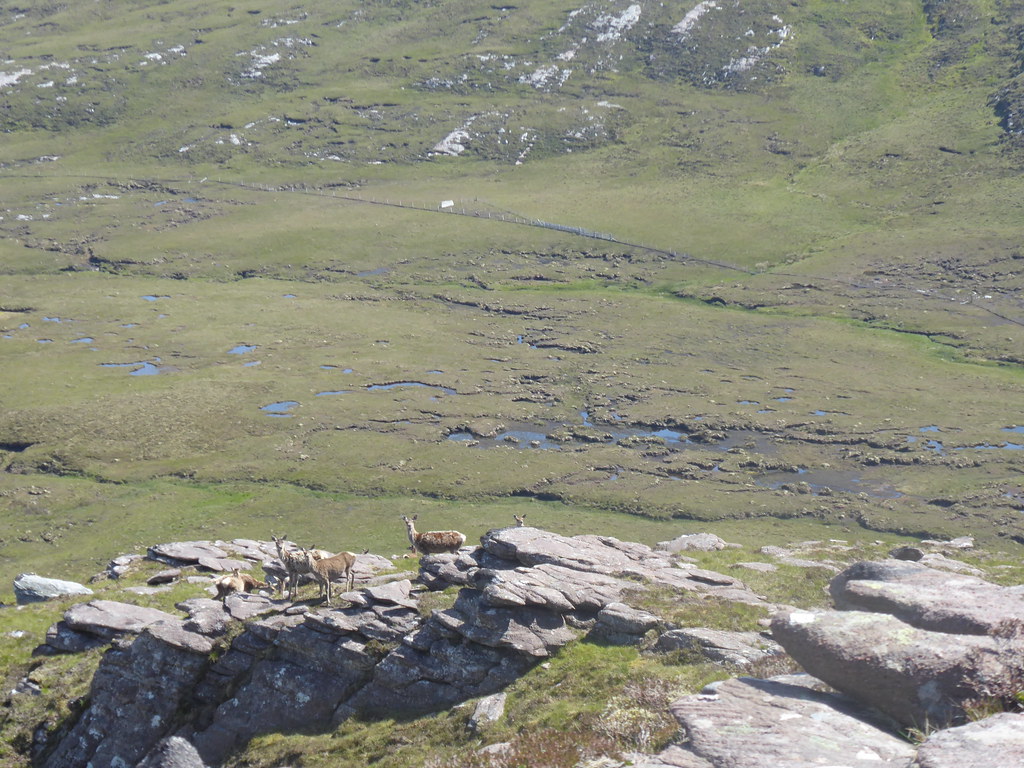 We managed to locate our rucksacks, despite everything looking worryingly different from above, and we thought we didn't have time to take a GPS of where they were.

Back to wandering between pools 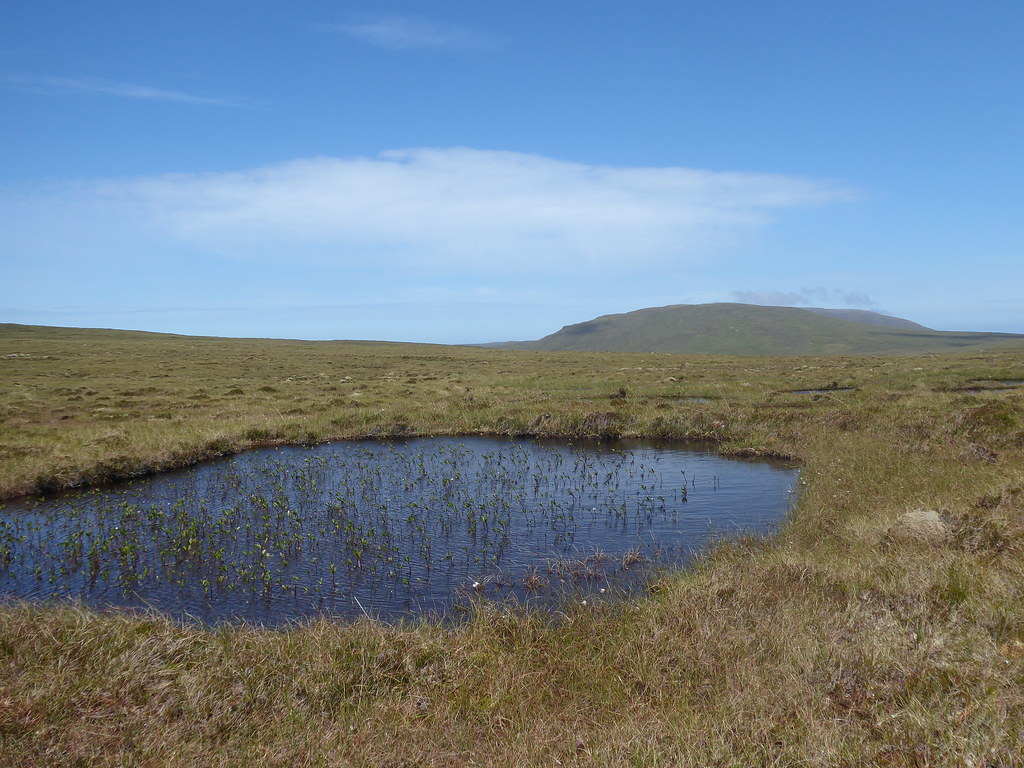 Once safely over both burn and stream, I belted for the road, thinking that Stuart would be worried about us. I didn’t get there until 3.50 p.m and met him ferrying the third party of the day to the lighthouse. I suppose he wasn’t to know that he could get three parties, and that we could have had until 6 p.m. which would have made the whole outing a good deal more pleasant. Below, the house at Inshore 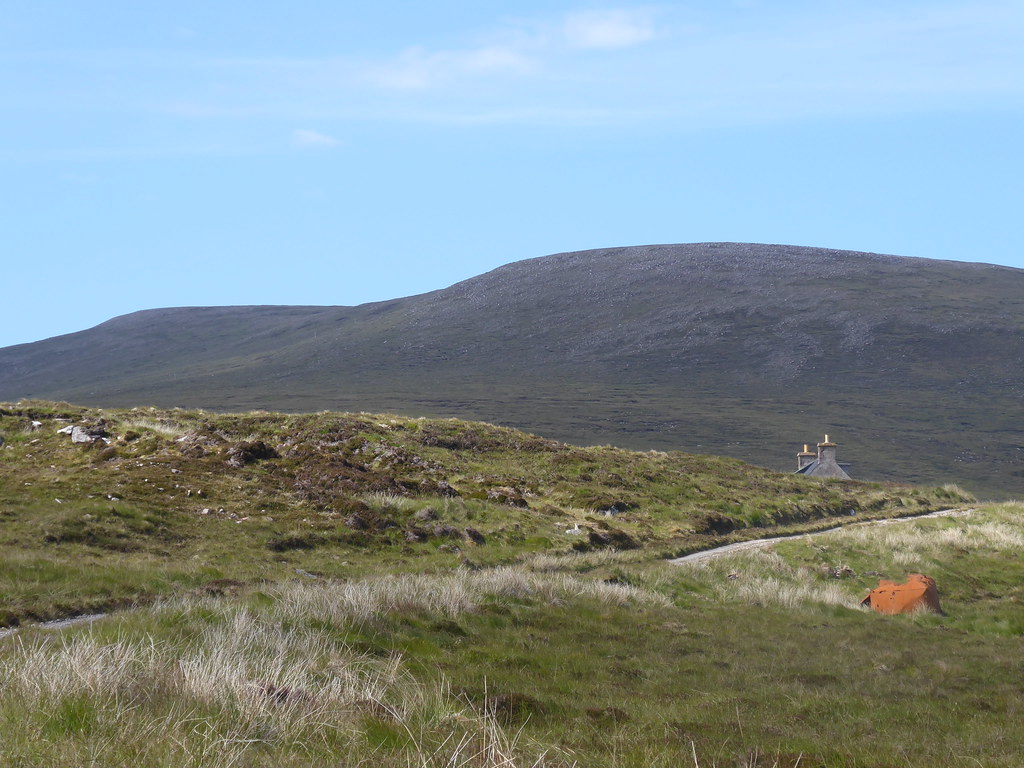 He was worried as he could see only one person, and thought that R had had an accident, but on hearing he was OK, just slow, he left me to wait for R and drove off.
I kept scanning the moor for R returning, and eventually saw him. He made it by 5 p.m. 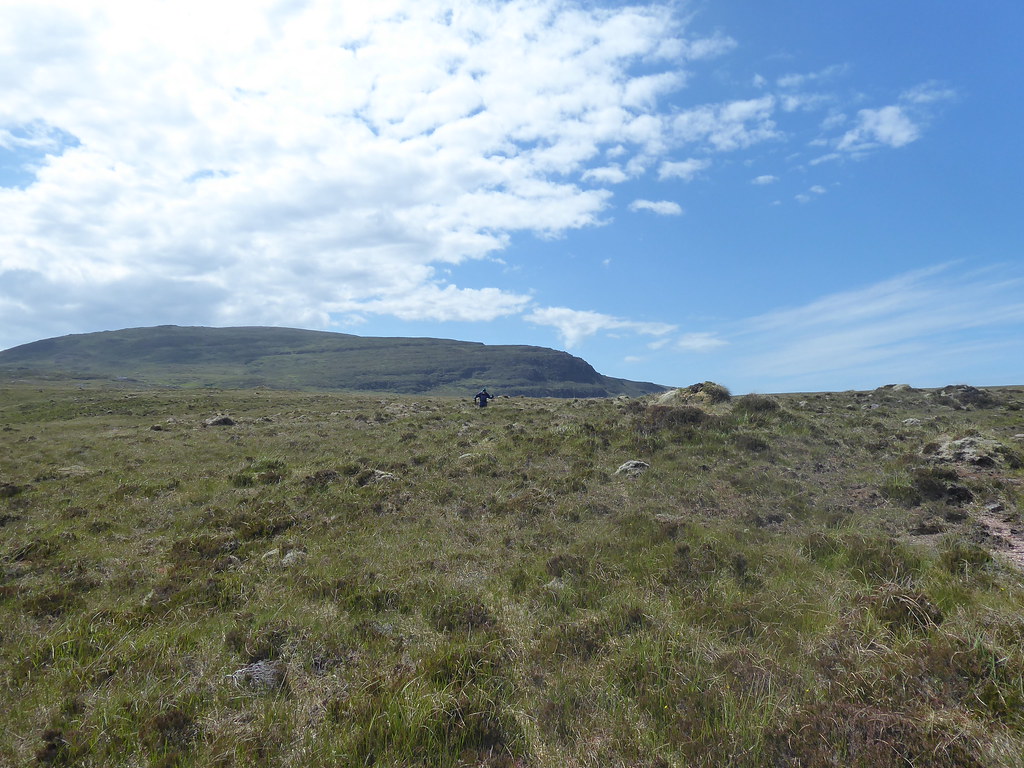 The tourists on the bus seemed quite impressed that we had done 12k and climbed over 1000 feet, but we felt rather shamefaced about being so late.
Stuart swore at all the sheep that refused to get out of the way of the bus, but galloped along the road all the way to the terminus, where the ferry was waiting. The tourist who had gone looking for his trekking pole had found it. It must have been very pricey to warrant the cost of a second trip. I think my pair cost less than a return trip to Cape Wrath lighthouse. 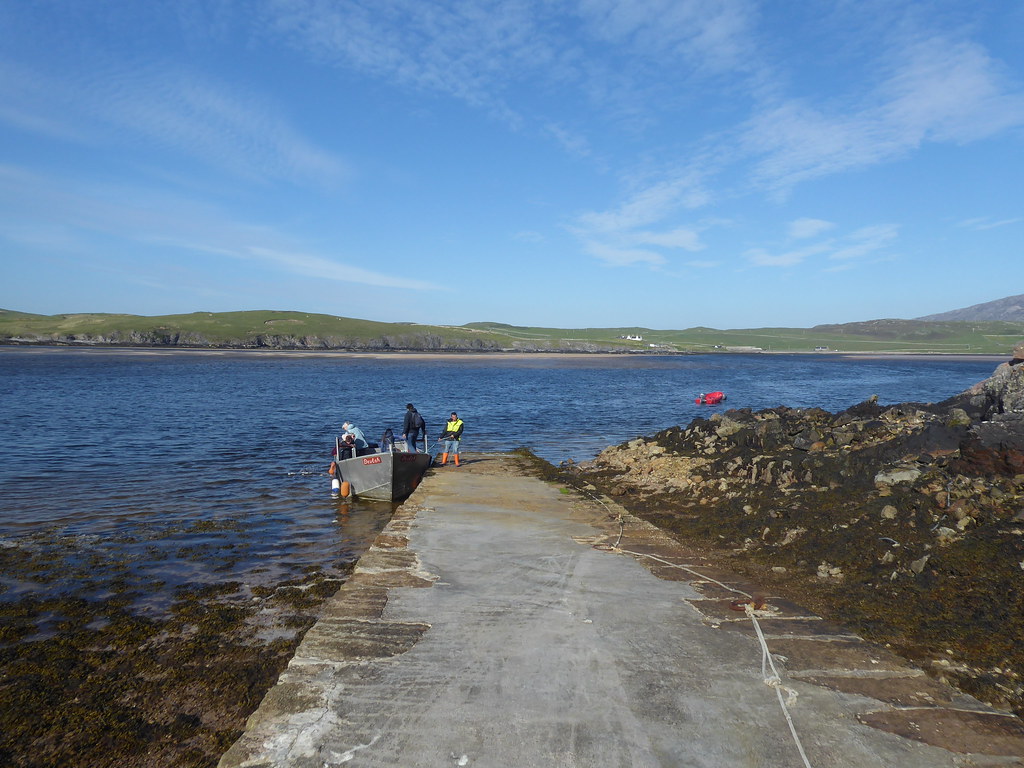 Not the pleasantest of excursions given the time pressure, but we were mighty glad to get it done, as it had been hanging over us ever since it was announced only a month after we thought we had bagged all we could do last year.

If someone manages to find another new Marilyn, I hope it is a second Sron Smeur, not a second Beinn Dearg.
We had arranged to stay three days on the assumption that one at least might be fine. The next day, was fairly miserable, but the promised storm never came, and on the Tuesday we had a lovely boat trip, something we have wanted to do every time we had driven past the Kylesku Hotel.

We saw more seals than we have for a long time 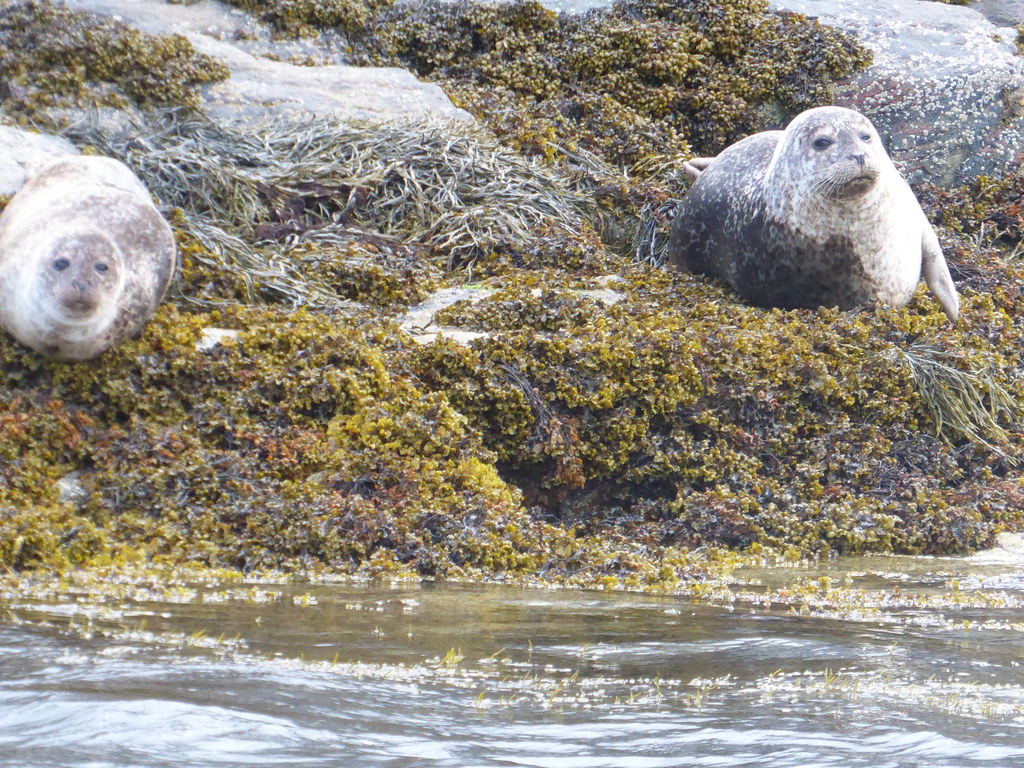 The highest waterfall in Scotland 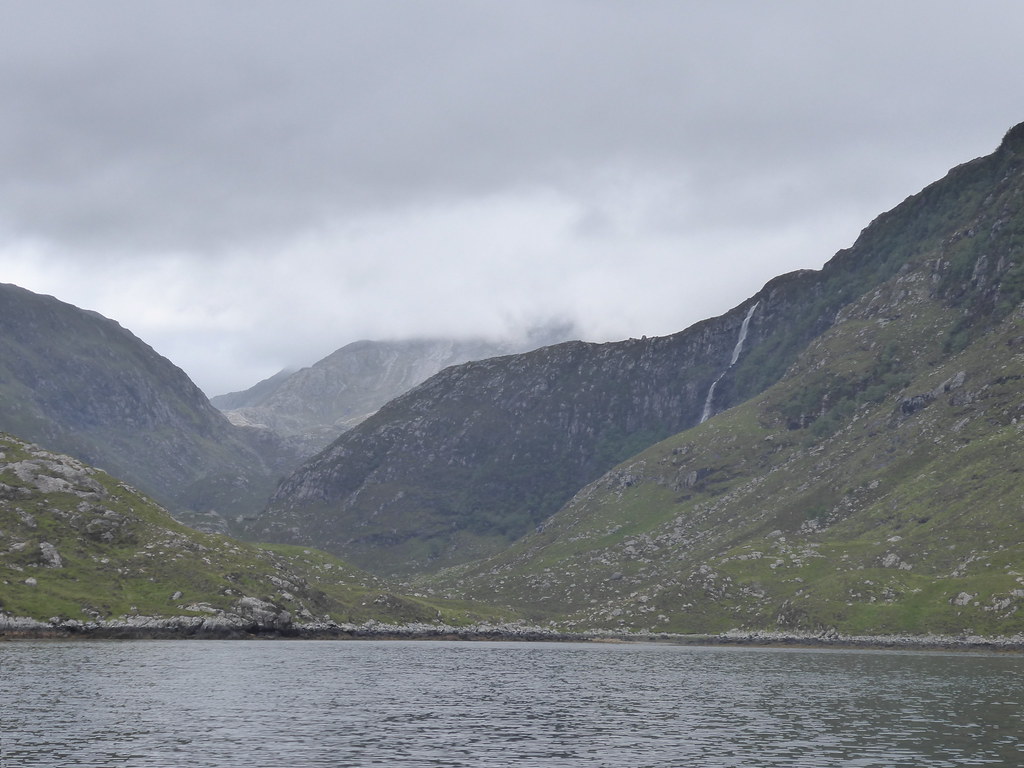 And generally had a good time 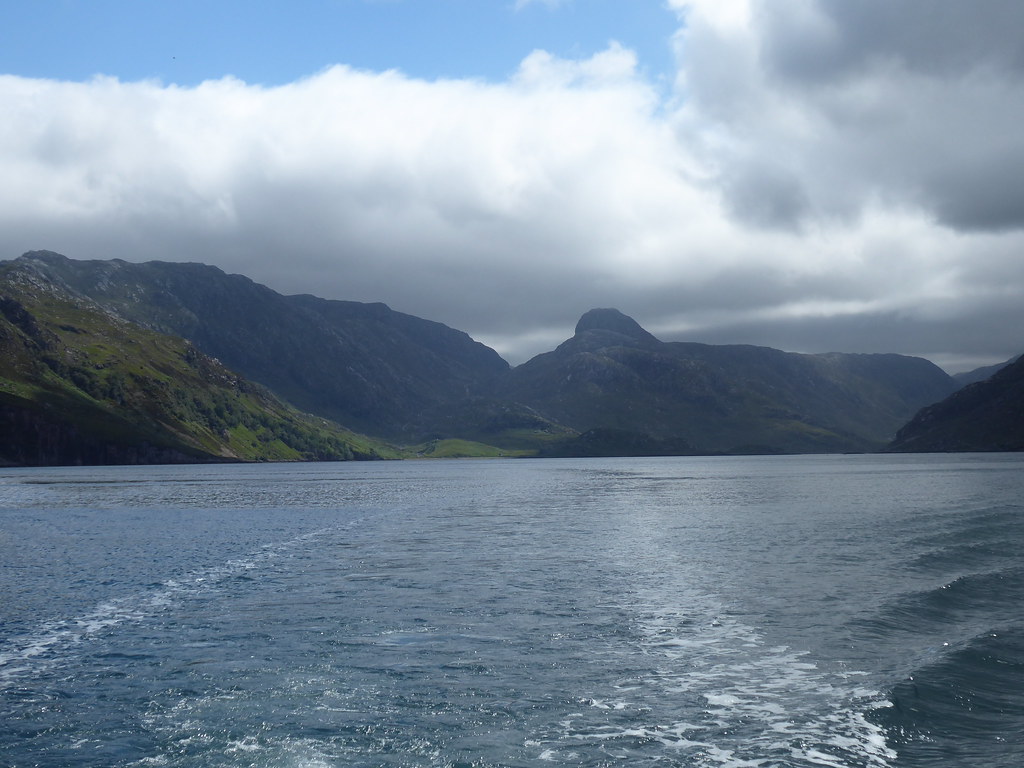 I think I could get used to being a tourist.
On the way back to Durness I took a Weather Watcher picture that got an Editor’s Pick 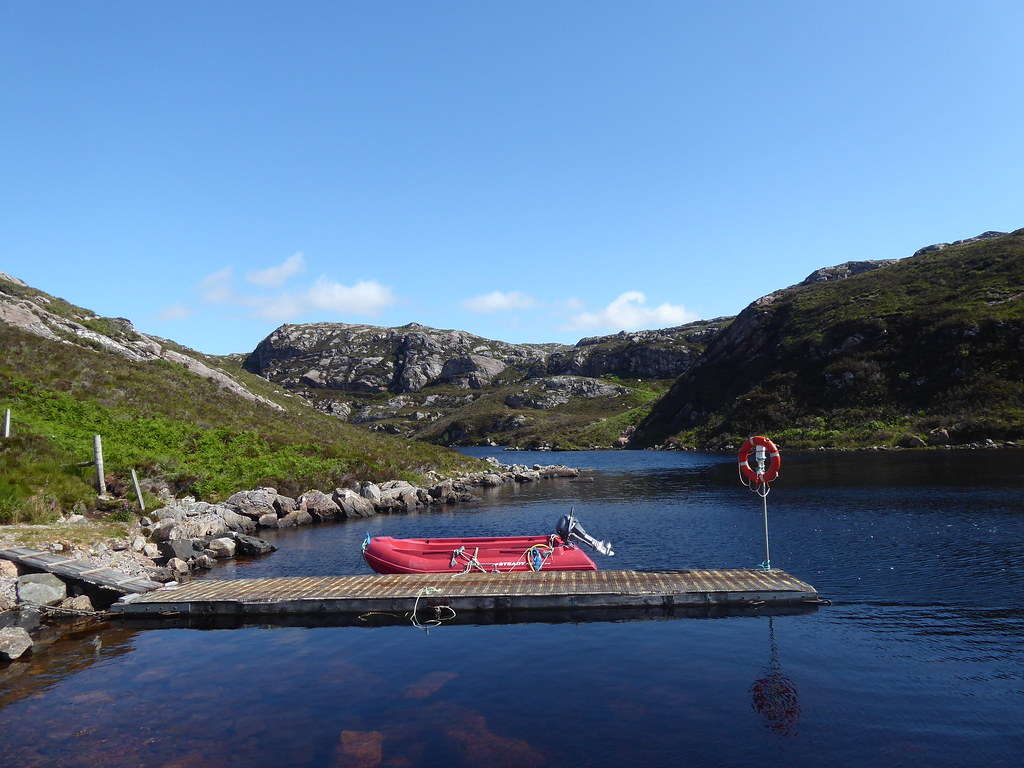 I hadn’t even tried to sen the weather watchers a picture from the top of Beinn Dearg, as I doubted if there was any telephone reception up there, and simply didn’t have time to mess about. I sent those photos from the B & B, but by then, the Weather Watchers weren’t interested.
As soon as we were home, it was time to prepare for a trip to Paris for grandson’s graduation where the temperature was 38 degrees centigrade. There is something to be said for the Scottish climate. Imagine squelching to Beinn Dearg and back without aircon in that.

Re: Just Avoiding Wrath in the north

Huge congratulations once again to you & R, I can only hope I'm half as fit & active as you both are into my later years