Most people share the happy tales of their dogs on adventures, but it doesn't always go smoothly. I adopted my boy Coinneach last September with the intention of him being a hill walking companion for my current hill-dog Moss and myself, and someone for Moss to run around and play with, but that hasn't worked out. His high prey drive and longing to roam which means he is on the lead all the time - literally, I have him attached to a walking belt just to be extra-safe - plus him preventing Moss from doing things she enjoys like swimming after her toys because he gets frustrated and carries on mean he isn't turning out to be a good companion for the hills and other what should be fun adventures. Our walks have been limited this year because each time I have the thought of "but there are often loads of sheep/deer/hares etc" there, and the thought of having to battle through constantly watching for the next distraction and fighting to get him passed doesn't lead to the relaxing walk I'm after. Don't worry! He isn't going anywhere but we are going in a different direction with him. I started cani-cross and he loves that, and I'm hoping to start taking him out with the bike in the autumn as well, but hill walking (except for short, not steep, closer to home hills) is now out for him for the foreseeable future. Fortunately unlike big sister Moss he isn't high-energy (might sound surprising but he doesn't need anywhere near the level of exercise she does) and is perfectly happy at home on the sofa keeping our oldie Fly company. So this is why he will be missing from our adventures (unless we maybe go running somewhere interesting). So, after a bit of a disaster with the boy mentioned above, I decided Moss and myself should have a girly couple of days on our own and we picked Oban as our destination, initially planning on going to Coll and then switching to the lovely, close to port sandy beaches of Tiree instead, but that is Part 2. 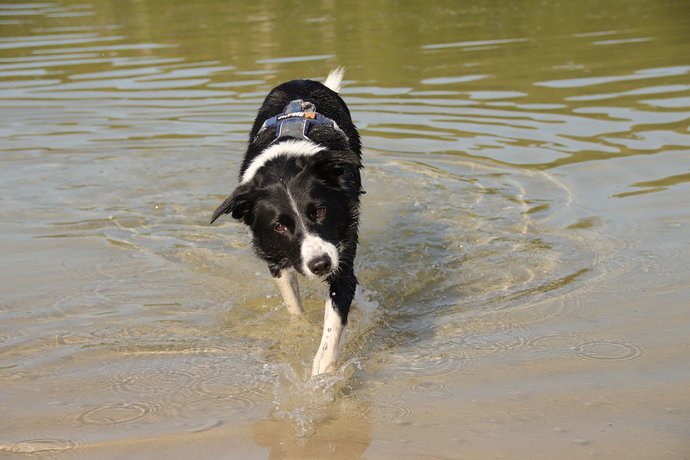 We arrived in Oban, parked the car (ouch at the cost of parking for nearly 2 days!) and headed down to catch the little boat from Oban across to Kerrera. There is a phone number to call to book the boat across at least 15 minutes before travel, or you can book online at least 30 minutes before travel. It is a short trip across to Kerrera where we started our walk first heading up to Hutcheson's Monument seen so often but never visited! From there the views across Oban Bay were amazing. On one side cloudy skies, and bright blue skies on the other! The view from Hutcheson's Monument

Already feeling more relaxed, we headed back down joining the main track that would lead to the other pier following it through a lush, green landscape. 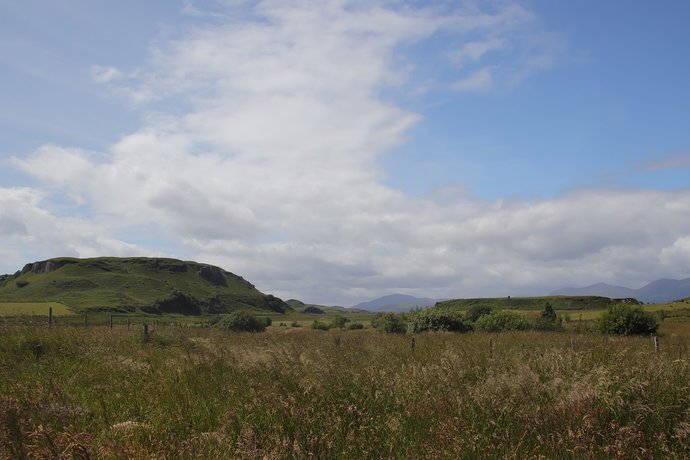 Don't want to mess with this guy...

Reaching the farm we were were joined by another doggy who desperately wanted to be Moss' new best friend and bounced along with us to the gate at the other end of the farm. 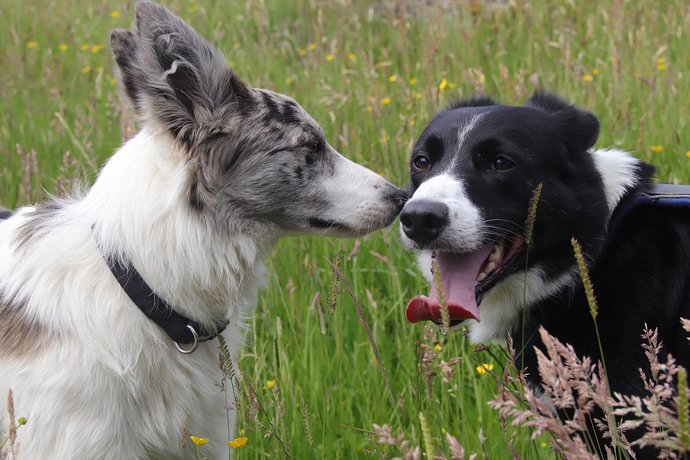 On the other side of the gate, lying either side of the track, was a herd of Highland Cattle. Walking through fields of cows is not my favourite thing to do, and is usually something I'd avoid. There was no way I was walking along the track straight through the middle of them. I had two options, see if I could get into the boggy looking field next to the field with the cows, or go through the cows field but stick close to the fence. I decided to be "brave", carefully opening the gate and slipping through to make sure our new friend didn't follow us any further and following the fence around the field trying to keep a nice, steady pace. One or two of the cows looked, but most didn't seem to be paying any attention to us at all. Once safely passed we cut back across onto the track. Still keeping a smart pace, we reached the other side of the field and safety. Phew! We made it! 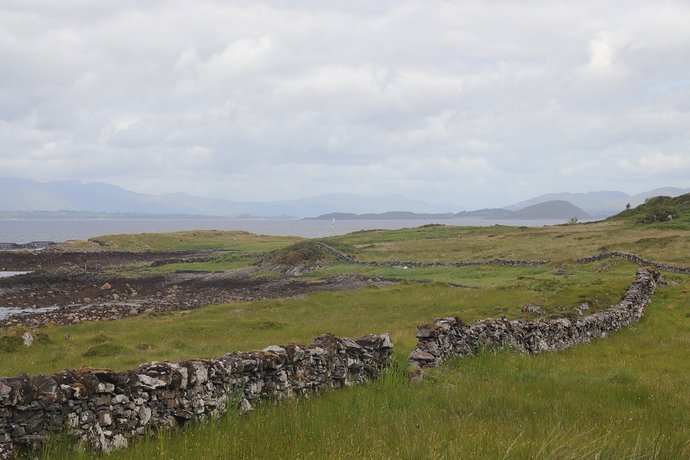 Safely on the other side

The track followed an old stone wall becoming boggier and grassy as it descended to a bay with a pebble beach before drying out as it ascended before becoming a better track again heading towards the other pier. I had planned to add on the other circuit around the island but wasn't sure we would have time to get round so headed to the jetty, however we weren't ready to leave just yet and instead started following the track which was the shortest route to the cafe. Not the white sandy beach we're looking for... Watching the ferry in the distance I gave myself an hour to reach the cafe, as it was it only took us 45 minutes on the stony island road so we stopped for a welcome scone, cake and a tea and sat in the lovely garden enjoying a break. Old wreak on the way to the cafe After our late lunch, we headed along the grassy track to view the castle. I'd been up before on a previous visit and decided not to head up to the castle itself this time - maybe another day when we had more time but I was all too aware we still had the walk back to Oban to do! 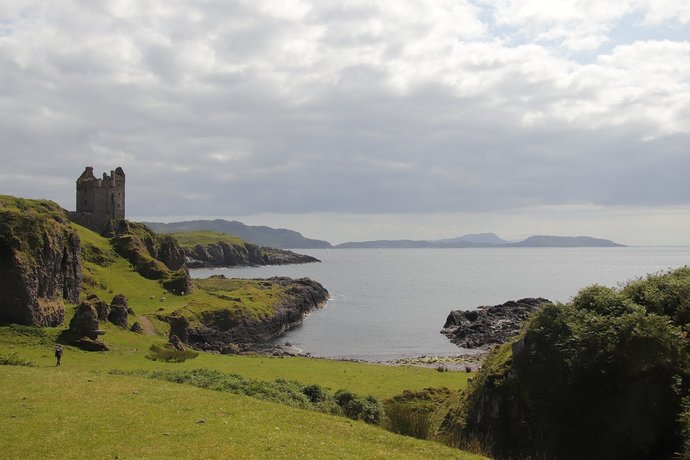 We headed back the way we came returning to the jetty and catching the ferry back across to the mainland. On the other side it is a long tarmac road back to Oban, spotting lots of jellyfish in the water. 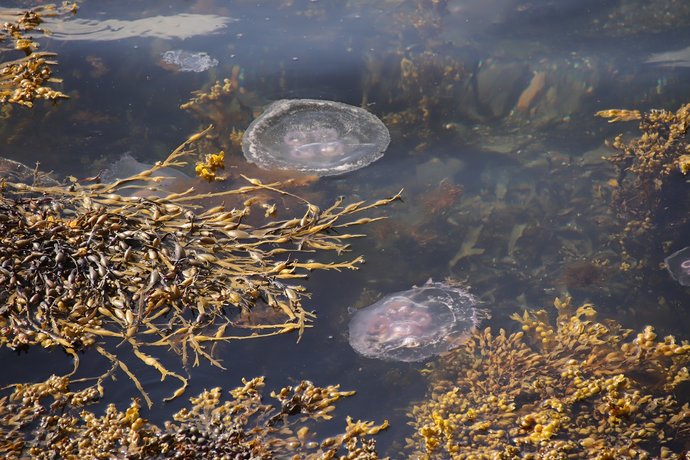 We popped into the Calmac Ferry Terminal to check on our trip for the next, and this is where the distance in this walk is to. All looking good for the next days adventure! But we hadn't finished with today... Checked into out hotel, headed for dinner and it was still early so took a walk up to MacCraigs Tower. Well why not? Been up there a few times and it's nice watching the ferries come and go, plus Moss got to have a run around as she'd spent a lot of her time on the lead. 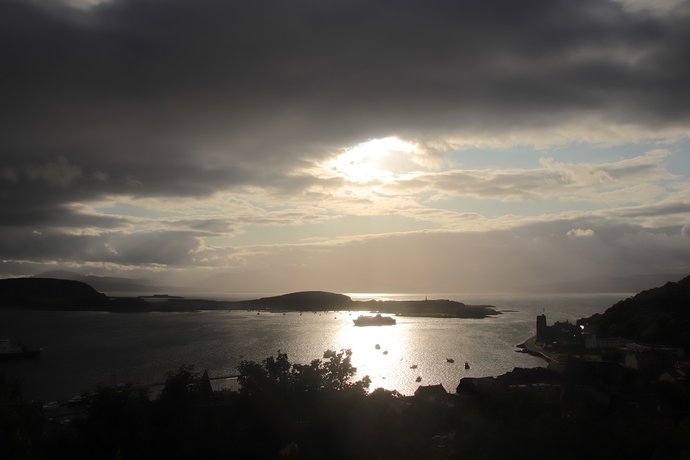 Ferry in the sunlight

Knowing we had an early start the next morning, we finally returned to our hotel. The place could do with some TLC, but it was a comfy bed and that's what matters! Kerrera is a great place to visit and Oban is a gateway to some fantastic places. Great reports.
All the best.

Sunset tripper wrote:Kerrera is a great place to visit and Oban is a gateway to some fantastic places. Great reports.
All the best.

I love Kerrera, just something about it I can't quite say what though. I think it could be the green. Everything is so green but then I've never visited in the autumn when maybe it isn't so green

Not every dog fits in with our plans and they (and we!) are much happier when we go with their strengths. Sounds like your boy will have a great time out on cycle runs - when he's not on the sofa!

Moss is a beauty and the scenery's pretty good too.

dogplodder wrote:Not every dog fits in with our plans and they (and we!) are much happier when we go with their strengths. Sounds like your boy will have a great time out on cycle runs - when he's not on the sofa!

Moss is a beauty and the scenery's pretty good too.

Yes that has turned out to be the case with Coinneach! Will see how he goes with the bike, part of me thinks maybe it will be a bit too fast for him

He loves the (considerably slower!) cani-cross, and we might give running on small hills a go as well having read one of the latest Walk Highlands articles! But nothing big unless there is a major change in his behaviour. Sadly Moss still doesn't have that doggy companion she really needs so we are back to square one!