Soon after I had arrived at Roughburn, two other cars pulled into the small parking area. A group of six disembarked onto the midge-infested roadside. They caught up with me pretty soon, while I was, not far along the track, still busy with remembering to switch on the GPS (you can see in the map in the bottom where I switched it on...), re-tying my shoes, taking off my windbreaker, in short: dawdling. Much of the forested area was felled and apparently still being felled, there were fresh engine tracks and lumbering equipment next to the track. 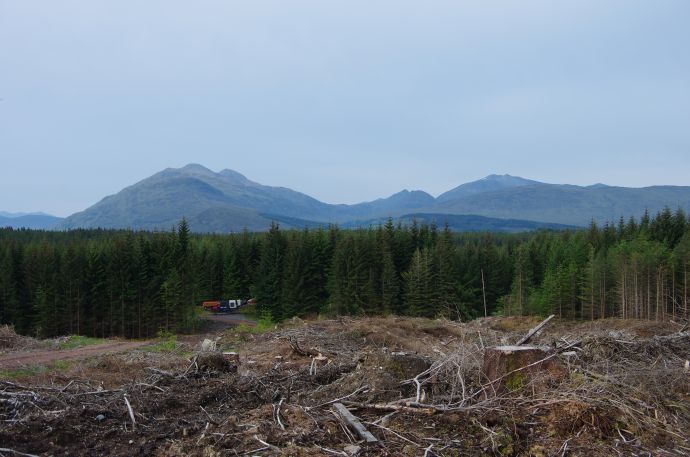 Looking back over recently felled areas, the Easins and the Grey Corries in the background

After exiting the forest, I saw the group of six a certain distance straight ahead of me in the open, apparently hesitating. I turned right behind a fence and crossed a stile to climb up Meall Clachaig, thinking they had missed the point where to cross the fence and enter the open slopes - but I soon realised they were going the walk clockwise and were looking for a good spot to ford the Allt a' Chaorainn.

As for myself, I stoically went up the hillside, sweating like a pig. There was no one about except a mountain hare, and two hours after setting out, I reached the Southern summit of Beinn a' Chaorainn. The main and Northern summit were well visible, and views to Creag Meagaidh were beautiful. 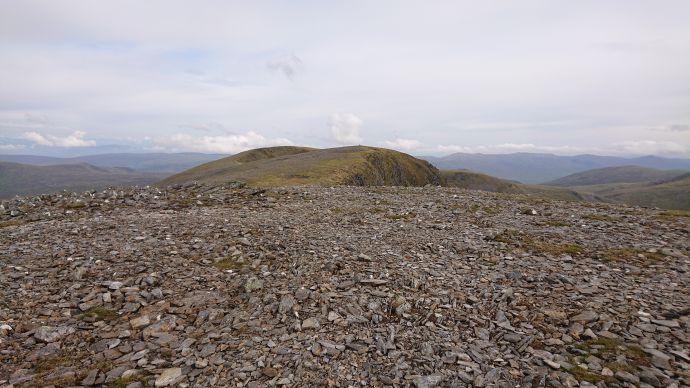 View from the South summit towards the main and North summits

10 Minutes later, I was on the real summit, where I discovered a memorial plate and royal mail model car for a man who had died there in February 2018. I thought of the warning in the route description when going up here in winter - it seems that already several walkers have walked too near the edge and fallen through cornices of snow, thinking there was ground underneath.
I remained lost in thought for a while, thinking about the gap the tragic accident must have torn into the lives of his family and the community here. 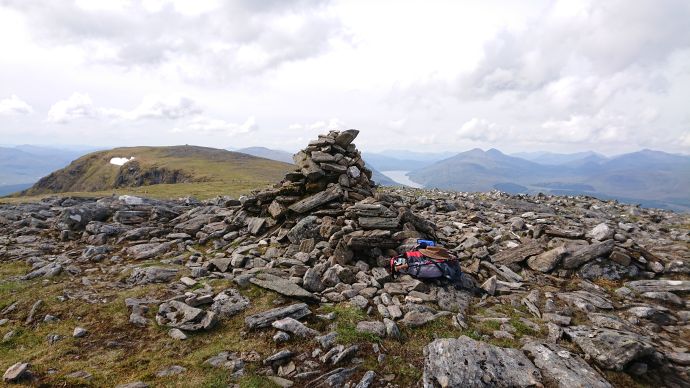 View from the main summit toward the South summit, the Easins and Loch Treig in the background

Looking down into Coire na h-Uamha. Click to see large

Beinn a' Chaorainn's main summit and steep Eastern side. Click to see large

Even though the weather was much better than forecast (most of all it was dry), it was very cold on the summit, so I moved on. Behind the North summit, I already saw the group of six approaching. Telling them how impressed I was with their speed, they told me that the young lady in their group, which had already gone on past me, was already on her second Munro circuit. They had planned to do the Creag Meagaidh Munros as well later that day, which impressed me even more. I'd have loved to chat some more because I vaguely felt to have seen some of the group's faces here on WH, but they had to press on.

The pass of Tom Mòr and Beinn Teallach from the Nortwestern slopes of Beinn a' Chaorainn. Click to see large

Going down to Tom Mòr seemed like a waste of good altitude, but couldn't be helped. Beinn Teallach looked quite small from up here (well, it is the lowest Munro), but still the climb made me sweat once more until I was quite drenched from the inside. My head kept playing three or four songs with alternative lyrics, such as "The hill is so high, the path is so long, but I got to get to the summit, stumblin' on" (yes, Suzi Quatro and Chris Norman). I wanted to remember the other ones as well, but, well, age...

I only remember that another one was a song by U2.

The moment I arrived on the summit of Beinn Teallach, another man arrived from the other side, but left again right after a short talk. Beinn a' Chaorainn loomed very high to the East, and I was glad having walked the circuit counterclockwise.

Beinn a' Chaorainn from Beinn Teallach. Click to see large 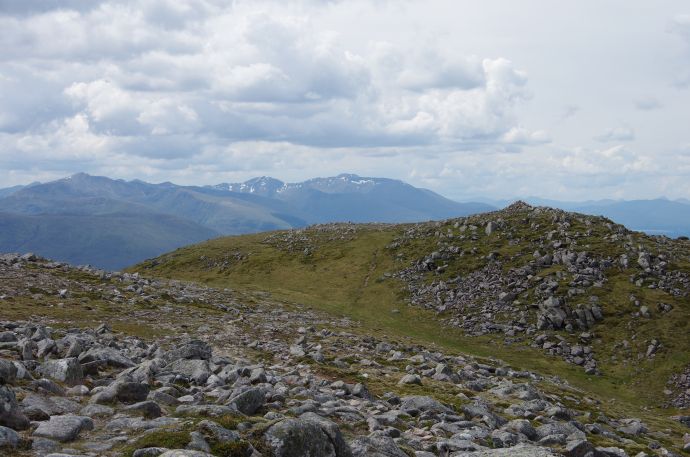 The second summit of Beinn Teallach, the Grey Corries, the Aonachs, and the Ben in the background

Going down was not a problem, although the lower slopes were quite slippery. The route description said to cross the Allt a 'Chaorainn rather as high up as possible, but I decided to use the muddy path along the forest plantation and the ford marked in the map. Crossing was not a problem in the low water, and I was soon back at the car.

20190608.gpx Open full screen  NB: Walkhighlands is not responsible for the accuracy of gpx files in users posts