The day was always going to be one of contrasts.

Beinn Luibhean had been one of those hills driven past, and looked across at, far too frequently: shunned in favour of supposedly more satisfactory objectives. But not today.

As I passed, the lakeside car park at Succoth was beginning to fill with those willing pay the price. A few minutes later, queues on either side of the roadworks on the A83 below the Rest and be Thankful hinted at the prospect of a busy day ahead: no doubt the refreshment van was already doing brisk business. Surprisingly, I pulled into an empty layby just beyond the Croe Water bridge and started the day alone.

Mists clung to the forested hillsides of Glen Croe and the faint breeze struggled to shift the cloud on top of Binnein an Fhidhleir never mind keep the midges at bay. “Get on with it,” they seemed to be threatening, “or we’ll have you for breakfast.” Escaping their attention, I walked back over the bridge, climbed over the gate, and clambered steadily up beside the stream to access the south ridge. 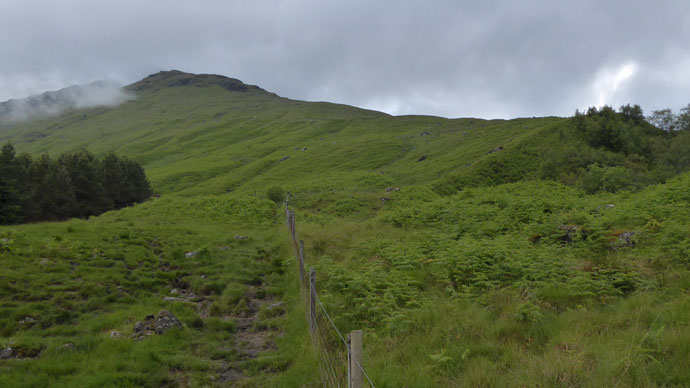 The south ridge of Beinn Luibhean - up, ahead and into the mists

The bracken had started to grow and moist, dewy fronds dampened my progress with every step from either side of the path. Reluctant to plunge into their depths and make a direct assault ion the ridge, I most probably stuck with the path for too long. In the end, needs must or I’d have ended up at the dam below Coire Croe.

The ridge is an amiable sort of place. Once above the bracken, there might have been a path somewhere but it didn’t seem to matter. Rising, meandering, finding the line of least resistance, you gradually ascend above it all. The valley gradually dropped away until it disappeared into the mist. And then, as I suspected the summit was close, it started to rain.

With Beinn Luibhean shrouded in mist, and me shrouded and sweltering in waterproofs, I realised I was there. A dank arrival at an unassuming, unspoilt spot. There’s no crumbling cairn, just a small outcrop aspiring to be a crag; no scoured ground eroded by thousands of boots, just a slightly beaten track you can be grateful for in the mist. 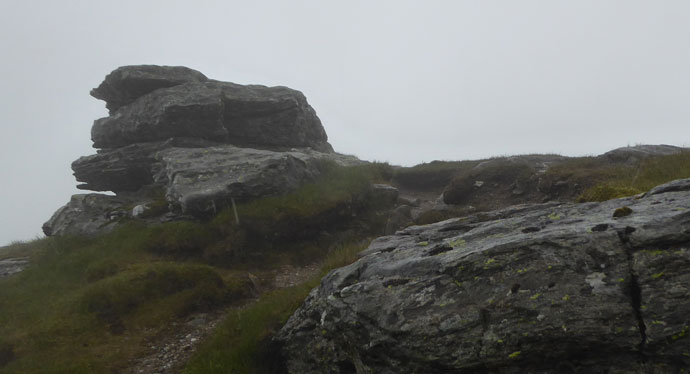 A damp arrival at the summit of Beinn Luibhean

And so, on another crag-in-the-clag, I sat and waited … and was blessed. It really is in a spectacular position, surrounded by all the Arrochar tops. 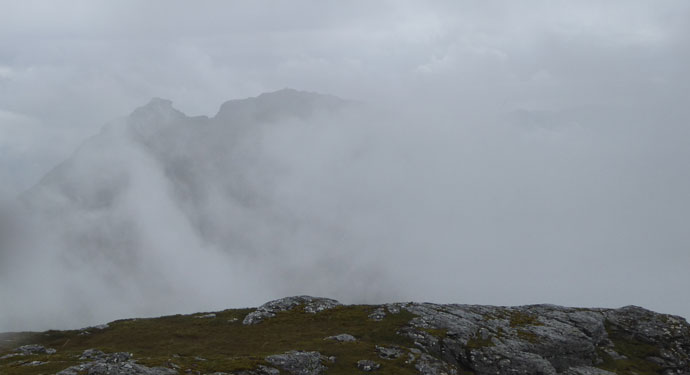 The silhouette of The Cobbler appears through ethereal mists ... 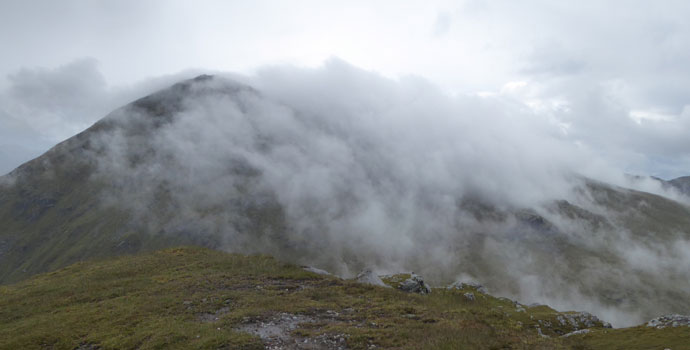 … and the slopes of Beinn Ime appear to be on fire

Decisions, decisions. Munro, Munro, Corbett: perm any two from three. Or, don’t be greedy. Whatever the answer, it would be a contrast with where I sat now, Arrochar attractions, bees to honey pots, ants to sugar bowls: select which epithet or metaphor you prefer.

The Cobbler won: memories from a couple of visits back in the dim and distant 1970s needed to be refreshed.
By now the mists were lifting and not returning. The way ahead, down into the Bealach a Mhargaidh and contouring round to Bealach a Mhaim, was clear. Pathless? Boggy? Most likely both. But in fact, neither. 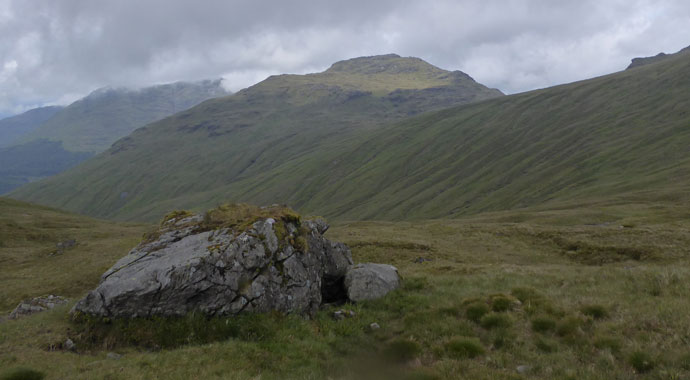 Looking back to the solitary slopes of Beinn Luibhean

In the distance I could see a constant trail, splitting in three directions below The Cobbler. By now the sun was out, the mists had cleared and the threat of further rain was gone. I stopped well before the crowds to avoid the observation, “who’s this muppet in the waterproofs?”

And then it was like stepping from remote white Hebridean sands onto Ayr beach in the middle of Glasgow Fair.
There’s little need to describe the path to the top. There was no surprise when asked for location to be clarified when already halfway up. Suffice to say I was glad I’d revisited, met its challenges and enjoyed the views. 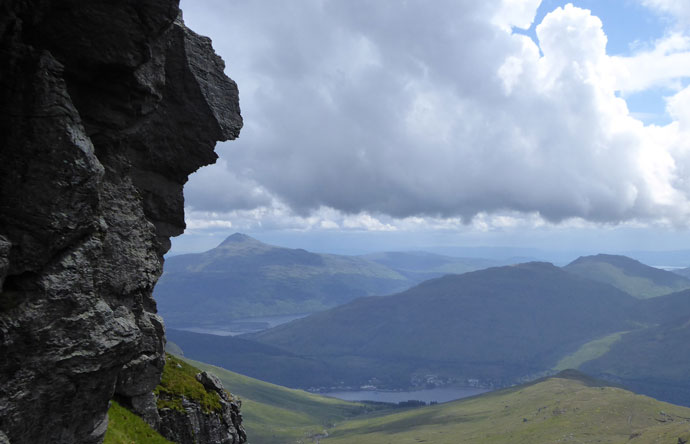 Ben Lomond and the north crags of The Cobbler 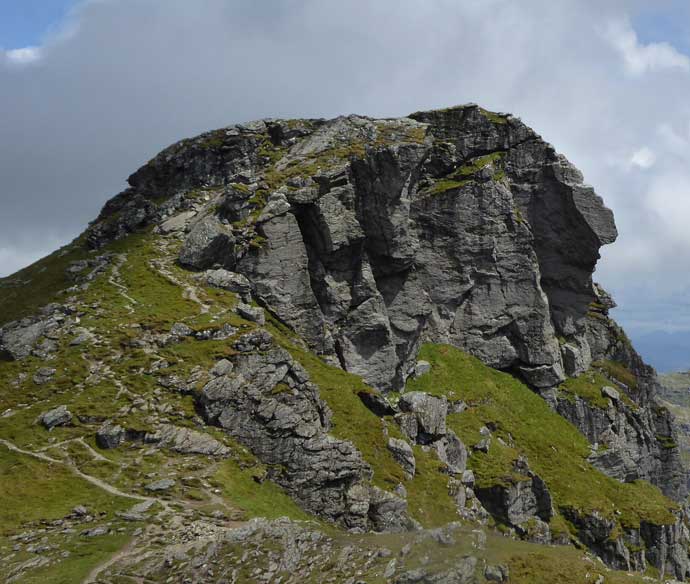 An impressive playground for climbers on the north top crags

Please, where was the escape hatch?

Back at the foot of The Cobbler’s north ridge, I simply turned left, surprising a bus-queue cluster as I strode into apparently pathless territory and headed for a fence-line that should lead me down into Coire Croe and back to the car.
And they were the last souls seen on the hill that day. 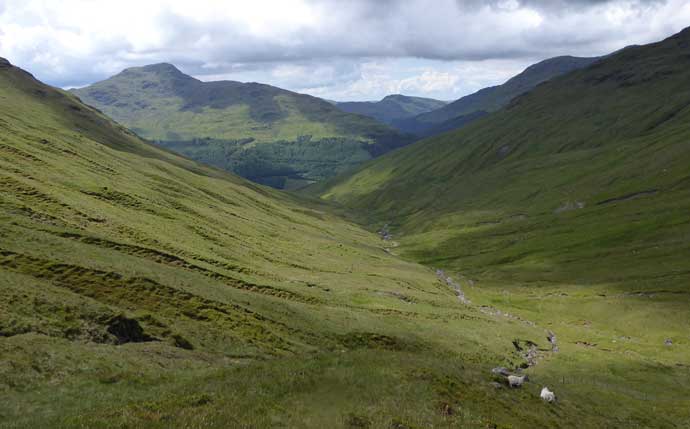 A secluded descent back to Glen Croe

At the small dam I picked up my outward path and descended. The path-side bracken was no longer wet, a breeze was keeping the midges at bay and, with surrounding tops now clear and set against an almost cloudless sky, it was a place to linger and saunter rather than stride ahead. 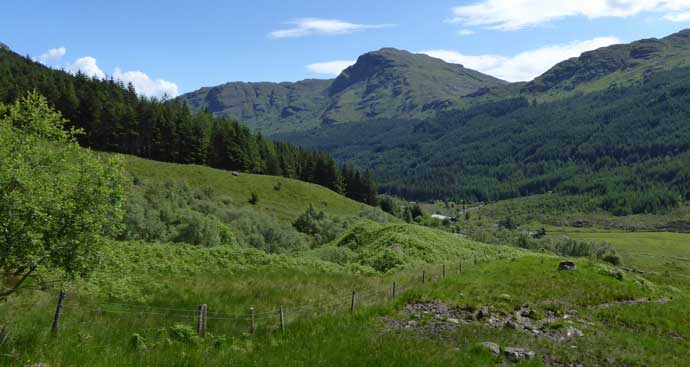 And when I got back to the car, it was still the only one there.