Meikle Bin and Duncarnock by bike

Meikle Bin and Duncarnock by bike

Jackie was working over in Stirling on Saturday morning, so I thought about a wander somewhere in the Ochils. She fancied coming along too, so I wondered what to do first. Why not have a bit of a lie-in and cycle through to Stirling? And a quick scoot up Meikle Bin wouldn't do any harm either.

Last time I had cycled over the Crow Road, Meikle Bin had seemed surprisingly close to the high point, and I had wondered about a quick approach from that side. But since I was heading round to the Carron Reservoir anyway, I thought a cycle up the normal approach and a quick leg up the last bit on foot would suit the grey and showery weather best. 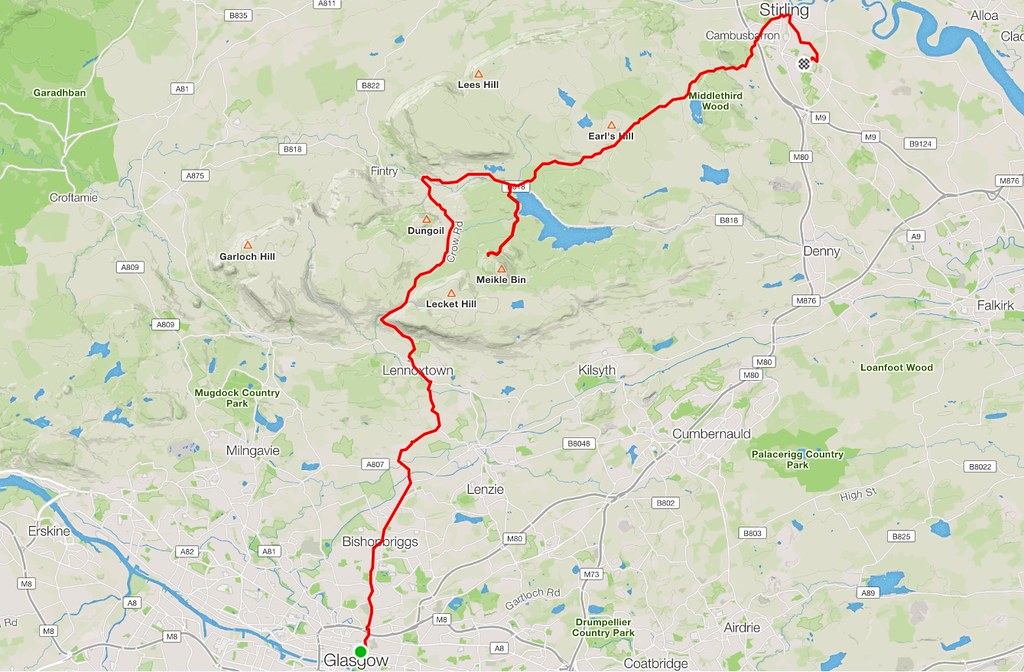 It was grey but dry as I passed out of Glasgow and through Torrance and Lennoxtown, before the big climb up the side of Campsie Glen. A speedy descent to Fintry didn't have the spectacular panorama of the southern highlands that I'd seen on my previous Campsies circuit a few weeks earlier, but was enjoyable nonetheless. Then it was back uphill again past the Loup of Fintry and onto the forestry tracks that wind around the northern slopes of Meikle Bin. 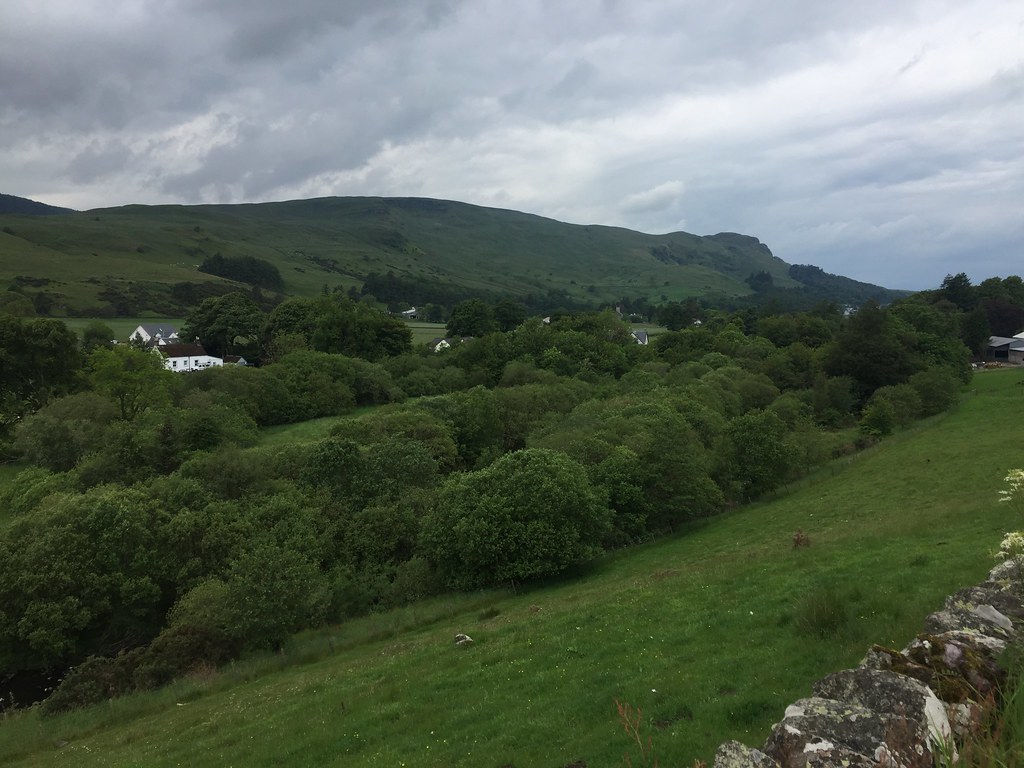 Fintry from the Carron Valley road 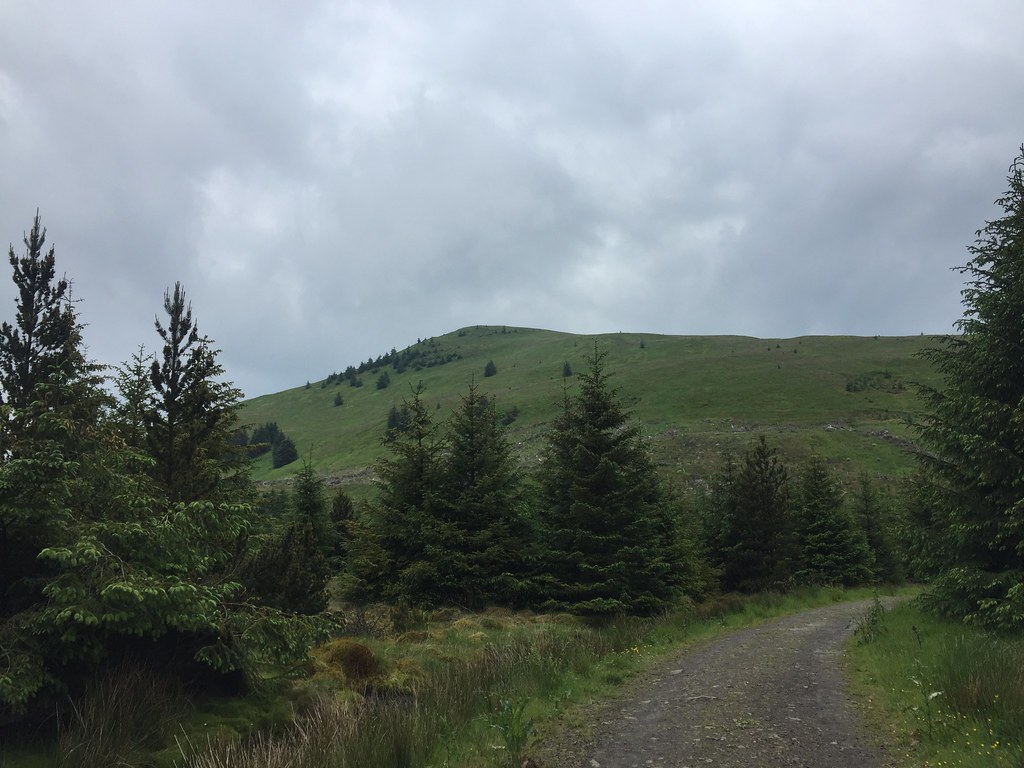 Lower down I saw no-one, but once out into a felled area it became fairly busy, largely with a large group of guys. After locking my bike to a signpost next to the final cone, I passed a large group of female walkers. Other than that, there were a couple of other folk about. 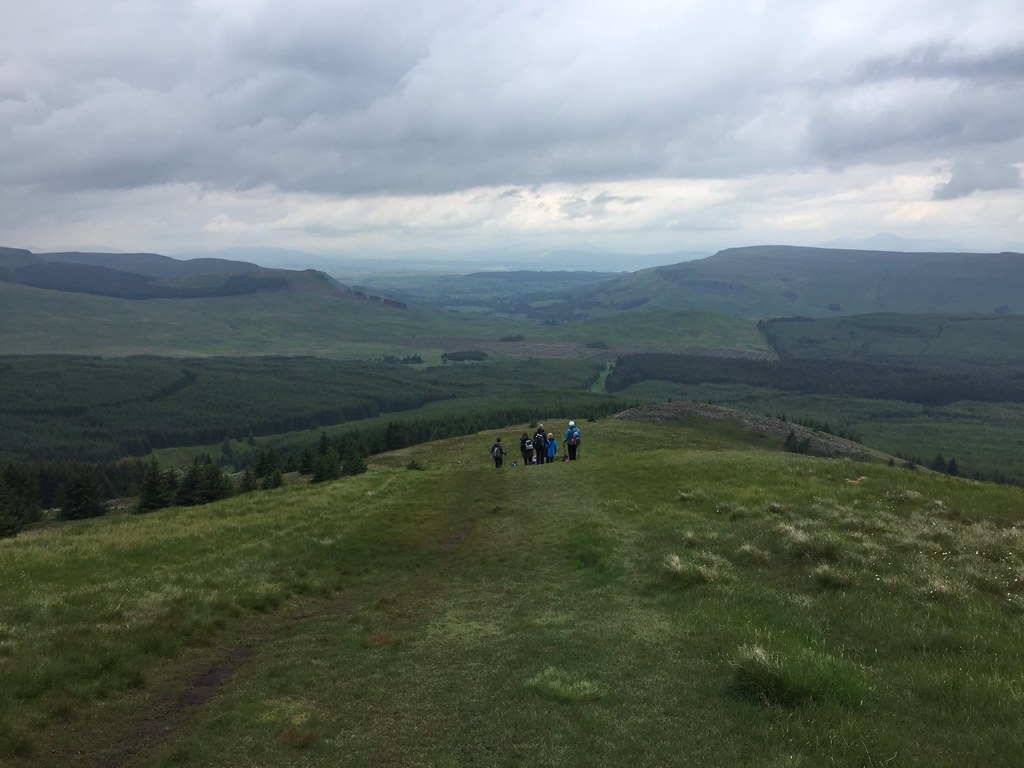 Looking back towards Fintry 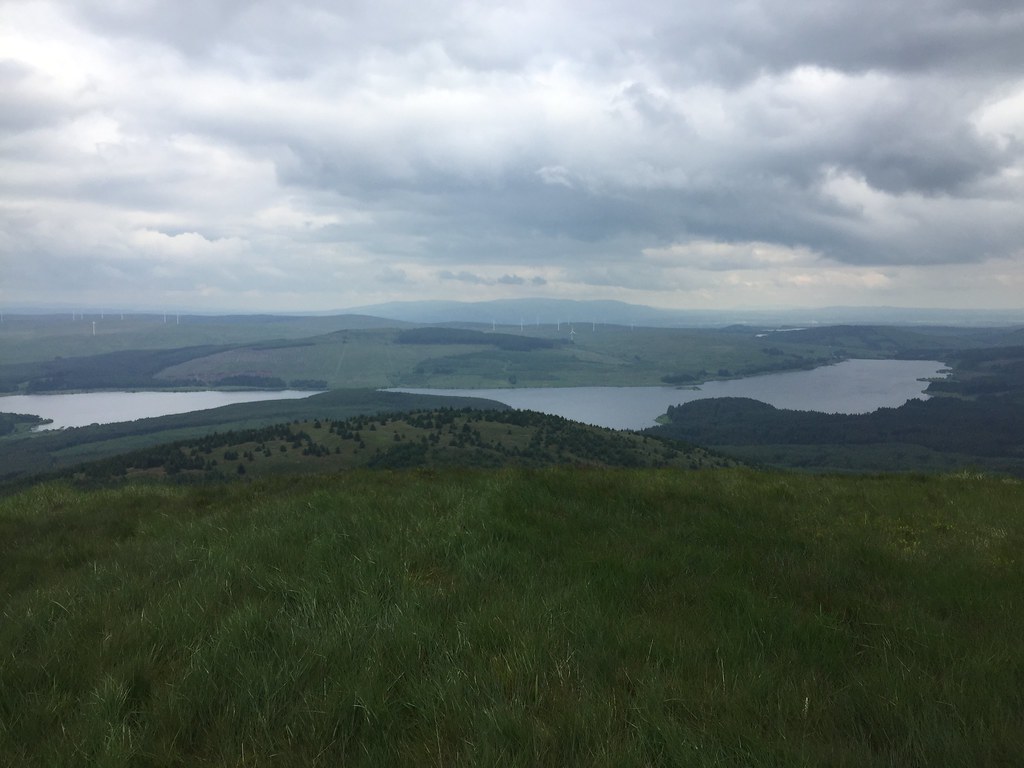 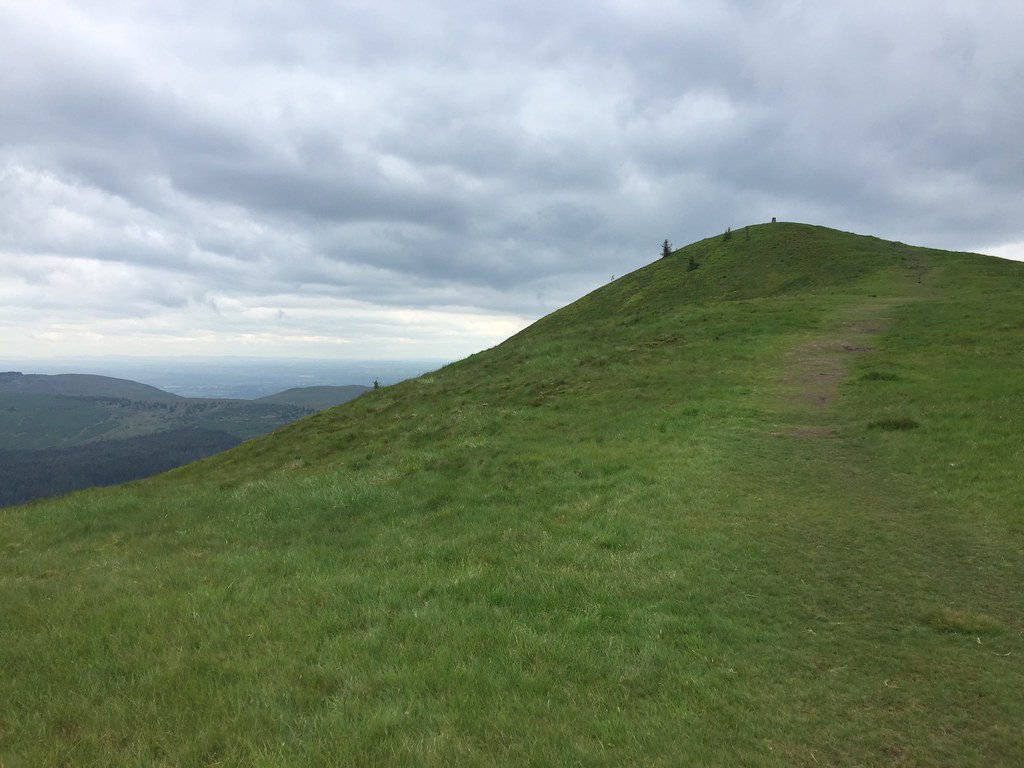 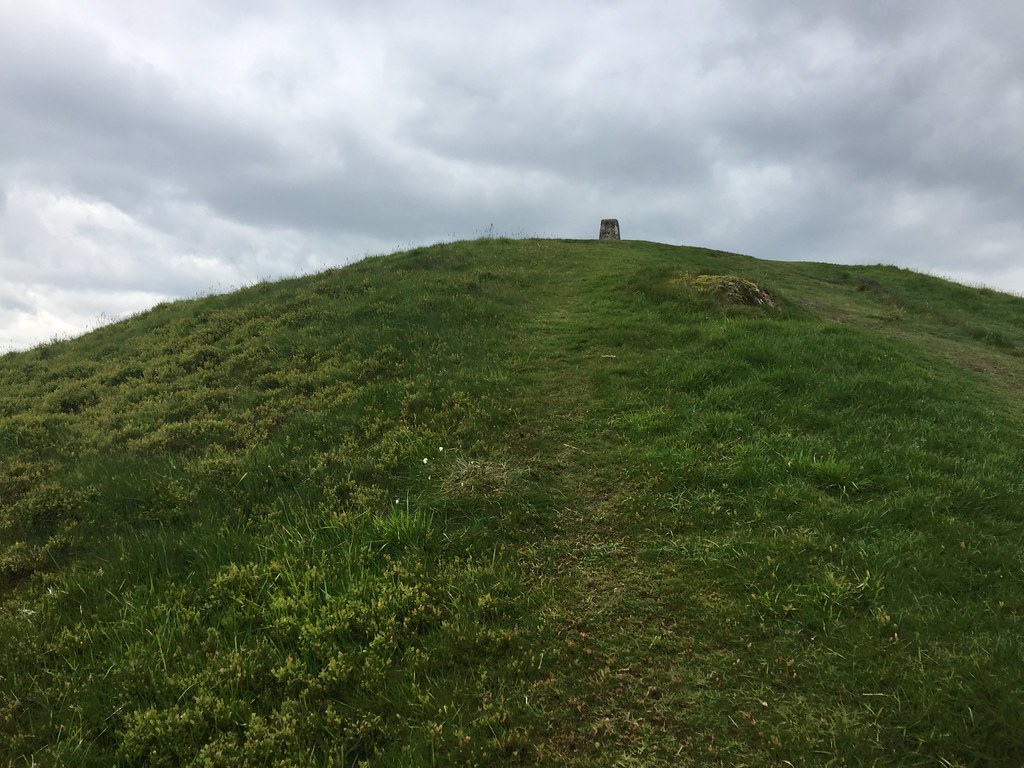 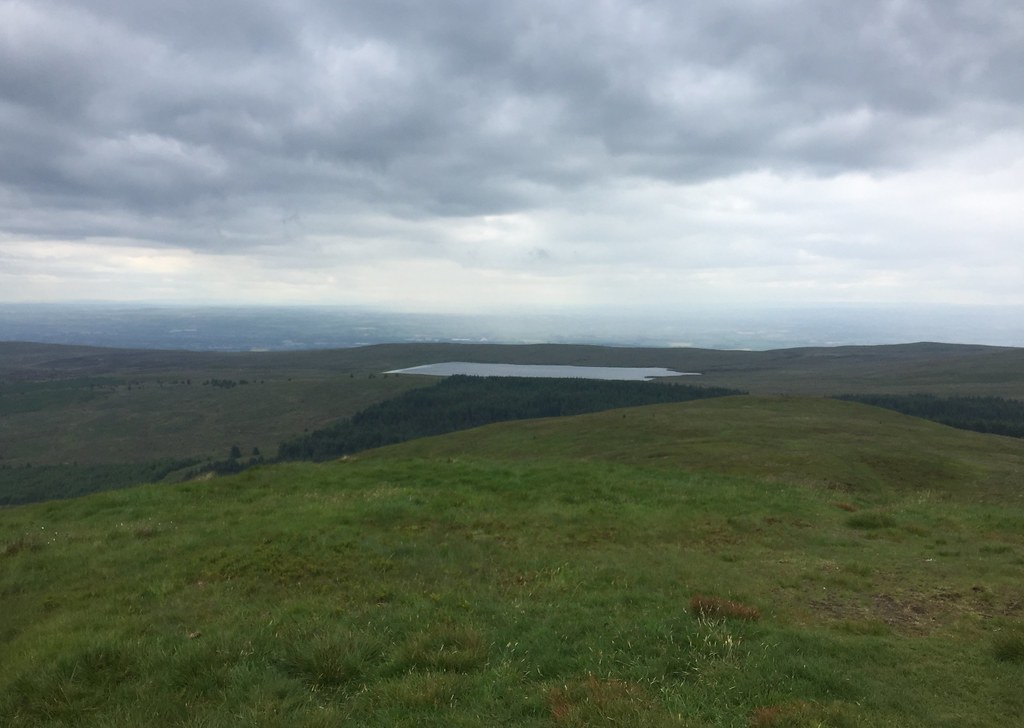 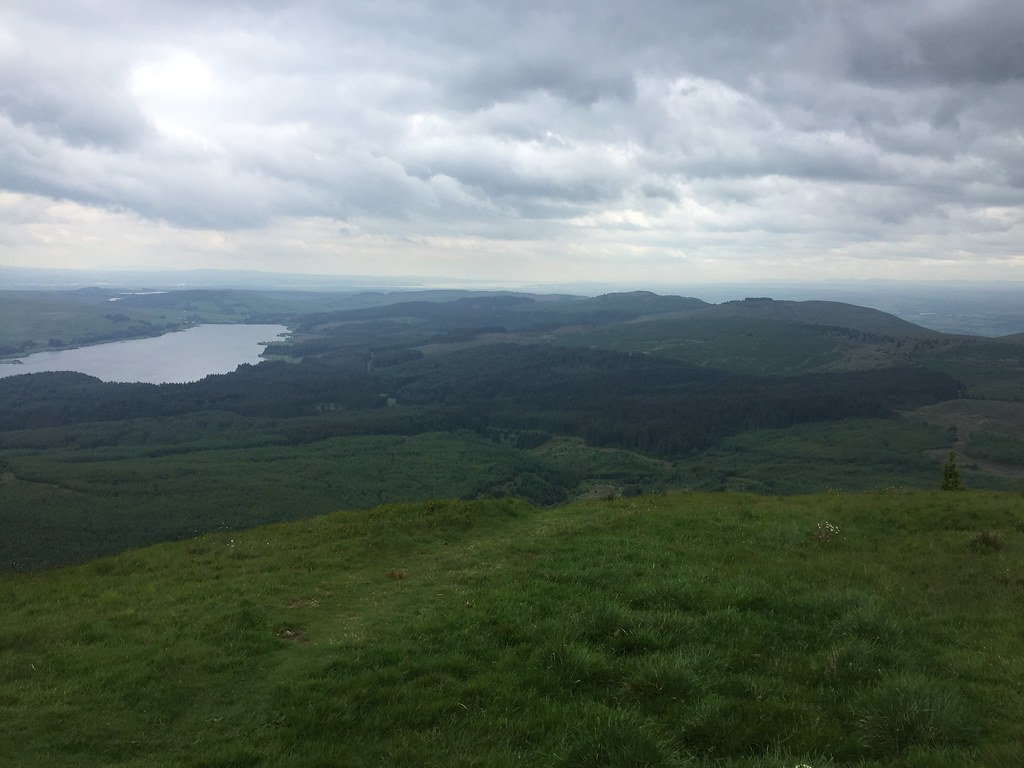 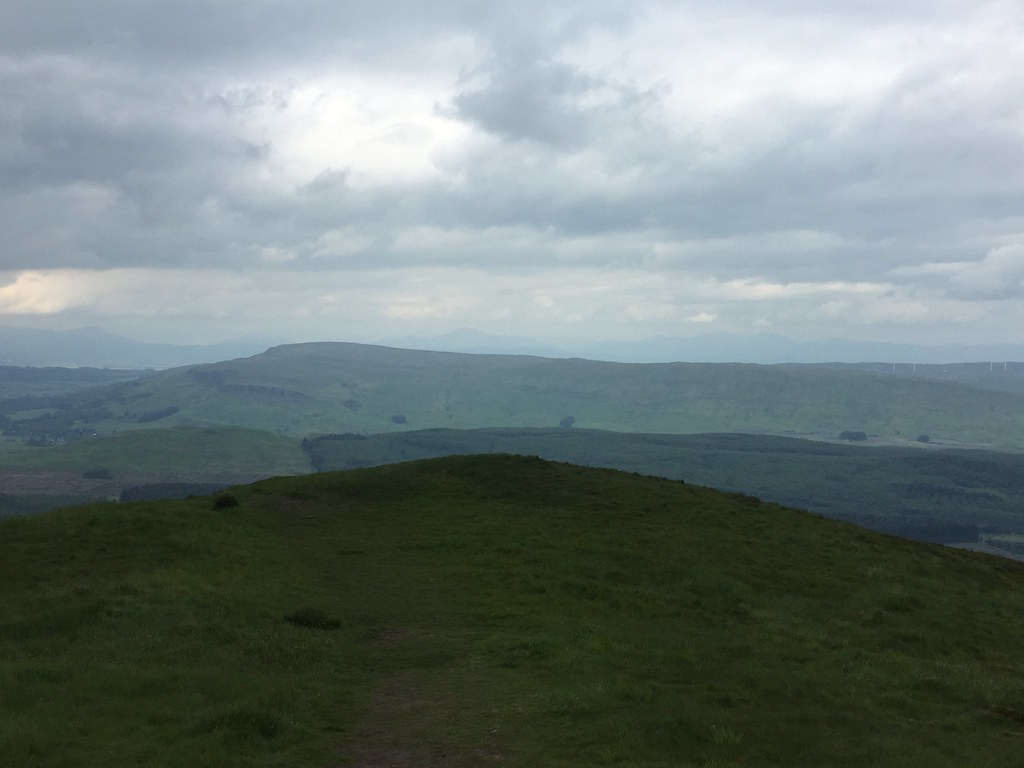 The rain stayed off until a minute or so before I reached my bike, at which point it started bucketing down. The shower stayed with me all the way back to the tarmac, and onward to the minor road cutting across the Gargunnock Hills to Stirling. I took off my jacket when it eased, then suddenly it was **** down again! Fortunately the weather cleared a bit as I approached the high point, and there were views of the Ochils and the interesting reservoirs and crags on the edge of this range. I was glad to see something as I had been keen to cycle over this road for some time. 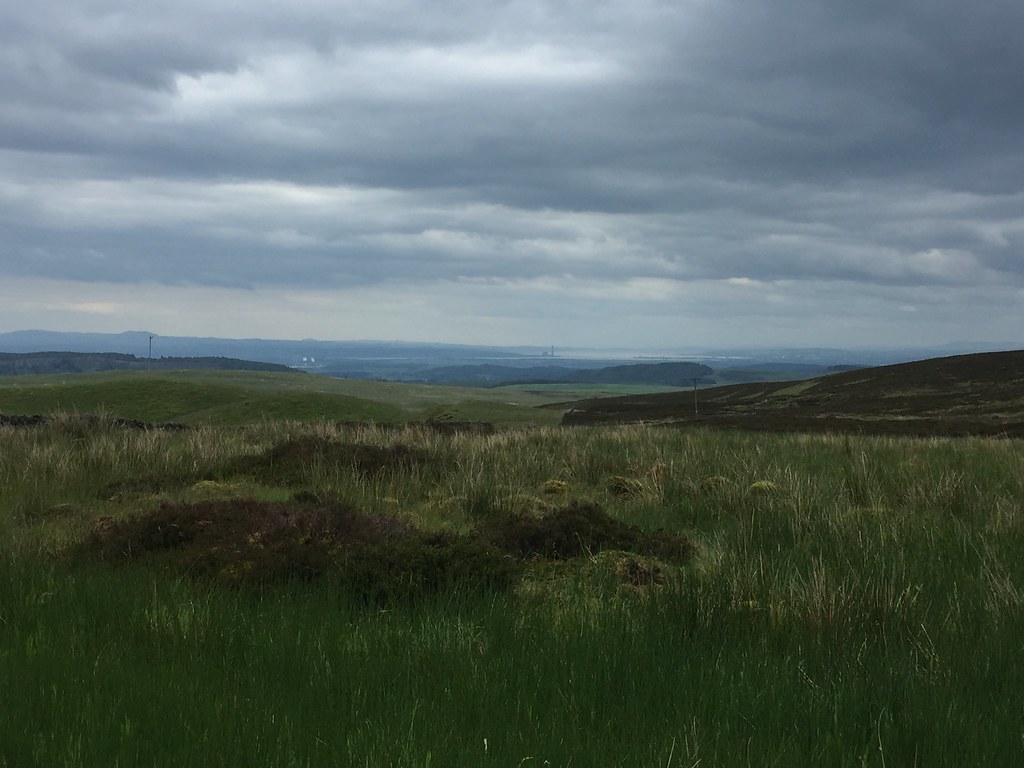 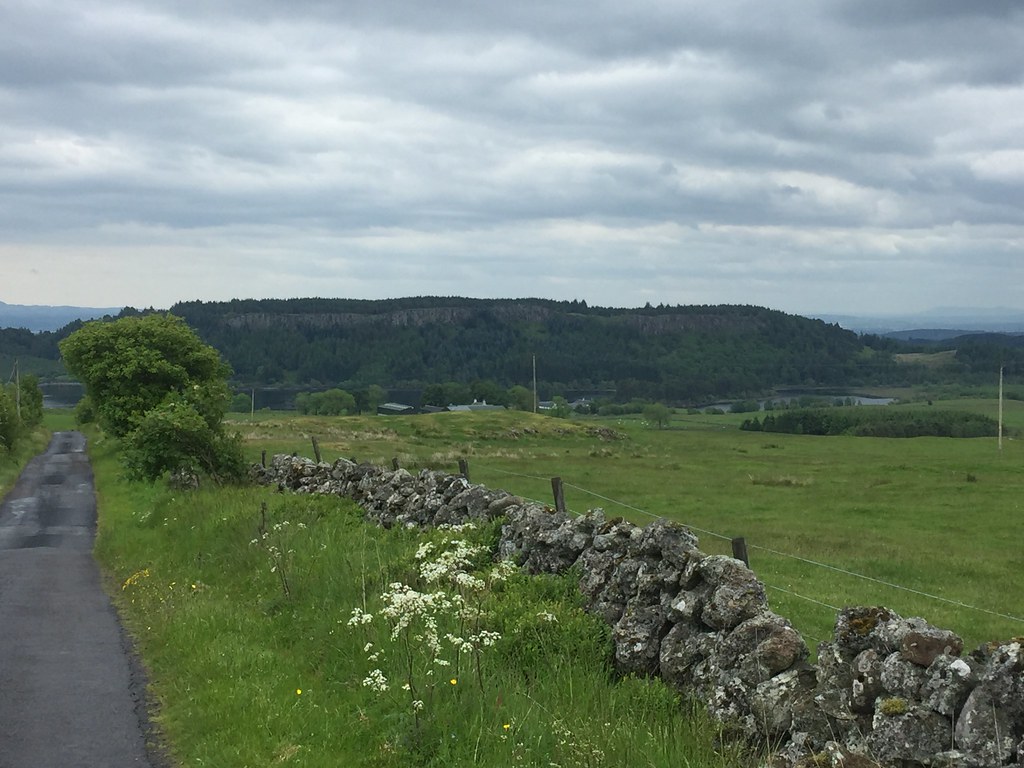 The surface was rough but until a couple of miles out of town, there was no other traffic. I meandered around Stirling and found my way out to Bannockburn as Jackie was finishing up work.She was knackered, and another large shower hit at this point, so we just decided to head back to Glasgow instead of going up any hills 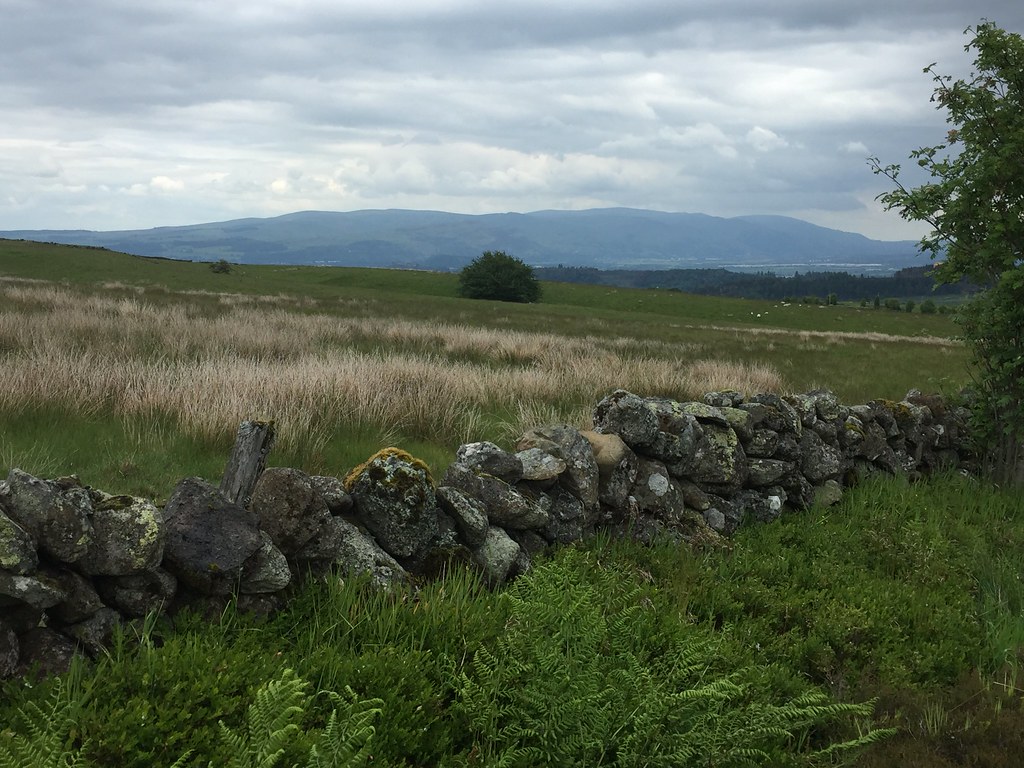 The weather in Glasgow was much better than further east for once, so later in the afternoon, we set out on the bikes again in search of Duncarnock. This hill, hidden away behind Barrhead, is quite striking but practically impossible to spot on the map as it is so small. We toiled up the A77 to Newton Mearns, only having to stop at one toilet for Jackie to pee

. After meandering around some minor roads for a short while, there it was. 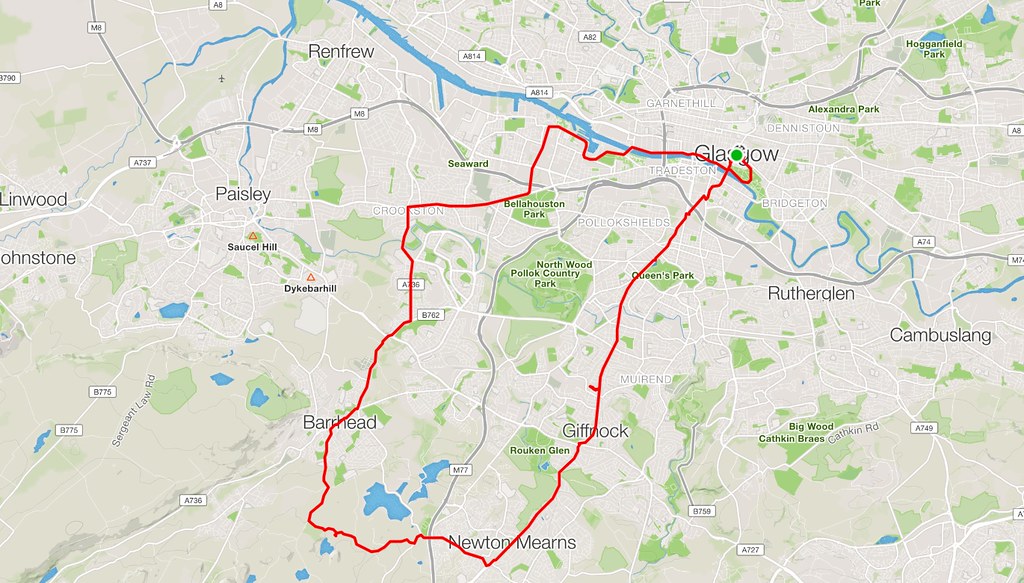 
Dun map.gpx Open full screen  NB: Walkhighlands is not responsible for the accuracy of gpx files in users posts 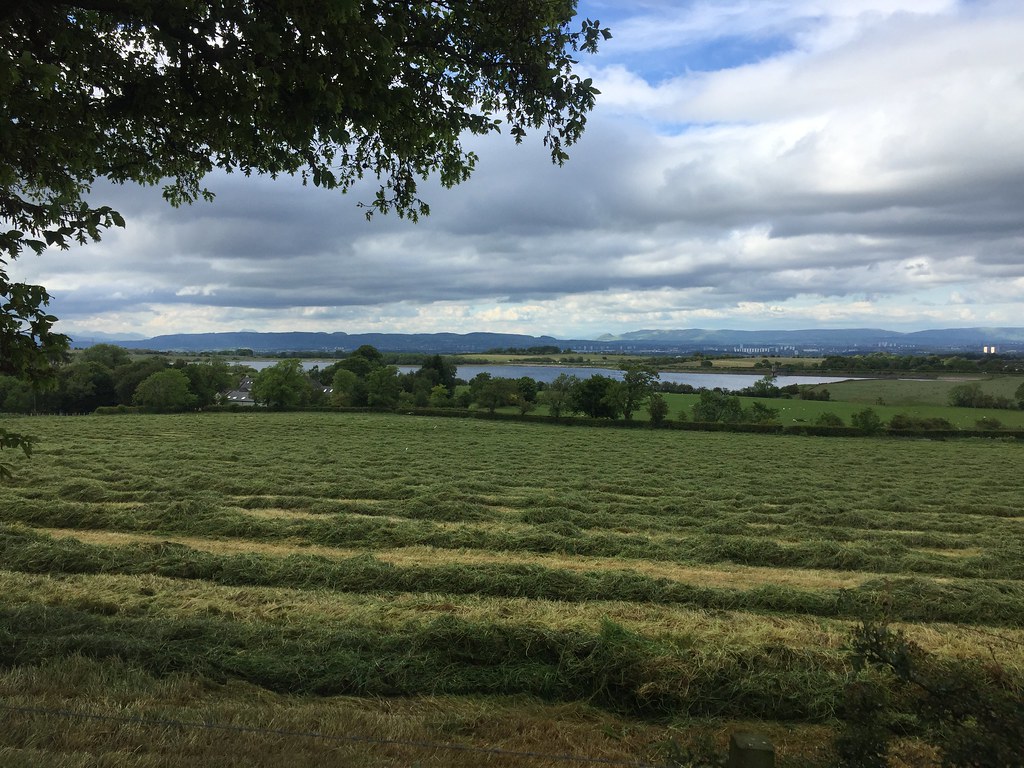 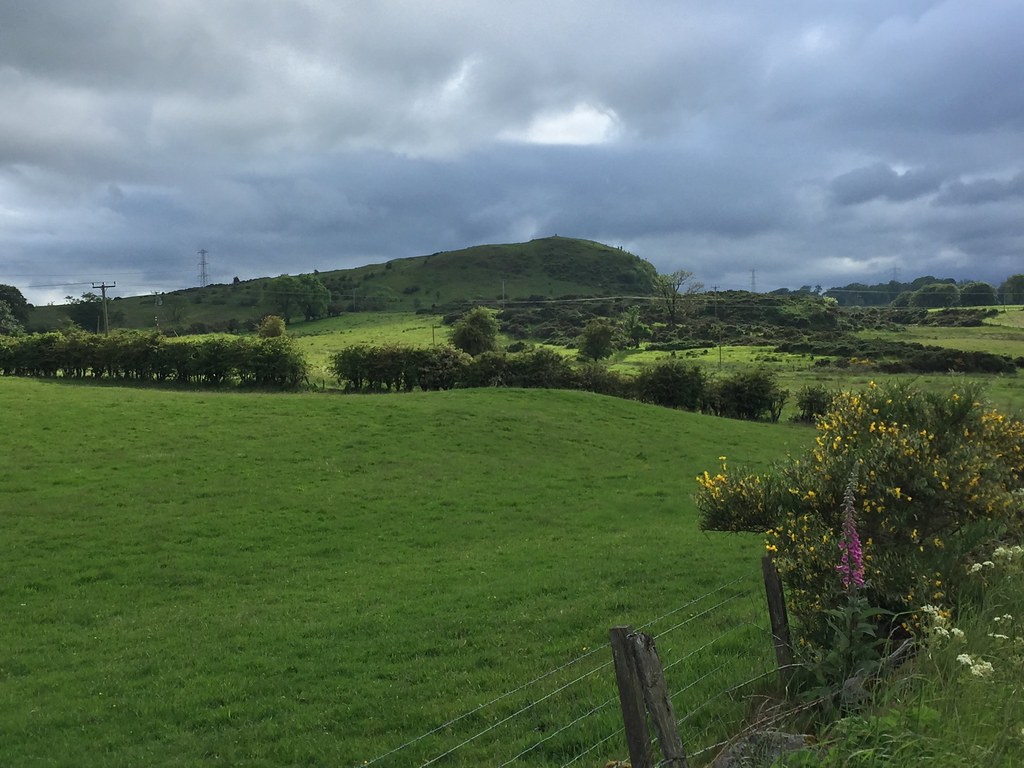 Although tiny, the cone of Duncarnock is very steep. We had to wander through a couple of fields of cows and past the corner of Glanderston Reservoir to get to it. Then steeply up, but not for long! 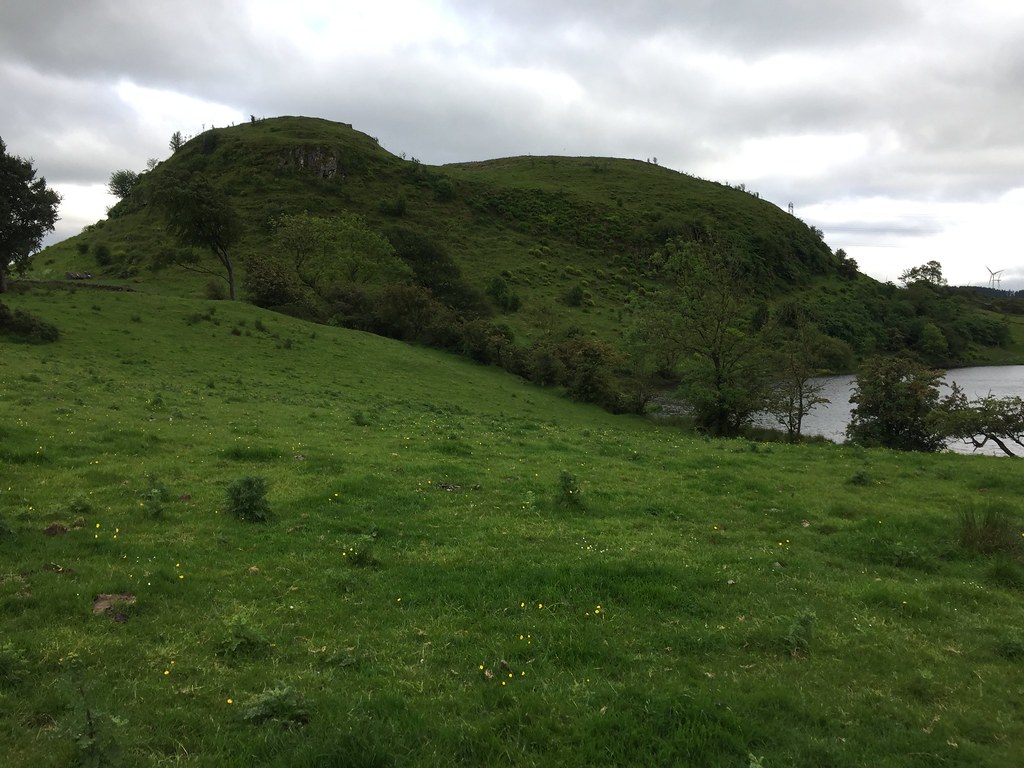 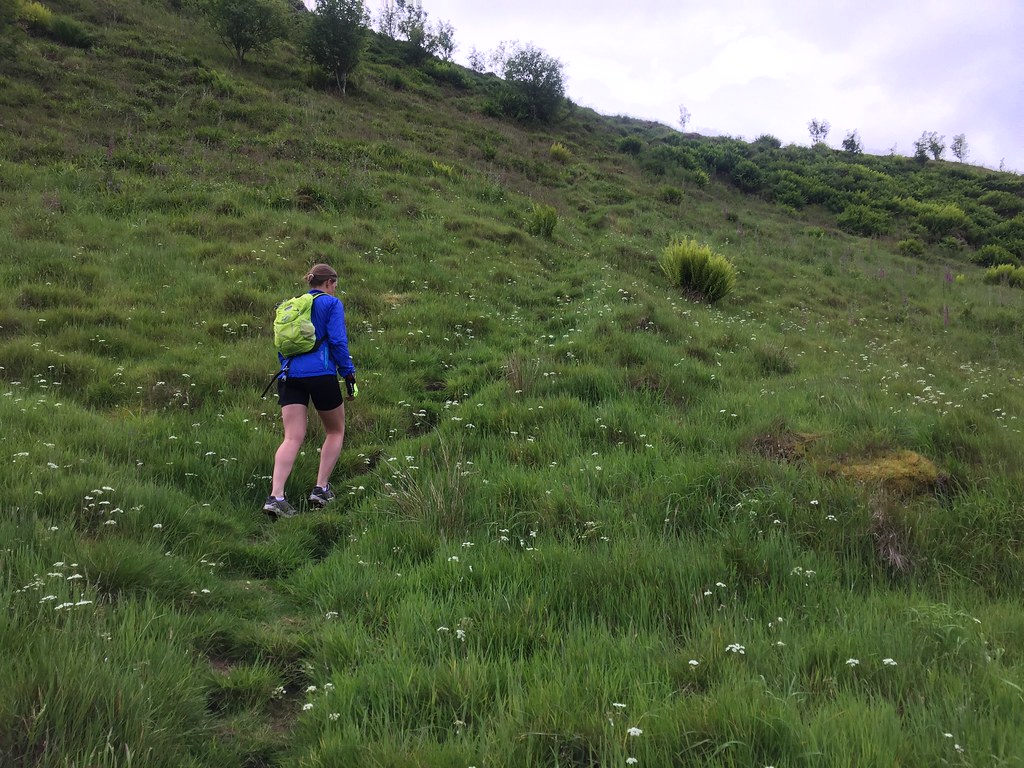 As with most high points to the south of Glasgow, there is a good range of Lomond and Clyde hills on view. We took a slightly more circuitous, less steep route back to the bikes. 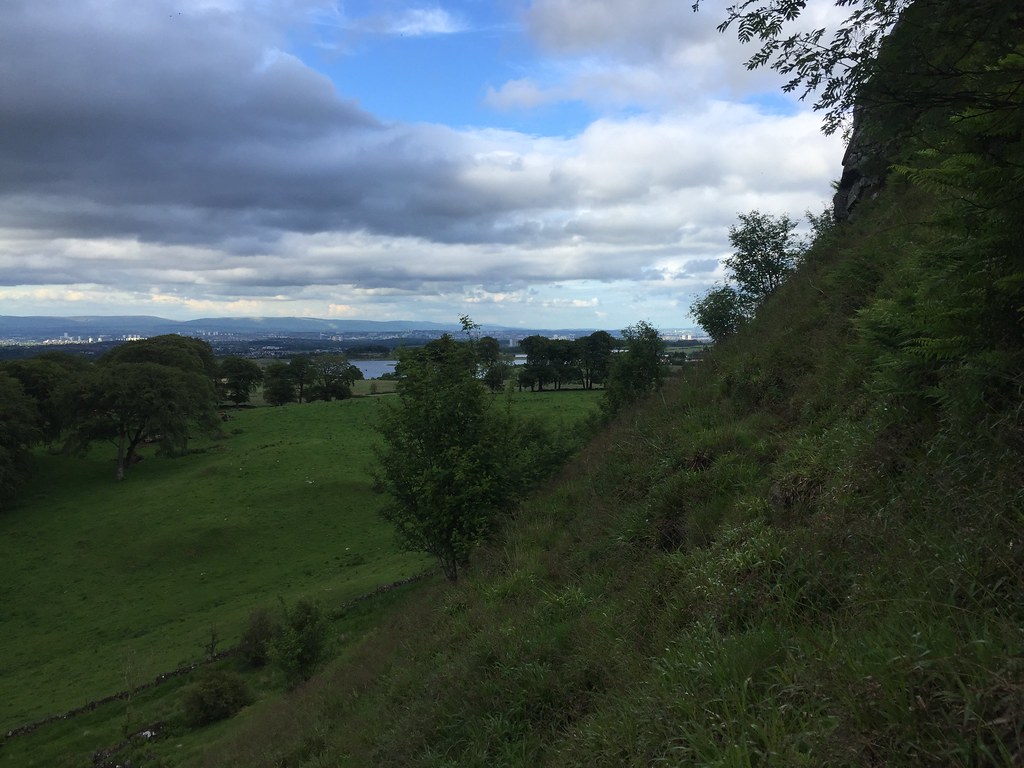 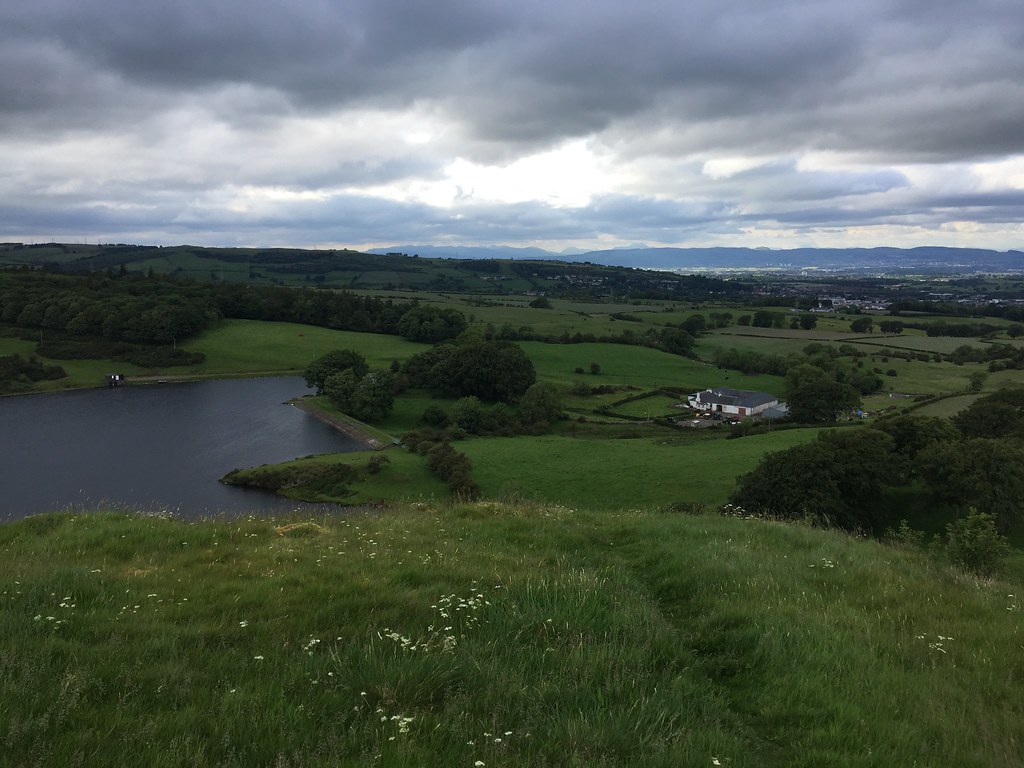 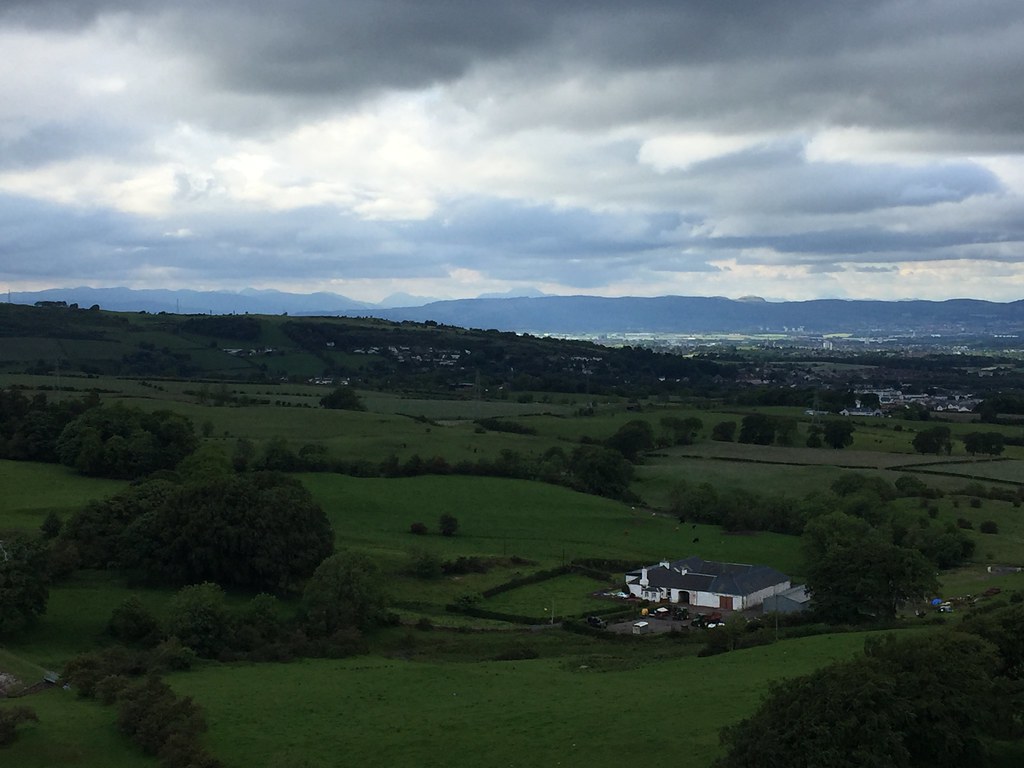 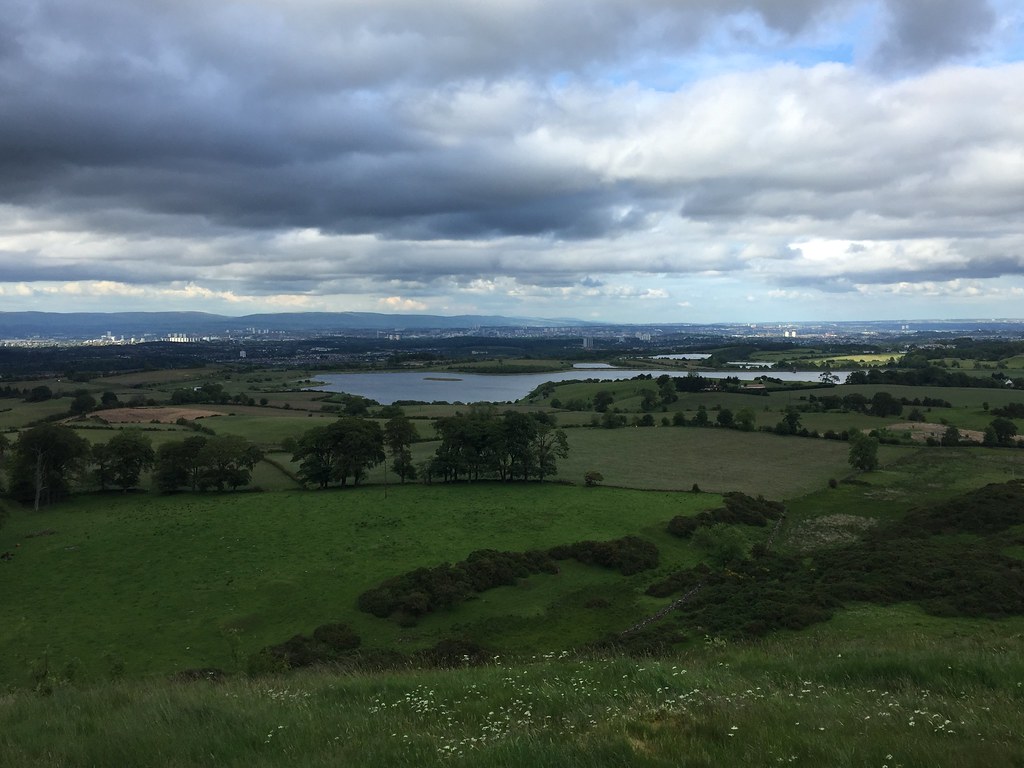 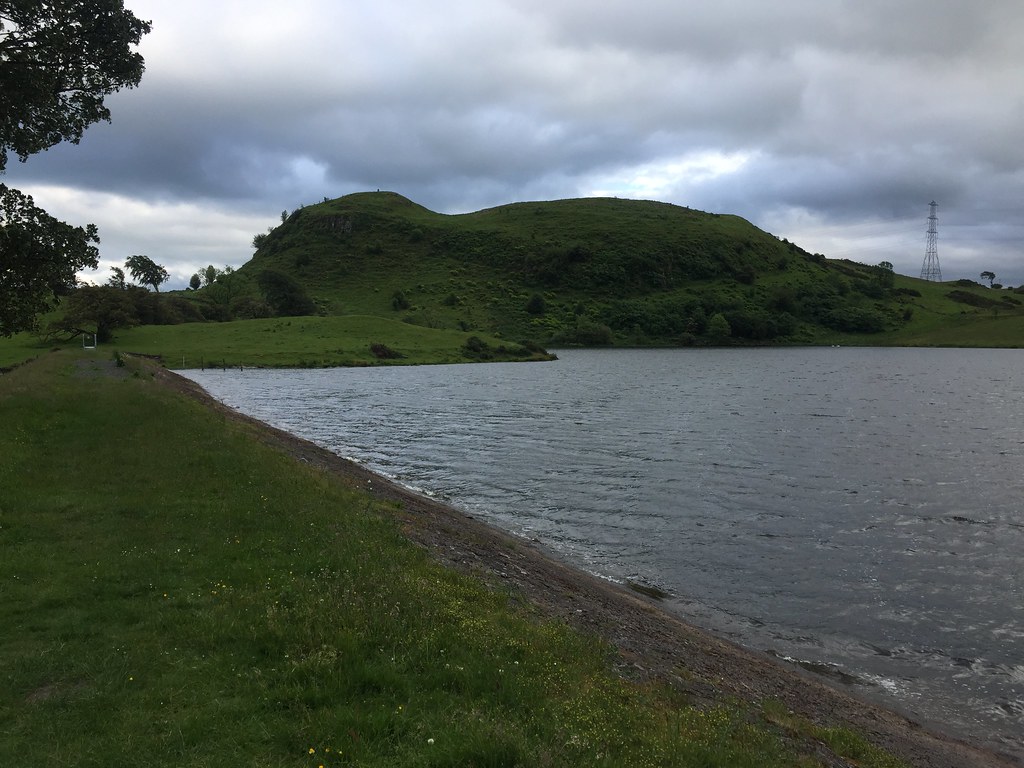 Time to head back to Glasgow for dinner. We dropped down into Barrhead then found some of the worst tarmac in the Central Belt (some good competition around) to take us home. A reasonable day out cobbled together from some scraps.