We have gradually been becoming fair weather walkers but with no fair weather on the horizon we chose to walk up Beinn an Eoin in not too awful weather. I am so glad we did because despite the showers and wind we had one of our best hill days. A day of excitement views and challenges that we never anticipated as we set out at 8:45 from the Green Barn, intending to take the most straight forward there and back route to Beinn an Eoin summit. The route wasn't quite as expected either. 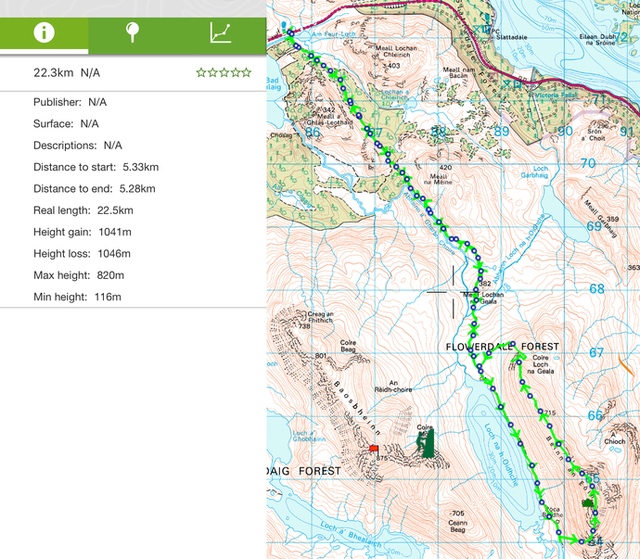 The walk in to Beinn an Eoin is along a good path, initially through newly planted woodland, and then moorland. The bell heather and cross leaved heath were in blooming in the verges. Ahead Meall na Meine remained visible and the cloud would momentarily lift giving tantalising glimpses of the higher tops beyond before enveloping them again. 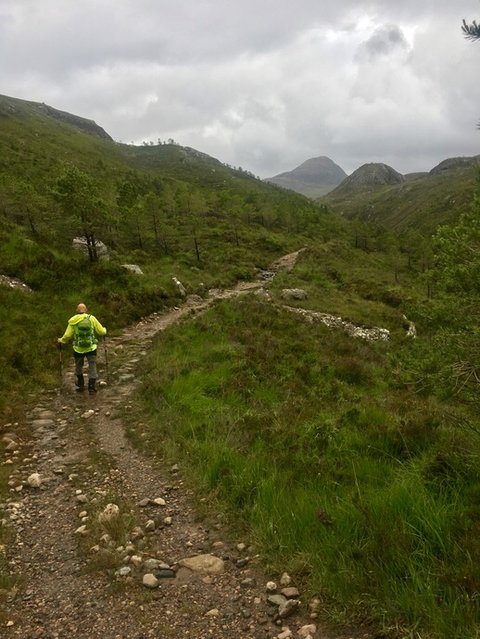 An early glimpse of Beinn an Eoin

The loud calls of a golden plover drew our attention to a large bird of prey as it surveyed the moorland from on high, flying effortlessly, quartering the ground, seemingly pursued by the plover which appeared minuscule in comparison. For the first time in the hills I felt convinced I was looking at a golden eagle, in hindsight it may have been a buzzard, but whichever it was it certainly had a presence and gave us quite a show before gliding away as silently as it had arrived. 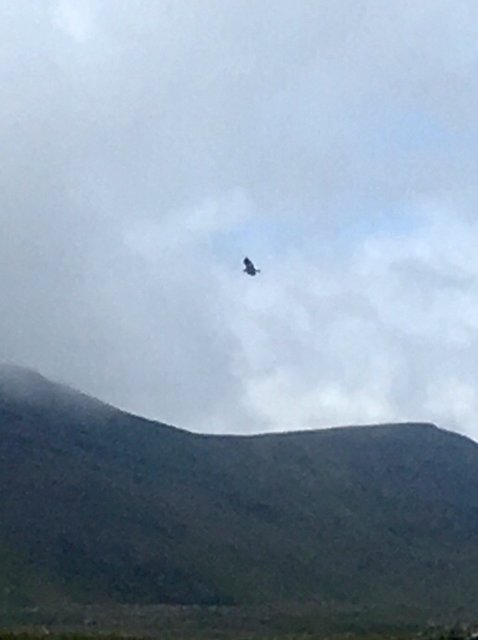 Rather than take the short cut to Beinn an Eoin it seemed a nice idea to visit Loch na h-Oidhche, and whilst there see if we spot a scramble on Baosbheinn that we planned to do one sunny day. There were some nice sandy beaches on the Loch shore and all the the Torridon Giants were brooding in the background. 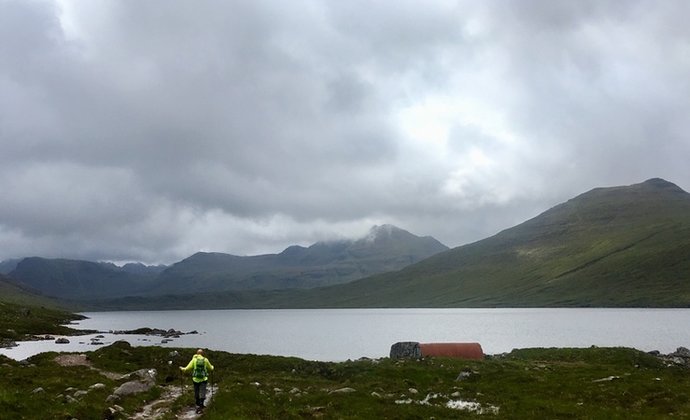 Our original plan for Beinn an Eoin was to walk along the Loch and ascend its rocky south end. We had abandoned this idea in response to the weather forecast but the rain which was forecast for the morning had not materialised so we decided to revive our earlier plan. The best laid plans of mice and men

As we reached the end of the Loch the skies opened! Having come so far we decided to continue round to the south end and see what happened. It continued to rain so rather than ascend the nose we started to make our way up slightly to the side on steep grass. 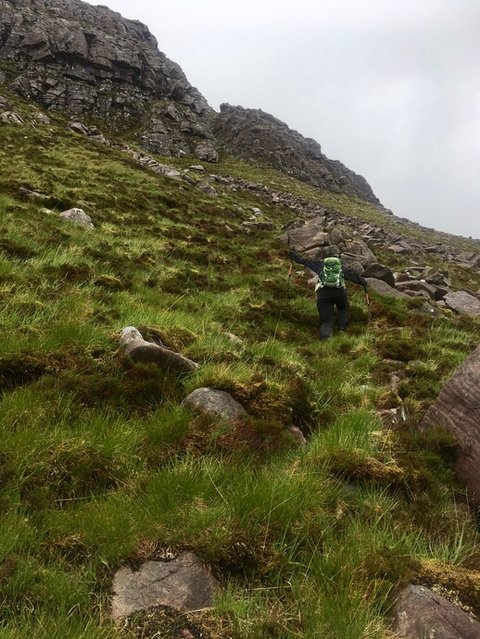 As we reached a large crag the rain stopped so rather than continue on the grass we decided to head up a steep gully and from there get on onto the ridge. 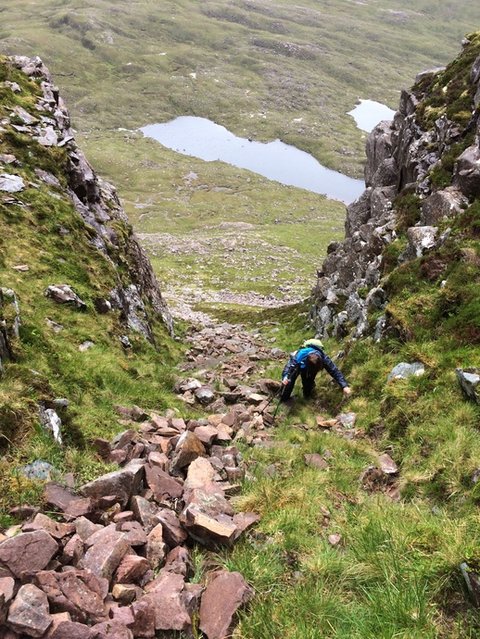 Just before the gully became uncomfortably steep we were able to exit onto a grassy ledge and make our way around to the side of the ridge. 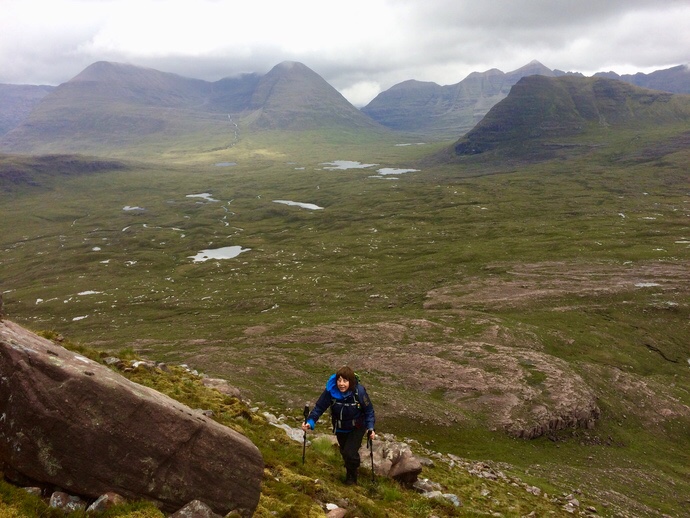 I have looked across at Beinn an Eoin and Baosbheinn from Beinn Dearg and Beinn Eighe, it made a change to be doing it the other way round.
From the ledge we were looking directly at Rhuadh-Stac Mor and into Coire Mhic Fhearchair. 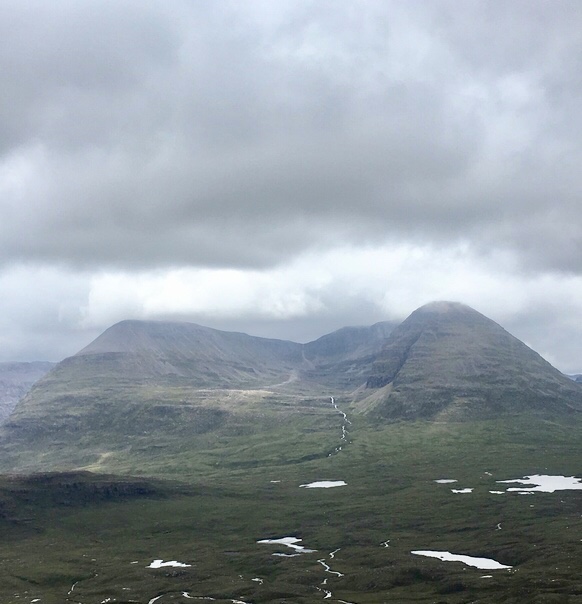 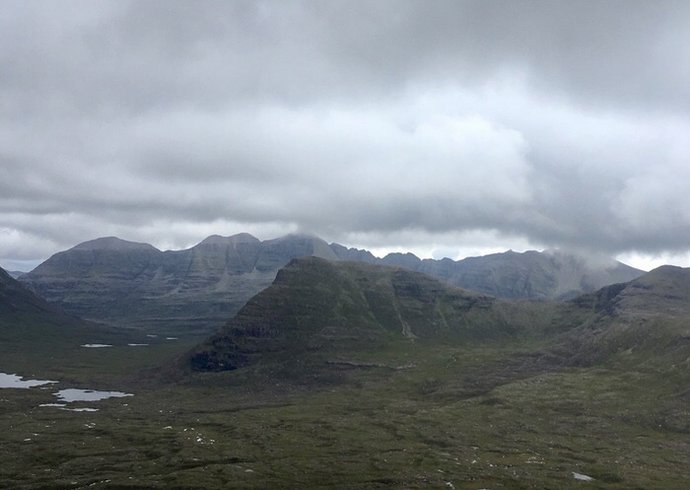 Climbing up the side of the ridge felt exposed and involved a tricky boulder hugging moment, but despite the rain, most of the rock was still dry. 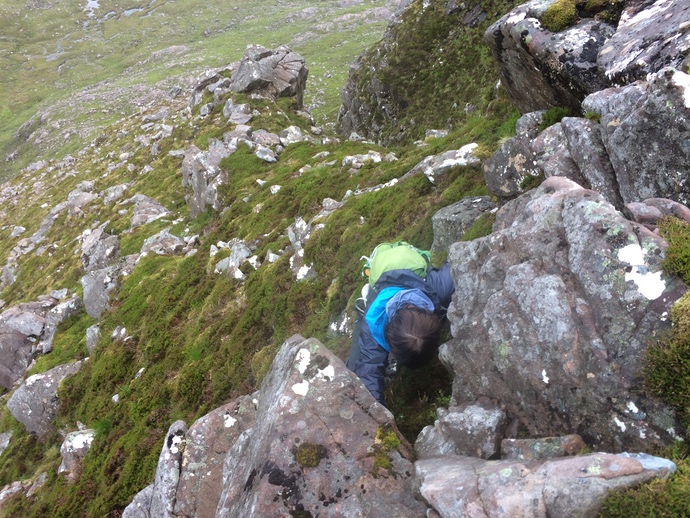 Trying to reach the ridge

and after that there was some delightful scrambling on very grippy sandstone. 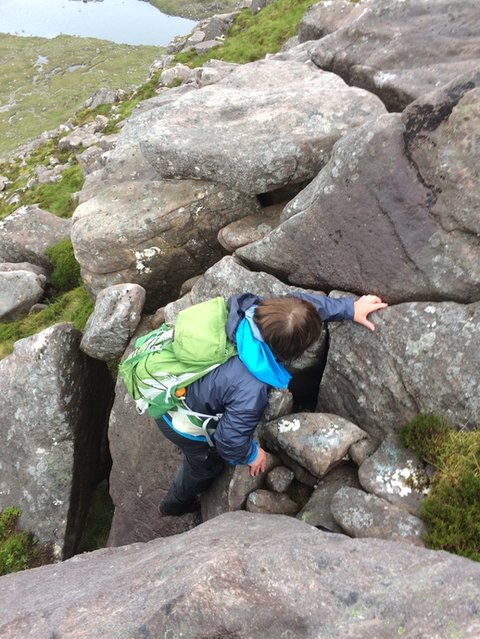 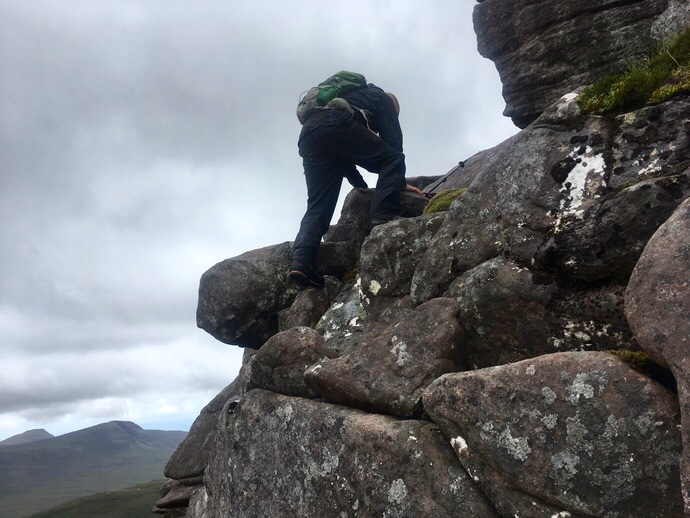 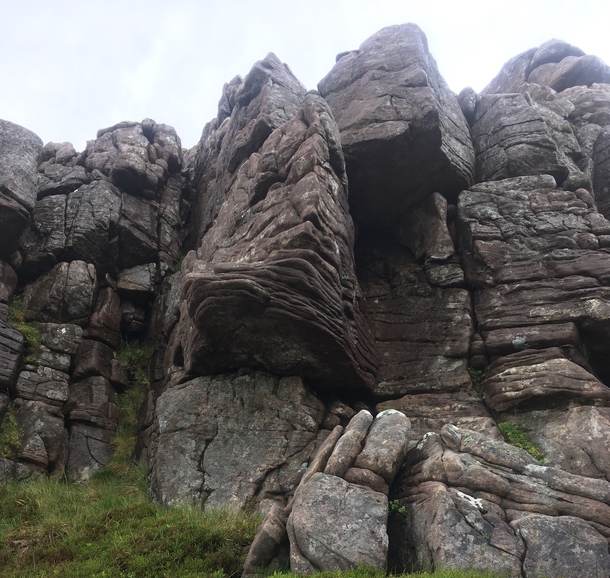 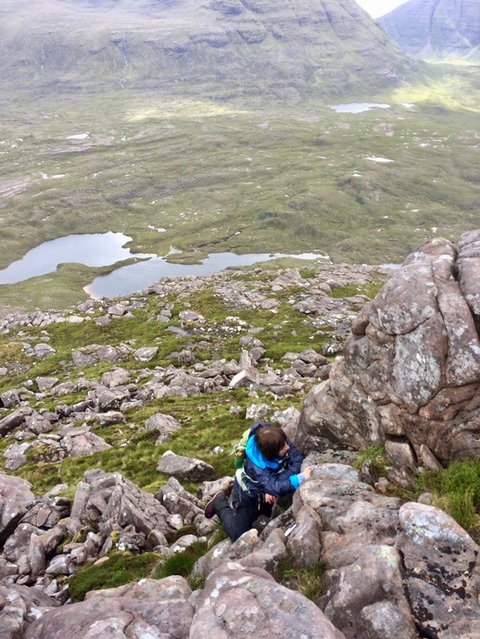 We found a perfect ledge to stop for lunch, with great views of Beinn Alligin but the minute we sat down the wind came up and the clouds dropped. We spent lunch watching the cloud swirling beneath us. It was lucky Jeremy Jetboil was wearing his windshield. 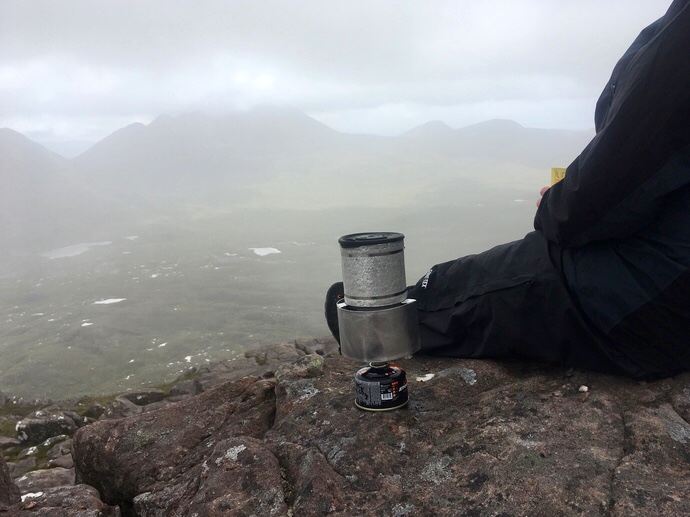 13:45 Lunch and an outline of Beinn Alligin

One final tower to climb before the summit. 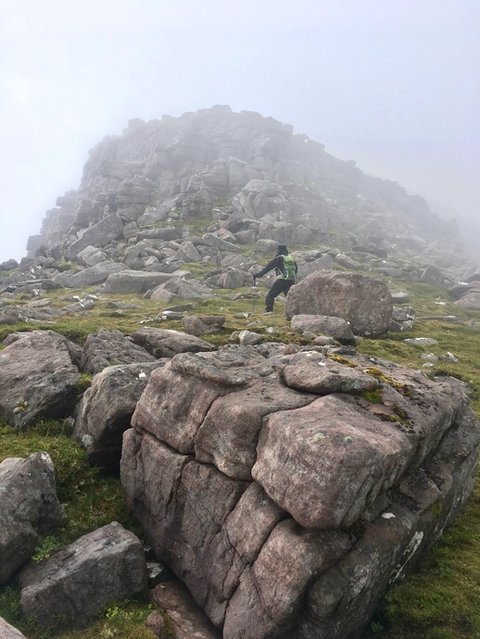 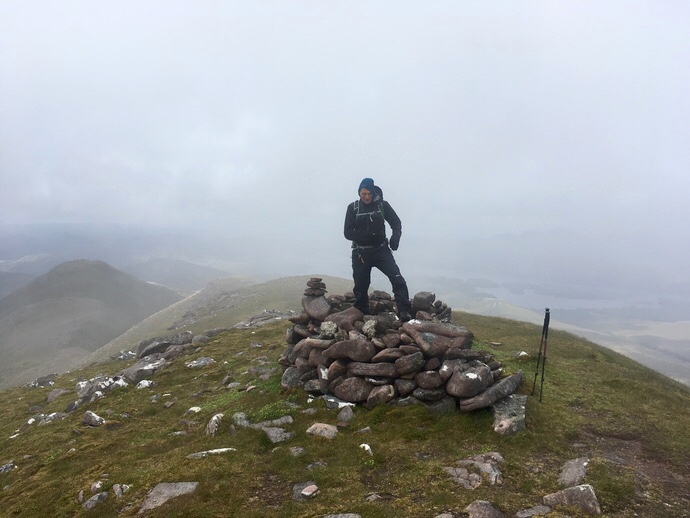 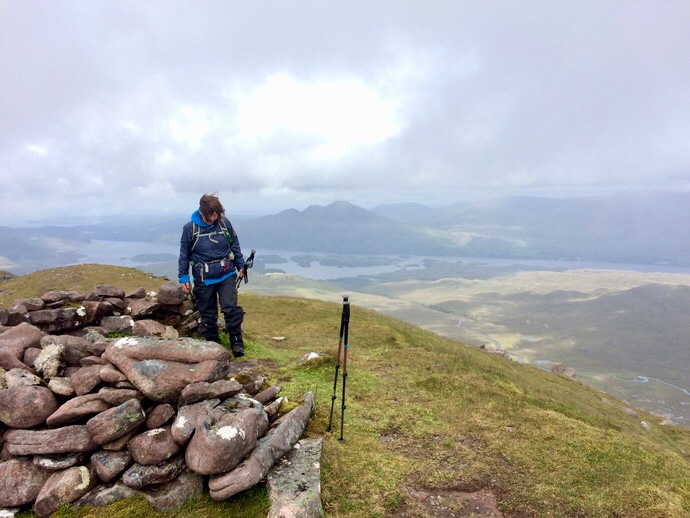 A bit windy on the summit


The summit shelter was quite luxurious, carpeted with Alpine Ladies Mantle, it would have been a good place to hunker down, if you needed too.
It felt invigorating to be out in the wind and rain as we walked across the undulating top. My other half noted that it had been a while since he had enjoyed the sensation of his snot flying past his face

. Despite the clouds there were still some superb views, especially across Loch Maree. 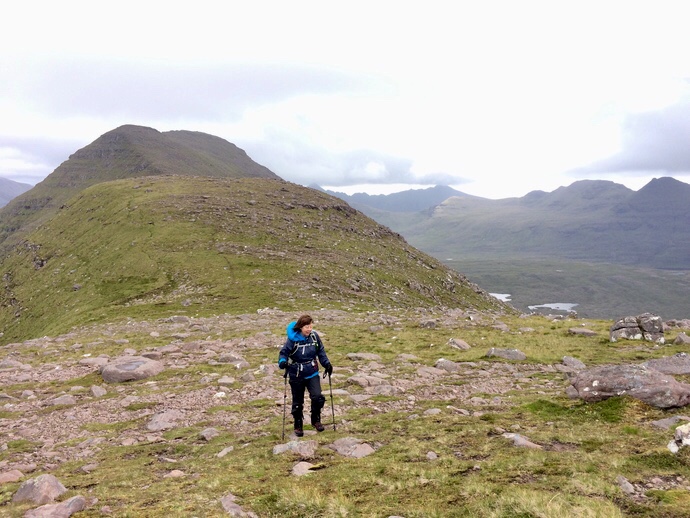 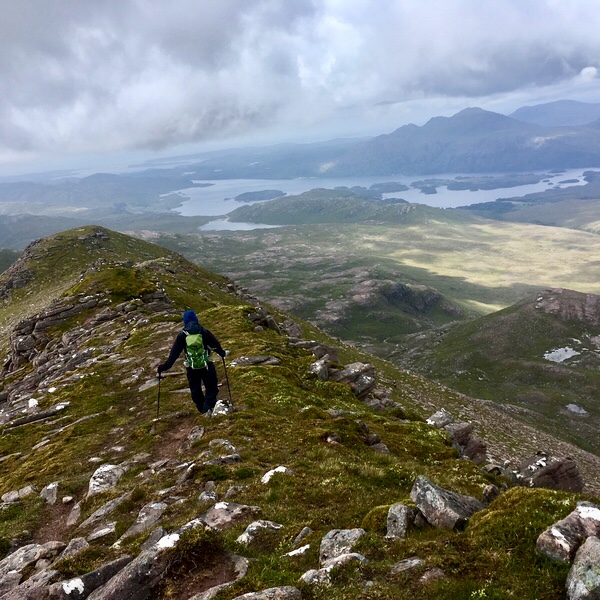 About half way along we met a mountain hare, although he did not like us much, I hope we hadn't completely spoilt his day. 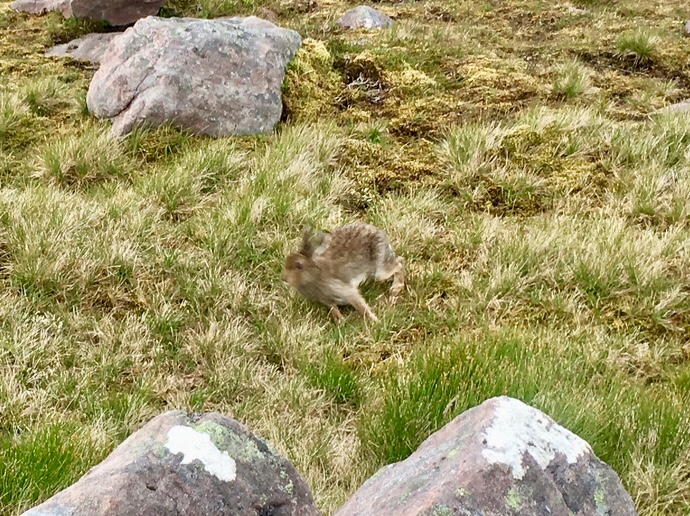 There was an abundance of wild flowers including several large patches of mountain everlasting, although it was sadly past its best.
All too quickly ((all though very slowly by many walkers standards) we had reached the north top and it was time to make our descent. We decided to see how far we could pick our way down the nose. 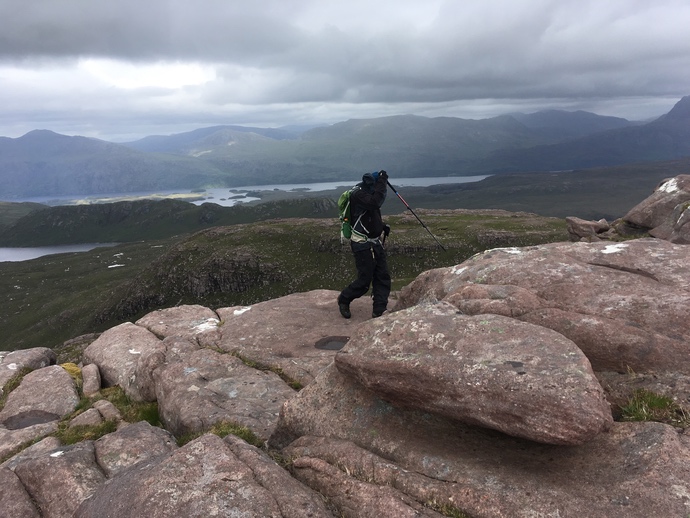 Sandstone slabs on the North End of Beinn an Eoin 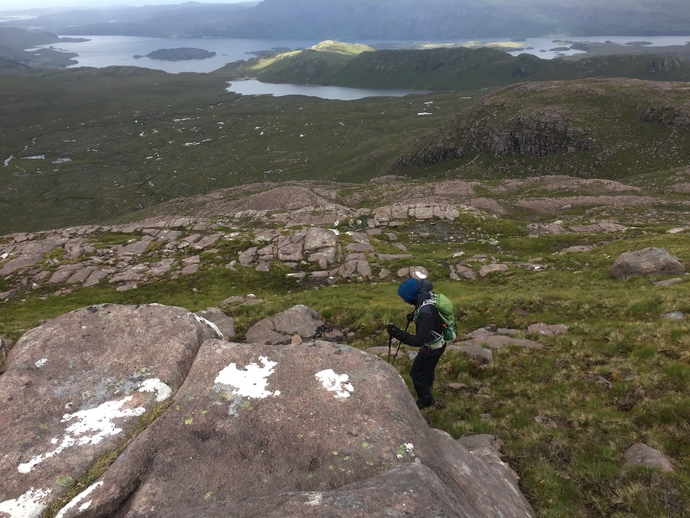 Looking down the North Nose.

From the Loch we had seen a grassy ramp that would make an escape route if/when the end became too steep, and there was also the gully on the eastern side.
The large sandstone shelves were divided by short steep crags that we were able to zig zag down until we reached a shelve with no obvious descent. The easiest way off the shelve was back up a short very slippery muddy, heathery gully. It was only two moves but I could not get any purchase on the mud, or a good grip on the rock to the side. I was feeling reluctant to pull on heather in such an exposed situation, (images of my small heather plants in the garden with their stems broken by birds came to mind) but with every second wasted I was sinking further. I needed to move. 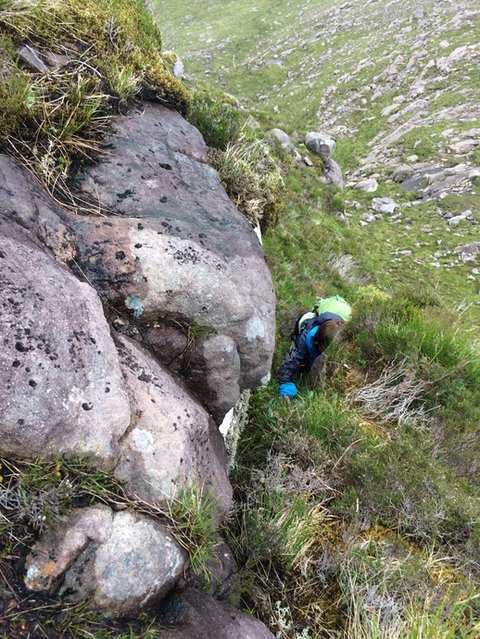 What was all the fuss about!

My other half, who after a couple of false starts had easily reached the top, leant down with a helping hand, that I was extremely grateful to grab and with a couple of steps was out of difficulty and breathing a huge sigh of relief! With my feet on solid ground the mouse chorus in my rucksack could stop squeaking!
We had to walk up a short way before crossing into the wide gully and for an easier descent down the grassy slopes. 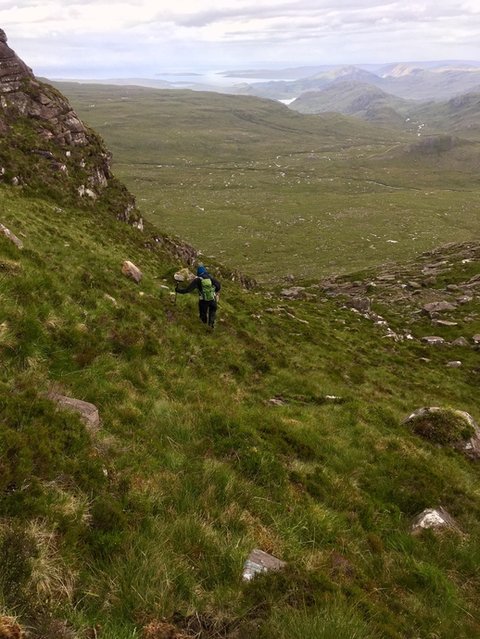 A tramp across the boggy moorland led back to the path and where we stopped for a drink and some fruit and nut before the walk out.
I was looking round hopefully for eagles but were no more large birds to be seen although the Golden Plovers were still around and calling noisily and there was a colourful great sundew growing by the side of the path.
It was 19:00, when we crossing the bridge to the road reminiscing about the days surprises and wondering if we should be less picky about the weather in future.