This is an excellent full-day walk from Broadford village – though if you had a car you’d probably drive out to the end of the old Corry Road. The 18km and 9 hours is from the village.

It was a warm dry day in May. Our B&B hosts (the lovely Rob and Yvonne at Dunedin) told us there was a path that would save us walking along the A87 out of town. We happily trotted up this forest path, parallel to the road but safe and much quieter, and when it came to an end we walked along the noisy A road, expecting to find a turning on our left. After a few hundred yards we reached the surprisingly municipal cemetery. There was no sign of a road off on the left. Eventually I got the map out to find we had gone far further than we should on the path and overshot the turning completely, so we backtracked to the place we should have left the path and the Old Corry Road was right there, complete with a signpost.

The road follows a gentle valley, with a few scattered houses and many sheep. The hum of the electricity substation soon died away to be replaced by the persistent call of a cuckoo and bursts of strimming from one of the gardens.
We had set off at 9.55 and didn’t reach the beginning of the walk proper until 11.20, which is not a great start, but it was a fine day with plenty of daylight left. We started walking at the end of the road and found a fairly visible path across the heather and most of the way up the shoulder of the mountain to the dark crag that juts out on the right. Broadford had shrunk to a Lego village but we could still hear the cuckoo and Joe Strimmer.

It was steep and hard work getting this far, but once past that crag we were in boulder country. The boulders vary in size from basketball to chest-of-drawers; it’s not always easy to know which ones will bear your weight without rolling, and it is steep. This section felt like doing knee-to-elbow planks for half an hour, or more. I lost track of time. I realised it was still a long way to the top. I thought about abandoning the horseshoe and just coming down again when we got to the top of this first peak. Then I looked down and actually felt dizzy, and reconsidered whether I wanted to go down this way. It hardly seemed like a better option. Simon did some grade-A cajoling to keep me moving forward and upward at this point.

After a while there started to be more grass between the boulders and progress was a bit easier. Simon reached the top before me and laughed aloud when he got there. I assumed it was a rueful laugh, that it was a false peak and there was more hill to come – but as I hauled myself up beside him I realised it was a laugh of pure delight. Suddenly the Cuillins are there in front of you: the scarred, rounded red hills in the foreground and the black ridge beyond. It’s stunning and immediate. We stood by the huge cairn of the Norwegian princess grinning all over our faces. What a summit!

After lunch, mood much restored, we enjoyed the ridge walk to Beinn Dearg Mhor. It was chilly enough to put on long trousers and jackets. We could walk upright and it wasn’t a knife-edge Grib-Goch-style ridge, we didn’t have to think about every step and the views continued to be amazing. We had the panorama down to Broadford and Scalpay behind us, the Cuillins in the distance, and below to our right, the marble quarry at Torrin and Loch Slapin, its islands slightly hazy. The far end of the ridge was steep but we clambered down to the left before the ascent to the peak. Rum and Eigg were now clearly visible.

The summit of Beinn Dearg Mhor is not as high as Beinn ni Caillich but is still satisfying. The descent is via a sizeable scree slope. It was my first experience of this and I found the shifting ground disconcerting. By that I mean scary. Simon was faring better (maybe because he can ski?) He was bending his knees and moving with the gravel at a fair pace. I tried to copy – and it was better, because it was not so far to fall – but I ended up doing a lot of tobogganing on my backside. It was inelegant but fun. We eventually reached the bottom in one piece but my faithful Ron Hill tracksters were shredded.

The ascent to Beinn Dearg Beag was a walk in the park after that, and enhanced by a prolonged view of a golden eagle riding the thermals at the edge of the corrie. We watched it for several minutes – I confess I hogged the binoculars - and marvelled at the huge wingspan, the power and grace of the bird. It slipped over the ridge and, sadly, did not reappear. It was also on this section that we spotted the only other people we saw on the hills all day – two small silhouettes on Beann ni Caillich.

The descent was fairly straightforward, with a path for a fair amount of the way. We plodded through undulating, pathless heather at the end, which is always tiresome on weary legs. The cuckoo was still calling in the evening sun as we returned to the valley, and rabbits bounced along the edges of the road. We reached the Sia café hungry, thirsty and very happy, ordering two drinks each immediately and large pizzas. The restaurant was full, so we sat outside with Beann ni Caillich rising behind us and, slightly unbelievably, a lone piper started to play somewhere. It was definitely not a recording since there were a couple of mistakes. A perfect end to a perfect day. 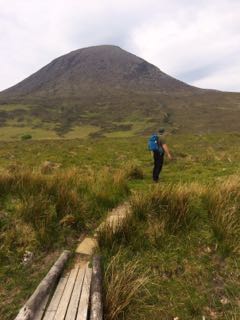