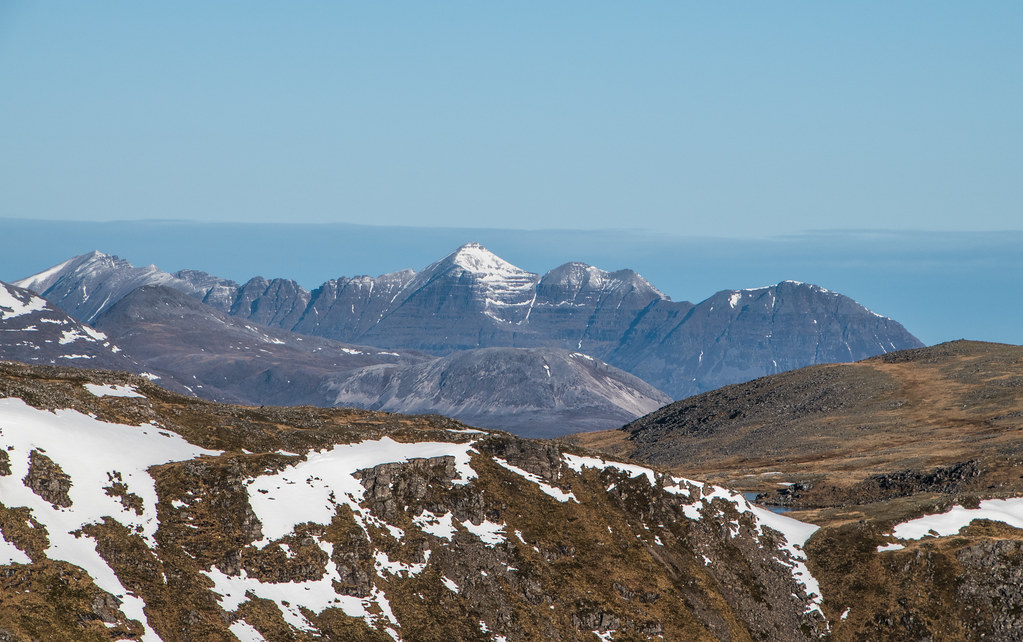 These two Munros may not be the most famous or spectacular in the Torridon area, but with the weather and visibility we had, the views we were treated to from the summits must be very hard to beat. Not sure I appreciated it at the time, but when I was sorting through these photos a couple of months after our walk on the 31st March 2019, retrospectively it must be one of the better outings in the hills for me so far, then again I think I say that with every WalkReport…

Andrew and I set off from Aberdeen on the Saturday afternoon with the plan to camp in the Achnashellach Forest car park. We arrived just after dark and managed to find some spots in the trees just next to the car park – Andrew had his tent and I went for the bivvi bag. With the clocks changing we were up crazy early, circa 05:30 if I remember right (so really 04:30).

There was a good bit of frost on the ground, but I had a great sleep in the bivvi, proving as long as I get in dry (not sweaty) it really does hold the heat well. I was worried prior to going to bed that it could be a horrible night and was slightly jealous of Andrew’s tent situation.

The walk into the hills was long, bitterly cold and in the dark the views were limited to the distance of the headtorch. It felt like a steep start to the day until we hit the 298m mark and then began a slow and steady descent down towards the first water crossing of the day.

We arrived at the Allt a’ Chonais and there was a (very) well-used wire bridge, which I hadn’t anticipated. Andrew went first and make it look easy.

At least it wouldn’t be far to fall… 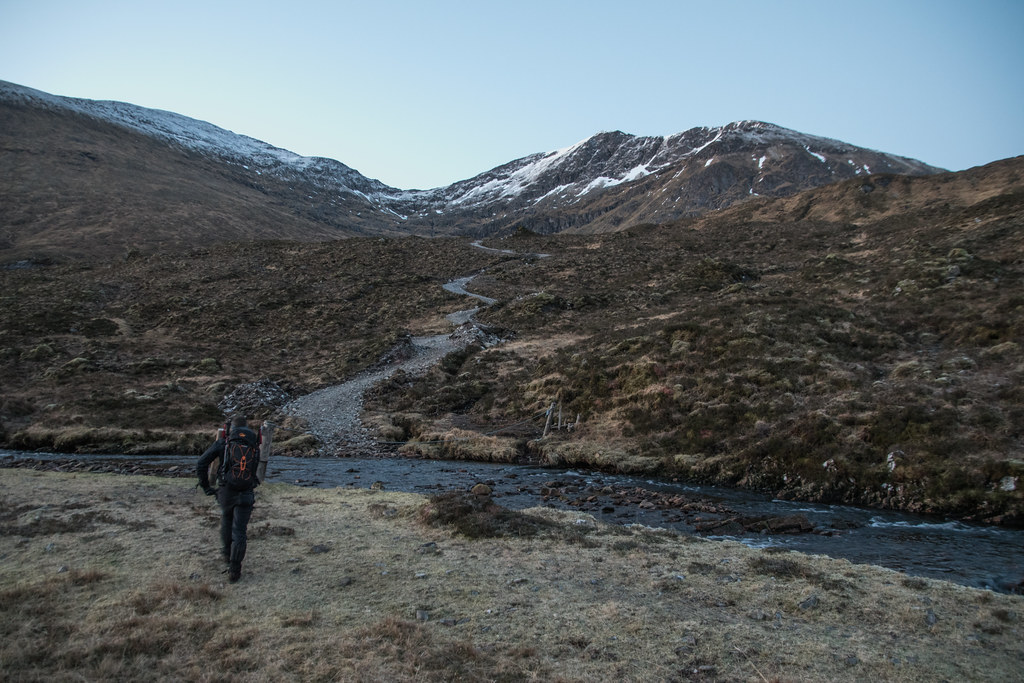 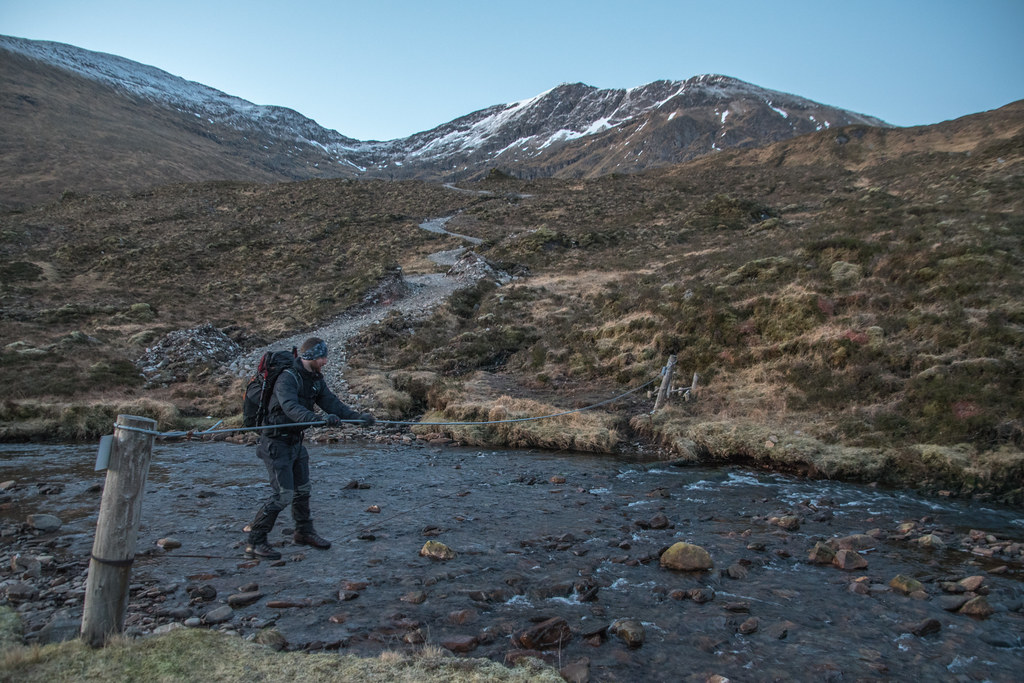 Heading towards Bealach Bhearnais was on a good path with a steady incline and was great to again be gaining some height and more importantly some heat – it was still very, very cold, but it looked like a good day would be just around the corner. 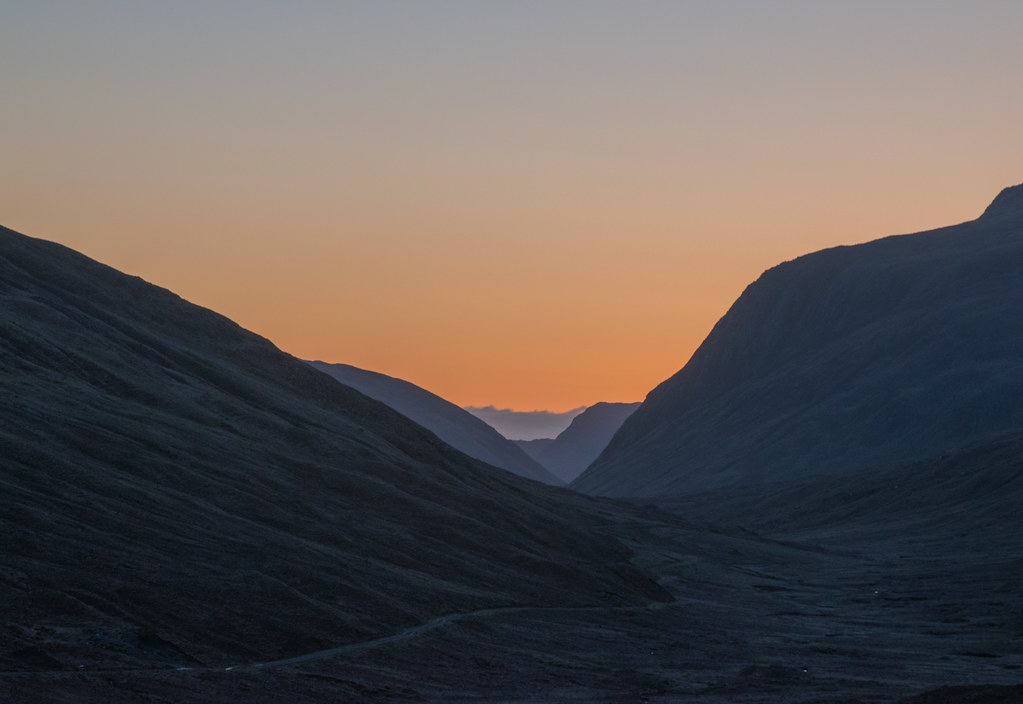 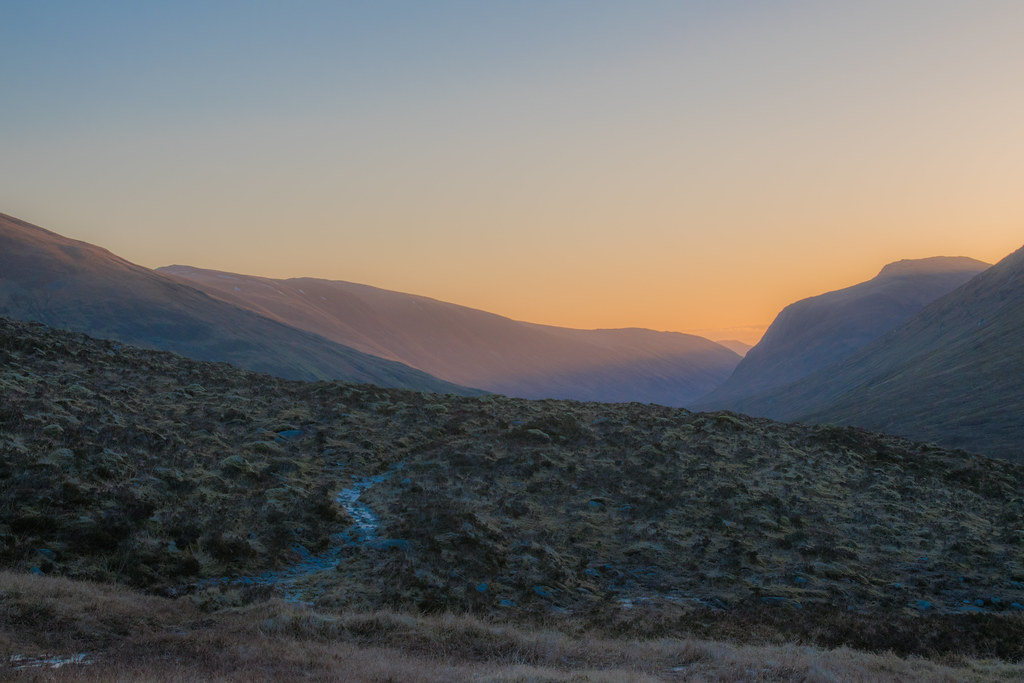 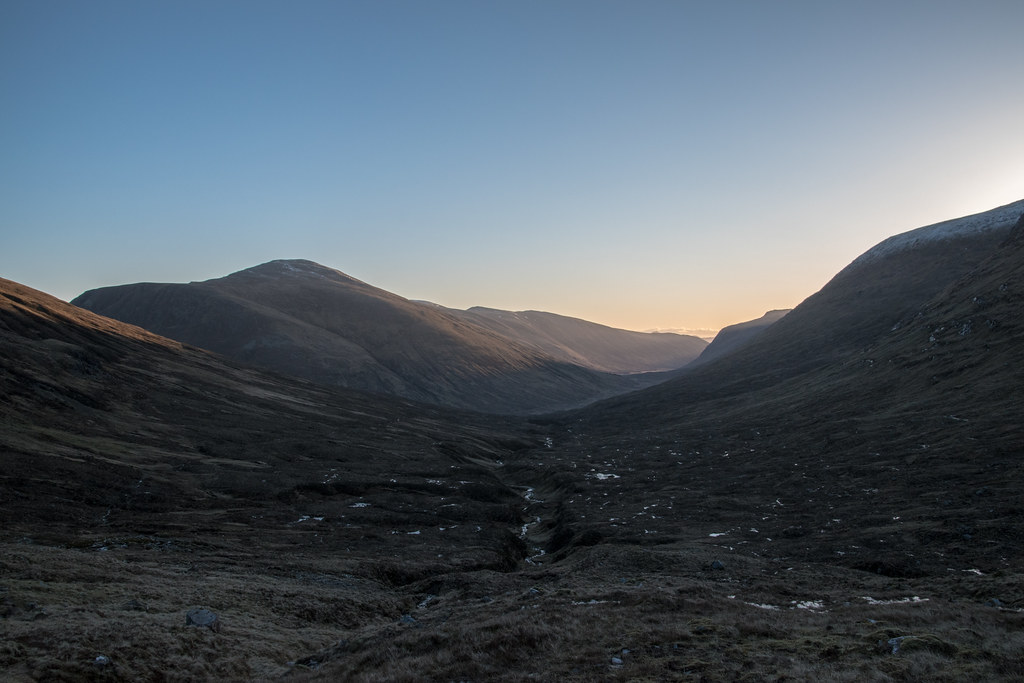 We got to the bealach at 596m and contemplated heading towards to summit of Beinn Tharsuinn, but after climbing about 100m we decided to abort this plan and stick to the main route. 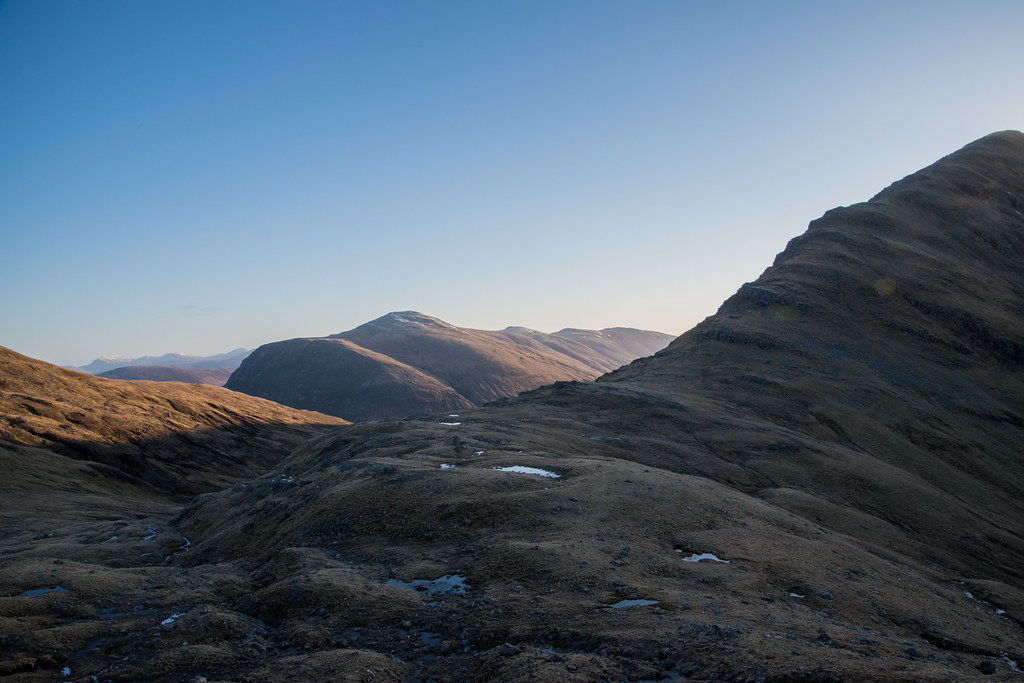 Heading up the shoulder of Sgurr Choinnich, the views Northwest towards Laithach and Beinn Eighe are simply breath taking – majorly grateful it wasn’t hazy! 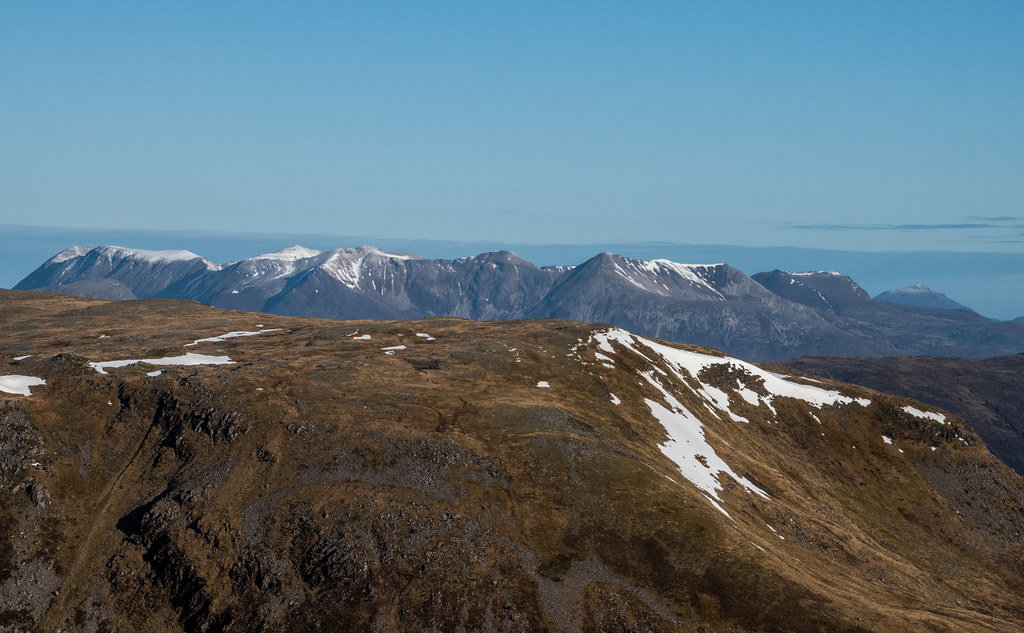 Nearing the top in the early morning sun 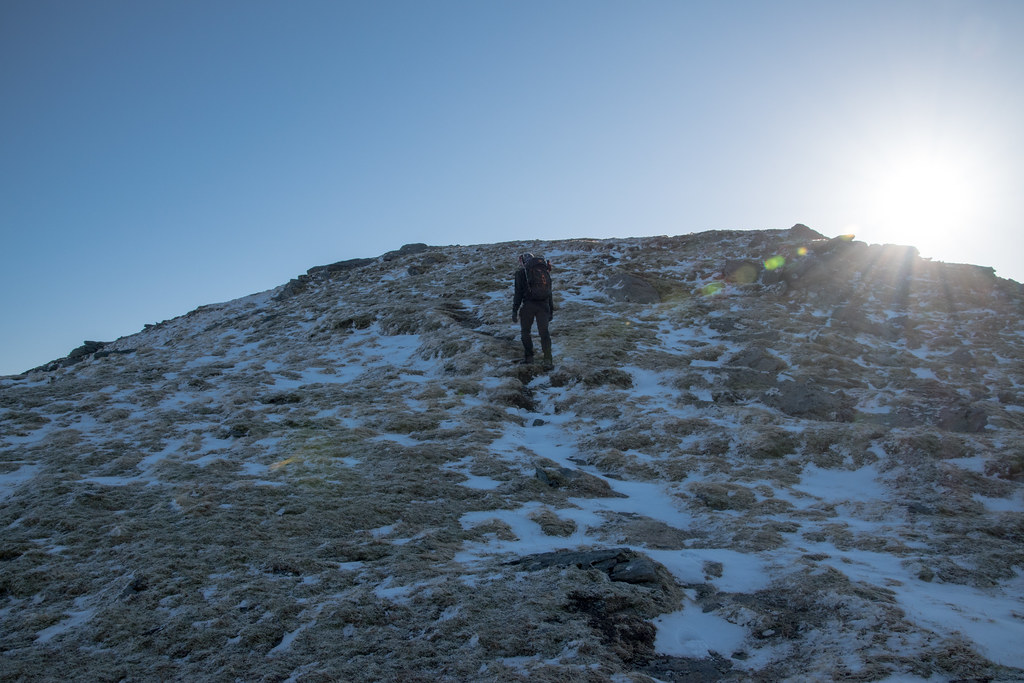 My original plan of action for this outing was to get to the first summit for sunrise, but with the clocks changing and the long walk in I had definitely bitten off more than we could chew. We had acknowledged we were never going to be there in time pretty early on in the day so had been taking it slow and steady rather than bursting a gut to try. 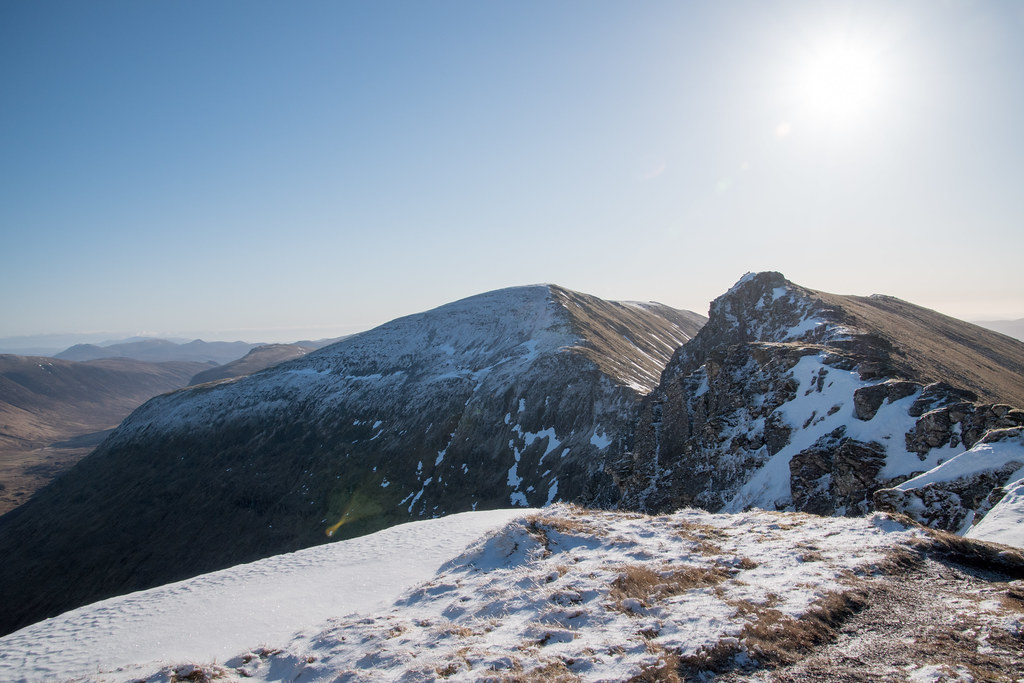 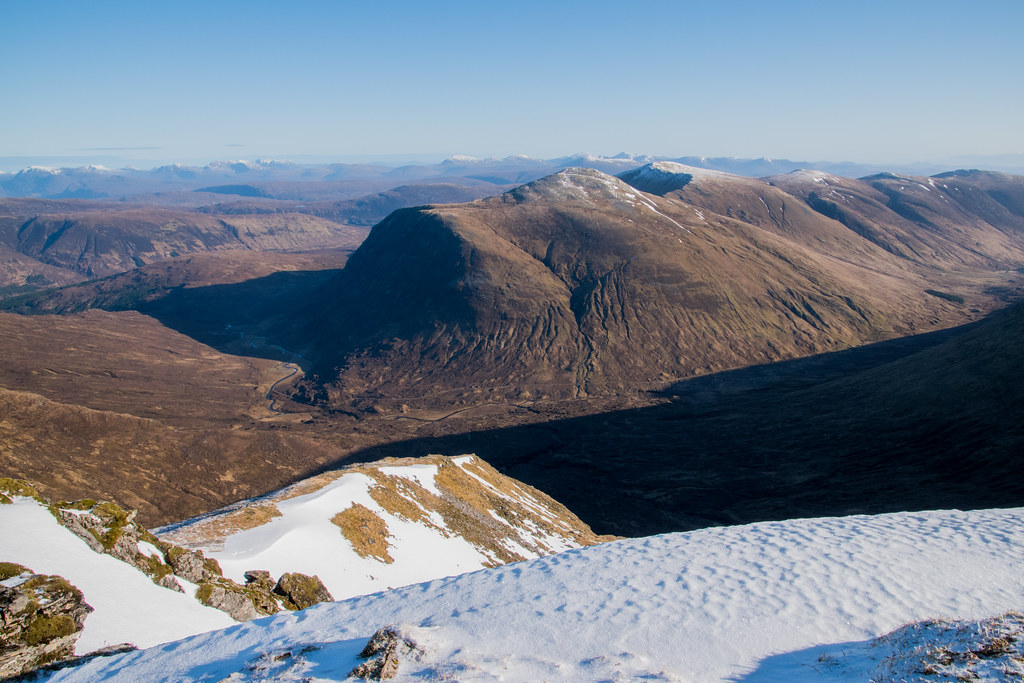 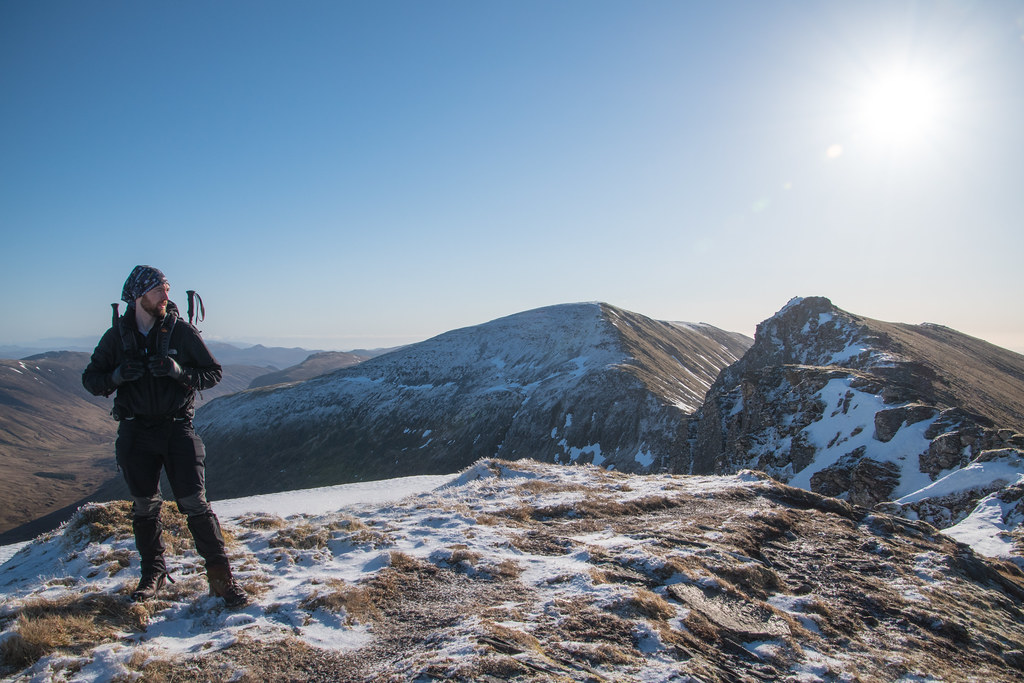 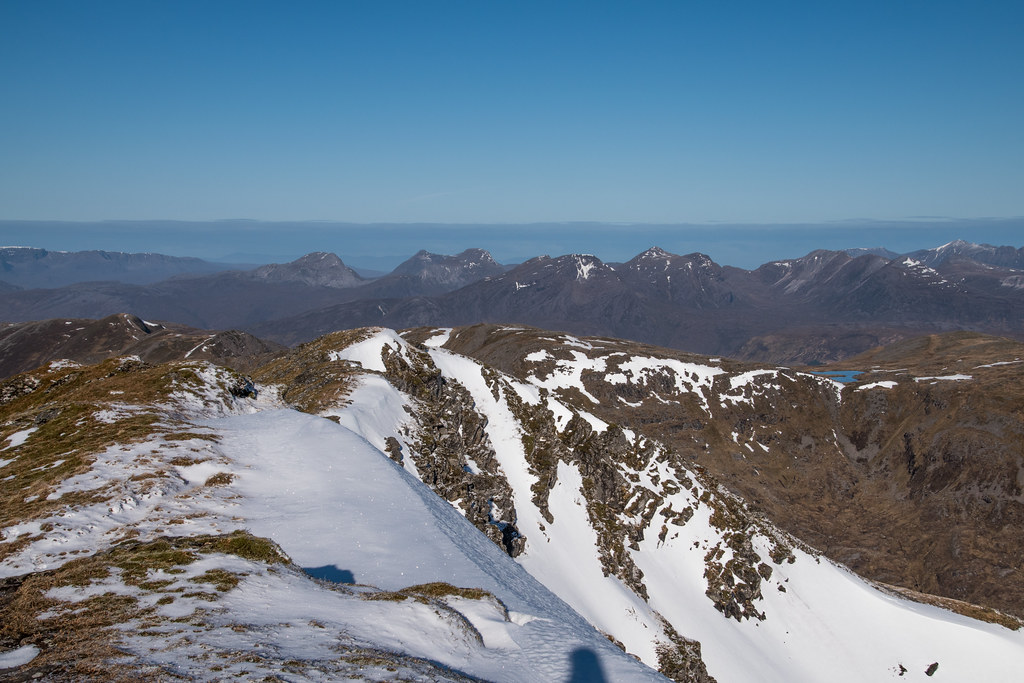 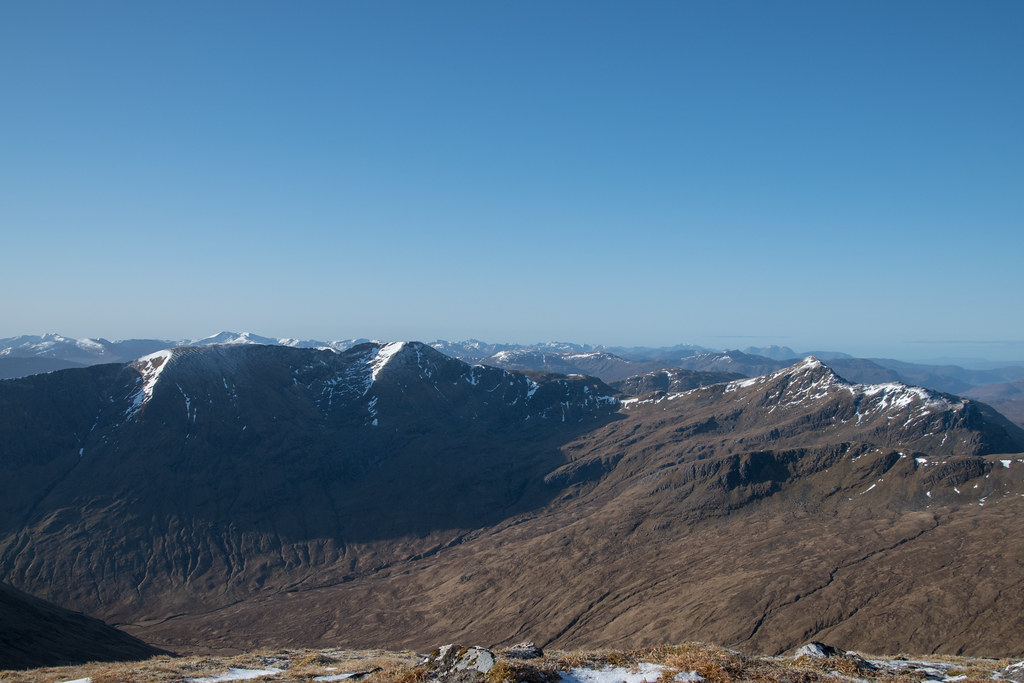 It was indeed shaping up to be a lovely morning, thankfully with every passing minute of the sunrising it was getting warmer and warmer. If I remember correctly there was hardly any wind, so we stopped on the summit of Sgurr Choinnich, with not a soul in sight and enjoyed breakfast.

Loch Monar was as still as glass and all the bog puddles and interlinking streams leading down towards the loch were sparkling very brightly, enough to wish I had taking some sun glasses.

I remember on our descent down to the bealach discussing about how nice, yet equally ugly the Scottish hills can be. In this instance it was depressingly barren, and I can’t help but think some form of trees would work wonders, but then again, my lack of knowledge is why I am no geoscientist. 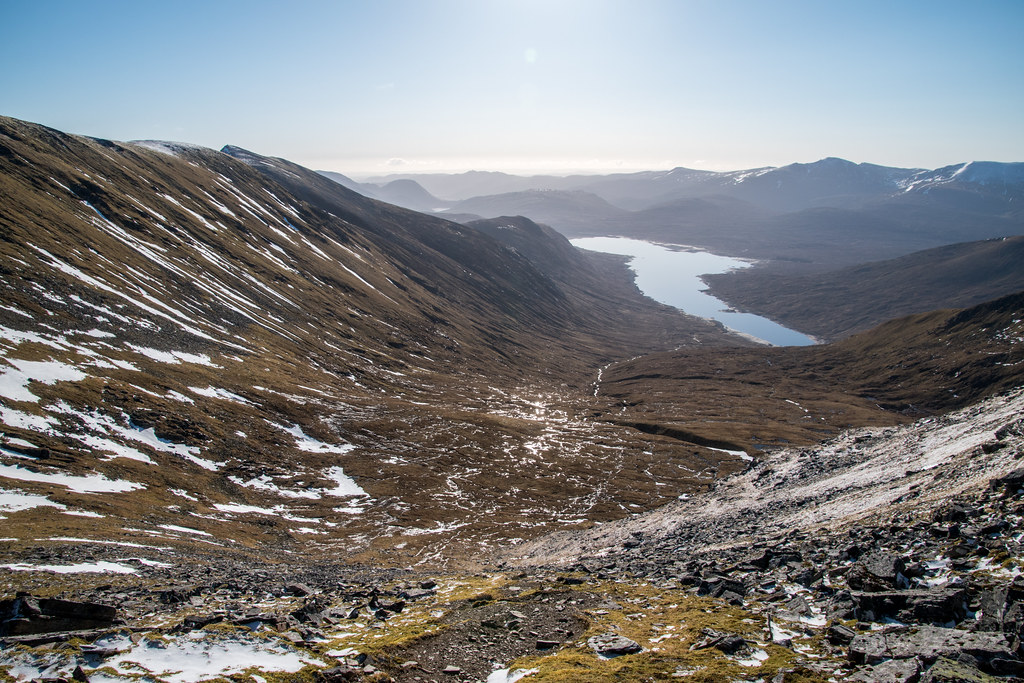 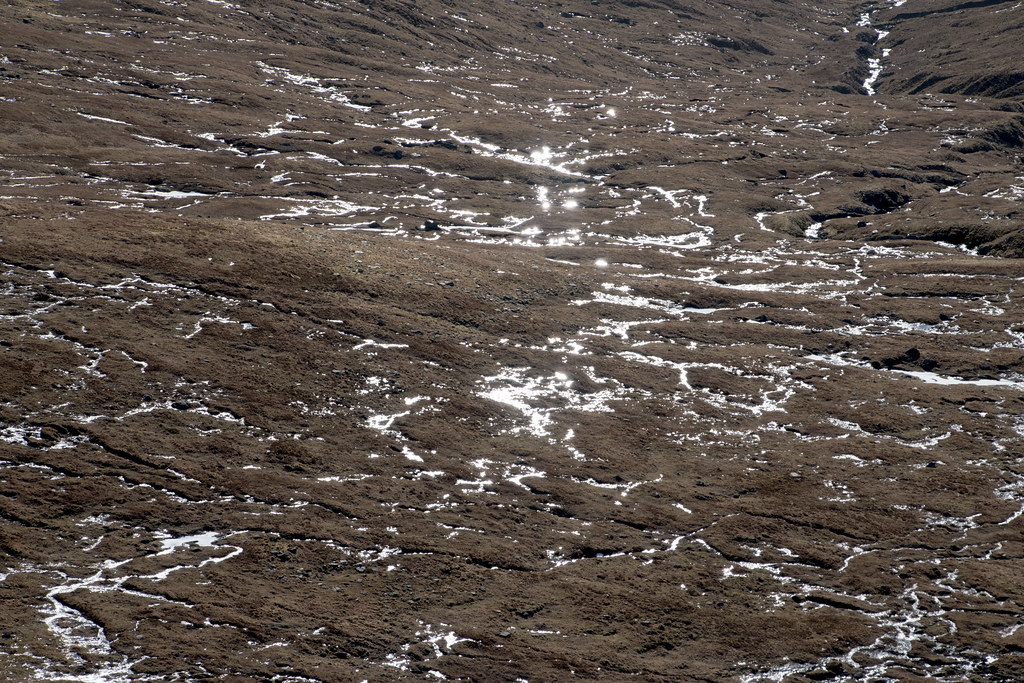 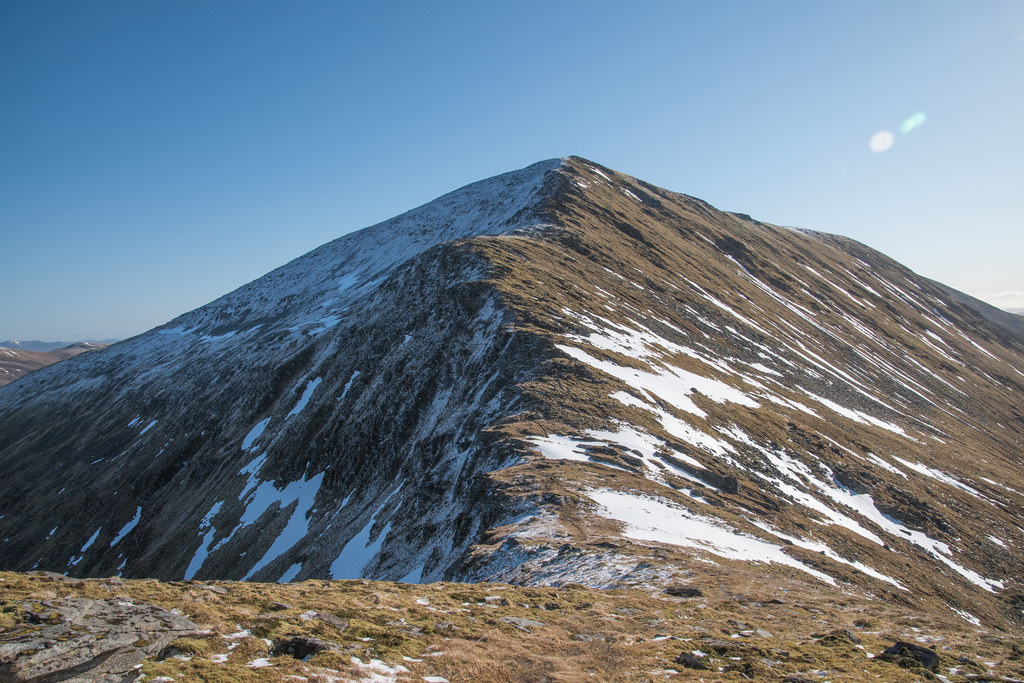 A reminder of winter 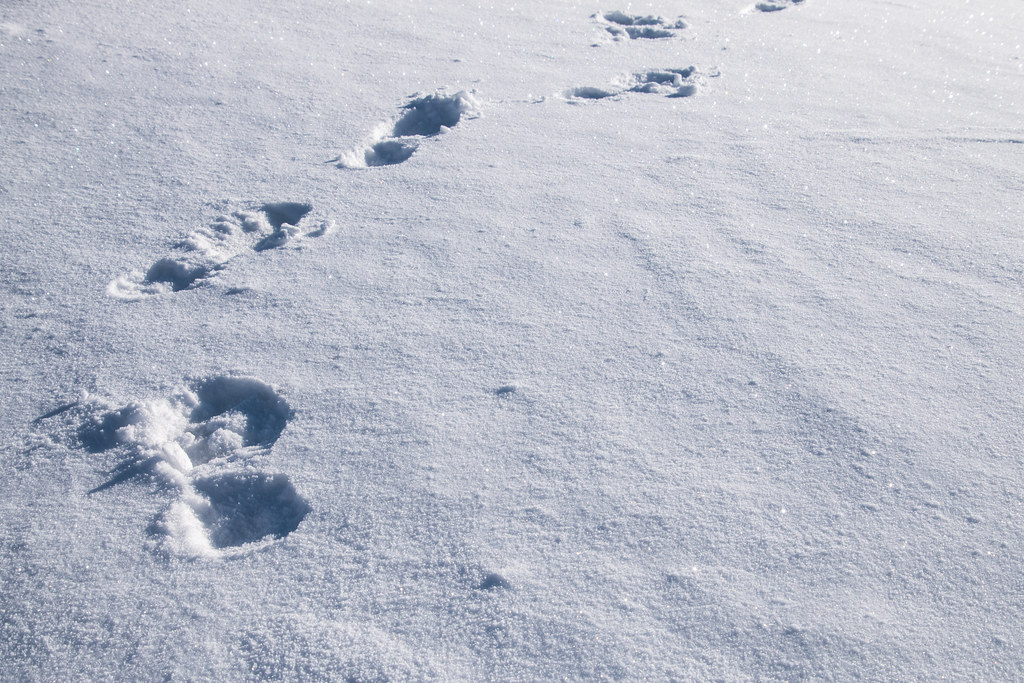 Sgurr a’ Chaorachain was an easy climb from the bealach, but after the early start I was beginning to tire and already thinking about the long drive back to Aberdeen and the Monday morning that awaited.

Looking back to the first Munro of the two 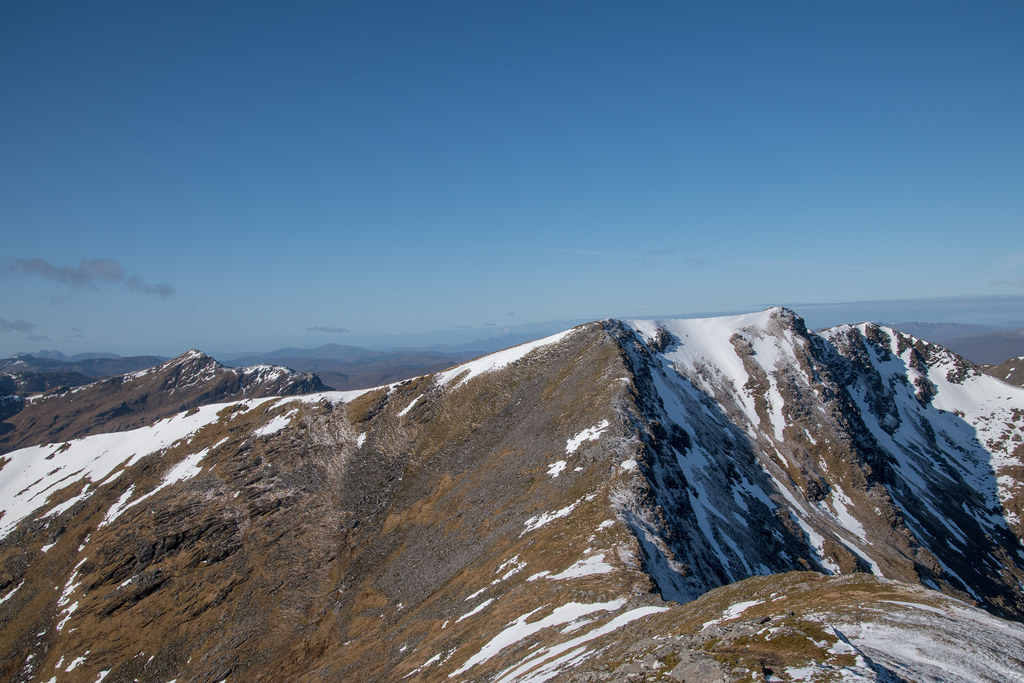 Summit views from Sgurr a’ Chaorachain 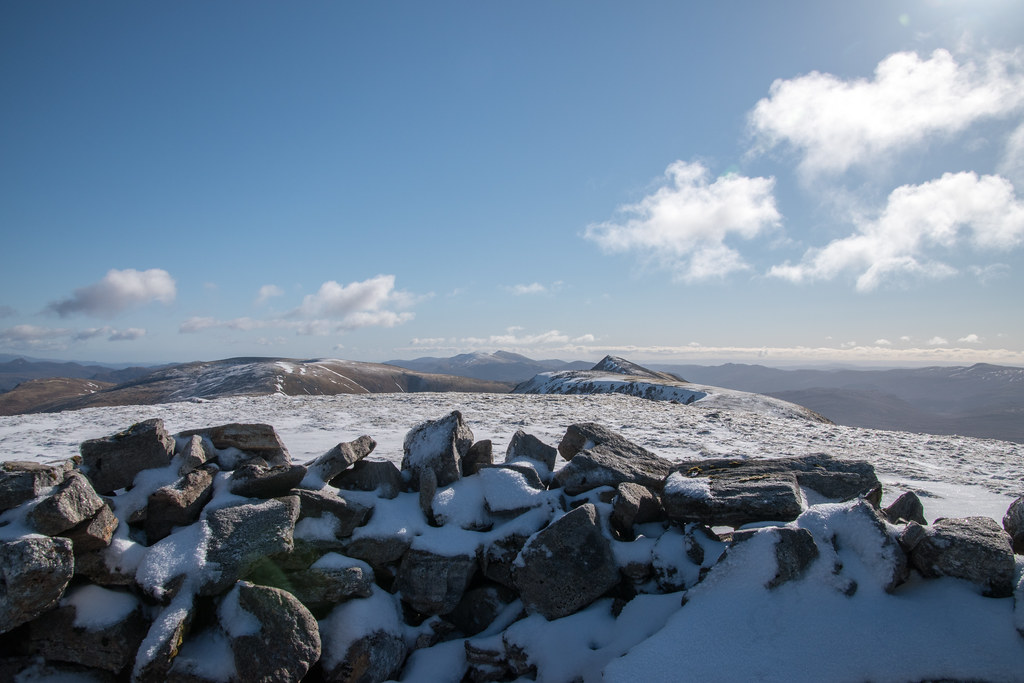 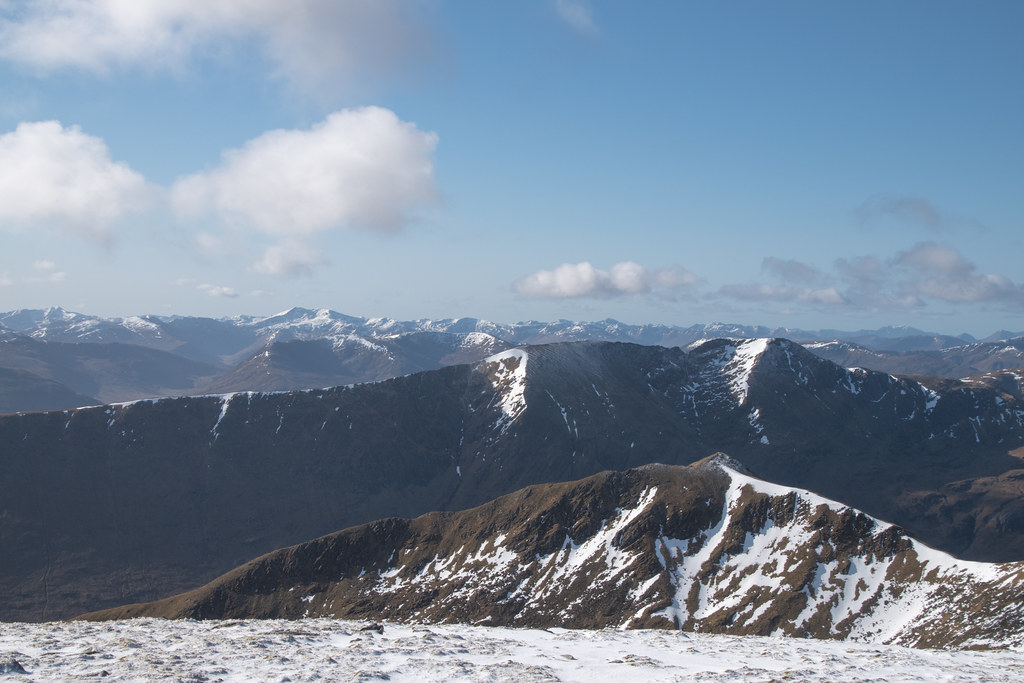 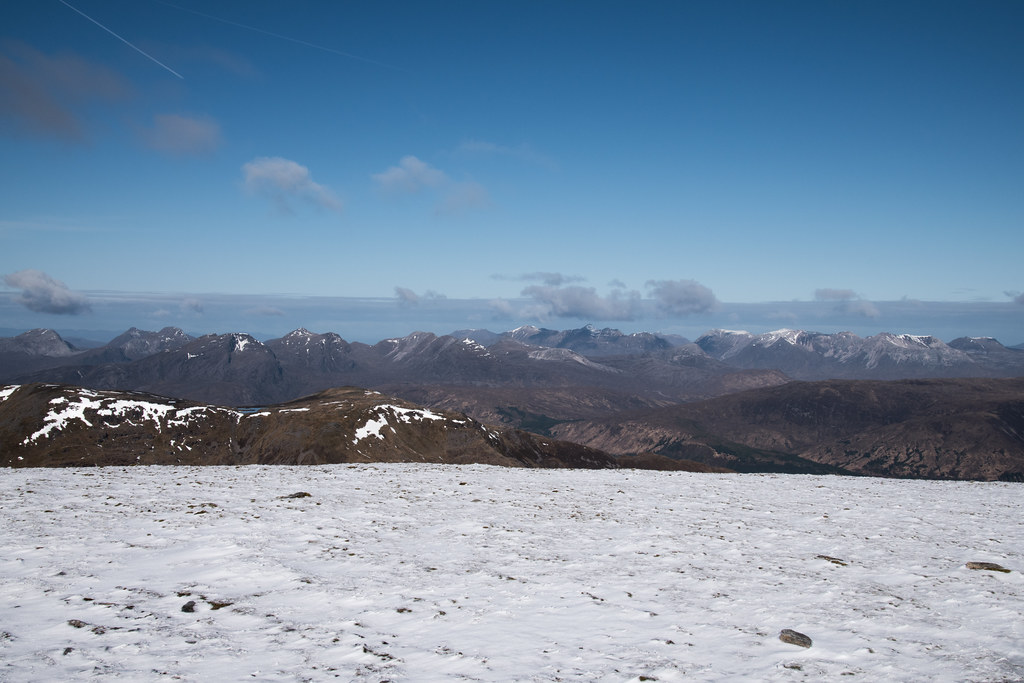 Heading down was steep and with the wet spongy ground it was mentally challenging. Any time you even slightly lowered your concentration you were only seconds away from decking it.

The only saving grace from the annoyingly steep and slippy downhill section was the views towards the north side of Sgurr Choinnich, which were immense. 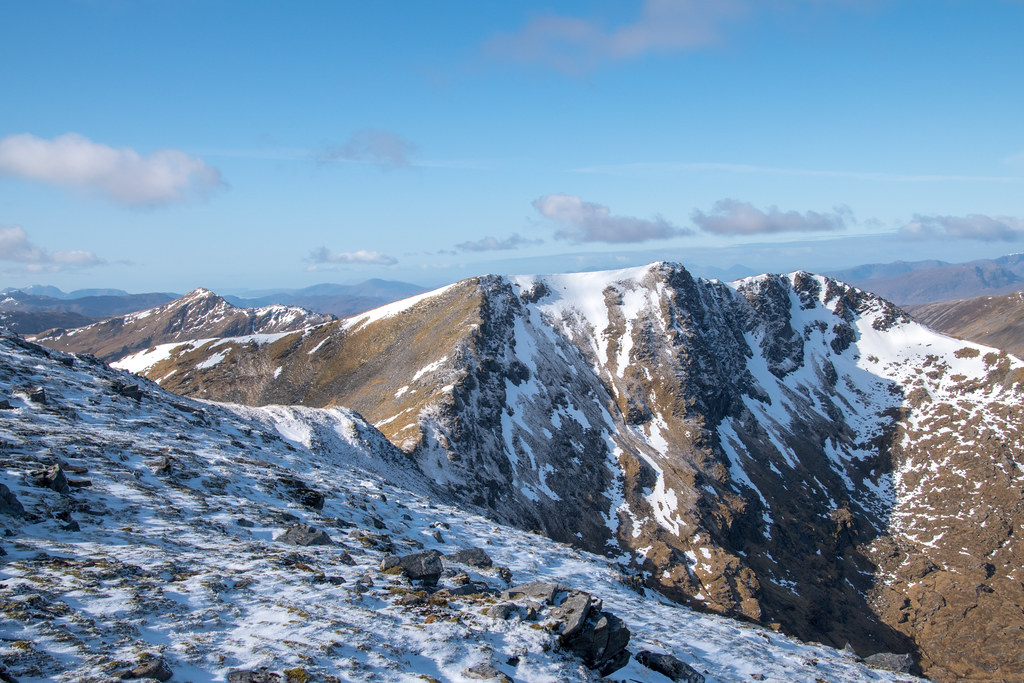 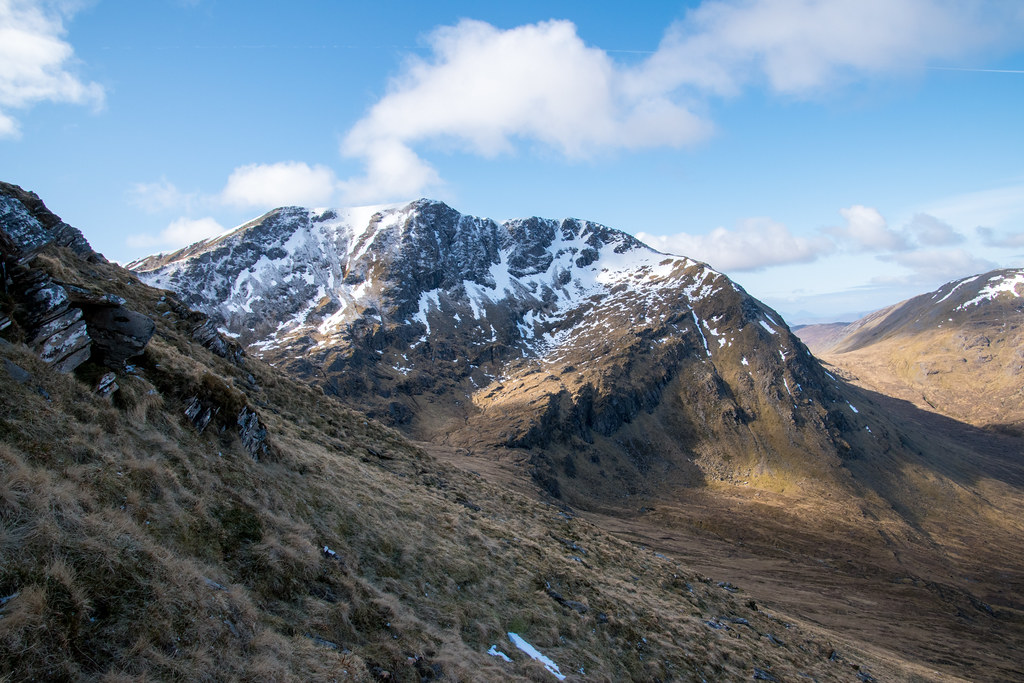 We didn’t follow the exact Walkhighlands suggested route, instead we headed back to intersect the original path from earlier on in the day, just below the waterfalls marked on the map. 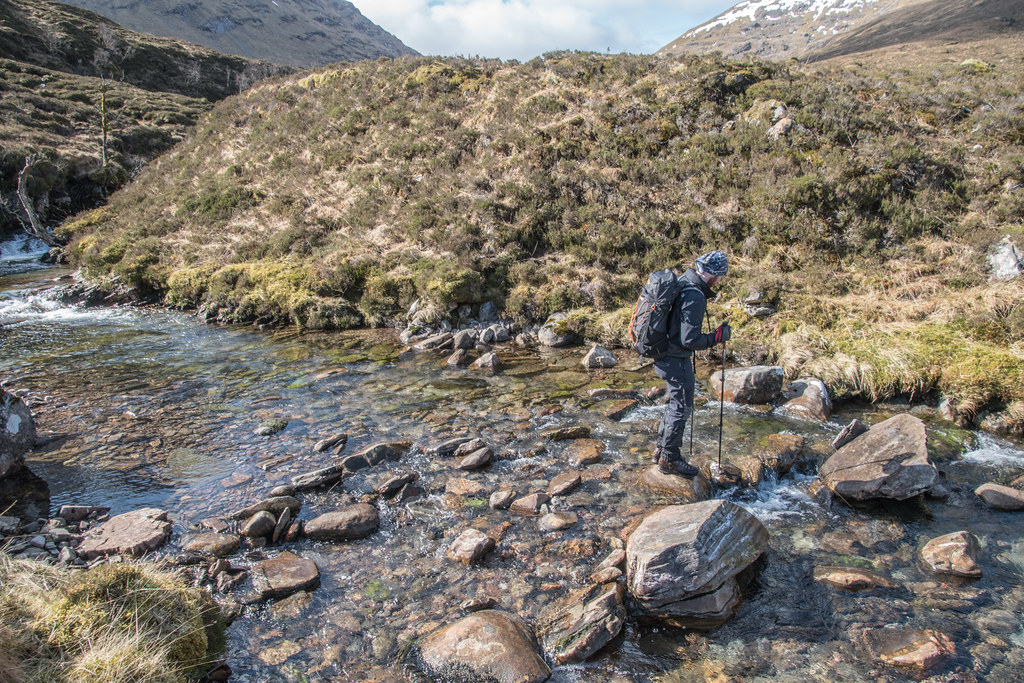 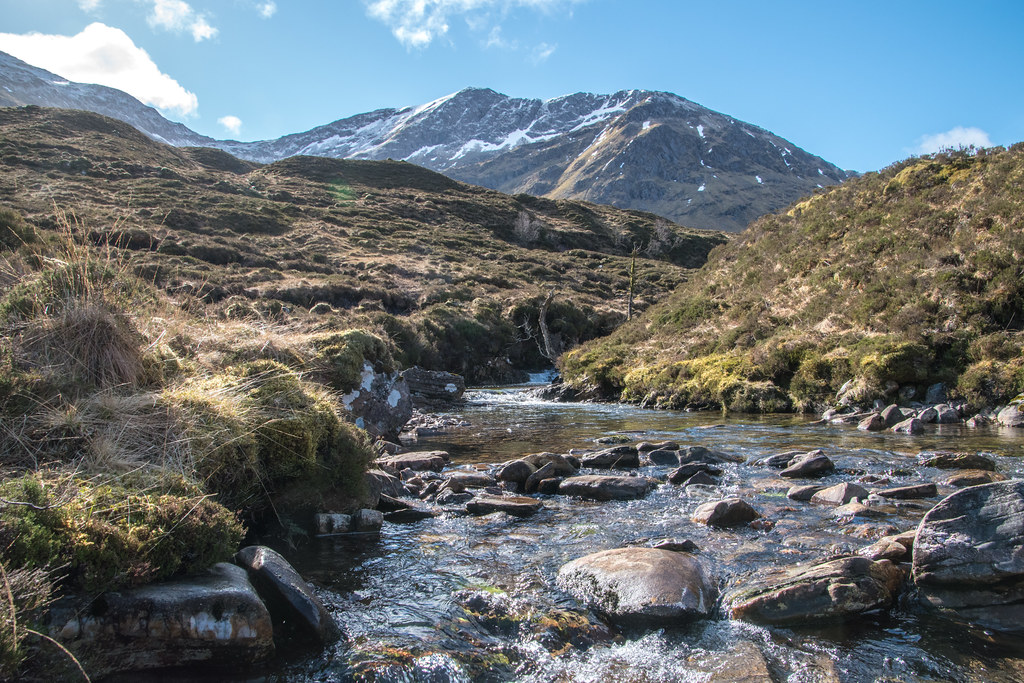 By the time we reached the wire bridge on the wooden support poles has loosened off in the boggy ground and the limited tension that was in the ropes had disappeared – not sure how often this happens?

Instead of attempting the impossible we just waded through / rock hopped to get across to the landrover track. It certainly would be a difficult task to cross with any more water, and probably impassable in spate.

It was only 12:00 by the time we reached the landrover track, so we had been unintentionally making swift progress, but there was still the long walk back to the car, and the even longer drive back to Aberdeen.

The A890 and A832 are quite beautiful roads to drive on when there is no traffic, and on this day, the 31st March 2019, we experienced one of those very rare days – any cars we did meet were already going at a suitable speed, or so slow overtaking was no issue.

Obviously once we got to Inverness, we had to endure the A96 which must be one of the most unfit for purpose roads in Scotland.

All in all a great outing. Maybe I wouldn’t do the exact same route ever again, but most definitely an area I will be back to for a longer multi-day adventure – the remoteness is spectacular.

ooh that was just gorgeous!