Our aim this summer was to introduce our children to the experience of wild camping. At 3 and 6 years old we were keen to find a route that was adventurous but wouldn't put them off camping again! After careful consideration we planned a 3 day adventure in the Cairngorms, particularly Glen Feshie from Auchlean. With several wild stream crossings, a straight forward track and the most well equipped and friendly bothy you could find, the adventure was a roaring success! In addition, on the second day I managed to bag a sneaky munro (Mullach Clach a'Bhlair).

Hopefully this report & video may be helpful for other young adventurers

Day 1
We started our adventure at Auclean Carpark (NN 85084 98466) heading for the well known bothy at Ruigh Aiteachain (NN 84725 92790). Rachel and I (Mum and Dad) carried enough equipment for 2 nights of camping in a 40 litre bag each. The children each had a small rucksack with their toothbrushes, a token toy and my sleeping bag system (Down quilt and OMM quarter bag). Frustratingly, most children sleeping bags seem made for car camping and so the bulky bags were carried by the adults. If anybody can recommend decent lightweight camping gear for children please let me know!

Todays walk was 6km along a gentle track. It was just the right distance for Ethan and Isla to have found it a challenge but was still fun. The monotony of the track is broken up by the great views down the Glen and several exciting stream crossings. We wished we had bought a pair of lightweight sandals for the crossings and were thankful we had sticks.

We arrived at the bothy after about 2 and a half hours which was quite a sight for sore eyes. After looking around the bothy and chatting to the lovely people who were staying there we decided to camp so that we didn't bother those trying to get a good night's rest in the bothy.

Day 2
After a great sleep we woke up to the sky looking quite gloomy outside the tent. After closer inspection we realised it was a cloud of midges waiting to give us a great scottish good morning. We discovered that the mad midge dash out the tent is not as effective with four, and was suitably swarmed by the little blighters. Thankfully the bothy was only a stone's throw away and it afforded protection whilst we woke up with some porridge and a brew. I really cannot understate the facilities of the bothy, it is well maintained, has two long drop toilets (which are bucket flushed into a septic tank), an ingenious fresh water collection point and if you are lucky enough to be there with Lindsey, who looks after the bothy, there is fresh bread, marshmallows, boiled water and a bbq. If you are thinking of giving bothying a go, then this is a great place to start!

As the children explored around the bothy I went for a cheeky run up Mullach Clach a'Bhlair. Although a munro the mountain isn't the most exciting.

A well maintained track climbs up to the the plateau following the ridge of Meall nan Sleac. I am sure the views are spectacular but sadly the visibility wasn't great this day. I enjoyed fleeting glimpses of Core Garbhlach which I am sure would look impressive on a clear day. I reached the loosely cairned summit after a brisk walk and was looking forward to returning via a more interesting and pathless way across Drium nam Bo. I broke out of the clouds after dropping down a couple hundred metres and enjoyed the views opening up in front of me. Following the ridge line I dropped quickly to the beautiful Lochan Nam Bo, which incidentally would make a great wild camping spot. Up until this point the ground was very simple, I reached a distinctive cairned tower on Creag na Gaibhre and then headed west straight down off its slope planning to pick up a path indicated on the map. Unfortunately, with several sheep tracks I struggled to identify the zig zag path and ended up bush wracking through heather. The going was very tough and soul destroying as I was hoping to get back within 2 hours. Despite several attempts at crossing the path (including double checking my location on GPS) I ended up bush wracking for a good 40 mins or so descending into woodland and following a stream down (very steep at times) to the main track in Glen Feshie. I never did get to see the path as identified on the OS maps. The Harveys map indicates the path is broken up and so perhaps it was overgrown. I didn't take the time to explore it from the bottom as I was looking forward to a quick bath in the river to cool down. Does anybody recall descending via the path recently?

Although Mullach Clach a'Bhlair isn't the most exciting mountains it is an enjoyable quick loop which fits in well with a visit to the bothy.

After freshening up we packed our gear and set out back towards the car, planning to camp a couple of km's from the end. We are really glad we planned to do this as the children were clearly tired and walking the full 6km back to the car would not have been enjoyable. Indeed, not long after walking I had our youngest, Isla, on my shoulders and she promptly fell asleep. Thankfully, after her power nap she woke up to enjoy the last km to our next camping spot beside the bridge over River Feshie. This spot is clearly enjoyed by other campers as the ground is flat'ish, the water is easily accessible, it is quite open -which invites a midge preventing breeze - and it is even accessible by car (but not recommended).

Day 3
After a lumpy nights sleep we woke up to finish the day in high spirits, relatively midge free and with great weather. The last couple of kilometres were straight forward and we returned to the car feeling like champions.

The children absolutely loved their adventure and thankfully would like to go again. Hopefully, this report might inspire, or give ideas to, other family adventures

A few photos, although the video gives a good impression. All routes lead down the glen 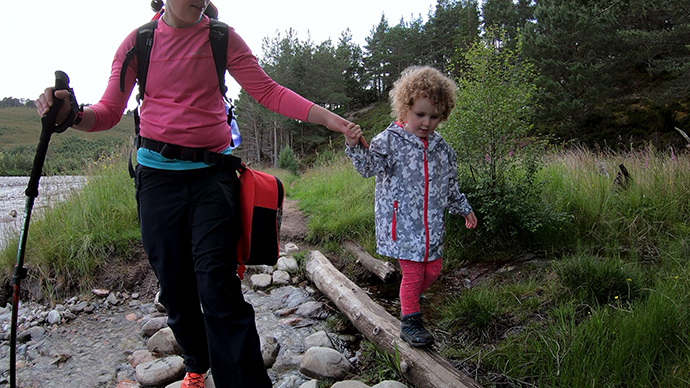 Stream crossing for little ones 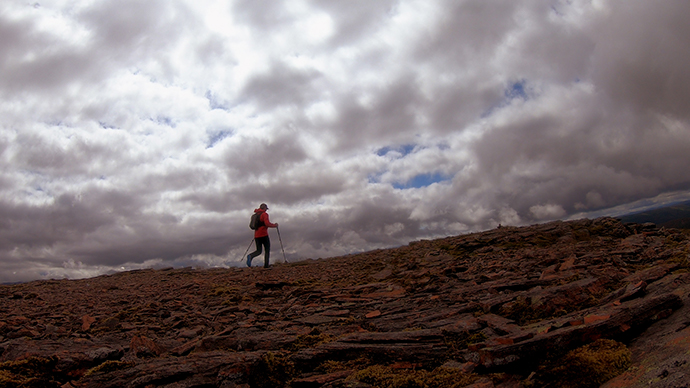 Looking across to our camping spot Glen Feshie is a fine place for walking. When I went to Mullach around a year ago via Coire Garbhlach to Mullach I descended to the Bothy area via the old path down to the area of the bothy. Thirty years ago the path was perfectly navigable to the bothy area but since then through lack of walkers use the fine old stalkers path has become overgrown with mainly heather and this despite the inclusion of this descent path on the circular route for Mullach. All in vain when the 'bagging folks' use the land rover track almost to the summit and then, it appears, usually descend by the same route to rush on to the next hill to bag.

A year ago I found the path difficult to find in the lower parts after descending from the fine old rock and turf wee bridge across the Allt coire nam Bo stream but by just trying the 'hang into the contour' the path reappears when close to the right angled turn in the path down to RA. see on here... Into Coire Garbhlach then out onto Mullach..

Thanks very much, I am glad I wasn't going completely crazy. We plan to revisit as a gauge of how the kids are progressing, when we do I will scout out the stalkers path. Other than the bushwhacking the circular route is much more enjoyable

Thanks again for your reply.