Very unusually, I had managed to have two free weekend days back to back, and although there were a hundred other things I should have been doing, I was determined to have a proper break and use them both for the hills.

After a late return home on Satursay night I wanted something a bit more relaxed, and so I was tempted by the summer Edinburgh-Fort William bus, which would easily give me enough time in Comrie to climb Ben Chonzie alone (I had originally toyed with the idea of a more complicated plan involving Auchnafree Hill, but I can find another way to get there).

The bus seemed to have plenty of time to hang about everywhere - I suppose it's timed for weekday traffic - but it still arrived in Comrie before any of the cafes were open, so I wandered about a bit before finding coffee and cake.

Duly fortified, I started off up the Deil's Cauldron path - the path cuts off the first loop of the road, and is a nice track through the trees. 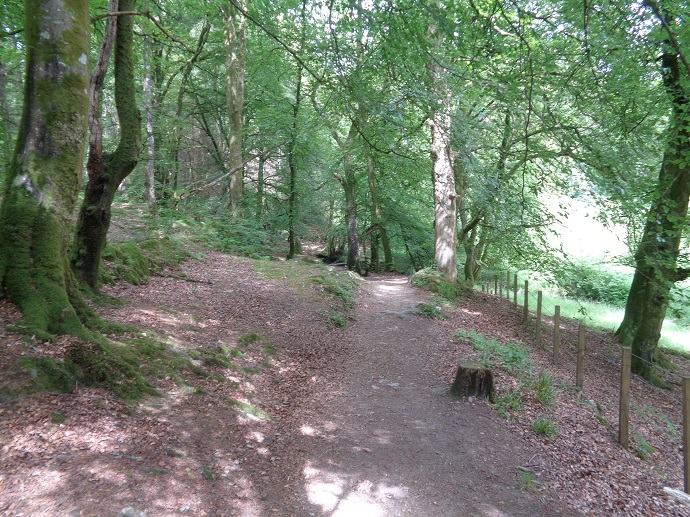 Further on it turns into an impressive array of wooden walkways, winding down to the waterfall viewpoint. 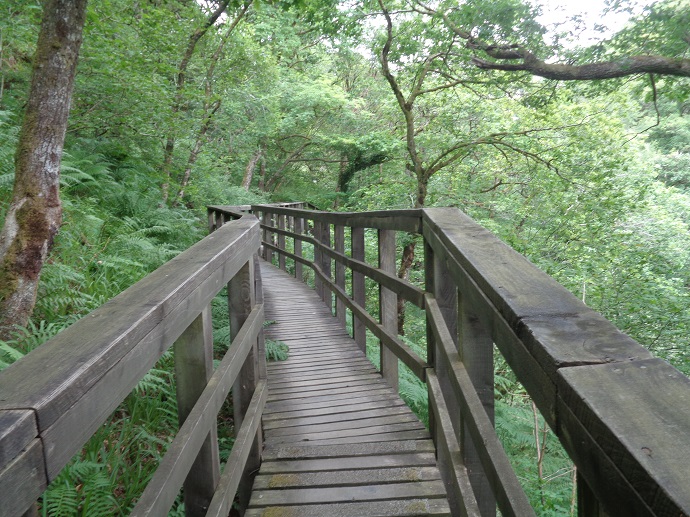 The waterfall is also impressive, but you don't get much of a view of it - it all comes through quite a narrow cleft in the rocks. 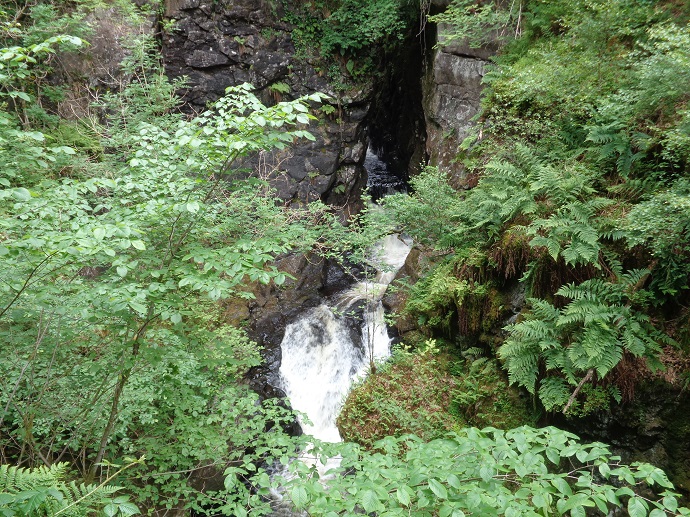 Beyond that steps climb up to the road, and from there it's just a road walk up, with nice little rocky hills on both sides.

There's a small cluster of houses near the head of the glen, where it opens out again - a nice spot. 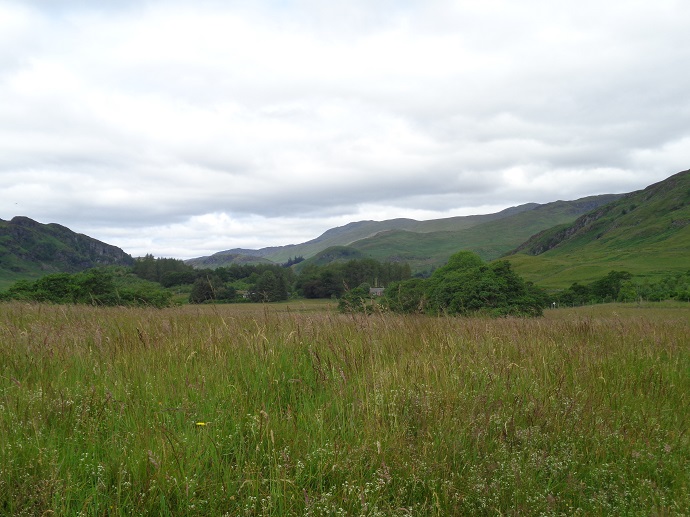 The head of the glen

Eventually I came up to the little car park, where signposts point you to Ardeonaig and Ardtalnaig but not to Ben Chonzie, and where a lot of chickens appeared to be walking around with feathery trousers on. I don't think I've ever seen chickens quite like that before! 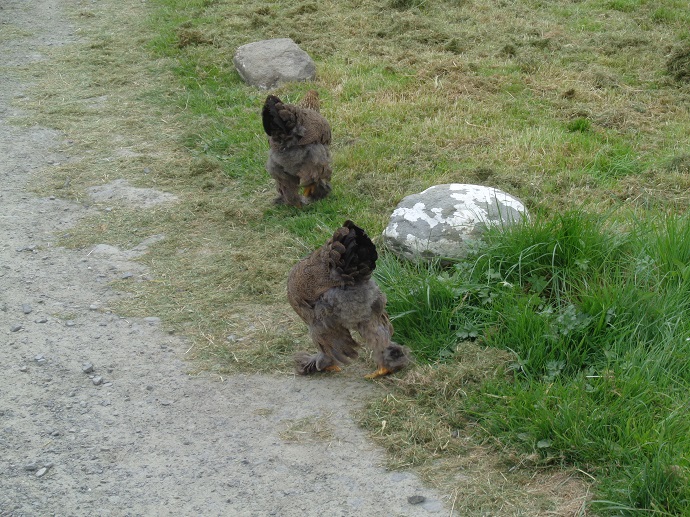 Apart from the road there was really only one way to go, up a track towards two houses, and two men sitting in front of one of the houses pointed out the way to go, dodging round to avoid the gardens, and onto an uphill track. 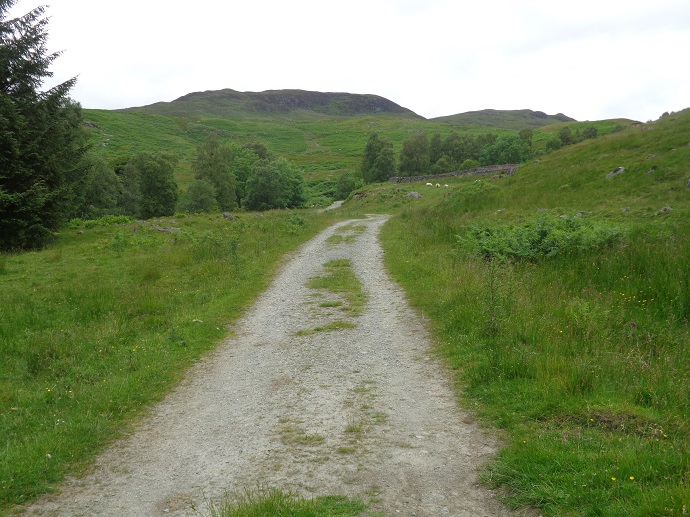 It's still easy walking, solid underfoot and fairly flat at first, and I was pushing on as steadily as I could, in case I slowed down when I got to the real climb - the track keeps climbing without getting particularly steep until it reaches a little dam where it splits, one part keeping to the burn, and the main track crossing to to swing round and head more directly uphill again. 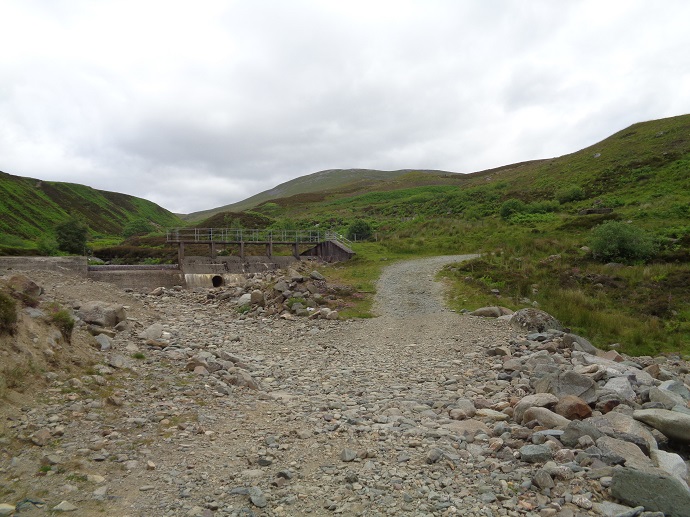 This track soon found its own burn to follow, not nearly as deep a valley as the main part of the Invergeldie burn, but a pretty little hollow beside the path. The steeper upper slopes of the hill were in view up ahead now, and the track went winding up. 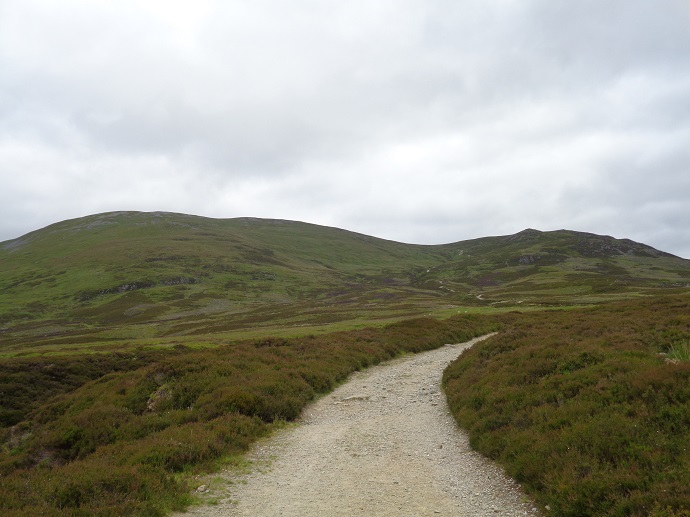 The track winding up

I finally stopped for a rest as the track steepened, sitting down on a rock to eat my lunch, but up to that point I'd been making pretty good time in spite of tired legs. I expected to keep on the track until it faded out, but instead a cairn marked the point where a path cut the corner towards the summit, and I followed it up. 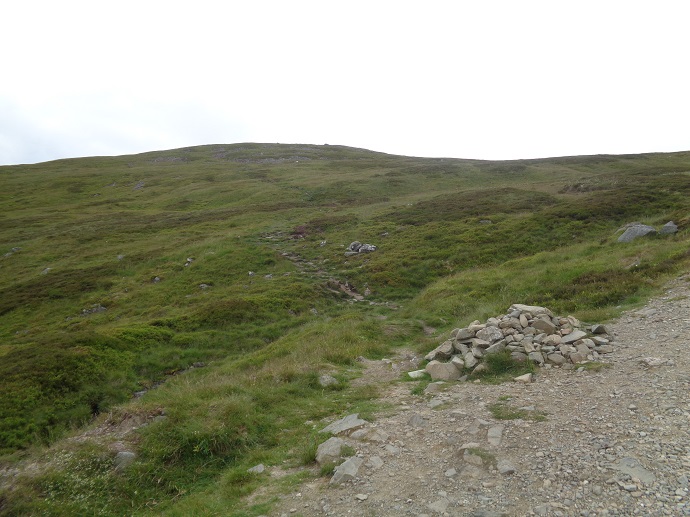 The path was a good bit rougher, a scruffy earth thing which toiled up and came out into a flattish place scattered with occasional cairns and occasional walkers. 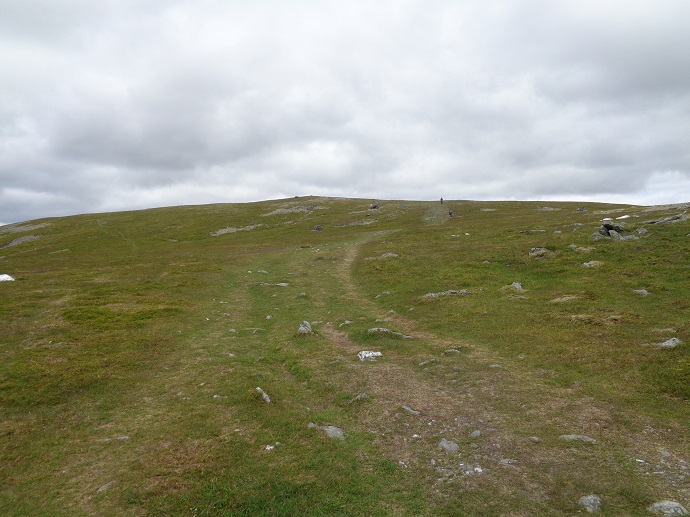 I thought this was the edge of the summit area, but I was doomed to disappointment, as the summit turned out to be off round a corner and what looked like a mile further on - a right angle fenceposts led up to it, but there was another little path cutting the corner. 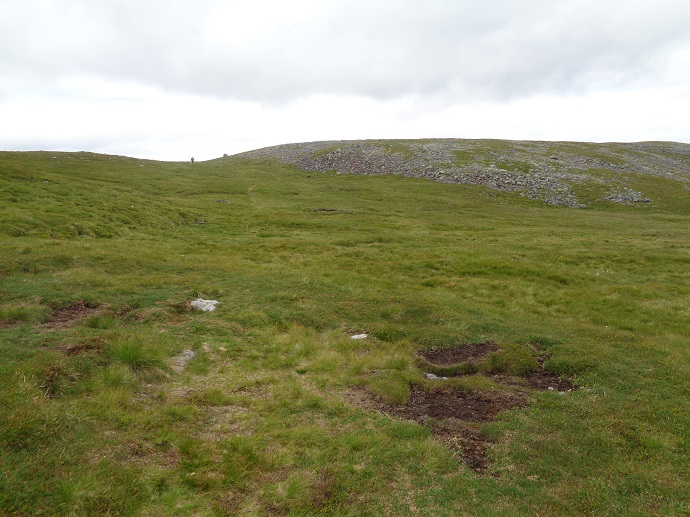 There was still a bit of a climb ahead, up over stony edges onto a flatter place again, but I knew the summit couldn't be far off. There had been a steady trickle of people coming down past me, but now I was alone, and there seemed to be no one behind - I felt as if there must be a ban on reaching the summit after 2:30pm which I didn't know about! 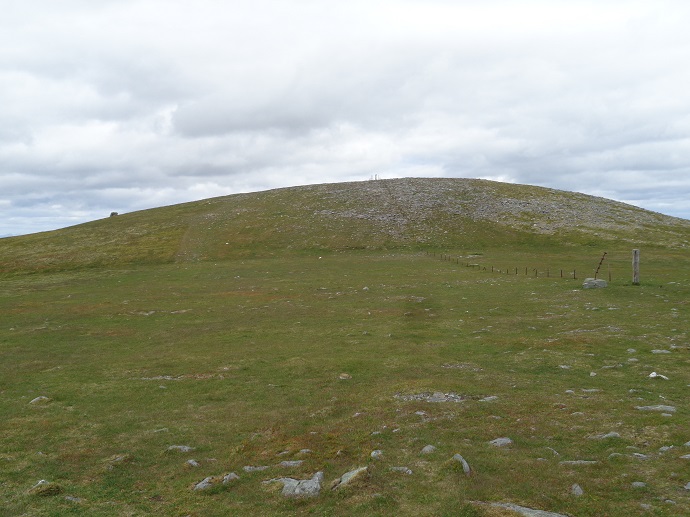 Up to the summit

The summit is a great cairn in the middle of quite a large flat space, and the views are pretty good - this is one of the boundary places, with hills all round half the edges and not round the others (although the Lomond Hills and a hazy Tinto were making valiant efforts). 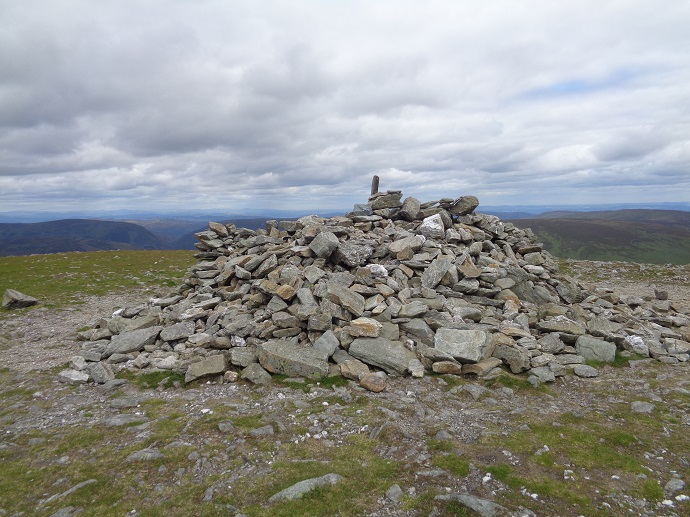 The close at hand view was especially good, over Shee of Ardtalnaig and an invisible Loch Tay to the Lawers range. 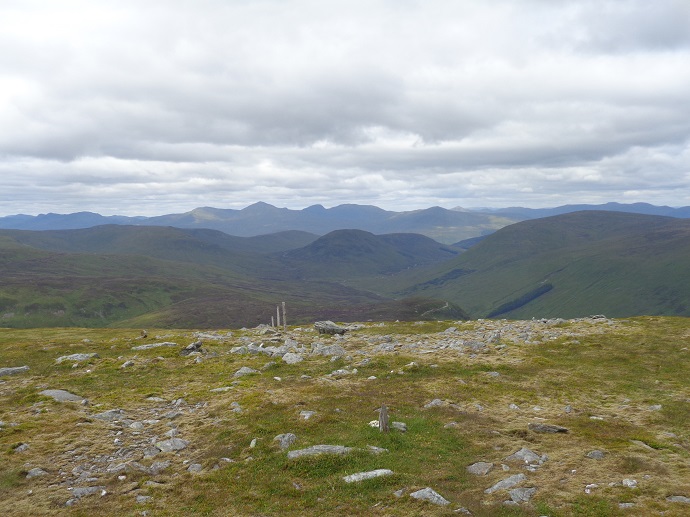 The hills to the north had only come into view from the summit ridge, but over to the west were the hills which had been in view behind me on the climb, prominently Ben More and Stob Binnein, which looked like they had turned their backs on each other and weren't speaking any more. 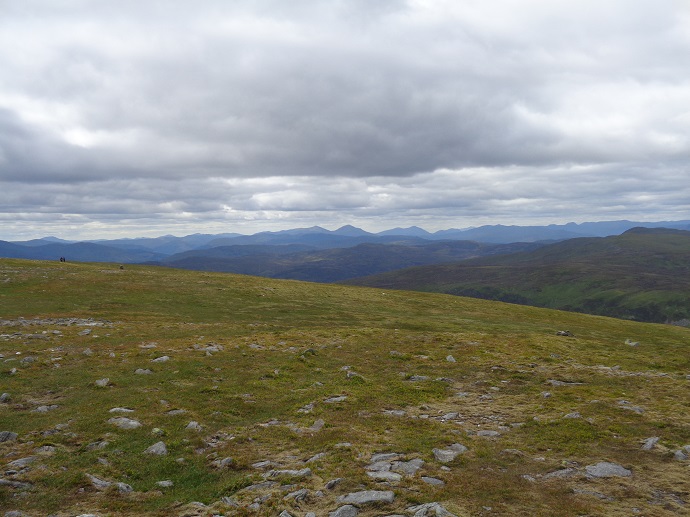 I had to walk over towards the edge of the little plateau to bring Loch Turret into view, but it was quite an impressive valley. 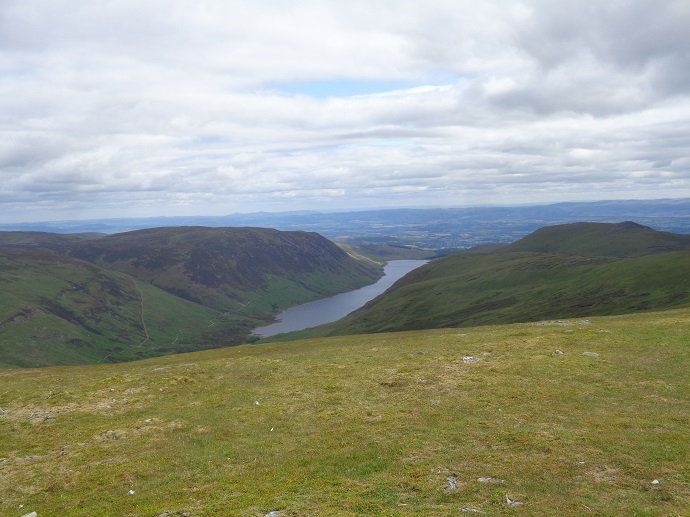 My plan for the way down was to head down the main ridge towards Meall na Seide and pick up the track which leads down from there - I wasn't sure how rough it would be, but it turned out that the fenceposts led off in the same direction, and a good trace of path followed them. 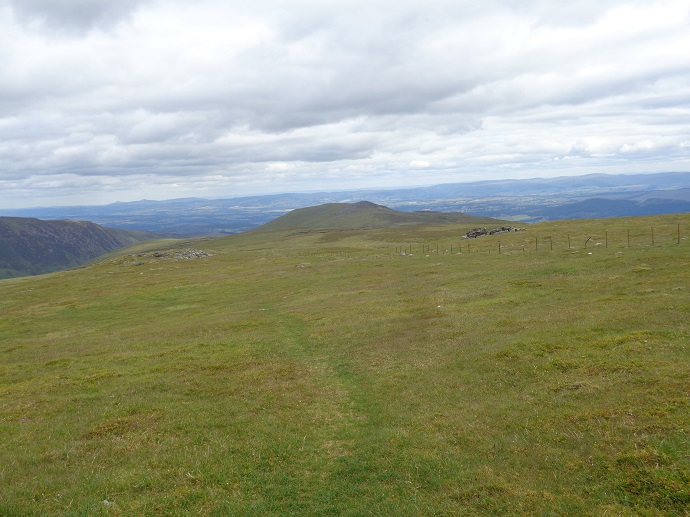 Keeping to the top

It was a very faithful path, following the fenceposts straight on through patches of small peat hags, but it was never desperately wet! 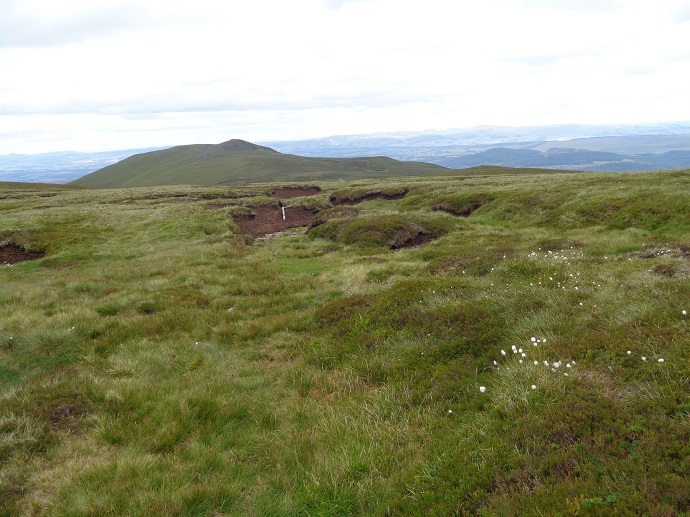 The little summit of Meall na Seide had a decent cairn, and a good view down over the farmlands of Strathearn. 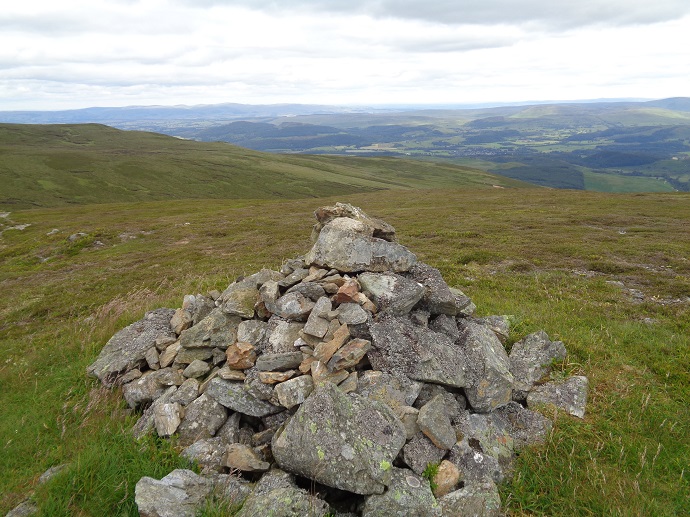 The track down started a bit below the top of the ridge, so when I came across a little heathery path which seems to be heading down I followed it, only to find it curling off back towards the way I'd come. So instead I went off cross country, heather at first, but getting a bit too involved in something that looked like ordinary moss but turned out to be a very young Carroglen burn, ankle deep. 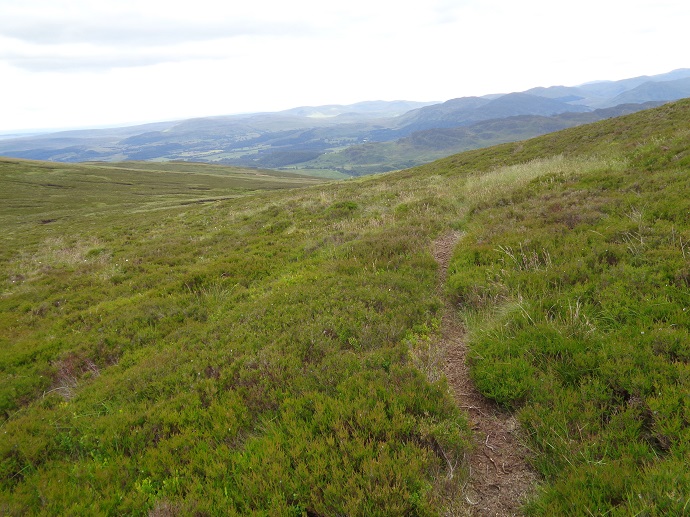 The track starts suddenly out of nowhere, but it's good once it gets going, running down parallel to the burn, which cuts itself out a deep little valley. 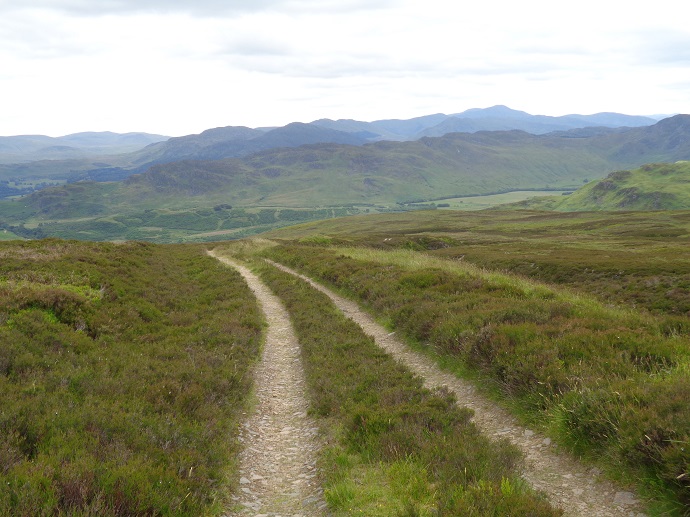 Just before the farm the track wandered through a field of cows, so I decided to detour through the sheep next door, which also had the merit of not taking me right past the farm buildings. Beyind that it's a farm road rather than a hill track, and there's a good view back to Carroglen tucked into a curve of the hill. 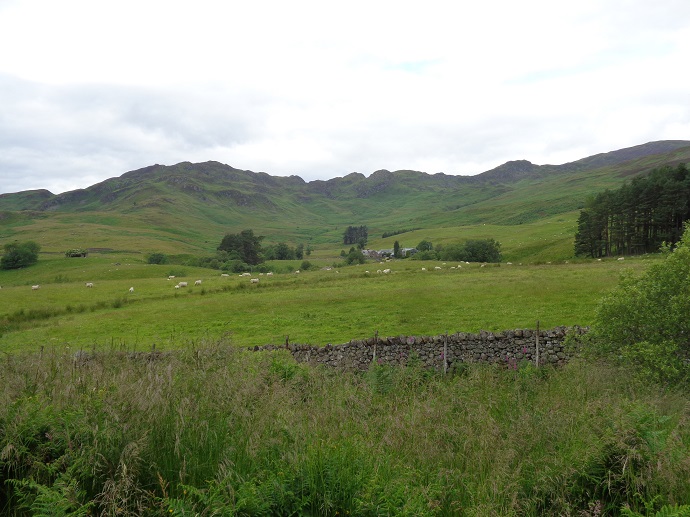 I knew I had to cut down to the river, but the track was perched much higher above it than I had expected, at the top of a steep slope. But further down, by two houses, there was a faint path leading straight over to the 'Shaky Bridge' - I liked the way it was built into the stump of a tree, but apparently until recently you walked right through the branches of the tree with the leaves around you. 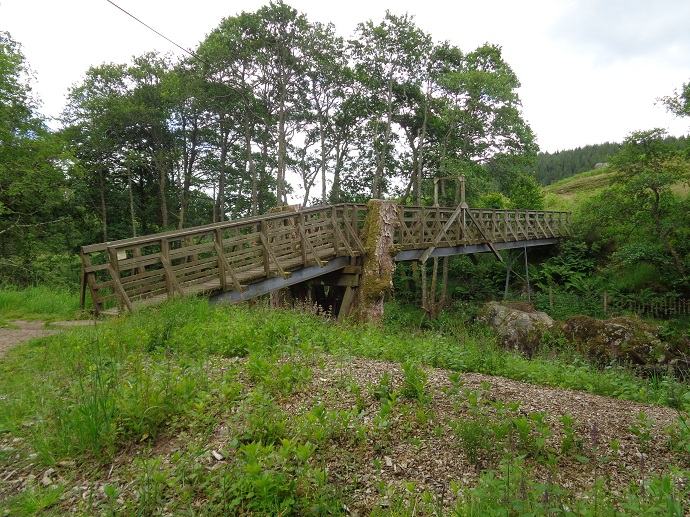 Although the bridge has been rebuilt, it still does shoogle in the middle, something I'm more used to with suspension bridges!

On the other side I was quite close to the sign for the Melville monument, a short but steep climb up through the trees to join a woodland path. It's a nice viewpoint, perched up above Comrie. 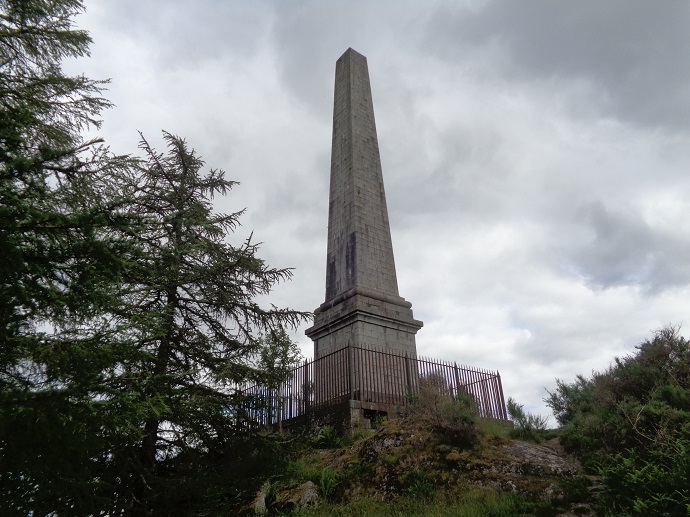 I had time to go for a drink when I got back to Comrie, but the hotel didn't have anything I particularly wanted to drink, so instead I went to the shop for chocolate and fizzy juice and sat on the pavement by the bus stop getting in the way, until the bus came along again.

So I've now climbed more Munros in one weekend than in the whole of last year (or any year), although to be fair it wasn't a very high hurdle!

That's a great way to do Ben Chonzie. I never even knew such a bus existed. Good to be able to do the hills by public transport. It doesn't happen often enough for me.
All the best.

Nice report
The route via Carroglen is really nice - much more so than the drab stony track from invergeldie - but so few people know about it.

Agreed about the summit - you think you're already there, but it's still a bit further away! Good thinking on the descent route, it looks really nice, and saves a lot of walking on the road. About Auchnafree Hill, it can be linked pretty easily, but I still found myself venturing further NW along the Ben Chonzie shoulder than I expected - the immediate E slopes are really steep for what this area generally looks like!

Sunset tripper: I think some summers it runs and some it doesn't, but if it does it makes a nice alternative for reaching some of the places along the way. And I have a (bad?) habit of heading off to places because I've just discovered a bus goes there!

past my sell by date: I wanted to do the usual route for the experience, and it was pleasant enough, but I did enjoy the alternative way down, despite boggy bits.

aaquater: I was quite surprised to look back and get a view of the far edge of Ben Chonzie dropping almost straight down! I expect I'll be back in the area...

How long did this take you all in all?