2 easy hills, then we were bitten on the bottom

2 easy hills, then we were bitten on the bottom


This was our first outing since Ratagan and ideally we would have liked to have headed north westish to tackle a munro or two, however the forecast in the NW was not clever so I suggested we head south and say hello to a few more Marilyns.
It is a while since Parminder has been off piste on the Marilyn trail so am sure he was looking forward to the experience.
Parminder volunteered to drive so I suggested we meet at the P&R in Inverkeithing at 9am as we didn't have too far to travel and the hills were fairly straight forward.
I turned up at 8.50 expecting to be first to arrive only to find Parminder and George waiting for me, so we tootled off into the multi storey parking area, loaded up and set off for the M8.
The plan was to turn off at junction 12 on the M74 only to find it doesn't exist south bound, so we came off at Abington and then headed north again for Muirkirk.

our_route.gpx Open full screen  NB: Walkhighlands is not responsible for the accuracy of gpx files in users posts
Cairn Table, return by the same route

We arrived at the "walkers" car park for Cairn Table which is near Kames race track and were soon on our way.

Car park not too busy

Good path to start, turns into grass further up but easy to follow all the way to the summit

Plenty of evidence at the start of the walk

Plenty of these over the mushy bits

Looking back to Muirkirk

Parminder romping up the hill without a McDonalds breakfast

The not so little cairn

Parminder inadvertantly demonstrating how big the cairn is, it has obviously been there a while as moss is growing on it

Looking eastish, with the trig in the foreground

Not sure what the large pile of stones are waiting for? 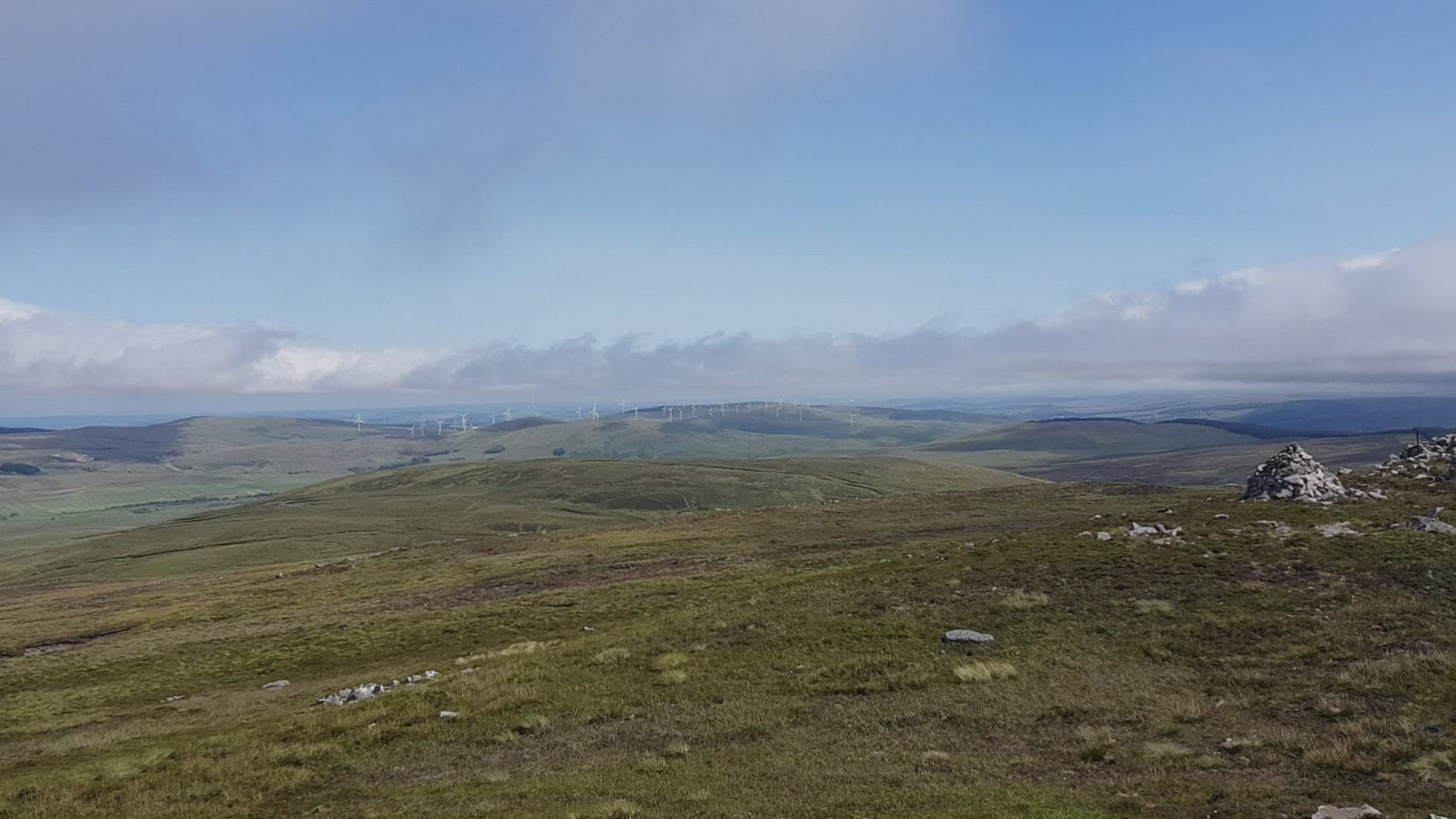 Video on the summit of Cairn Table, if you have sound you will be able to detect that is was a tad blowy

Heading down, nearly back at the car

Part of the old mine works

Cairn Table is an easy walk, not quite sure where the table is as we even took our lunch uphill, the cairn part of very obvious. Turned out to be a good initial walk which can be tackled in trainers as a family we met demonstrated.
We had lunch back at the car and then it was just a short drive through Muirkirk to our start point for Middlefield Law.

our_route.gpx Open full screen  NB: Walkhighlands is not responsible for the accuracy of gpx files in users posts
Middlefield Law

The car was parked on a single track road to the cattery which has a couple of laybys, our start point was just past a small group of trees.

Unfortunately we missed the faint path that runs up beside the trees, we opted for the direct route which turned out to be familiar territory for us hardened Marilyn walkers

Not sure what Parminder is doing?

Arty shot, the only tree in the area with the summit of Middlefield in the background

Parminder enjoying the off piste experience

We eventually picked up an ATV track 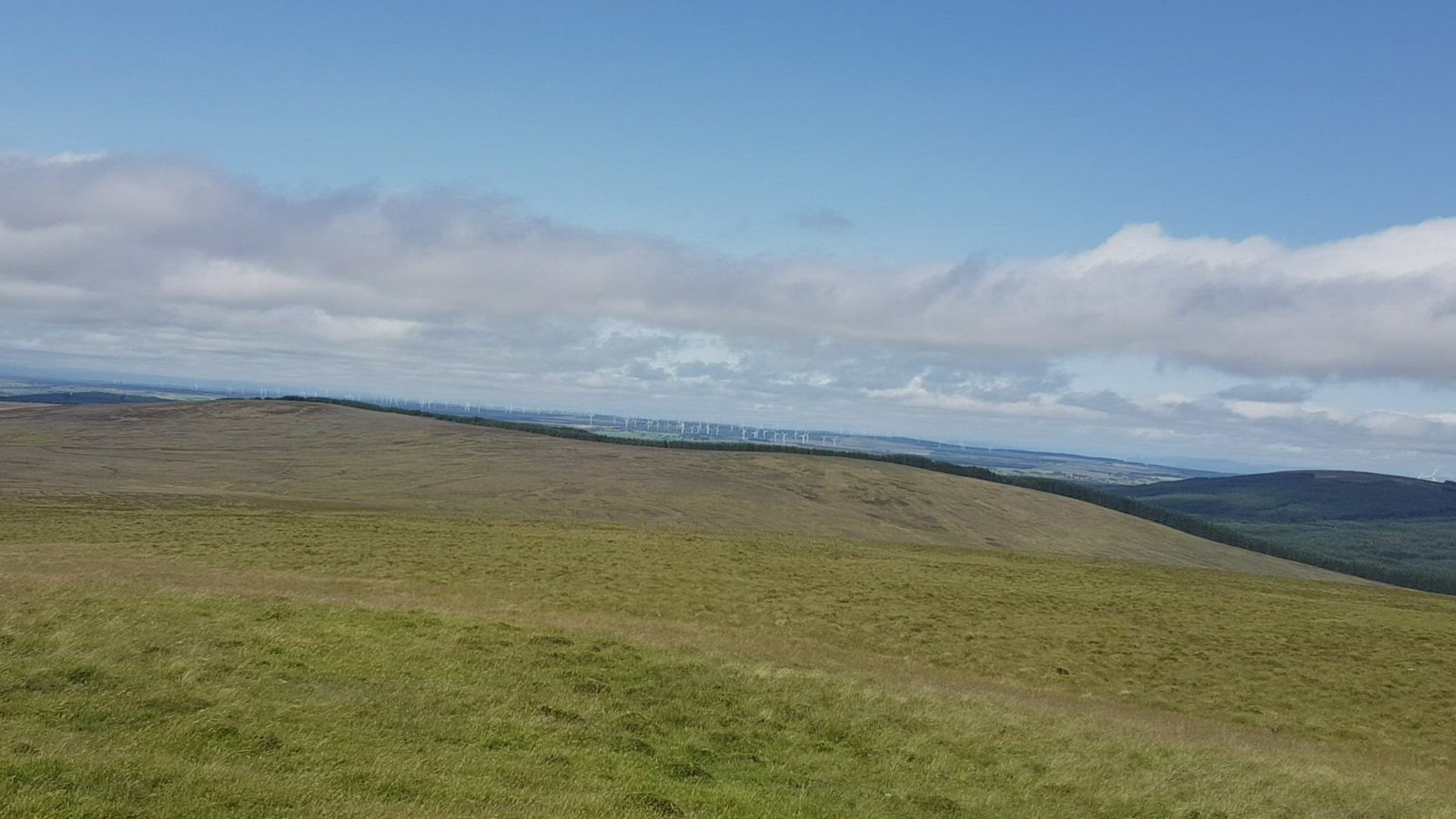 Video taken from on top of the cairn, was very windy

Middlefield Law was 40 minutes up even with negotiating the long grass and 20 minutes down, now it was onto our final target.

our_route.gpx Open full screen  NB: Walkhighlands is not responsible for the accuracy of gpx files in users posts
Nutberry Hill

I had a look at previous walk reports and a few other folk opted to park the car and in the general vicinity of Middlefield & Nutberry and walk the 2 as a loop. I had other plans, we drove the mile or so to the start of the track to Priesthill farm and parked in a nice parking spot just off the main road.

Parking spot, our route is in the background

Once you reach the gate, the going gets a bit more challenging

This is what is on the other side of the gate

At the start of our Nutberry walk I had worked out and hoped we would have the wind at our backs, however someone had turned off the wind. Walking along the track was fine as we were moving at a good pace, when we reached the rougher ground we were ambushed by all manner of flying little things that were intent on not only annoying us but were also wanting fed. It was also the hottest day of the year so far and not beeing the biggest fan of the heat I was really struggling.

This part was OK as the grass was shortish, unfortunately due to the terrain which was a gradual incline we couldn't really see where we were going and were following routes we had downloaded. We ended up going over Priesthill Height and climbing over the fence at the junction where 3 fences met. After that it was then a matter of following the edge of the trees northwards until the large and obvious gap in the forest was reached.

In among the long grass

Looking back, the pointy hill in the distance is Middlefield Law

The way ahead, keep the fence on our left and the trees on the right

Once the forest opening was reached we turned right, after a short distance a track is reached that goes from right to left and is of no use if you are intedning to visit the summit of Nutberry. On the other side of the track there is a quarry that was probably use to build the track. We crossed through the quarry and then the summit trig could be seen in the distance

The trig is there in the distance - magnifying glass required

Same photo without the photobomb

I normally take a video on every summit, but I was so knackered I couldn't be bothered and the flies certainly weren't helping.

Plenty of turbines to count 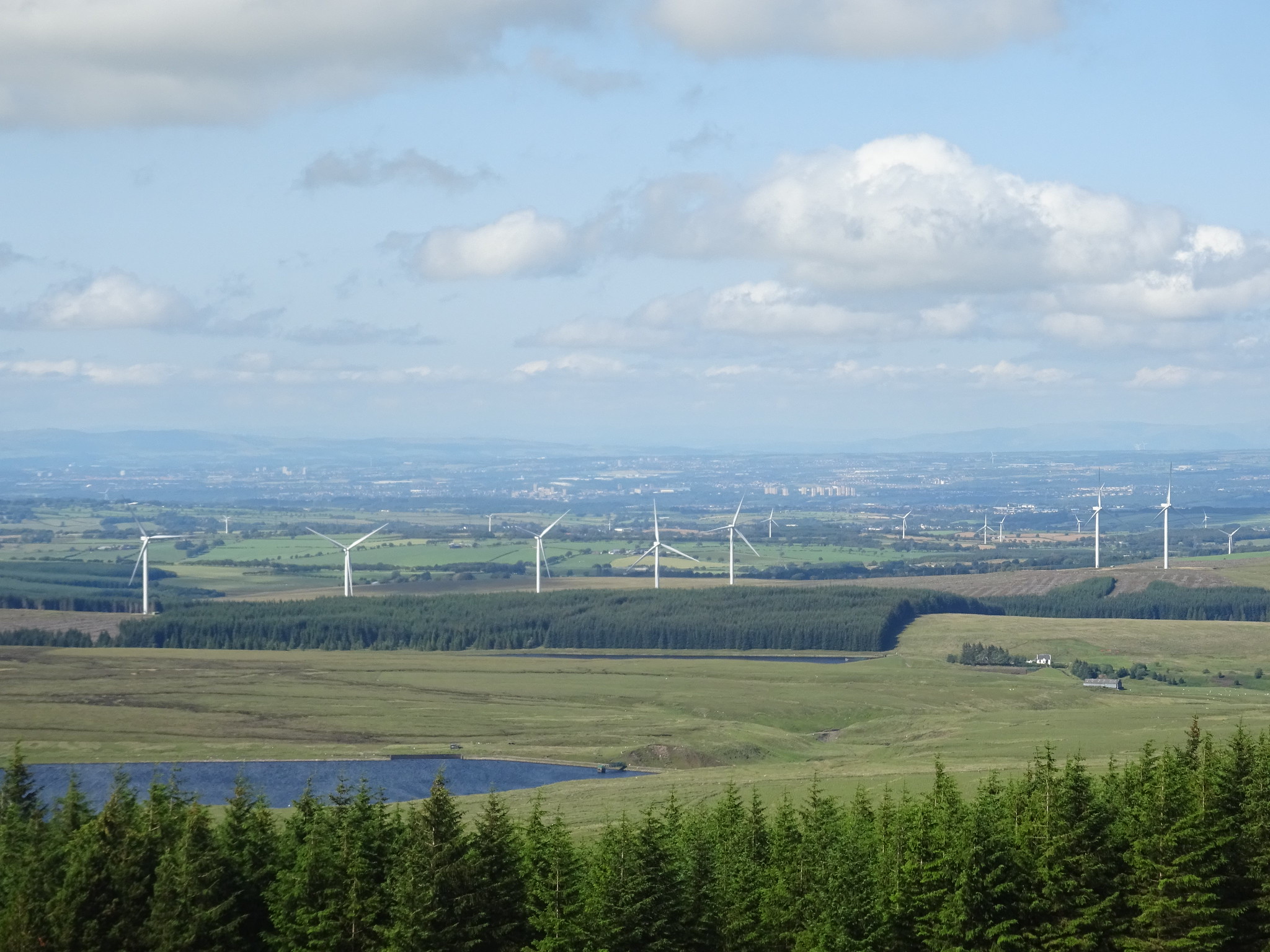 Camera photo, Kilmarnock in the distance 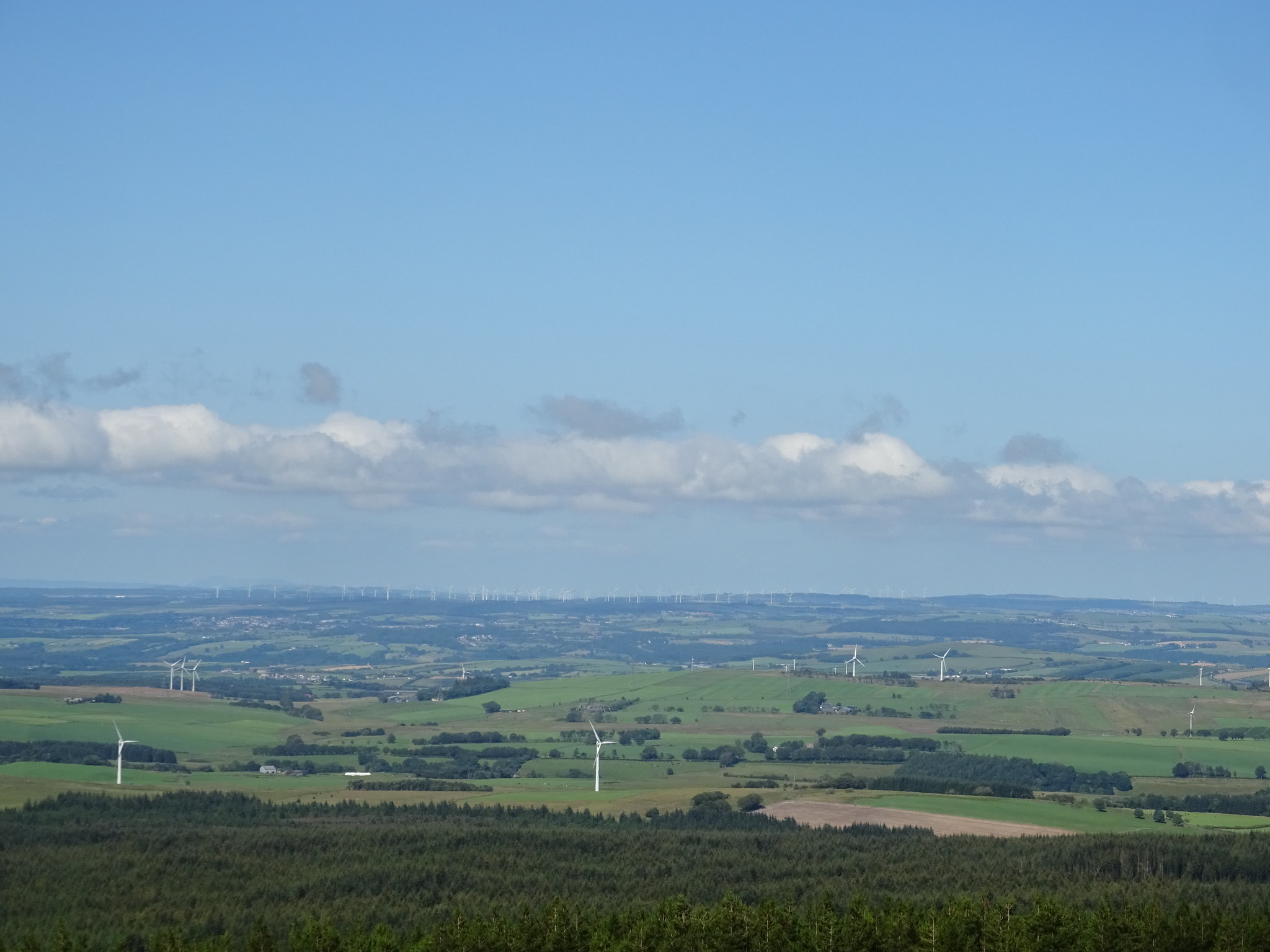 This turned out to be a much tougher day than we were all expecting, I should mention that the walk back to the car much easier than the walk in, a nice breeze was in our face so the flying annoying things had gone elsewhere to annoy something or someone else.
We got back to the car just before 6pm absolutely exhausted and rather thirsty, both George and myself had drunk all our liquids, luckily Parminder had a stash of water in his boot which was surprisingly cool. I say surpisingly as George and I had already shed a few pounds in Parminders mobile sauna, his car was excellent at circulating warm air, hopefully he will get the AC fixed before our next journey in his Beamer.
Thanks as always to both my walking companions and for being patient with my slow plodding pace.

Re: 2 easy hills, then we were bitten on the bottom

Good report Martin and love your insect photo opportunities, not often you catch them in shot. Just in case anyone wants to see John Brown's grave, personally I didnt think it was worth the detour.... so luckily I cheated and just zoomed in. 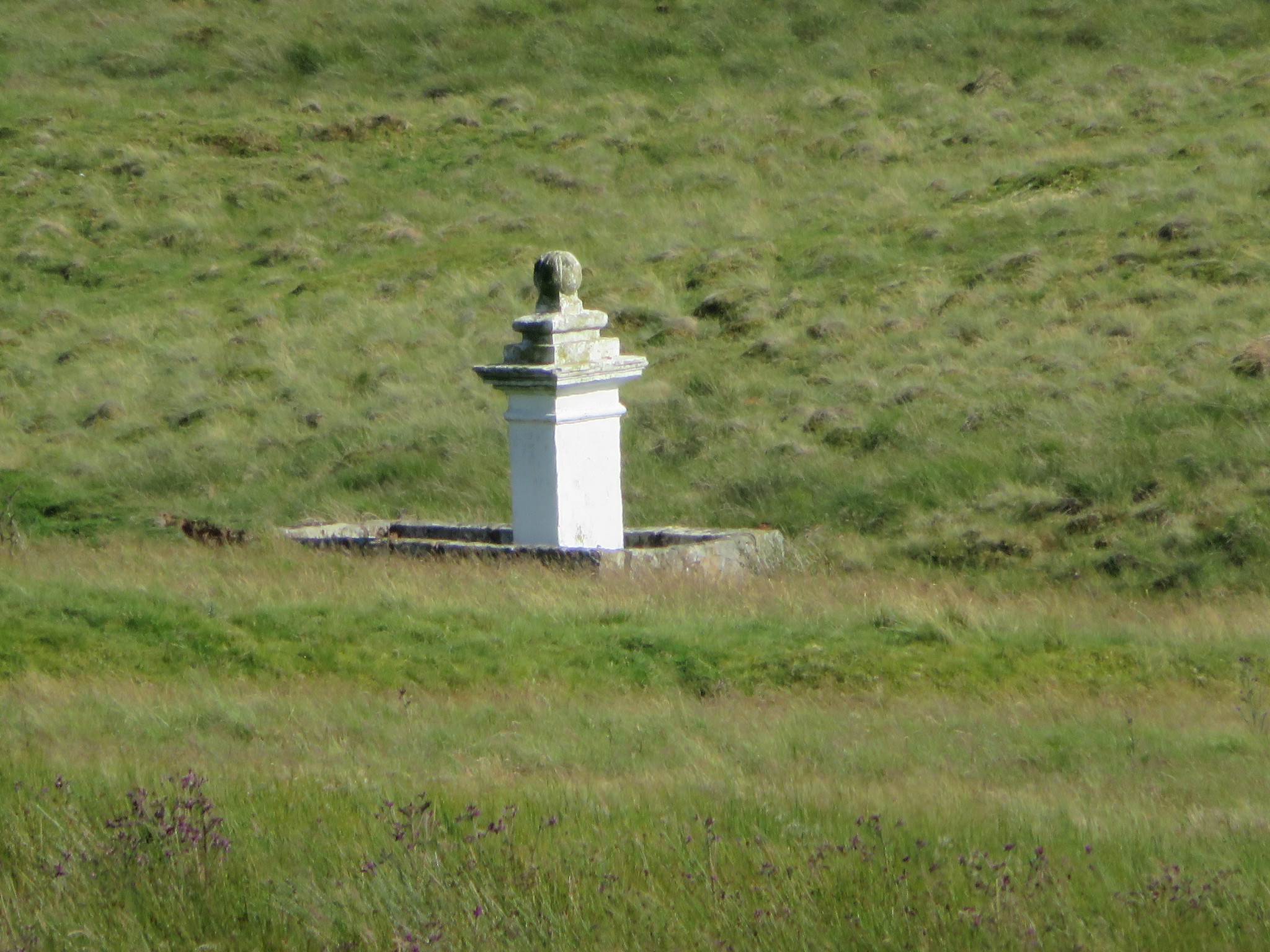 Oh and just in case you wonder who he is ...
John Brown (1627–1685), also known as the Christian Carrier, was a Protestant Covenanter from Priesthill farm, a few miles from Muirkirk in Ayrshire, Scotland. He became a Presbyterian martyr in 1685.

Re: 2 easy hills, then we were bitten on the bottom

Looks a nice area, but it sounds like you got bitten everywhere else as well - I was hoping it wasn't a mad dog!