The clock showed 6 a.m. when I woke up to a weather that looked just as bad as it was forecast. I spent the next 2 hours consulting all kinds of forecasts, looking at the hiking maps, pre-selecting routes and discarding them again, watching the rain radar, and generally feeling very grumpy and downcast. Finally, I opted for Creag Meagaidh, and it turned out to be en excellent choice for the day.

The parking was not too busy when I arrived. There were two men in the car next to mine. One remained silent, and the other told me that this was his third attempt to go up Creag Meagaidh, and that he hoped to succeed this time. My intention definitely was to succeed in the first attempt. From an arriving car, a third man with a yellow-orange jacket joined them with his dog, and they sped off.

There were no other hikers around, which may well have been due to the low clouds, it certainly looked like rain. Clouds, you cannot deter me - I believe in the power of the rain radar

The description I followed took a counter-clockwise route, so I had to turn right at a small cairn. When I noticed that I had missed it, I was already much too far along the path to go back. I tried to convince myself that it was anyway better to walk clockwise, and in the end I think it really was.
For those not wanting to miss the cairn - this is it (photo taken when I had come back down along this path). The path is really hardly visible. 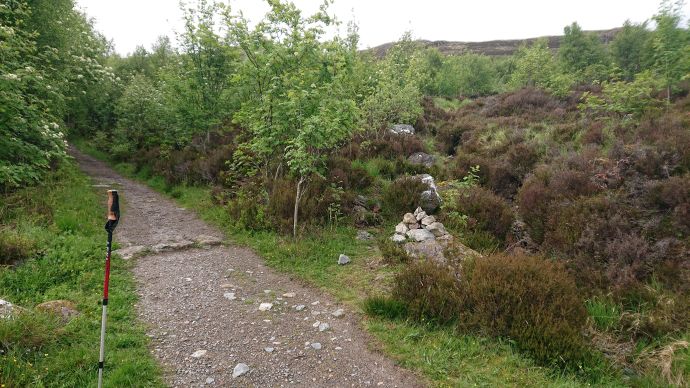 Call this a cairn?! What would Mad Meg say to this?

It comes soon after you pass a wooden bench to the right of the path, and soon after the path has become less steep.

As I continued on the excellent path, it rained, which made me sweat a lot underneath my raincoat.
The "Window" was soon visible at the end of the valley. 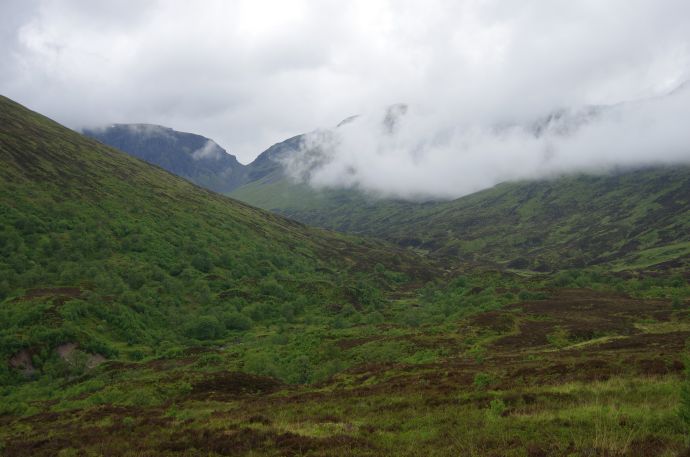 A Window below the sky

Approaching Lochan a'Choire, the clouds were still low, but began to thin out.

From here on, it was quite chilly and windy, and I had to put on my jacket underneath the raincoat, and the headband. Needless to say it made me sweat even more. The climb up the Window was not too difficult, but I was glad to have to walk it up and not down. 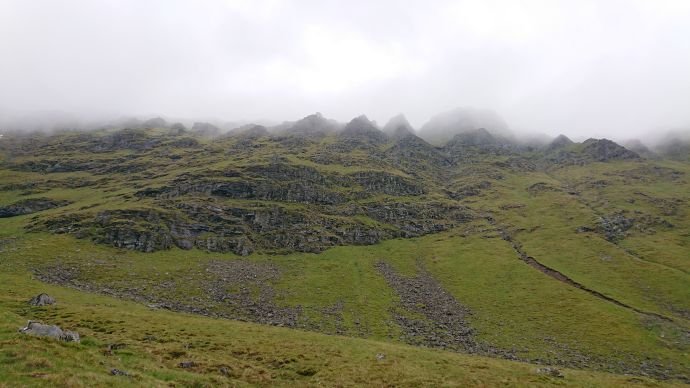 The "pyramids" of Stob Poite Coire Ardair, nice visual effect made by the low clouds A final attempt by the clouds to close the Window 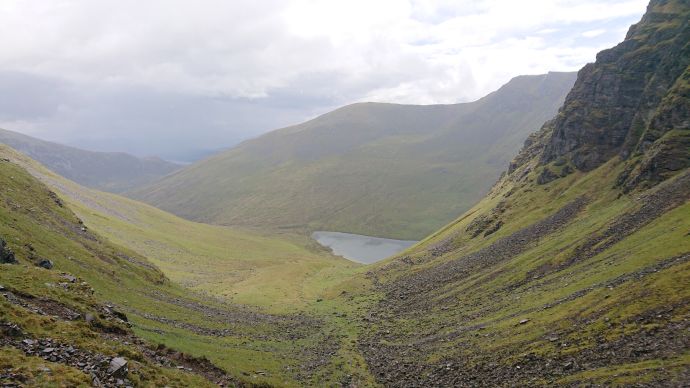 Looking back towards the Lochan

Arriving at the Window, the clouds gave way to allow the blue sky to shine through right at the moment I came up. I felt elated by this perfect moment, and all grumpiness of the morning was forgotten. Arriving at the Window 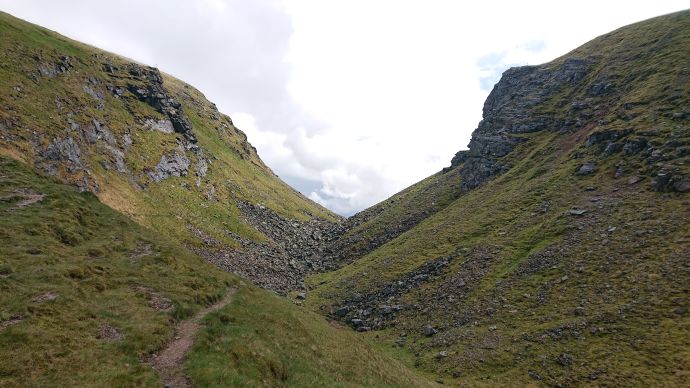 I could see the summit of Creag Meagaidh appearing from and disappearing behind the clouds, and started climbing up to the summit plateau along the edge to the Coire.

Panorama: Looking over to Stob Poite Coire Ardair and down to the Lochan (click to see large)

Up there, I met a young couple who had spent the night at the Lochan (no midges, they said), and had already been to the summit of Creag Meagaidh, free of clouds.

Looking over to Stob Poite Ardair, I saw three tiny hikers, one possibly with a yellow-orange jacket. Also visible on the way up: Carn Dearg - red indeed

I soon passed the impressive ancient cairn called "Mad Meg's Cairn". I wondered who Mad Meg was and if there really was a person called Meg, or if it was just derived from Creag Meagaidh --> Meggy --> Meg. Later Internet research revealed only one possible explanation:
"Mad Meg's Cairn. According to local legend this mysterious cairn marks the grave of an 18th Century suicide, who was denied burial in the local kirkyards. Her family buried her high on Creag Meagaidh. The old stone walls of the cairn have collapsed, showing that a considerable volume of sandy soil had gone into the making of the cairn."
(Bill Copland, https://www.geograph.org.uk/photo/100577, retrieved 2019-07-28. Cameron McNeish seems to use the same source in his blog entry some 7 years later: https://www.google.com/url?sa=t&rct=j&q=&esrc=s&source=web&cd=10&cad=rja&uact=8&ved=2ahUKEwjOxa7h3dfjAhUIy4UKHRluBI8QFjAJegQICBAB&url=https%3A%2F%2Fcameronmcneish.wordpress.com%2F2013%2F12%2F20%2Fstradding-druim-alba-creag-meagaidh%2F&usg=AOvVaw1pPNd52jeTTW5BDFPAjfv3, retrieved 2019-07-28) Mad Meg's Cairn - not the summit

When I finally arrived at the summit, the clouds had come back down again, but I didn't mind - I had seen it from further below. After a brief pause, I went back down across the plateau. Coming up a certain distance to my right, I saw three persons - but no yellow-orange jacket, and certainly no dog. Was it them? If yes, what had happened to the dog? There were no other people around, and I couldn't make sense of it. We waved to each other across the distance and through the mist. 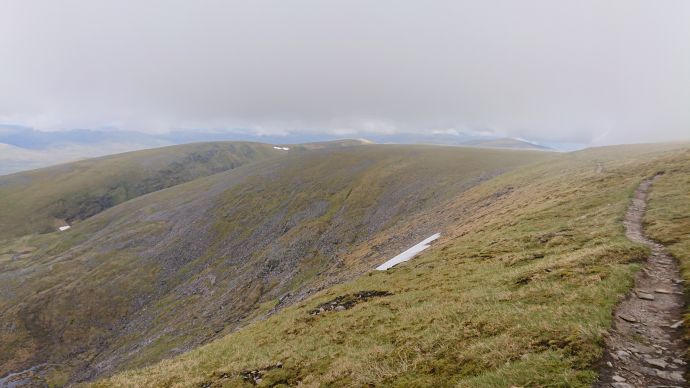 I was soon back down to the Window, and easily up Stob Poite Coire Ardair. I wasn't sure which of the two cairns the real summit was, so I made sure to perform my secret summit ritual at both cairns. 4 cairns in one picture - Stob Poite Coire Ardair where my backpack is (or the one visible further in the distance?), Mad Meg's Cairn on the other side, and even Creag Meagaidh's summit cairn (very small) The path along the ridge towards Carn Liath was easy going, and it remained mostly dry except for a few raindrops now and then. There were fresh bootprints, but no paw prints. Hmm...
Easy going, yes, but quite far (5 km), and it took me a while to get there. Approximately half-way along the ridge, near Coire a' Chriochairein Looking back from Carn Liath to Creag Meagaidh Looking back the way I came

Almost all the way down from Carn Liath, I was puzzling over an expression in the walk description of another walk I had in mind for today but rejected (the Creag Pitridh three, and I was glad about the decision, as the weather looked quite bad over there all day). It said in one place to "make a bee-line" over some boggy ground. As a non-native speaker of English, this confused me. Did it mean to go in a straight line, like a bird's flight, or did it mean to go from good spot to good spot, avoiding the deep bogs, just like a bee would go from flower to flower, not necessarily in a straight line? I was inclined to believe the latter, but later back in my cabin the Internet told me it was a straight line. Personal lesson learned - never use imagery in instructions or manuals (in my other life, among other thins, I explain technical stuff to international people).

Bee-line or not, I kept losing the path going down from Carn Liath. Behind Cnapanan, all was mud and more a stream than a path. And there were paw prints going the other way! So doggy had at least come up here... but then?

The mystery remained unsolved - the two cars of the dog group were already gone when I arrived back at the parking lot. 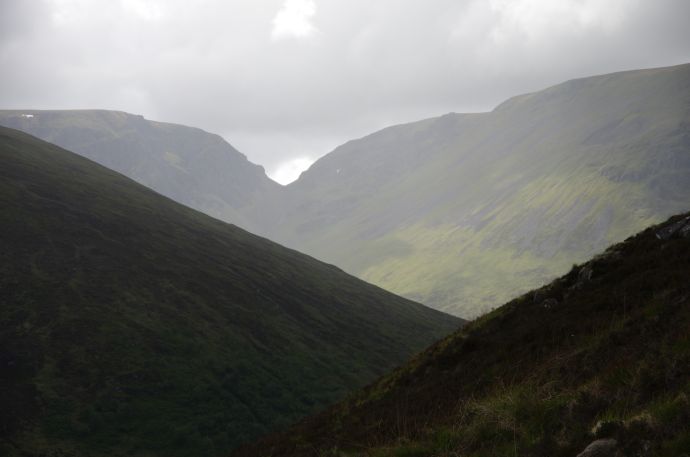 Looking back to the Window 20190609.gpx Open full screen  NB: Walkhighlands is not responsible for the accuracy of gpx files in users posts

Re: Mad Meg, Dubious Dog, and the Bemusing Bee

That brought back recent memories.Lovely walk.

Would totally agree that going up the window would be the better option.
Unfortunately we turned right at the cairn and went Carn Liath first.

Thighs were screaming by the bottom of the window.steep and slippy.

If it was a small dog may have been carried in rucksack with its head poking out,have seen that a couple of times.