A fine day, but with Harvey on holiday it was only GordonC & me.

Parked up at Keiloch, paid our £3 fee, then set off up the Purple route towards the S ridge of Craig Leek.
The only other couple in the carpark were heading for Beinn A'an via the Culardoch bealach and Glen Gairn.

A very pleasant walk up to Bill's seat and a pause to admire the view down Felagie. The view down Felagie from Bills bench

We struck off the "purple route" ( as advertised in the car park info board ), up the steep hillside through the trees. At the top of the steep bit we encountered some heather, but by sticking to the rock outcrops we avoided any serious moose-stepping.
We crossed the march dyke, which straddled the S ridge and followed a path up to the top. GordonC on the path through the march dyke Looking back down the S ridge of Craig Leek

The views were simply great - Beinn a Bhuird & A'an to the north, Morrone to the west, Lochnagar etc to the south and Morven to the east. As this was our last HUmp in the area, we could tick off all the hills in sight. ( smug gits )
We gave big Jim Lyon a shout and wave over on Creag Choinnich just across the way, as his ashes had been scattered there last month. GordonB poses for his summit pic

I'd promised my good lady that it would be a short day today, as we'd no dog to walk, so we headed off down the path to the north ridge and quickly encountered the dyke again with a very convenient path alongside its east side. We continued to be amazed at the cheils who made this dyke many years ago - some bits of which were still proudly standing. Looking back up the N ridge of Craig Leek Lochnagar from near the "orange route" bealach

Lower down we cut across to the "orange route" intersecting our descent path at the bealach - finding a fine ATV track to guide us along.
At this point, GordonC turned to me and said out loud what I was thinking - that this descent route was probably the easiest way to do Craig Leek, with track and path all the way up to the top and a gentler ascent ! Further down the orange track we saw lots of black butterflies, but the wee buggers wouldn't stay still long enough for an ID photo and when they did, we only got a glimpse of some red on the upper surface of the wings - a la Red admiral, but half the size. On the other hand, the Brown fratillary ( I think ) was more obliging. 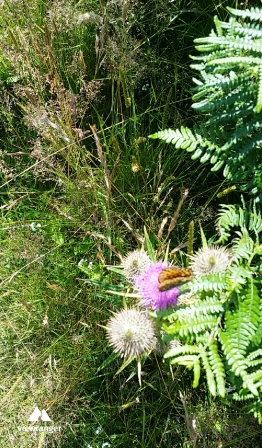 A Brown fratillery feeding on a thistle A "skull" mushroom on the orange route track

The orange track was followed down past some beehives on the floor of the glen. We stopped to inspect the carved memorial stone to Alison Gourdie, who had some rowan trees planted in her memory near the Guide Cottage at Felagie. GordonC went off to inspect a structure in the woods behind, but it turned out to be a cesspool or similar !
The car park was pretty full when we returned, but we never saw anyone on the hill !
An ice cream in Ballater was our reward for the day - scrumptious !

As we drove home down deeside, we laughed in the face of the approaching clouds from the safety of our mobile metal cocoon !
Another successful day for the weather fairies. I may even have a tan by the end of summer at this rate.......