I do love the smell of deja-vu in the morning! Fast forward 24 hours. Here I was again - back at the Morvich bunkhouse in the company of a Mr J. Wilson from Yorkshire. No Bod. No Sue. But there were four others with us - Jim, Tommy, Steve K and Geoff the Tinman. Mr Wilson and I appeared to have been talked into repeating our walk up into Gleann Choinneachain and across the Allt a'Choire Chaoil, except this time we would continue up to the Bealach an Sgairne and onto A'Ghlas-bheinn as opposed to Beinn Fhada. That hill is so yesterday!

We were not being Purists today so we drove all the way along to the hostel and parked up on the verge before following the familiar route up into the glen to my new favourite river crossing. There were no forestry operations going on across the glen (maybe a body had been found!!!!???? I again availed myself of the iron bars as did a few others but Mr W again opted for the stepping stone method. Safely across, we tackled the switchbacks of the stalkers path up to the junction again but this time carried on up towards the Bealach an Sgairne. Path snaking up towards the bealach Tommy gazing back down the glen Shades of the Lairig Ghru

The pull up through the upper reaches of the glen as it narrows towards the bealach felt to me a lot like parts of the Lairig Ghru, which I particularly appreciated as I have so far this year not done my seemingly ritualistic annual DofE expedition through it (for the first time in about 6 or 7 years, although the year is still, like myself, fairly young!) OK, middle aged then!

From the bealach we set about the long knobbly, undulating ridge up onto A'Ghlas-bheinn, one of the lowest of the Munros at a modest 918 metres in height. Sue and Bod had told Jonathan and myself only yesterday about this ridge - how it goes on and on in a seemingly never ending series of knolls and false summits, but for all that, it was a thoroughly enjoyable walk. In fact, just the kind of bimble up to a Munro summit that I love. The gang at the Bealach an Sgairne Loch a'Bhealach from a different angle to yesterday 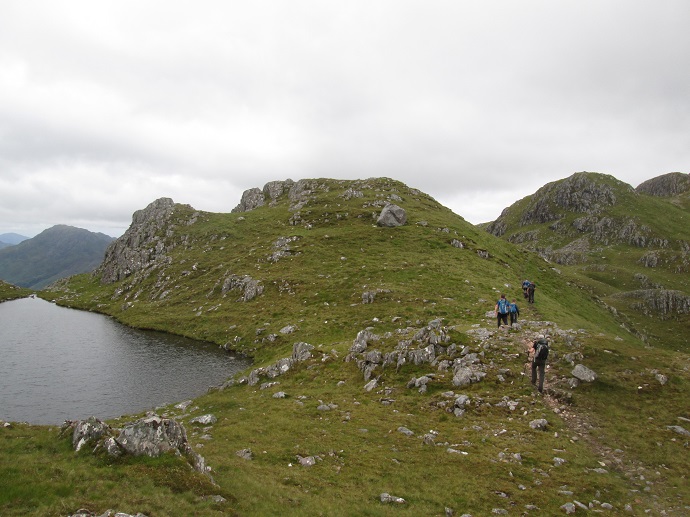 Right up my street One of the many ups and downs Loch Duich and Sgurr an Airgid The sense of deja-vu returned shortly before we reached the summit when we again entered the clag zone, although talk of shandies (or indeed full fat ales for the four of us not driving!

) had not yet started if memory serves. Damn GLW once again - he was here only a few days ago and clearly left his clag behind! After a spot of lunch (during which we all wrapped up well against what was now a biting wind chill more reminiscent of March than July), we picked our way down tricky slopes to the north, snaking between the falls on the Allt an Leoid Ghaineamhaich to our left and the craggy bump of Meall Dubh to our right. Heading north off the summit Sgurr an Airgid and our way home

Once safely onto the path at the Bealach na Sroine, I had a penultimate sense of deja-vu as a discussion started up about whether to head back to the pub or continue on, in today's case meaning a detour to the Falls of Glomach. The pub option got the vote, unanimously, and so we headed down the path into the forestry, a little to quickly for some! Jim and Tommy with cold beers on their minds

We passed a baby deer tucked up below some thick fern cover at the side of the forestry track before the route took us through a field and then across a footbridge over the Abhainn Chonaig to rejoin our inward route - the fourth time that myself and Jonathan had now done this stretch in either direction in little over 24 hours! However you may have a point with Fhada tho