Roasted to perfection on Beinn Ghobhlach

Roasted to perfection on Beinn Ghobhlach


Having sweated the whole night in a tiny room in an Inverness B&B, I was driving up to Aultbea to meet up with friends. I decided to break my journey with a detour to Badrallach to climb Beinn Ghobhlach, which, in retrospect, given the intense heat, was maybe not such a good idea. Perhaps the day was better suited to a visit to Mellon Udrigle beach. Anyway, having parked, I walked along the Scoraig path until the fence on the left ended. From here, it was take to the open hillside, aiming just east of pt.338. The 'enticing' hillside from the Scoraig path

I'd like to say that I enjoyed this scramble up the steep hillside and outcrops - but I can't. it might only have been 0.6km but it felt a lot more. Eventually, I reached the crest and got my first view of the hill. The isthmus and the lochans

I still looked a fair distance away across the isthmus between the two lochans but things got worse when I had to descend to walk across the rather marshy isthmus to reach to foot of the last section. By now, the heat was so intense that on several occasions I must admit I nearly gave up but somehow or other I persevered and found a stony path for the very last section of the climb. Nearly there - but still tough

Reaching the summit, I'm sad to say brought little elation - just total fatigue and a realisation that I had an equally hard walk out in the stifling afternoon heat. 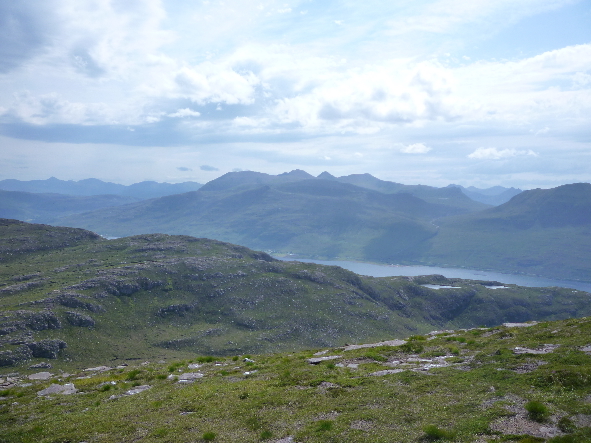 On the summit looking over towards An Teallach Back through the lochans, past pt338 and then a descending traverse through the crags brought me back down to the Scoraig path with a mercifully short stroll back to the car, which was doing its best to replicate the conditions in a microwave. I was glad to reach Aulbea and get into a cool shower. Never again in such heat I vowed ..... until two days later! Re: Roasted to perfection on Beinn Ghobhlach

Don't be so bloody ungrateful!!!!!! You could have got what I got on this one!