In terms of the driving time, this was my most distant remaining Corbett and I had never explored west along the A829 from Aberfoyle. I tried to book Thomas and I into the Inversnaid Hostel, but it was fully booked except for a caravan and camping outside and Thomas did not fancy either of those options. As it was, Callander Hostel probably turned out to be the best option, due to its proximity to restaurants and it being closer to the second hill of the trip, Beinn Stacach. The staff were very helpful, though the TV did not work and some areas were not in use due to a refurbishment. With the dormitory window open, it could be a little bit noisy. Living up a country lane, there is very little noise in the early morning, so Thomas and I are not accustomed to so much street noise. It was a beautiful drive to the start of the walk. We stopped just once for me to take a photograph of Loch Arklet with mist clearing off the Arrochar Alps.
We had a change of plan. The original route was to do an A to B and cycle back to the car, but Thomas has outgrown his bike, so we switched to the route described in the SMC Guide to The Corbetts And Other Scottish Hills, starting and finishing near to Corriarklett farm. There is a wide gateway to a gateway, where a track heads out to a green barn and there is ample space for a couple of cars without obstructing the entrance.

​Thomas was flapping about and making a fuss due to insects "attacking" him. I was most unimpressed, commenting on the difference in size between him and the insects. A large fly landed on my trouser leg, which I photographed before brushing it away. Probably Tabanus bovinus, though I gather there are 30 species of horse-flies in the UK. As the name suggests, they prefer cattle and rarely bite humans and, of course, only the females bite! Frankly, Thomas was not looking very enthusiastic. I sometimes feel that it would be an easier introduction to hillwalking if I took him up Munros by way of established paths. The Corbetts really are harder! The route passes through the "garden" of the farm house and I had anticipated encountering an unrestrained barking dog or two, but all was quiet. I am of the impression that nobody lives at the farm.

The best way forward was by no means obvious. There was little sign of the passage of human feet and after negotiating a few couple of fences, opted to take a line to the right of the burn flowing down from Maol Mor. The going was soft and long grass/bracken mix leads to concerns about picking up ticks. The ascent was both steep and pathless. It was not the sort of ground where you would just sit down, so the occasional boulder acted as a welcome bench on which to rest for a while. Thomas is always fast off the blocks but it is never long before I find that I am leading the way up the hill.

Looking back across the Loch Arklet dam and the Arrochar Alps beyond. Loch Lomond lay between the camera and the other hills but only became visible on approaching the summit of Bainn a'Choin. The panorama below the photograph acts as a reasonable match and confirms my original ideas regarding the identities of the peaks. This time looking across the eastern end of Loch Arklet, with Ben Venue left and Dumgoyne can just be made out in the far distance. It was curious that with the lack of any obvious path, there should be such a well-constructed style. Some of the steps were rotting so I instructed Thomas to place his feet near to where the rungs were nailed rather than in the centre. A beam supported at both ends is always weakest at its centre.

​Glad to say that Thomas was beginning to look a bit more enthusiastic! It is understandable that Thomas thought that we were at the top of our hill. A triangulation pillar always gives a sense of importance to a place. Thomas takes little interest in looking at the planned route on the map beforehand and just prefers to just walk without having to use his brain too much! I hope that in time, this will change and I can develop his map reading skills.

Thomas immediately mounted the pillar and I angled myself to ensure that Loch Katrine was in the background. Thomas seems to do fewer miles per cereal bar than I and he seems to be eating and drinking at every stop. The ridge undulates a bit before reaching a wide bealach and following Argocat tracks onwards. Eventually, there is a slight path and the summit comes into view. The pointed peak to the right of the photograph is Ben Lui. We took summit photos of each other before setting up the tripod and doing a 12 second shutter delay. Rather pleased with this one of Thomas! He looks positive and like he might actually be enjoying it! This is my favourite photograph of Thomas and I.

We rested well on the summit, but I was aware of thunder storms being forecast for later in the day. I did not want to have to worry about being struck by lightning and I preferred not having to put on our waterproofs. There were a few drops of rain on the way down but the proper rain did not start until back in the car and driving back to Callander. Thomas here is surrounded by the yellow flowers of Bog Asphodel. Narthecium ossifragum - The Latin specific name means "bone-breaker", and refers to a traditional belief that eating the plant caused sheep to develop brittle bones. The probable origin of this story is that sheep eating a calcium-poor diet are likely to develop bone weakness, and N. ossifragum favours acidic low-calcium soils. 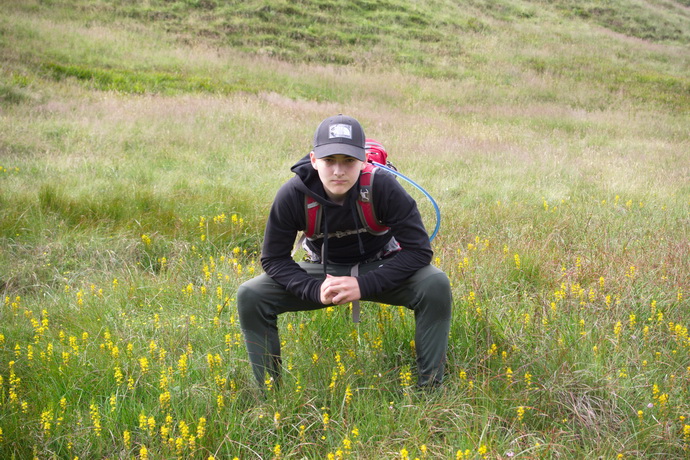 Arriving back at the car, we first checked out the Top Bunk Bistro to check out where we might have stayed had the bunkhouse not been booked up. Driving back past Loch Arklet, I missed the right hand turn and ended up at Stronachlachar. I'm told that there are a few of these around the UK at the moment but this is the first time that I had seen an old telephone box used to keep a defibrillator. What a fantastic idea! Other uses have been as book exchange/libraries such as one in Dorset, as florists in Brighton, to sell seaside buckets and spades in Yorkshire and as a disco in Devon! Having driven back to Callander in the rain, the weather brightened up by the time we set out for the Chinese restaurant. I thought that Thomas had ordered too much but he ate every last morsel!