Not a problem at all, we had fun traversing the other duo as well (especially on the way down, when my boot split in two - Karrimor is no longer a reliable brand name!) but I kept thinking about visiting the other half of east Etive ridge, considering different routes. In the end, we opted for the classic traverse: up the NW shoulder, down Coire Odhar. The ridge in the middle, called Glas Bheinn Chaol, looks like an interesting alternative, but for our plans of bagging the two Munros it was inconveniently situated. I'm entertaining the thought of doing Glas Bheinn Mhor via this ridge in winter conditions - if we can get to Glen Etive in winter, that is

Our route traverses one of the most entertaining ridges I've done so far. there are brave souls who attempt all 4 Munros in one go. Hats off to them, we were knackered after climbing just the two

Track_BEN STARAV 08-07-19.gpx Open full screen  NB: Walkhighlands is not responsible for the accuracy of gpx files in users posts
As Kevin says, Glen Etive is a superb area to climb, but an awful one to park

We were lucky, arriving at half past eight, there was still space in the small car park near the start of the track leading down to Coiletir. From the starting point, we could see the ridge we were about to attempt, and I was eager to start walking!

River Etive from the bridge to Coiletir - peace, tranquility and total solitude 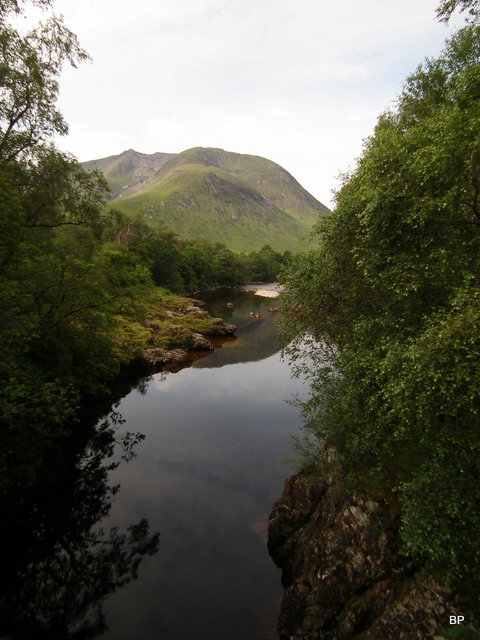 It was Monday so not as many tourists about, but we could see other walkers well in front of us. We were the last ones to leave the car park, not that I cared. At least we wouldn't be overtaken by some overenthusiastic teenagers (which makes me want to kill them and steal their kneecaps - maybe I'm turning into Caberfeidh???

).
I remembered from our previous visit, that the initial stage of this walk is very boggy, but to my surprise, the biggest obstacle was not bog but overgrown bracken: 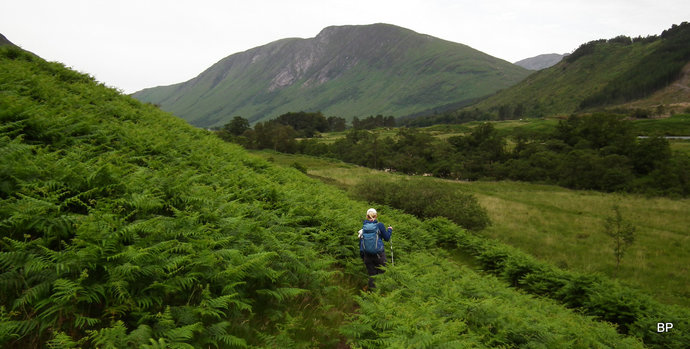 We crossed the bridge over the Allt Mheuran and continued on now dry and obvious path:

Glas Bheinn Mhor looks majestic from this side: Before I continue with my description of the superb climb up to Ben Starav, a little rant from an angry cat. Not a very tasty subject, so you are allowed to skip this part, dear reader

As we climbed up the NW ridge, I spotted a large boulder. It seemed that it would be the only sheltered spot for a long distance suitable for a wee break (figuratively and literally

). Well, if a lady needs to go, she needs to go. I bet I wasn't the first person using this boulder as a hiding spot, but I was utterly disgusted to find dirty sanitary towels scattered around. I simply can't understand such behaviour and it left a bitter taste in my mouth for the rest of the day. Dear hill walking ladies!!! Take your litter home with you!!! It only involves taking an extra plastic bag to carry it. I don't even want to speculate how long that kind of rubbish takes to break down. It surely has NO PLACE in the wild environment. Rant over.
Panther not happy: The sour taste in my mouth was soon sweetened by lovely views from the higher part of the ridge:

We followed an obvious path. The first half of the climb feels a bit like a slog, but as soon as we saw the final part of what was yet to come, we were double excited, it looked like a superb ridge!

The last 200m of the ascent route goes up more bouldery terrain... 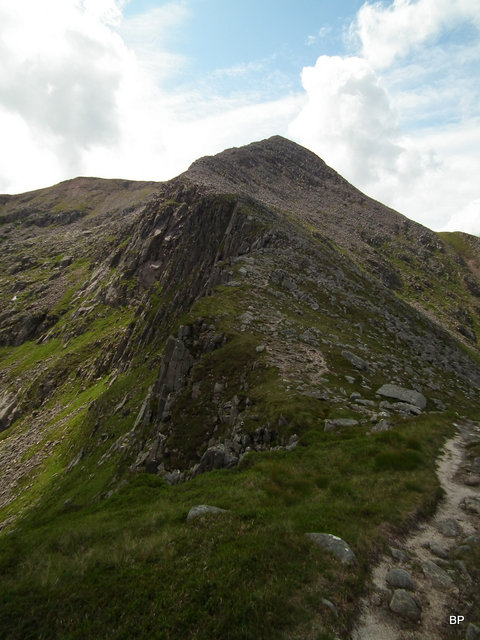 ...and looking down the ridge gave us a good perspective of how rocky this mountain really is: 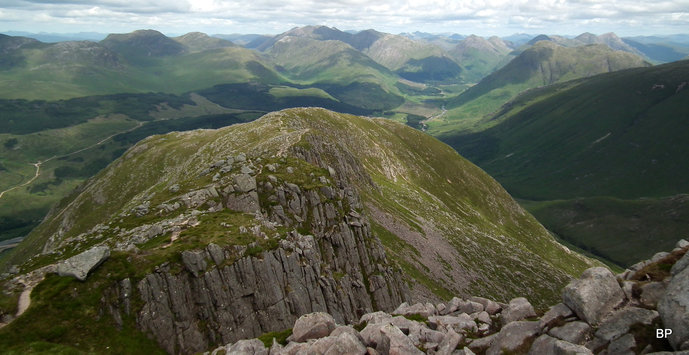 ...but no real scrambling is involved, it's all just boulder-hopping and a faint path can be followed most of the time: 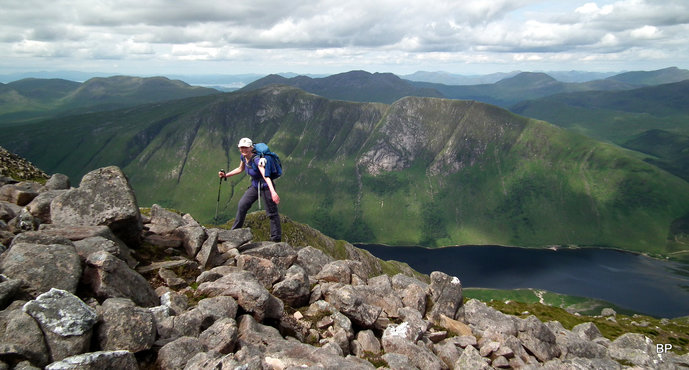 Loads of fun with rocks and boulders Soon we reached the summit of Ben Starav, a new Munro for both of us, Kevin's M no. 258: 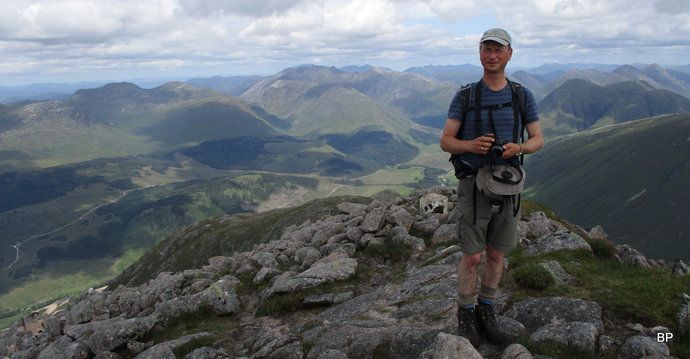 I'm one behind, but still the new summit ticked! Officially, 91% of all Munros done

Wee Lucy on her 116th Munro, Kevin bewildered by the views: 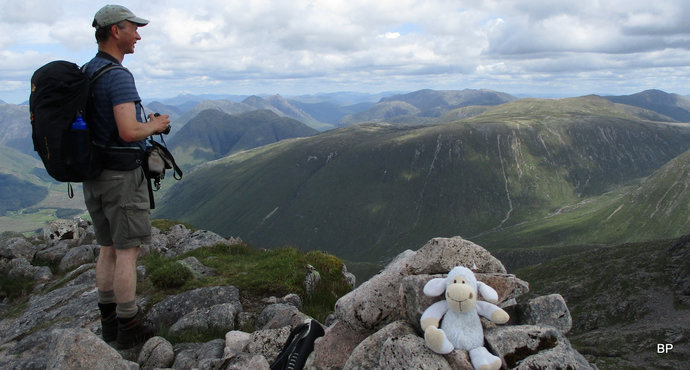 It was midday so we decided to take a longer break and have lunch, before continuing the traverse. We sat faicng the best views, west to Loch Etive and Beinn Trillieachan: 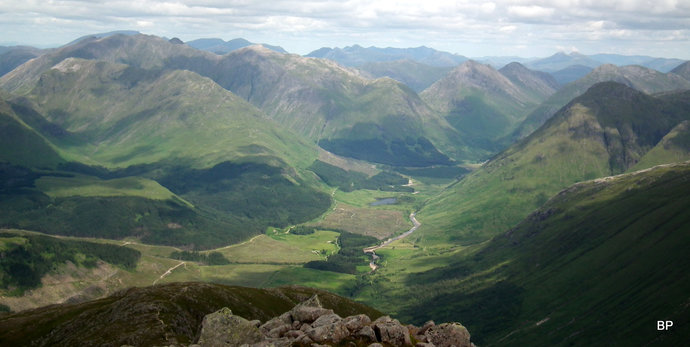 Of course, as soon as I sniffed the rocky ridge leading to Stob Coire Dheirg, no power on this earth could stop me!

The wind picked up when we were sitting on the summit of Starav and suddenly cloud started to gather, but at the moment a potential storm was still miles away, so we chose to ignore the cloud and just have fun: 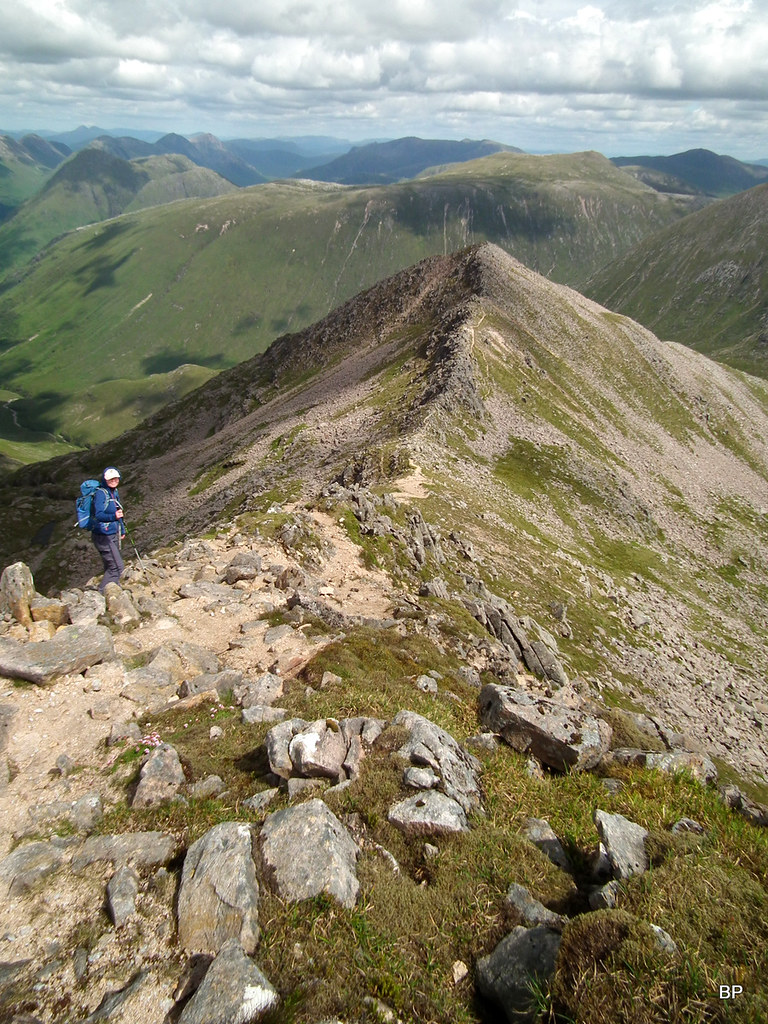 2019-07-08 ben starav 105 by Ewa Dalziel, on Flickr
Panoramic snap of the little arete leading to Stob Coire Dheirg - a mini version of CMD arete I should say: 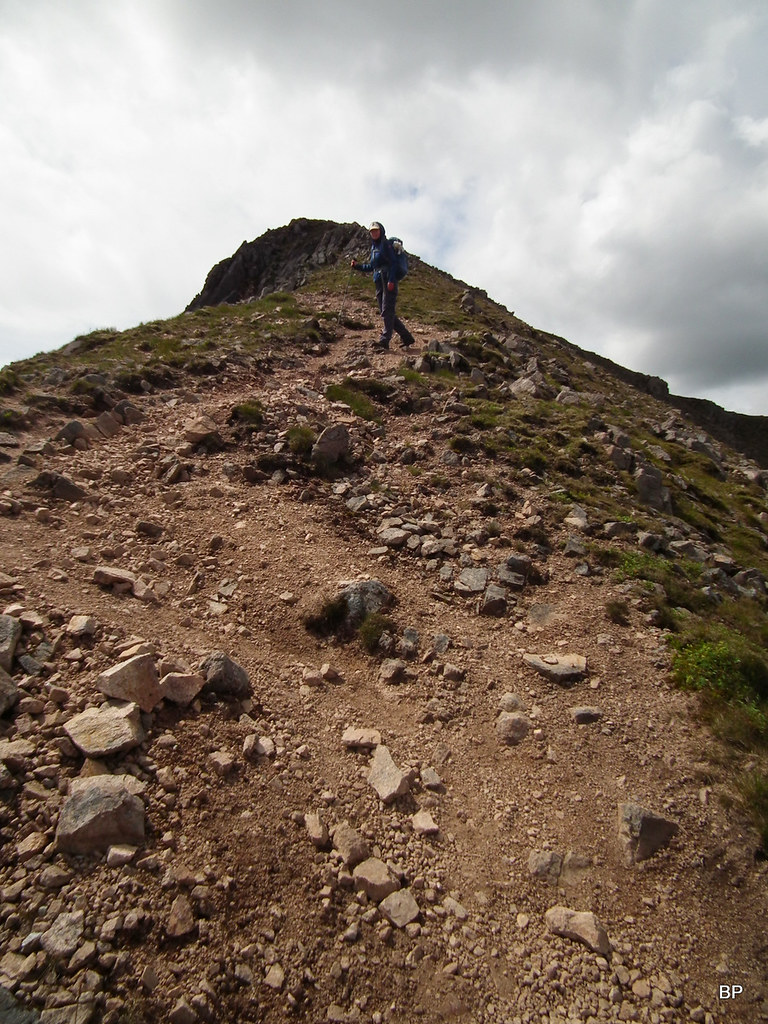 2019-07-08 ben starav 109 by Ewa Dalziel, on Flickr
The rocky crest can be bypassed on a path just below it to the right, but we had no intention of using the chicken's route 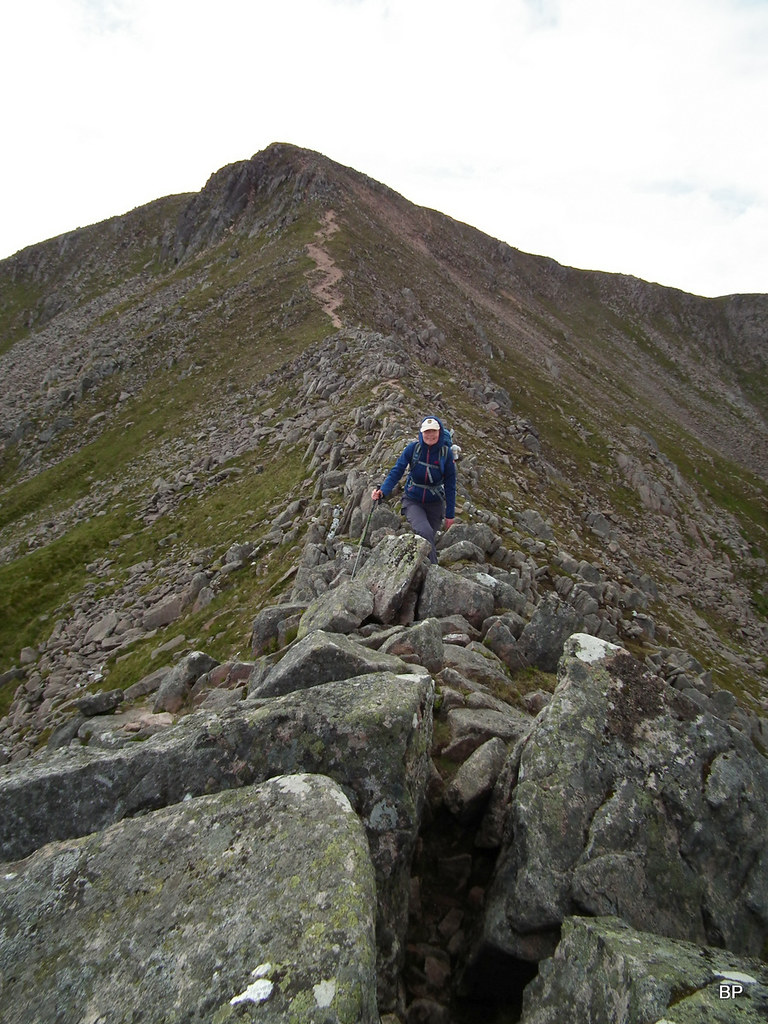 2019-07-08 ben starav 114 by Ewa Dalziel, on Flickr
We took our time, enjoying the boulder-hopping experience. Probably qualifies as mild scrambling: 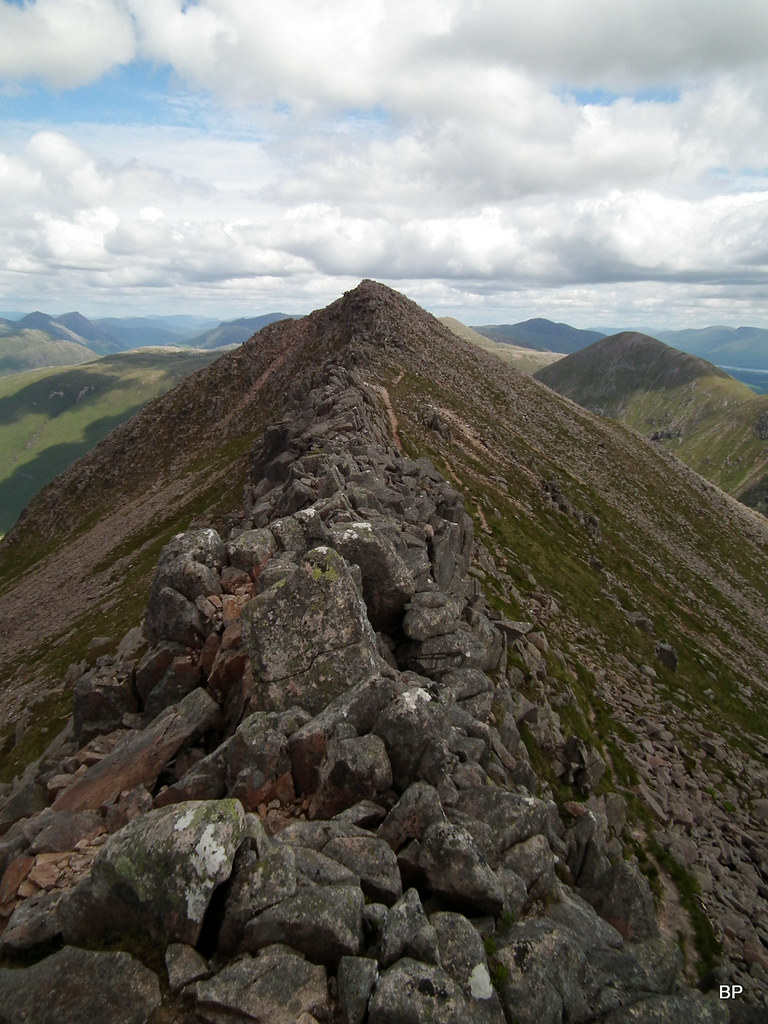 2019-07-08 ben starav 116 by Ewa Dalziel, on Flickr
From Stob Coire Dheirg, we scrutinized the remaining ridge leading to the second Munro - it's virtually follow-an-obvious-path routine, but the views are tremendous: 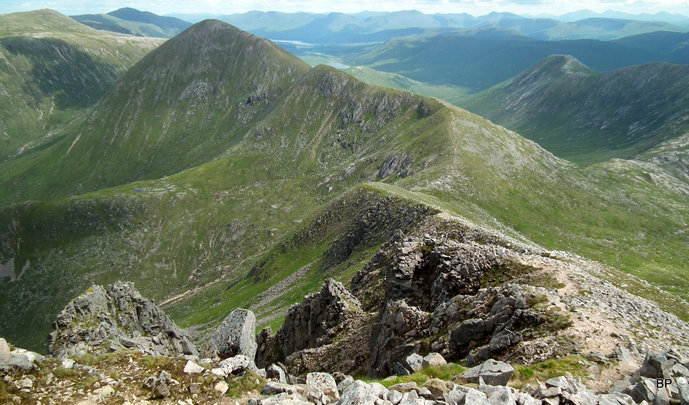 Looking into lower Glen Etive from the summit of Stob Coire Dheirg: 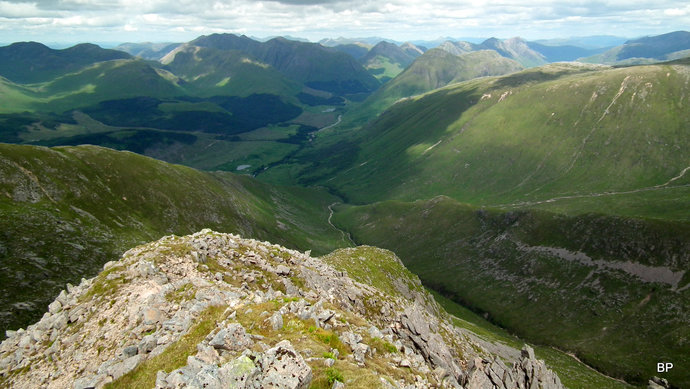 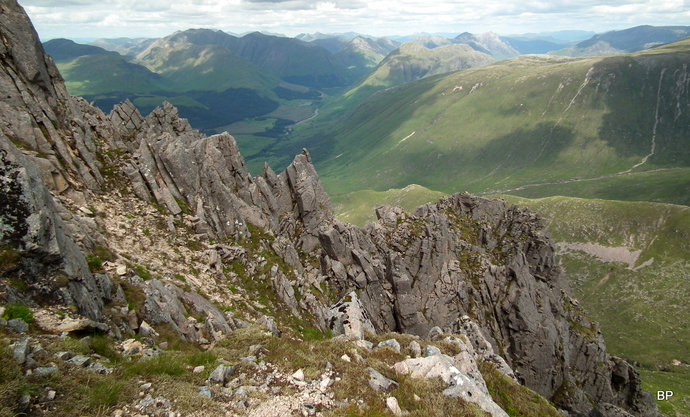 The white line of quartzite from the distance looks almost like a waterfall: We descended to the next col (Bealachan Lochain Ghaineamhaich - no way I can pronounce it!) and examined the northern face of Beinn nan Aighenan - the last Munro on this area still to-do. I don't know yet which route we will choose for this one (the long walk-in from Loch Tulla is still taken under consideration) but it definitely will not be left as our final M!

At the moment, we were concentrating on our current route, heading for the minor top, Meall na Tri Tighearean: At some point we thought the cloud would boil up to a thunderstorm, but we were lucky, it simply passed over without even a single drop of rain. When we reached the summit of the second Munro, we had time for a few minutes of rest by the cairn. For me, no. 259 ticked! For Lucy, no. 117: 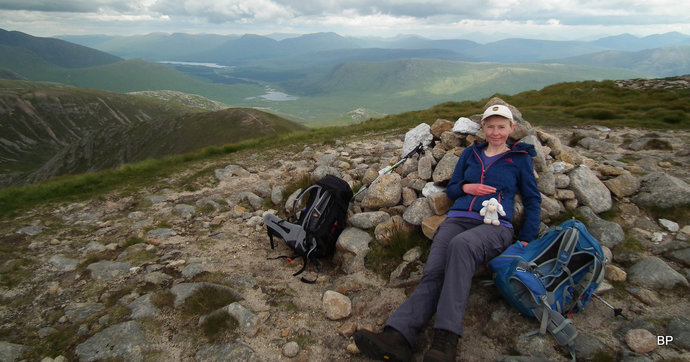 Our way down, a path descending to Coire Odhar: 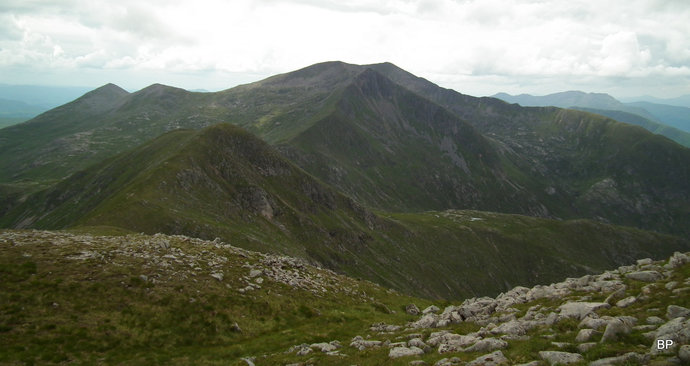 A single painted lady butterfly showed up and stayed with us for the time we spent on the summit, we even managed a few decent photos: 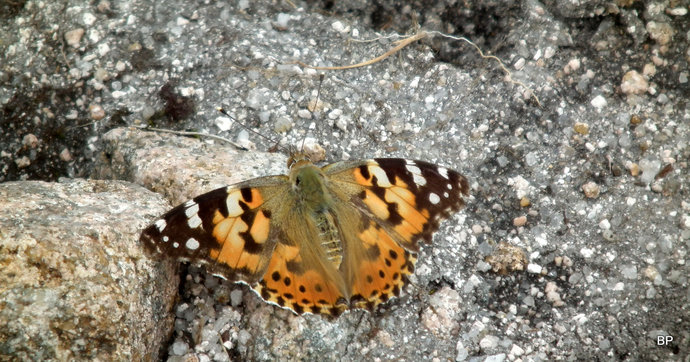 Eventually, we headed down, descending on an obvious path to the 738m col at the top of Coire Odhar, then along Allt Mheuran into the corrie itself: 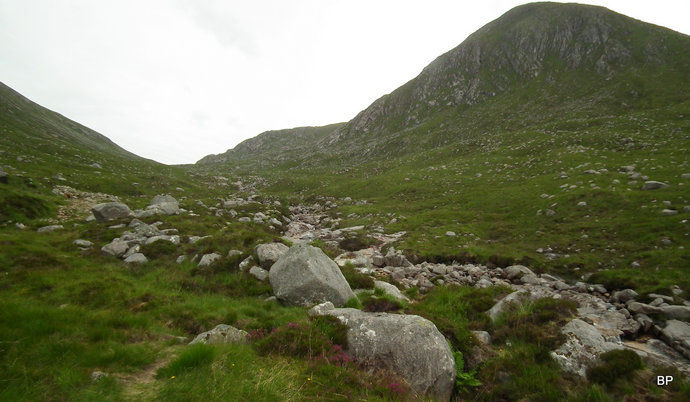 We suffered through the final, boggy stage of the descent, and reached the bridge over River Etive tired but happy. One more fantastic trip, two more Munros in the bag. What else could we ask for?
.....................
We will definitely return here for some kind of winter (or early spring) climb. Plus of course Beinn nan Aighenan, now the single red balloon on our bagging map in this area. We're slowly chewing our way through the list of Etive mountains and before the end of holiday we returned to this corner for an extra Corbett, but that will be a subject of a separate report.
....................
The next two days were c**p weather-wise, but on Thursday we visited Plockton and educated ourselves in botany, conchology and how to find the best viewpoint after heavy rain. TR in progress.

But definitely worth it once you get there!

But definitely worth it once you get there!

The neverending march up, then a lesson in boulder hopping

But once on the ridge - fantastic. The little "arete" between Starav summit and the lower top was my favourite part!

I was hoping for Beinn nan Aighenan last weekend, weather on Saturday was good, but Kevin still had issues with his back injury (it got worse after WH meet) so I didn't want to push him too far, we ended up on Meall Tairbh above Loch Tulla, a fine little traverse with great views.